Highlights of this issue #210

A rich training programme awaits you in ChessBase Magazine #210! On the starting page the editors a selection of recommendations: 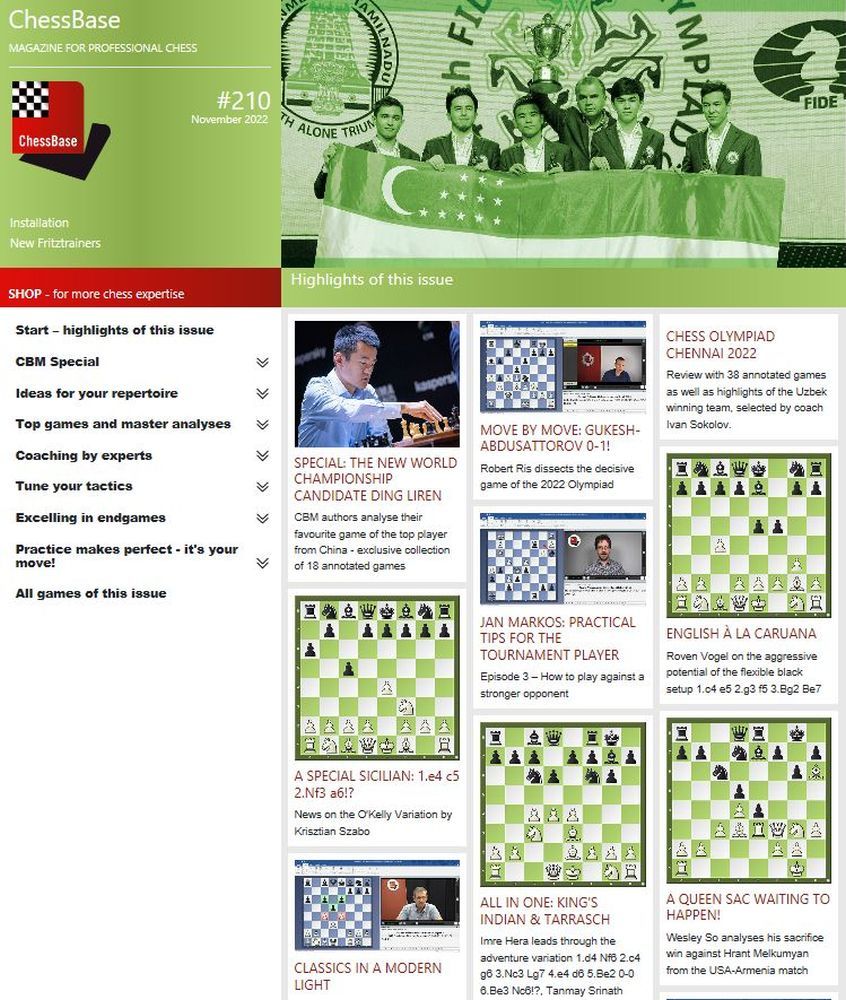 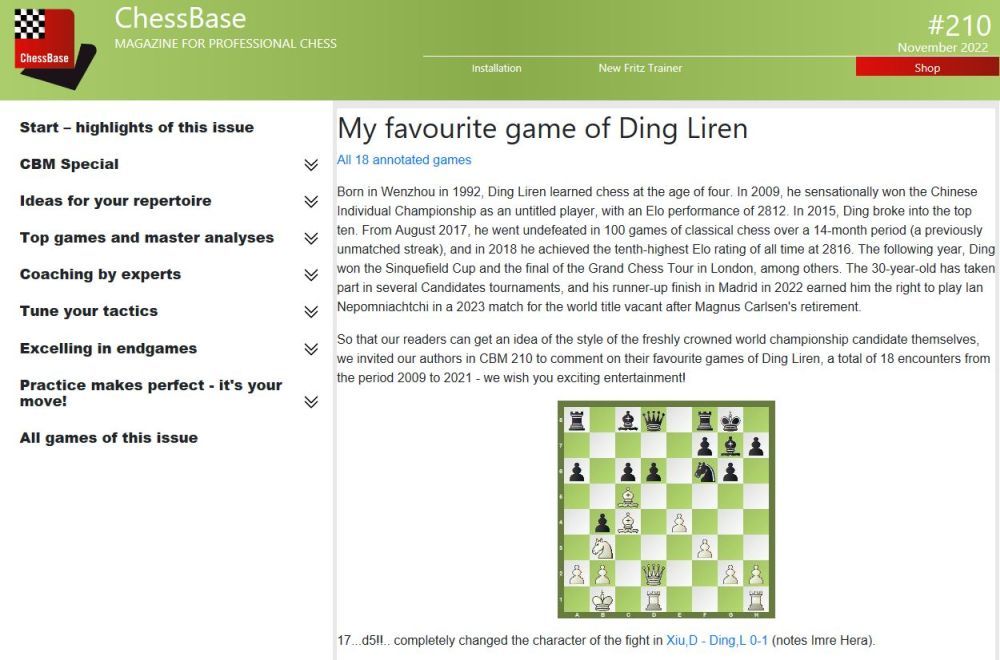 CBM authors analyse their favourite games of the top player from China. Look forward to an exclusive collection of 18 annotated games! 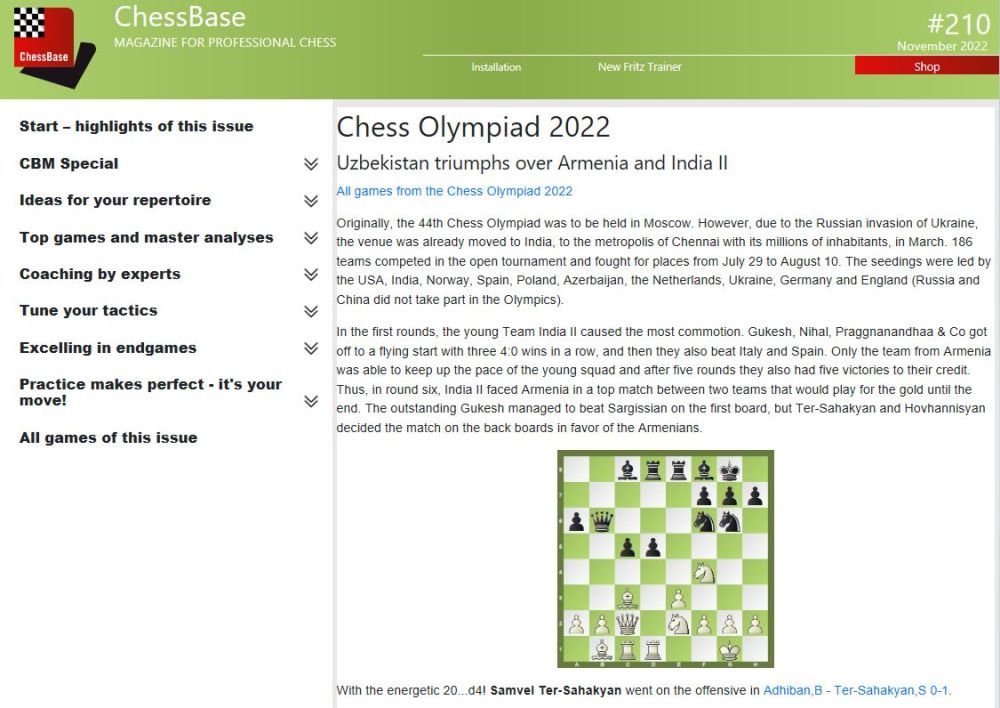 Chess Olympiad 2022: The major event of the year with 186 teams in the Open Tournament is the focus of this issue. Over 20 participants comment on their best games from Chennai, including Praggnanandhaa, Anish Giri, Wesley So, Arjun Erigaisi, Jules Moussard, Luke McShane, Pentala Harikrishna, Matthias Blübaum, Maxime Lagarde, Rasmus Svane, Viktor Erdos, the silver medal team from Armenia and the gold medallists in the women's tournament, Anna and Mariya Muzychuk. Moreover, the coach of the winning Uzbek team, Ivan Sokolov, presents highlights of his young team in his article "Steps to Gold".

Practical tips for the tournament player 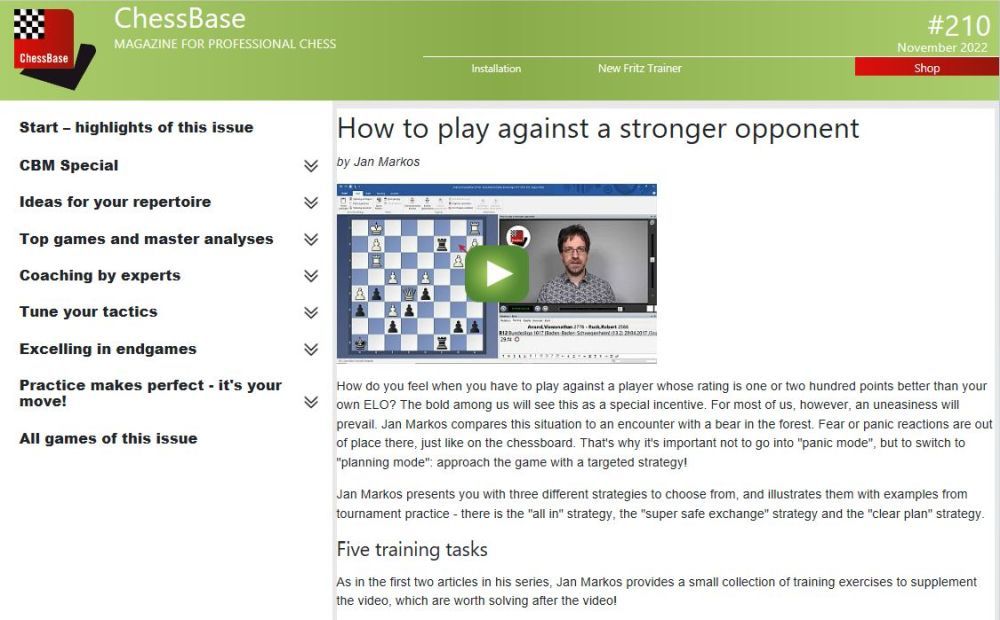 How would you behave if you encountered a bear in the forest? Correct: You try not to panic. What you need is a plan. And it's the same in chess when you have to play against a much stronger opponent! In the third part of his series, GM Jan Markos presents three strategies for this kind of situation and rounds off his contribution with a small collection of exercises. 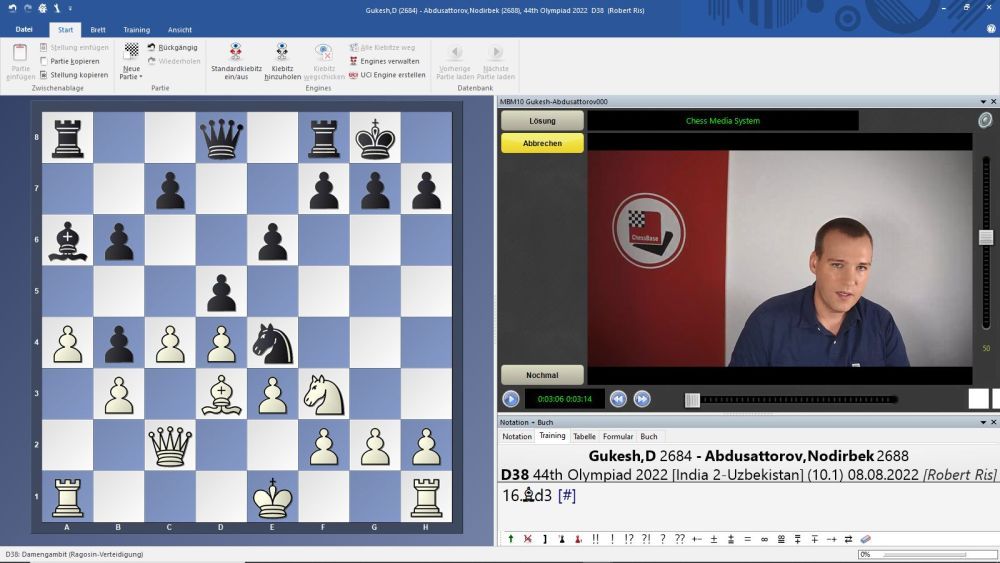 The game Gukesh-Abdusattorov played a key role in the fight for medals in Chennai. Replay it in interactive training format with IM Robert Ris! 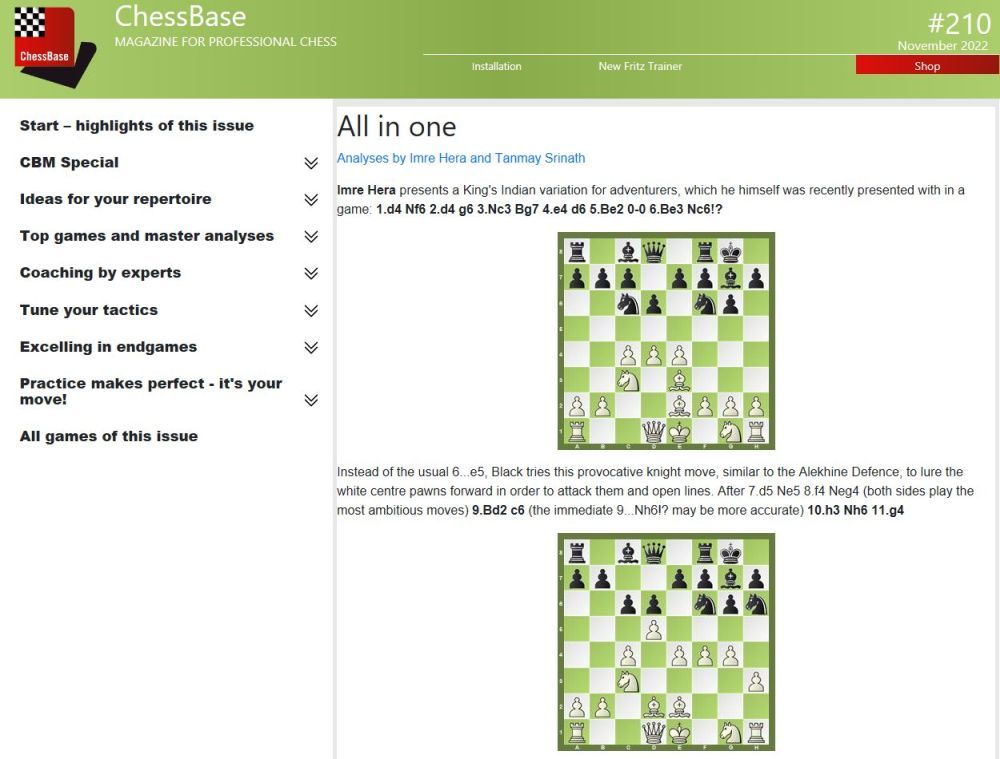 New opening ideas explained on the basis of one game with detailed commentary. In this issue: King's Indian (Imre Hera) and English (Tanmay Srinath). 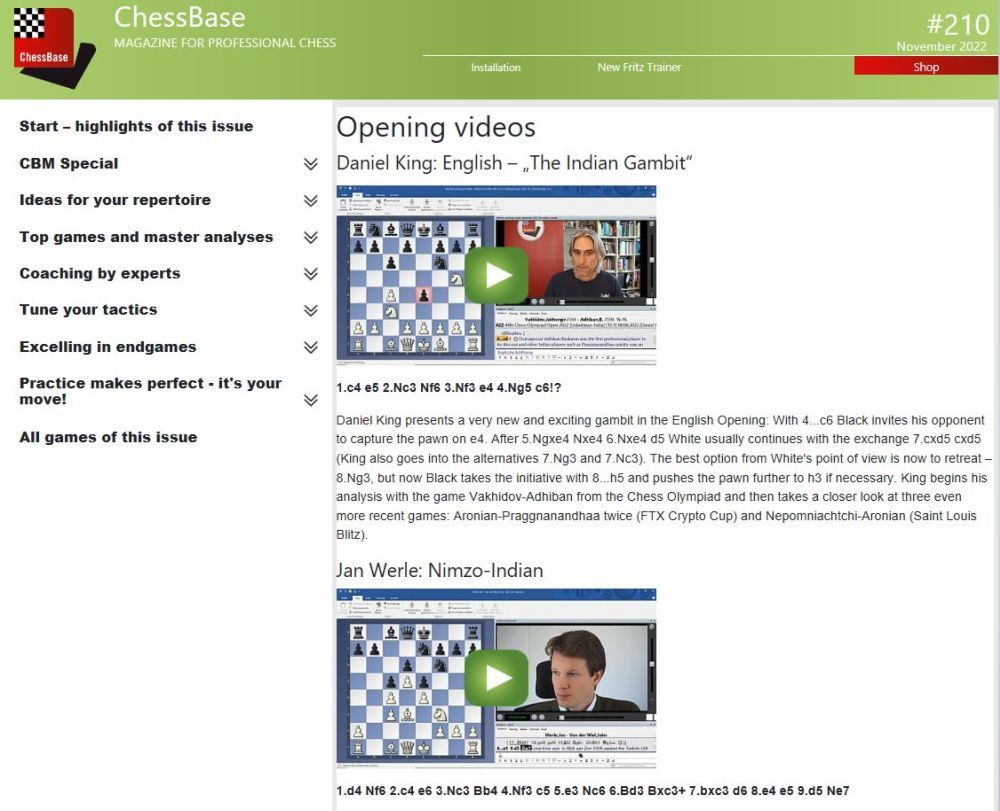 Daniel King presents a fresh and exciting gambit in the English Opening. Jan Werle explains positional ideas in the Rubinstein Variation of the Nimzo Indian. And Mihail Marin has come across the novelty 14...a5! in a game of the Benoni expert Aleksandar Indjic at the Olympiad. 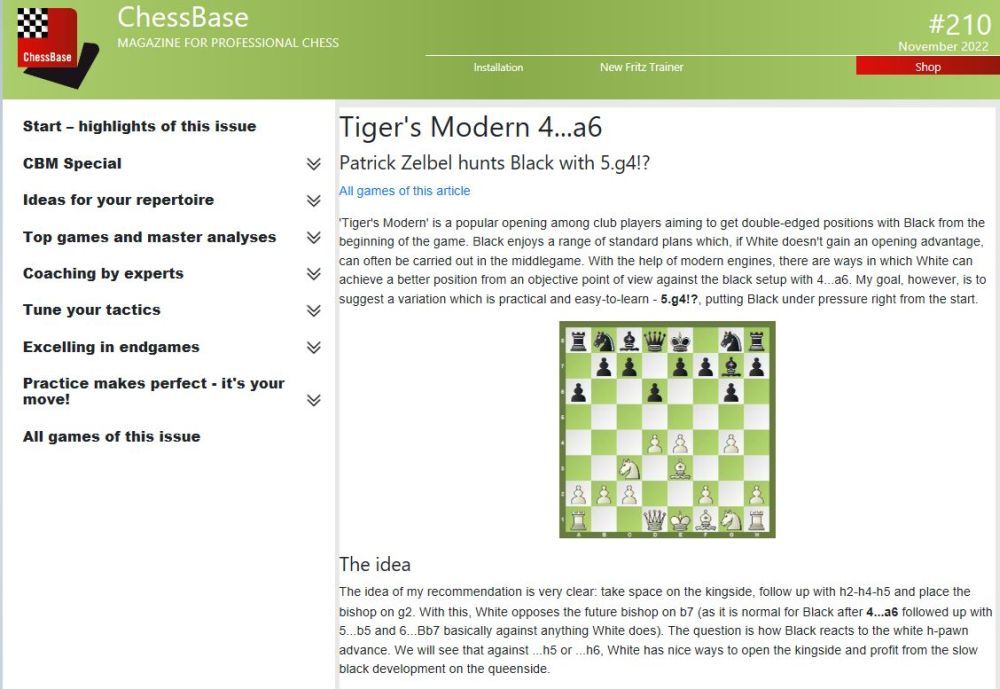 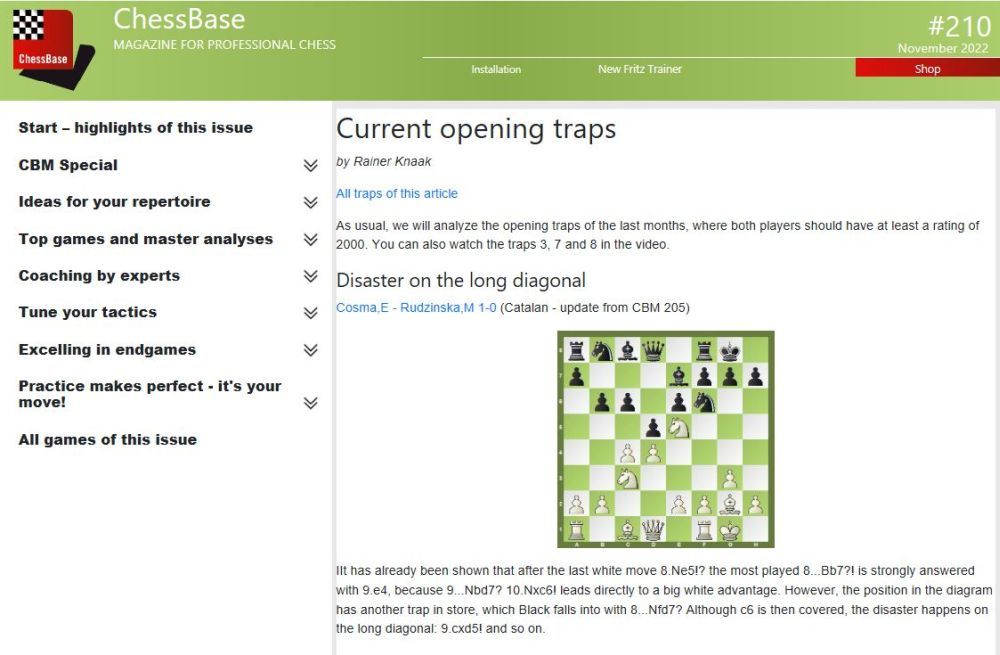 "From the London System to the Ruy Lopez". The expert Rainer Knaak presents eight traps with detailed analyses and three videos. 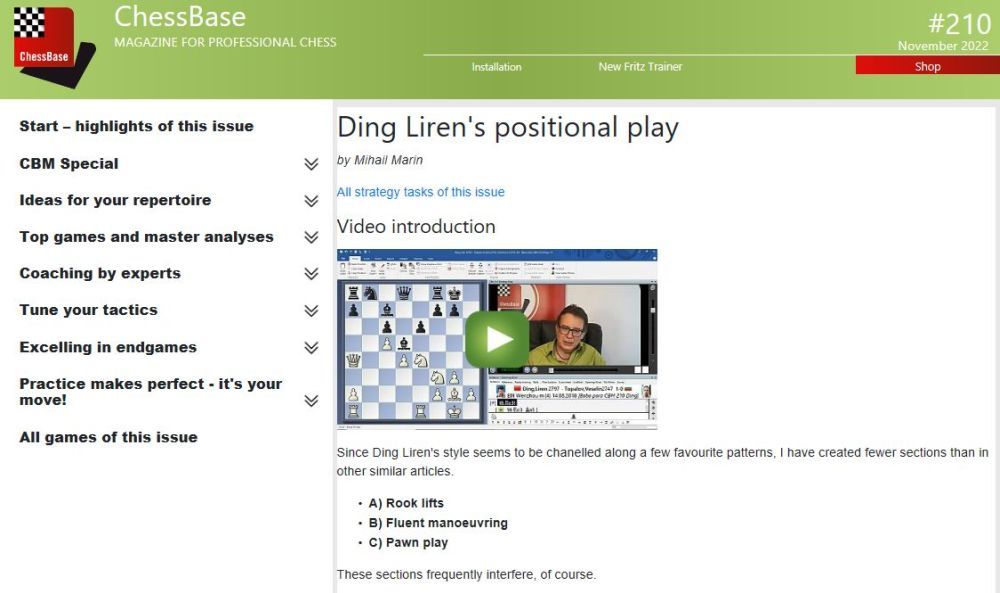 Mihail Marin sheds light on aspects of Ding's play - his “typical rook lifts” and also his play with the pawns. Incl. video introduction and many training exercises. 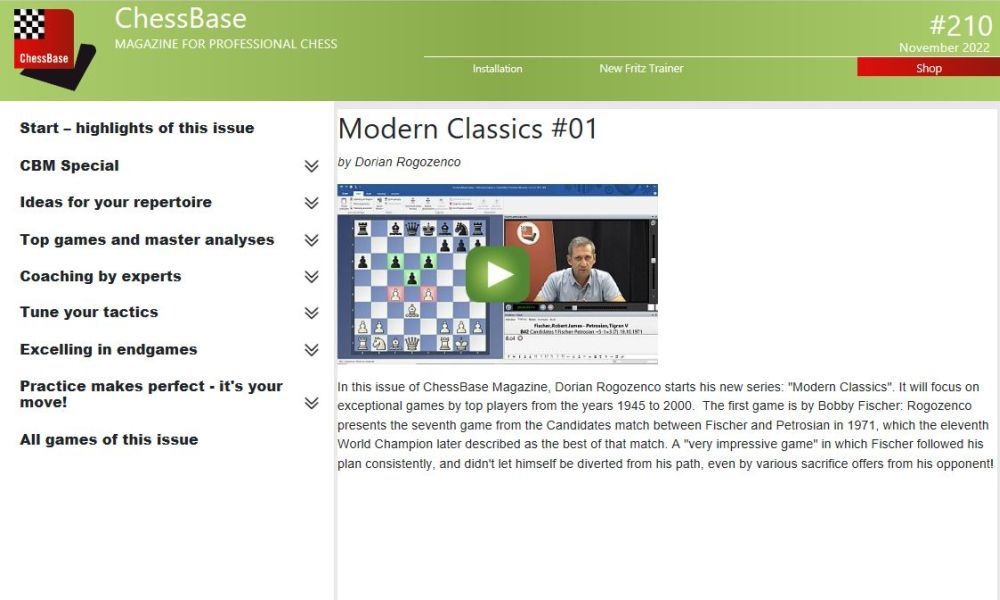 Dorian Rogozenco starts his new series in a befitting manner - Bobby Fischer himself described the 7th game against Petrosian as the best of their 1971 Candidates Match. 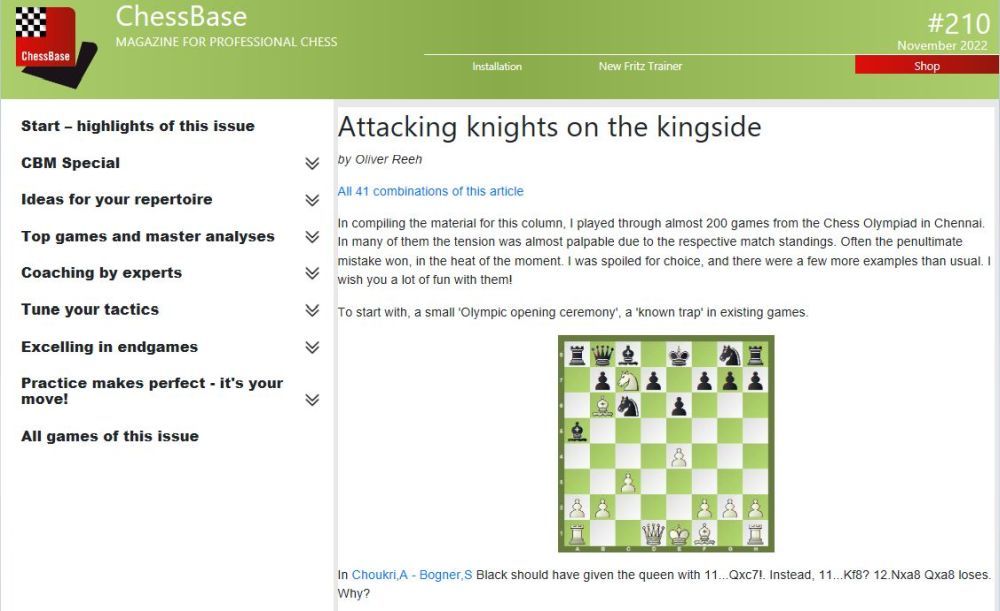 Oliver Reeh's yield from the Chess Olympiad is abundant: 41 games, peppered with many tactical exercises, await you. Don't miss the chance to solve his favourite combinations, move by move in interactive video format!

"Endgame highlights by Ding Liren" and much more! 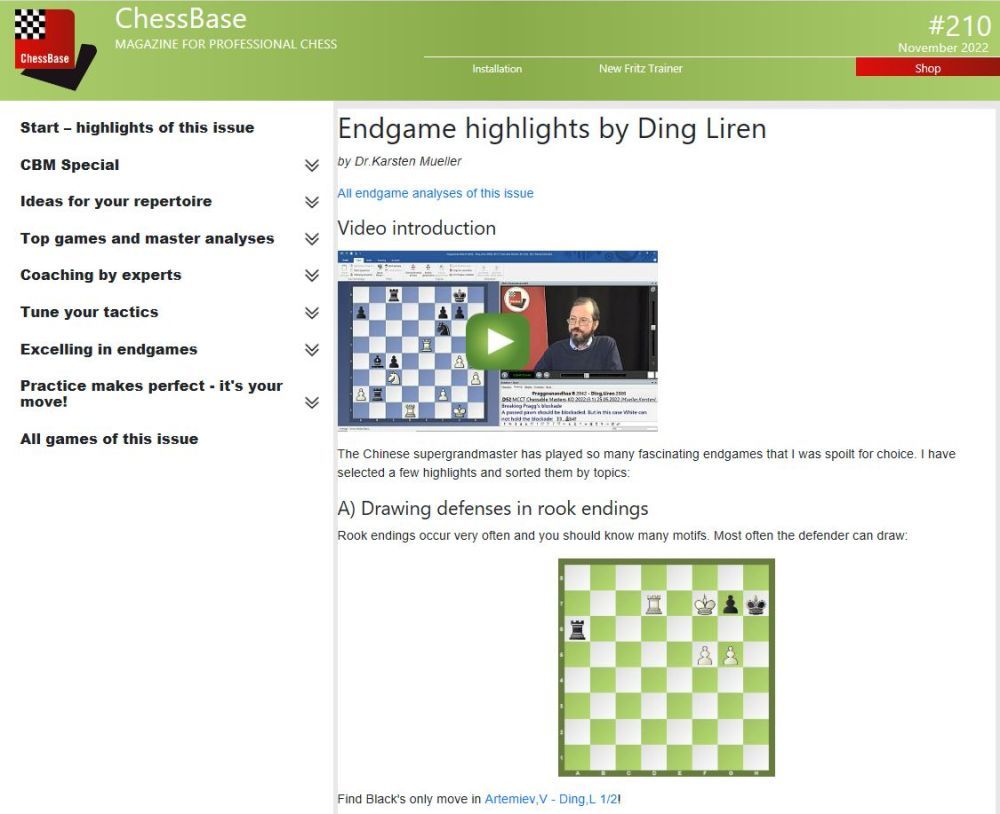 This issue offers no less than four articles by Karsten Mueller. In addition to the article on Ding Liren, the expert also presents the most beautiful endgames from the 2022 Chess Olympiad. Moreover, Mueller provides a collection of training tasks and answers the letters to the editor in detail as usual. 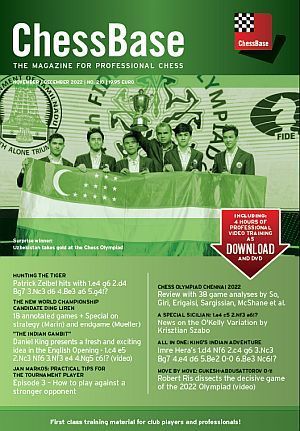