ChessBase Magazine is the most comprehensive and most sophisticated chess magazine there is. World class players analyze their brilliancies and explain the ideas behind the moves to you, opening specialists present the latest trends in opening theory and offer exciting ideas for your repertoire. Master trainers in the fields of tactics, strategy, and the endgame show you the tricks and techniques a successful tournament player needs! Digital DVD with several hours of video to learn and train. Top GMs like Nepomniachtchi, Giri, Duda, Kasimdzhanov, Michal Krasenkow, Romain Edouard, Mihail Marin, Endgame expert Karsten Muller and many more. Photo: ChessBase

Highlights of this issue #202 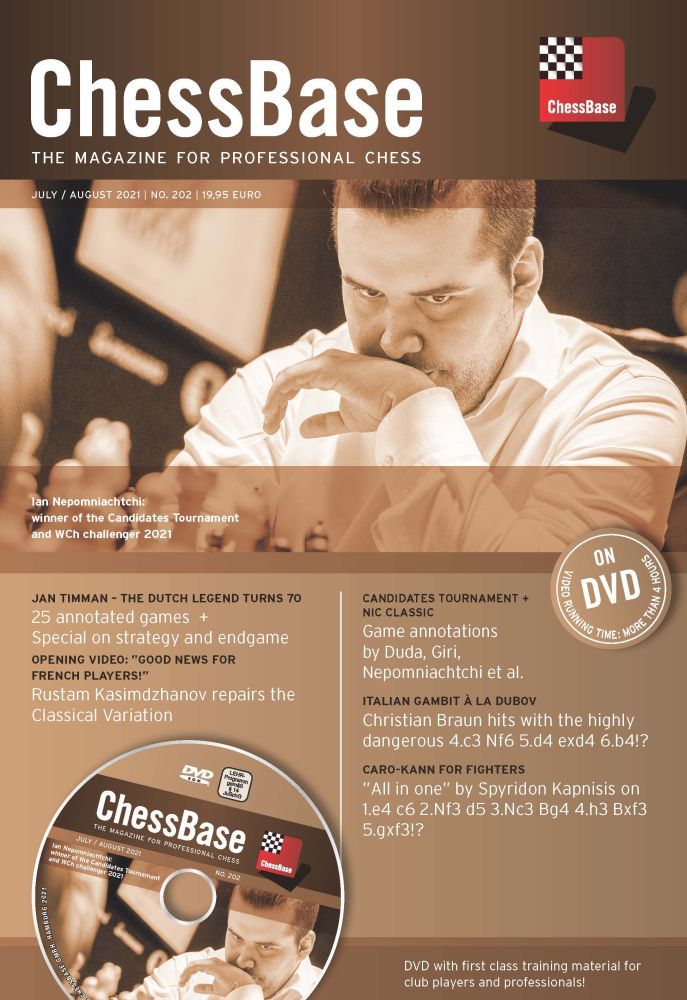 Bogo-Indian: no respite for Black!

Among other things, the Dutchman annotates his impressive victory over Liren Ding

Frighten your opponent – with the Halloween Gambit!

Reversed Sicilian: d2-d4 in one go! 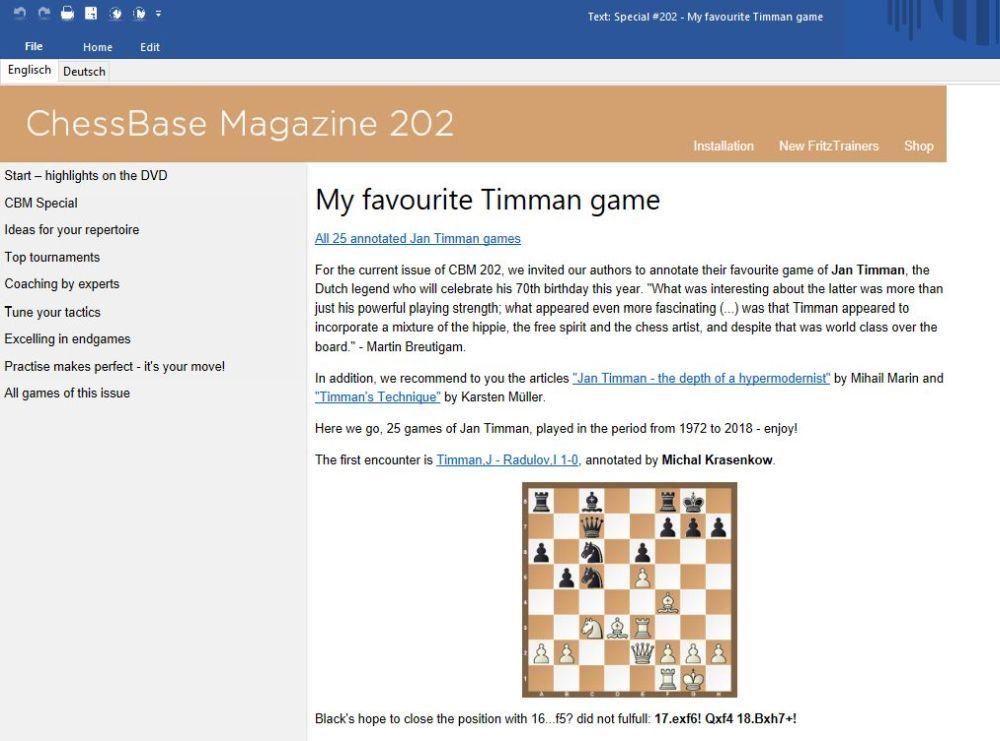 CBM authors present their favourite game by the Dutch GM, who 30 years ago was a part of the absolute world elite and who lost out twice in the Candidates finals (1990 against Karpov and 1992 to Short). Contributions to this exclusive collection have come from, e.g. David Navara, Adhiban Baskaran, Yannick Pelletier, Krishnan Sasikiran and Imre Hera. 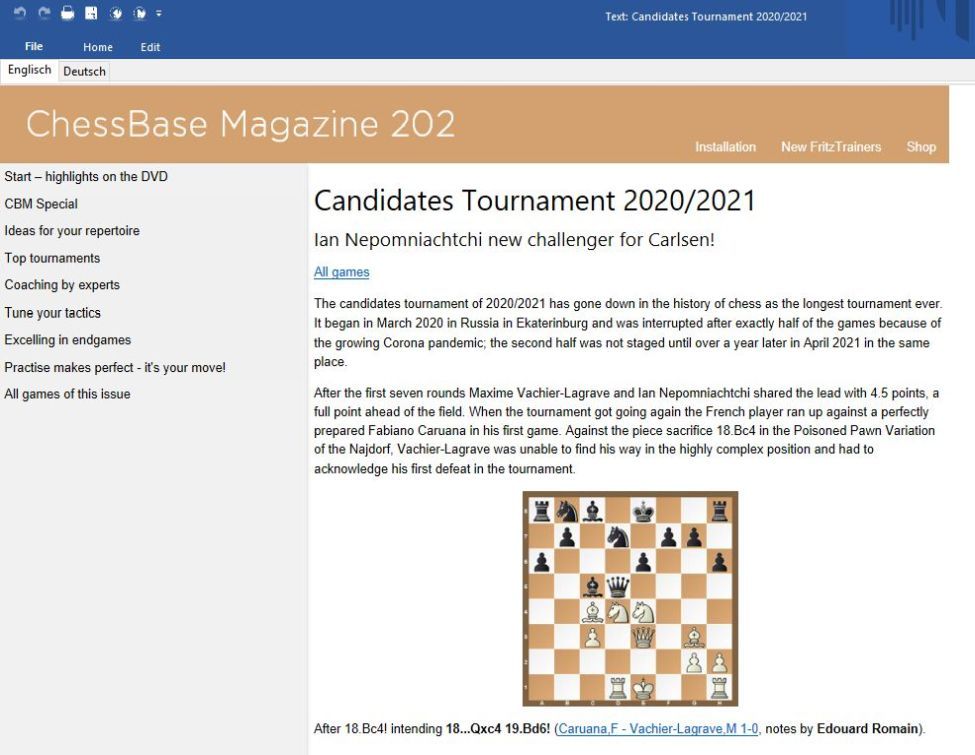 Ian Nepomniachtchi, the winner of the Candidates Tournament and new challenger of Magnus Carlsen, comments on his game against Wang Hao. Further analyses by Anish Giri. Romain Edouard and Michal Krasenkow in their analyses focus on the most important moments and the most beautiful games. 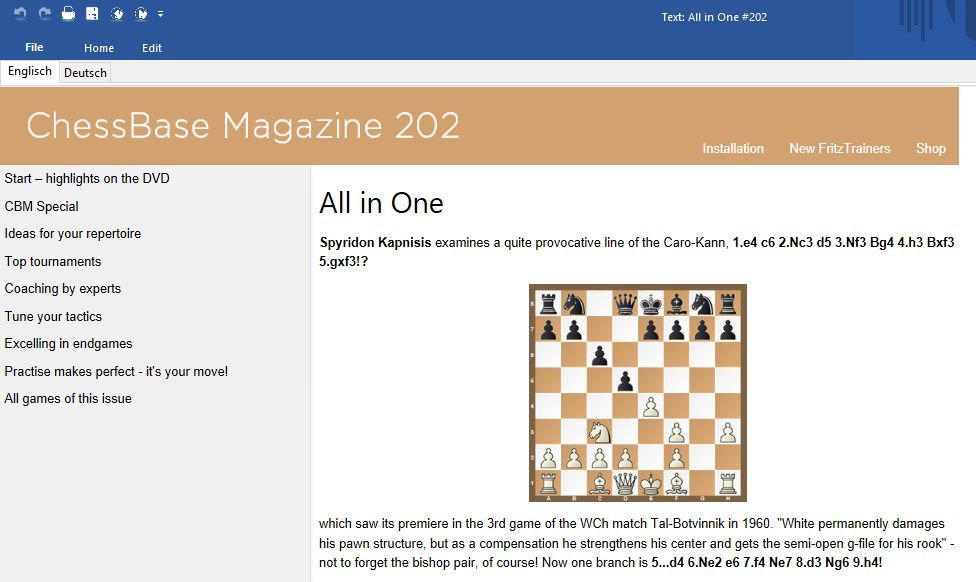 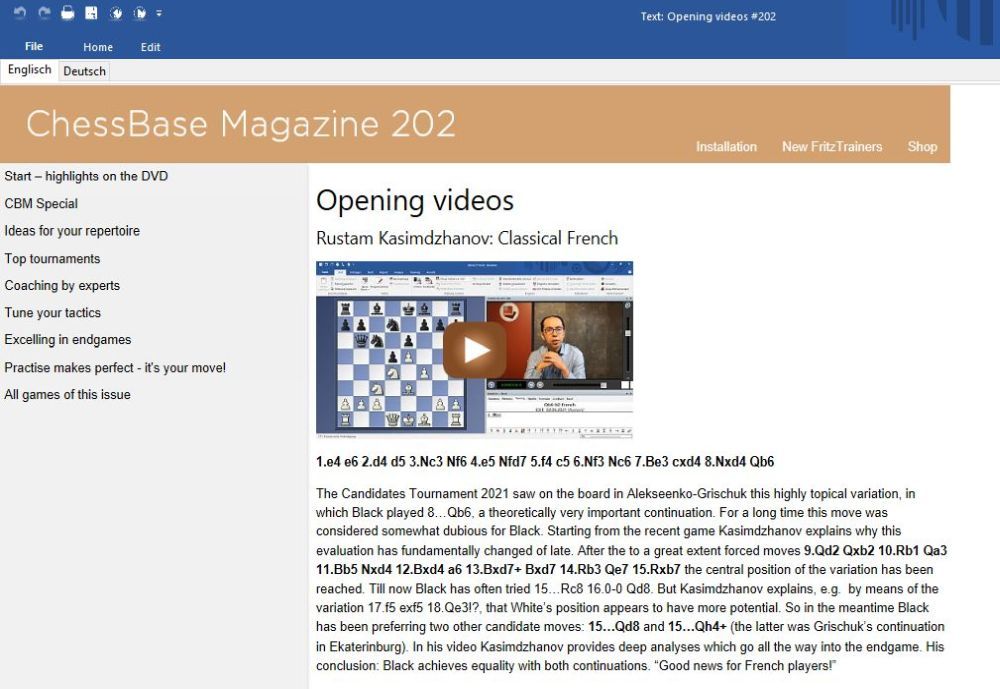 Rustam Kasimdzhanov uses the game Alekseenko-Grischuk from the Candidats Tournament to show the latest developments in the Classical French with 8...Qb6. Mihail Marin celebrates Jan Timman's analytical skills (1986 against Karpov) and highlights a "Fingerfehler" from 1960 with explosive power for current Grünfeld theory. A novelty on move three? Daniel King scrutinizes 3...Ne7 in the Albin Countergambit. 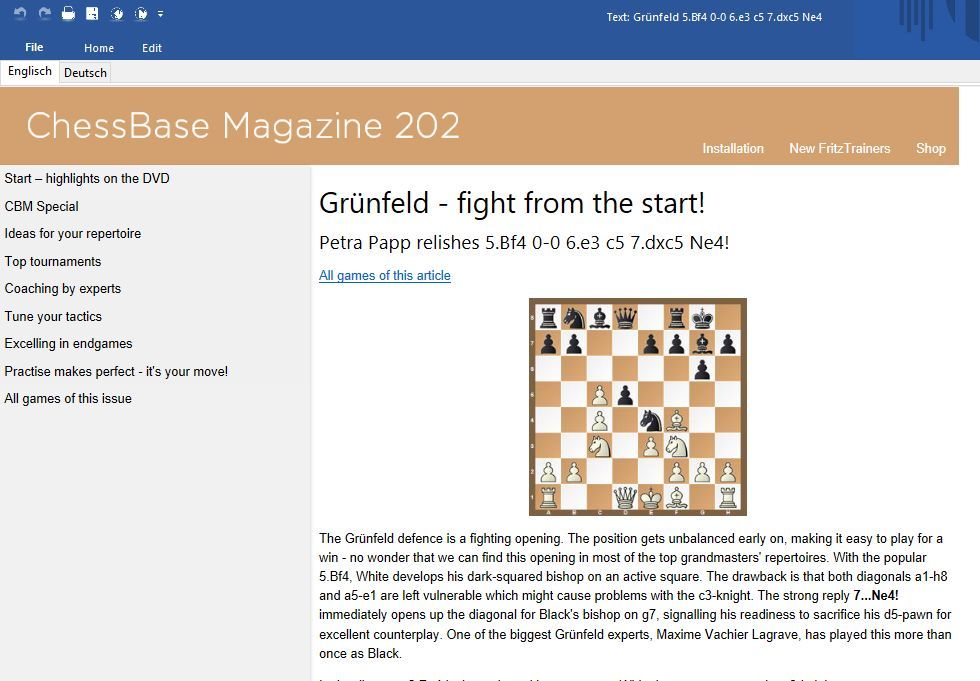 With 11 opening articles, CBM #202 offers many exciting ideas and recommendations: 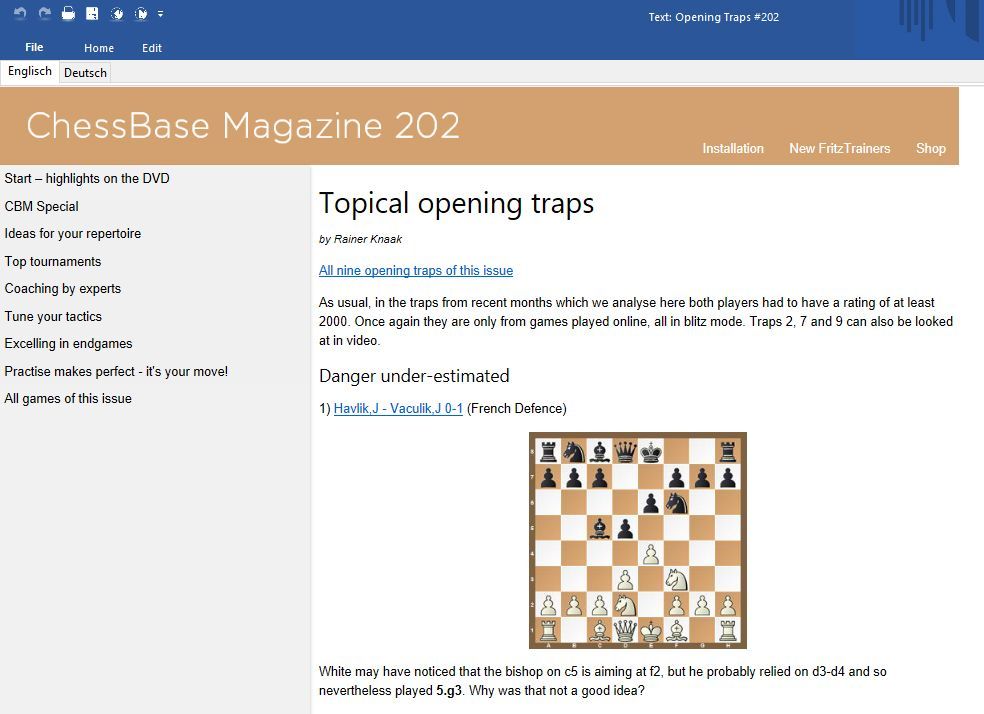 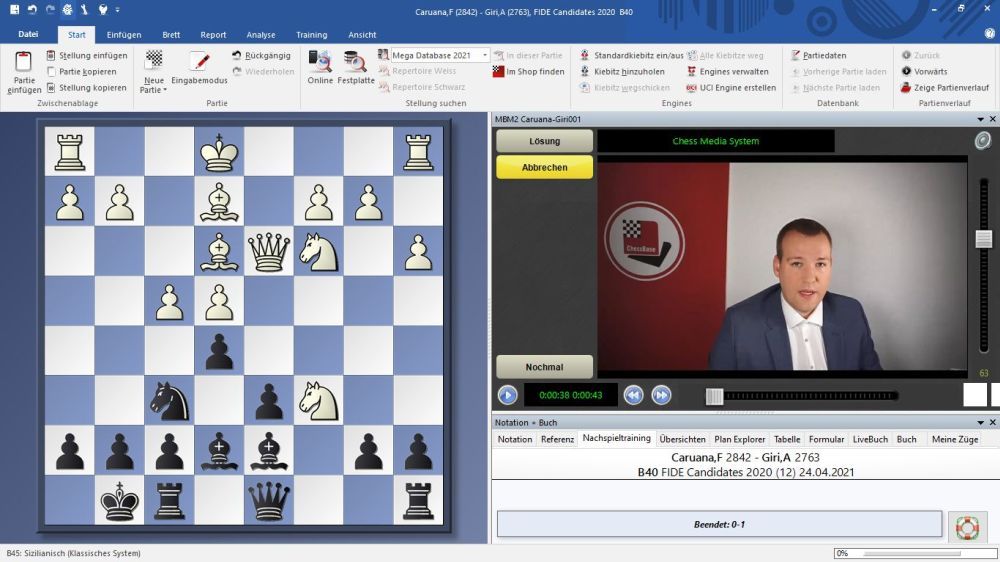 The game Fabiano Caruana vs. Anish Giri from the Candidates Tournament 2020/2021 was a positionally brilliant performance by the young Dutch player. Play through the game interactively in video format with Robert Ris and try to find for yourself the master’s moves over the board!

Jan Timman – the depth of a hypomodernist 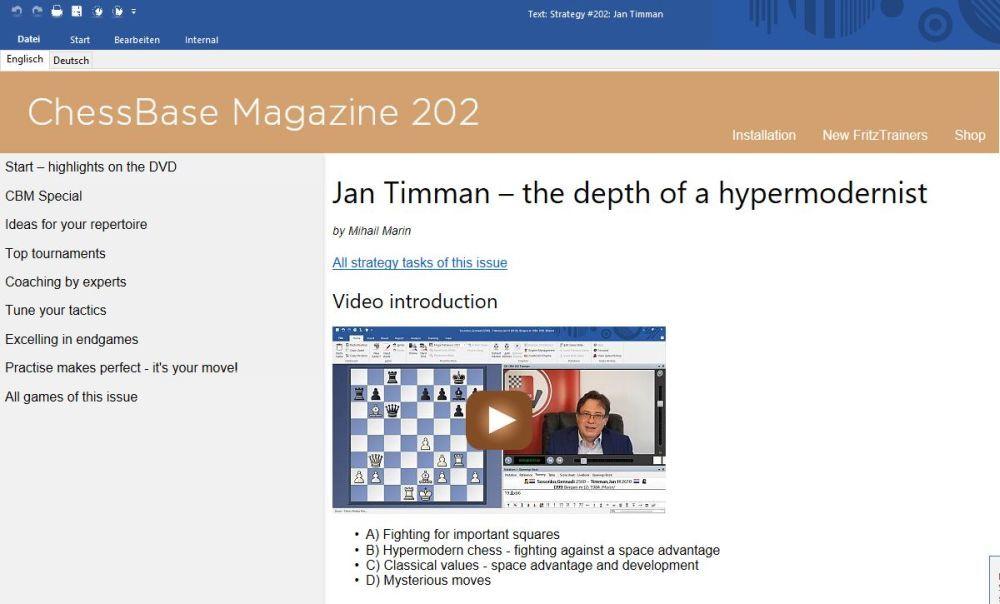 According to the "Special" of the issue, strategy expert Mihail Marin examines various aspects of Jan Timman's play - from "the struggle for important squares" to "mysterious moves". Including an introductory video with over half an hour of playing time! 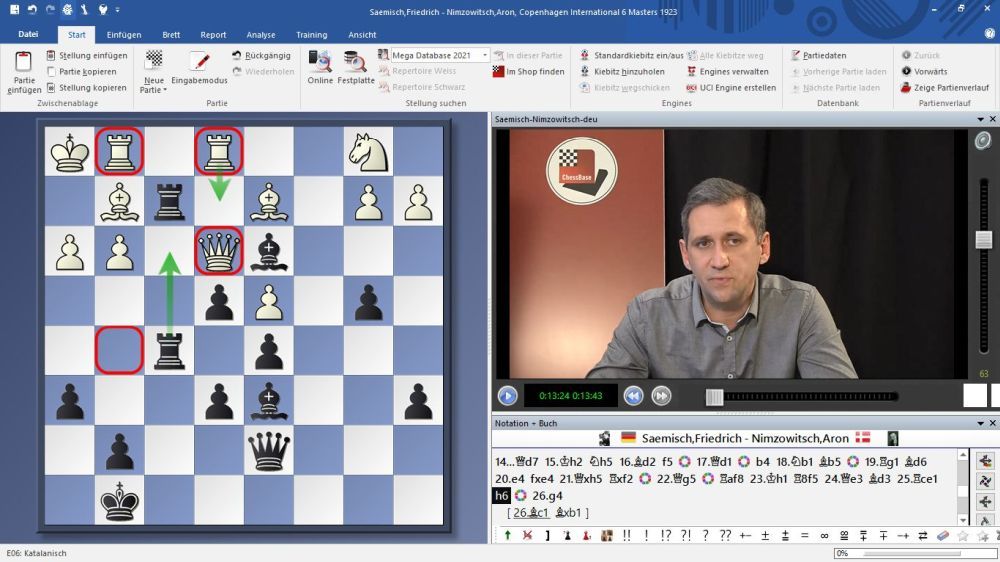 The previous federal German trainer demonstrates in Sämisch-Nimzowitsch (1923) the “Immortal Zugzwang Game” – something to delight not only fans of the Classic! 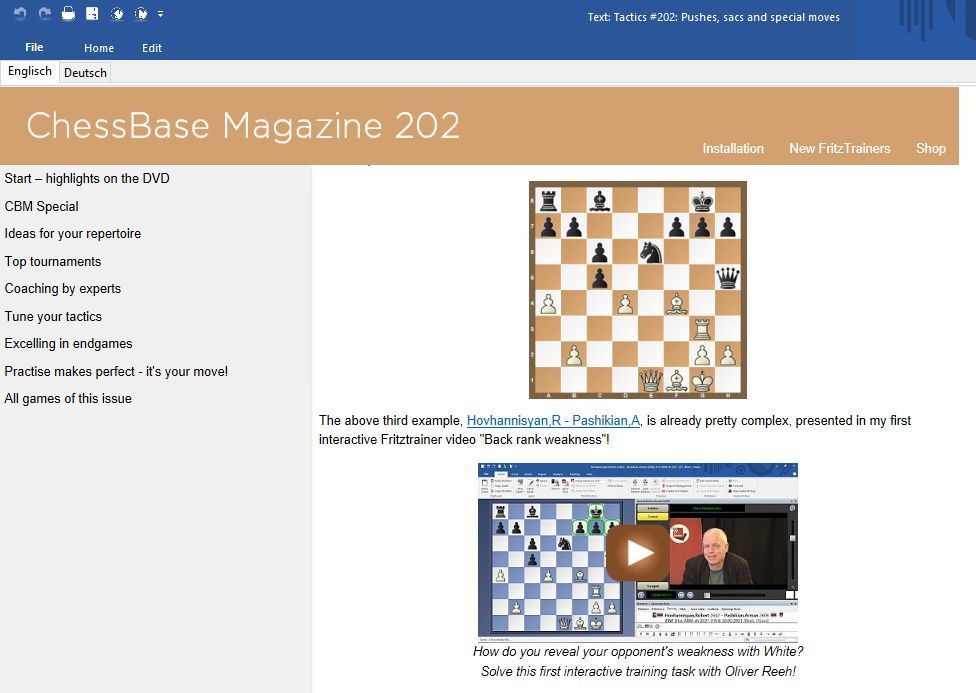 Excelling in endgames: From "Timman’s Technique" to endgame highlights of the Candidates Tournament 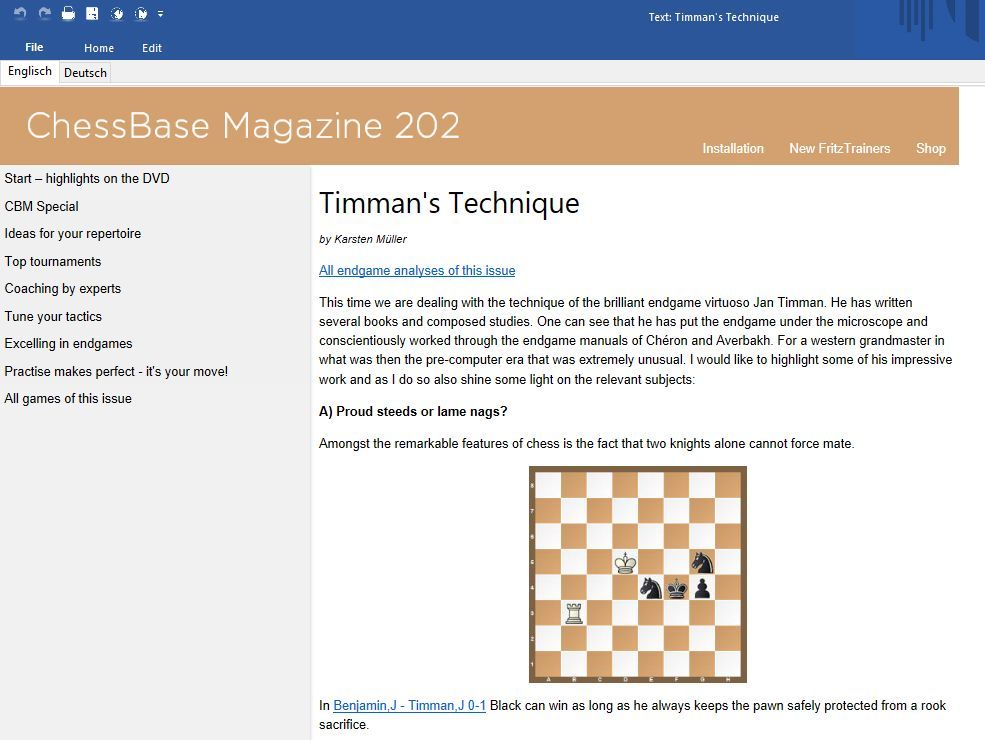 In no less than four articles Karsten Müller again delivers a plethora of endgame analyses. In addition to the article on "Timman's Technique" the “Endgames from the Candidates Tournament” are a highlight of this issue!