The "Special" in the new ChessBase Magazine #205 is dedicated to Robert Huebner, the best German player since Emanuel Lasker: an exclusive collection of 16 games, with analyses by Michal Krasenkow, Romain Edouard, Viktor Moskalenko, and others. And there's the best of the FIDE Grand Swiss 2021: tournament winner Alireza Firouzja annotates his victory against Nijat Abasov, and Grigoriy Oparin, Yu Yangyi, Alexandr Predke, Samuel Sevian, Nikita Vitiugov, and others annotate their best games. In a video Markus Ragger reveals a brand-new update in the Gruenfeld Defence with 5.Bd2. Plus 11 opening articles ("Surprise in the London System: 6...e5!", "Benko Gambit with open centre: 5.b6 e6!?", "News in the French Tarrasch: 8...g5" ), as well as training columns on tactics, strategy and endgame. Photo: ChessBase

Highlights of this issue #205

On the front page of ChessBase Magazine #205 you will find the special recommendations of the editors - the highlights of the issue to click on and enjoy! 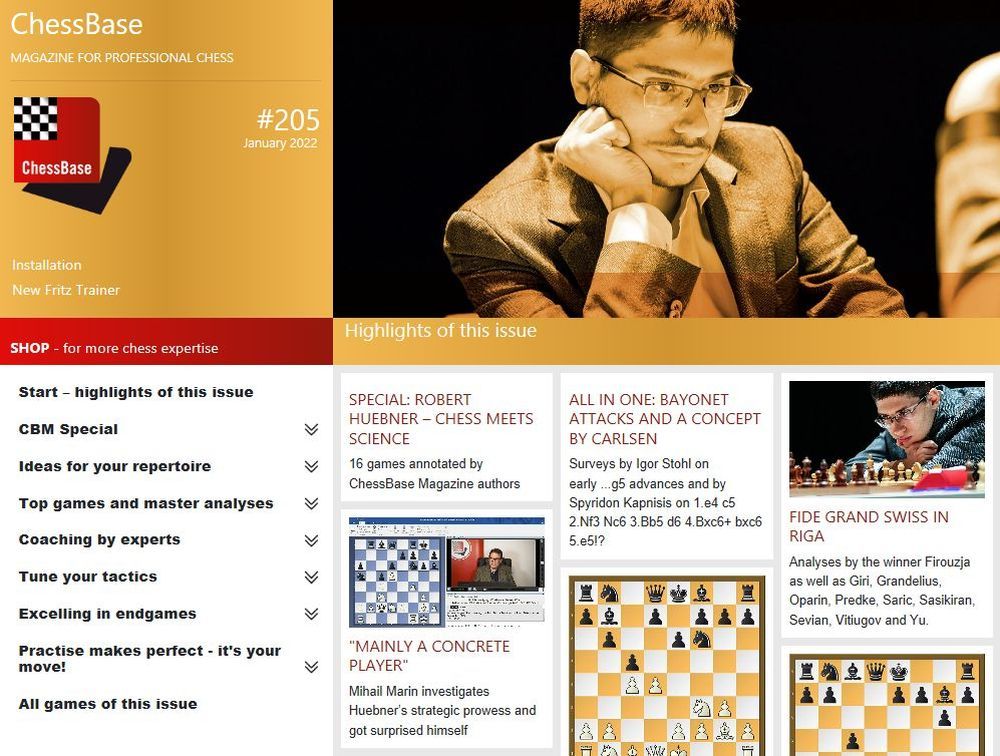 Analyses from the FIDE Grand Swiss 2021 by the winner Alireza Firouzja as well as from Grigoriy Oparin, Yu Yangyi, Alexandr Predke, Samuel Sevian, Nikita Vitiugov and others. A class of its own: Anish Giri comments on his spectacular Black victory over Abhijeet Gupta from the Chess Super League. Or how about a surprise weapon against the popular London System? Sergey Grigoriants explains the ideas and variations after 6...e5! Don't miss the interactive training sessions with Robert Ris! 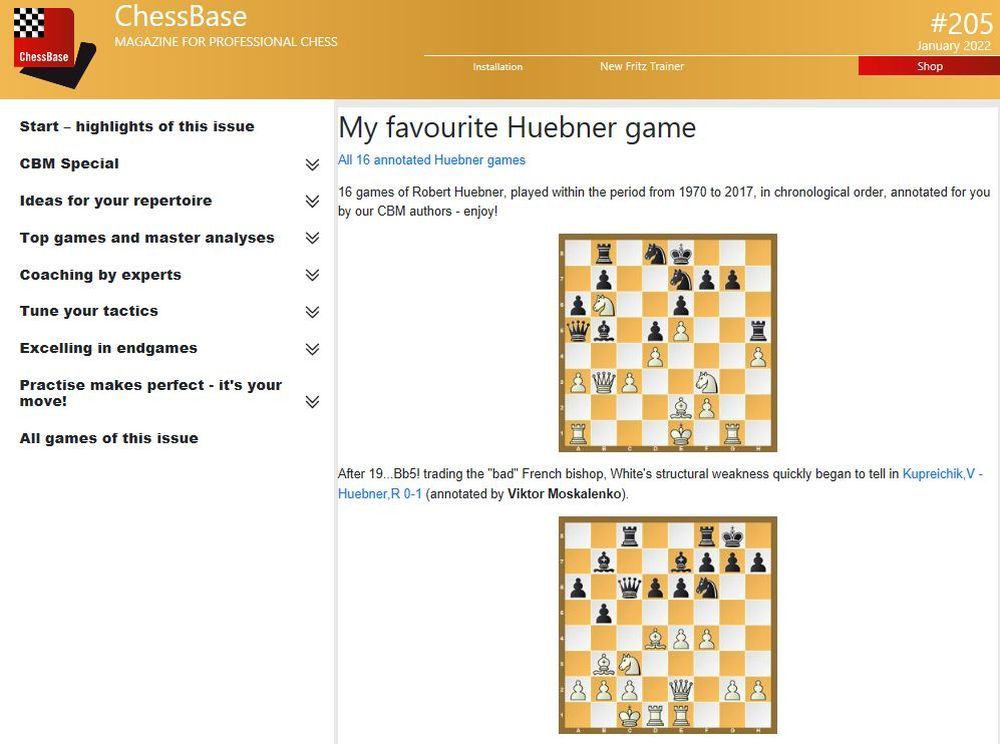 CBM authors comment on their favourite games of the former world-class player and candidate finalist. Exclusive collection of 16 games by Robert Huebner from 1970 to 2017. 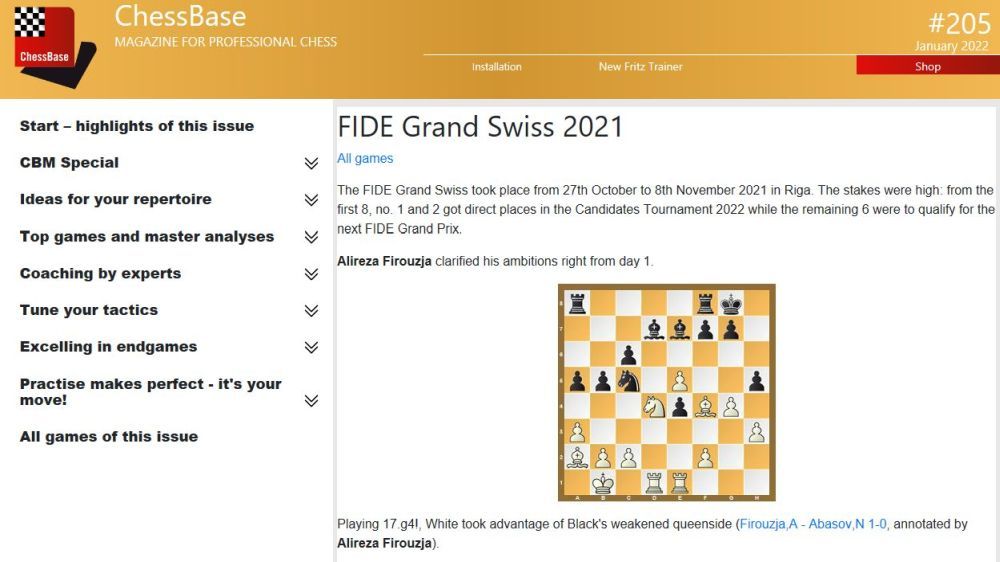 European Team Championship 2021: Gold for Ukraine, silver for France, bronze for Poland. Radoslaw Wojtaszek analyses his winning h-pawn run against Victor Mikhalevski, and Ivan Saric shows how to hold a draw against an Alireza Firouzja in top form. 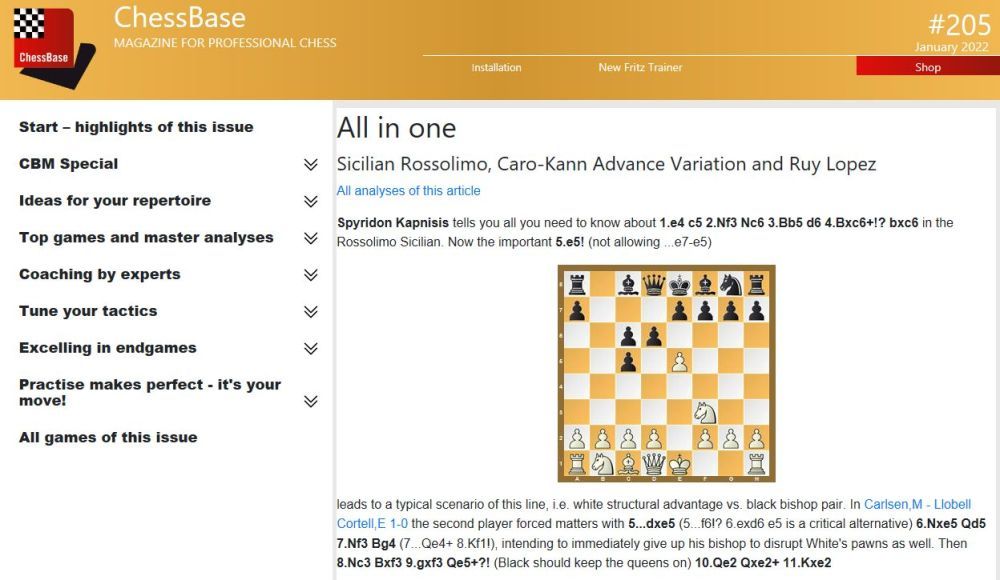 Here you can learn everything you need to know about a specific game. And all this on the basis of only one extensively annotated game! Spyridon Kapnisis makes you fit for the Sicilian Rossolimo Variation (1.e4 c5 2.Nf3 Nc6 3.Bb5 d6 4.Bxc6+!? bxc6 5.e5!). Igor Stohl presents early bayonet attacks in the Caro-Kann Exchange Variation and the Spanish Opening. 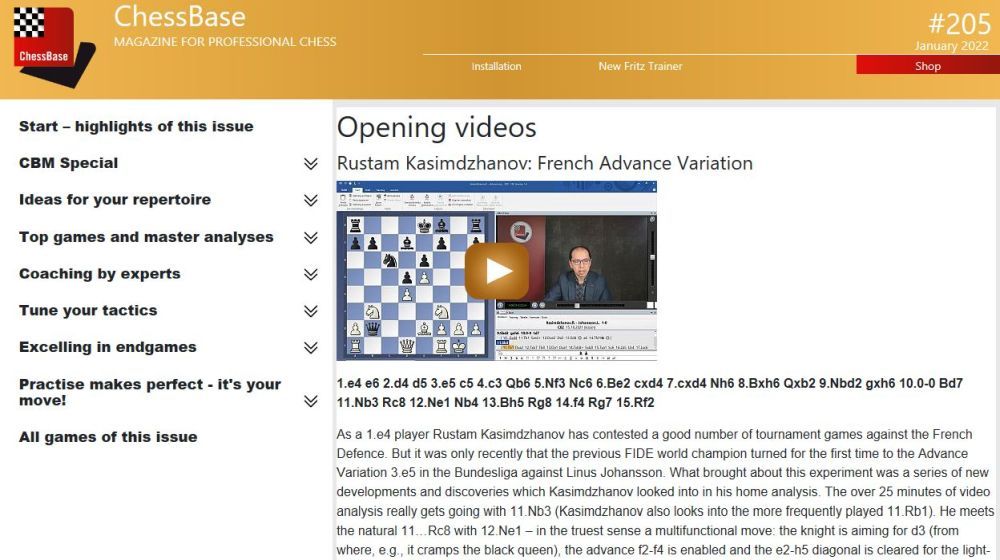 Gruenfeld expert Markus Ragger appoints the new 5...c5 as the main weapon in the variation with 5.Bd2. Rustam Kasimdzhanov reports on his experiment with the French Advance Variation. And Mihail Marin explains the Huebner System of the Nimzo-Indian Defence. 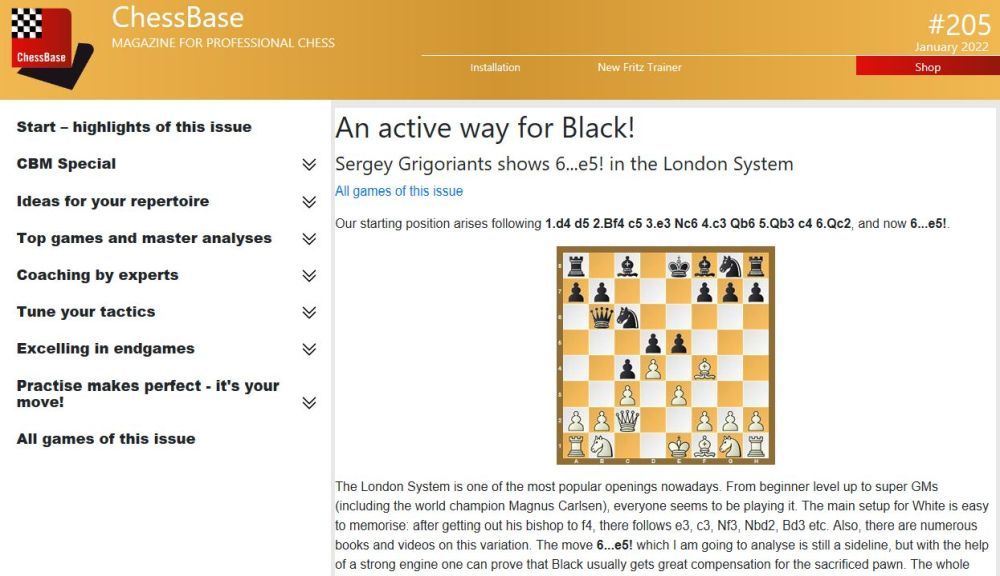 CBM #205 offers many exciting ideas for your next games with 11 opening articles: 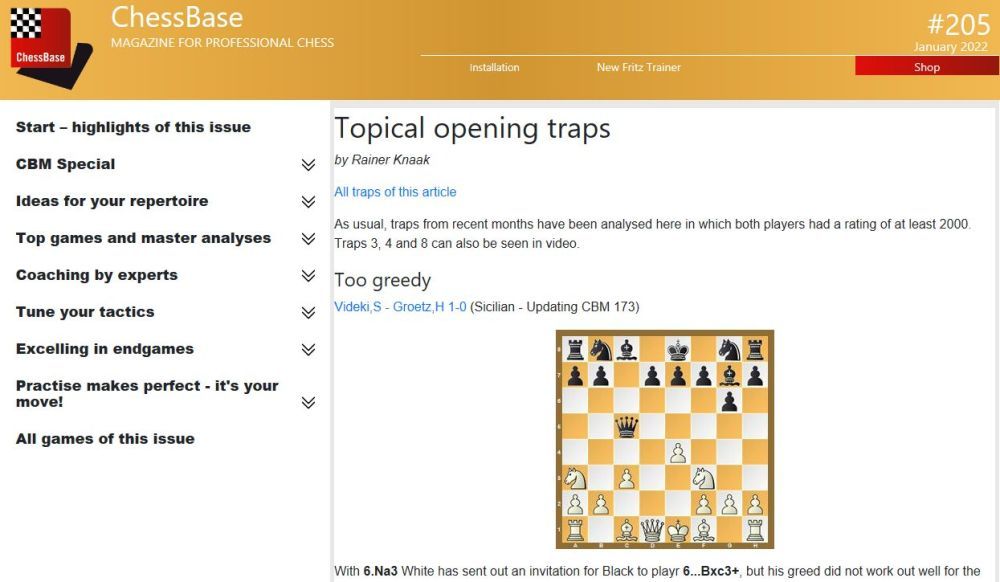 "From cool to highly speculative" Our expert Rainer Knaak takes a close look at eight traps from current tournament practice, three of which he also presents in video format. Budapest Gambit, Sicilian, King's Indian and much more. 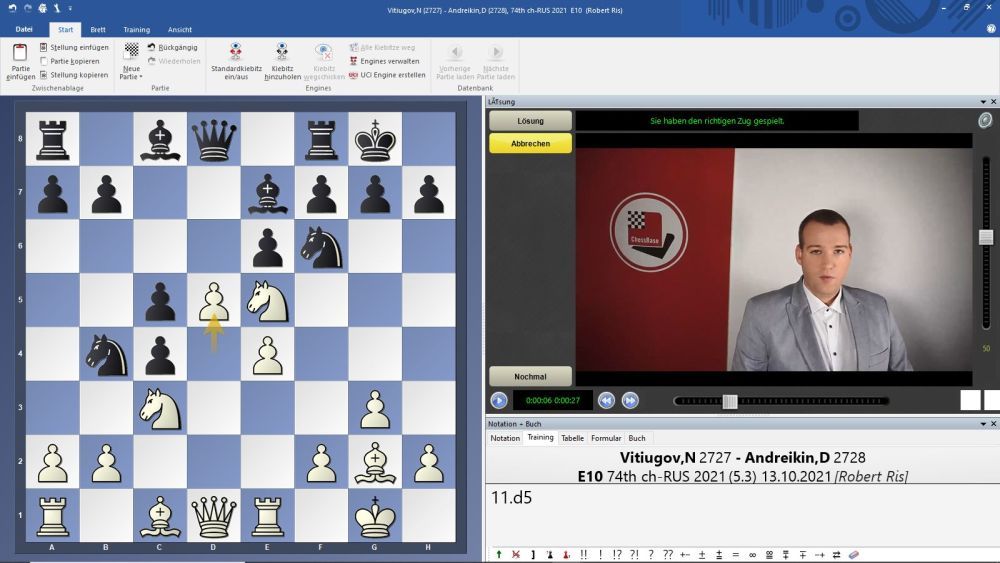 Let Robert Ris put you to the test. Together with the IM from the Netherlands, replay Nikita Vitiugov's spectacular game against Andreikin. Can you find the moves of the new Russian champion? 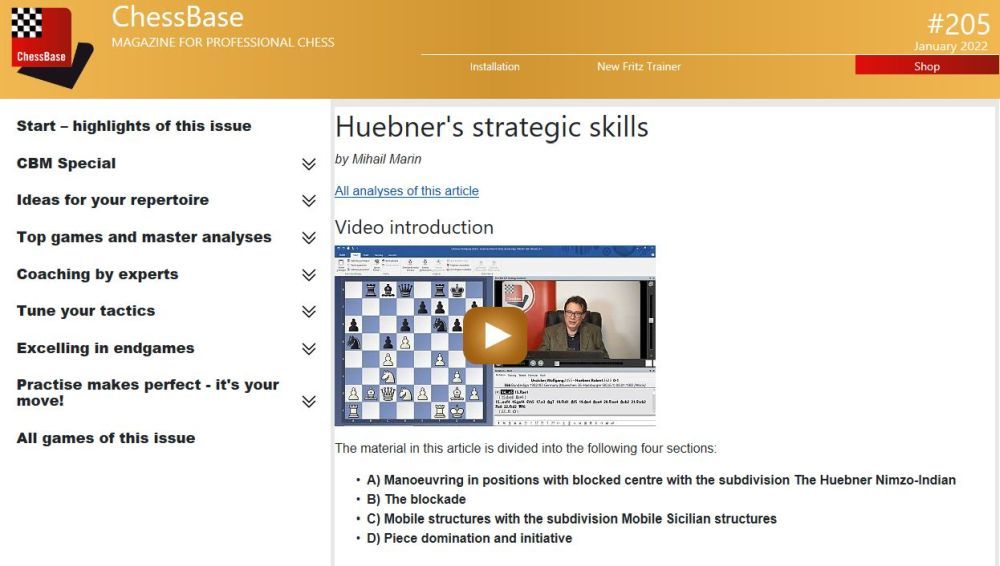 How can Robert Huebner's style of play best be described? Mihail Marin has analysed many of Huebner's games from the Interzonals and sheds light on various elements of his playing style. The Romanian GM himself is surprised by the results of his analysis! 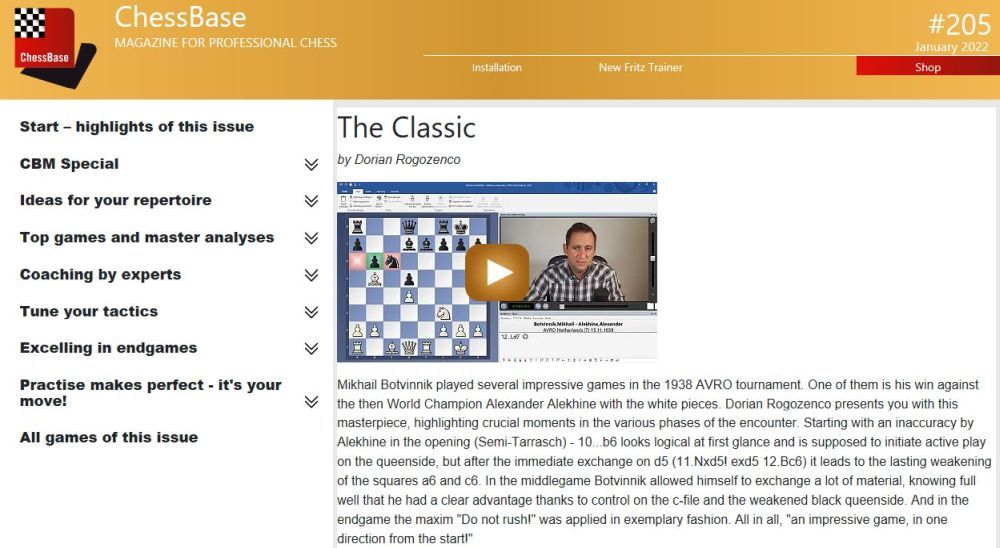 Dorian Rogozenco presents the game between Botwinnik and the then World Champion Alekhine from the AVRO tournament in 1938. "An impressive game, in one direction from the start"! 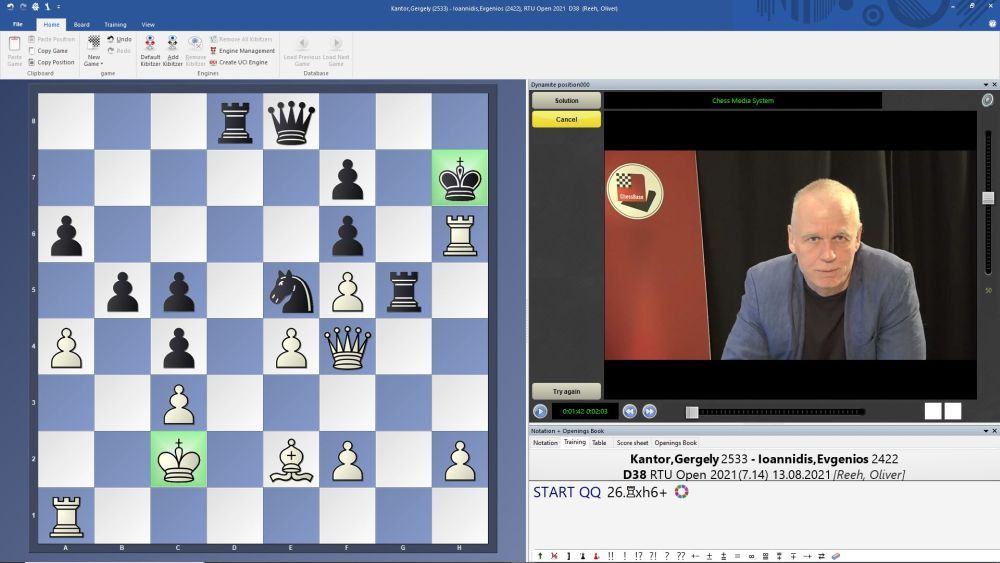 Train with Oliver Reeh's collection of 36 games, peppered with lots of training questions and three interactive videos! "My favourites" is best solved together with the International Master in the interactive format with video feedback!

Excelling in endgames: "Endgames by Dr. Robert Huebner" and much more 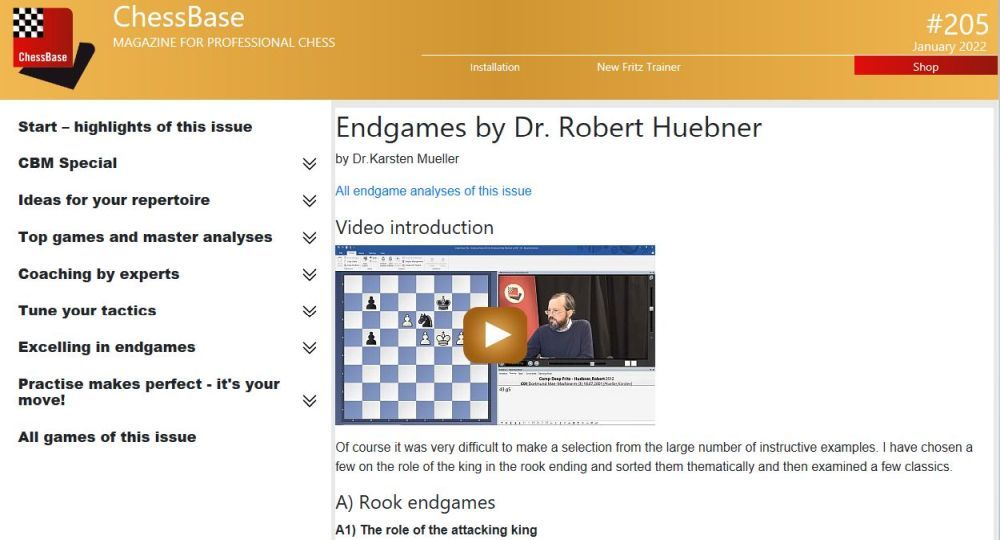 Endgame expert Karsten Müller contributes three different articles to this issue. In addition to a selection of Robert Huebner's best endgames (incl. video), the GM from Hamburg presents highlights from the Hou Yifan Challenge 2021 and also deals in detail with letters to the editor 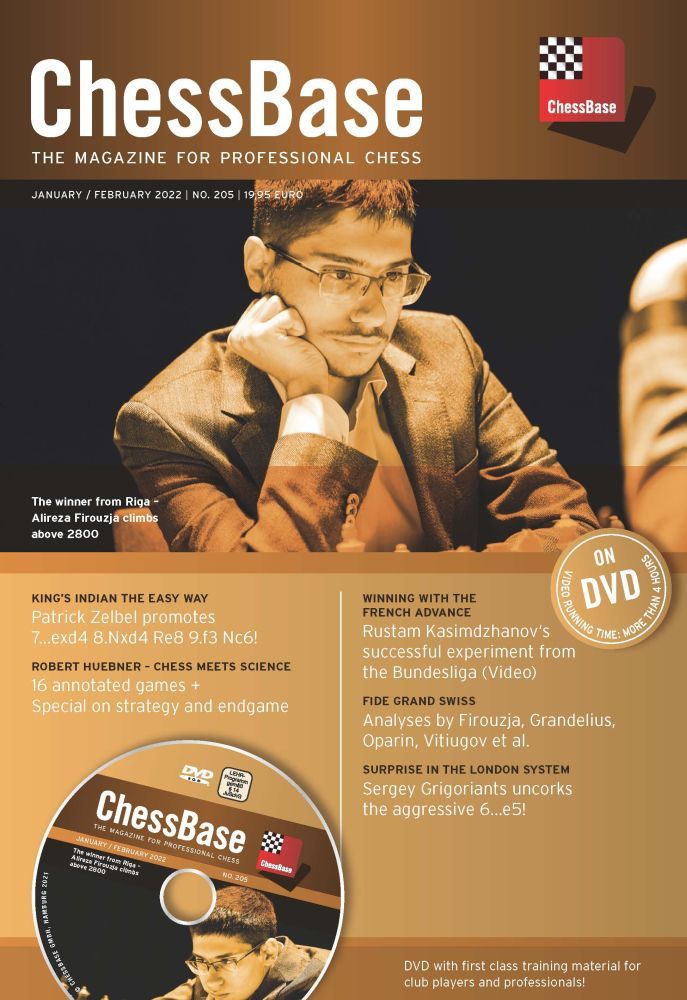