Highlights of this issue #206

Welcome to ChessBase Magazine #206! The home page welcomes you with the editors' special recommendations: the highlights of the issue to click, replay and enjoy! 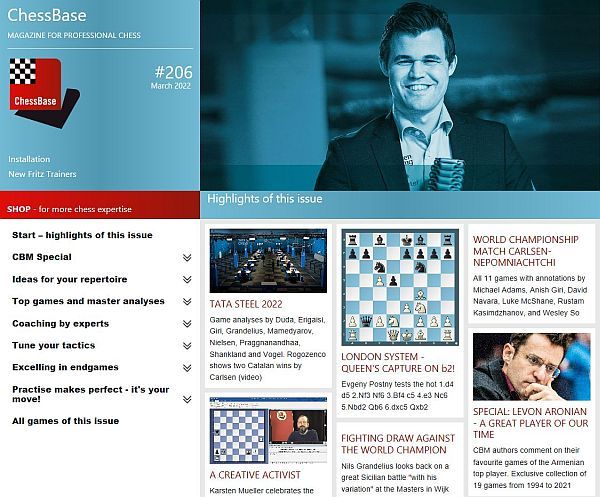 The best from Tata Steel 2022: analyses and videos. Or start trainining right away "Move by Move": Robert Ris plays through a fantastic game by the new Rapid Chess World Champion Abdusattorov with you! "One of the most interesting innovations in modern theory": 1.Nf3 d5 2.c4 d4 3.b4 g5!? starts a steamroller against the Reti! Not to be missed: The "Special" on Levon Aronian with 19 commented games as well as analyses + video on the endgames of the Armenian. 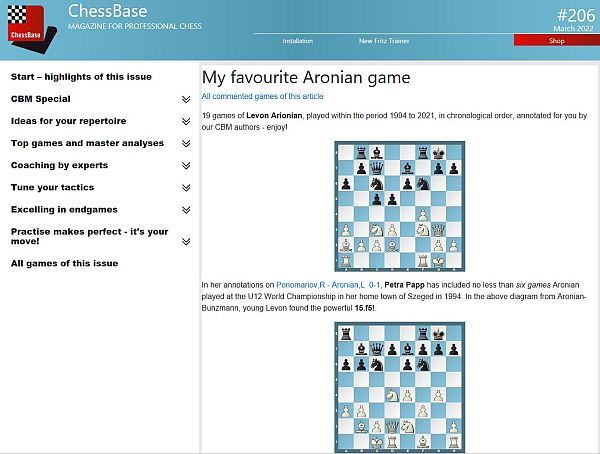 CBM authors analyse their favourite game of the Armenian. Exclusive collection of 19 annotated games from 1994 to 2021. 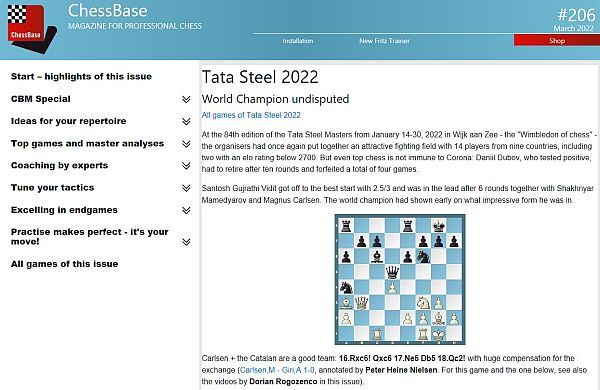 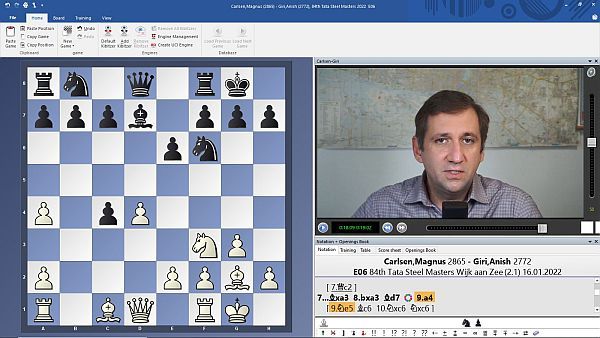 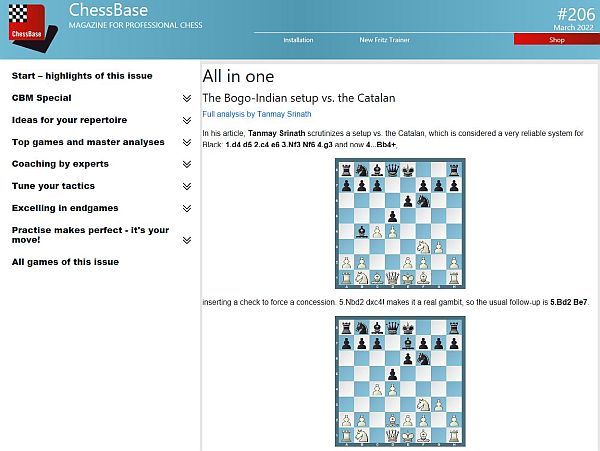 Here you can find out everything you need to know about a specific line - and all that on the basis of just one, extensively annotated game! Tanmay Srinath takes a close look at the tricky Bogo-Indian setup against the Catalan: 1.d4 d5 2.c4 e6 3.Nf3 Nf6 4.g3 Bb4+ 5.Bd2 Be7. 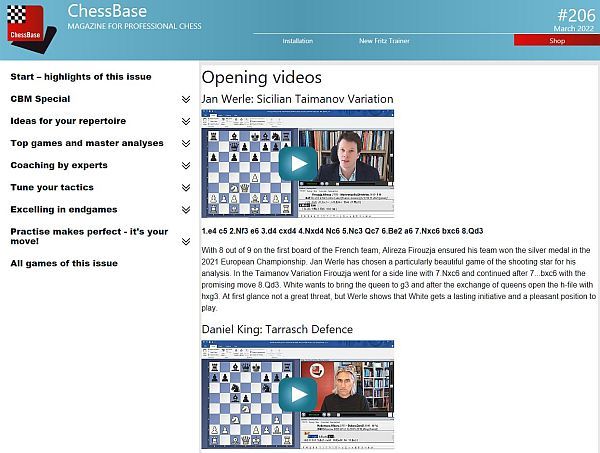 Jan Werle uses a game by the current shooting star Alireza Firouzja to show a way of getting a secure initiative against the Sicilian Taimanov Variation. Daniel King once again takes up an idea by Daniil Dubov, this time in the Tarrasch Defence (7...cxd4 8.Nxd4 Bc5). And Mihail Marin offers some reflections on the Flohr-Mikenas System based on games by the "hero" of this issue, Levon Aronian. 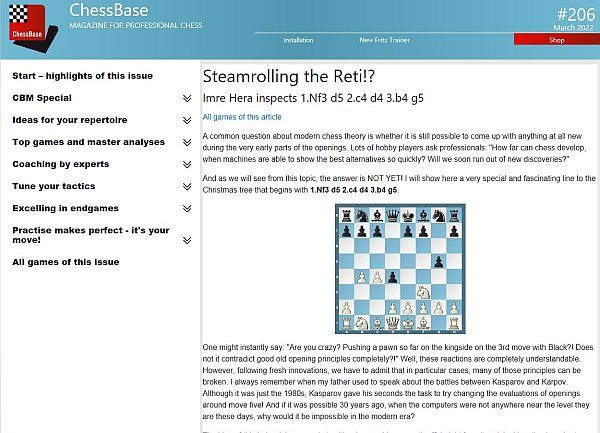 CBM #206 offers many exciting ideas for your next games with 11 opening articles:

"From Caro-Kann to English" - Rainer Knaak takes a close look at eight traps from current tournament practice three of which he also presents in video format. 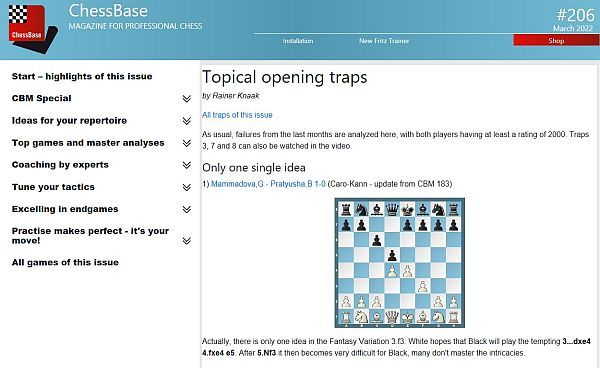 Let Robert Ris put you to the test. Nodirbek Abdusattorov sets off fireworks with many surprising ideas against GM Sethuraman in the Exchange Variation of the Slav Defence. Can you find the moves of the new Rapid World Champion? 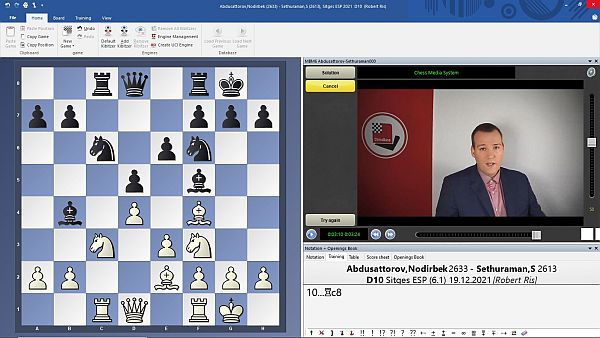 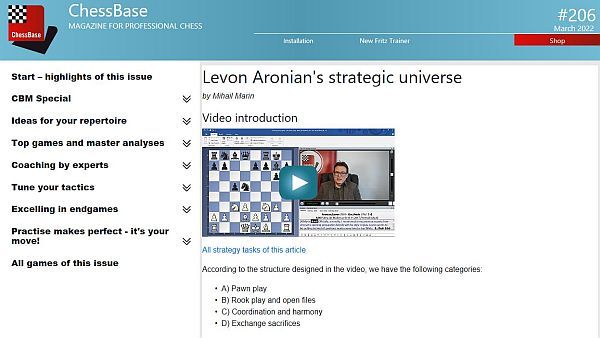 "That was perfectly played!" Dorian Rogozenco presents the game between Mikhail Chigorin and Emanuel Lasker (London 1899). A wonderful testament to the playing strength of the then World Champion!

Tactics: "Knights on the rampage" 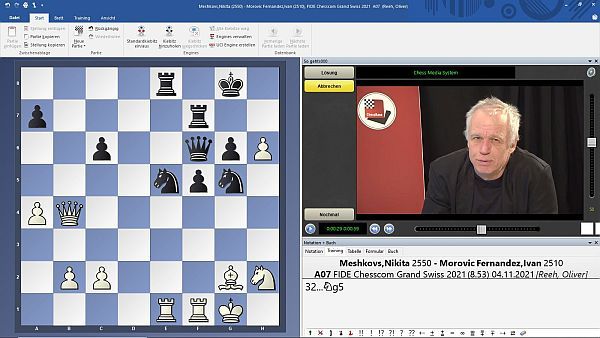 "Endgame highlights from the 2021 World Championship match" and much more 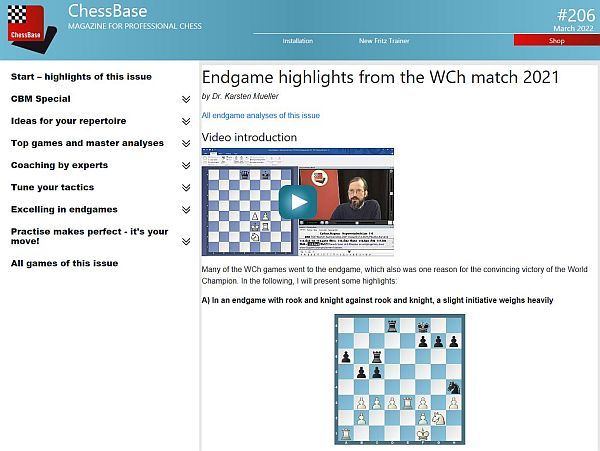 The Hamburg endgame expert provides comprehensive training material for the highest demands, including the "Endgame Highlights from the World Championship Match 2021" and a selection of the best "Endgames by Levon Aronian" - Karsten Müller prefaces both articles with a detailed video introduction. In addition, he provides further analyses in "Readers write". 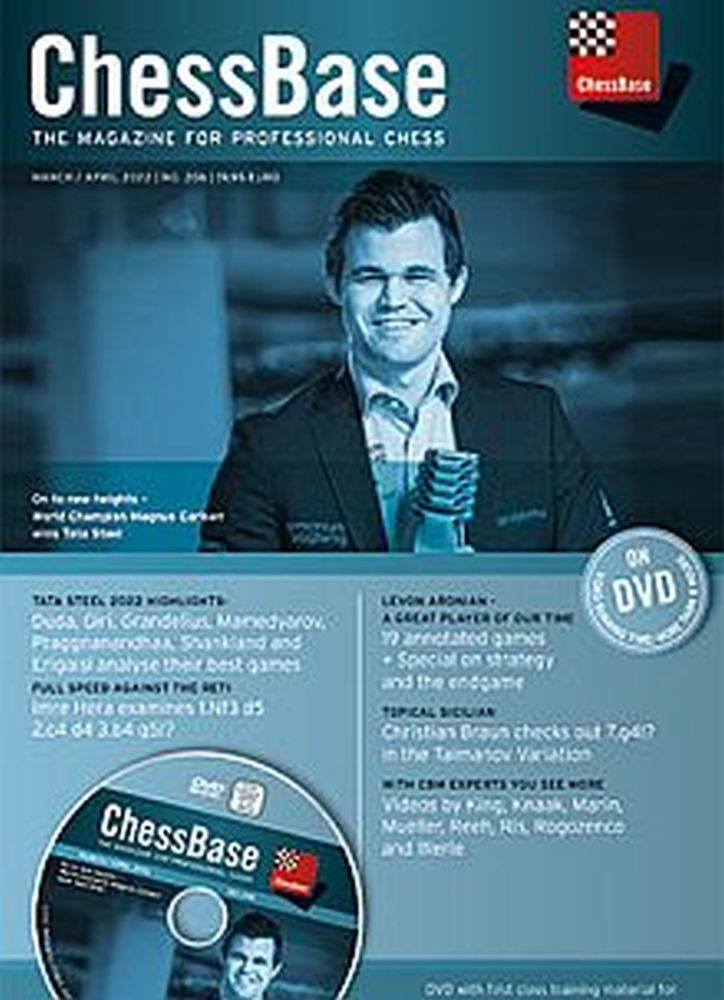