New: The Hippopotamus system of defence by Andrew Martin

What is the Hippopotamus system of defence? The idea is that, at the beginning of the game, Black develops within his own first three ranks. He constructs a solid, flexible and hopefully stable position, awaiting events. At the right moment, he will strike back! The Hippopotamus was given the name by an eccentric English amateur player JC Thompson, back in the 1950’s. It seems as good a name as any. Given the right conditions, Black will emerge from the chessboard swamp and crush all before them. Check out this new DVD by IM FST Andrew Martin on an off-beat opening and add a new repertoire to your arsenal. Photo: ChessBase

The Hippopotamus system of defence 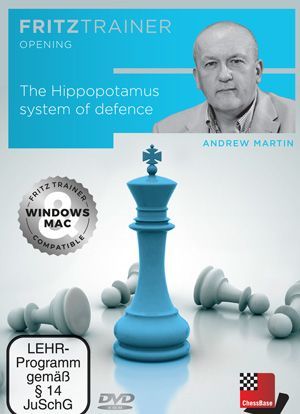 Many strong players have taken a liking to the Hippo, including such greats as Boris Spassky and Gata Kamsky. Here we have an anti-theoretical opening, which has allowed them to draw on experience, rather than the need to remember long move sequences. It’s worth pointing out that White may play in Hippo-style too.

On this ChessBase video course IM and FIDE Senior Trainer Andrew Martin maps out a game plan for the Hippo user and shows how the opening is played in the present day. It is an exciting tour of some very unusual chess.

Andrew David Martin (born 18th May 1957 in West Ham, London) is an English chess player with the title of international master. Martin received his title as international master in1984. He earned his first grandmaster norm in the British Championship of 1997 in Brighton. Martin was a commentator at.the chess world championship between Kasparov and Kramnik in 2000 and commentated at the British Championship for 20 years, before retiring in 2017.

On the 21st February 2004 Martin set a new world record for simultaneous chess. He faced 321 chess players at the same time. His result was: 294 wins, 26 draws and only one loss. Martin is known as a professional chess teacher and is the former Head of the ECF Academy.. Martin is a chess columnist, an author of chess books and the author of various instructional videos. He is also a FIDE Senior Trainer and the current ECF Manger of Coaches.