Tournament leader Humpy maintained her sole lead after surviving quite a few missed opportunities by her opponent Nana Dzagnidze. Anna Muzychuk arguably had the most interesting game of the round against Kateryna Lagno after almost a five-hour long game. Pia Cramling finally managed to convert advantage into a victory after her opponent Elisabeth Paehtz blundered and made a few inaccuracies under time pressure. Valentina Gunina's tough luck at the tournament continues as this time she made a huge error in the opening against Zhao Xue after which she could not recover for the rest of the game. Goryachkina beat Harika, after the latter made a wrong exchange which resulted in an isolated pawn and advanced king for her opponent. Kosteniuk and Mariya Muzychuk made a grandmaster draw in just 23 moves. Photo: Karol Bartnik / FIDE

For the third consecutive round, four decisive results and two draws have taken place. Humpy maintained her lead by a half point after surviving against Dzagnidze where the Indian felt that her opponent was better throughout the game

Humpy opted for the Queen's Indian Defence. She had trouble getting her light square bishop out in the play for the major part of the game which she admitted. Within 26 moves majority of the pieces got exchanged and the game arrived at Rook, bishop and many pawns endgame. 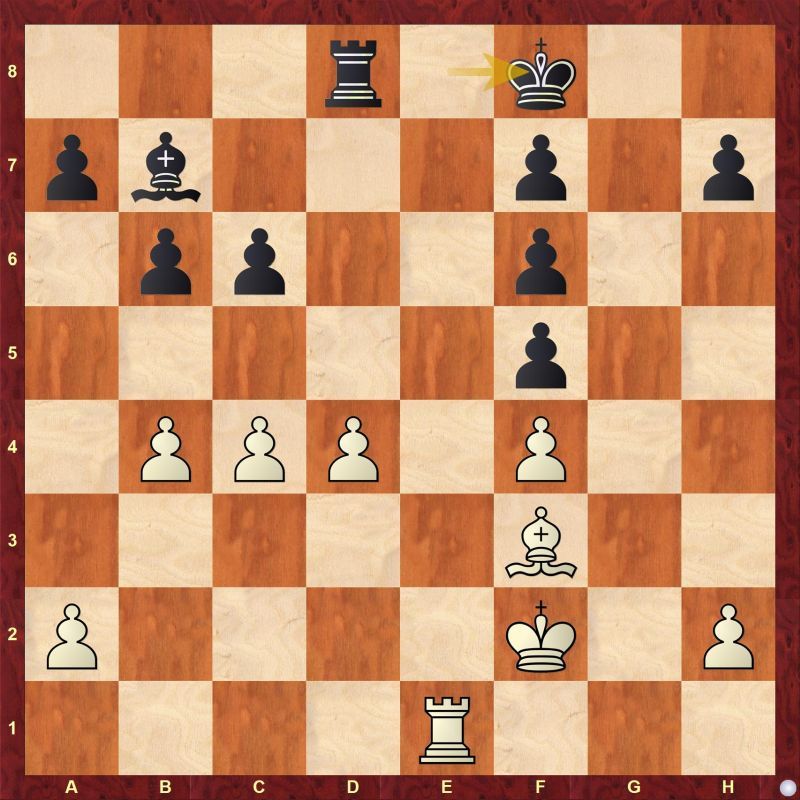 Here Dzagnidze defended the d4-pawn with 26.Rd1, instead she should have activated the king with 26.Ke3 and if black wanted to exchange the rooks with 26...Re8+ 27.Kd2 Rxe1 28.Kxe1 then white is doing completely fine, but maybe the Georgia no.1 did not want to have a bishop ending.

In a post-game interview, Humpy said, "It was not easy. It was a completely positional game but better for white throughout the game. Somehow I finally managed to bring my bishop into the game. It's important to maintain the rook or else it's lost." 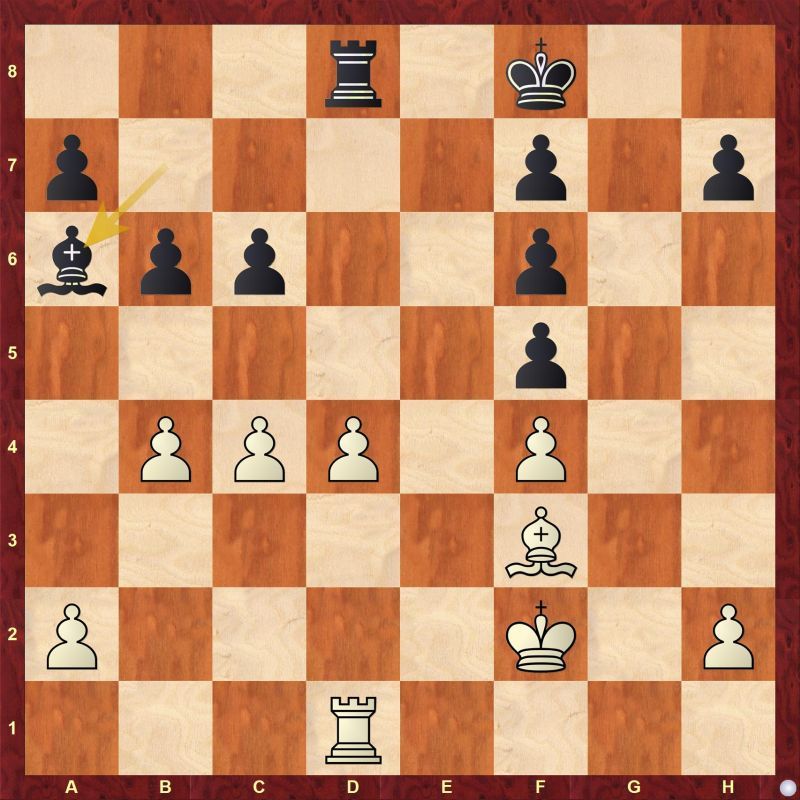 Find the best continuation for white after 26...Ba6

Dzagnidze went with 27.c5 however she should have taken the c6-pawn with 27.Bxc6 Bxc4 28.d5 and white has fantastic advantage. 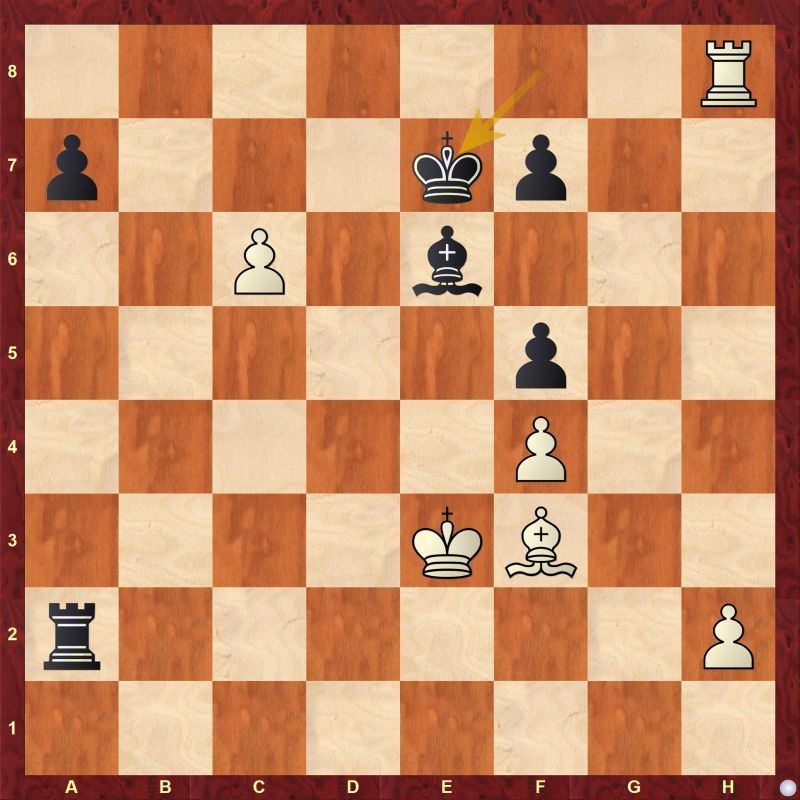 Find the winning plan for white after 37...Ke7

White missed her final winning chance when she played 38.Ra8 instead of pushing her passed pawn on the kingside with 38.h4 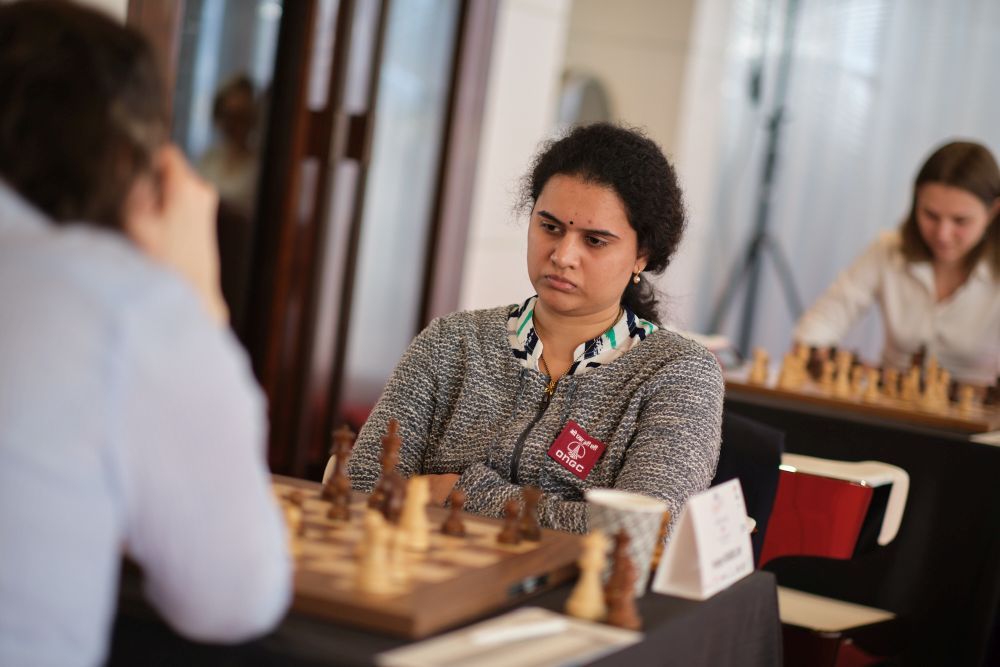 The most interesting and the longest game of the round was of Anna Muzychuk's. She almost fought for five hours before converting her winning advantage. 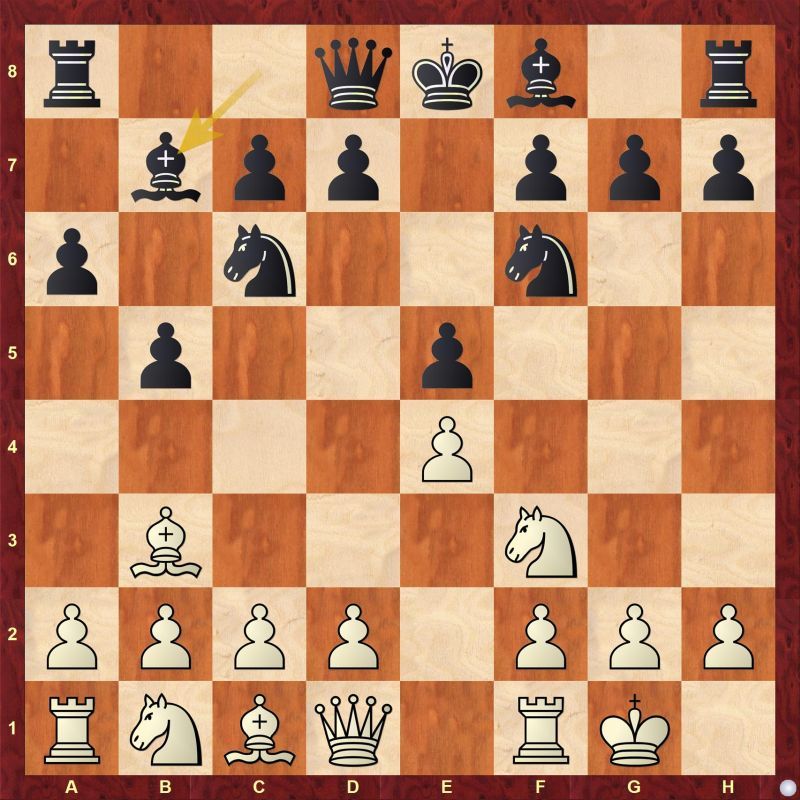 During her analysis, Anna revealed that she played the 5...b5, 6...Bb7 variation in Ruy Lopez for the very first time in her life. 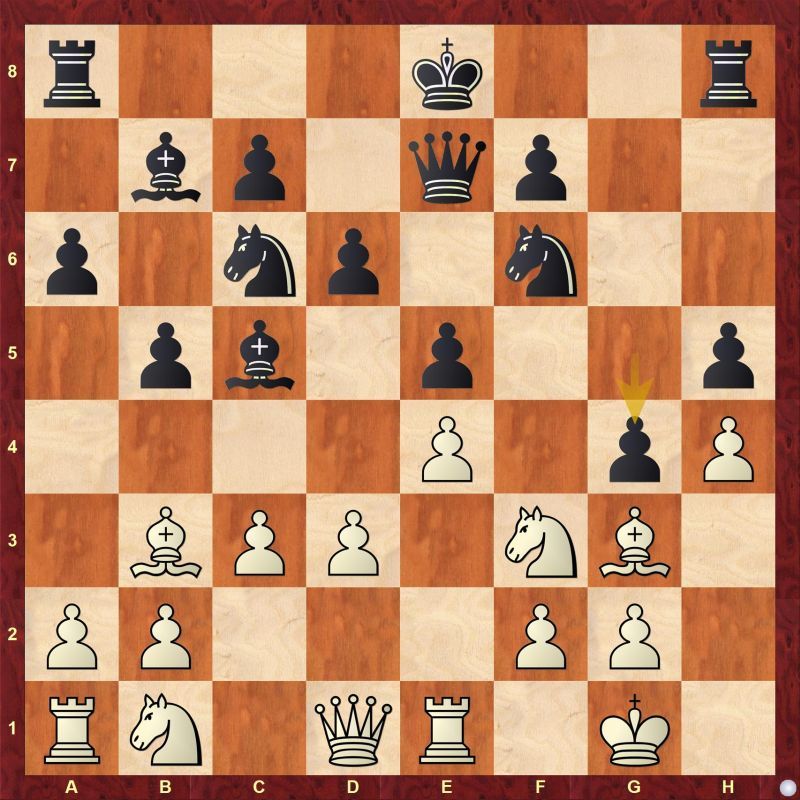 Where should the knight move after 13...g4

Anna felt that white should have retreated her knight with 14.Nh2 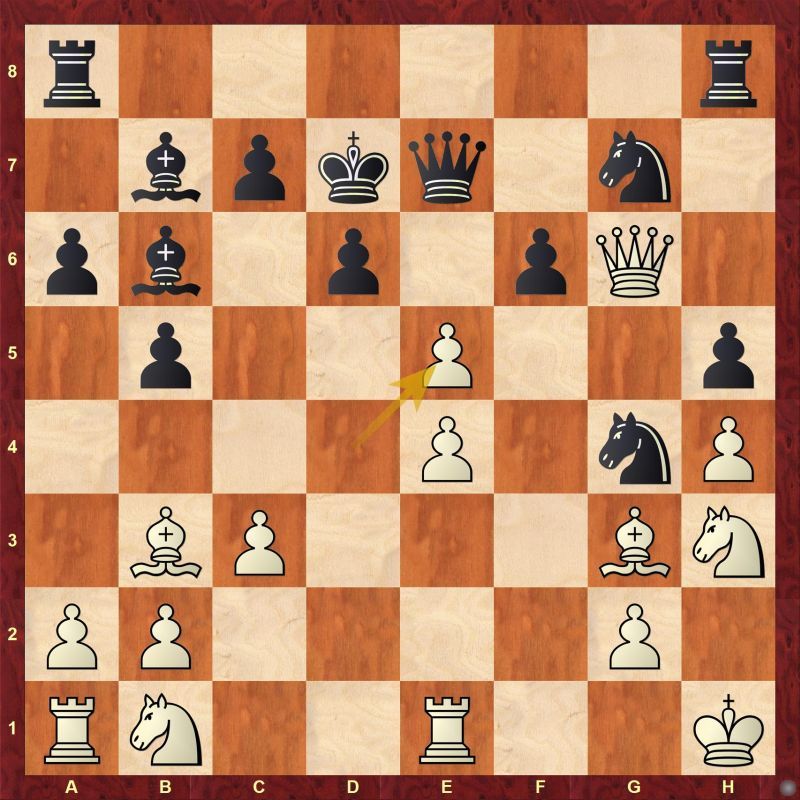 How should black recapture after 22.dxe5 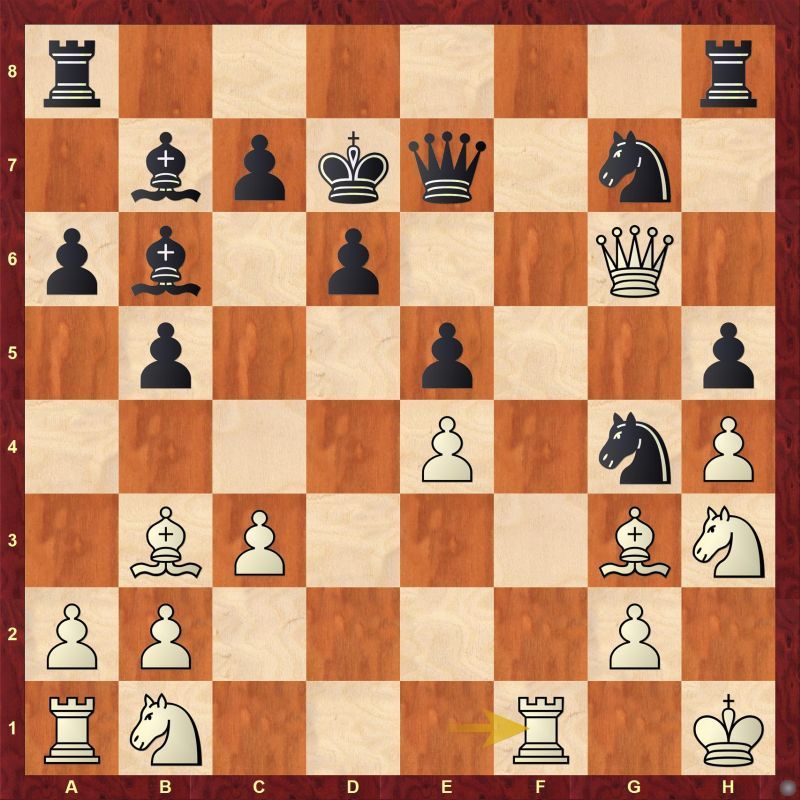 Here Black played 23...Rh6, however there was an interesting alternative, can you find it?

White continued with 24.Qf7 Rf6 and it was all over, Black got a completely winning position and then it became just a matter of time and technique to convert it into a win. 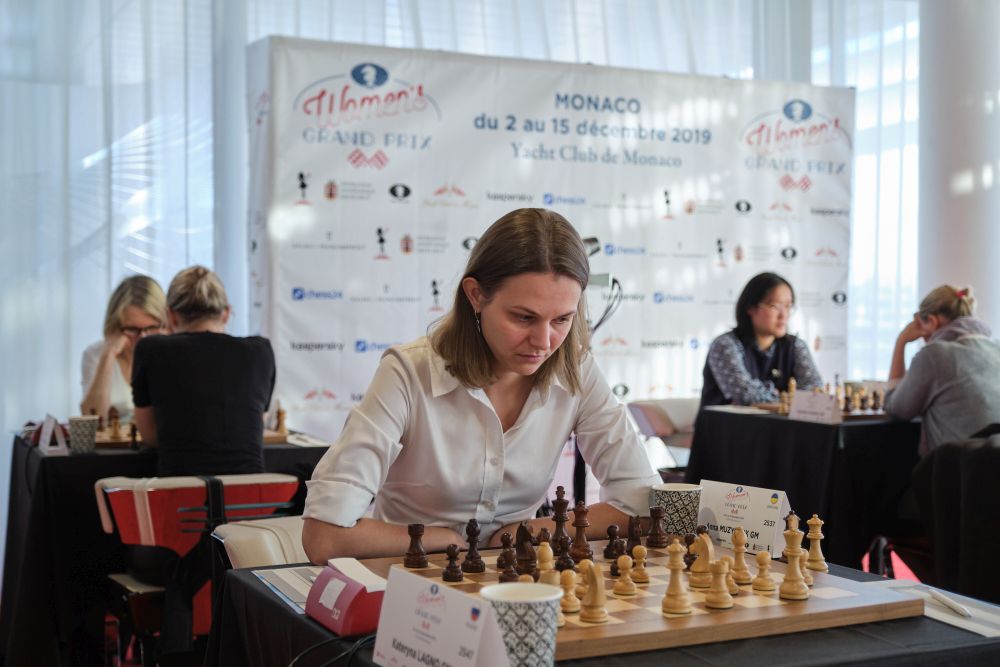 Germany no.1 Elisabeth Paehtz started well against Pia Cramling, however she made a few inaccuracies and eventually she blundered in the time pressure. 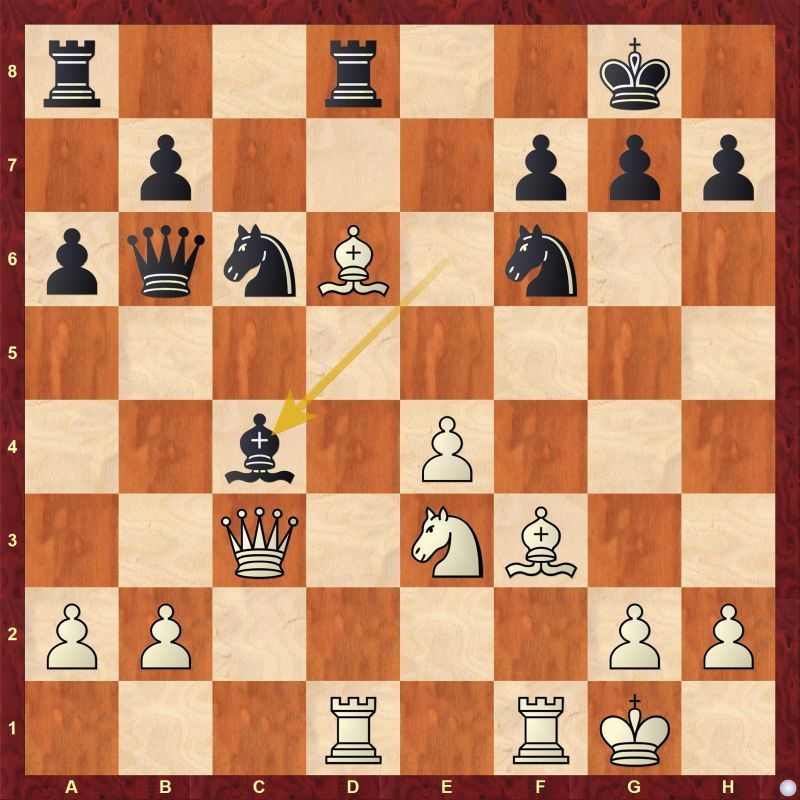 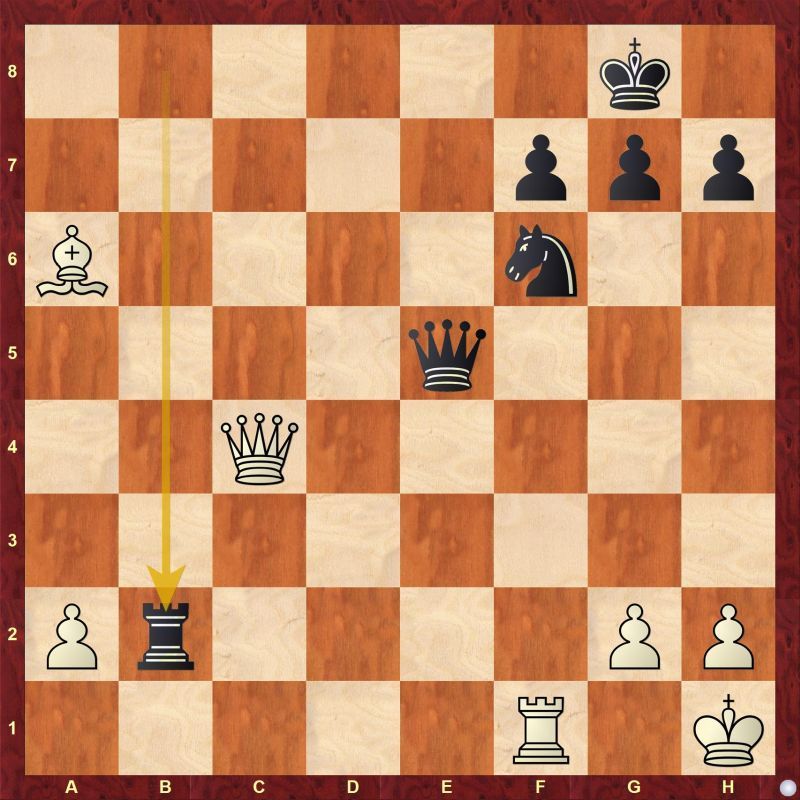 Here White should have exchanged the queens with 27.Qc8+ Qe8 28.Qxe8 Nxe8 29.a4. If anyone then it is white who has chances of winning.

White lost the a-pawn soon and eventually the game after blundering her queen in time pressure.

Pia Cramling talks about a lot of things | Video: FIDE 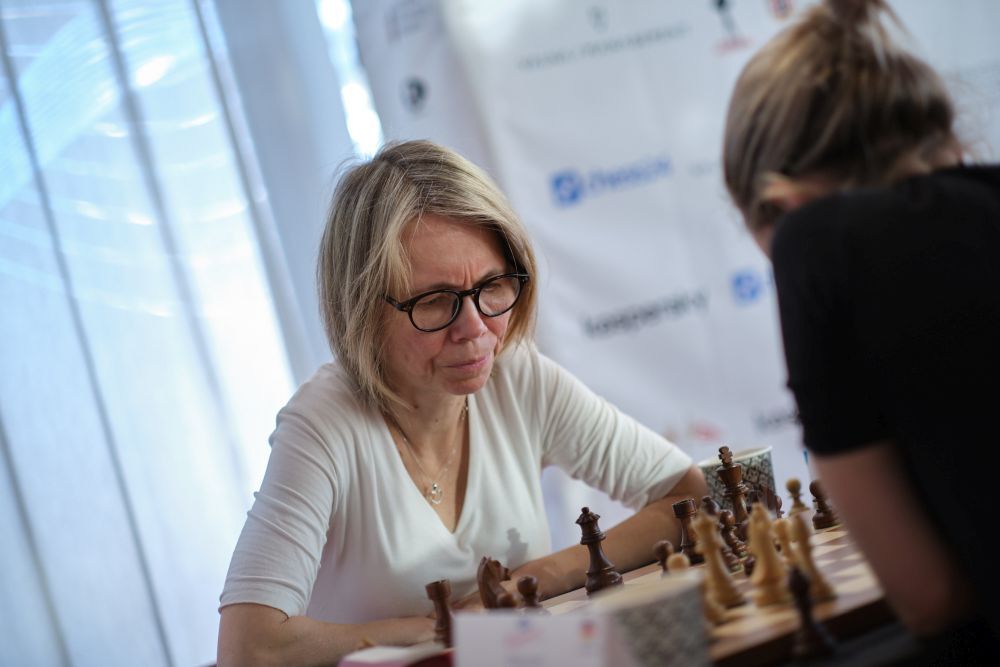 Zhao Xue scored her first victory of the tournament against Valentina Gunina. Zhao got a pleasant position out of the opening after Gunina misplayed early in the game. 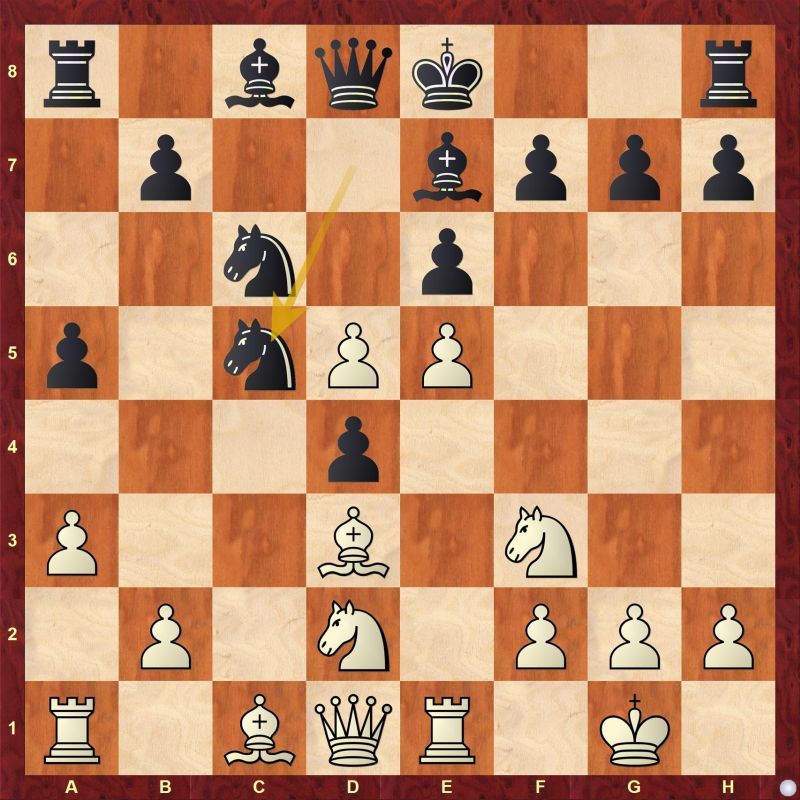 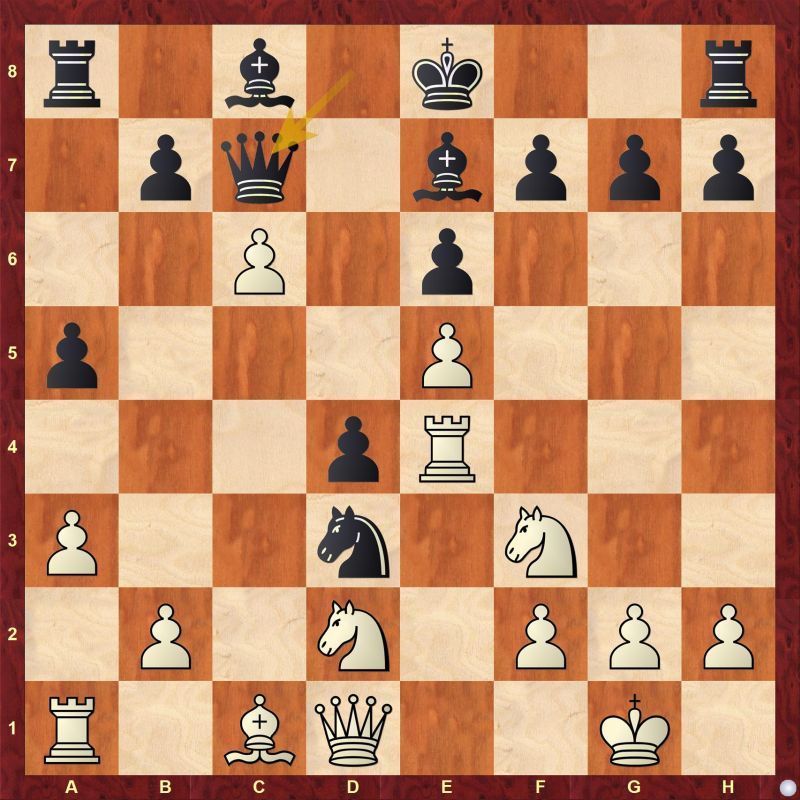 White continued here with 14.Nc4, however 14.Rxd4 would have been completely crushing for black. 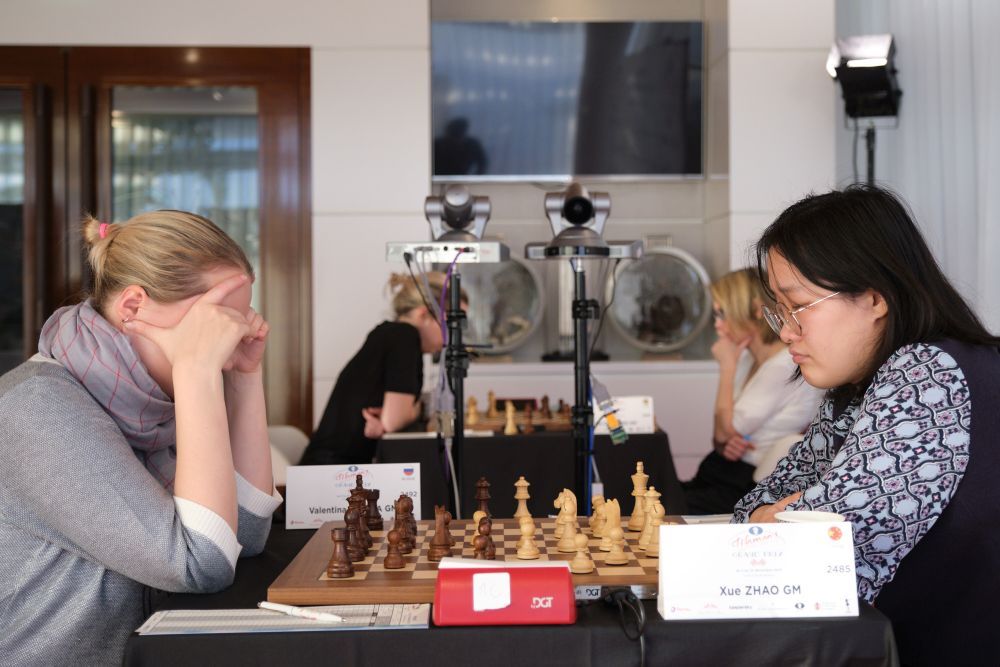 Both Harika and Goryachkina kept exchanging pieces at regular interval. Within 25 moves, the game arrived to a Rook, bishop and many pawns ending. 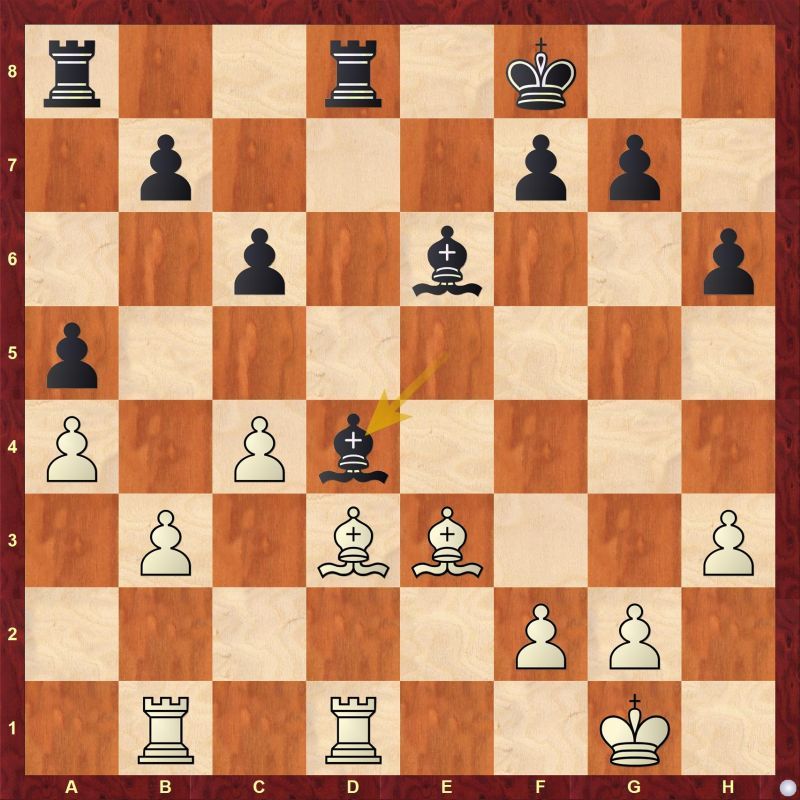 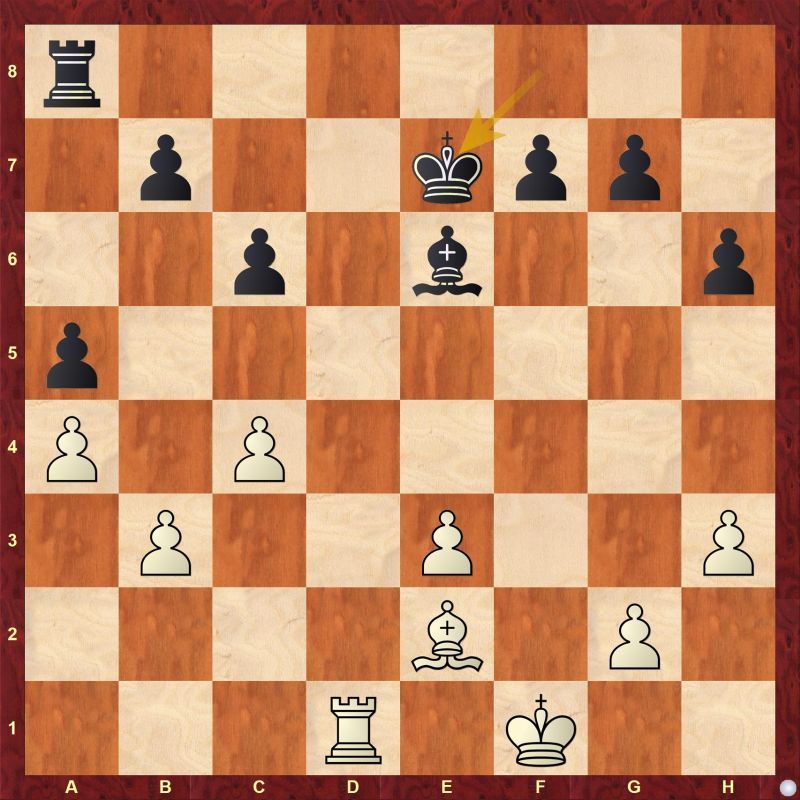 Due to the isolated e3 pawn and black's better placed king, Goryachkina used the right technique and converted it into a victory. 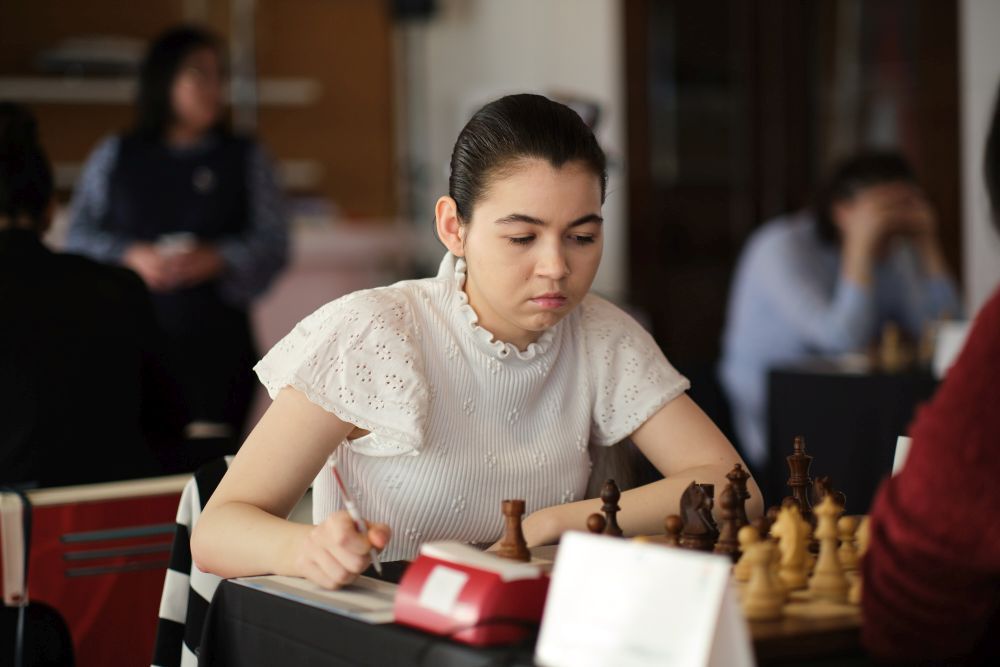 Kosteniuk vs Mariya had a very short draw

In Caro-Kann Defence, Alexandra Kosteniuk and Mariya Muzychuk made a very short draw in just 23 moves. 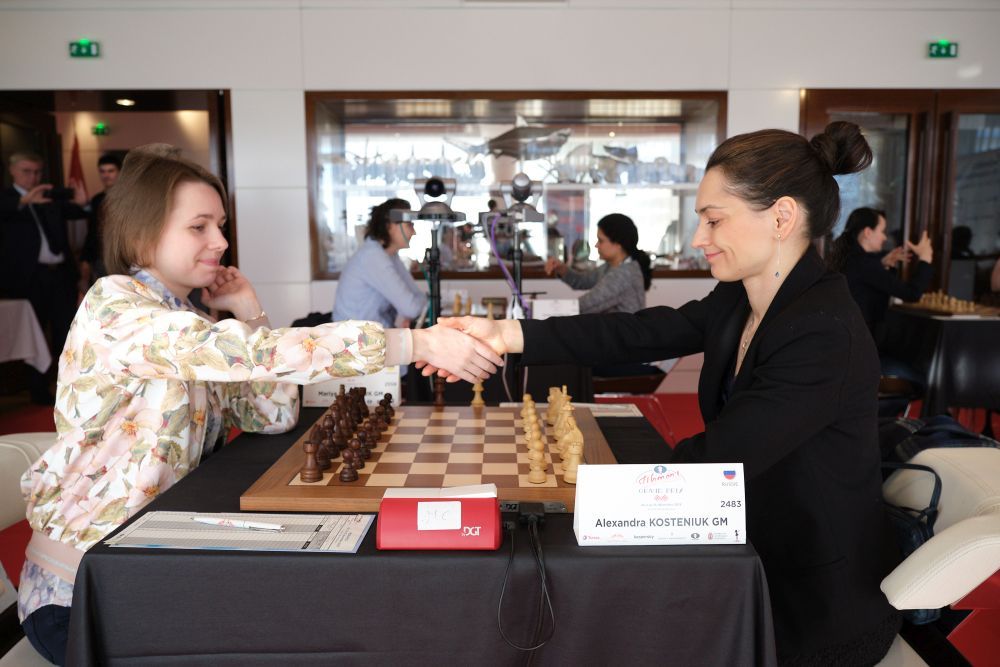 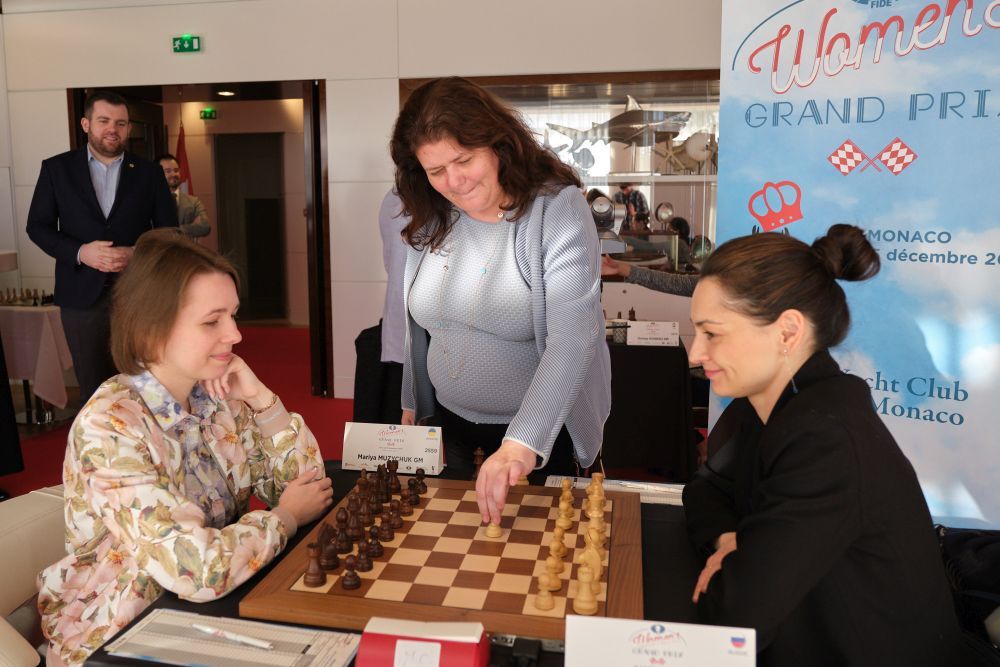