Both Goryachkina and Humpy won their respective games against Dzagnidze and Zhao respectively after fighting for over four and a half hours, to stay in the lead with 5.0/7. Meanwhile Harika trails behind the leaders by a half point. She made a short draw with Anna. Round 8 will witness India no.1 Humpy face India no.2 Harika. Pia Cramling, Kateryna Lagno and Anna Muzychuk are tied at the fourth spot with 4.0/7 each. Gunina terrible form continues as she again suffers another loss, this time against the legendary Pia Cramling after she blundered a knight. Find out all round 7 games annotated in this detailed report. Photo: Karol Bartnik / FIDE

Round seven again had only one draw and five decisive games after the scheduled rest day with the tournament leaders Humpy and Goryachkina both playing for over four and a half hours.

Goryachkina beat Dzagnidze after almost a five-hour long battle. However the Georgia no.1 was not without chances. Immediately after the completion of the opening, black had an opportunity to capture a pawn. 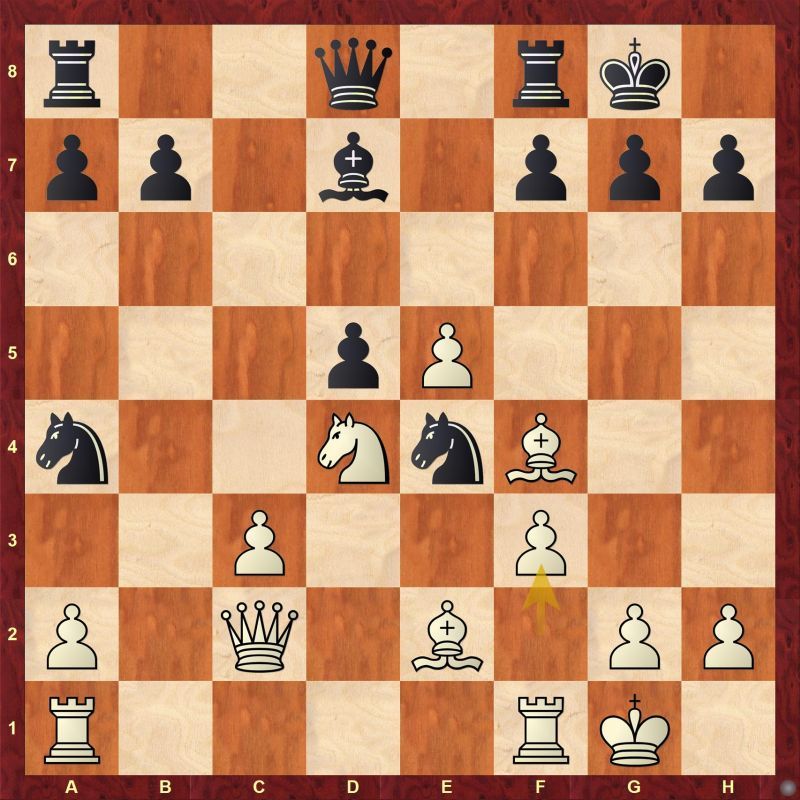 In general we do not feel like taking a pawn unless we are absolutely sure that no ill will befall us. However in this position, there was no sure way to see whether white can get some compensation. So Dzagnidze might have considered playing 15...Nexc3 and taking it in the game would not be that bad either. 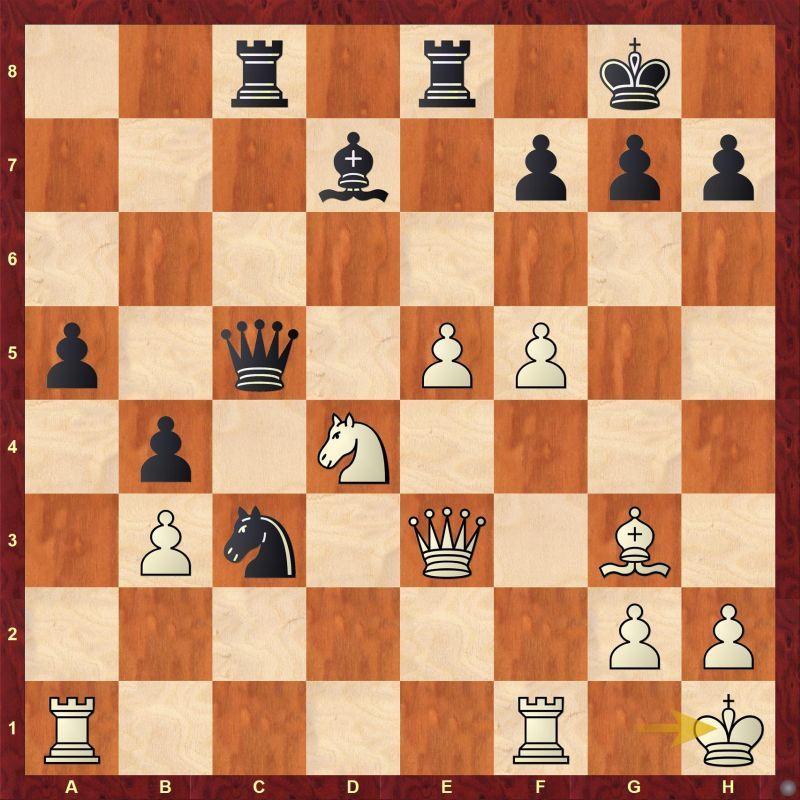 White's threat of 28.f6 is imminent. How should Black react to it?

However Black made the mistake of playing 27...a4 which allowed White to play 28.f6 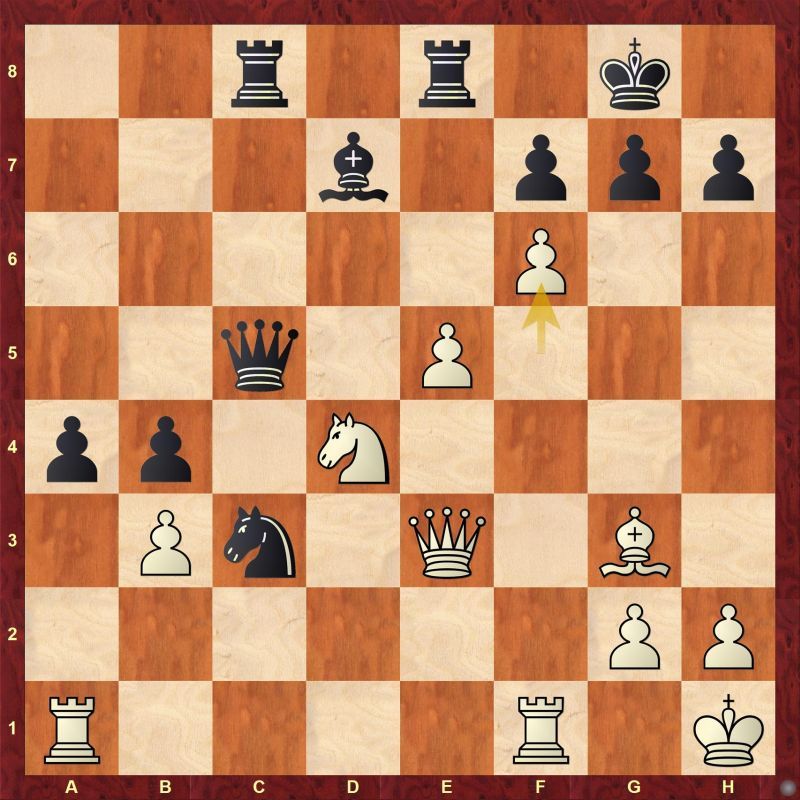 Dzagnidze captured the b3 pawn with 28...axb3, however 28...a3 would have been a better choice as that would have kept a1-rook's path blocked and the a3 would be menacing. 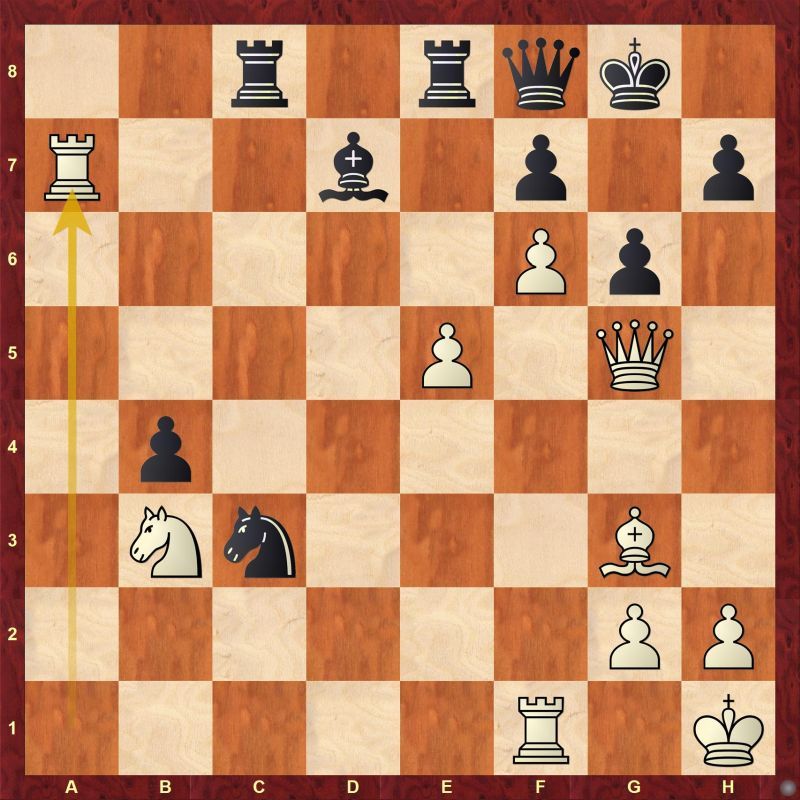 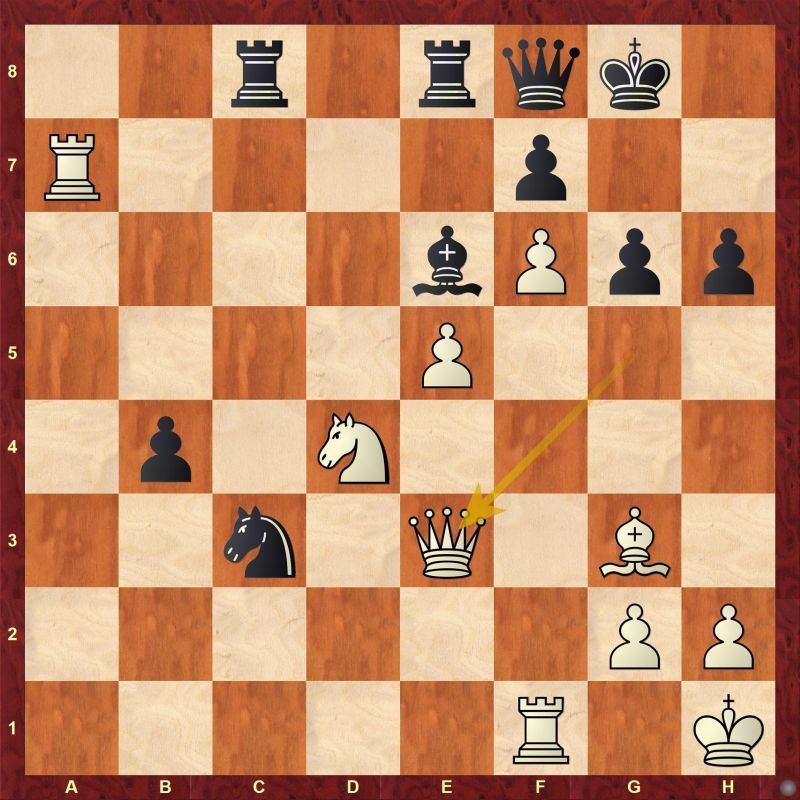 Find out what Black should have played instead of 33...b3 to stay in the game. Things just went downhill for black after losing the passed b-pawn.

Zhao is known to play a variety of openings. Against Humpy, she went with 1.Nf3 d5 2.d4 b5. Humpy brought her own antidote with 3.e4. 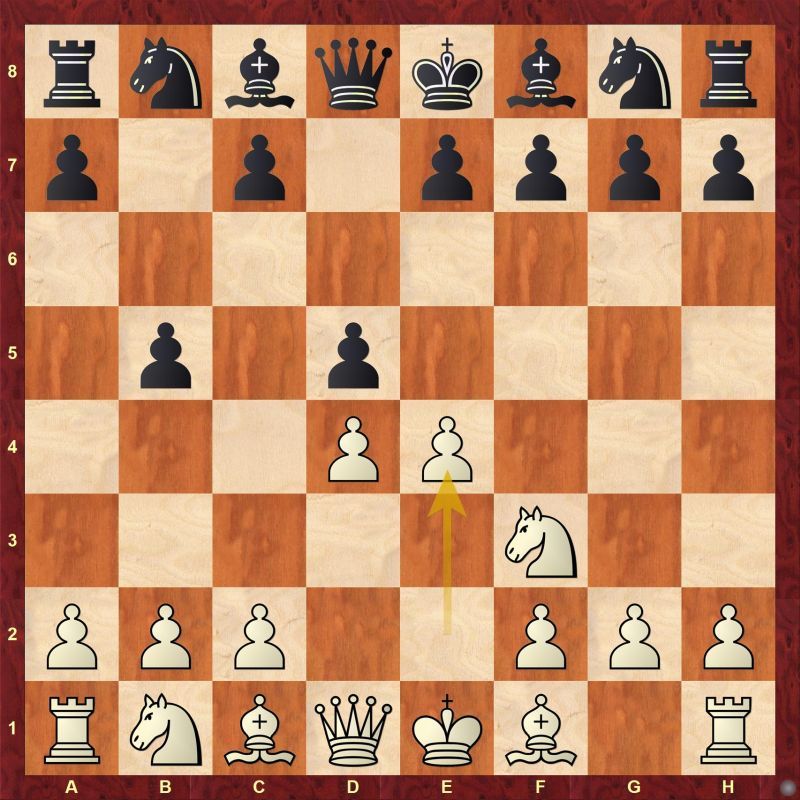 Early in the middlegame, Zhao got an advantageous position, but she was unable to maintain it. 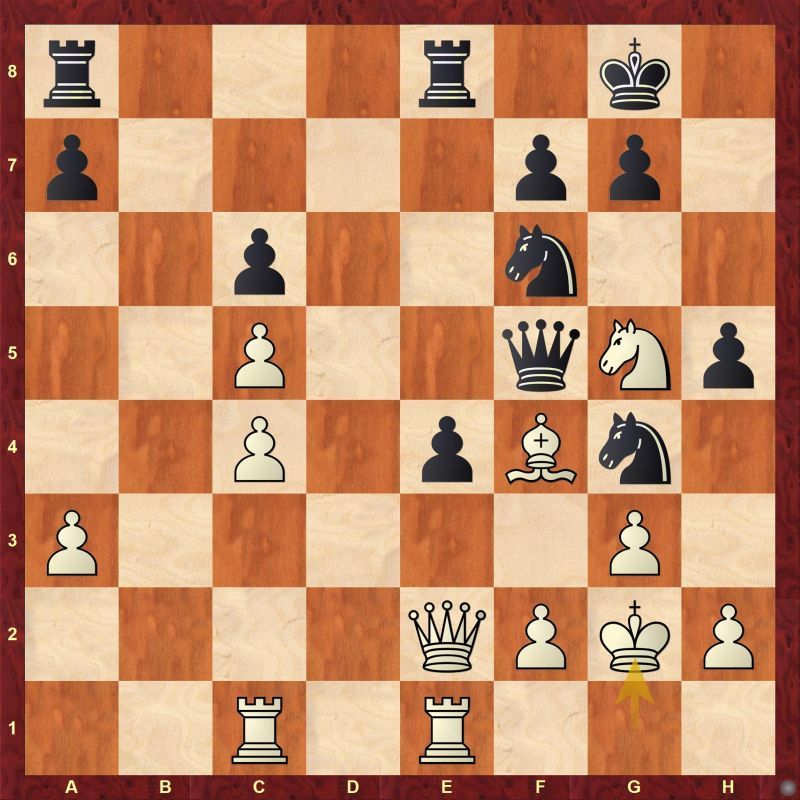 Black grabbed the c5 pawn with 26...Qxc5. However there was a better continuation. Can you find it? In a seemingly equal position, black made an incorrect pawn sacrifice with 28...e3 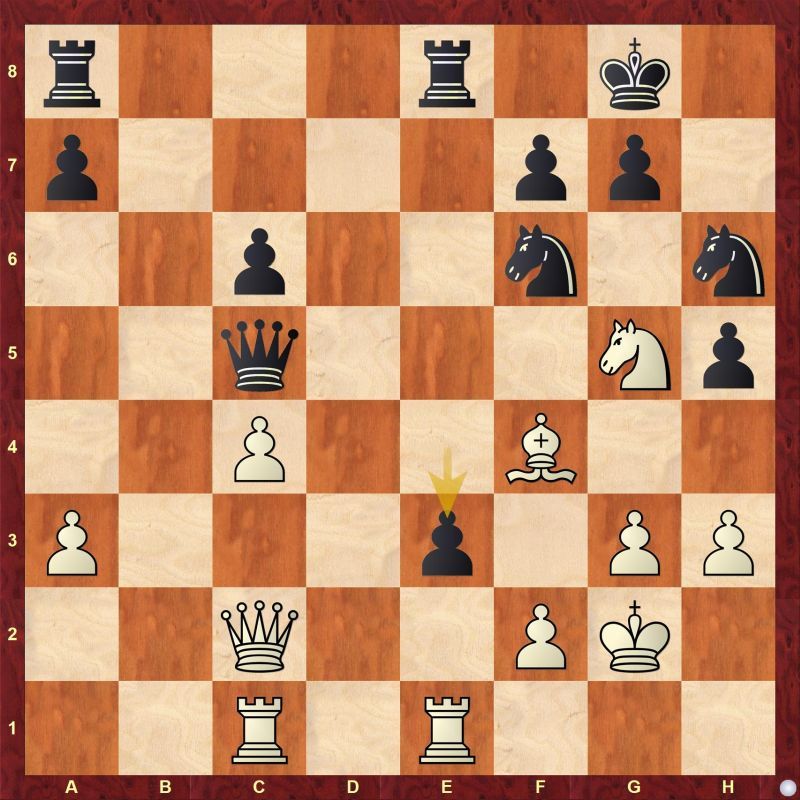 It gave white a chance to bounce back and soon white was presented with an opportunity. 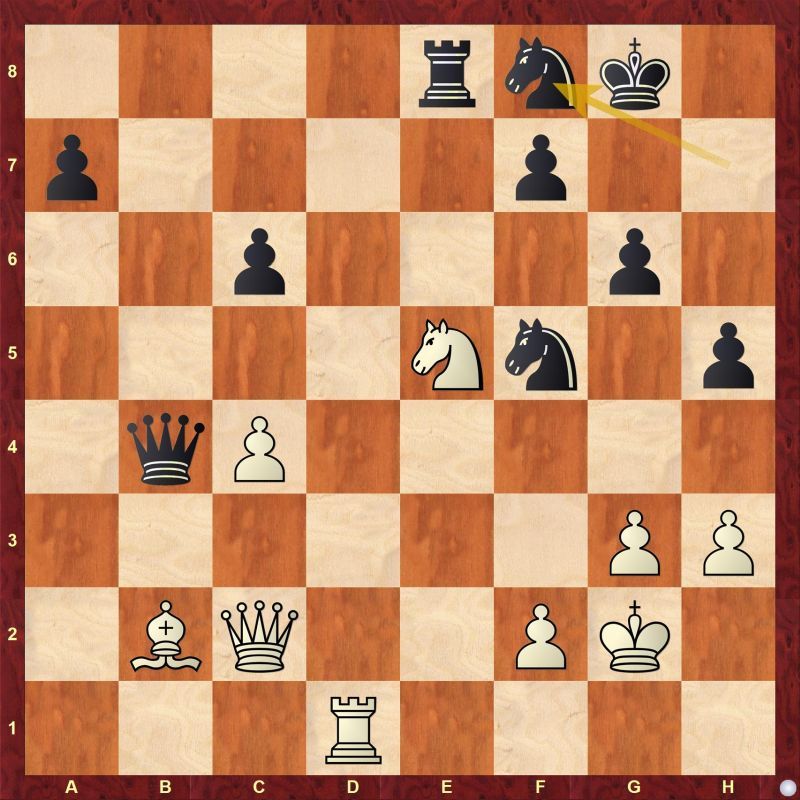 It is evident that white has compensation for the passed a-pawn. What should white do here now? Humpy got the initial sequence correct, but she couldn't follow through. 36.Nd3 Qb7 37.Qc3 is the difference maker. Black missed a simple tactic to equalize the position and instead got into worse situation. 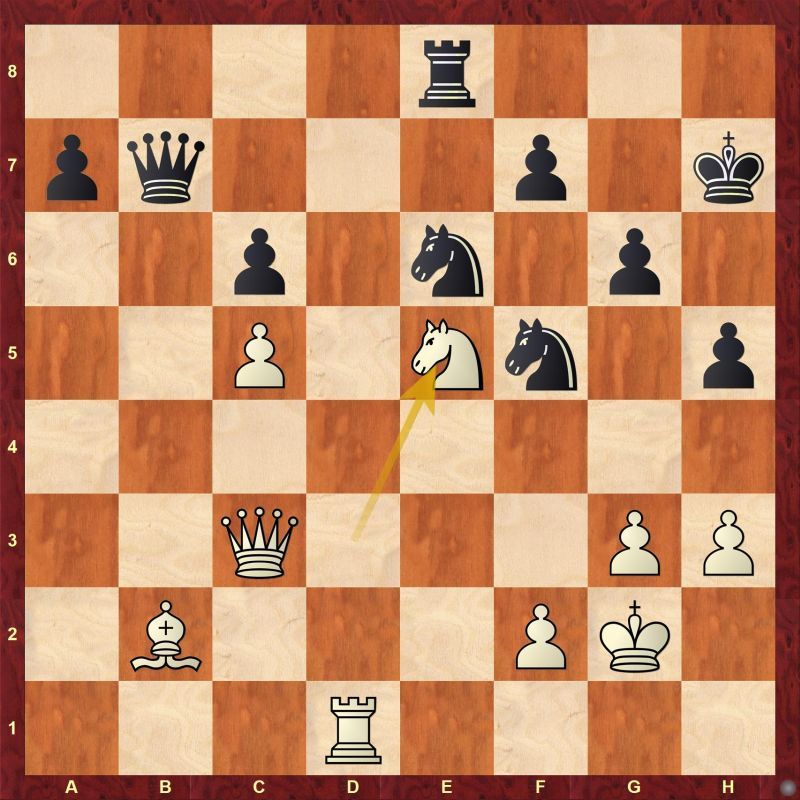 Find out what black missed here after 39.Ne5

Black should have played 39...Nxc5 40.Qc2 Kg8 Zhao continued the game with 39...Rb8 and Humpy wisely retreated her Bishop with 40.Ba1! keeping it the long and important diagonal of the position. Black offered a queen exchange with 40...Qb3 and white invaded the seventh rank with the rook with 41.Rd7 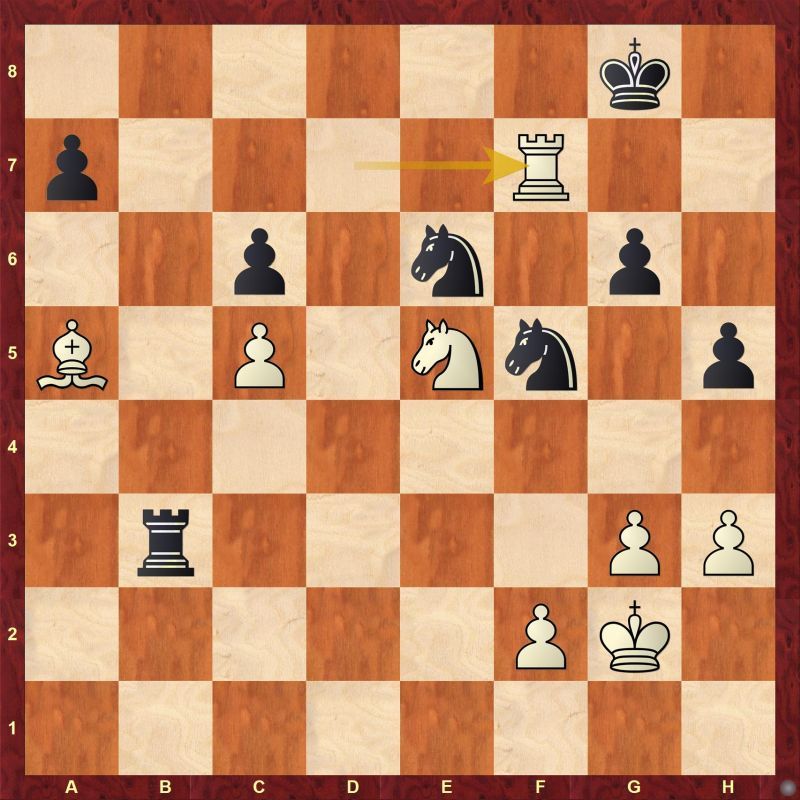 The Chinese GM made a blunder here with 44...Nxg3 when she could have just continued the game with 44...h4 instead and the position would have remained equal. 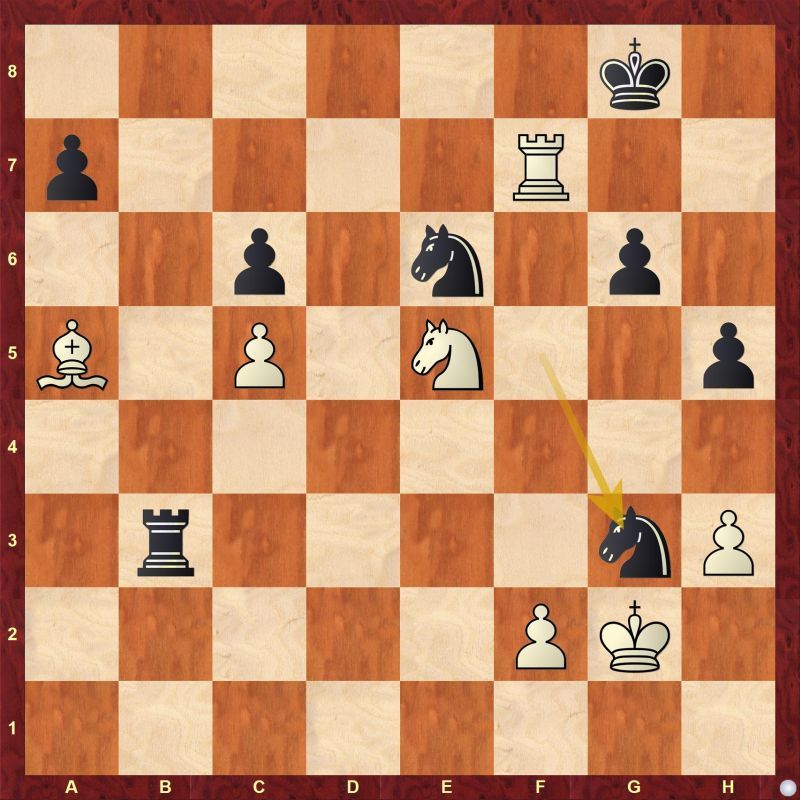 Even if Black continued the game with 45...Re3 still it wouldn't have changed the outcome. The game eventually liquidated into a minor piece winning endgame where white was already ahead in material. It was just a matter of time for Humpy to score the full point.

Anna vs Harika - A short draw

In Sicilian Rossolimo variation, Anna and Harika repeated moves and made a draw in just 24 moves.

In an already minus position, Gunina made an incorrect sacrifice which resulted in her losing the knight for a couple of pawns. 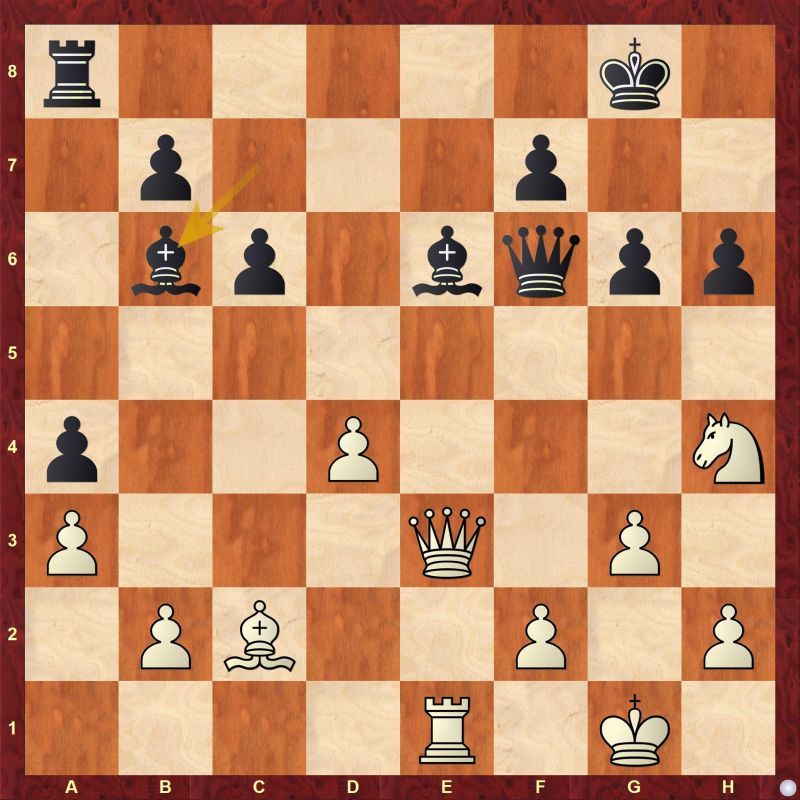 What Gunina needed to do here was to defend the threatened d4 pawn with 26.Nf3

Pia Cramling talks about what she did on the rest day | Video: FIDE

Alexandra Kosteniuk made an unforced error with 19...Bf4. Despite having a pair of bishops, it was Lagno who was in the command of the position. 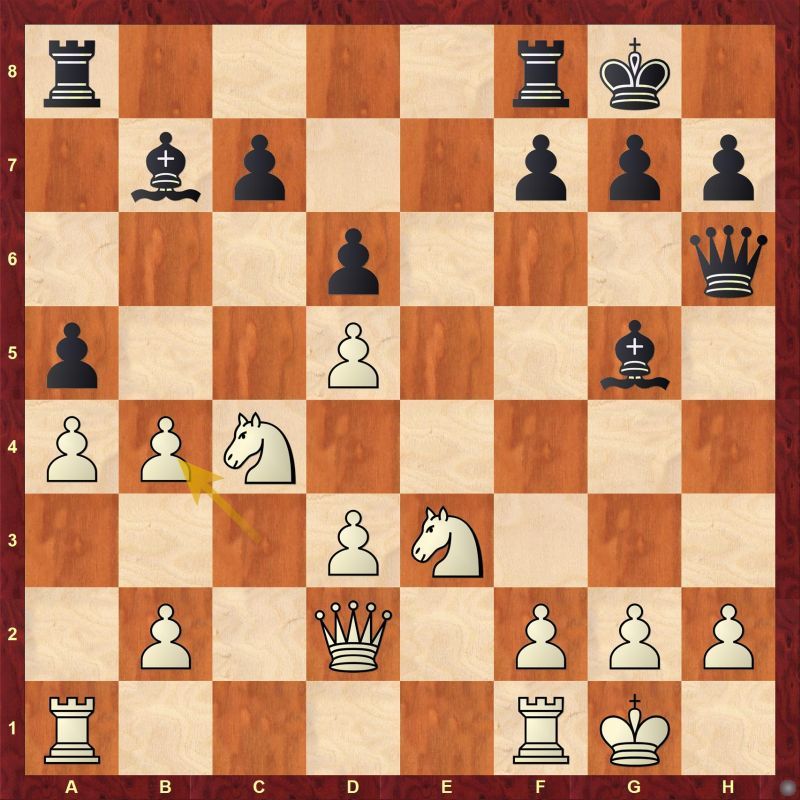 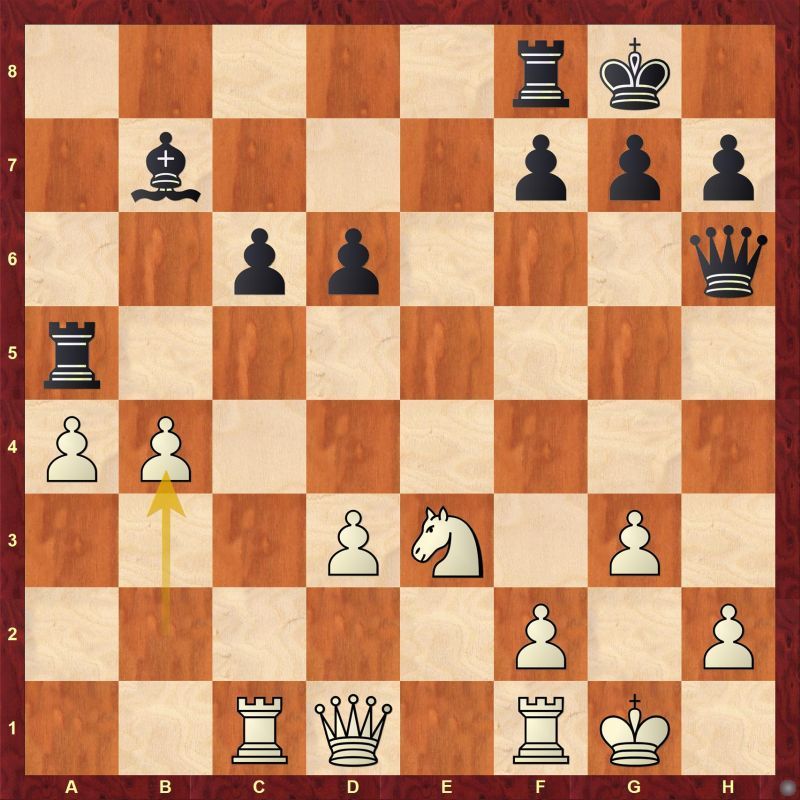 It did not help when black moved the rook to h5 with 25...Rh5. Black should have retreated with 25...Raa8 to make sure the passed a-pawn did not become a monster. 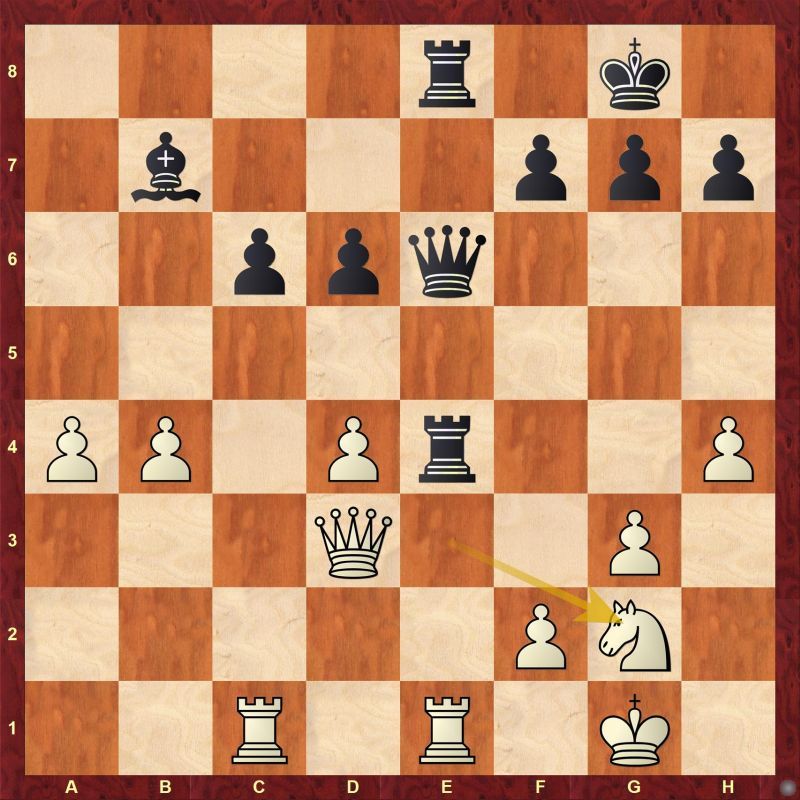 Soon afterwards white forced both rook exchanges with 30.Ng2 and arrived at a completely winning Queen and minor piece endgame for white.

Lagno talks about how she spent her rest day | Video: FIDE

Paehtz lost one pawn too many

Mariya Muzychuk captured Paehtz's pawns one by one whenever she offered them without any significant compensation for it. 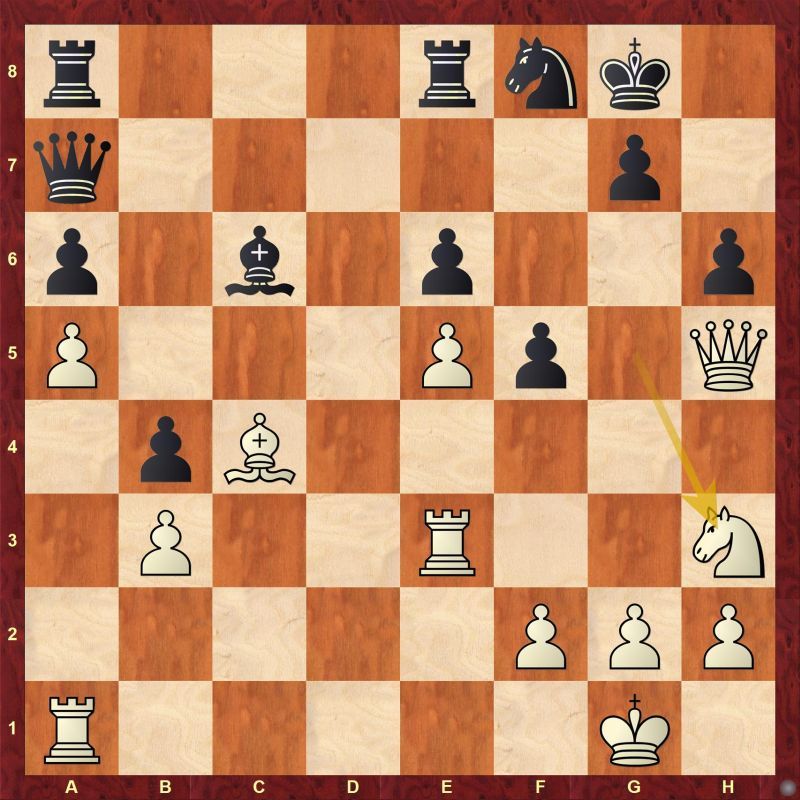 In a seemingly equal position, Paehtz completely ignored the fact that e6 pawn is in a pin which means that f5 pawn is no longer supported by it. Black needed to play 27...Qc5 and then challenge the c4-bishop with 28...Bb5, however, Black developed the rook and lost the f5 pawn. 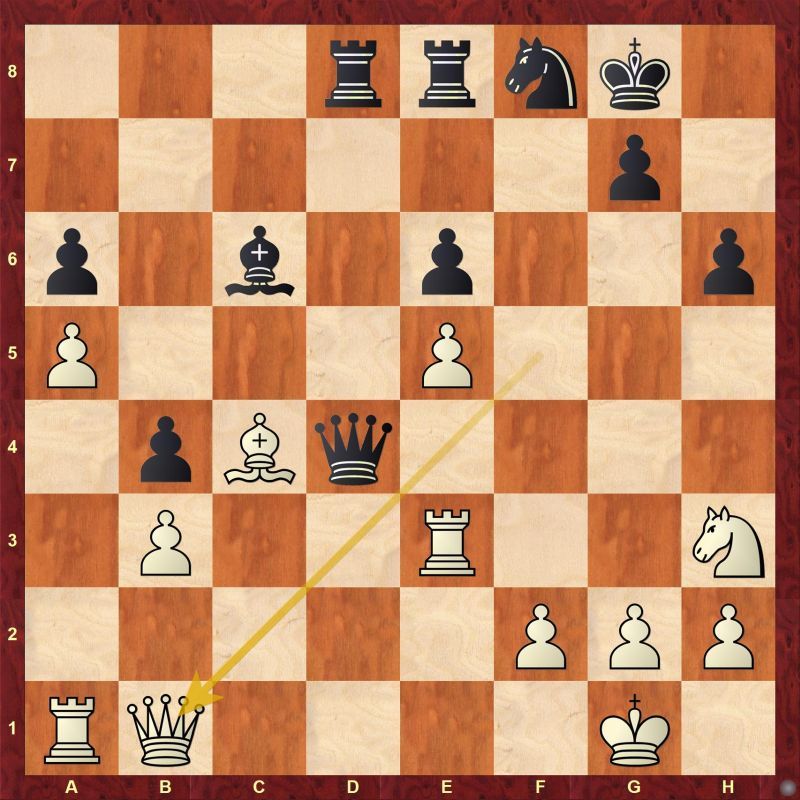 Soon black lost another pawn when she played 29...Ng6. 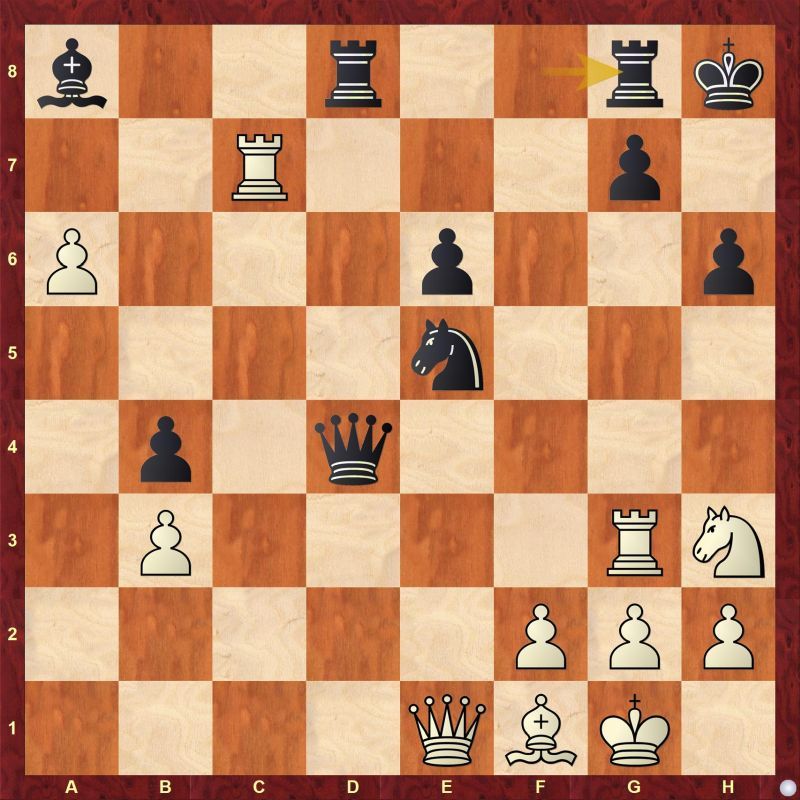 White missed a quicker win here. Can you find it? Mariya had no difficulty converting her advantage to win in another 17 moves.

Mariya talks about what she did on the rest day | Video: FIDE