Gukesh played phenomenal chess in the final day as he won all four of his games convincingly to win Julius Baer Challengers Chess Tour - Gelfand Challenge. He earned a place in the next Meltwater Champions Chess Tour event where he will play against the world's best. Both Gukesh and Praggnanandhaa finished at 14.0/19, however Gukesh's win over Pragg in Round 17 turned out to be important for Gukesh winning the tournament. Nihal 12.0/19 finished at shared fifth place with Abdusattorov and Yoo. Leon was placed ninth 10.0/19. Challengers Chess Tour will return next month with Hou Yifan Challenge from 15th to 18th July. Photo: Champions Chess Tour

After Liang, Praggnanandhaa and Nihal, it was Gukesh's turn to win all of his games on a single day. Gukesh won all four games on the final day when it mattered the most as he beat Leon, Praggnanandhaa, Jonas and Tingjie to finish with 14.0/19, same score as Pragg. However, Gukesh's win over Pragg in Round 17 turned out to be a deciding factor in Gukesh's winning the entire event. Team Polgar has once again beaten Team Kramnik and this time the margin is bigger 101-89. 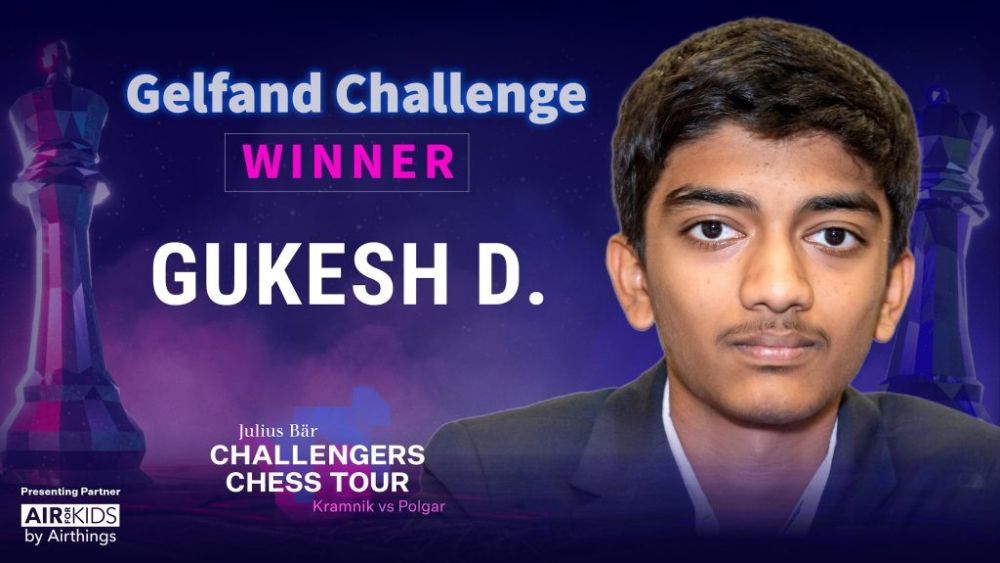 Gukesh described his win to be very unexpected, and he is very happy to win the event. "I was very nervous before the last game because I saw the standings and I knew that if I win the game, it's over".

It is a wonderful week for Gukesh because he got the Wild card for the upcoming FIDE World Cup 2021, qualified to the next Meltwater Champions Chess Tour event and his performance was acknowledged by the man who inspire us all - Vishy Anand.

Round 16: Gukesh and Pragg win

Nihal made a strange backward move against IM Nurgyul Salimova. 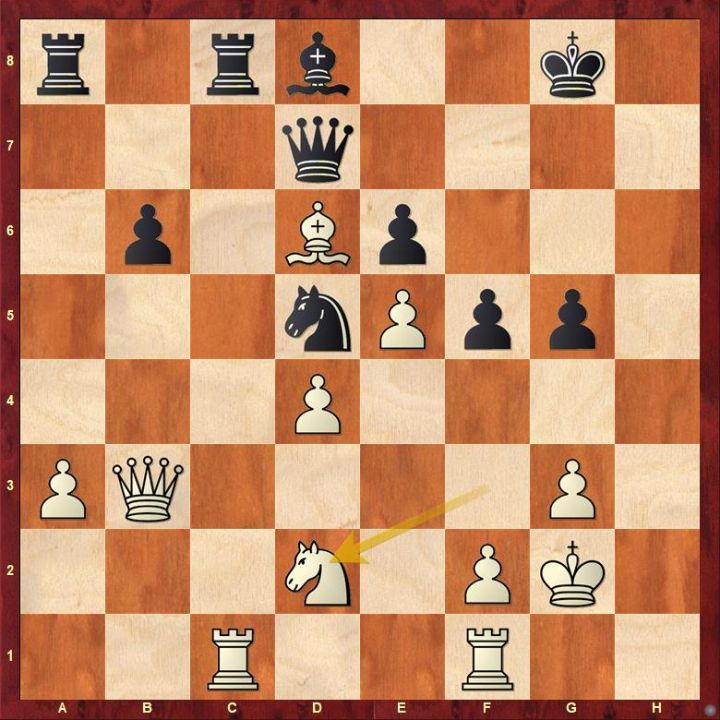 White could have exchanged the rooks at c8 but 31.Nd2 gave black some significant advantage with 31...c4 and future ideas of b5, Bb6 etc. Nihal got a few opportunities to save the game but he missed them all. 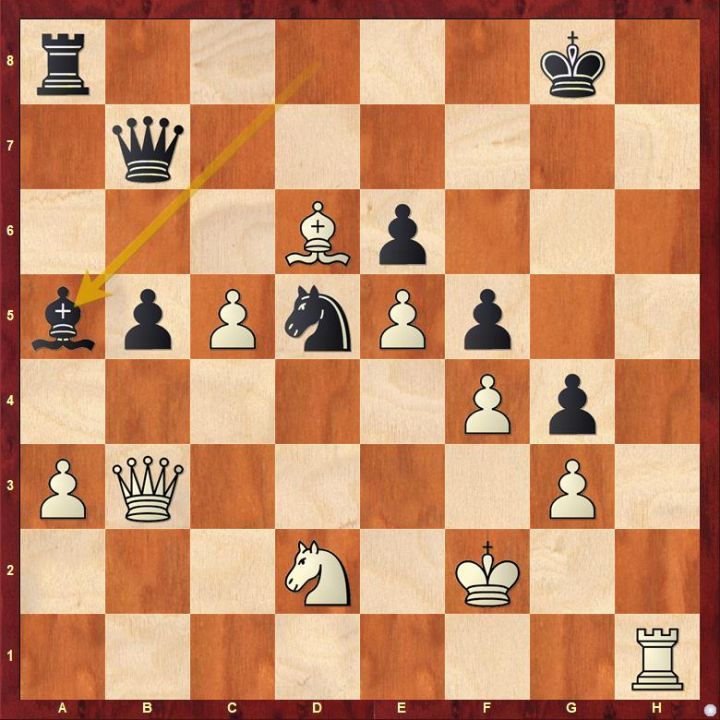 How should White defend the knight in the above diagram? The game went on 37.Nf1 Bc3 38.Rh6 Bd4+ and it was all over for White.

Leon missed a tactical opportunity against Gukesh in the middlegame. 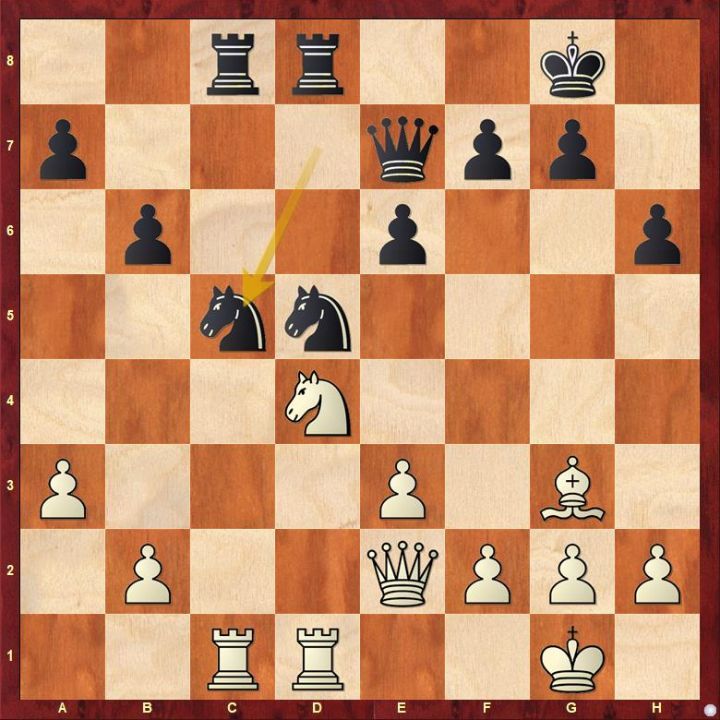 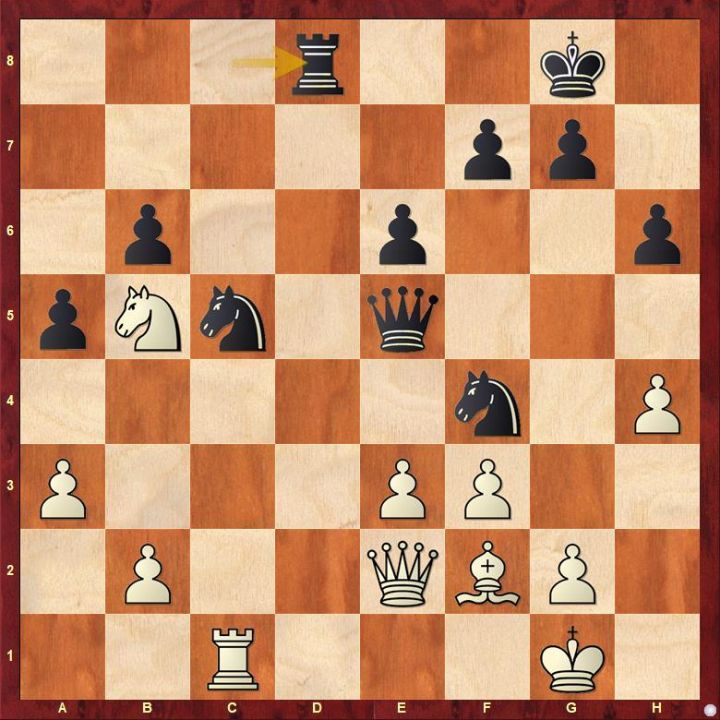 White has very few safe squares for the queen. Where should it go? White played the passive 24.Qf1 which was met with 24...Nfd3 and the game was over in another five moves.

Praggnanandhaa made a short work of IM Christopher Yoo as he decided to capture a poisoned pawn which led to his queen getting trapped. 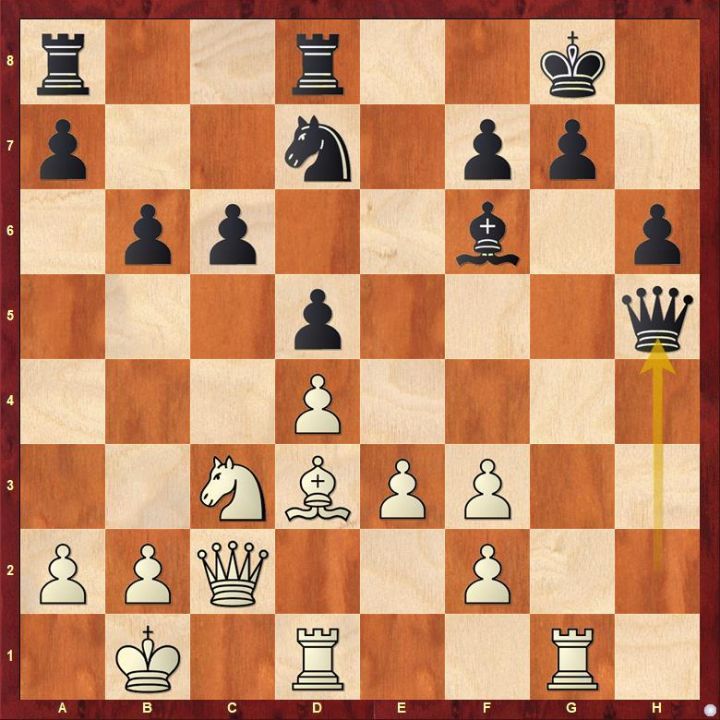 Find out how to trap the black queen after 18...Qxh5. Praggnanandhaa found it easily and won the game in another six moves.

Gukesh scored an important victory against Praggnanandhaa which eventually turned out to be the deciding factor in him winning the event. Nihal won and Leon drew their respective games.

Pragg played a bit passively early in the middlegame. 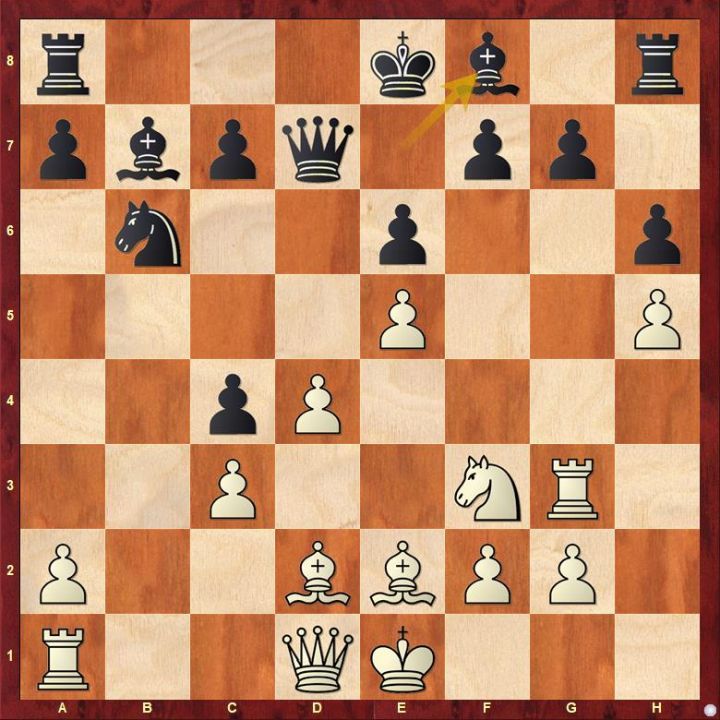 Instead of 16...Bf8, Black could have played actively 16...g5 17.hxg6 fxg6 18.a4 a5 etc. Gukesh slowly outplayed Pragg as his position was cramped and he was running out of decent moves.

In a relatively equal endgame, GM Awonder Liang made a lapse in judgment which allowed Nihal to launch an attack on his opponent's king. 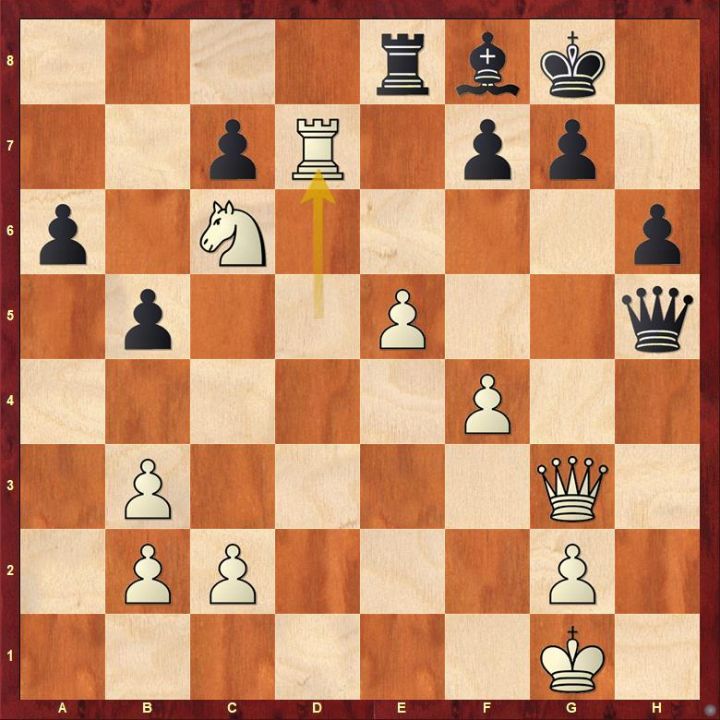 White could have played 31.Qf3 and everything would have been fine but 31.Rd7 invites trouble as 31...Bc5+ starts a barrage of attack, one which White cannot thwart with ease. Later Liang blundered his rook which Nihal initially missed, only to capture it in the next move, resulting in his opponent's immediate resignation.

Round 18: Nihal, Leon and Gukesh win

Nihal, Leon and Gukesh won their respective games. Only Praggnanandhaa was held to a draw.

IM Sara Khadem decided to capture a poisoned pawn which sealed her fate. 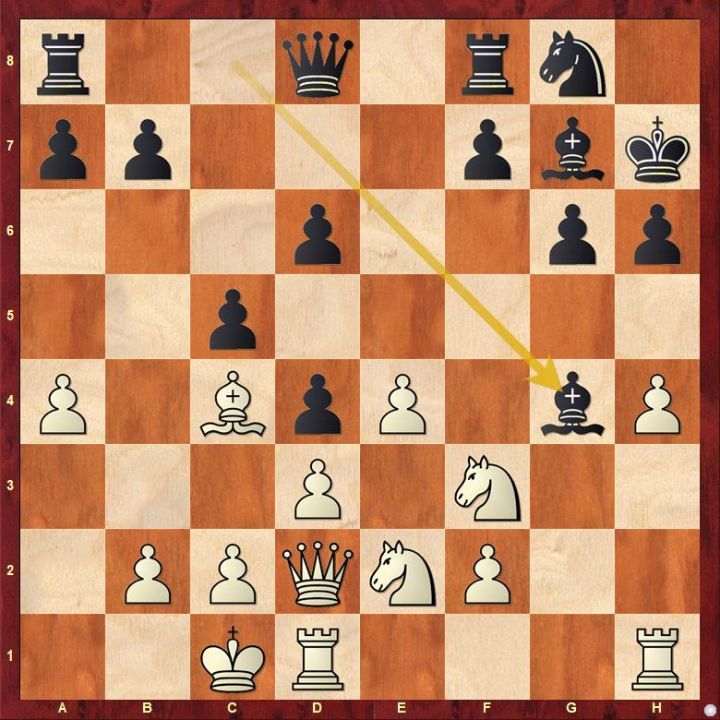 Find out the best continuation for White in the above diagram.

Salimova made a simple checkmate threat against Leon's king but she did not figure it out that it will end up backfiring her. 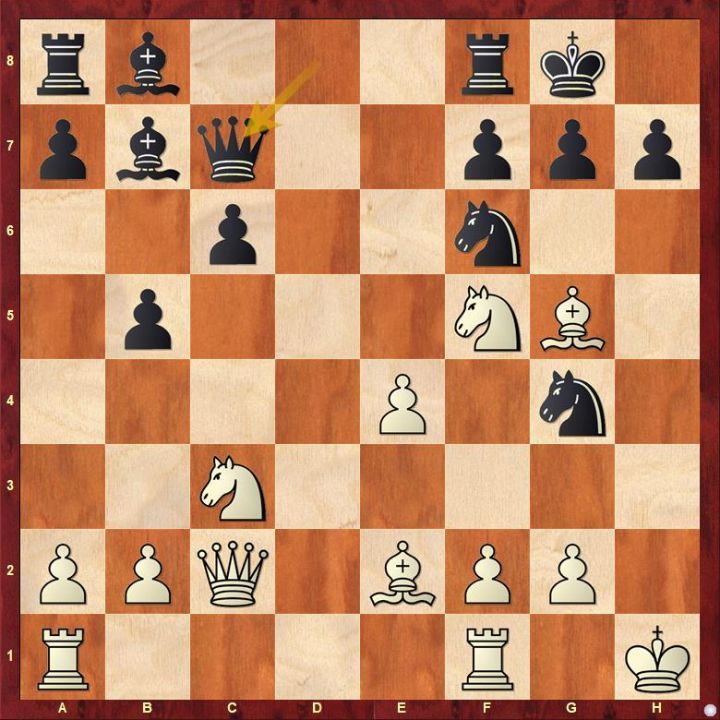 Black has made a checkmate threat at h2 but it is actually a big mistake. Try to find out why.

Badelka once again played very solid. Pragg declined a repetition and pushed for a full point but the Belarusian managed to not make any mistake and make a draw.

Danish GM Jonas had an opportunity to play an interesting line but he opted to play it safe against Gukesh. 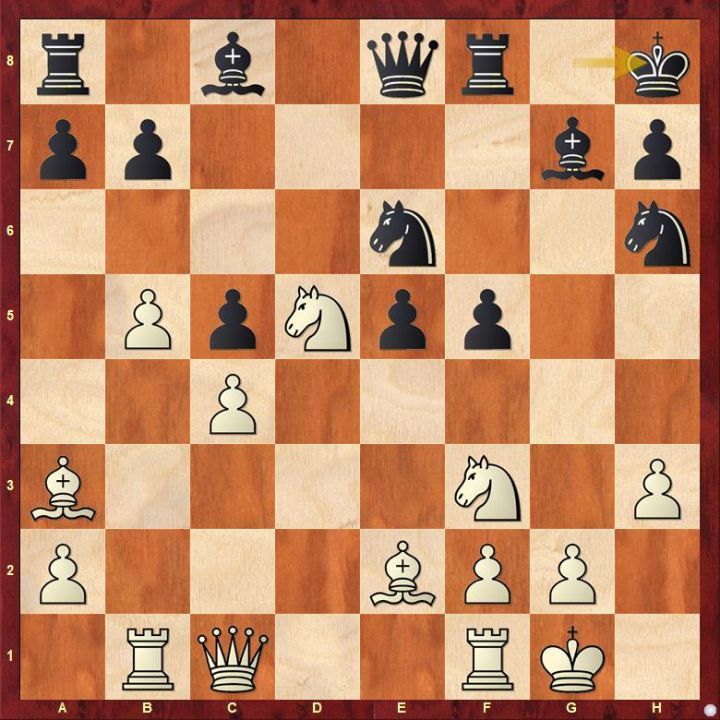 Can you find the interesting continuation for White in the above diagram? The game continued 19.Ng5 Nd4 20.Bd1 and White got no further interesting opportunities. Gukesh eventually did a beautiful combination to win the game. 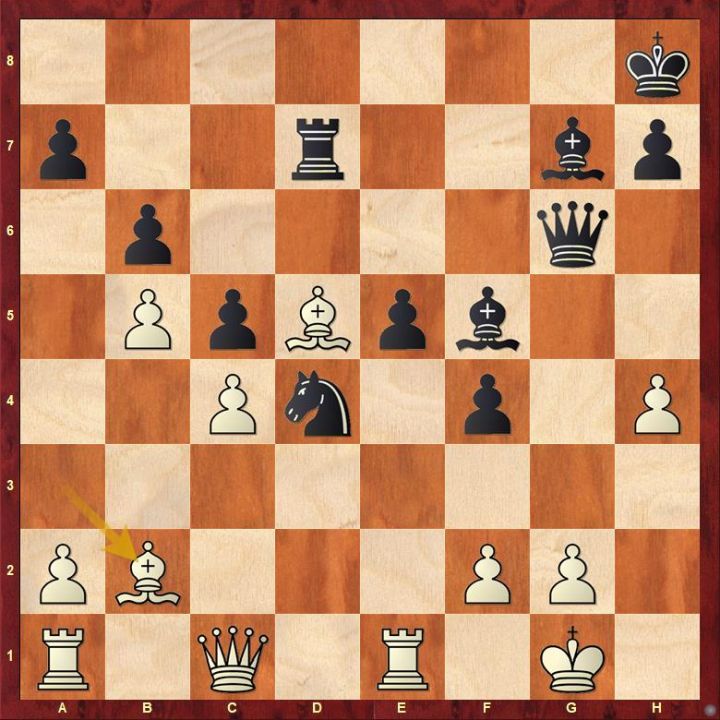 Find out the winning combination for Black which Gukesh did in the above diagram.

Round 19: Gukesh and Pragg win

Gukesh scored a fantastic victory in the final round against GM Lei Tingjie. He showcased his brilliant understanding and outplayed his opponent positionally in the middlegame and also played the endgame really well.

Salimova made a simple tactical error which cost her material and the game.

Leon defended a difficult postion well against Liang and eventually got a perpetual check to make a draw in a challenging endgame.

Nihal had a tough finish as he lost the final round game against IM Volodar Murzin. 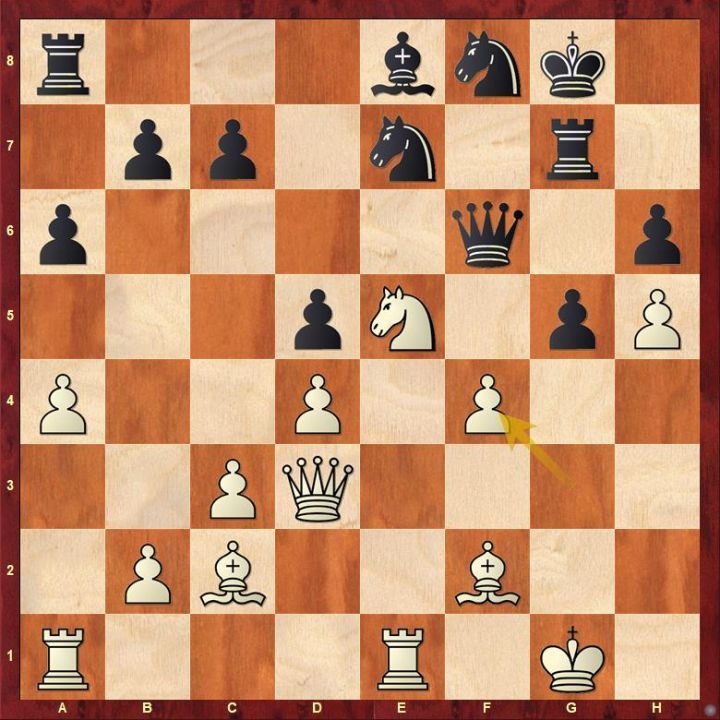 Black needed to play 33...gxf4+ and things would have been fine but instead 33...Bxh5 allowed white to continue the onslaught 34.Qh3 and eventually checkmate him.

Final Standings after Round 19

Gukesh and Praggnanandhaa both finished at 14.0/19 | Photo: Champions Chess Tour