India's 19th Grandmaster Sundararajan Kidambi writes on Rathnakaran's latest incredible Queen Sacrifice against GM Mikheil Mchedlishvili (2609) of Georgia in round 3 of 2nd Goa GM International Open 2019. This is Kidambi's second post of the month on his blog after more than a yearlong hiatus from blog posts. We all are aware of Kidambi's impeccable knowledge of the game and how meticulous he is with his analysis. In this article, he discusses the game with incredible details. He also shares past instances of sacrifices in Rathnakaran's games. Photo: ChessBase India archive/Niklesh Jain

According to the wizard of Kozhikode

After Murali's Queen sacrifice in Asian continental, another game featuring an even more spectacular Queen Sacrifice started making rounds across the internet chess audiences. This happened in a game between Grandmaster Mchedlishvili and International Master Rathnakaran in the ongoing 2nd Goa international chess tournament. I have been meeting Rathnakaran right from my junior days in various events. I can't remember even one occasion of not greeting me with a smile! A very pleasant and nice chap, but when it comes to Chess he becomes totally transformed. He could sacrifice many a material with utter disdain, but he would never take his eyes off your King for all his other niceties! As a player he is quite unique in modern Indian circles, as far as I know he is perhaps the only player who has no formal chess training, no deep study/preparation and a skill and understanding that is completely honed by self learning by playing tournament games as well as Blitz and Bullet online. So, nobody really knows how he perceives chess (not even himself!) and he lets his moves speak for him, When I came across his recent interview to Sagar Shah (immediately after the game) I really enjoyed listening to it. Sagar has done a great job of making Rathnakaran speak a few things about the game which give a glimpse of whats happening behind the scenes in his mind! This was extremely interesting and I think it would benefit chess lovers at large, so I am discussing the game with some comments of my own. I also kept in mind not to interfere the artistic aspect of the game and have reduced my comments to the ones which are absolutely necessary and in a way not to obstruct the view of Rathnakaran's comments. 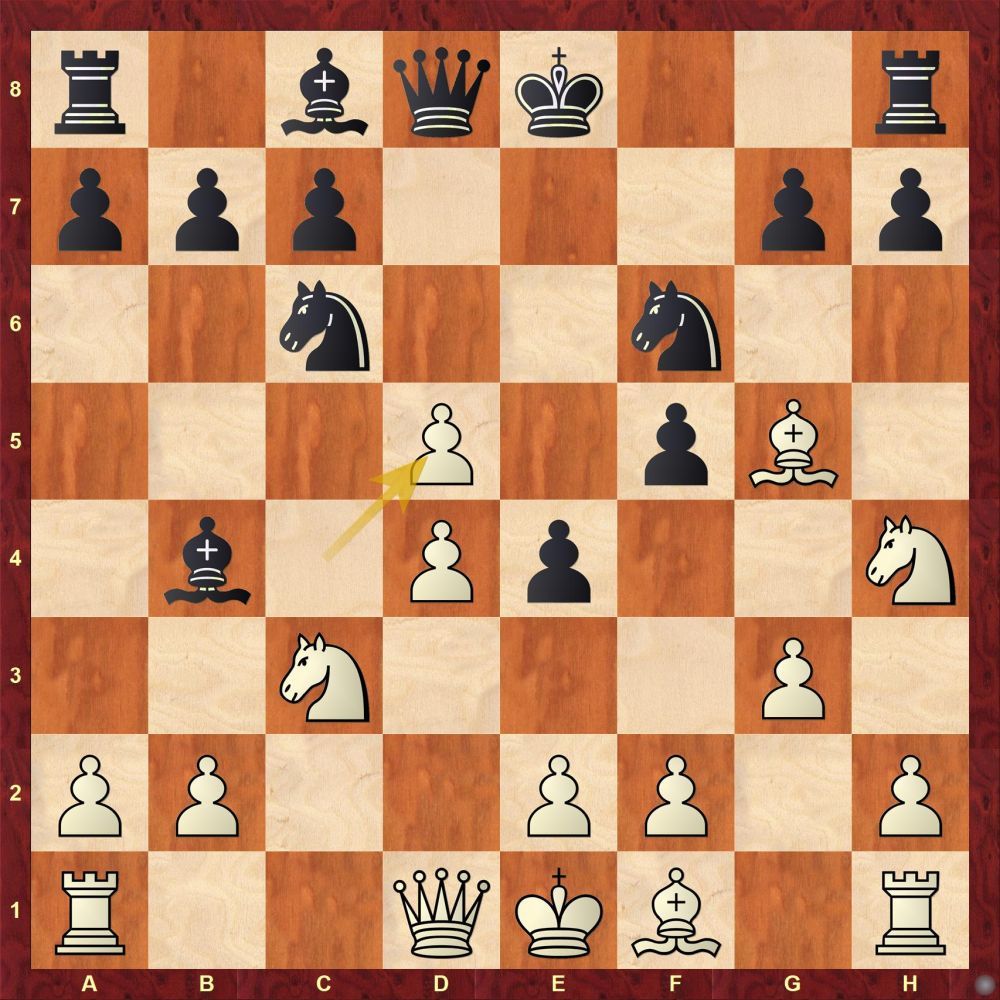 We join the action after white's 8th move cxd5. All the games that reached this position earlier continued with the "normal" 8...Qxd5. But Rathnakaran did not like the fact that White could take 9.Bxf6 and gain control of the f4-square for his Knight. Because of this he decided to play the incredible 8...Nxd5!! sacrificing his Queen for at the moment only one minor piece but holding the initiative. Knowing Rathnakaran I can be very sure that this was pure improvisation and a decision that he would take very naturally. Even then, as a spectator it still thrills me to see such flamboyance exhibited! The game continued with 9.Bxd8 Nxc3 10. Qb3 Nxe2! 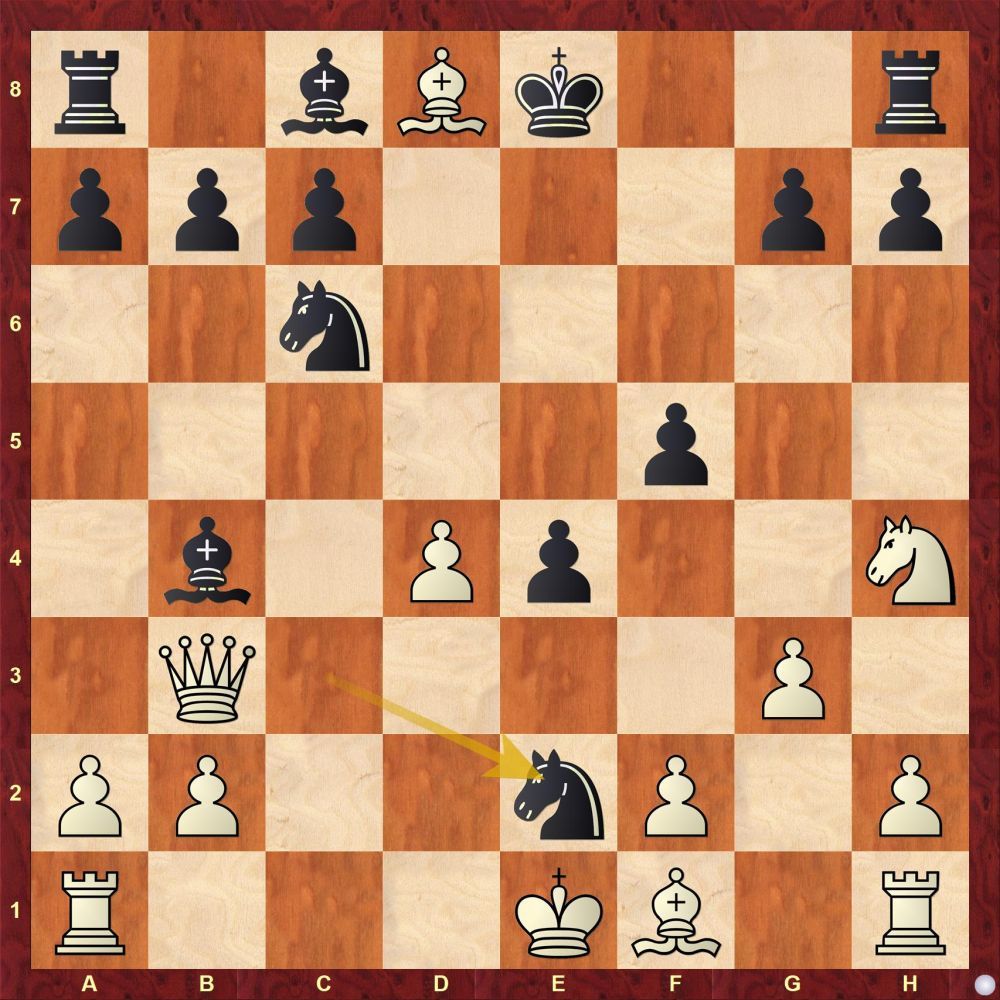 As Rathnakaran points out he was considering not to take the pawn with 10...Nb5!? in order to keep the Bishop on f1 shut. But he felt that taking a pawn was important and also more than that white's e-pawn can at a later point of time, drive away the Black's Knight(s) from the d4 square with an eventual e2-e3. The game continued with 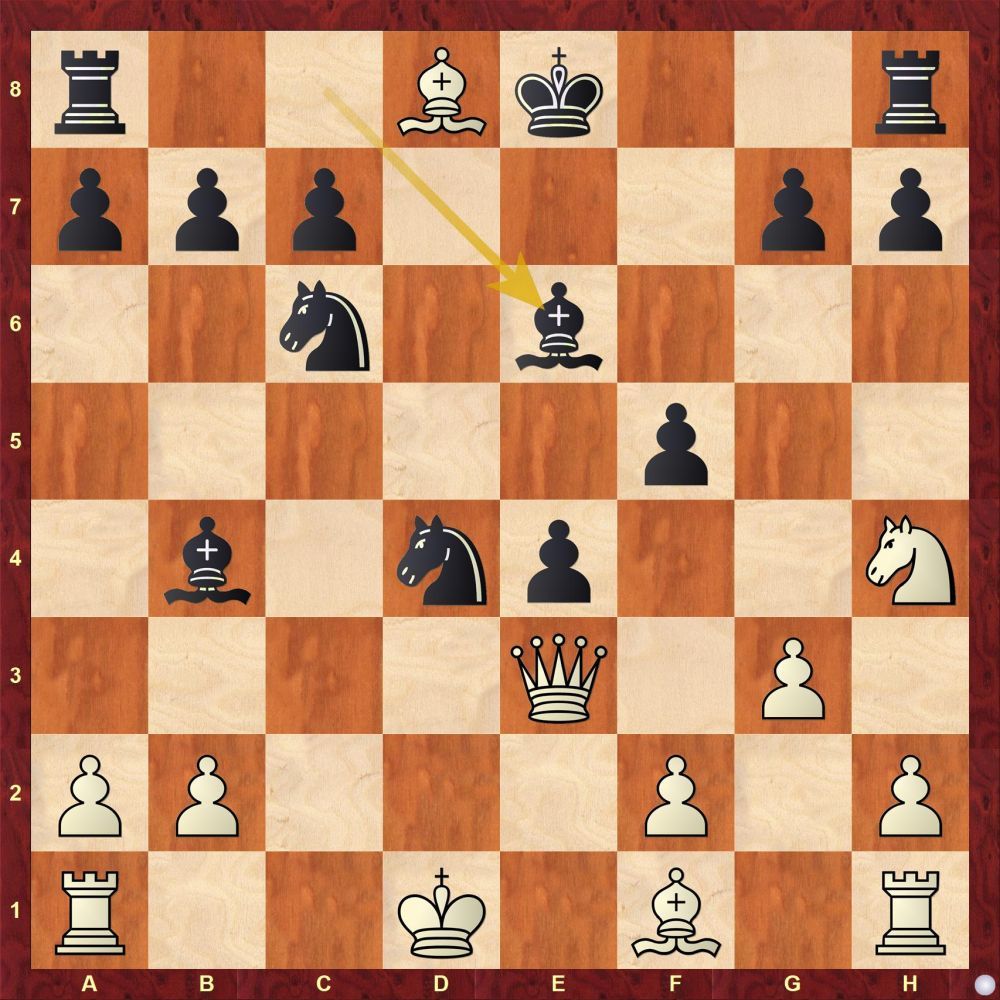 This is such a pretty move, Black is in absolutely no hurry to regain some material at all. Instead he simply focuses on bringing more pieces into play and retaining the coordination in developing an attack. At this moment Sagar asks why Rathnakaran didn't take back the piece on d8 with his King, to which he simply answers that it is passive! And the next question and answer actually was the highlight of the whole interview for me. Sagar says that White has lot of options and that Black has only one minor piece for the Queen, to which Rathnakaran's one word answer sums up everything "But King d1"!!!! This to me is the summation of Rathnakaran's chess philosophy, Time over material and he never takes his eyes of the ultimate goal of chess-Checkmate! 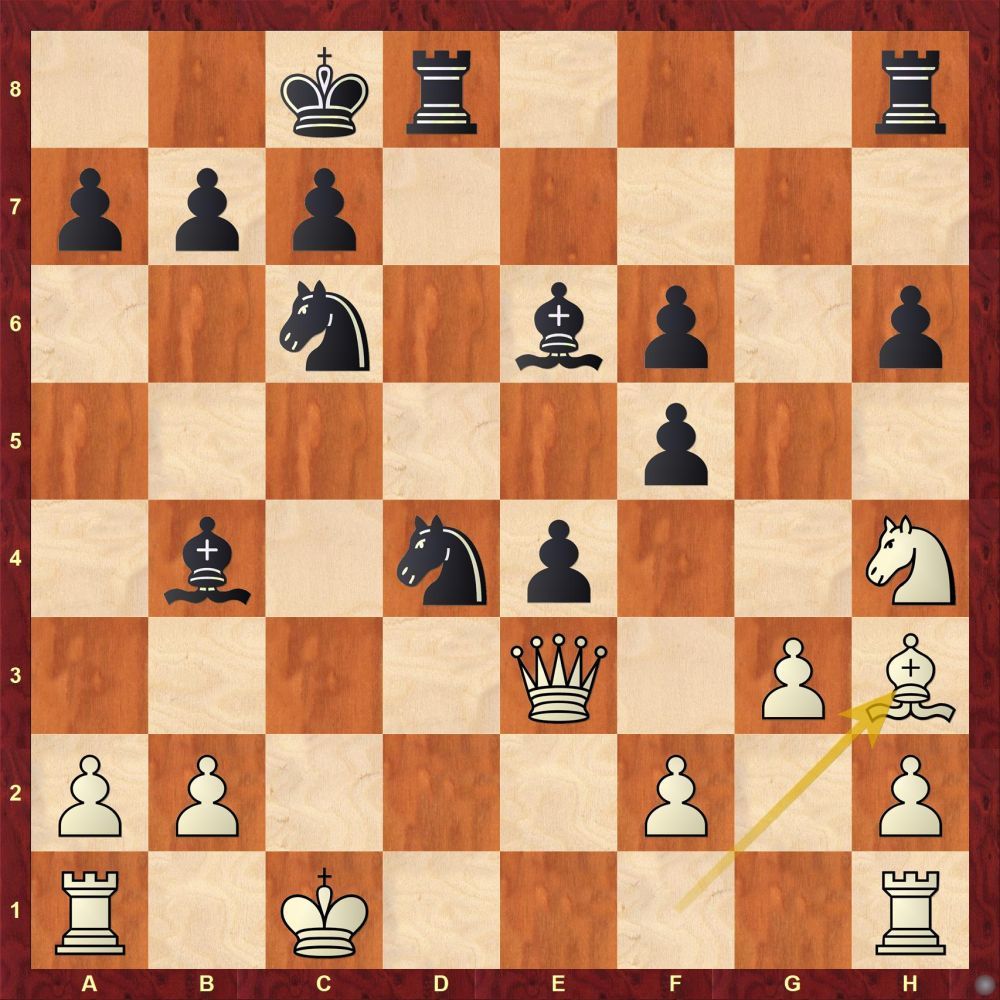 and here we perhaps come to the critical position of the whole concept behind this sacrifice. Here the game went 16...Bc5 When discussing this position with Sandipan Chanda he pointed out to me that while he was watching the game live, he felt that this was the key moment where Black went wrong and most likely he missed White's response. Pondering over this position I considered the continuations 16... Kb8, 16...Rd5, 16...Bc4 and 16...Ne5 The details of the variations can be seen in the replayable version of the game I will be attaching towards the end.

As Sandipan also pointed out after briefly checking with the engine Black's strongest continuations were 16...Kb8, 16...Ne5 and also 16...Ba5 . In his opinion objectively Black lost the thread a little bit after allowing White to answer 16....Bc5 with 17.Bxf5! the point being 17...Nb3 + fails to 18.Qb3 and the Bishop on e6 is pinned. A very interesting observation which happens time and again to every practical player! 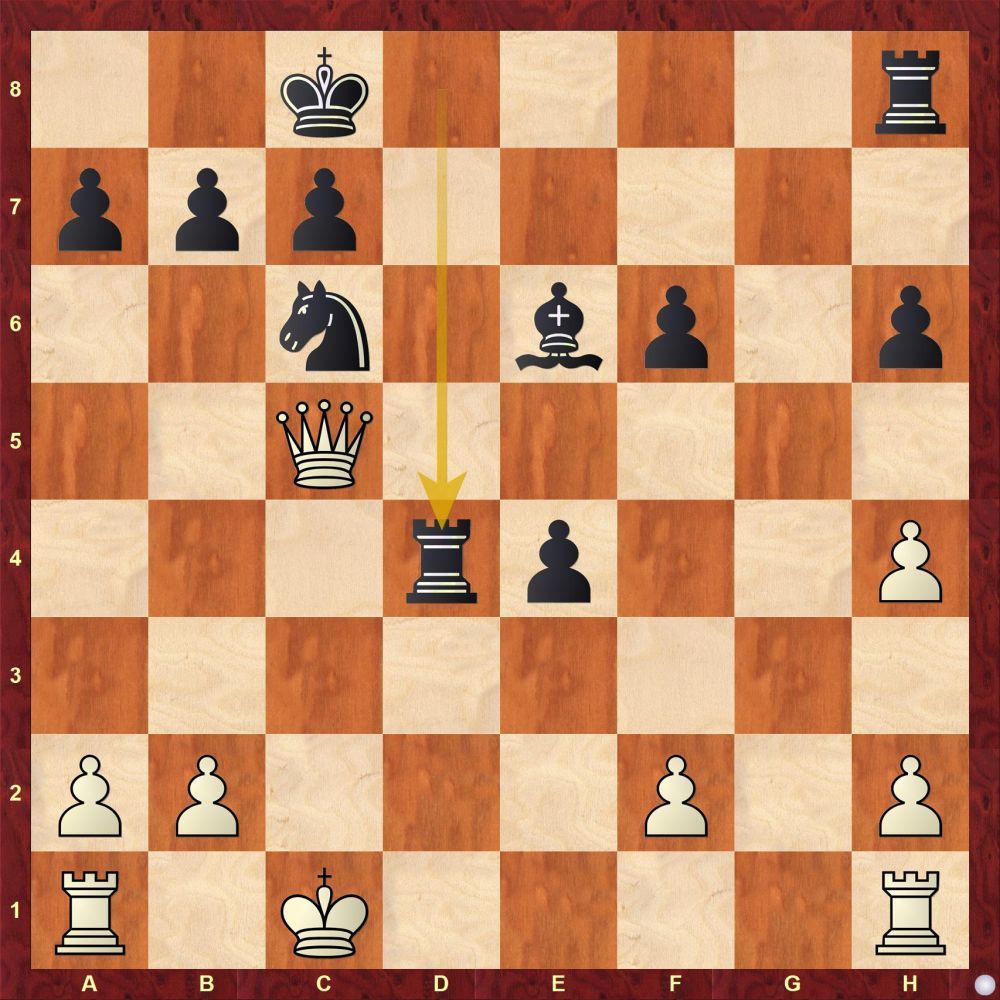 I like the brevity of Rathnakaran's comments here ala Bronstein. He says he felt that he had a minimum draw here. He says White's rooks are not connected and he has threats like Bg4 and Ne5( after doubling the rooks) and he only needs to take care of a7-pawn!

There were of course lot more interesting moments which I give below in the repayable board. I really liked the way the game went on and how Rathnakaran kept on adding fuel to his initiative and at the end even the strong and experienced Georgian GM has to concede defeat, which only shows the difficulty in defending such positions for anyone! I have included all Comments of Rathnakaran and some of my own thoughts with some suggestions from Sandipan.

Here is a link to the wonderful interview:

I like to sum up the above game thus:

1. I feel this is a very different type of Queen Sacrifice (albeit with the same material compensation) compared to the Firouzja-Karthikeyan game.

2. Here the compensation is very dynamic and depends wholly on the weak king of the opponent.

3. Pawn structure does not play as big a role as in the other game.

4. The coordination and cooperation among the attacking units is a telling factor.

5. And if I may borrow Capa's expression, 'Direct attack En Masse' seems to be the order of the day!

For non Indian readers who do not know Rathnakaran, I can recommend Parimarjan Negi's wonderful column in 2 different issues of New in Chess Magazine namely 2015/3 and 2016/8. He discusses two of his games against Rathnakaran (Delhi 2007 and Mangalore 2008) and also one of Rathnakaran's games against Sethuraman (Bhopal 2013).

To conclude I offer one of the most fascinating positions I have ever seen from the wizard of Kozhikode. 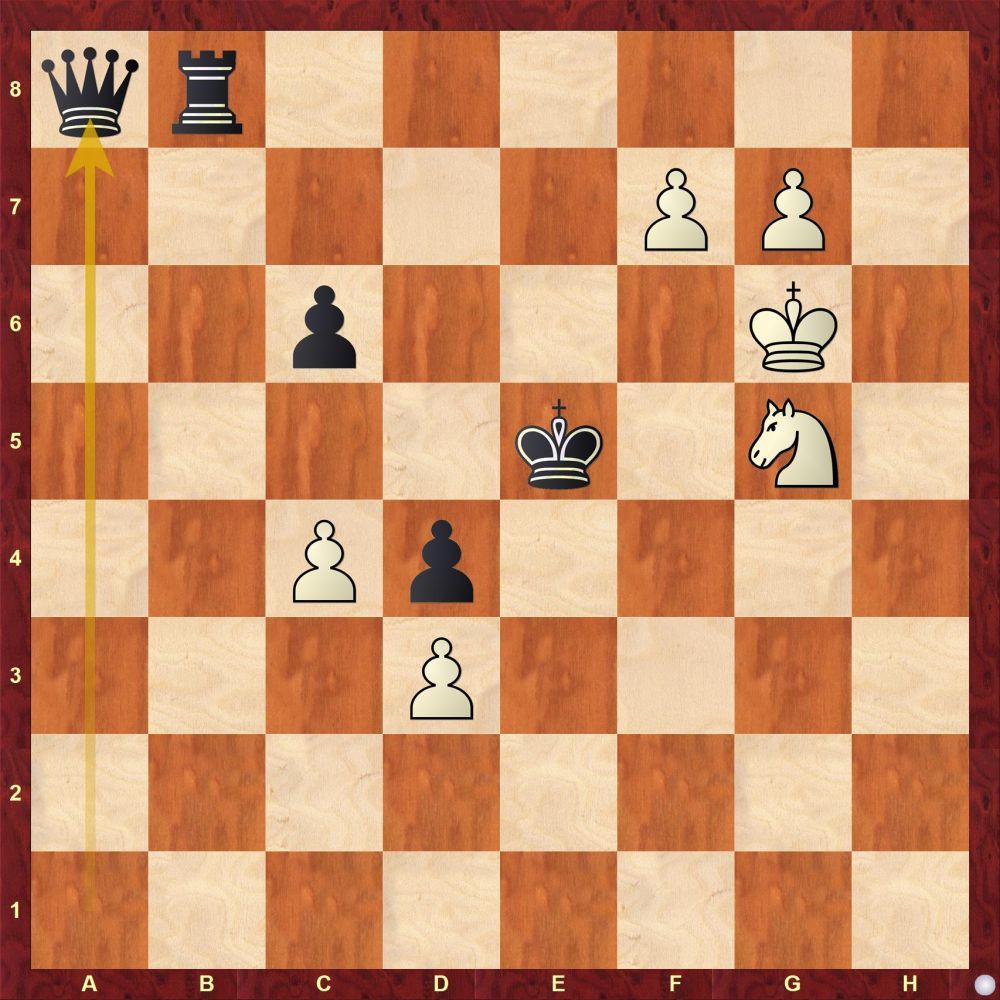 This is the final position of his drawn game (he is white) against Grandmaster P Karthikeyan in the National Championship 2018. Interested readers can check this game online, to me this is beyond words and explanations! I thank Sagar for the interview, Sandipan for his comments and Satyapragyan for turning my attention towards the game while it was happening!

GM Sundararajan Kidambi is considered by many Indian players as the one with impeccable knowledge of chess classics | Photo: ChessBase India archives

ChessBase India is happy to see GM Sundararajan Kidambi making his second post of the month in his blog "Musings on Chess". Knowing what an encyclopedic knowledge the grandmaster from Chennai possesses, I think we are in for a treat! One can only hope that Kidambi continues writing regularly! We will keep reminding him about it!