As things keep changing and evolving over time, the fundamentals remain the same. All the greats repeatedly keep emphasizing on studying the classics because if your fundamentals are strong, understanding complex concept becomes that much easier. The man who has an impeccable knowledge of the classics, Sundararajan Kidambi talks about the importance of fundamentals with some illustrative examples, starting from Arjun Erigaisi's game against Aronian from the recently concluded tournament Goldmoney Asian Rapid to going as early as Prague Olympiad 1931. Enjoy this beautifully explained concept by Kidambi. Photo: Rupali Mullick and Shahid Ahmed

"In chess the tactics may change but the strategic fundamental principles are always the same, so that Chess Fundamentals is as good now as it was thirteen years ago." - Capablanca

Control of centre has been considered as the heart of Chess strategy from time immemorial. But as the Cuban World Champion has pointed out, the fundamentals remain the same, though application may change in the course of time. I quote Capa from his edition of Chess Fundamentals in 1934:

'In chess the tactics may change but the strategic fundamental principles are always the same, so that Chess Fundamentals is as good now as it was thirteen years ago. It will be as good a hundred years from now; as long in fact as the laws and rules of the game remain what they are at present.'

When Chess fundamentals was released for the first time in 1921, the Hypermodern era in chess had not flourished in full flow, whereas thirteen years later it had a great number of adherents - Reti, Nimzo, Tartakower to name a few and not to be left behind were the World Champions Alekhine and Capa too!

The Hypermodernists as they liked to call themselves came up with an idea that centre control need not be achieved only by pawn occupation of central squares, but can equally be done from pieces controlling the centre from flanks. Coming back to the Cuban genius' comment, the fundamental principle of central control is all-inclusive and gives one room for improvement as and when the situation arises. This is a typical feature in any artistic endeavour.

While taking a look at a recent game of Indian Super talent Erigasi, these thoughts about central control by various means were sparked. What if a flank pawn was given up in return for a central one in order to acquire control of central squares? Surely this must be a method envisioned by Hypermodernists, right? 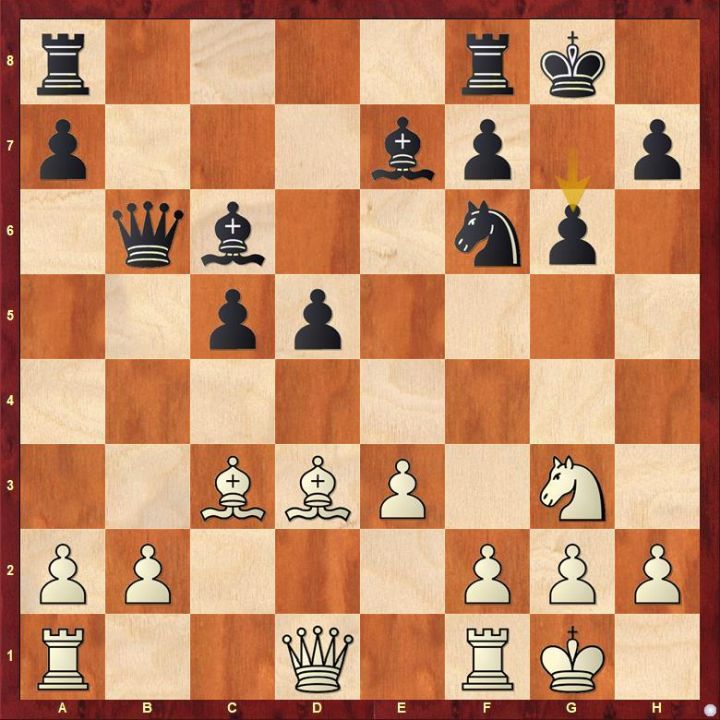 This is a position from the game Erigasi versus Aronian from the recent event Goldmoney Asian Rapid 2021.This is a normal looking position in a Hanging Pawn's structure. Here Erigasi continued with

which sparked added interest into a position with dynamic equilibrium. This is a real sacrifice of a pawn, which cannot be regained by any forced sequence of moves. So, what is the logic behind such a venture? White, wants to secure the central d4 square firmly in his control for occupation of his dark squared Bishop. The opened c-file can be a factor later on in the game. In the shorter run, White gains a few tempi with which he can build upon his initiative on the Kingside. Of course, he also runs the risk of remaining a pawn down for the whole course of the game against none other than Aronian! And bearing in mind that this was a rapid game, the intuitive decision is even more commendable! 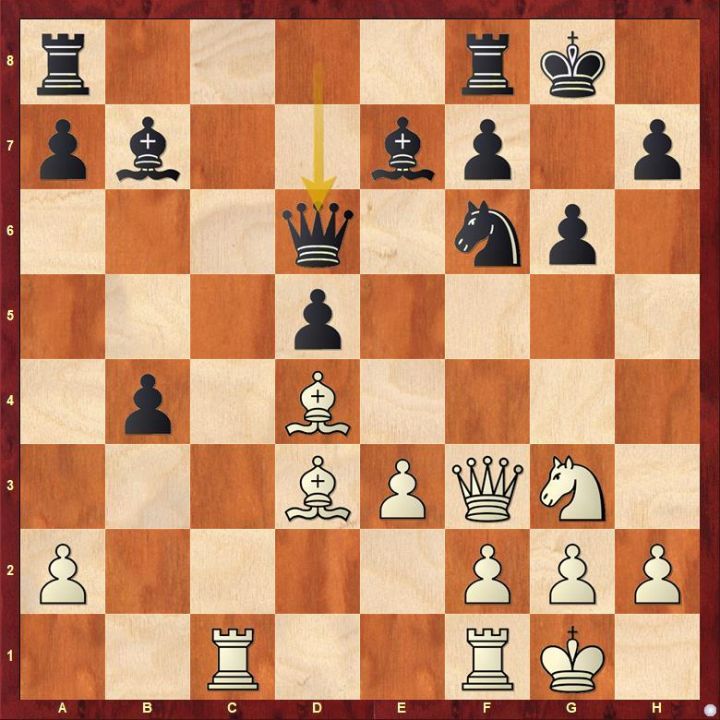 In the last few moves White has gained a few tempos to bring his pieces into the striking zone of Black's kingside. He continued amassing more forces with 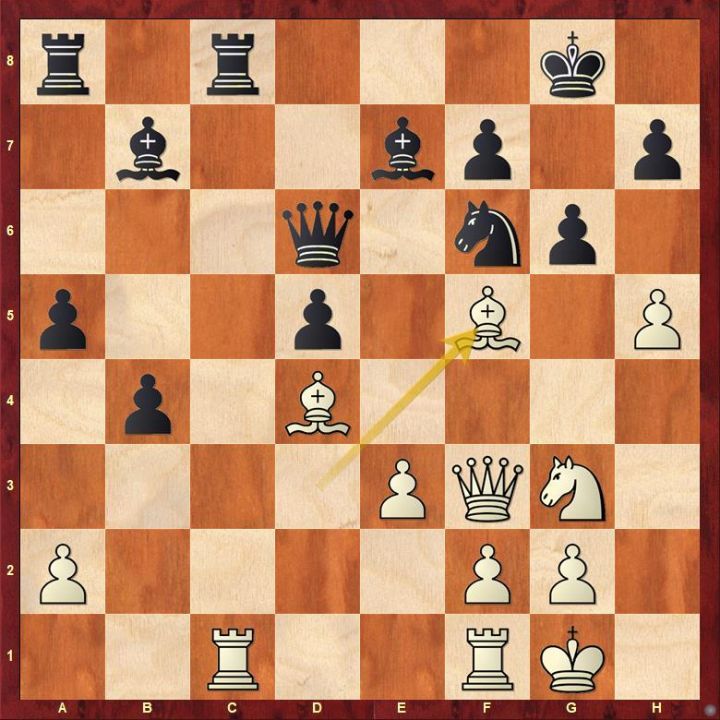 Not a difficult tactic based on overload, but nevertheless a pretty one! Of course, Black cannot recapture with 22..gxf5 because of 23.Nxf5 and Black's Queen is powerless to stop either a deadly check on g3, or defend his Bishop on e7. The game continued with

Perhaps it is here that Black starts drifting. Maybe Black could try to contest the c-file via 6th rank with 23...Ra6!? I have a feeling White has positional compensation for the pawn deficit, but this is debatable! 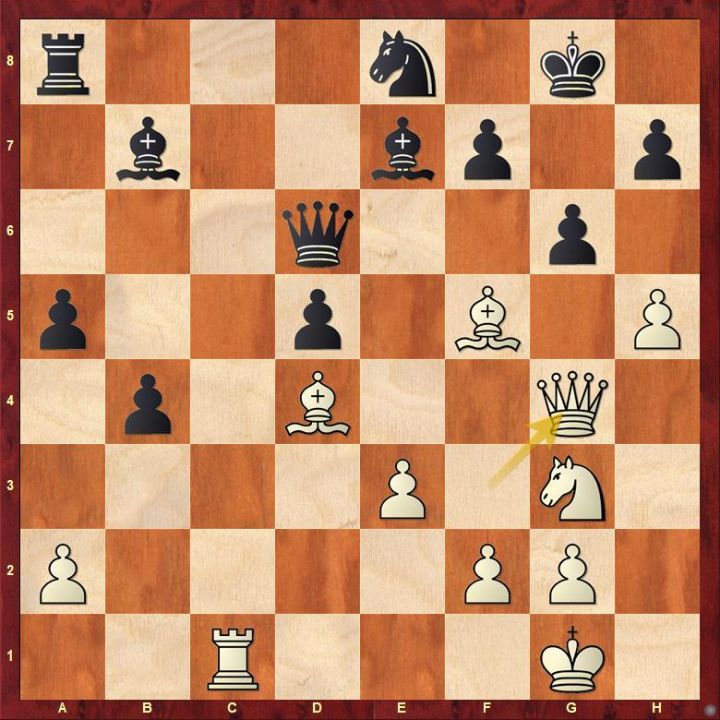 White has slowly but surely moved his pieces near the striking zone, and Black falters falling prey to a cute though not a standard tactic. Black continued with

Black apparently can still hold his fort with 24...Nf6 25. hxg6!? hxg6 26.Qg5 Nh7! which shows that the position is still in equilibrium, though the character of the game has been widely transformed! What William Cluley postulated in the 1850s still remains true! (Chess is a game of equilibrium)

White was alert to win a pawn using double attack. However, if he had chosen the right order of moves e.g. 25.Bxg7! Kxg7 26.Bxg6 Black's position is collapsing surprisingly quickly. However, this being a rapid game, one is not warranted to criticise a player's decisions with an eagle's eye.

This is the difference compared to the variation 25.Bxg7 - Black is not forced to recapture.

However, from a practical point of view, White has regained his lost material and Black's King lacks a proper pawn cover. When short of time, this usually tilts the balance in favour of the attacker, which happened after further interesting moments when Erigasi Arjun was able to crown his highly creative play with a well deserved victory. 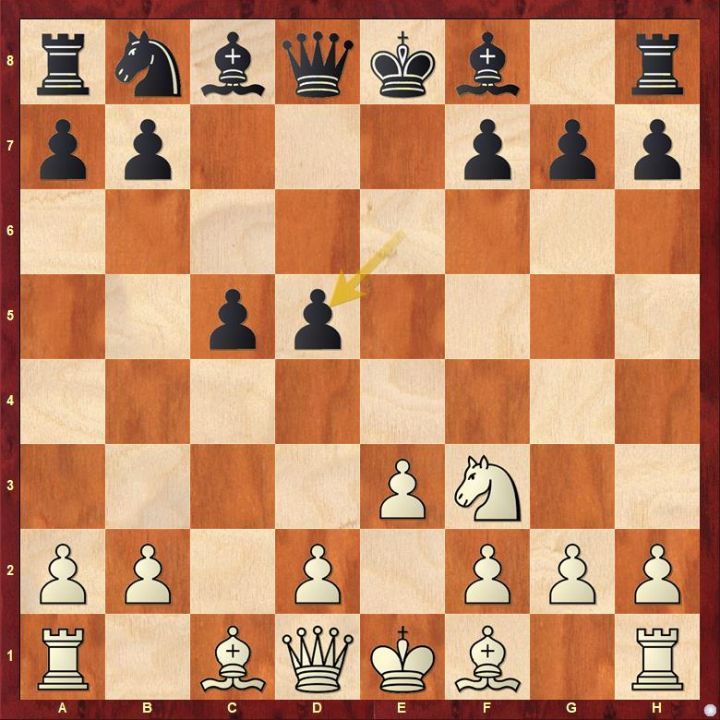 This is a position after Black's sixth move from the game Sargissian-Bok Benjamin European Team Championship 2017.

Here the Armenian Grandmaster continued with

with an idea in spirit similar to the game we have discussed earleir. White embarks on this flank pawn thrust/sacrifice in order to secure the complete control of the central d4-square. He also opens the c-file in the process and gains a few tempi for maximising his development.

It is important to note that White also stops Black's normal development as he has to waste a further move in protecting his g-pawn before moving his dark squared Bishop, which would in turn delay his castling. Such factors also come into account while observing the pawn sacrifice.

I have a feeling that Black's position does not warrant such a luxury as to make a pawn move on the queenside in order to stop Bb5. 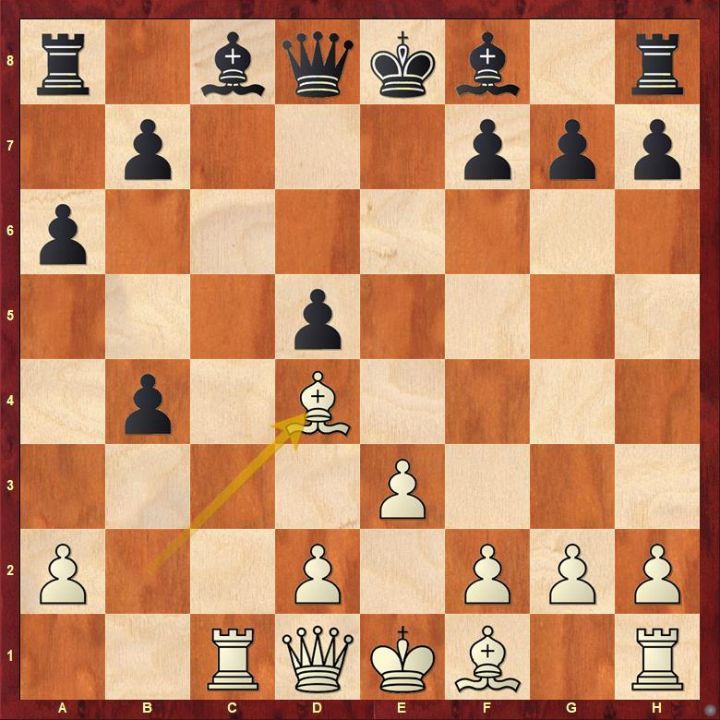 I love this position, the Bishop on d4 is super powerful. He also threatens to bring his other Bishop to a dominating diagonal with Bd3 on the next move.

White has made full use of the gambit. He has captured the c-file and entered the seventh Rank. Black's King remains dodgy on f7 and Black's pawns are falling one after the other soon. 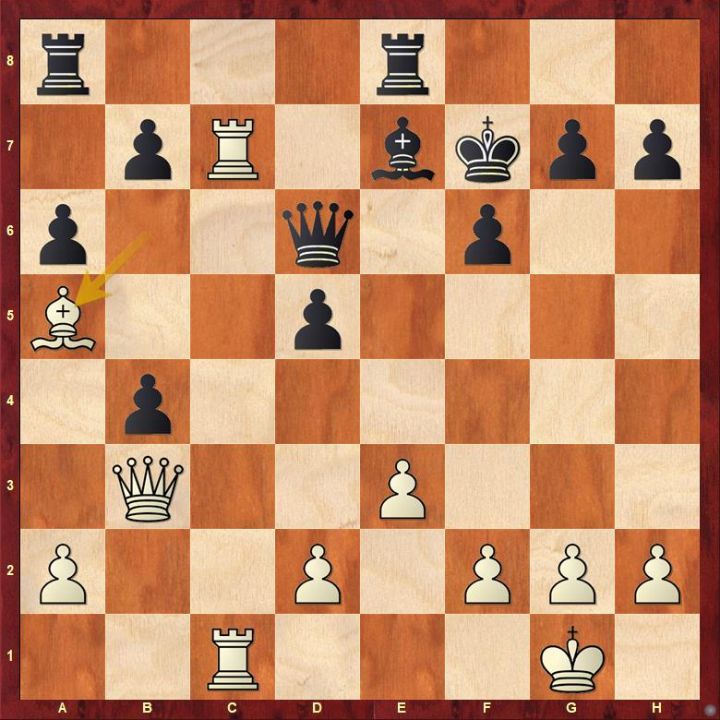 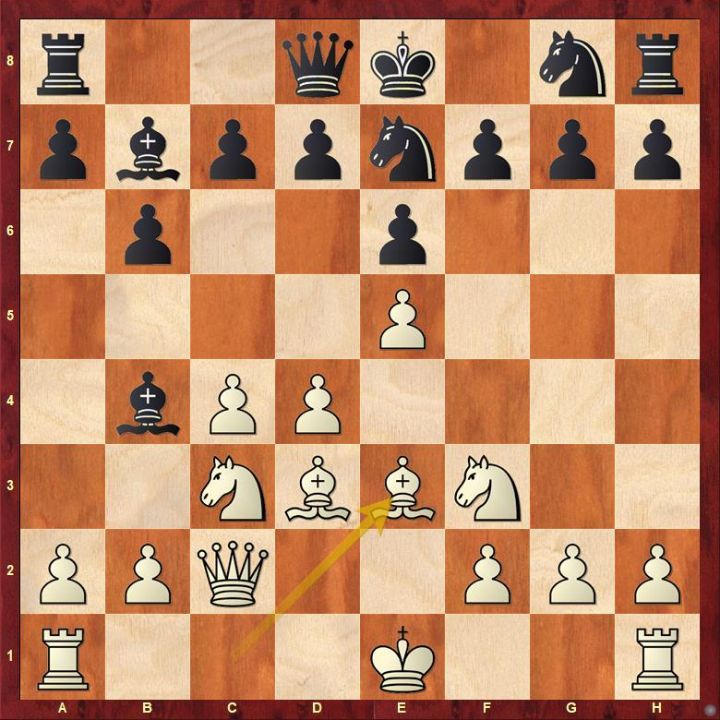 The next game we are going to deal with is one from the enigmatic genius Sultan Khan. How can I not include this example! In his game against Stahlberg from the Prague Olympiad in 1931, things have clearly gone wrong for the British Champion. He has wasted tempi in the opening, is on the verge of losing his Bishop pair to White's a3 and his Knights on e7 and g8 have trouble even breathing! Here he came with the spectacular wing gambit, which is the theme of our study. His excellent feel for squares and the statics of a position shine with clarity. Readers would ofcourse know of his excellent win against Capa in a Queens Indian with a2-a3 which was a deep move to indirectly control the centre. The system which is currently named after Petrosian was first used by Mir Sultan Khan to indirectly control e4 square by preventing Bb4.

He continued in the above position with

At the cost of one pawn, Black strives to stay in the game and not get run over immediately. He gains control of d5 square which is of paramount importance to complete his development. only if one the knights can come to d5 can the other go to e7 and the king can castle to safety. Without a doubt this is Black's best chance of a defence and one that looks aesthetic too! 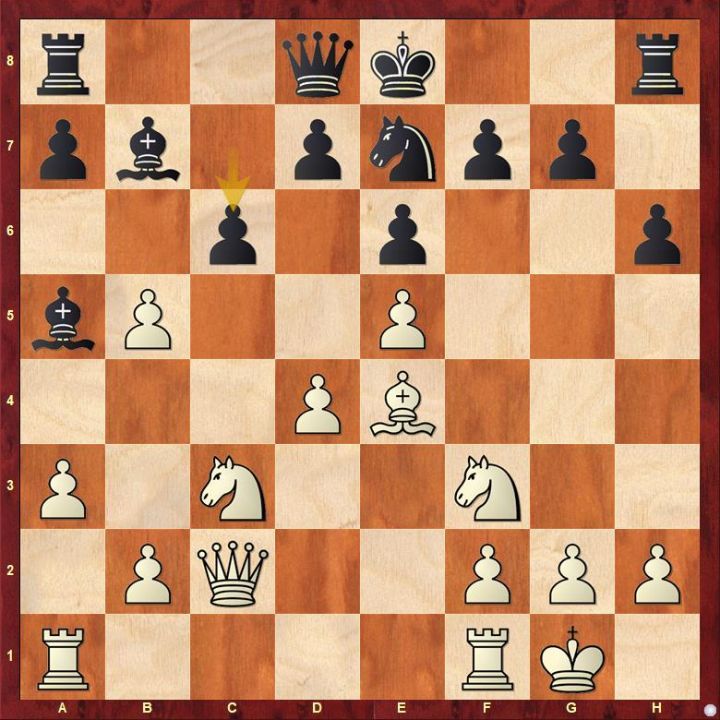 The audacity of the move is stunning! Black wants to preserve his light square Bishop, even at the cost of making his pawn structure more ugly. But he opens lines and creates more freedom to his pieces. White's advantage remains, but Black is changing the character of the game and making a fight out of what he has within his means.

Sultan still wants to preserve his light squared Bishop. He absolutely knew no prejudice with regard to so called 'correct play' as he was completely self taught like a future day Alpha Zero 😁 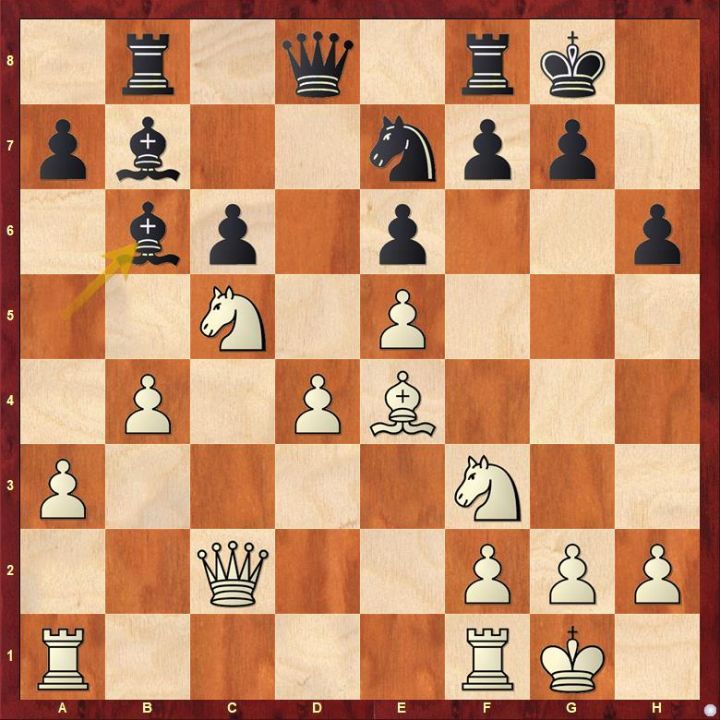 White's advantage still very much remains as both sides have not committed any sort of errors. But the nature of play has become different. Black fought and drew this game at the end! This is indeed creditable against such a formidable player as Gideon Stahlberg. White further won another pawn by playing

I wonder if Sultan himself would have traded quality for the prospect of winning a pawn. The fact that White's advantage remains just as before and only got transformed is an unshakable truth as is with energy in this universe! Nevertheless at a later point White committed errors at the face of stiff and original resistance from the master craftsman wielding the Black pieces. At the end Black drew the game being one pawn down in an opposite colored Bishop position. One can only wonder at the foresight of Sultan Khan at vehemently refusing to exchange his light squared Bishop for his opponent's counterpart. Of course its not correct to reason out an artists masterpiece, its just there to be enjoyed. The rest of the game is a wonderful example of the beauty of staying in the moment that Sultan did really well.

A few further games remain to be discussed on this fascinating theme of undermining the centre with a flank pawn thrust , but that is for another day in a continuation blog. The replayable link to the full game scores and some thoughts are given below.

ChessBase India is happy to see GM Sundararajan Kidambi writing his second post of the year in his blog "Musings on Chess". Knowing what an encyclopedic knowledge the grandmaster from Chennai possesses, I think we are in for a treat! One can only hope that Kidambi continues writing regularly! We will keep reminding him about it!