Kidambi travels back in time

Due to the global pandemic situation, FIDE Candidates was the last over-the-board tournament that was taking place in last month, which got stopped halfway through its completion. Naturally there was a dearth in following chess games across the world. The only way to follow recent games was online games and the other option was to take a look back at the classics. Chess connoisseur GM Sundararajan Kidambi decided to take a deeper look at a game from Zurich 1953 Candidates annotated by none other than David Bronstein. What inspired Kidambi to travel back in time? How long did he take to analyze the games? Kidambi analyzed the game in old notations in his blog, we changed it to algebraic notations for everyone's easy understanding. Photo: zurich-cc.com and Shahid Ahmed

There are so many reminiscences of the past in various spheres of  activity. I found it particularly funny when cricket scores were updated in espncricinfo with a retro live theme! And with the dearth of inflow of activity television channels too have decided to resort to re telecasting old programs. In many ways as Chess players and enthusiasts are very fortunate because it is much more feasible and pretty to revisit olden games. The FIDE candidates tournament too had to be stopped due to the current situation, and continuing with the current trend, I thought why not pretend to commentate on a Retro Candidates event? And What better event than the famous Zurich 1953 with the inimitable comments of David Bronstein! Let's delve into the second round duel between Efim Geller and former World Champion Max Euwe. To maintain the purity of time travel I will give below the comments of Bronstein in descriptive notation! For those who are not used to this can check the re playable board given at the end for the currently used Algebraic notation. I have also included some of my observations in italics.

One of the best games in the tournament, and the winner of a beauty prize. White starts a strong Kingside attack by sacrificing his QBP. Geller has every chance of succeeding if Black according to tradition, counterattacks on the Queenside. Euwe however, carries out two remarkable ideas:

1) He makes good use of communication with the Queenside to attack the Kingside, and

2) He lures his opponent's forces deep into his own territory in order to isolate them from the defense of their Kings. It is extremely interesting to see how White's pieces dig deeper and deeper into their frontal attack on the King while Black regroups circuitously. A small but important detail in the opening: as a result of Black's substitution of b6 and Bb7 for the usual Nc3 and 0-0, White, who failed to react correctly in time with Ne2, has to spend an extra tempo to prepare e4. Such details must never be overlooked, but they should not be overemphasized either. It is sometimes said that White's advantage consists of the first move; if he loses a tempo the advantage should go to Black. In practice, however, White's advantage is that has a greater choice of possible plans to suit his taste; when play is in full swing the loss of a single tempo is not always of great importance.

Black moves the Knight to avoid the pin Bg5 and to answer f4 with ...f5, blocking the Kingside. White therefore takes control of f5 before moving his f-pawn. Defending the c4-pawn is pointless: it was already doomed by White's fifth move. 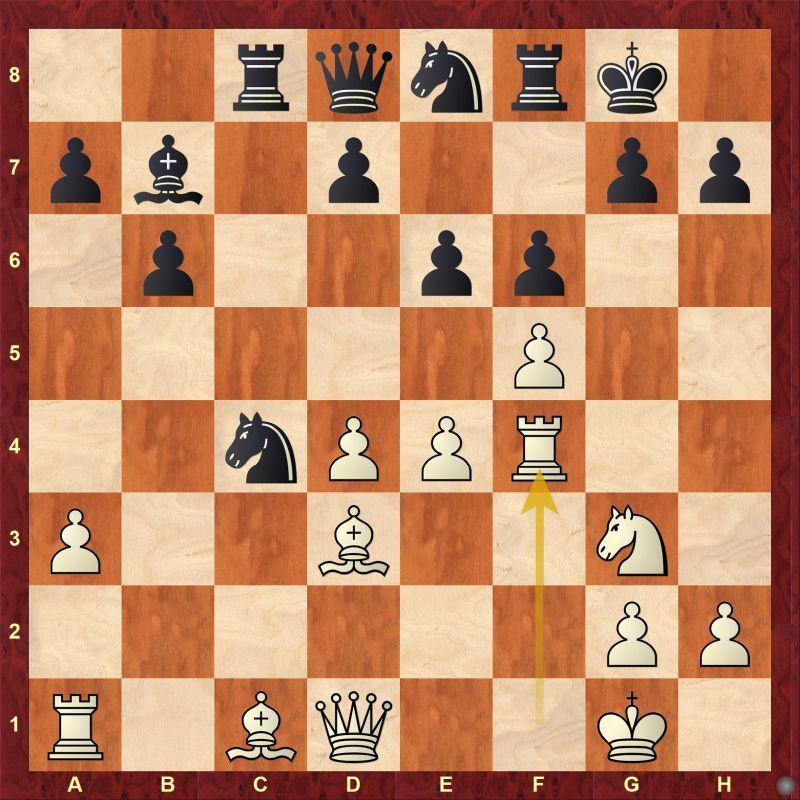 White's attack becomes threatening. Black's last move was necessary because White intended to advance his pawn to f6 and to answer ...Nxf6 by pinning the Knight and attacking the King with the combined force of Queen, Rook and three minor pieces. Now White needs only two moves to transfer his Queen and Rook to the h-file, after which nothing it seems, will save the Black King.

But Euwe is not easily upset, Remember that in his life he played more than seventy games against Alekhine, the most dangerous attacking player of his time.

The beginning of a remarkable plan. It is clear that any defensive maneuver on the kingside that depends on pieces without significant scope - Rf7, Qe7, etc.- is doomed to fail. But Black has another defensive resource - counterattack! The bishop at b7, the rook at c8 and the Knight on c4 occupy good launching positions and all that remains is to activate the Queen. The basis for counterattack is Black's preponderance on the central squares. With 16...b5 Black reinforces his Knight's position and opens the way for the Queen to b6. Nevertheless, the impression is that these operations will be too late.

With this in mind and the benefit of hindsight, it seems to me that perhaps white could have considered 16.a4. And wouldn't Sultan Khan, Petrosian or a later day Karpov have played that move as White!?

Pinning the White Queen to the defense of the d-pawn, Black impedes White's plan to play Qh5. Incidentally if 17.Qh5 Qb6 18. Ne2 Ne4 an echo variation arises; White has no time for Rh4

Each of White's moves requires careful and accurate calculation. Here, for instance the natural 20.exd7 would not have worked because of 20...Qc6.

20.... dxe6 was an option for Black which seems to improve the structure. However, that is not the priority for Black, his Queen is a key participant in the Whirlwind counter attack that Black unleashes later on in the game, And for that, clearly she needs activity! 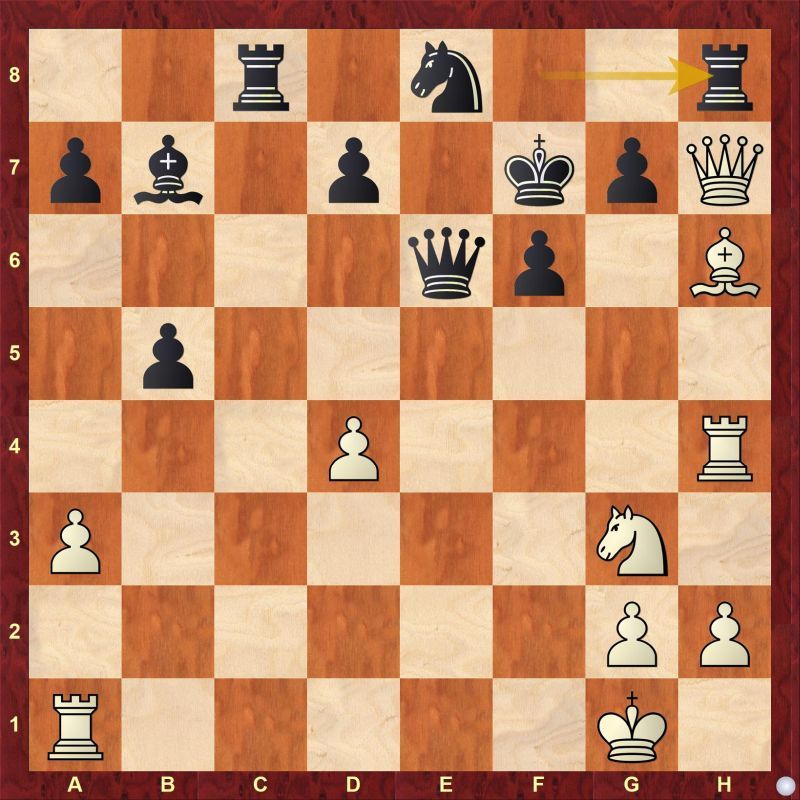 Black's 16th move b5 was the beginning of a strategic plan of counter attack, and the Rook sacrifice is its main tactical blow, aiming to divert White's Queen far from its Qc2 and to use that time to attack the King.

The Imagination and the concept of the idea is truly brilliant. As Bronstein has already pointed out, Euwe has a unique experience of playing a lot of games versus Alekhine, and can it not do wonders to one's whole board vision? There were of course various other alternatives in this rich position. For Example

4) 22....Rc3!? is another idea which threatens Qd5 and if need be undermine White's control of e4 with a possible Rxg3 in mind. 23.Rf1 Qd5 24.Ne4 Ke7!! and amidst all the Chaos Black might quietly let his monarch run away to safety from the centre of action. And this might tilt the balance in his favour.

Analysts have also demonstrated that the overall idea of ...Rh8 was premature. Rc4 was better first. Nevertheless, it will be hard for chess lovers to agree. A move like 22....Rh8 is not easily forgotten.

Bronstein's comments to this impressive game were no less of a masterpiece than the game itself.

The two most important moments in the game were 16...b5 and 22...Rh8, both required great imagination and flight of courage, which were both abundantly available to the Chess Artist Max Euwe.

To a certain extent I am also reminded of the 24th Round game between Keres and the eventual winner Smyslov from the same tournament. White would use all his might to attack the h-pawn in order to deliver a mate, but finally it amounted to one solitary pawn and better central control of the opponent diffused the attack surprisingly easily.

The position after White's 22nd move is very rich and would definitely enthrall the imagination of many a reader. The variations indicated are only a spark to delve into the position further.

Signing off with respect to Bronstein, Geller and Euwe!

ChessBase India is happy to see GM Sundararajan Kidambi making his second post of the year in his blog "Musings on Chess". Knowing what an encyclopedic knowledge the grandmaster from Chennai possesses, I think we are in for a treat! One can only hope that Kidambi continues writing regularly! We will keep reminding him about it!