Capablanca said, "In order to improve your game, you must study the endgame before everything else. For whereas the endings can be studied and mastered by themselves, the middle game and end game must be studied in relation to the end game". Many world champions and countless masters of the game emphasized on the importance of the endgame. Kidambi discusses a Rook vs Rook-Bishop endgame from the recently concluded Chessable Masters. The position was shown to him by his friend R Karthik, Kidambi also draws reference from Matthew Sadler's blog and a position Sandipan Chanda composed and shared with him last year. Check out Kidambi's elaborate explanation and his thought process. Photo: Shahid Ahmed

The vastness of the endgame

"Chess is an infinitely complex game, which one can play in infinitely numerous and varied ways" - Vladmir Kramnik

Unlike other games, there is no dearth of action in Chess. And this is a very good thing for chess lovers all over the world. My friend R Karthik brought to my attention a particular position from the game Radjabov-Caruana, Chessable Masters. It had the material distribution Rook and Bishop against a lone rook, to which Caruana is no stranger! One can recall his key games against Svidler from Candidates 2016, and Duda in the 2018 Olympiad where he could not figure out the win over the board. But things have started turning around for him as was shown by his game against Gareyev in the US Championship 2019 and in the following position against Radjabov which he won despite there being a draw with 'right' play for his opponent. Of course, to me this only shows that it is quite a tall order for any one, even the very best to keep the concentration going at all times, and also recalling the ideas to win or draw at the right moment with a ticking clock! This is being shown time and again in the games of many strong Grandmasters, that the endgame though seemingly simple has still lot of drama and beauty to offer us. 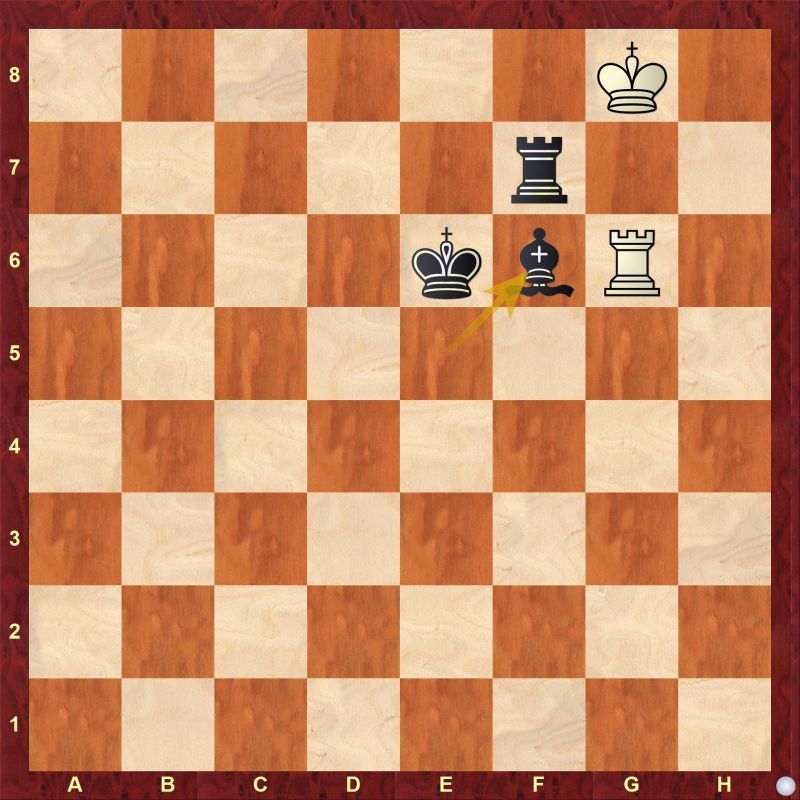 This is the position after Black's 108th move Bf6. White has an unenviable task of trying to escape out of the woods unscathed. I will share my thought process in the above position as an observer trying to figure out if there is indeed an escape route. And let us assume that we all know the Philidor position well and would of course steer away from it, in order to save this position.

The next and the more tempting idea was 109. Rg4 intending to meet 109...Rc7 with 110.Re4+ Be5 111.Rg4!? The idea behind this manoeuvre is to keep the Rook within the supporting distance of White's King, if Black tries to win the Rook as in the Philidor position with a check on c8, then another on h8 and g8. However let us see continue with the variation 111...Rc8+ 112. Kh7 and now the 112...Kf5! and even though this seems to be a win, I had seen a similar stalemate idea earlier while analyzing positions with such a material balance, which also works here. 113.Rg5!+ saves the day for White. 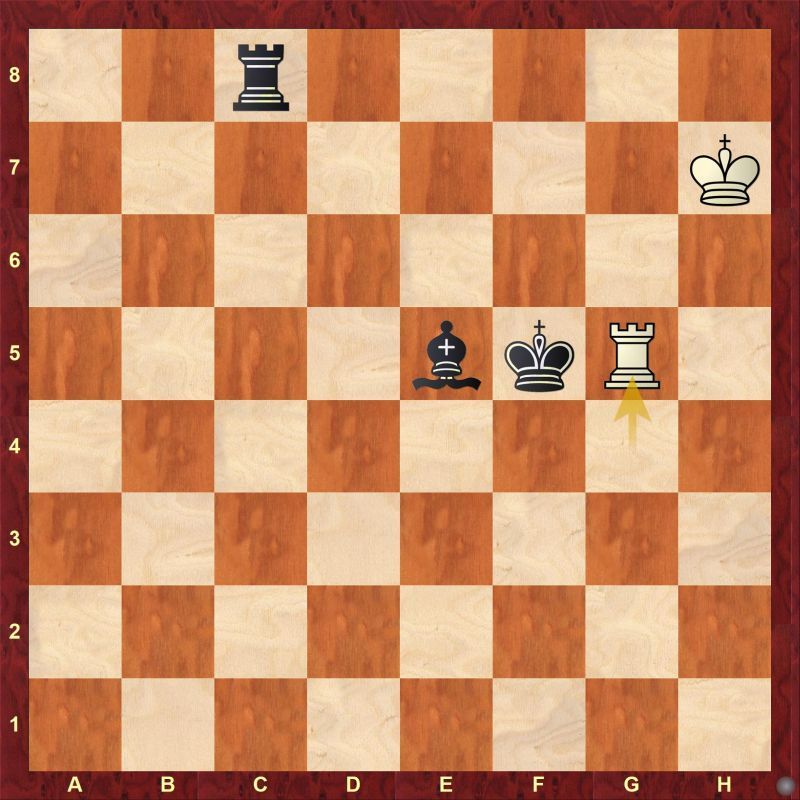 However, finding such pretty ideas can give one a wrong sense of confidence in the feasibility of an idea! One tends to wish that these pretty ideas can lead to the desired result and stop us from noticing keenly the other features in the position. A deeper look showed that Black was by no means forced to play 111...Rc8+? but instead switch back and come for checkmating the White's King from a completely different side with the calm 111...Rc1!! This surely deserves another diagram. 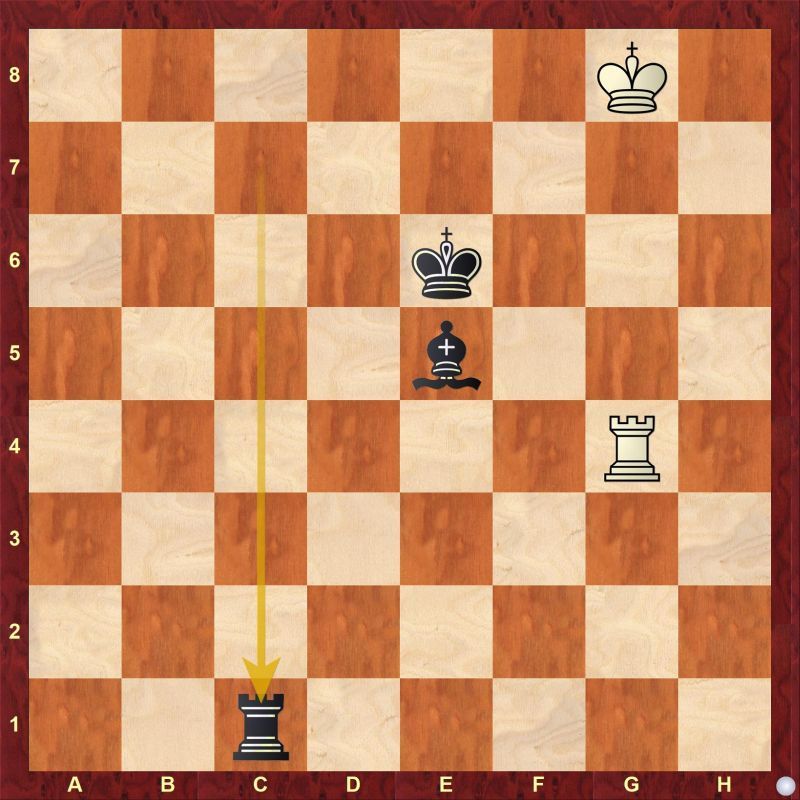 White seems completely powerless to stop the impending calamity, for example 112.Kh7 Kf5 113.Rg2 Rh1+ and now after 114.Kg8 another pendulam manoeuvre wins the game 114...Ke6! -+ By switching back and forth with the king and also changing the direction of attack with the Rook, Black has cleverly managed to step away from the stalemate trick mentioned earlier - Fascinating!

So, after the not so obvious refutation I was back to square one on how to fight for a draw in the initial position. The next idea that popped up was after recognizing that this position was analysed as a variation of Lolli's position with the King's on the Knight file (White's King on g8 and Rook on f1- Black's King on g6, Bishop on g5 and Rook on lets say a7). The key defensive idea in this position is to check the Black's King from the 6th Rank. I came to know of this after studying this position based on the work of Grandmaster Matthew Sadler in his blog. 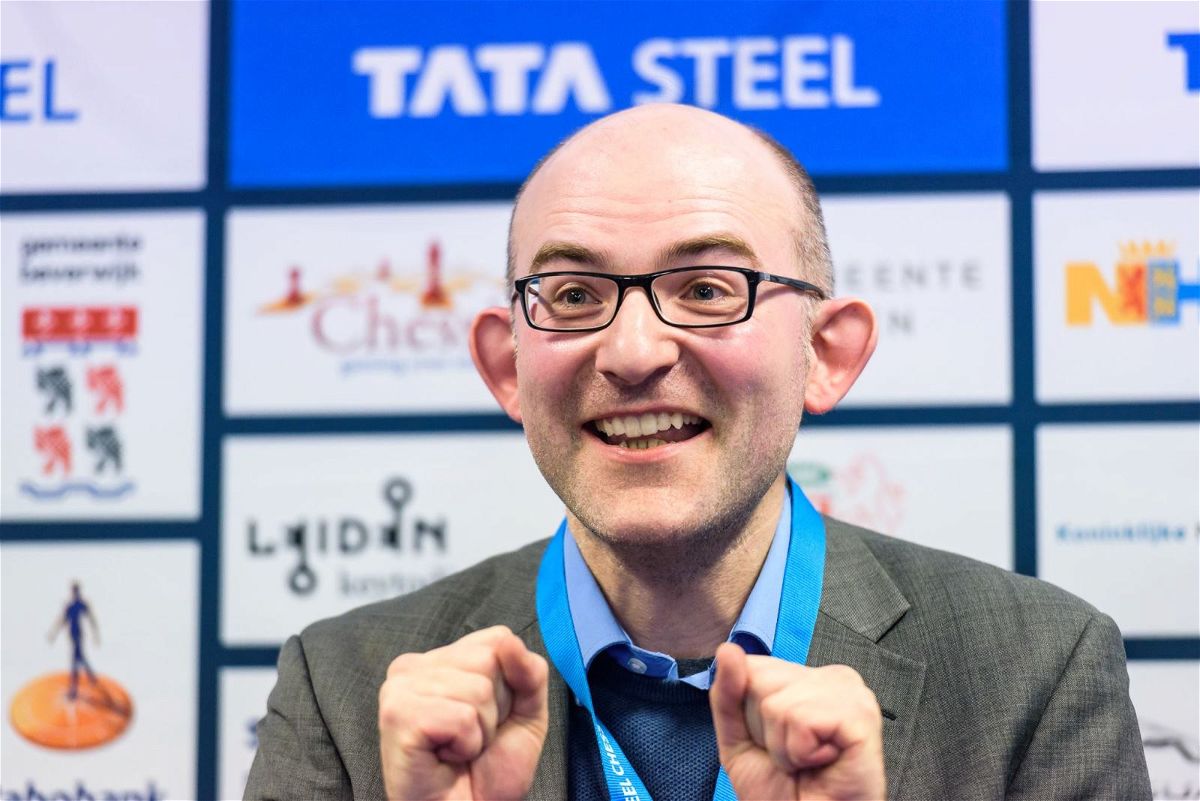 Last year, when I spent sometime studying these positions, I came to an approximate conclusion that even if White plans to reach the 6th Rank, he needs to do so from a place where he has maximum safety. In this position White's target square for the Rook is a6 or c6. It is very important that the target square should be on the opposite coloured square of the opponent's Bishop which would then not be able to take it away from our rook. And in order to reach the target square, the path should also be on a light square for the same reason, and this led to the idea which saves White in the original position.

Let us come back into the game, Radjabov continued with 109.Rg3? and the problem with this approach, though not obvious is possible to glean from the idea mentioned earlier about Black's Bishop taking squares away from Opponent's Rook.  Caruana continued with 109...Ra7!  and in turn Radjabov replied with the not so testing continuation 110.Re3+? which was answered by 110....Be5! wherein Black reached the Philidor position and duly won the game in a few more moves.

The question is what would have happened if White had played 110. Rb3 instead intending to give checks to the black king from the 6th Rank. In reply Black would have actually taken away the key b6 square from White's Rook with 110...Bd4!! after which he would have been powerless to save the game as seen after 111.Rb4 Rg7+ 112. Kf8 Rg4 and Black again wins in a manner known to us from the Philidor's position.

Can White try and play 109.Rg1 instead and try the same plan to reach the 6th rank and hold the position. This did not intuitively seem right, but let us look at the variations anyway. If Black continues with 109...Ra7 then white gets the chance to play 110.Rc1 and next up will reach the target square c6 and hold the position. However, in reply to 109.Rg1 Black has the accurate 109....Rc7! (taking away the c6-square from the rook) 110.Rb1 Bd4!! taking away the b6 square from the rook. And now White is lost because he has no time to reach the 6th rank as a1 square is controlled by the dark squared Bishop and eventually White has to allow Black to reach a Philidor's win after 111.Re1+ Be5!

This endgame showed a lot of intriguing ideas, primarily revolving around square control/domination and also various Stalemate and Checkmating patterns. Last year I had analysed various situations in Rook and Bishop versus Rook endgames and had a very meaningful exchange of ideas with my friend Grandmaster Sandipan Chanda, who is perhaps India's most original and erudite when it comes to the last part of the game. While he too was working on similar positions, he sent me one of his pretty compositions in this endgame. 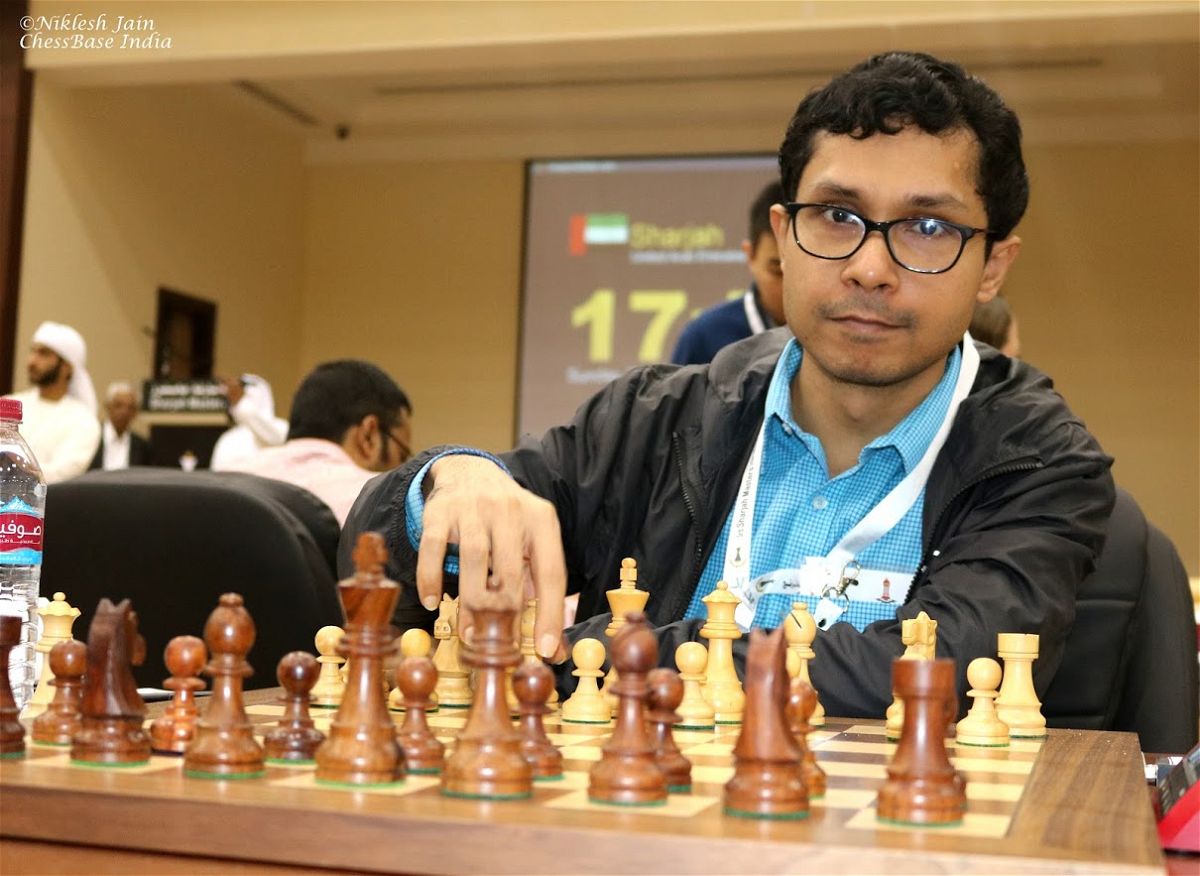 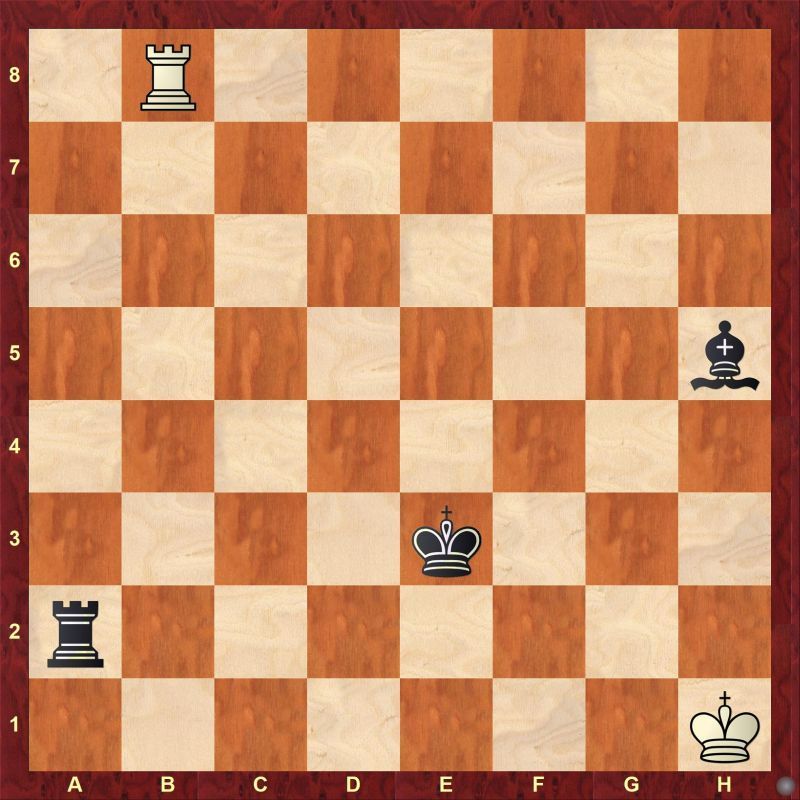 It is Black to move here and to the outward eye, Black's pieces appear scattered and do not seem to be creating any immediate threats. However, so very swiftly Black combines his pieces and at the same time dominates White's Rook from coming to the aid of his King's defence by checking the opponent's King. Readers can think about this position and find their own way before reading the solution given below.

I would like to thank Philidor (for being the pioneer in analysing Rook Bishop versus Rook positions) without whom we cannot proceed anywhere in Chess, Lolli (a famous Italian theoretician from the 18th century who also enriched our knowledge of such positions), Matthew Sadler for his wonderful blog, Sandipan Chanda for his original contribution and Karthik for sharing this wonderful position with me.

Kidambi's friend Karthik Rangarajan who shared the position with him | Photo: Karthik's fb

1. Lasker's Manual of Chess (on the Philidor position)

Of course, one should try and appreciate the beauty in such endgames by playing through and questioning various ideas in a variety of positions. This endgame once again, despite a previous study on the subject revealed to both Sandipan and I, that there are always new and varied viewpoints even in seemingly simple positions and  many more beautiful creations lying calmly waiting for their discoverers!

ChessBase India is happy to see GM Sundararajan Kidambi making his fifth post of the year in his blog "Musings on Chess". Knowing what an encyclopedic knowledge the grandmaster from Chennai possesses, I think we are in for a treat! One can only hope that Kidambi continues writing regularly! We will keep reminding him about it!