Vidit Gujrathi and Pentala Harikrishna will start their road to Candidates 2022 today at the Berlin GP. Vidit is in Pool C along with Aronian, Dubov and Keymer. Harikrishna will compete in Pool D with So, Leinier and Shirov. The Pool stage will be a double Round-Robin event of six games. The winner of each pool will advance to the Semi-finals which will also be a battle of two Classical games. World no.3 Ding Liren and FIDE World Cup 2013 runner-up Dmitry Andreikin will miss this event. The chances of Ding Liren qualifying to the Candidates 2022 seems to be almost slim to none. Round 1 of Pool stage starts today at 7:30 p.m. IST. Photo: FIDE

The first leg of FIDE Berlin Grand Prix starts today. FIDE named two replacements for World no.3 Ding Liren and Dmitry Andreikin due to 'visa and health issues'. The replacements are Andrey Esipenko and Radoslaw Wojtaszek. The FIDE President, upon consultation with the organizers and arbiters team, made a decision on the replacements as per the event’s regulations. 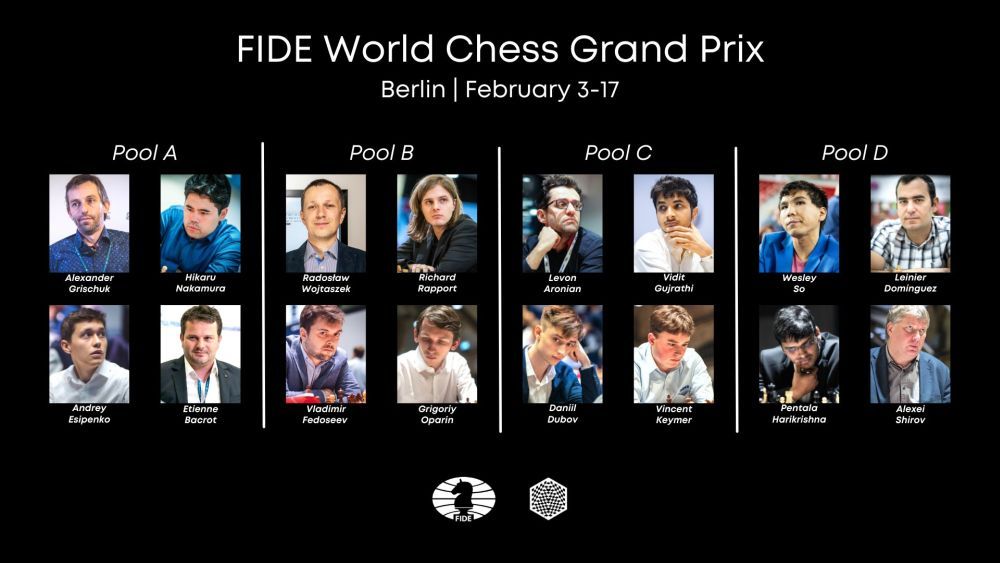 Here are the 24-players list according to each GP event 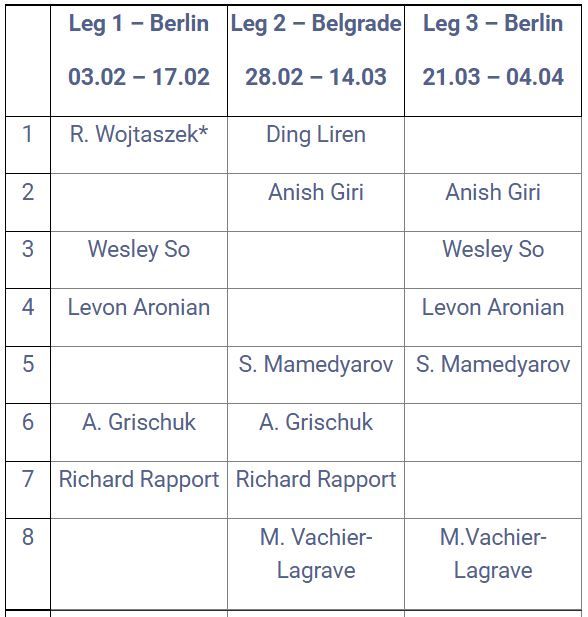 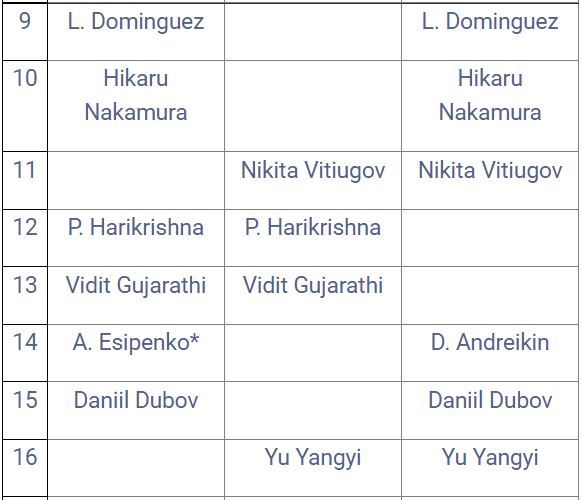 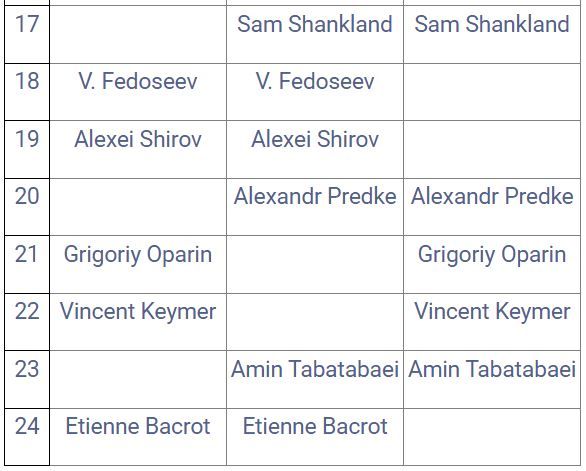 FIDE Grand Prix, organized by World Chess, is a 3-event series that features 24 players, each of whom will compete in two out of three tournaments. Two winners of the Grand Prix Series will qualify for the Candidates Tournament. The series will take place in Berlin, Germany, and Belgrade, Serbia. 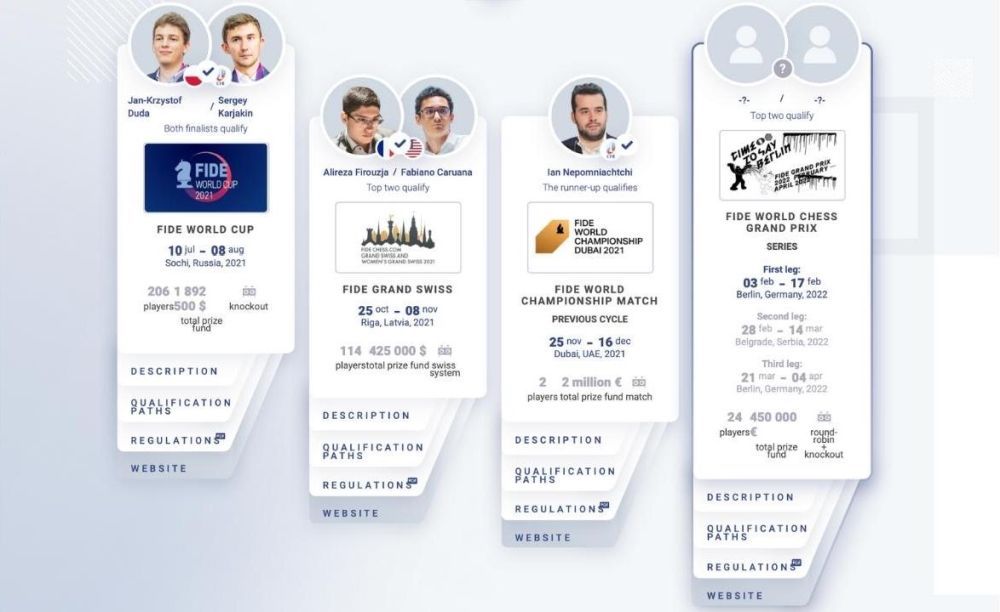 Each 16-player event will consist of a group stage followed by a knockout semi-final and final. At the group stage, the participants will compete in four double-round-robin tournaments, with only the winners of each pool advancing. Both semi-finals and the final will consist of 2 regular time limit games, plus tiebreaks if needed.

Players receive Grand Prix points according to their finishing position in each tournament: 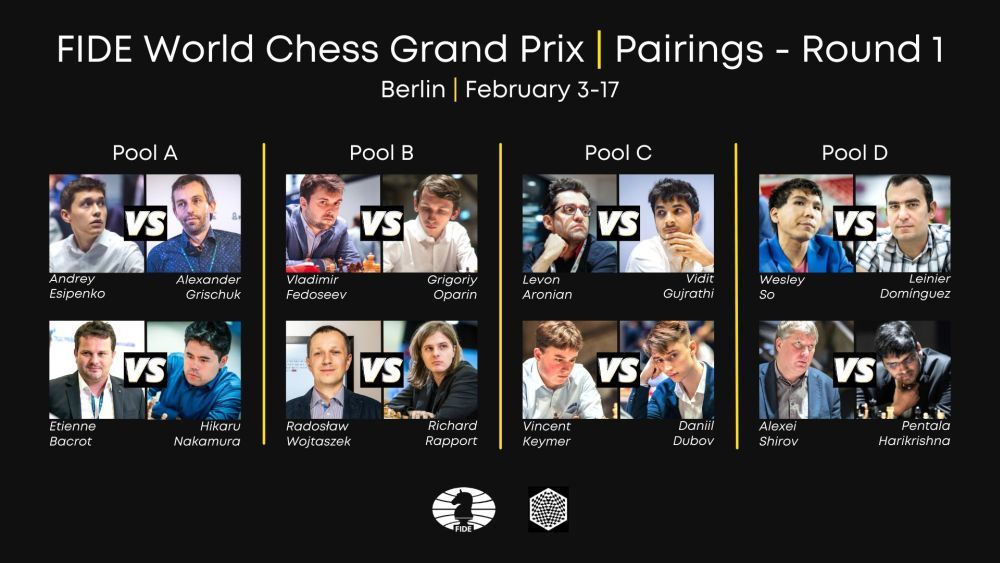 Peter Heine Nielsen - the most successful chess trainer in the world and also the coach of the world champion, Magnus Carlsen suggested a possible solution of Ding Liren missing out on another chance to qualify for the Candidates.

Ding Liren held 100-game unbeaten streak which was ended by Maxime Vachier-Lagrave back in November 2018 in Shenzhen, China. He has proven to be a tough opponent for Carlsen in all formats of the game.

All you have to do is guess the number of points that Vidit and Harikrishna will score accurately, and two winners will get the prize! The prizes are - Chess Course by Praful Zaveri and Vedika's chocolates Valentine's day pack.