CM Alex Averbukh of Japan, scored 5.0/5 to win Tachikawa Chess Open 2020. He finished a full point ahead of the competition. Four players finished at 4.0/5. Koji Noguchi and top seed Atsuhiko Kobayashi secured second and third place respectively according to their tie-break score. The tournament was organized by Tachikawa Chess Club at two different venues in Tokyo, Japan on 8th and 9th February 2020. First day two rounds were played at Hamamatsucho and on second day the final three rounds were played in Tachikawa. Photos and Tournament report by one of the participants, Seiji Nakagawa.

Alex Averbukh triumphs with a 100% score

CM Alex Averbukh of Japan won Tachikawa Chess Open 2020 with a 100% score 5.0/5. He finished a full point ahead of the field. Four players finished at 4.0/5. Koji Naguchi and Atsuhiko Kobayashi secured second and third place respectively according to their tie-break score. 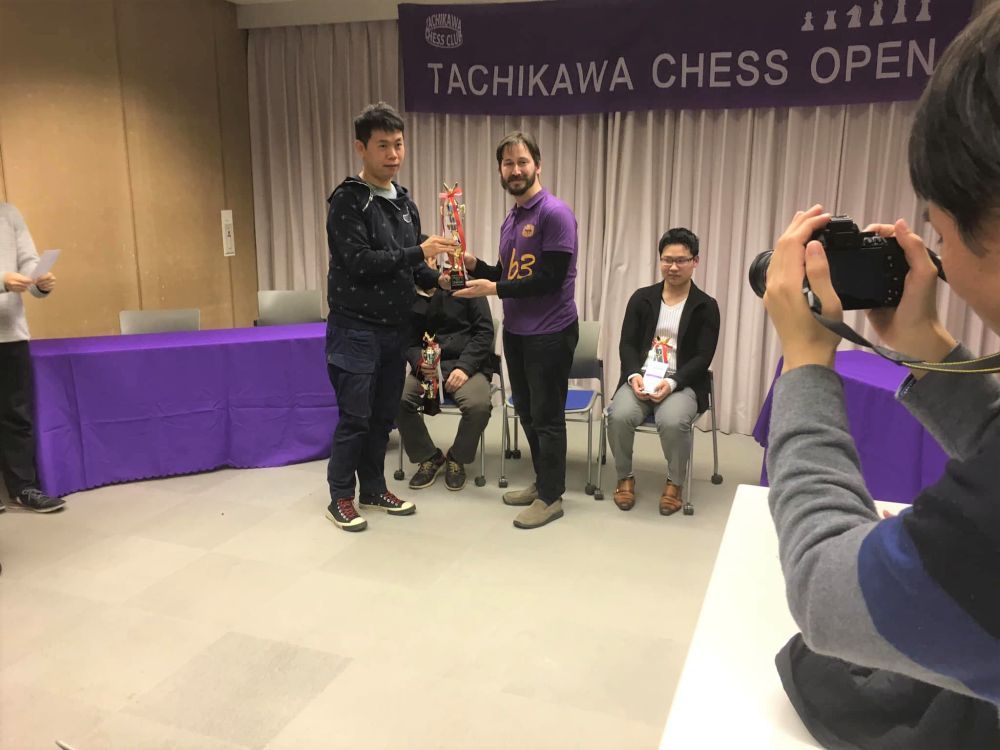 2019 February saw a change of the official Japanese representative to FIDE, from JCA (Japan Chess Association) to NCS (National Chess Society of Japan). Some of the objectives of the new NCS is to run more FIDE-rated tournaments in Japan, as well as to help local organizers hold casual open tournaments. One such tournament was the Tachikawa Chess Open 2020 where the organizing entity was not NCS, but Qinlan (Shinran) Xie and the Tachikawa Chess Club who were backed up by executive members of NCS. 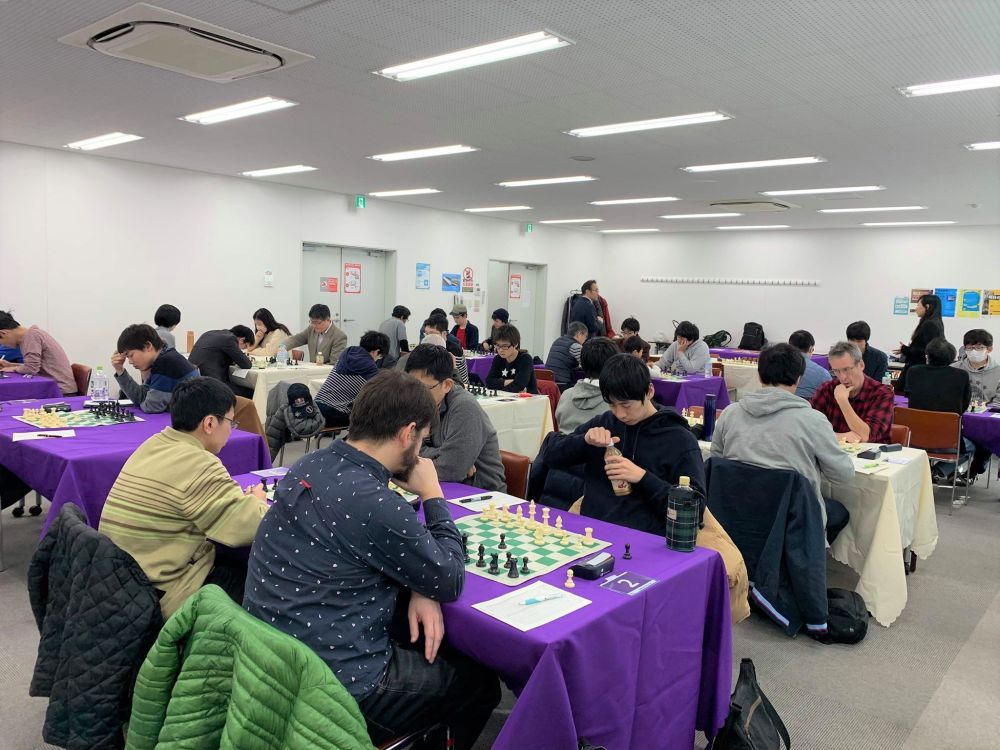 Tachikawa Chess Open was an Open tournament for players rated under 2200. This was strictly because the time controls were 60 minutes + 30 seconds increment. FIDE does not rate games where one (or both) player is over 2200 if the time controls were less than 90 minutes + 30 seconds. There were five rounds, two played on the first day and three played on the second day. One interesting aspect was the change of playing venue. Day one was played in Hamamatsucho which is the heart of Japanese foreign trade, located close to the Takeshiba pier. Day two was played in Tachikawa, the organizer’s home base in West Tokyo. 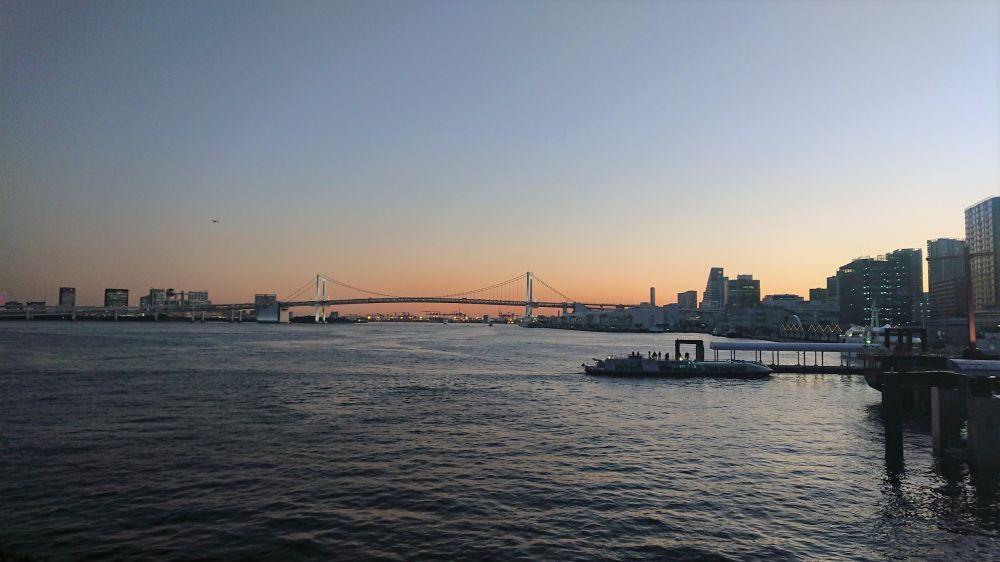 The tournament initially had over 50 players registered, thanks to Qinlan’s connections with chess players from China. Unfortunately due to the outbreak of Coronavirus there were many last minute cancellations but despite the setback, the tournament gathered 36 participants. On top of the list are the trinity of 2100s, followed by a former Japanese Champion (2018), Koji Noguchi. The top seed Atsuhiko Kobayashi has recently been selected for the 2020 Olympiad team for Japan. Second seed CM Alex Averbukh is a pioneer in english chess education in Japan, teaching at many institutions across the Tokyo area. Yours truly was a student of his, albeit 13 years ago. 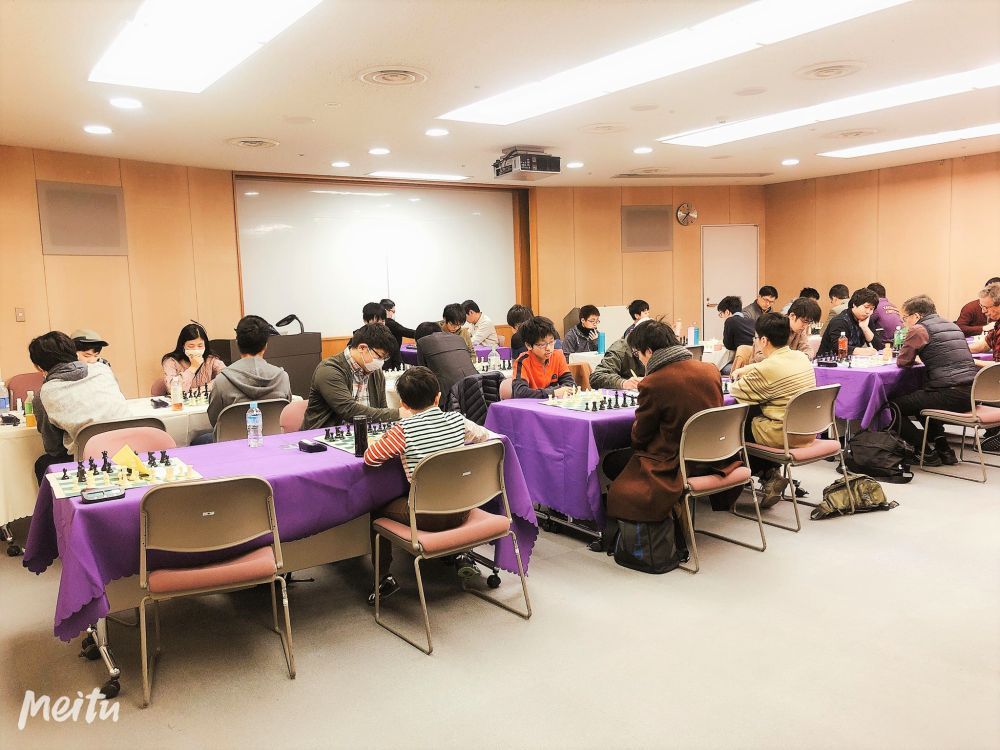 After two rounds (end of day 1), the favourites unsurprisingly won their games and round 3 saw interesting pairings on the top boards: 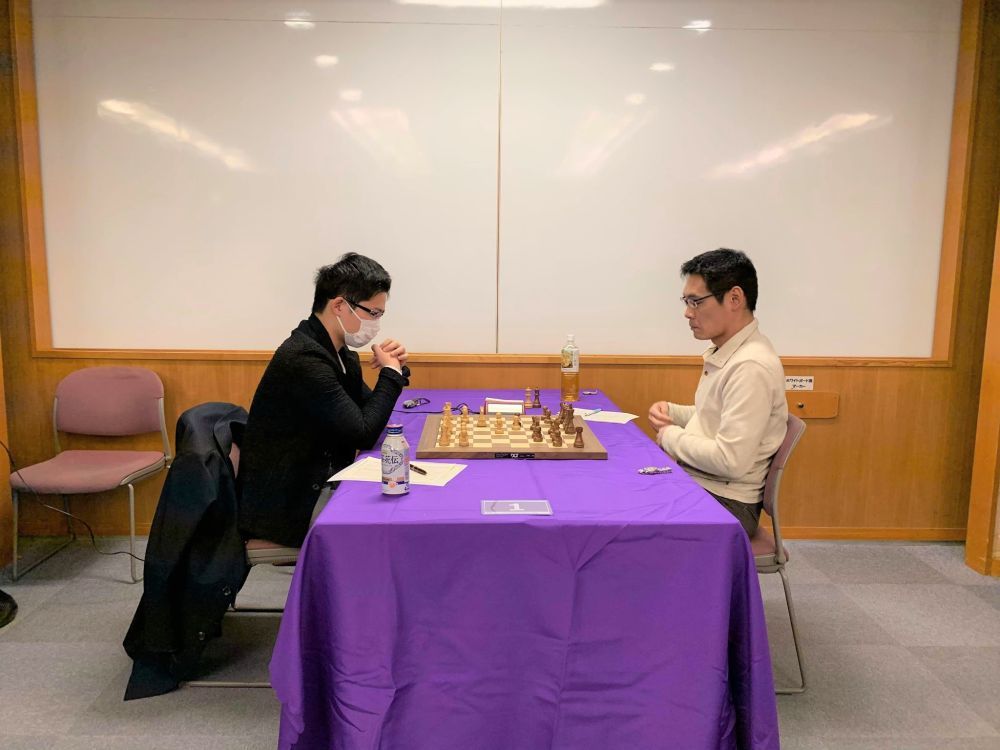 Kobayashi - Noguchi played over a DGT board | Photo: Seiji Nakagawa

Noguchi amazingly won his game against Kobayashi. Mitsui - Averbukh game went overtime, but in the end CM Averbukh pulled through. Round 4 pairings were done in advance:

Noguchi kept winning, but CM Averbukh kept the pace so obviously the finals were between the two of them in Round 5:

CM Averbukh won the game and the tournament overall. Noguchi, who got second place deserves credit for having played three 2100s on the same day and winning against two of them! 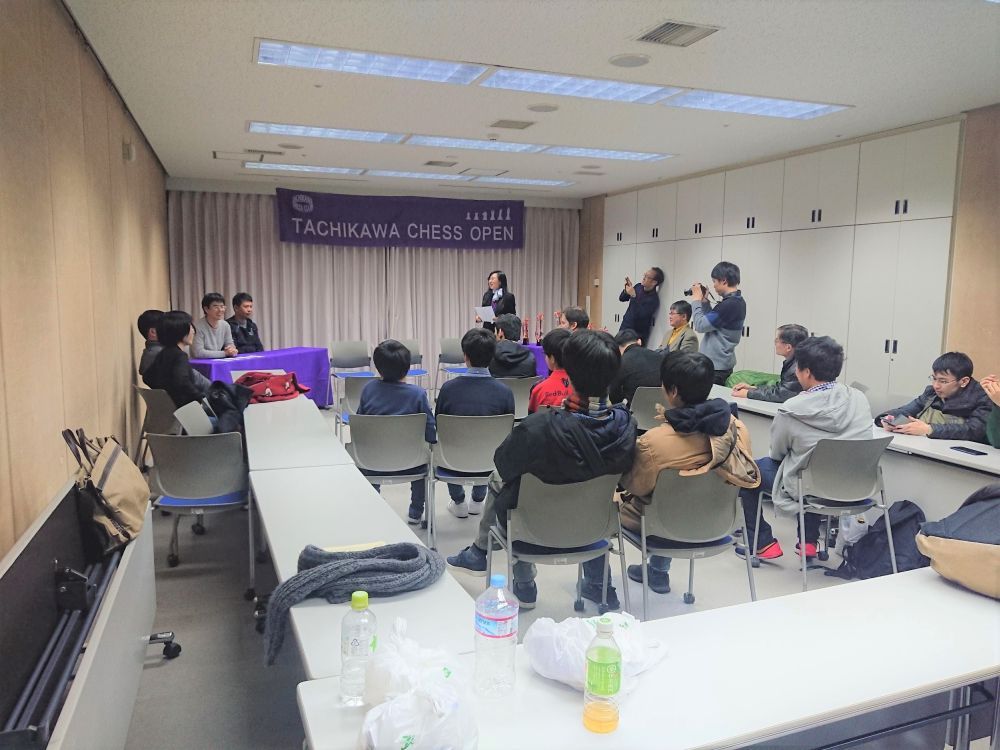 The Award Ceremony welcomed special guests, FM Masahiro Baba and more importantly World Championship Candidate Wang Hao! Trophies and Prizes were given to the top players, as well as top juniors, top senior and top women. Of course, those trophies were handed to by GM Wang Hao!

Here are a couple of games of Seiji Nakagawa himself against Mitsui Ryoya and Atsuhiko Kobayashi from Round 4 and 5 respectively. 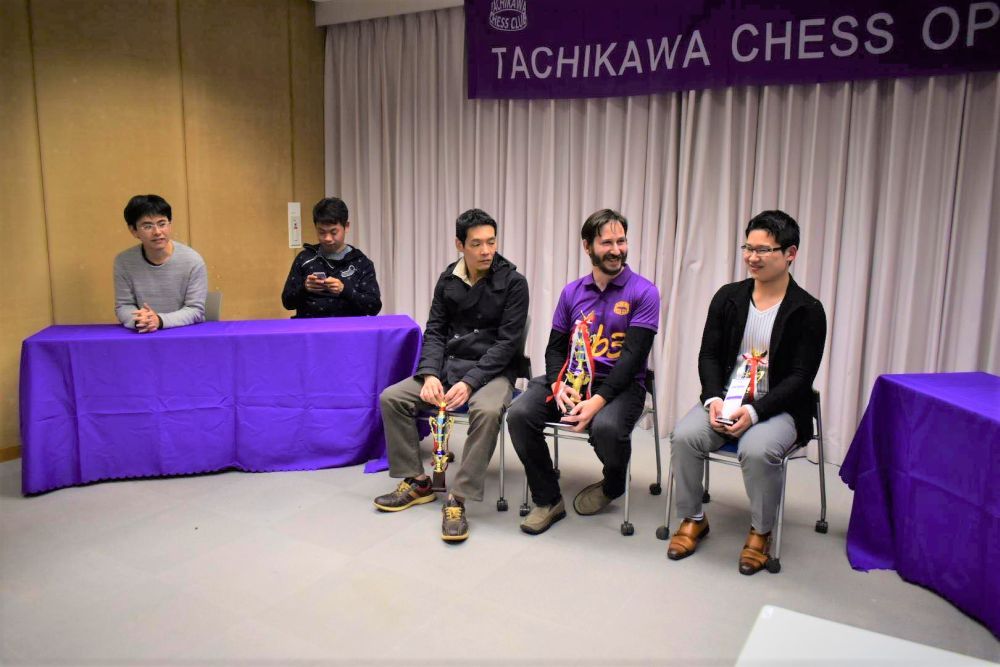 The tournament winners with their Trophies, FM Baba and GM Wang Hao to the left | Photo: Seiji Nakagawa 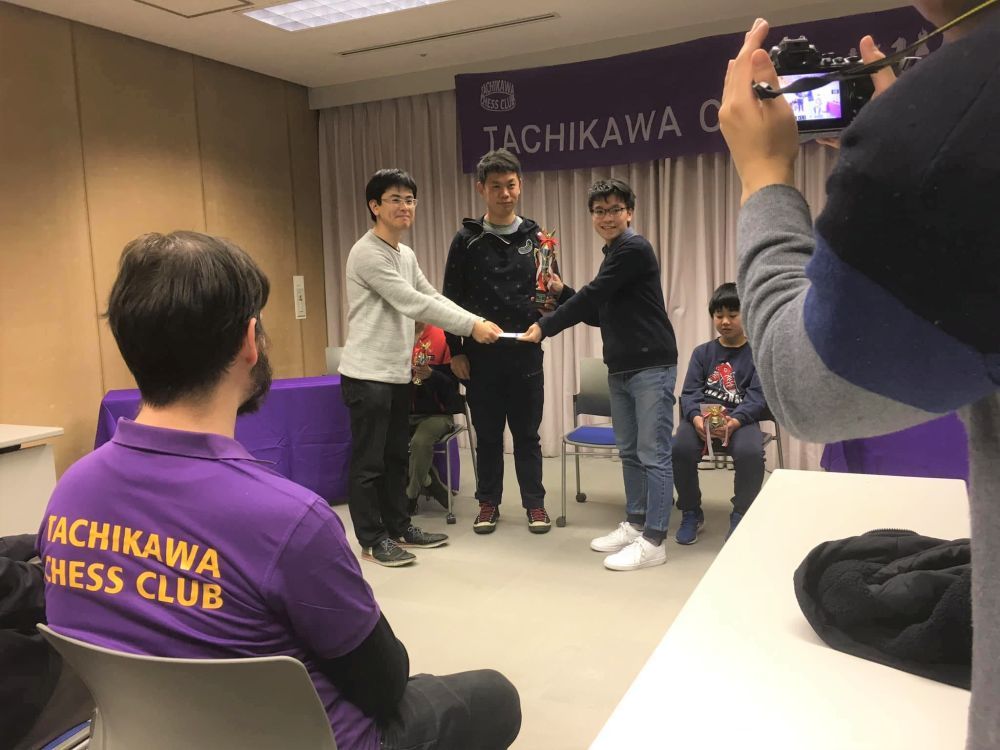 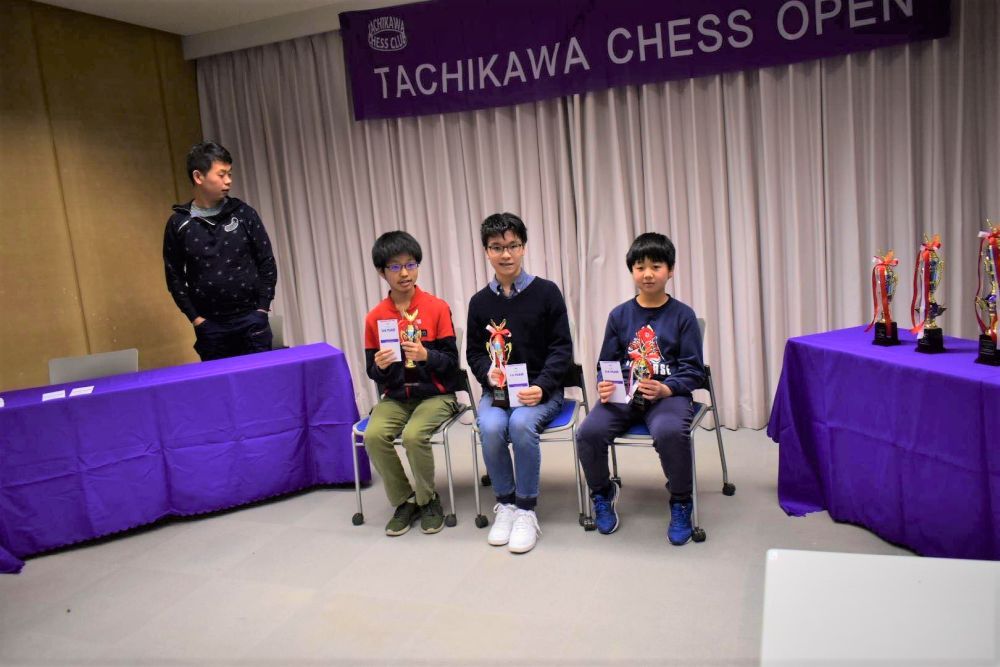 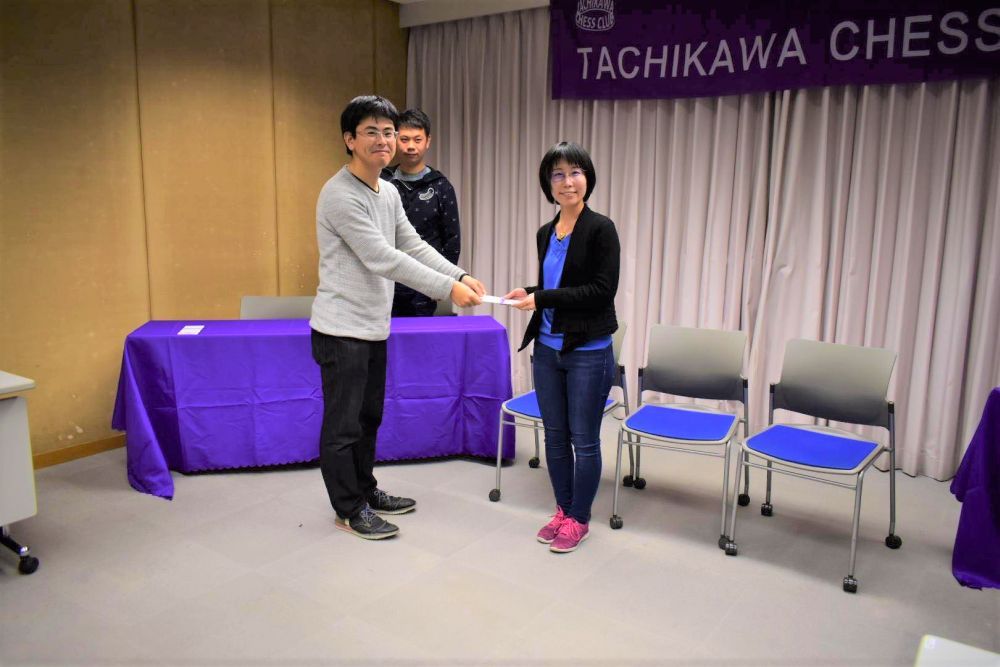 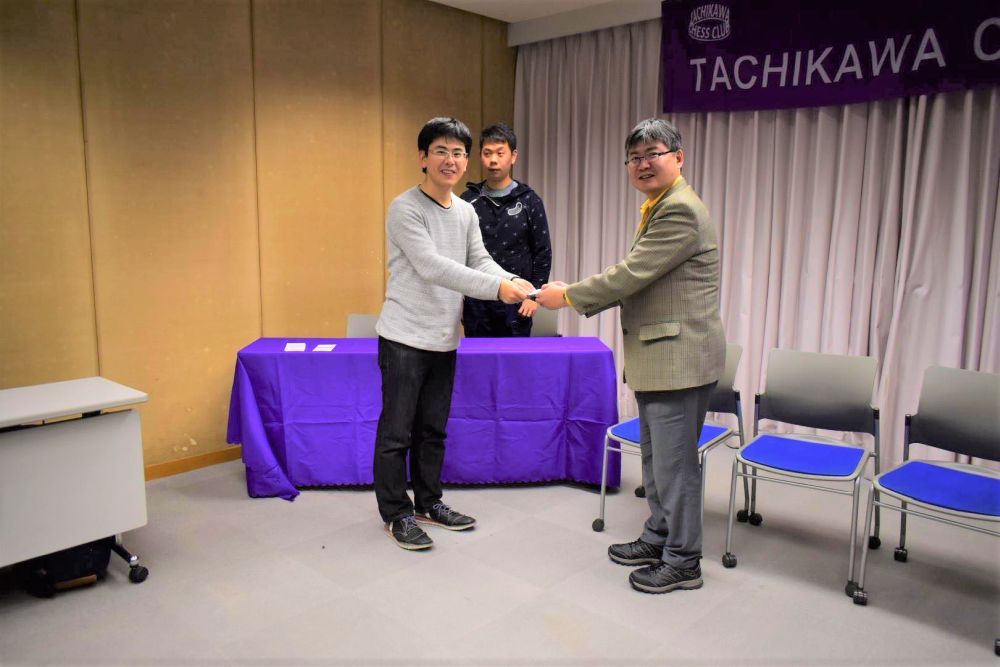 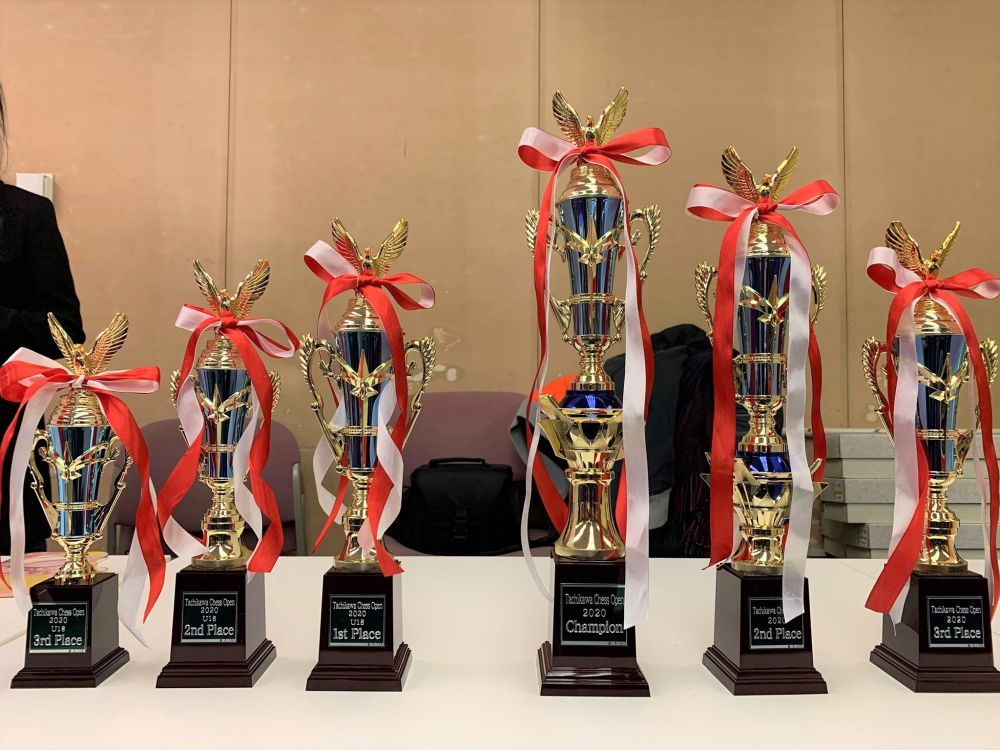 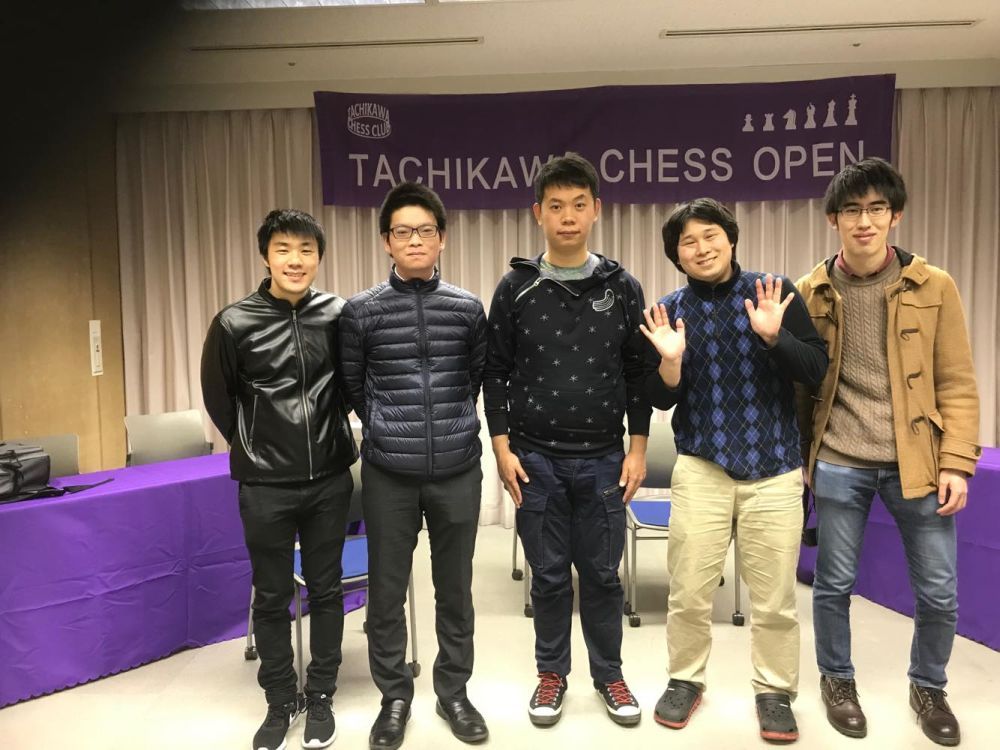 Picture with the GM we will be rooting for at the Candidates, your reporter, Nakagawa to the far left | Photo: Seiji Nakagawa

Overall we hope this tournament will be the first of many Open FIDE rated tournaments in Japan hosted by local organizers. 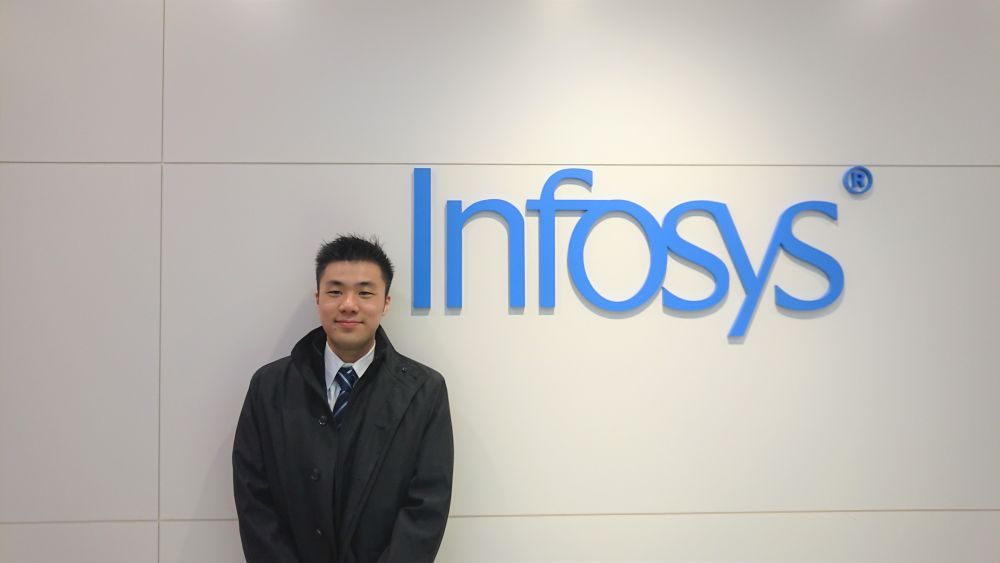 Seiji Nakagawa is a Japanese participant but having lived in Toronto, Canada for ten years, his FIDE flag is Canadian. He currently works for the Japanese branch of Infosys, as an Associate Software Engineer.