The Queens of Problem Chess

While over the years there has been a remarkable surge in the number of females participating in chess tournaments, the field of chess composition has remained woefully alien to the feminine touch. Nevertheless amidst the dearth there have always been inspiring exceptions. On the 8th of this month when the world observed the International Women's Day celebrating women achievements across diverse socio, economic, political, and cultural disciplines; our author, Satanick Mukhuty, took the opportunity to research some of the most influential female figures in chess composing.

Until very recently, Edith Baird was the only prominent female composer I had a little knowledge about. But in the process of researching for this particular article, I had the good fortune of discovering a number of them. I would begin by putting down the following two-mover which, quite impressively, was composed more than 150 years ago by a Dora Nesbitt of America. Dora was most certainly an actual person and not just a pseudonym taken by one of the male problemists of that time, and presumably this is the oldest problem by any female on record.

If you are an experienced problem solver then you might frown upon the unprovided 1...Qc1+ which makes the solution easier to find. Moreover the key move 1.Qf4! lacks subtlety in that it comes with a check. But hey, this was 1868, a time when all these artistic principles weren't all that well established. I am frankly fascinated to even learn of a woman trying her hand at composing one and a half centuries ago.

It turns out that before Edith Baird came to the scene, there was one more woman who graced the art of problems with her brilliance. Sophie Schett or Sophie Schett-Merfort (1836 - 1902) lived in Ebreichsdorf near Vienna, she was born 23 years before Baird and was perhaps the first important female figure in chess composing. Very little is known about her life but as it appeared in one of the volumes of the Oesterreichischen Lesehallehe, she was presumably the daughter of a Robert Merfort of Unterwaltersdorf and was married to a Lieutenant Sigmund Schett who died in 1888. Sophie composed over a hundred chess problems in her lifetime and most of them got published in various reputable journals and international magazines towards the end of the 19th century. Her creations were marked by their unusual sharpness and piquant wit. You can find 96 of them enlisted in the Yet Another Chess Problem database here.

We posted the above problem on various social-media platforms of ChessBase India in the morning today. The solution here 1.Rb4 d2 2.Bxa6 d3 3.Bb7 d4 4.Bxe4! Kxe4 5. Rb5 Ke3 6. Re5# is typical of Schett's style. It is simple, certainly lacking in sophistication that you would encounter in modern more-movers, yet very well-hidden! As you can read here, it was Dr. Fritz Emil Giegold, the legendary Rätselonkel, who later in the 1920s and 1930s, brought such one-liners into vogue. I will quote three more problems by Schett before moving onto our next composer.

Now let's move to a slightly more complex territory. The queen in the above position is badly placed on a3. The most natural square for it seems to be b2 and hence 1.Qb2! is the key. 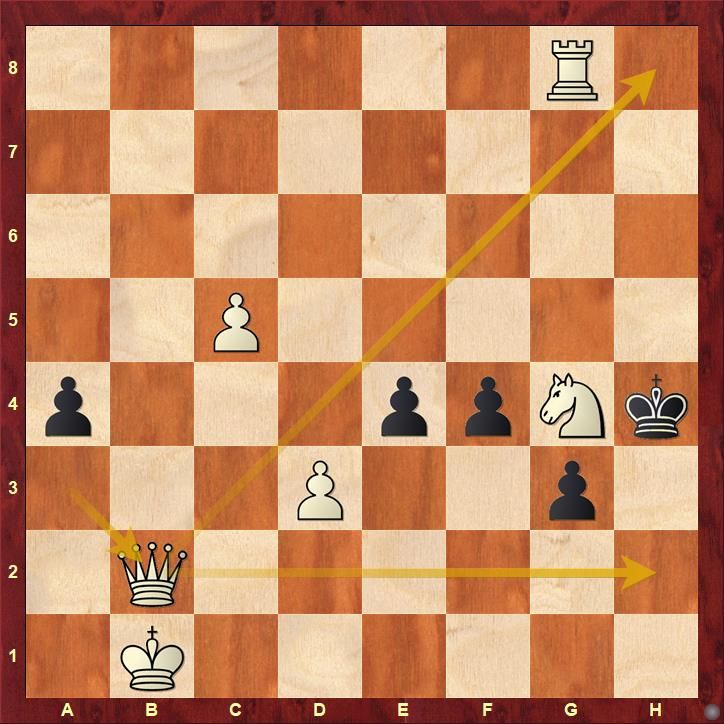 The queen on b2 cuts across two very important lines threatening 2.Qh8# at the same time. What will White's response to 1...Kh2 be?

Edith Elina Helen Baird (1859 - 1924), my next problemist of interest today, is by all means one of the greatest of 19th century. She was born at Hareston Manor near Plymouth in the United Kingdom. The daughter of Thomas Winter-Wood, a writer, and Eliza Ann (Sole) Winter-Wood, Edith took to chess early in life as her father, her mother, and her older brothers Edward and Carslake were all either amateurs or tournament-level chess players. In 1880 she married W. J. Baird, Deputy Inspector-General of Hospitals and Fleets for the Royal Navy.They settled in Brighton, where their only child, Lilian Edith, was born. Like her mother, Lilian too showed a marked precocity in chess and started composing at a very early age but sadly her interest in this field weared out during her teens.

If one has to single out one problem from Baird's rich oeuvre then it has to be the one presented above. This little miniature won the first prize in the prestigious Hackney Mercury three-mover tourney with a limit of six pieces which featured all the great composers of the time including all-time greats like  B. G. Laws, P. H. Williams and James Raynor.

Let's end this section with a problem composed by Edith's daughter Lilian. Interestingly, she made this when she was just ten years old and it also won a prize!

The next composer in today's list, Odette Vollenweider, is arguably the most the prominent female composer of the modern era. Born in Zurich on the 30th of June 1933, Odette published her first problem at the age of 25 under the male pseudonym of Gabriel Baumgartner. Now 86 years old, she is an Honorary Master of chess composition and has also been an excellent author serving as the editor of the chess problems section of the Neue Zuercher Zeitung for more than thirty years and contributing several theoretical articles in the magazine of Die Schwalbe.

The next problem too has two visible squares b2 and g6 for possible Novotny sacrifices. But the key is the unlikely 1.Qg6! which comes with a quadruple threat of 2.Ne4#, 2.Ne6#, 2.Rxc6#, and Nd3#. But the variations are striking in that we see how each defense parries three of the four threats and induces a unique mate. For example 1...Qe8 thwarts 2.Ne4#, 2.Ne6#, and 2.Rxc6# but uniquely allows 2.Nd3#. Similarly, 1...bxa3 too allows 2.Nd3# to happen uniquely defending against all other threats. The other thematic variations 1...Qxd6/Rxg6 2.Ne4#; 1...bxa5/b5 2.Rxc6#; and 1...Nxd6/Bxg6 2.Ne6# also exhibit the same dual avoidance property. A key containing multiple (three or more) threats is usually considered weak but this remarkable feature in which the defenses separate the mate threats and induce them uniquely is termed as the Fleck theme and is certainly seen as a merit. Lastly, note that the other Novotny try in the position 1.Bb2, threatening 2.Qd4# and Nb3#, is simply refuted by 1...b3!.

Odette collaborated with a number of composers. Here's a picture of her with Vlaicu Crisan | Photo: problemskak.dk
...And with Klaus Wenda and Reto Aschwanden | Photo: chesscomposers.blogspot

The above problem was actually composed in memory of Hans Johner. Hans was the younger brother of Paul Johner, the accomplished musician and International Master of practical play from Switzerland, and as I have previously mentioned Odette dedicated the book Kostbarkeiten der Problemkunst (1966) to him covering not only his compositions but also twenty of his over-the-board games.

A picture of Johner from Odette's book.

I end this write-up by talking about Julia Vysotska from Latvia, who is undoubtedly a star in today's problem community. Julia is not only an extremely talented composer but she is also doing some excellent work in popularizing the art of chess compositions. She dwells mostly in fairy problems these days but also has a few orthodox helpmates to her name.

Since fairies, Julia's main area of interest, is beyond the scope of the present article I will simply quote two of her orthodox helpmates here! 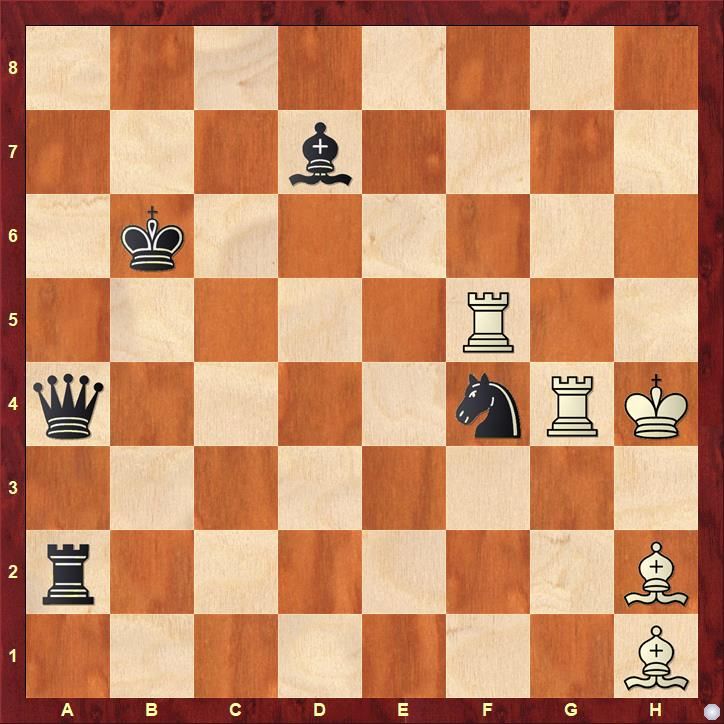 The problem above shows a special line opening and closing effect known as the bivalve where the move of one piece closes the line of another piece but opens the line of a third piece. We can see 1.Ne2 here obstructs the path of Black's rook on a2 but also clears way for the white rook g4 and thus one of the solutions is effected by 1...Re4 2.Kc6 Rb4#. The other solution 1.Ne6 Be5 2.Kc5 Bc7# is similar in concept but only makes use of White's other rook-bishop pair and this time the black knight hinders with the bishop on d7 instead. Notice also how the strategic bivalve effect in the two solutions takes place on orthogonal lines, this picturesque theme framework is what is known as the Orthogonal Diagonal Transformation. 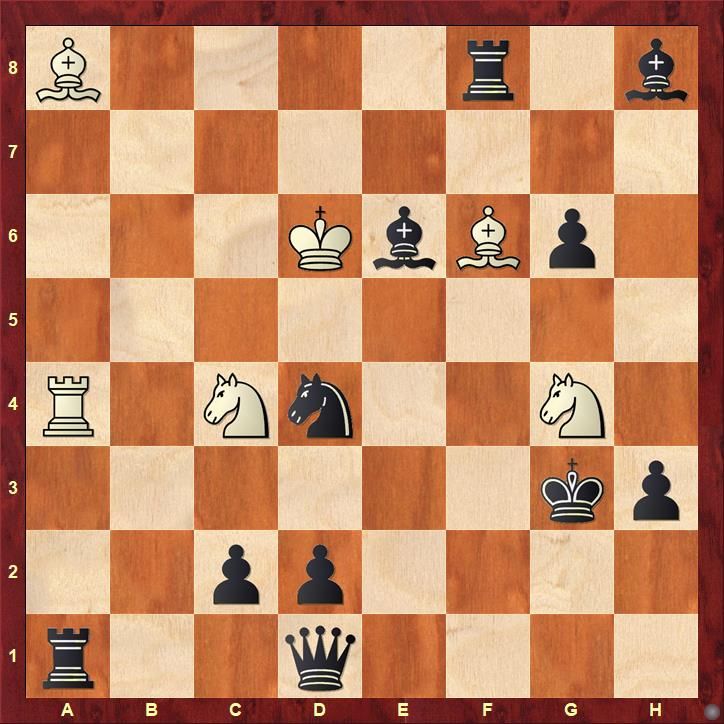 The final problem is richer in complexity and its play of line opening and closing. Here are the solutions: 1.Nf3 Nce3 2.Ne1 opens the line of wRa4 and closes the line of bQd1 thus facilitating 2...Nf1# and analogously 1.Bxc4 Bxd4 2.Bf7 closes bRf8 but opens wRa4 to allow 2...Bf2#

To know more about Julia and her work you can visit her website. She also provides a brief bio here. There are certainly other great female composers in the problemist community today. You can learn about some more of them in this wonderful list compiled by Diyan Kostadinov of KobulChess.