Mutual zugzwang or reciprocal zugzwang refers to those special kind of situations where whichever side it is to move finds itself in a disadvantageous position. The idea continues to thrive since ages as one of the primary curiosities in endgame composition. In today's article, the author Satanick Mukhuty, presents a uniquely deep scenario of the same in a pawn study. An endgame with just a few pawns and a pair of kings on board is the simplest type of position to analyse. But in chess, the infinitely rich game of possibilities that it is, even such meagre material can give rise to unusual complexities!

What is a Mutual Zugzwang?

The German expression zugzwang is one of the most commonplace words in chess lingo. The wikipedia states that the term was first used in English around 1905 by World Champion Emanuel Lasker. It basically describes a kind of paradoxical situation where one player is put at disadvantage because they must make a move when they would prefer instead to pass and not move. Less understood perhaps is the idea of mutual or reciprocal zugzwang which is a more special case where the position is such that whoever is to move is in zugzwang. In other words, the outcome of a position in mutual zugzwang hangs entirely on the question of whose turn it is to play. Let us analyse a simple pawn ending to grasp the concept better. 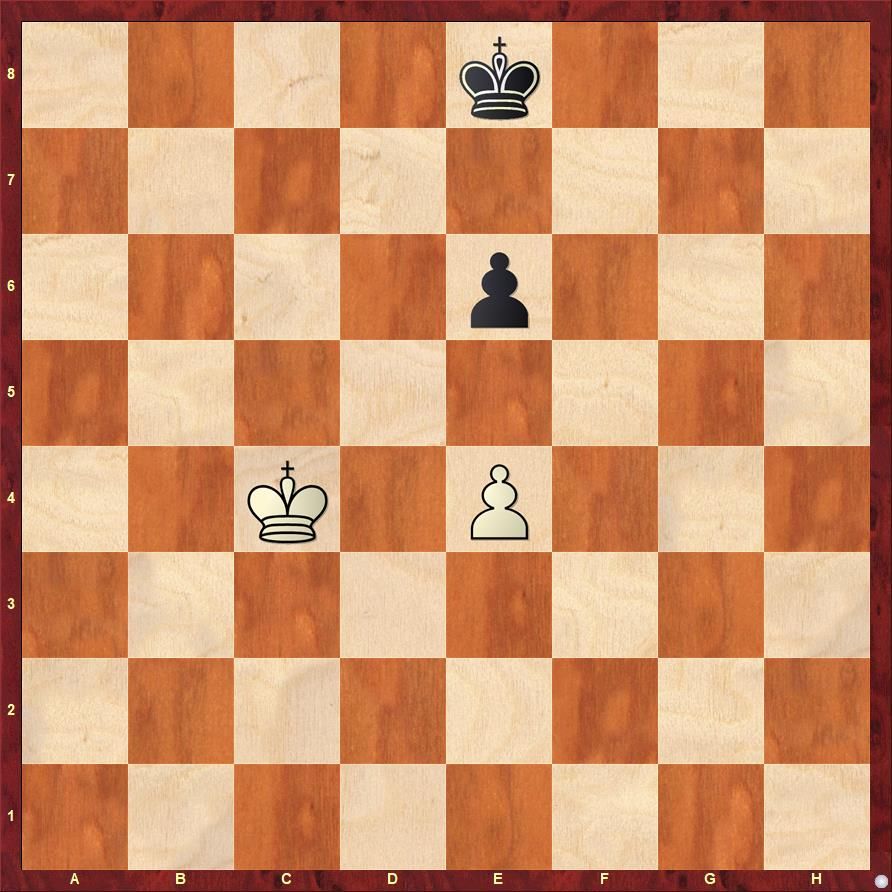 White to move and win 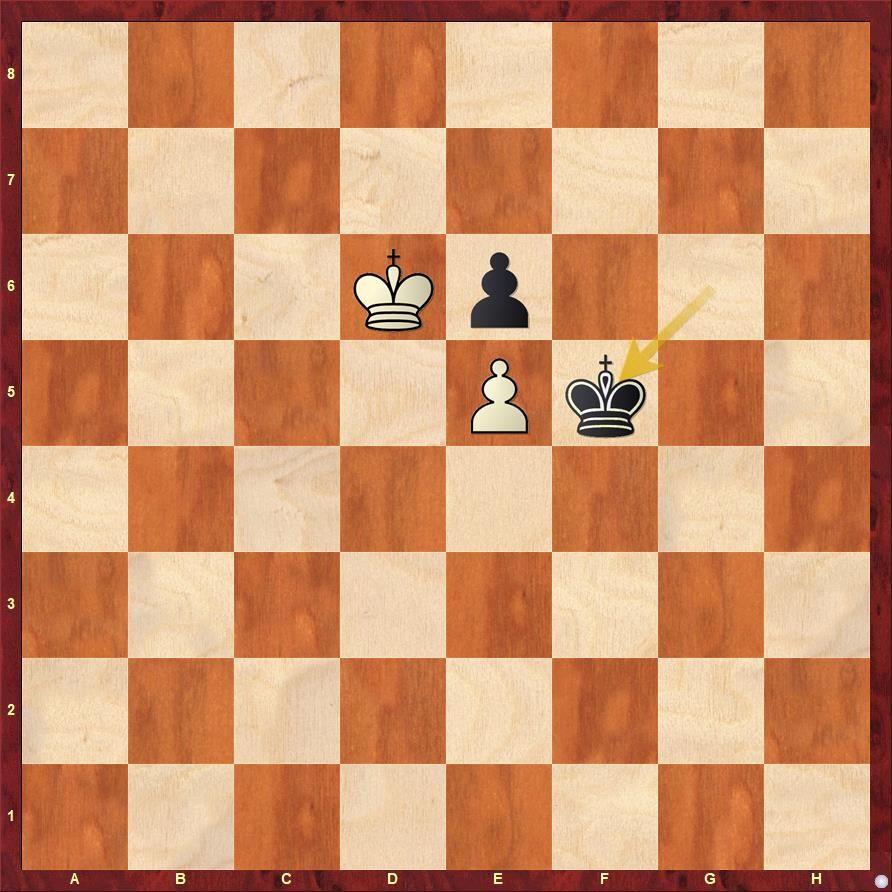 After 3.Kd6? Kf5 any move by White allows Black to capture the e5 pawn and win the game!

The play continues 3...Kg5! hoping for 4.Kd6 once again but there is 4.Kd7! and now after the forced 4...Kf5 5.Kd6 White wins, we reach the same position as above but only this time it is Black who is in move and it's a zugzwang. 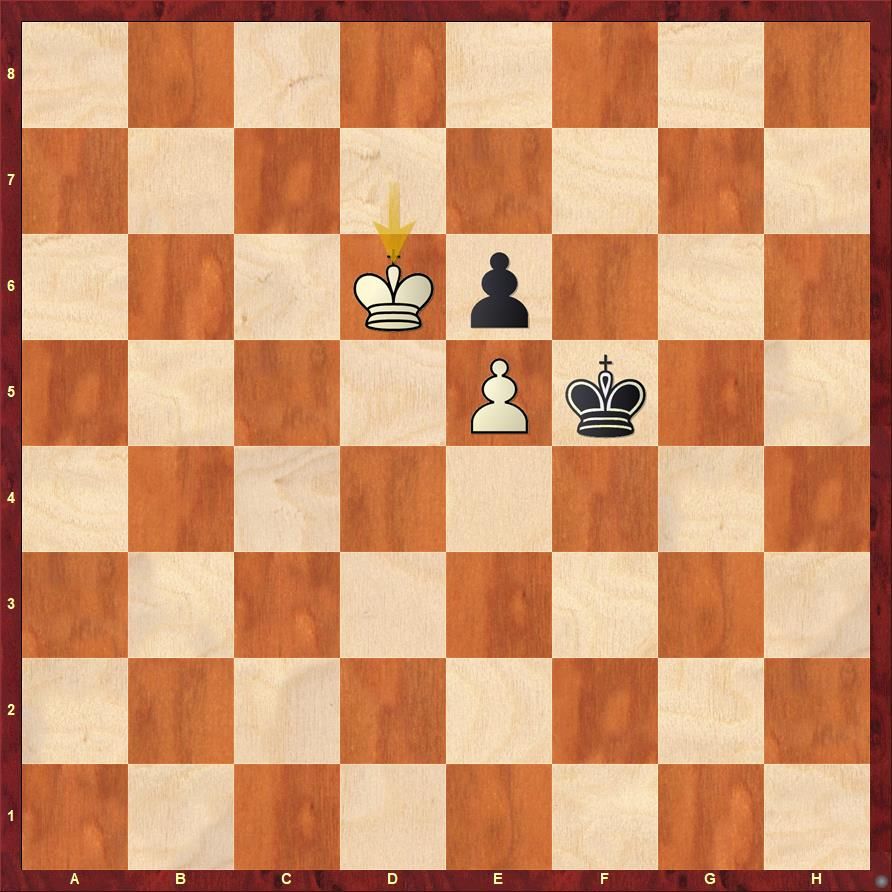 This is same as position X but only this time it is Black's turn to play!

The Position X indicated above clarifies how mutual zugzwang differs from normal zugzwang. In studies most of the time composers strive to demonstrate this by incorporating a try in which White, having an extra move, gets into zugzwang; while in the actual solution the same position occurs but with Black's turn to play. Now we have a look at the main study of the article which presents a really deep scenario of this theme. The idea of this composition was first conceived by Richard Becker in 2009 but it remained largely overlooked only to be rediscovered by Árpád Rusz in 2017. Árpád Rusz (left) is one of the best known contemporary study composers from Romania. Richard Becker (right) is a strong chess player and the leading study expert of the USA.

The study below was published in the memorial tourney of the Ukrainian poet Andrew Malyshko in 2017. Before you look into the analysis, try to at least guess the first move of the solution! 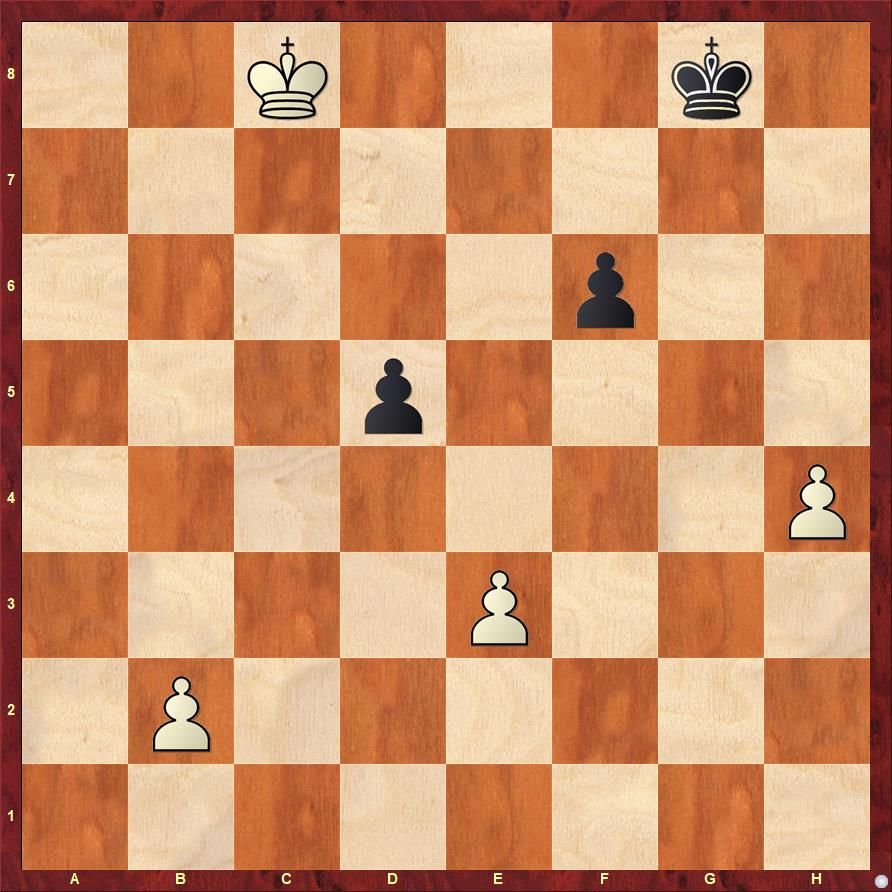 White to move and win

Let us begin by examining the most natural 1.b4 f5 2.b5 f4! 3.exf4 d4 where now both sides rush to make queens 4.b6 d3 5.b7 d2 6.b8Q d1Q, a curious position is reached where White has two extra pawns but what is the evaluation of this position? 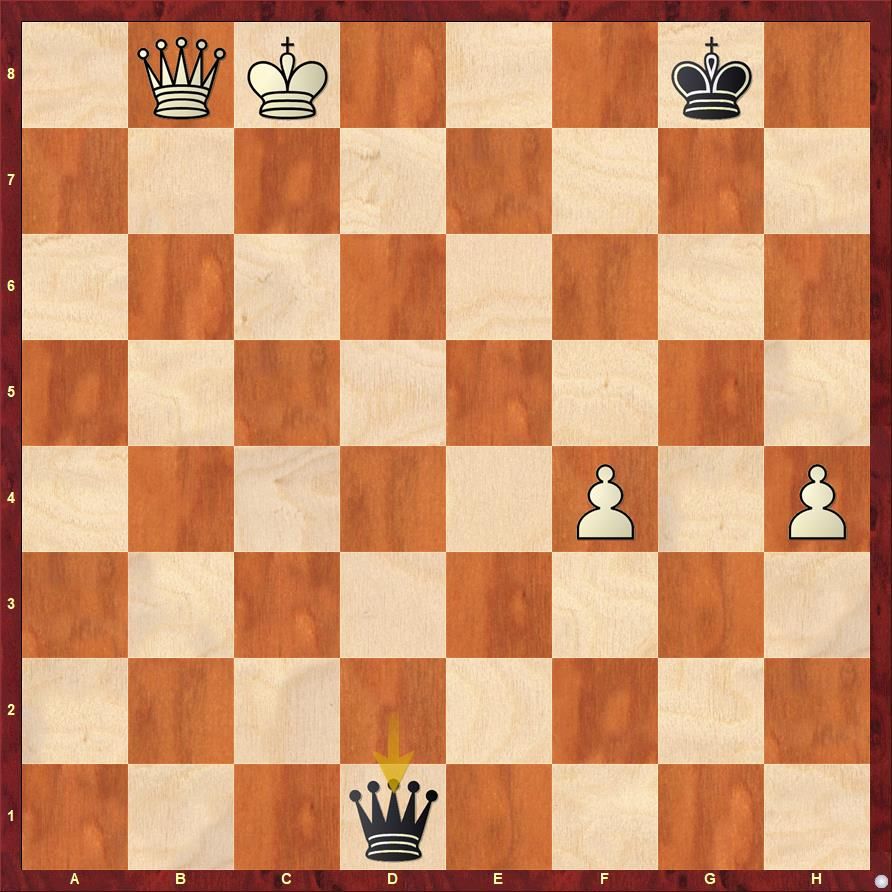 The winning idea therefore involves losing a tempo deliberately and reaching the same position X but with Black's turn to play. The solution begins with the surprisingly restrained 1.b3!! - "Patience", said Pal Benko, "is the most valuable trait of the endgame player". The next few moves are obvious, 1...f5 2.b4 f4 3.exf4 d4 4.b5 d3 - and once again both sides rush to make queens but in this case Black promotes first as White has granted him an extra move - 5.b6 d2 6.b7 d1Q 7.b8Q 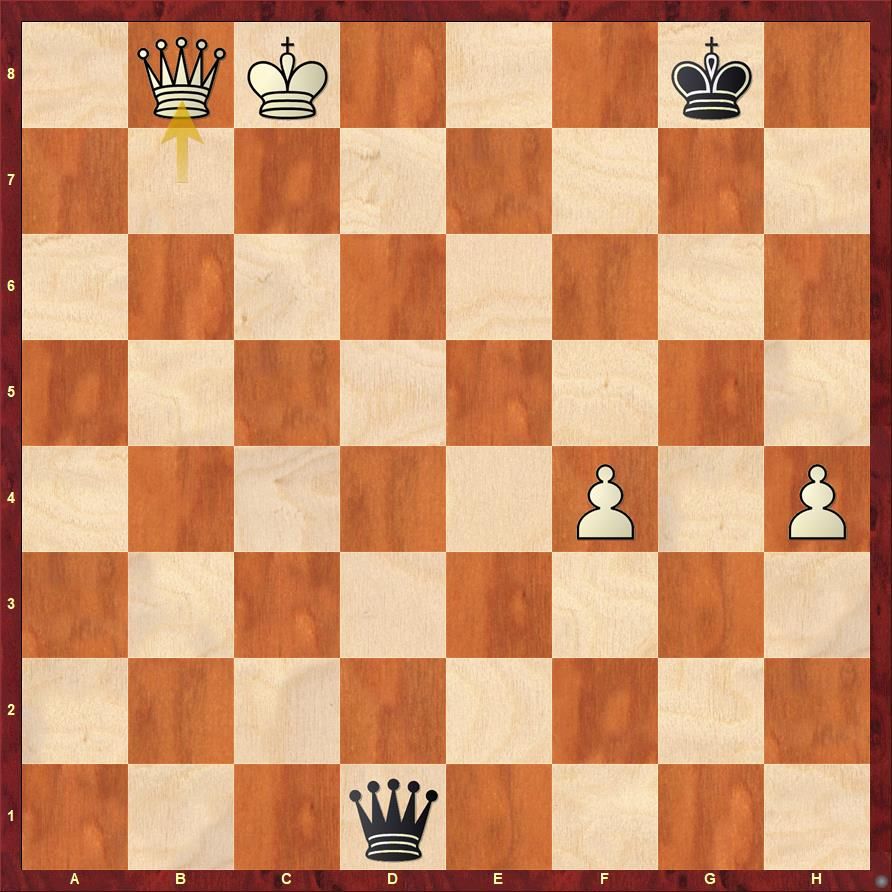 And we have reached position X but now it is Black's turn!

It is not easy to grasp that White is winning here but only in the previous position he was not. Apparently, a tempo has made all the difference. In this case White is able to force the exchange of queens and maintain at least one of his pawns with a won position. The mainline follows: 7...Qg4+ 8.Kc7+ Kh7 9.Qb1+ Kh6 10.Qb6+ Kh5 11.Qf6 Qxh4 12.Qxh4+ Kxh4 and we return back to just pawns endgame, although now this is much simpler. The white king is perfectly in time to support the f-pawn, 13.Kd6 Kg4 14.Ke5 and winning! Check the detailed analysis of the study below where it has been clarified further with some possible sidelines that the above position is indeed winning for White. 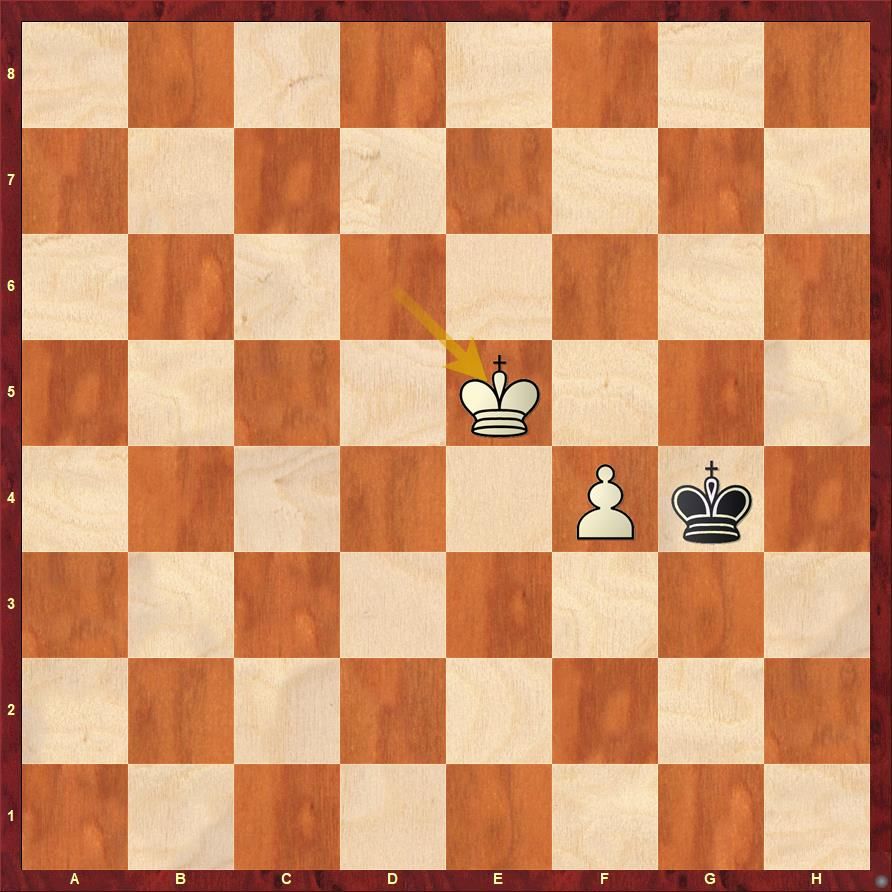 The end of the study.

Replay the full analysis of this exquisite pawn study here:

The author of this article would like to acknowledge Árpád Rusz's site Chess Endgame Study Composition where the above study was presented in September 2017.