After Round 7 the question to be answered was who would take 2nd place behind Vidit, and just 2 games later it was Vidit taking 2nd place after 3 harrowing losses on the final day! Duda was merciless, exploiting every inaccuracy and mistake to blow Vidit off the board, and keep himself in contention. Alireza Firouzja survived a really complex battle against David Anton, who missed a beautiful win at one point, and by the end of the round Vidit and Firouzja were to engage in a Blitz tiebreak to determine the winner, as the two had the best tiebreak among the lot tied on 5/9. A shocked Vidit bravely mustered up the strength to fight, but his nemesis, the clock, managed to win the battle, as he lost on time in the second game, to concede the tournament to the rising Iranian.

These last two days have been very disheartening for Vidit Gujrathi. First he blundered in time trouble against David Navara, after rejecting the draw, then he makes one mistake and is ruthlessly punished by Duda. Thanks to his previous rounds however Vidit had the best tiebreak, along with Alireza Firouzja, and the two play a blitz tiebreak. Vidit played good chess, managed to put pressure, but couldn't make the switch from the classical to blitz time control. Vidit lost in a drawish position in game one getting into a mating attack and got lost of time in the second game. The Indian had to cede the 1st place he had occupied for most part. Kudos to Alireza Firouzja though - he came into this tournament as a last minute replacement for Wei Yi, and while his play wasn't as good as it was in the 1st half of Wijk Ann Zee, it was consistent enough. Most importantly, he took his chances when it mattered.

Before going into the decisive tiebreak, let us take a look at the games that had the greatest impact on the standings - Duda-Vidit and David Anton - Firouzja: 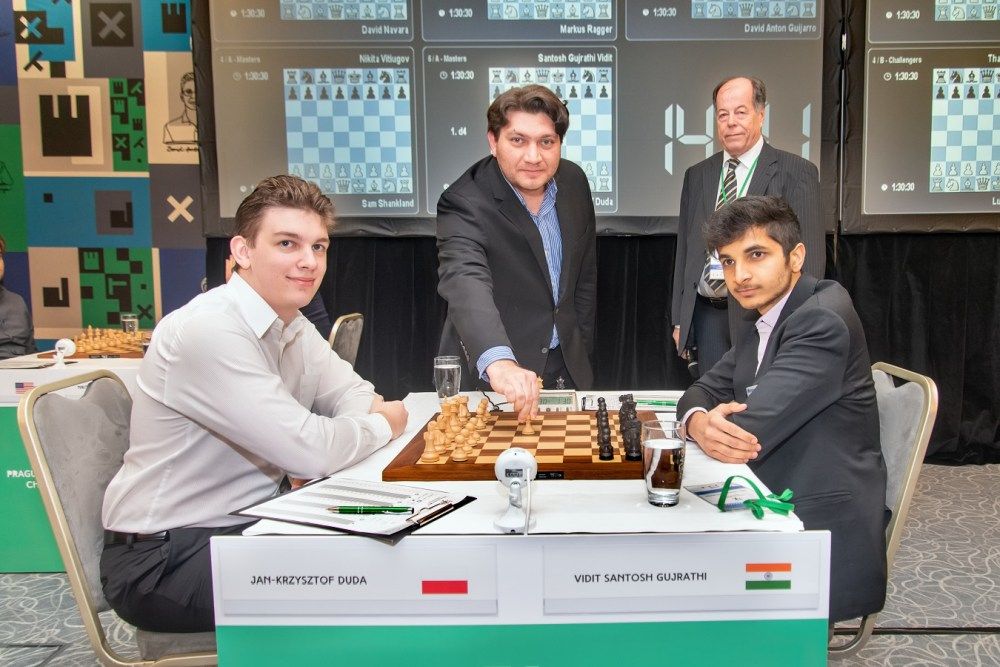 Duda's play was reminiscent of Kasparov in the 80s! | Photo: Prague Chess 2020 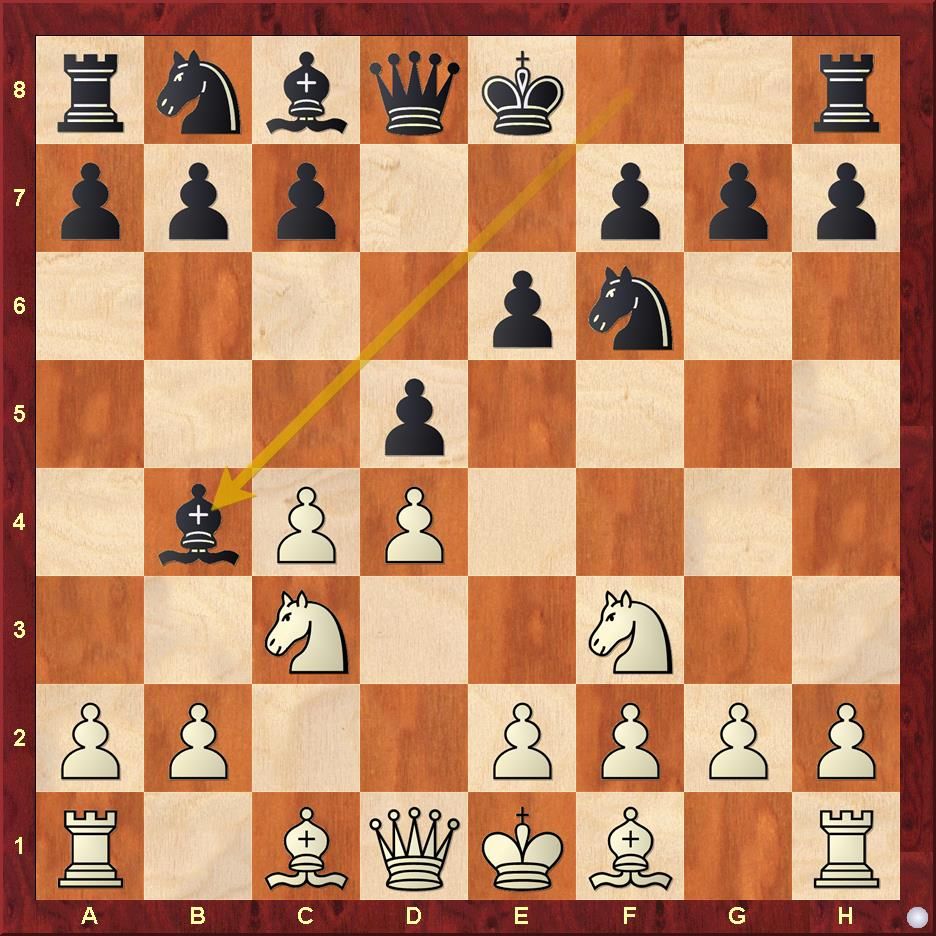 The game began with the Ragozin Defense, one of the theoretical tabiyas at the top, and a very safe way to play chess as Black. 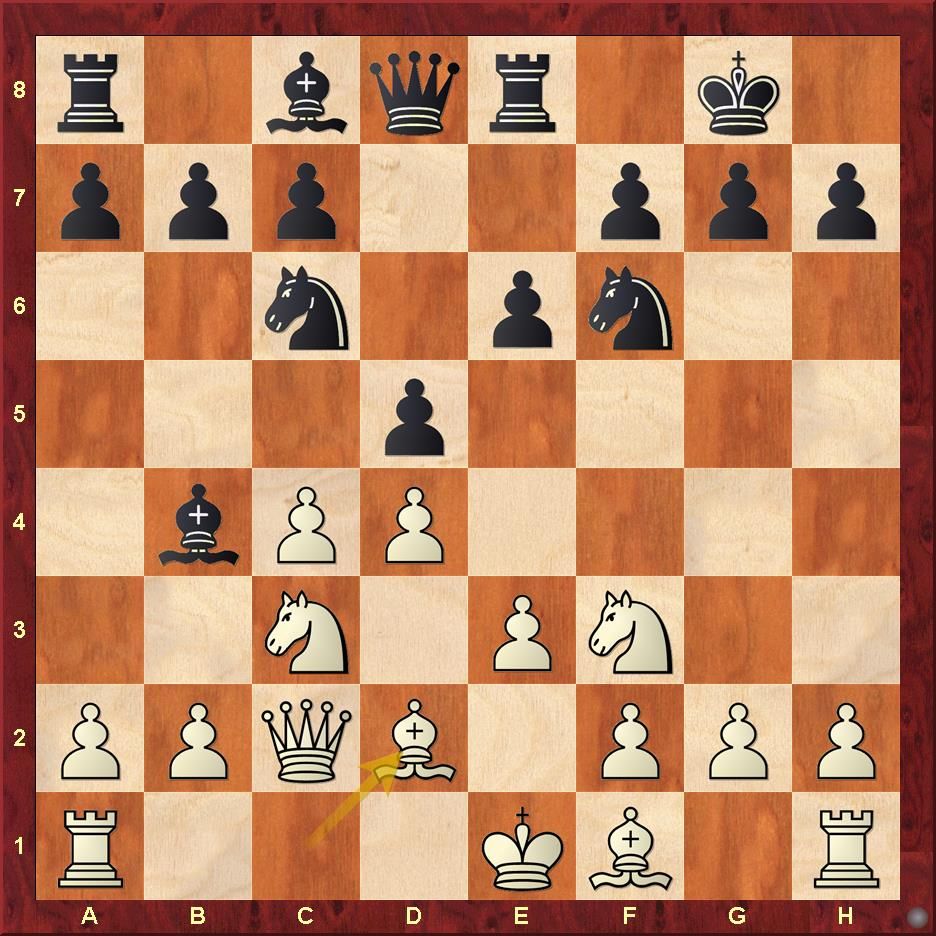 By now, it should have been clear that White is not going to castle kingside anytime soon - by delaying the development of the f1 bishop Duda hopes to launch a fast attack on the Black king. 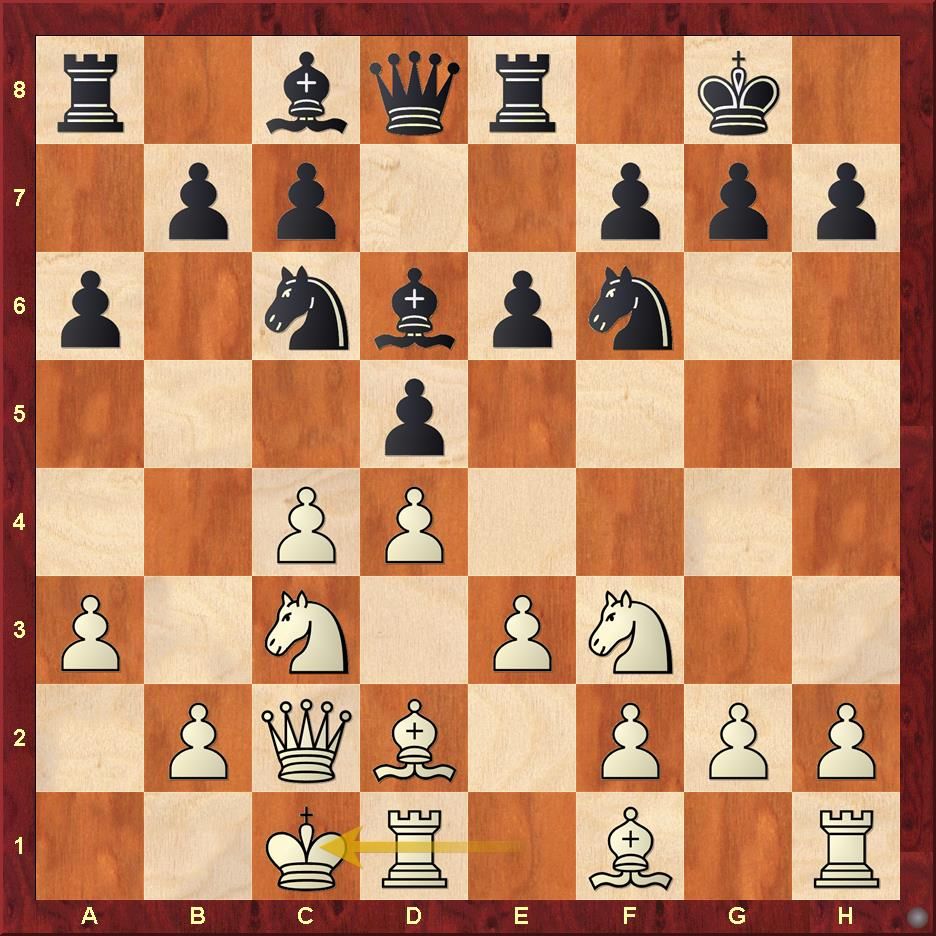 10.0-0-0! by Duda is a very interesting and sound practical decision, which reminded me of Kasparov's famous wins in his prime. White can afford to castle queenside in these QGD structures mainly because of the stable center he possesses, and the despite the engines evaluating the resulting positions as equal, it seems that White's play is always easier, and this counts for an important over-the-board factor that most players these days aim for. 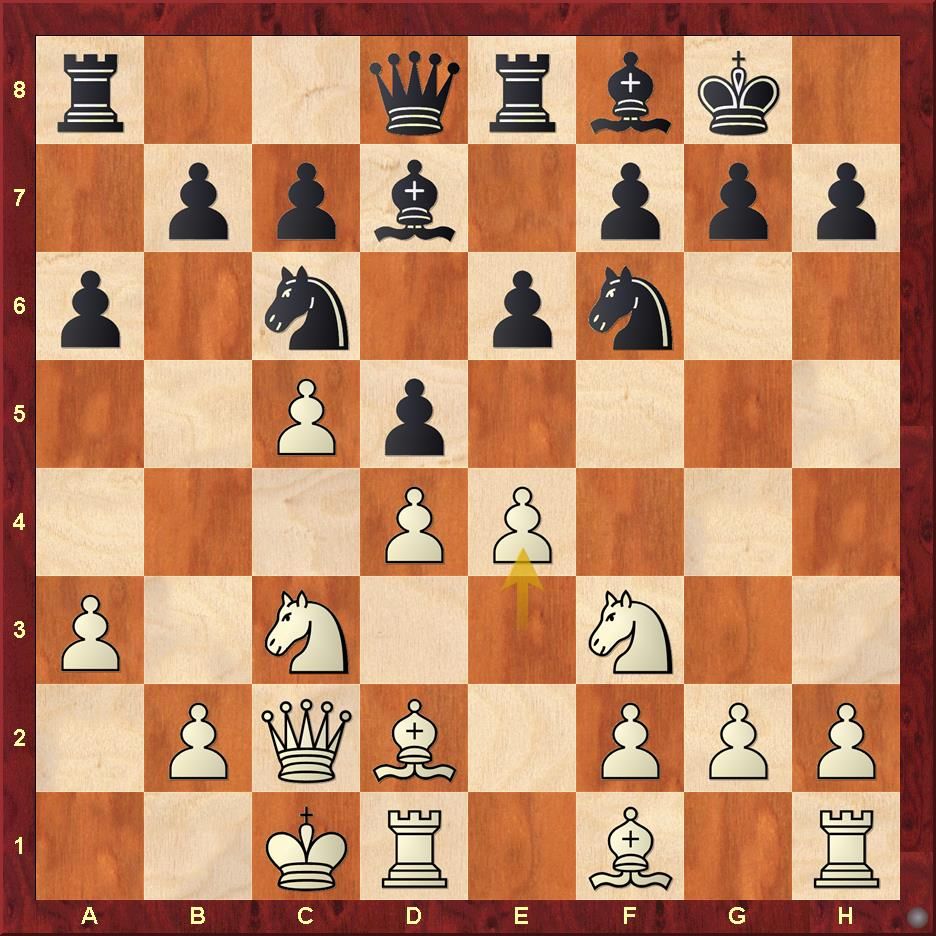 Duda soon began to play very aggressively in the center - 11.c5 and 12.e4 underlining White's ambitions on the kingside. 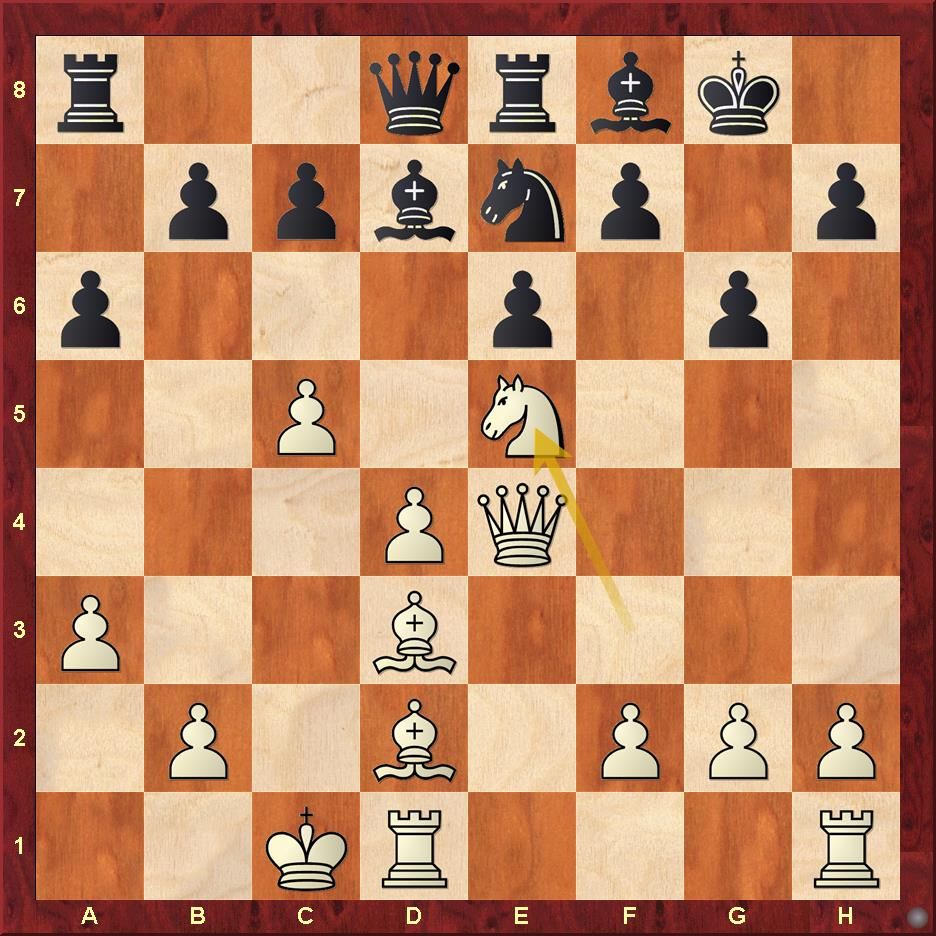 There are some cases where an engine's evaluation is useless. This is one such instance. Once you turn them off, it becomes clear that White has a plan and easier development, along with an irritating initiative on the kingside. It also becomes incredibly hard for Black to find a move here. This is a test position. Can you find Black's best move here, or the best sequence of moves to hold fort? Mind you, Vidit's 16...Bd7? was his only mistake in the game! 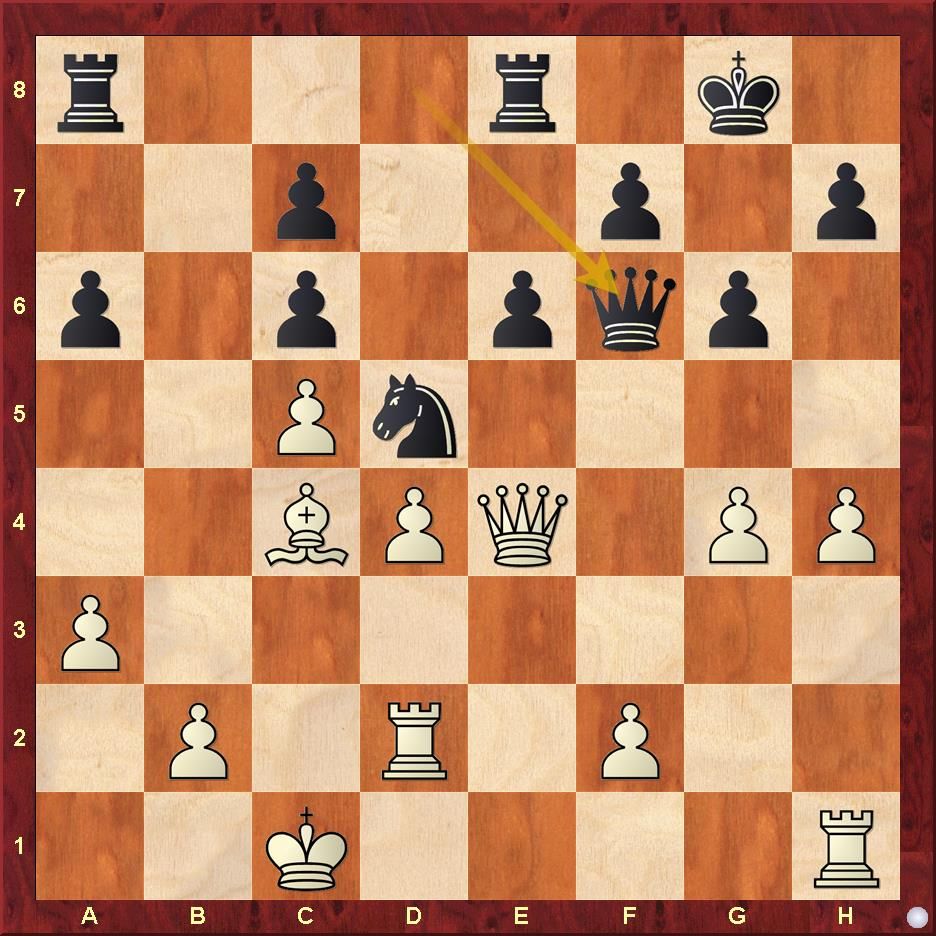 Perhaps the only slight imprecision Duda made in the game - instead of the immediate 24.h5, it makes sense to prevent any counterplay with 24.f4! a5 25.h5, where Black is practically lost. However, the game didn't last too long either after Duda's move in the game - this was a perfect showcase of how one mistake is often too costly at the top! 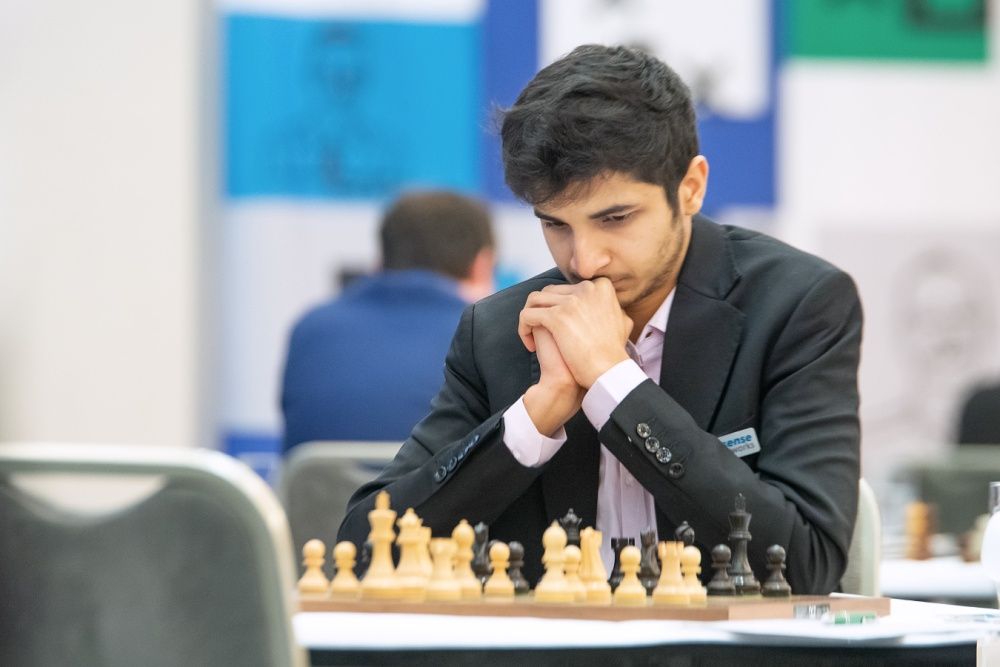 Vidit fought with all his might, but the ghosts of Round 8 seem to have clouded his mind in the final round. | Photo: Prague Chess 2020

In the other clash between the two chasers, it was David Anton who started off on the right foot, neatly outplaying Alireza Firouzja and landing himself in a won position, till the Spaniard spoilt the win in time trouble: 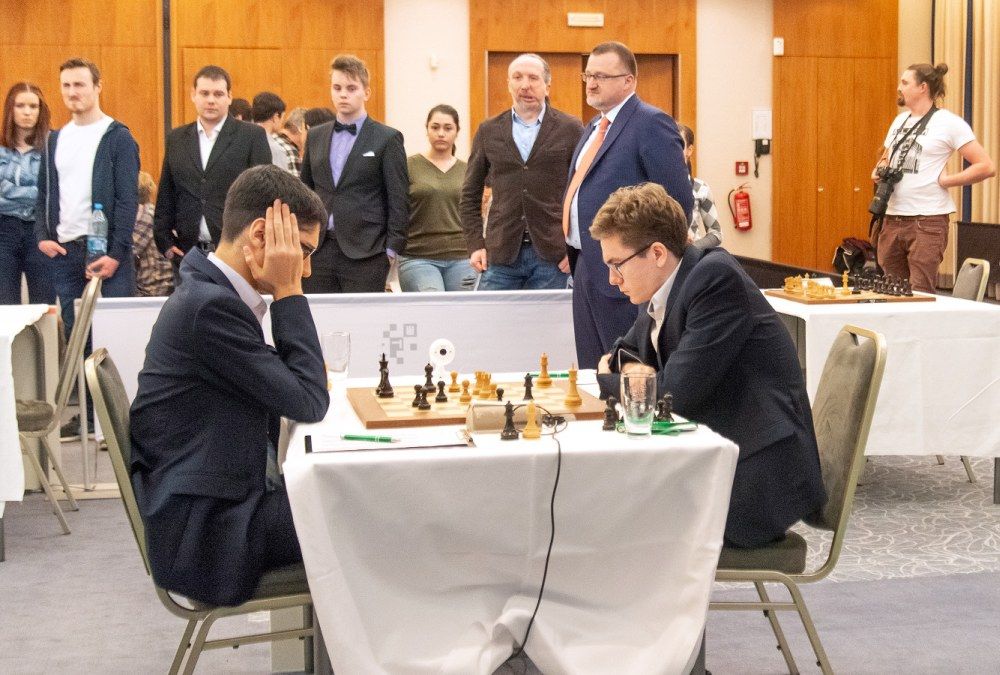 This Winner-Takes-All game was a roller-coaster ride! | Photo: Prague Chess 2020 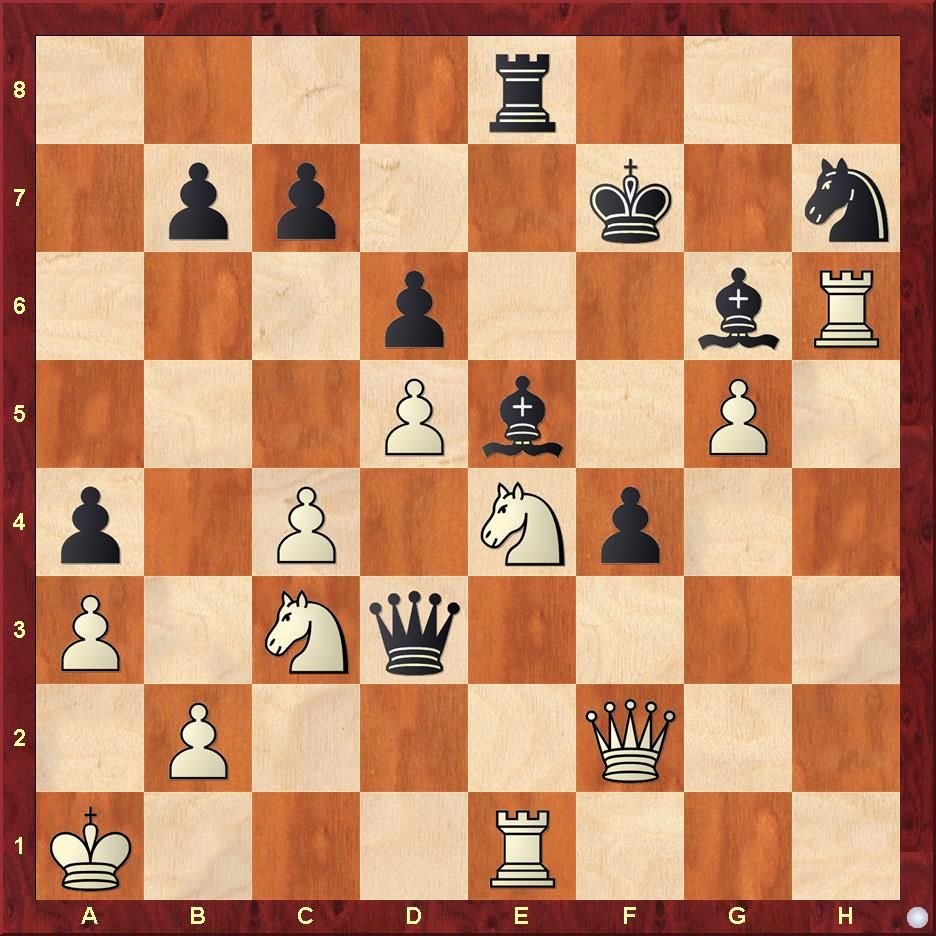 Firouzja's beloved KID was on the board. Here David Anton could have ended the game with a bang. Can you find White's winning sequence here?

After horribly misplaying his position in time trouble Anton was soon in a dead lost position, but now it was Firouzja who gifted his opponent a half point: 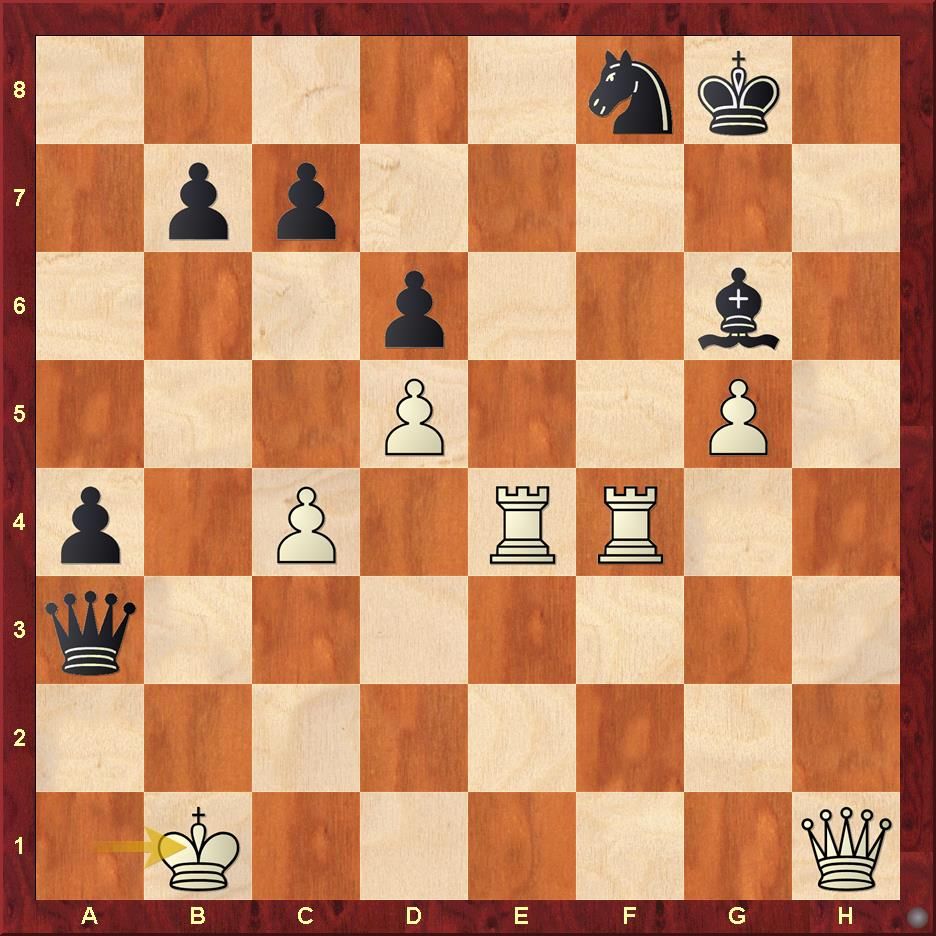 Firouzja immediately went 44...Nd7?, which was a serious mistake. Instead, Black should throw in a series of checks starting with 44...Qd3+! and only after forcing the king to a2 should he play Nd7. 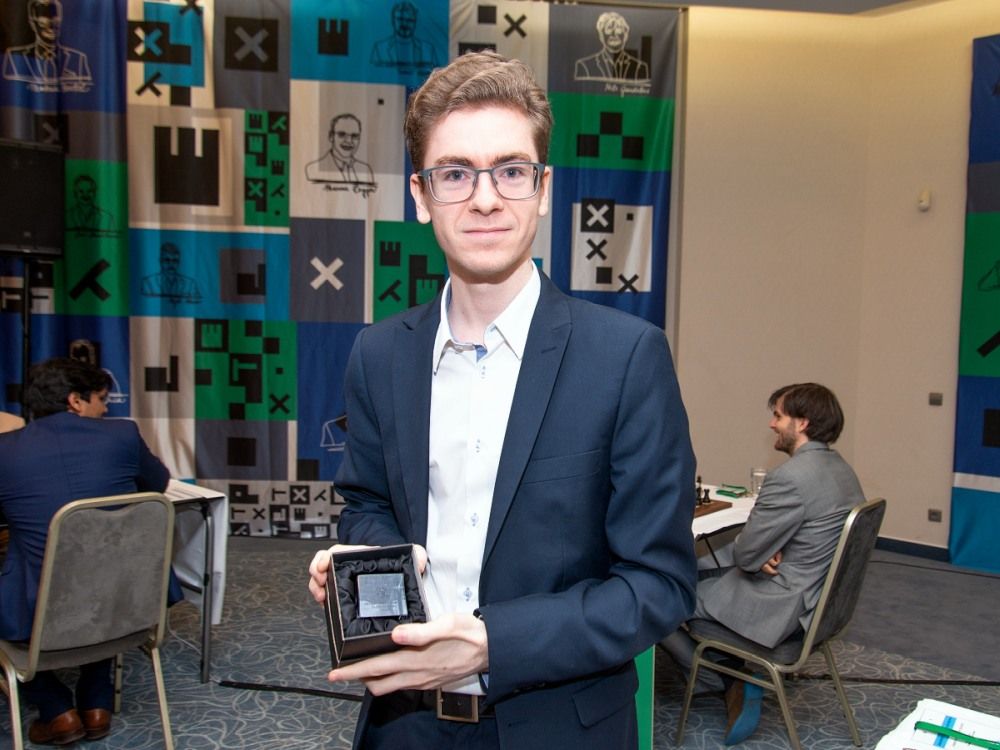 David Anton played an exciting brand of chess, and had he taken all his opportunities he would have won the event by a country mile! | Photo: Prague Chess 2020

Sam Shankland was lucky to win today - Nikita Vitiugov missed an elementary combination on the 14th move to win atleast a pawn: 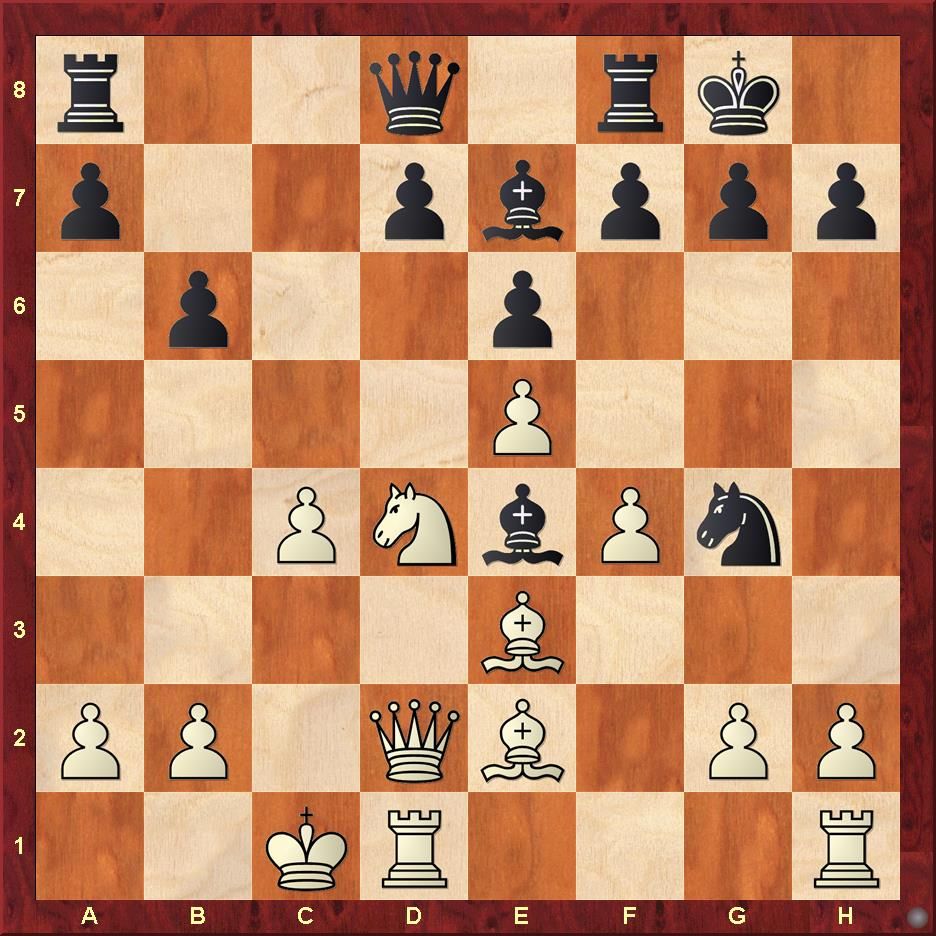 Black has a simple deflection combination here - 14...Bb4! 15.Qxb4 Nxe3 with a winning position. Instead, after 14...f5? Shankland managed to outplay his opponent in a long struggle to emerge victorious.

After coming back from the brink yesterday, David Navara played very ambitiously, and was aptly punished by Pentala Harikrishna: 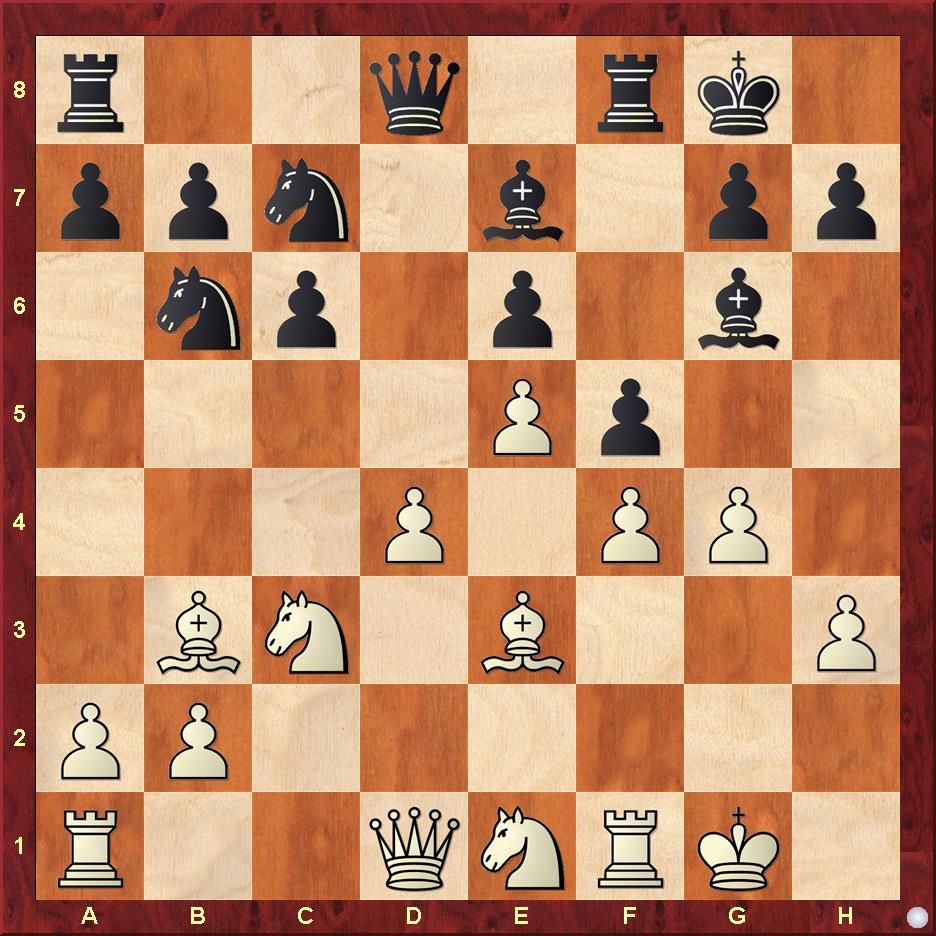 Black's last move 15...f5 gives White the option of playing 16.exf6, which is the only way to try and play for an advantage. Instead, after 16.Nd3, Navara soon landed in trouble, and Harikrishna played extremely well to finish the game off in his favour. 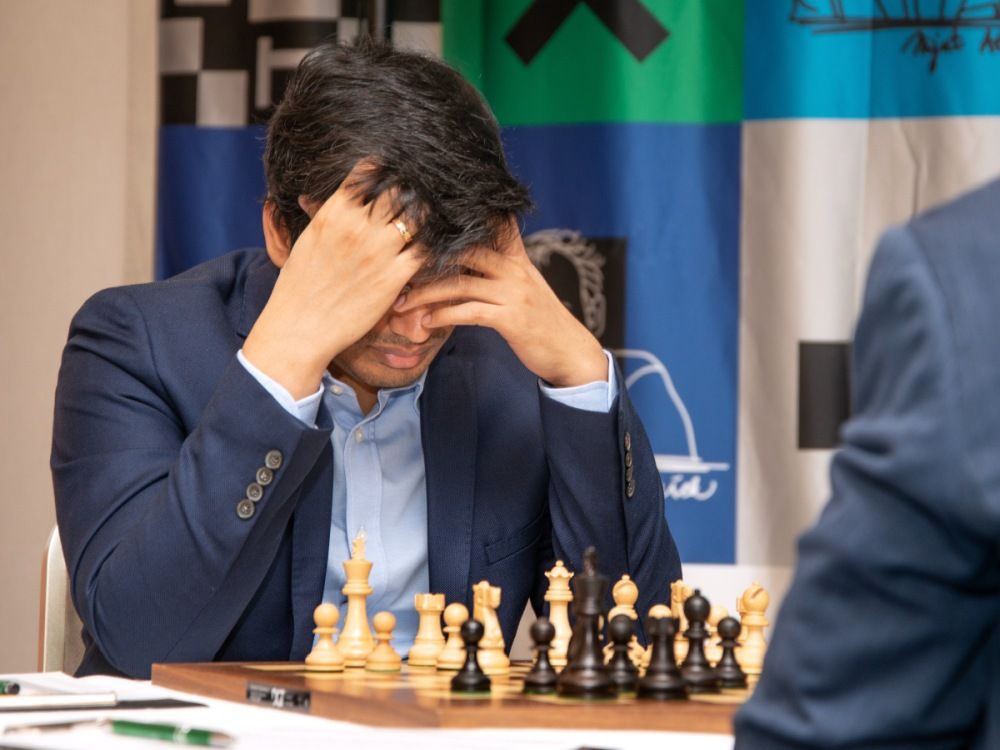 Finally Hari scores a win! Is this the beginning of another spurt? | Photo: Vladimir Jagr (Round 8)

Now then, on to the tiebreaks!

A major tie at the top with as many as five players scoring 5.0/9. But wait a minute? Why tiebreaks? According to Tie breaker 1, isn't Vidit the winner of the event? Not quite!

Well, according to the rules of the tournament, there will be a tiebreaker between the best two players for the 1st place, in case of a multi-way tie at the top. Here are the exact rules:

In case of a tie for the first place, there shall be a playoff between the top two players which shall be determined as follows:

3)More number of games with Black

The match will consist of 2 Blitz games, with a time control of 5 minutes + 3 seconds increment per move from move 1. Colors shall be determined by the toss of a coin, conducted by the Chief Arbiter. The winner of the toss shall have choice of color.

If the score is still level after the blitz game, the players shall play a single decisive “Armaggedon” game.

Thus, it was Vidit-Firouzja for the title of the Prague Masters 2020! 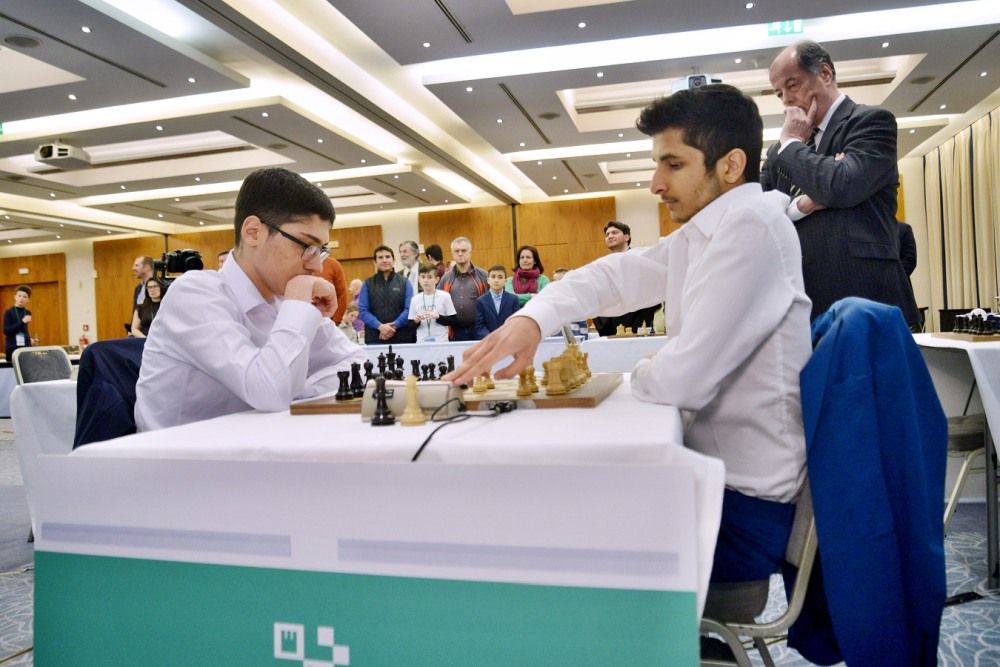 The game was a very complex strategic battle, with a lot of nuances. Vidit had a great chance at one point, which he failed to take: Here it is important for White to exchange bishops - 22.Ne5! gives him a pretty serious advantage due to the superb steed on e5. Instead, in the game Vidit played 22.g5, and soon found himself worse.

Firouzja managed to outplay Vidit from this position on, but gave White a surprising chance on move 36: 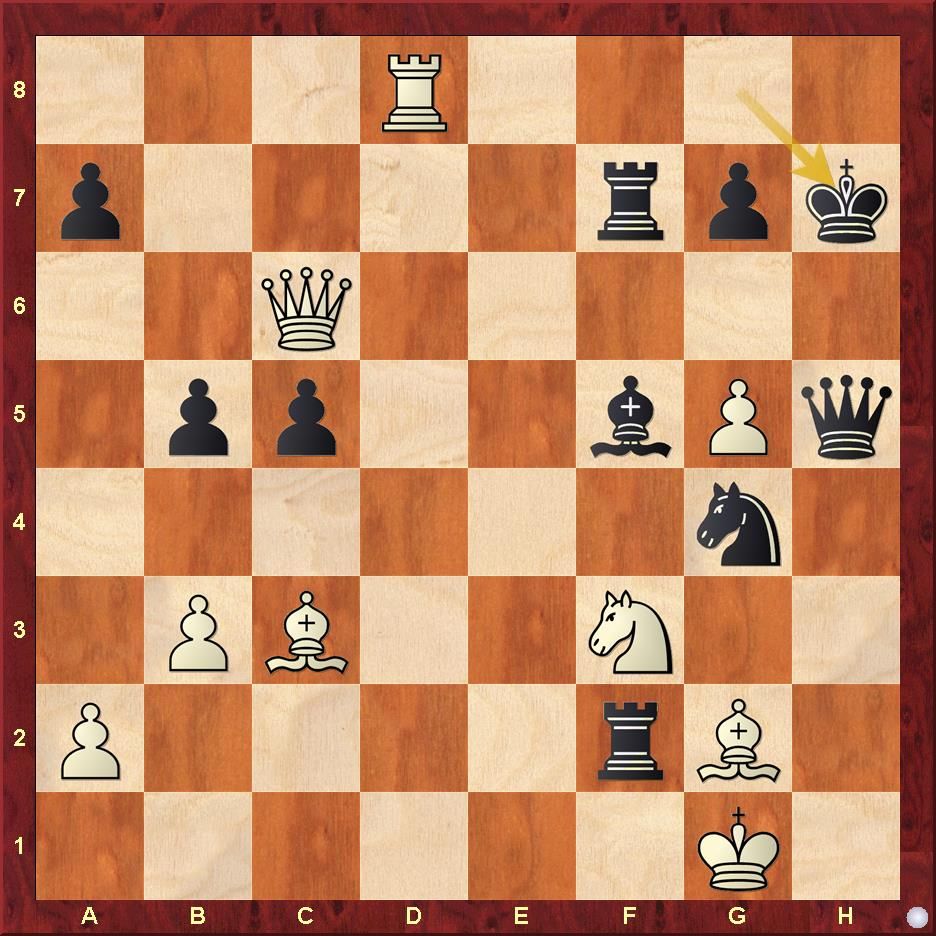 36.Qa8! with the intention of Rh8+ gives White a decisive advantage. Instead, Vidit's move 36.Qe8? was far weaker, and allowed Alireza to win after further adventures. 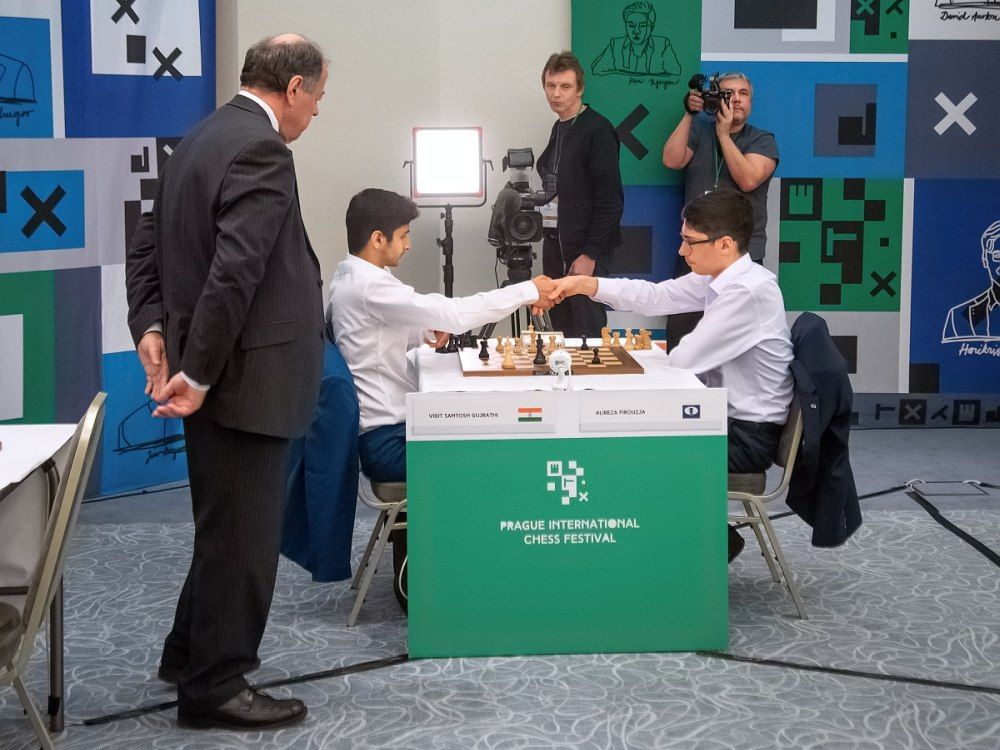 That moment when you realise that you have lost a game you should have won. | Photo: Prague Chess 2020 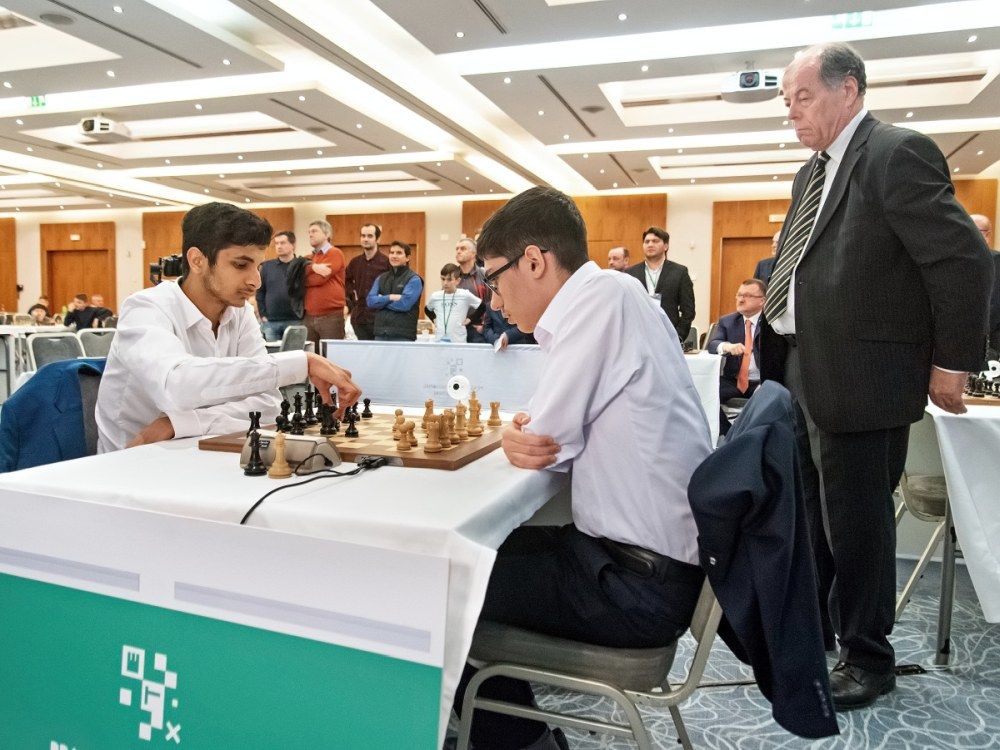 Vidit needed a win to force an Armageddon. Could he deliver? | Photo: Prague Chess 2020

The onus was on Vidit to win and he tried his best. He played really aggressively as Black - opting for the Sicilian Defense. Firouzja avoided theory with the delayed Alapin, and it was a really crazy battle. When it seemed that Vidit would start pressing for a win, disaster struck! 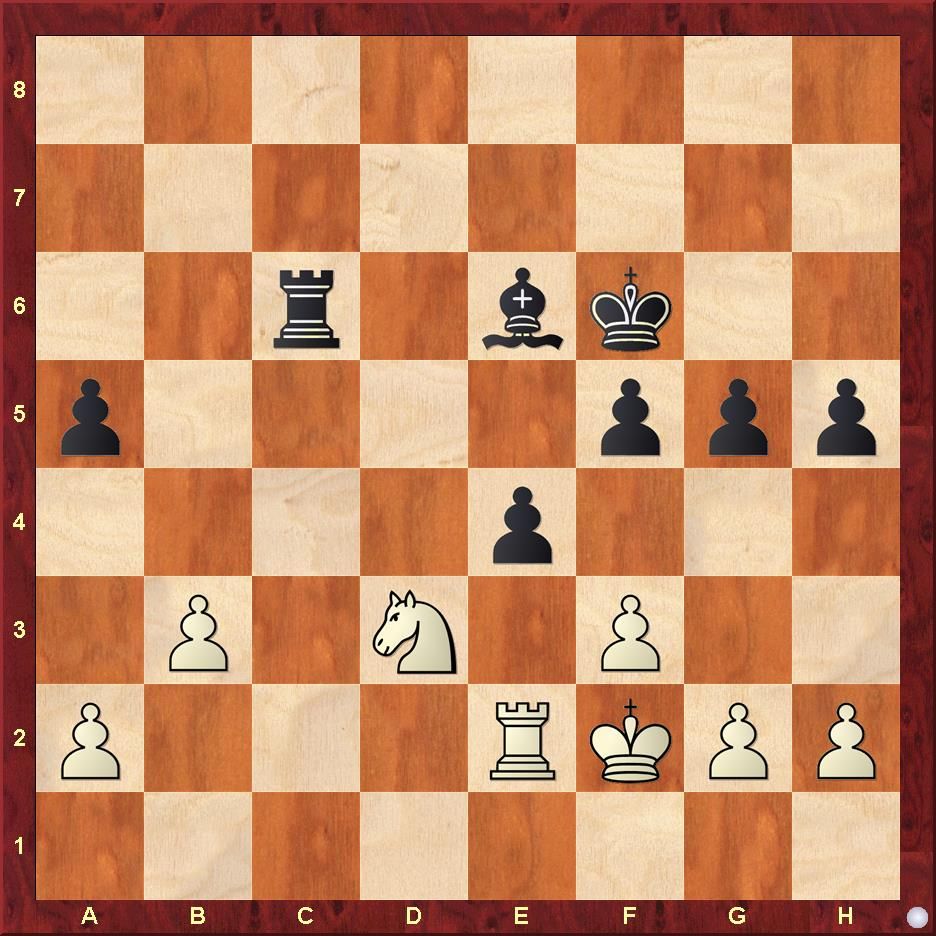 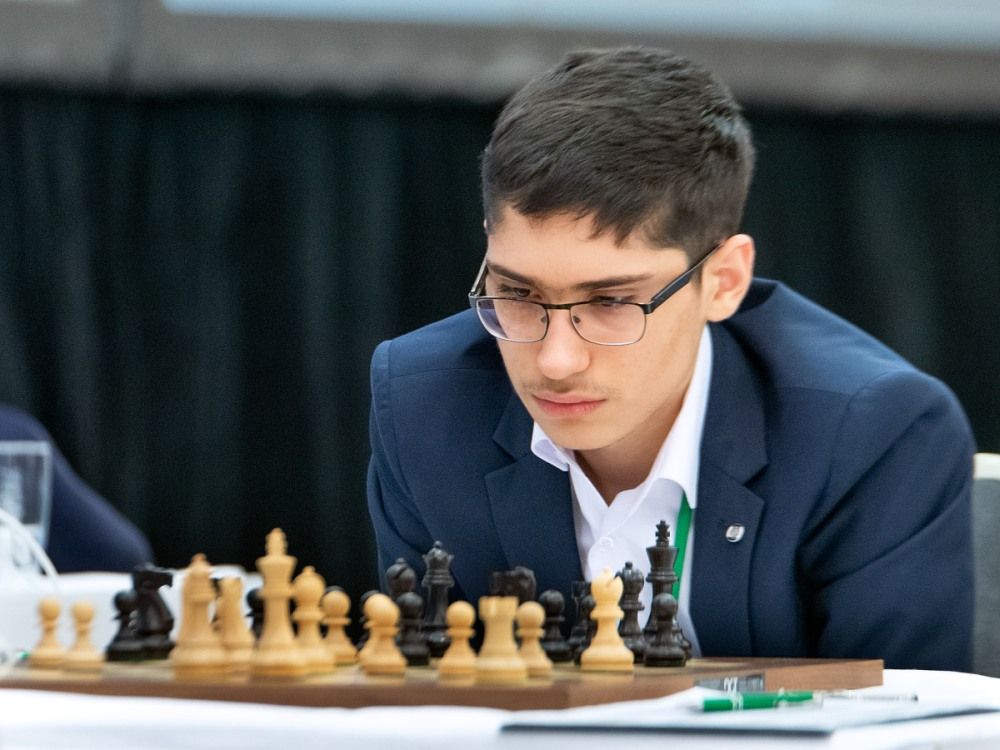 Congratulations to Alireza Firouzja for winning the Prague Masters 2020! He was not at his best, but won when it mattered most! | Photo: Prague Chess 2020 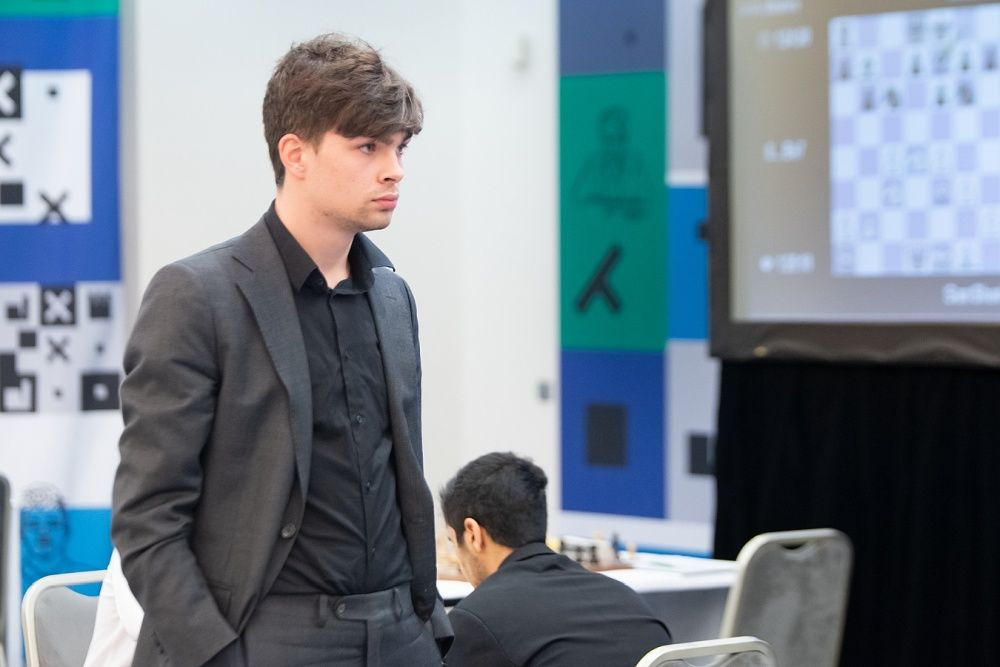 The challengers was bitterly fought to the end, but Jorden Van Foreest managed to win it outright with a nice win in the final round! He qualifies to the master section next year| Photo: Prague Chess 2020 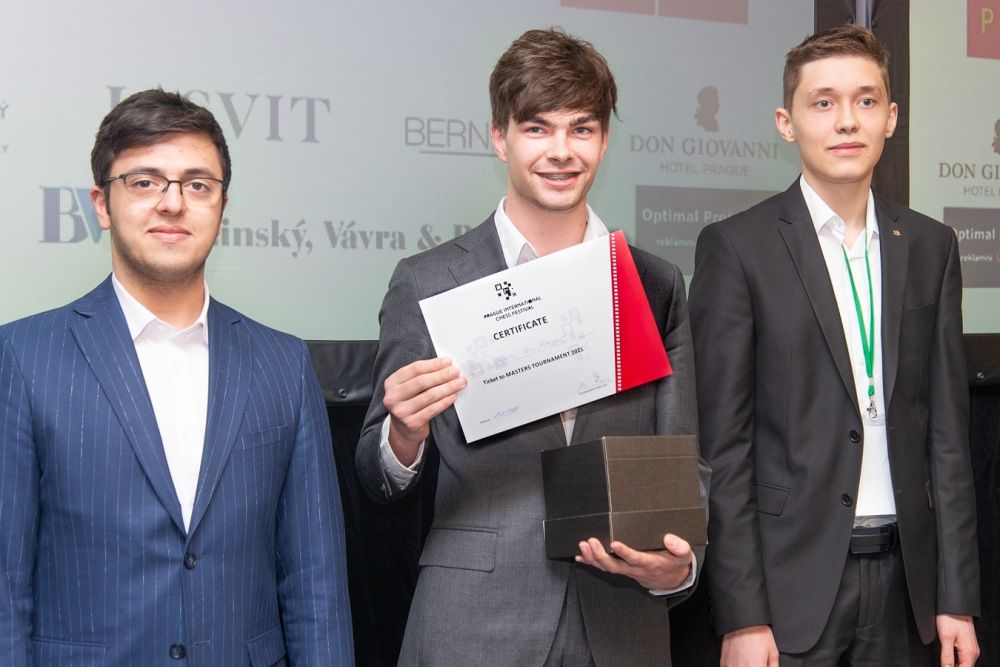 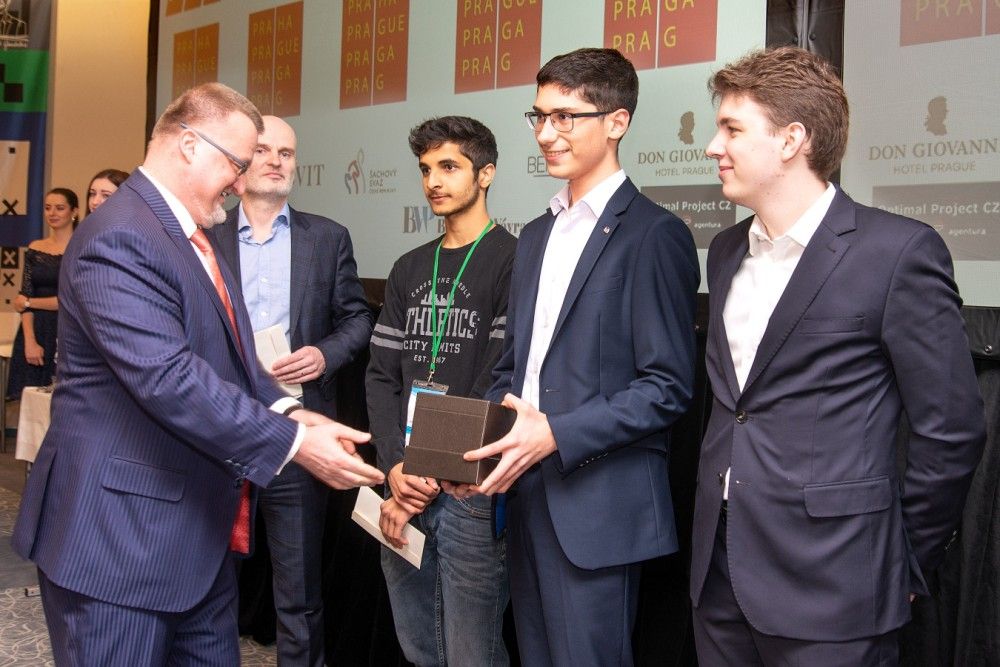 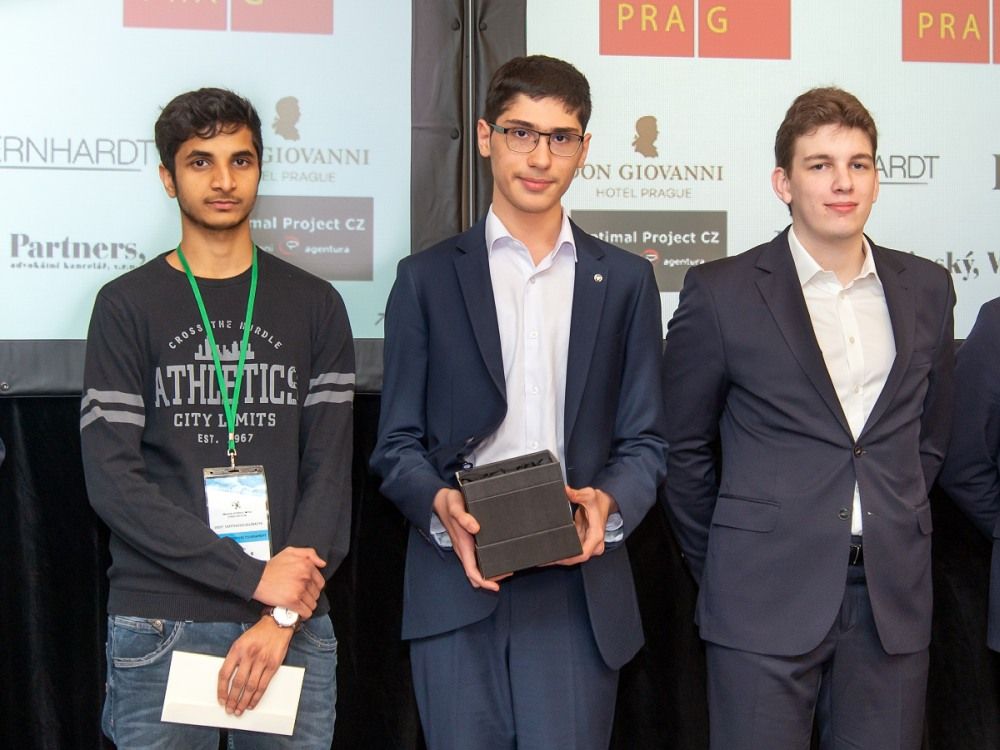 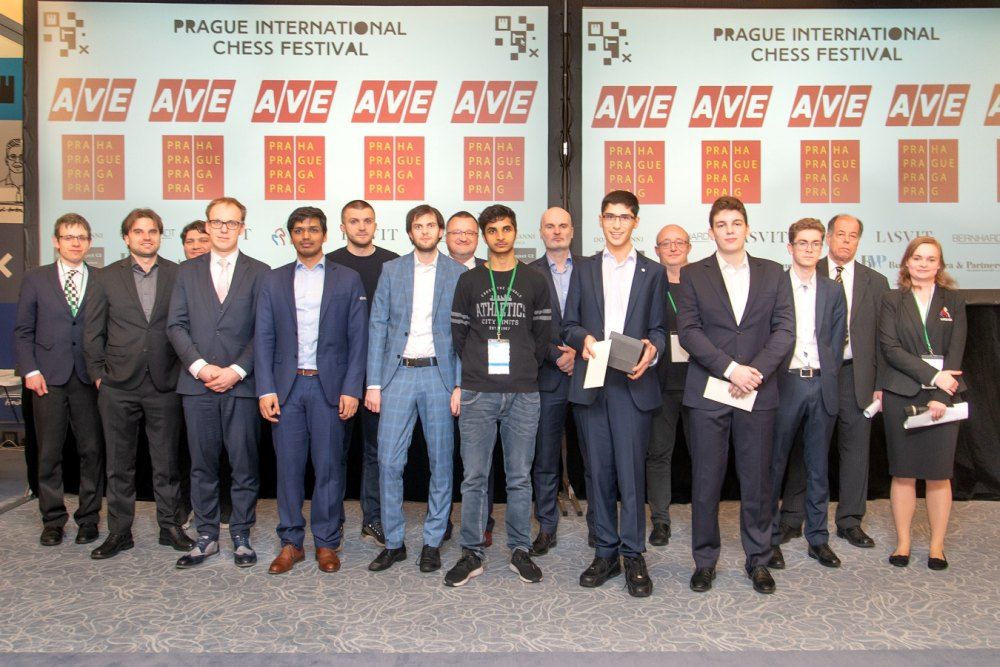 Thank you Prague for such a wonderful tournament! See you in 2021! | Photo: Prague Chess 2020
Related news: