Anish Giri delivered an instant classic against Abhijeet Gupta as the Dutch no.1 played his immortal game which will be talked for years to come in the second round of CoinDCX Chess Super League. Giri and Arpita scored important victories to ensure The Kingslayers score their first win of the event against Pivotal Pawns. Brutal Bishops drew with Quintessential Queens to emerge as the early sole leader. Ruthless Rooks bounced back from a first round loss, as they beat Krazy Knights 2-4. Radjabov, Karthikeyan and Anna Muzychuk scored the victories for Ruthless Rooks who is now at the second position in the points table. Round 3 starts today from 8:00 p.m. IST. Photo: Samay Raina live stream

Brutal Bishops seems to be the team to beat as they drew with Quintessential Queens to move to the top of table. Only Kosteniuk and Tarini suffered losses for the team, however the remaining team members ensured that Brutal Bishops remain undefeated as a team. 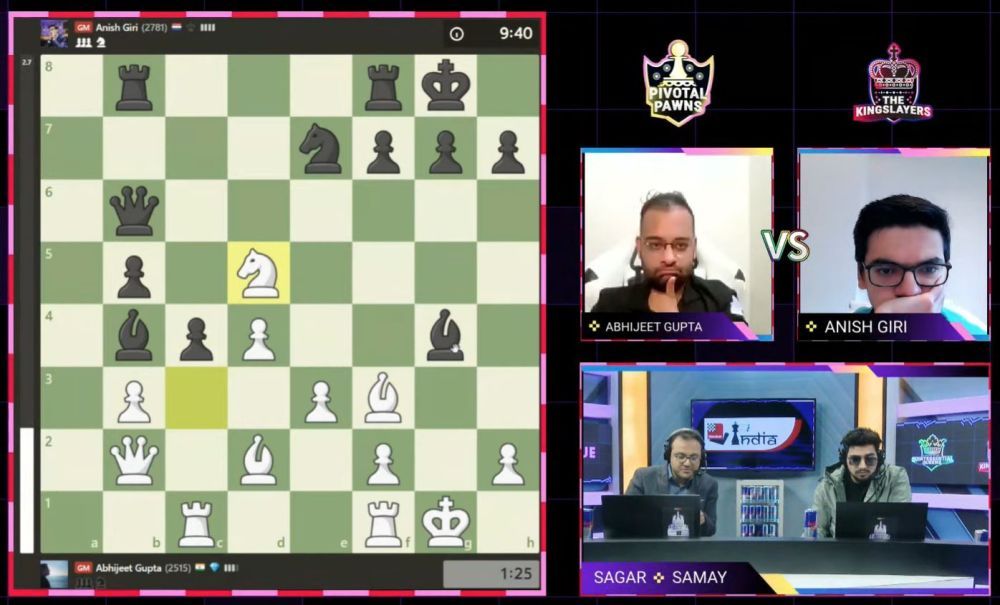 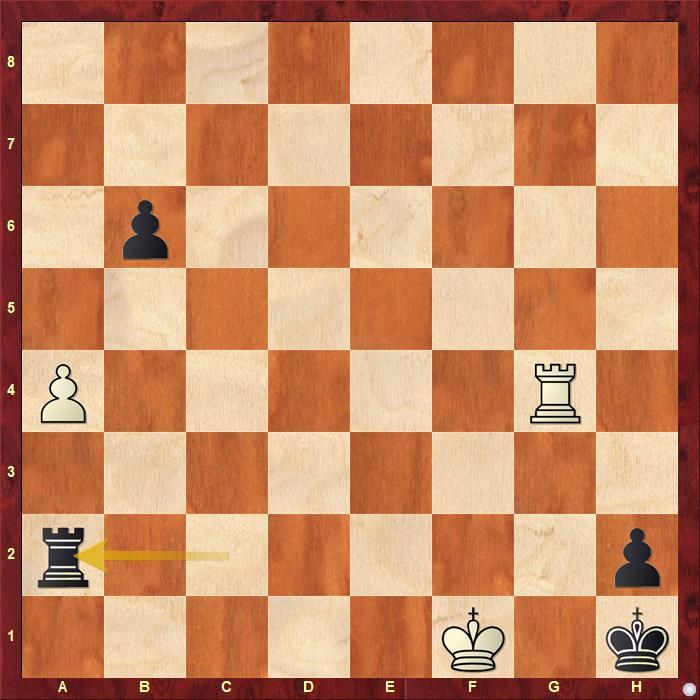 During time scramble, Humpy blundered in a completely drawn position 58.Rg6 and lost the game as 58...Rxa4 59.Rb6 Rf4+ 60.Ke2 Kg2 and now the pawn promotion is unstoppable. 58.Rb4 would have ended the game in a draw.

GM Yifan Hou (QQ) was once again in another battle with a former world champion, GM Alexandra Kosteniuk (BB). 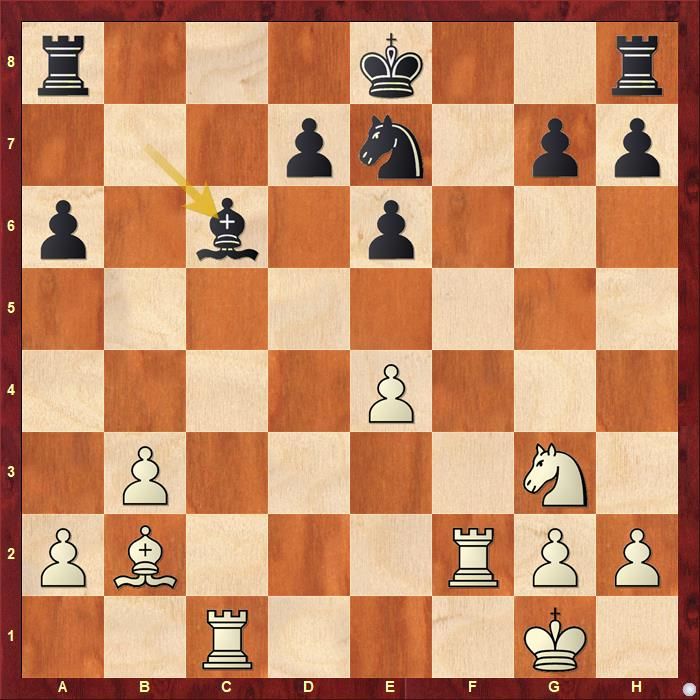 Deciding against defending the g7-pawn proved to be costly for Black eventually. 20.Bxg7 Rg8 21.Nh5 0-0-0 22.Rf7 and things completely turned into White's favor.

GM P Iniyan (QQ) lost one pawn too many against GM Raunak Sadhwani (BB). Eventually it cost him the game. 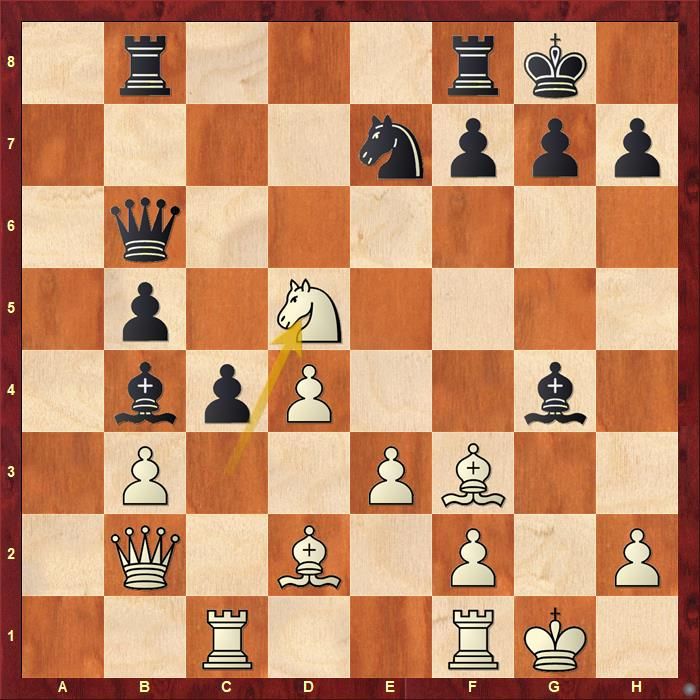 White already got himself in trouble when he played 18.g4. After 18...Nxg4 19.Nxg4 Bxg4 20.Nxd5, we get the above position and here is your chance to think like Giri and see if you can find the excellent continuation which he played.

GM Arjun Kalyan registered his second consecutive victory of the event as he defeated GM Gukesh in a 113-move long marathon game.

WIM Arpita Mukherjee got the better of WIM Savitha Shri B, after the latter trapped her own knight. 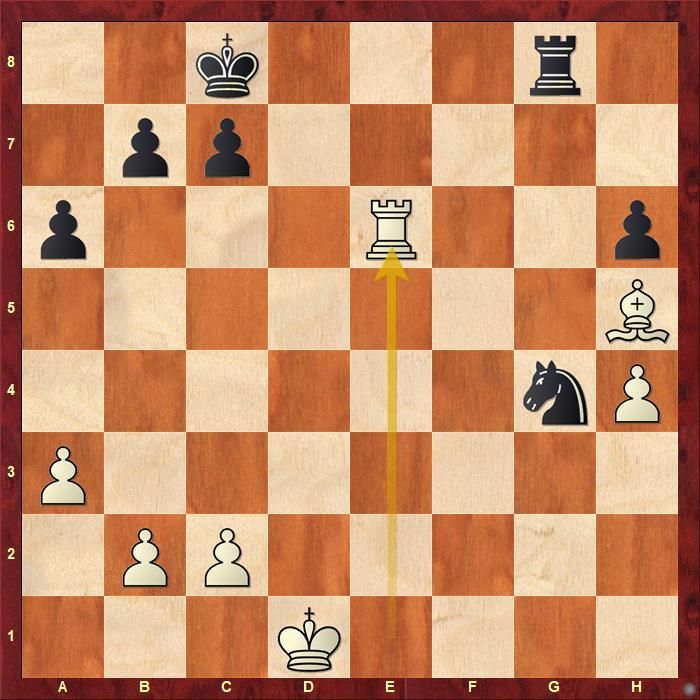 Black's knight is in a precarious position. However it does not get trapped if Black plays 26...Kd7. However, in the game Black blundered 26...Nf2+ and soon lost the game. 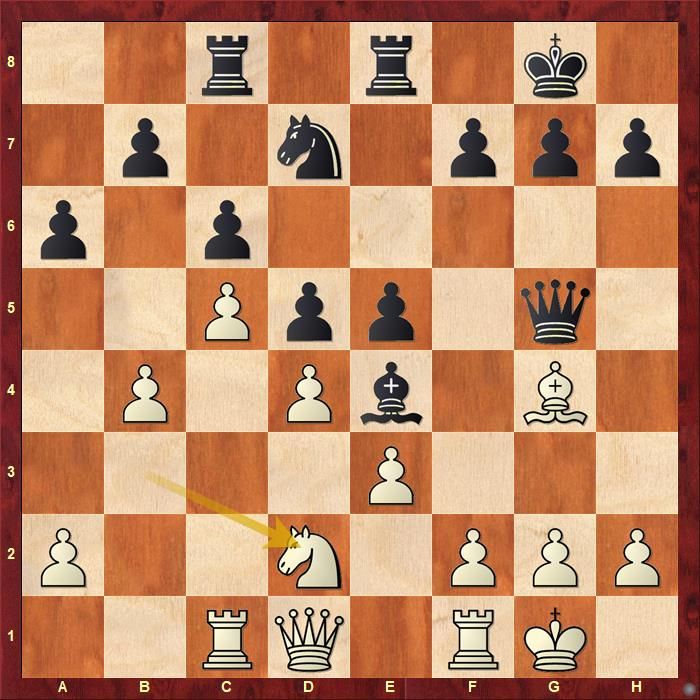 GM Karthikeyan Murali got the better of GM Krishnan Sasikiran, when the latter missed his opponent's threat completely.

WGM Mary Ann Gomes went wrong in the opening and could not get out of the gate against GM Anna Muzychuk. 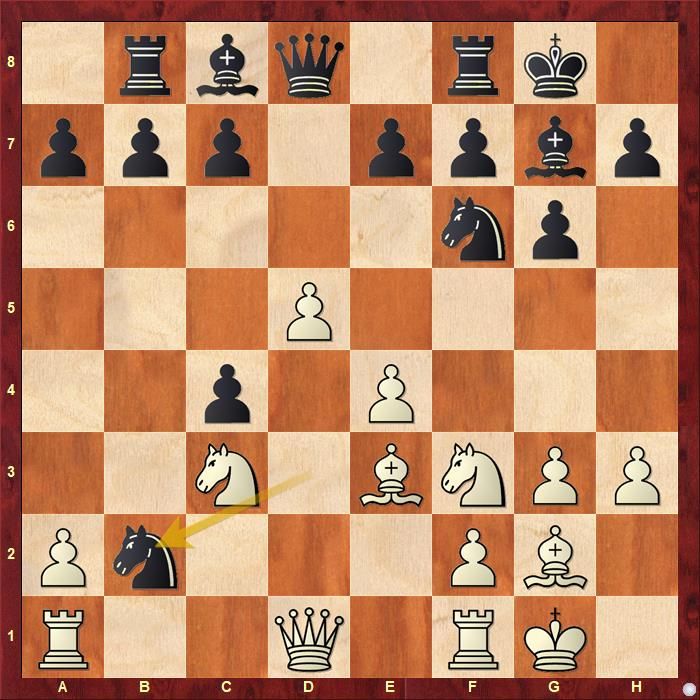 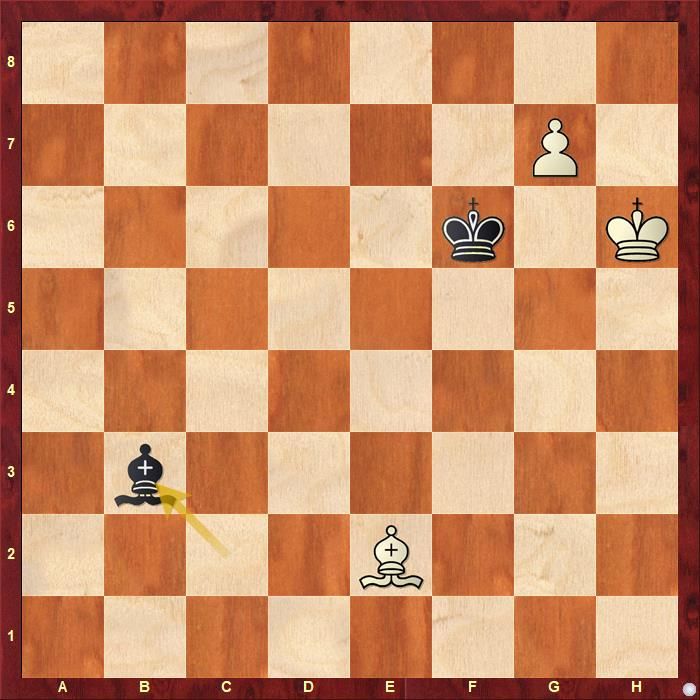 GM Aryan Chopra had the upper hand for the better part of the endgame against GM Harshit Raja. 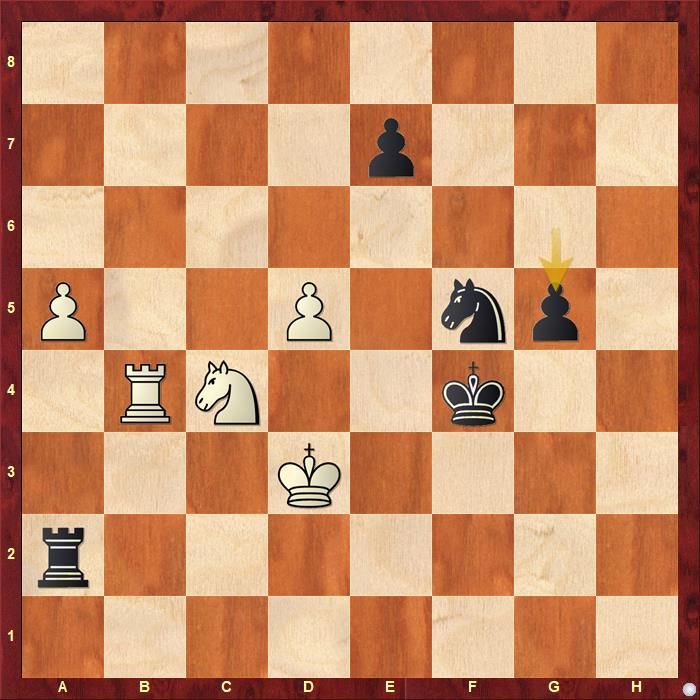 One of the best chance White had in the entire game was in the above position. Find out the winning continuation after 47...g5.

Here are a few interesting finishes of Round 2. 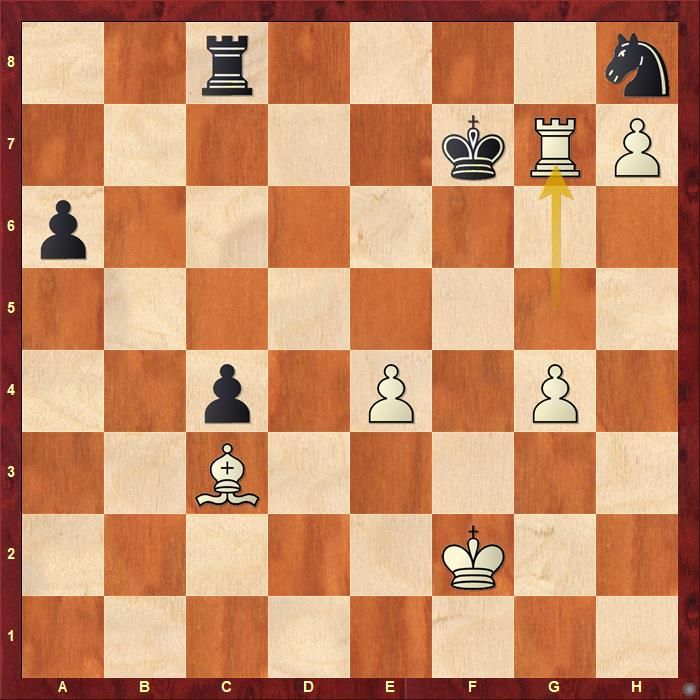 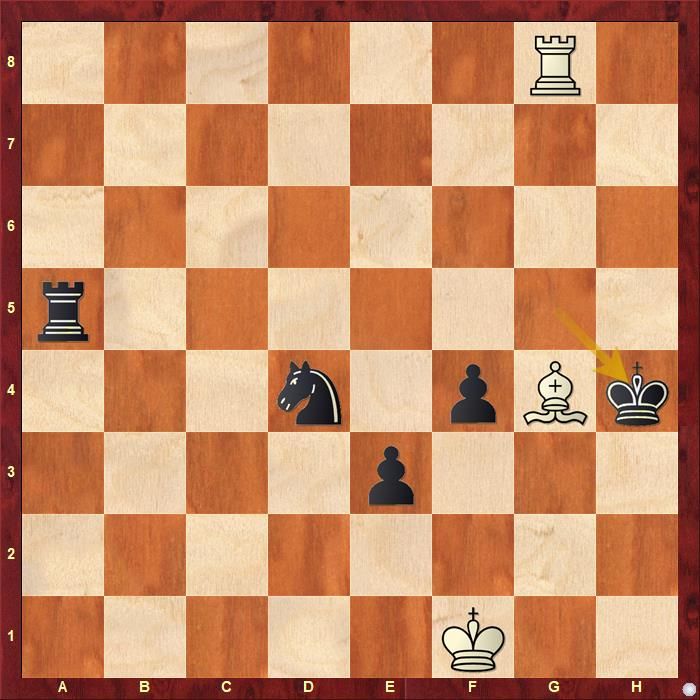 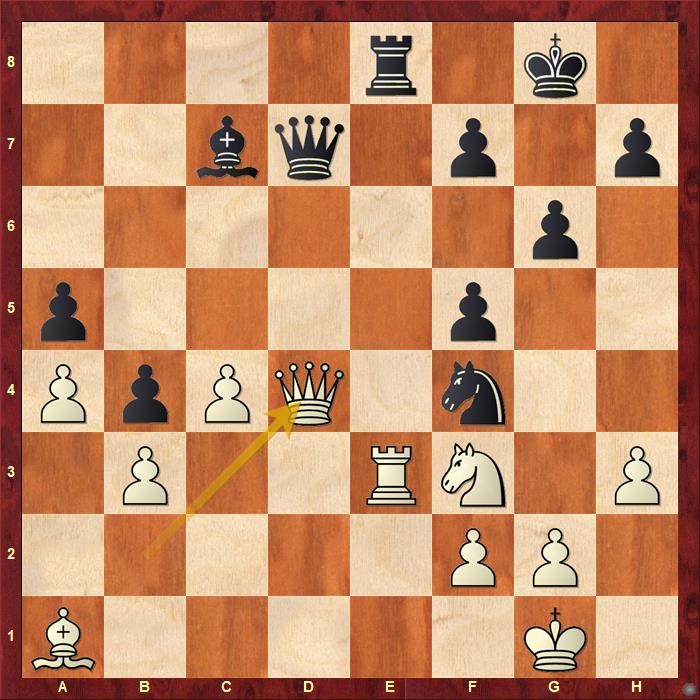