The consistency of Nihal Sarin

How many tournaments did you play from January 2018 until now? Somewhere between 10-15, right? Well, the 14-year-old Indian prodigy Nihal Sarin also played 13 classical events, But guess what? In none of them did he lose a single rating point! This is simply unbelievable. From January 2018 to April 2019, in the last16 months, Nihal played in some of the strongest open tournaments in the world like the Gibraltar Masters, Aeroflot Open, Isle of Man and many others and he gained 74 Elo points to get his rating from 2524 to 2598! Now, on the brink of 2600, Nihal will take part in the first strong Round Robin tournament of his career - Tepe Sigeman & Co Chess Tournament. beginning from the 3rd of May 2019. | Photo: David Llada.

Nihal Sarin became India's 53rd grandmaster on August 15th 2018 at the age of 14 years and one month. But he had already crossed the Elo of 2500 in December 2017. Of course, becoming a GM is one of the biggest milestones of a chess player's career, but once that is achieved, the focus shifts to your Elo rating. There are no more titles to achieve and the invitation to events often depends upon what your Elo rating is. We went through the tournaments that Nihal played in the year 2018 and found something quite unbelievable. He began the year with an Elo of 2524 and as on 1st of May 2019 when the new rating list will be published he would have an Elo of 2598! And guess what? He hasn't lost a single rating point in any of the tournaments in the past 16 months. Have a look at this table:

The above rating list doesn't count Nihal's phenomenal performance at the World Blitz Championships where he finished ahead of many strong players including Vishy Anand and stood 11th, gaining 151 Elo points. Nor does it take into consideration his performance at Tata Steel India rapid event where Nihal drew against Anand, Harikrishna, Mamedyarov, Vidit, Karjakin and Ganguly. We are just talking about classical chess for now.

Those are some world class tournaments up there. Gibraltar, Aeroflot, Reykjavik, Abu Dhabi, Isle of Man, Sunway Sitges, Sharjah etc. Nihal scored his first GM norm at the Fagernes International in 2017. He scored his second GM norm at the Reykjavik Open 2018 and his third GM norm at Abu Dhabi Masters 2018 to become a GM. Nihal had a whopping 192 Elo points gain in the year 2017 to cross 2500 on the rating list. When a youngster has such a huge jump, it usually takes time for him to settle down to a specific rating level. But Nihal has just kept moving forward. This also shows that he has been constantly evolving as a player and his style has improved so as to sustain against some of the best players in the world. 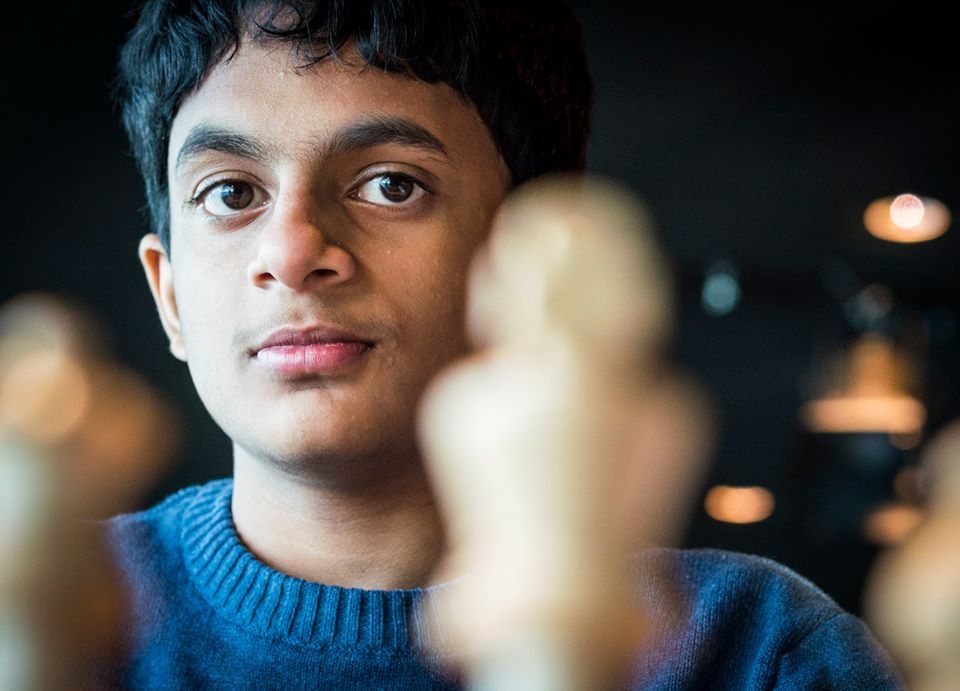 Nihal at the Reykjavik Open 2018 where he scored his second GM norm with two rounds to spare! | Photo: Lennart Ootes

* Nihal has played 115 classical games with 42 wins, 56 draws and 17 losses.
* He faced nine players above the rating of 2700. The youngster managed to hold six of his opponents to a draw - Wesley So, Cheparinov, Fedoseev (twice), Dubov and Rapport.
* When it comes to 2600 GMs, Nihal already has six wins. They include Hammer, Parligras, twice against Adly Ahmed, Aleksandar Indjic and Kiril Georgiev.
* While Nihal has fared well against higher rated opponents, against players who are rated lower than him he has been absolutely brutal. Against opponents who were rated between 2000 to 2400 Nihal has played 34 games and has won 24, drawn 7 and lost 3. 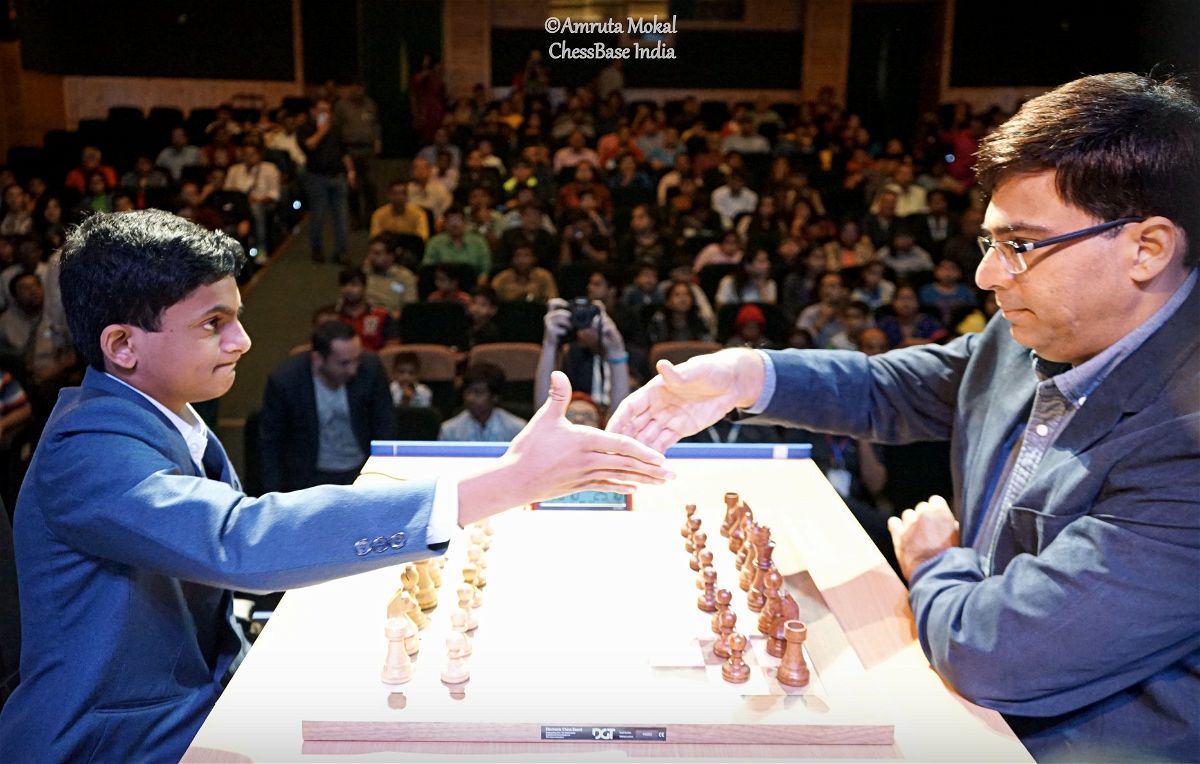 After the Sharjah Masters 2019 where Nihal gained nine Elo points, we decided to have an interview with Nihal. He was at his home in Thrissur while I was in the ChessBase India office in Mumbai. You should go over the video below to get a feel of this amazing talent, the way he thinks, analyzes and how he is completely focused towards chess.

The nice thing in this video is that we not only analyze Nihal's wins but also his one loss from the tournament. It shows how objective the youngster is and also the fact that he is ready to work on his weaknesses and become a stronger player.

One shocking revelation (at least for myself) in the interview was the fact that Nihal didn't spend any real time in analyzing his games played at a tournament. He comes back from the game, checks his game with an engine to see whether he had calculated accurately or not and that is all. He doesn't look at it again to try and learn from his mistakes. Rather than analyzing his games, he would prefer playing blitz online. Well known experts like Nimzowitsch, Botvinnik, Karpov, Kasparov and others have always emphasized on the importance of analyzing your own games. But Nihal has his own preferences and has never adhered to well laid down rules. That's the reason why in spite of doing everything different from what the great masters of the past mentioned, Nihal still is able to taste success. He just enjoys playing chess and works on it in his own special way.

Nihal's next tournament is the Tepe Sigeman & Co. in Sweden which begins from the 3rd of May. This is how the field looks like:

Being the second last seed, this is going to be a big challenge for Nihal. But this is also a chance for him to prove that he really belongs right up there. This is his first strong Round Robin tournament of his career and we will be following his games with great enthusiasm! With two more points to get to reach 2600, the entire nation is cheering for the 14-year-old youngster! You can check the official website of the event for more details.

Coverage of Nihal on ChessBase India:

ChessBase India began in January 2016. At that point Nihal's rating was 2216. Now he is 2598! It has been an absolute pleasure to follow his journey.

This is the first video of Nihal ever captured - It was taken in 2014 World Juniors and was entitled as the "Boy who never sits!" Subsequently this title has stuck to Nihal over the years!
Nihal Sarin's first interview in the commentary room of World Juniors 2014
We can tell you this - A world top 10 ranked GM asked us before his crucial game, "This video of Nihal Sarin is fake, right? How can someone solve so quickly!"
Nihal Sarin decimates Evgeny Postny in blitz!
One of Nihal's detailed interviews at the World Youth 2017
How good is Nihal Sarin? This video reveals his level of play
Nihal launches a thrilling mating attack against 2479 rated Aryan Gholami
Nihal on his secret of not sitting on the board!
Nihal's interview at the Kolkata GM in May 2018
This video contains knowledge gained over years of experience and can be useful for all chess parents. High quality stuff by Dr. Sarin!
Interview with Dr. Shijin, Nihal's mother
Nihal raised nearly 1,75,000 for the flood victims of Kerala
Nihal Sarin versus Vishy Anand ( full game)
Analyzing Nihal's performance at the Tata Steel Chess India 2018 in Kolkata
Interview with Nihal and Pragg after Sunway Sitges 2018

When chess becomes a language

For India's 53rd GM Nihal Sarin, the journey is more important than destination