Debarshi Mukherjee scored 8.5/10 and won 56th West Bengal State Open Championship 2018. Thus qualifying for the upcoming National Open Senior Championship 2018. Defending champion Neelash Saha scored 7.5/10 and secured 2nd position. He drew with the eventual champion of the tournament in the last round. Gopal Chandra Biswas made a strong comeback in this tournament, scored 7.5/10 and secured 3rd position due to a better tie-break score. In this report, we bring you photos from the tournament. Photo: Swati Biswas

Due to the number of tournaments getting increased so much these days that it allows a player to pick and choose which one they wish to play. The tournament clashing with Goa GM tournament and festivities around the corner resulted in low number of participants. A few years 160 participants would mean a lot for a State championship but these days it's just a meagre number. 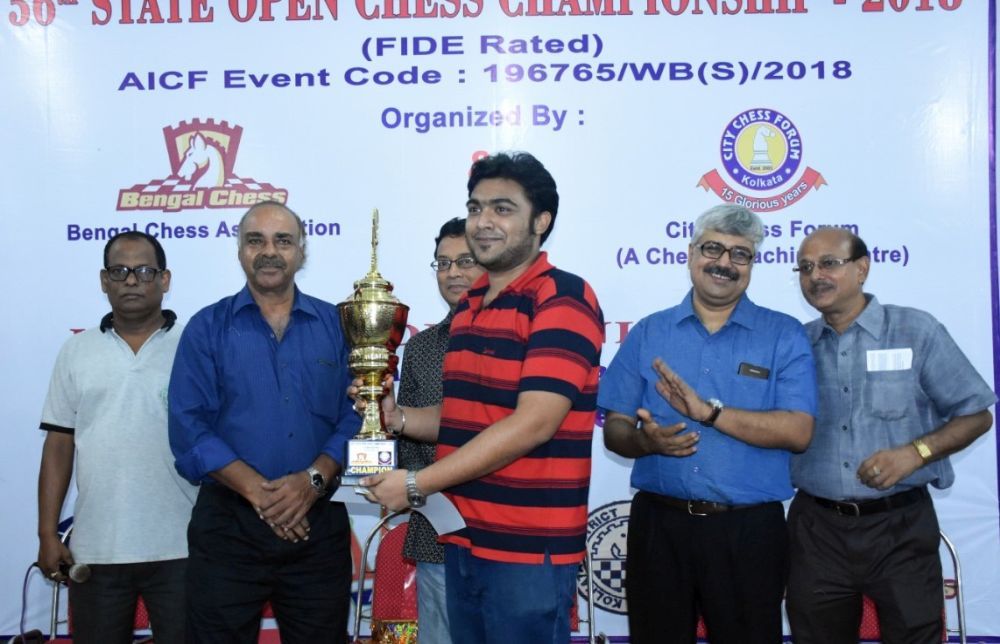 Two IM-norm holder, Debarshi Mukherjee headed into the final round with a full one point lead over five other players at 7.0/9. A draw in the last round guaranteed him a championship, well a loss would mean the defending champion Neelash Saha winning for the second year in a row. Debarshi managed to hold a draw and secure his first State title. 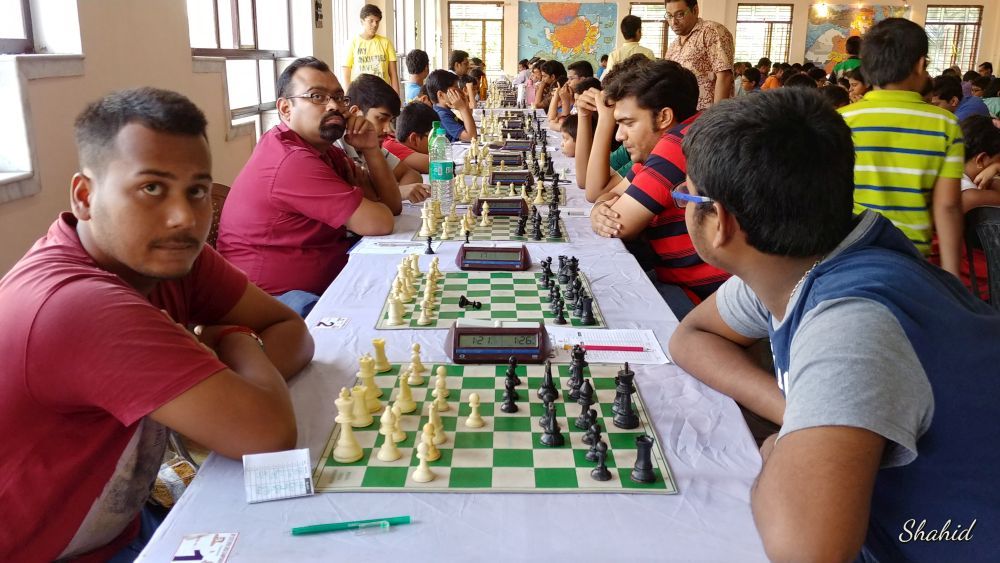 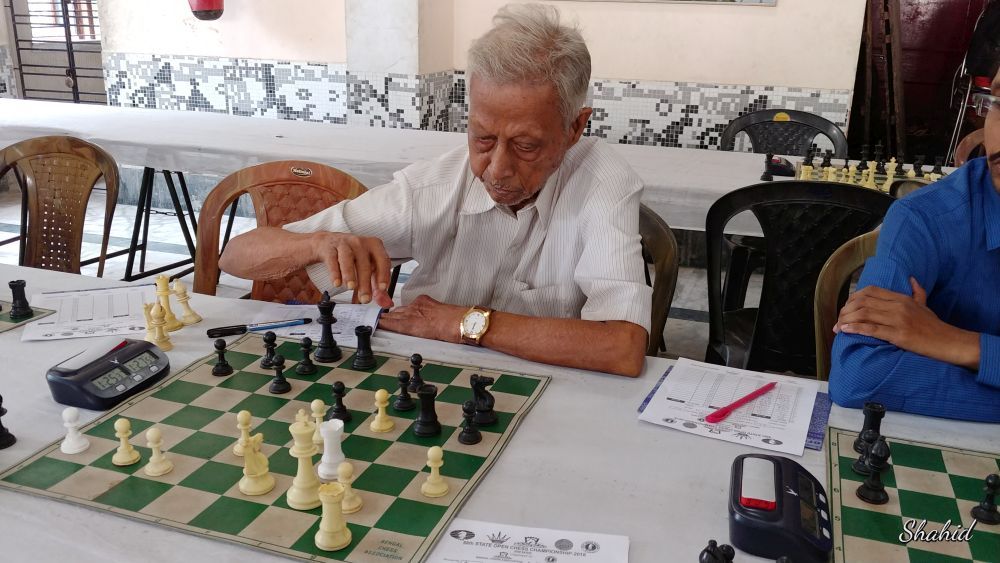 89-year old Madhu Sudan Mukherjee is the oldest active player in the state and perhaps the country. He scored 4.0/10 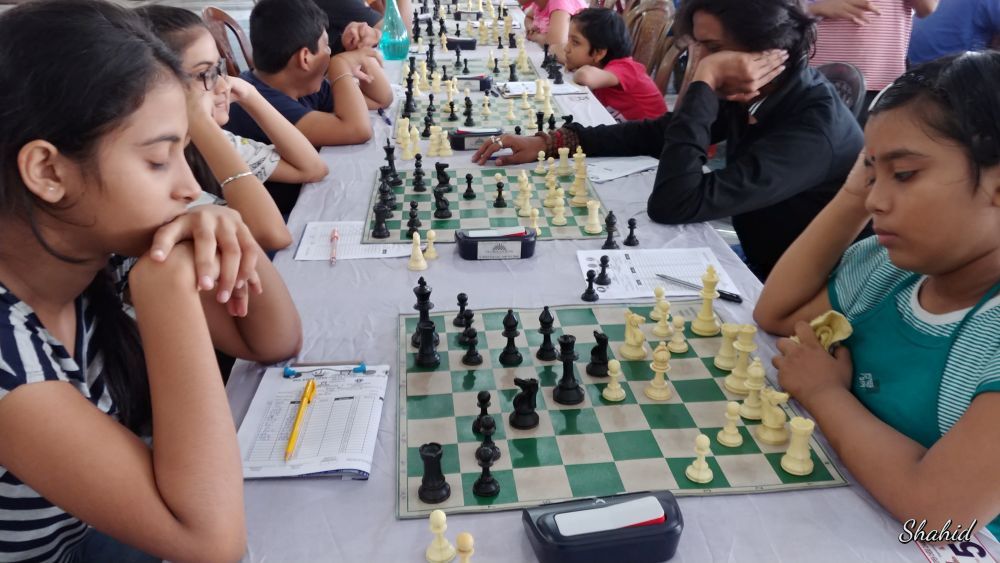 The tournament witnessed the participation of 24 women players 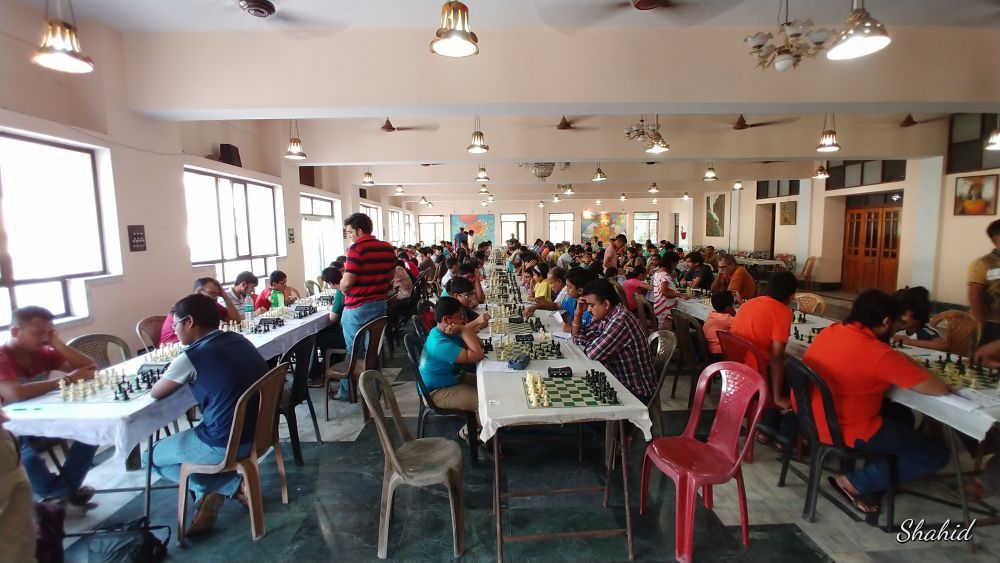 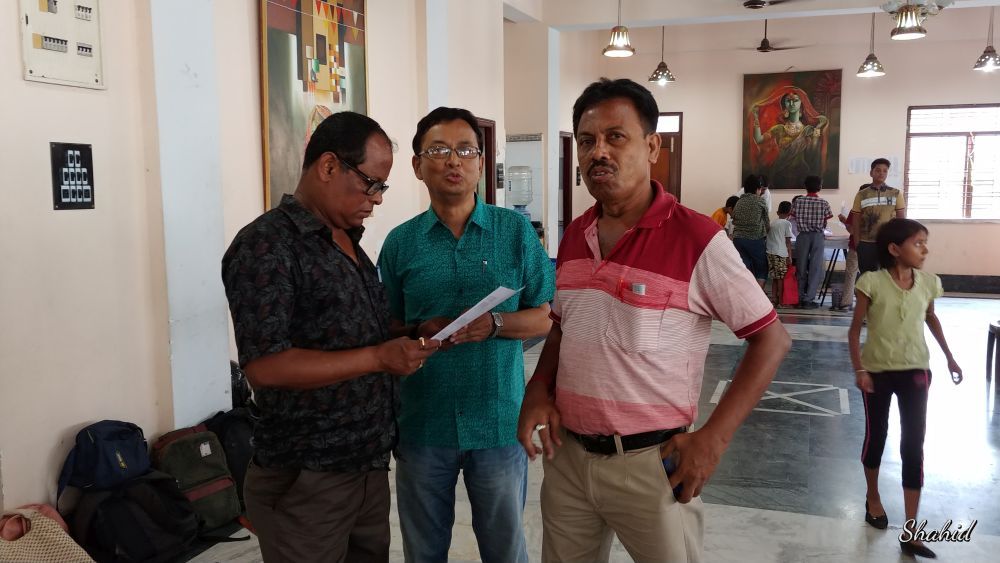 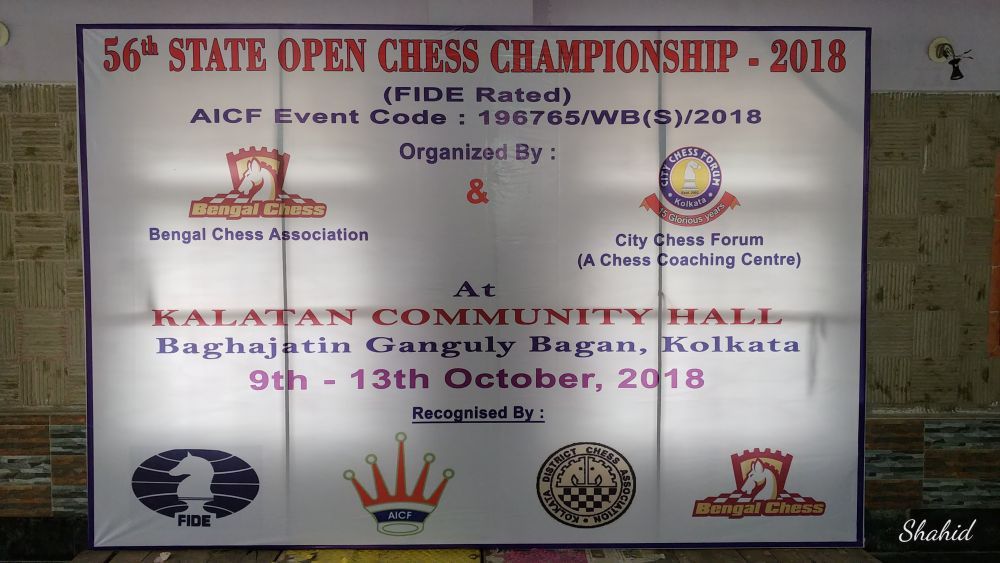 Tournament flex
Round 1 starting moments of top 10 board 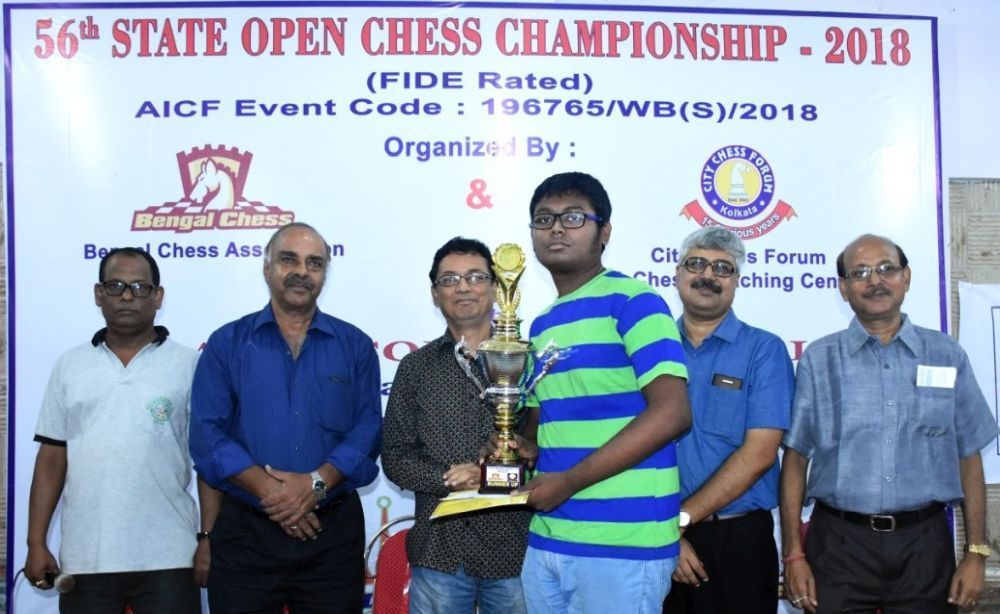 Neelash Saha scored 7.5/10 and due to a better tie-break score secured 2nd position. He got a trophy and ₹15000 cash | Photo: Swati Biswas 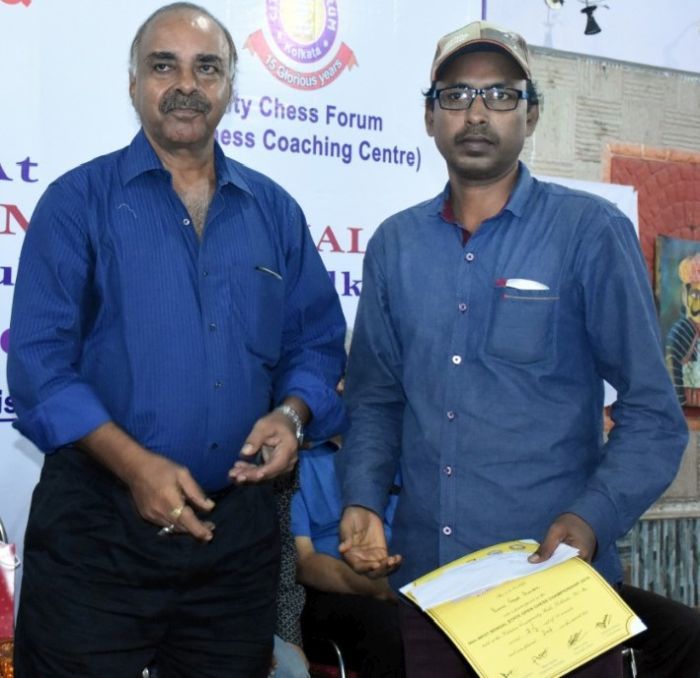 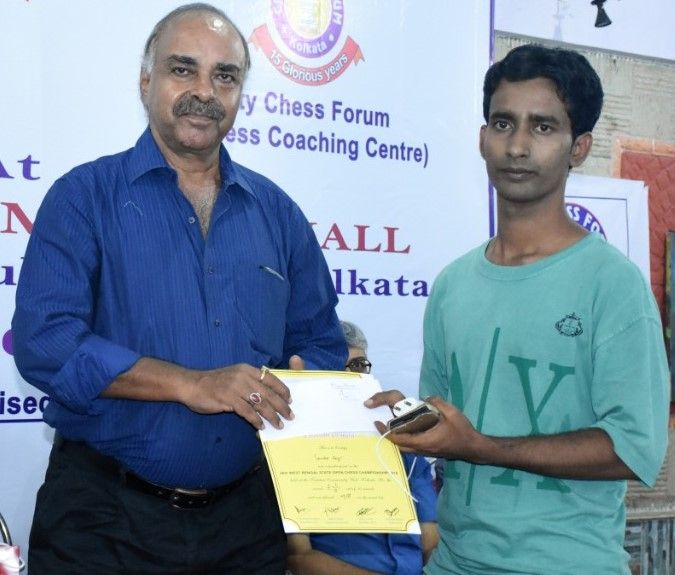 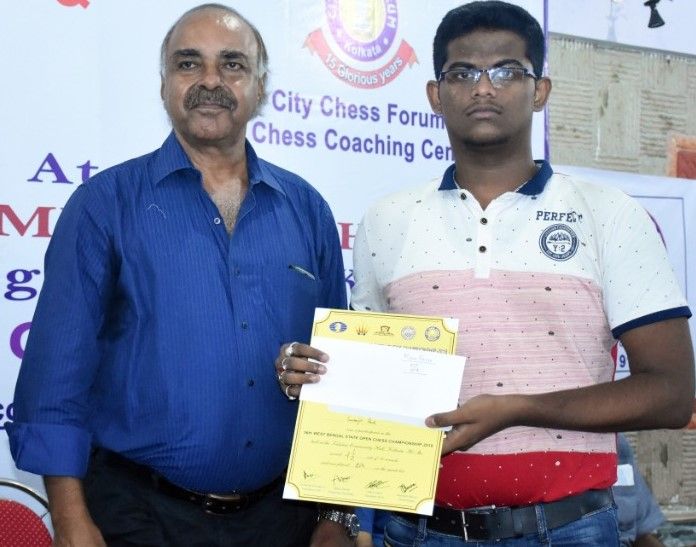 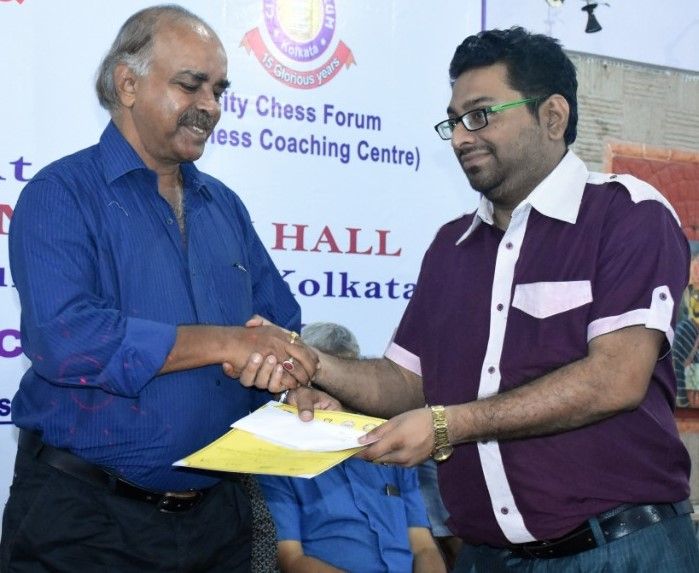 Niladri Sekhar Bhattacharya, professional trainer, maintained his seeding and finished at 7th position with a score of 7.5/10. He got ₹4000 cash | Photo: Swati Biswas 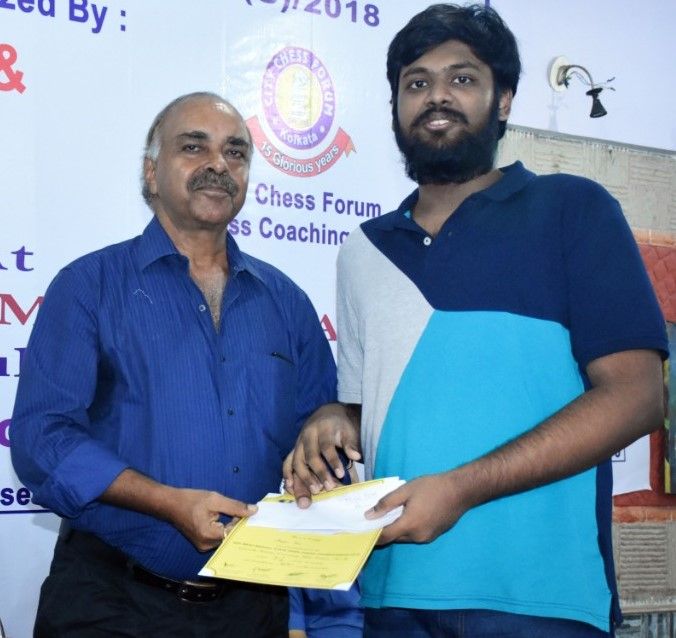 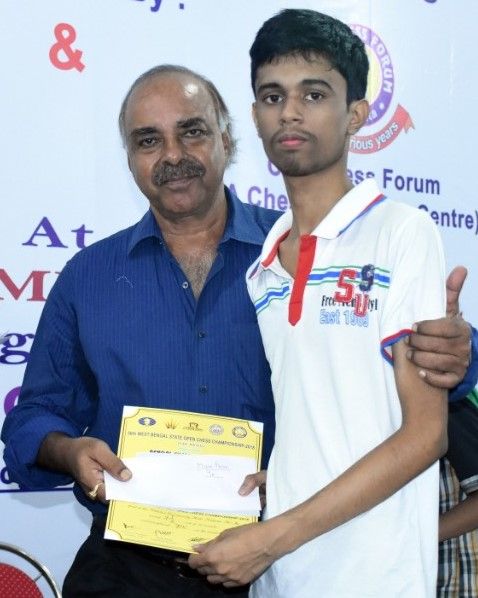 Kaustuv Kundu's woes continued as he scored 7.5/10 and finished at 9th position. He got ₹2500 cash | Photo: Swati Biswas 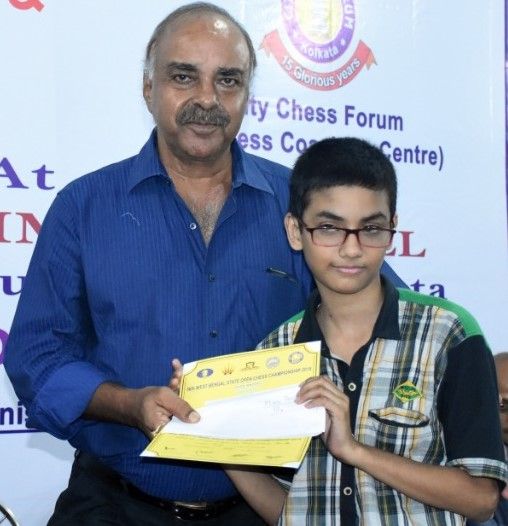 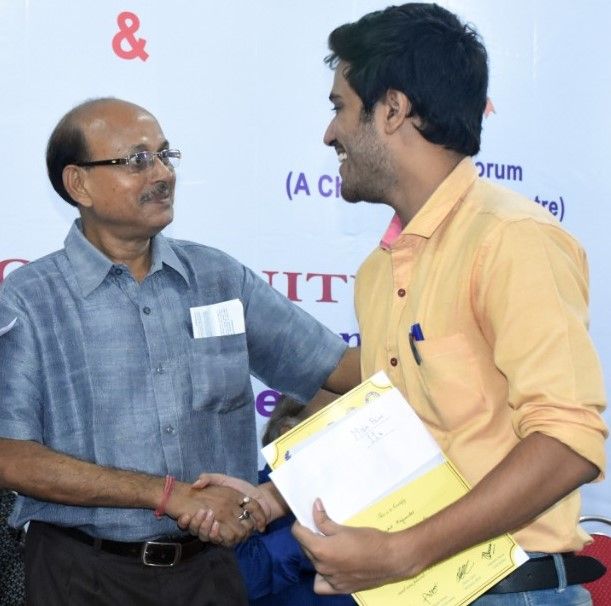 Parikshit Majumder scored 7.0/10, increased 57 rating points and due to a better tie-break score he finished at 11th position. He got ₹1500 cash | Photo: Swati Biswas 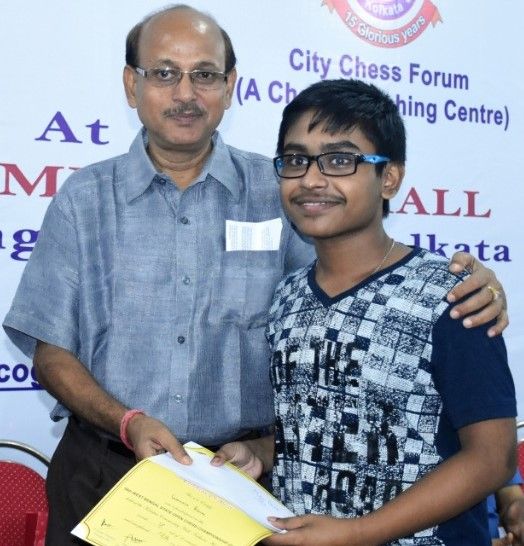 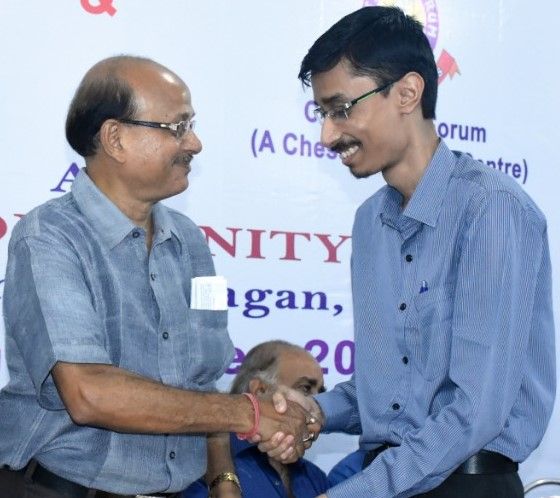 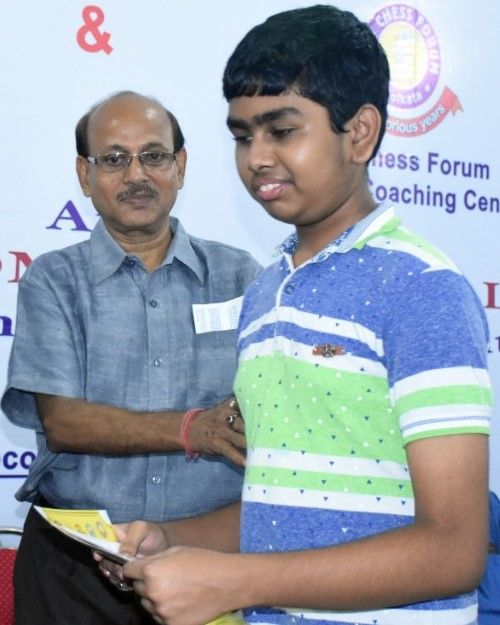 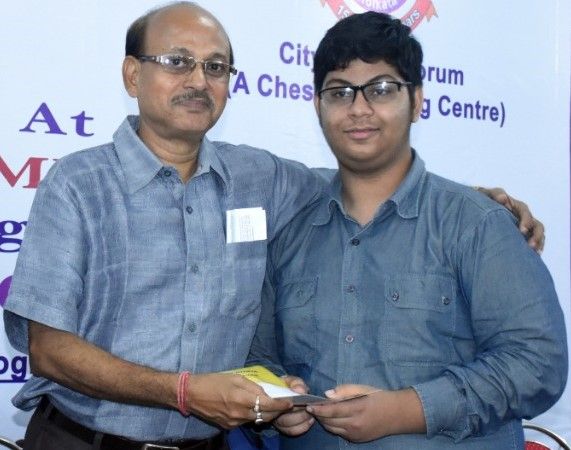 A short interview with the champion:

Shahid Ahmed (SA): Congratulations for winning 56th West Bengal State Open. How does it feel to become champion for the very first time?

Debarshi Mukherjee (DM): I am very happy to be the 56th State Champion. Senior State championship has always held a special place compared to any other tournament in West Bengal. Yes this is my first although I had won a national selection tournament previously.

SA: What is the reason behind your triumph?

DM: I was a bit lucky but I was very motivated to win this event. Roktim Bandyopadhyay is my coach. Aagard and Dvoretsky's books helped me a lot.

SA: What was the last championship you have won?

DM: I won a Rapid event just two days before the Senior State Championship and the DBCA rating event in Dec 2016

SA: Whom will you give credit for your success?

DM: My mother and my coach.

SA: How difficult/easy is to balance your work and chess?

DM: It is getting very difficult for me to manage both. There are no special leave for tournaments.

SA: What is your aim in chess?

DM: Getting International Master title is my immediate aim.

SA: What are the next tournaments you are planning to play?

DM: I will be playing in Dhaka

SA: Tata Steel India 2018 Super GM tournament is taking place in your hometown Kolkata in a few days. How excited are you about it? Whom are you looking forward to see live in action?

DM: I am very excited and I will be looking forward to seeing the world's best in action. I have never seen them play live so it's a huge thing for me to watch each and every one of them playing.

The tournament was organized by Bengal Chess Association and City Chess Forum from 9th-13th October 2018 at Kalatan Community Hall in Kolkata. The tournament witnessed the participation of 160 players from various districts of West Bengal.

Final standings after round 10