After catching up in the tournament lead in the previous round, Vignesh NR scored another big win in round 9 of the 1st Gujarat International Grandmaster Open. In the penultimate round, Vignesh defeated Vitaly Sivuk of Ukraine. And since Stany lost on the top board against Alexandr Predke, he is the sole leader of the tournament. Tomorrow Vignesh will take on the tournament's top seed, GM Martyn Kravtsiv. Meanwhile, Michelle Catherina scored a win over Rahul Srivasthav to keep her chance of a WGM norm alive. She will have to win in the final round to earn her norm, however. Also, 18-year-old Jeet Jain managed to bring down veteran GM Pravin Thipsay after the latter made a tactical error in the middle game. We have an illustrated report on all the happenings.

One leader and three chasers

Going into the ninth round, Vignesh NR had beaten Stany GA to join the latter in tournament lead. In the penultimate round, Stany lost again to Alexandr Predke of Russia, leaving Vignesh in sole lead.

Since the past couple of rounds, Stany has been struggling with his form. In the previous round, too, he had just blundered in the opening and given Vignesh the game on a platter. This time again, Stany made some precarious pawn moves in the early stages of the game and got in trouble. 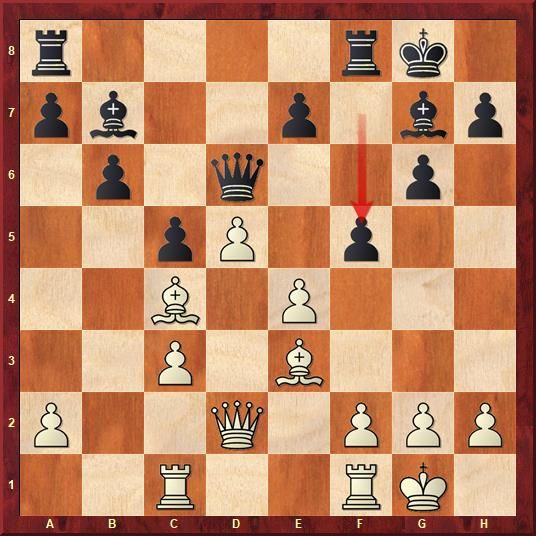 In an Exchange Gruenfeld, Stany sought to undermine White's pawn centre with the move 16…f5. With a white bishop on c4, this looked rather dubious. Predke exploited this by trying to break the blockade on d6 with 17.Bf4. The game continued 17…Be5 18.Bxe5 Qxe5 19.exf5 Qxf5 20. Rce1 Rad8 before white finally got in 21.d6. 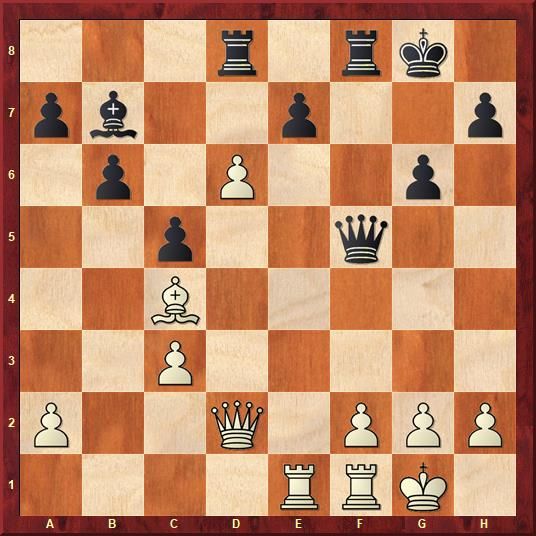 Black was utterly lost by this point. Predke also made a few errors in mopping up but his advantage was too big to dissipate in an instant. Exchanging all pieces, the Russian GM forced resignation by entering a pawn endgame where black had no chance of survival. 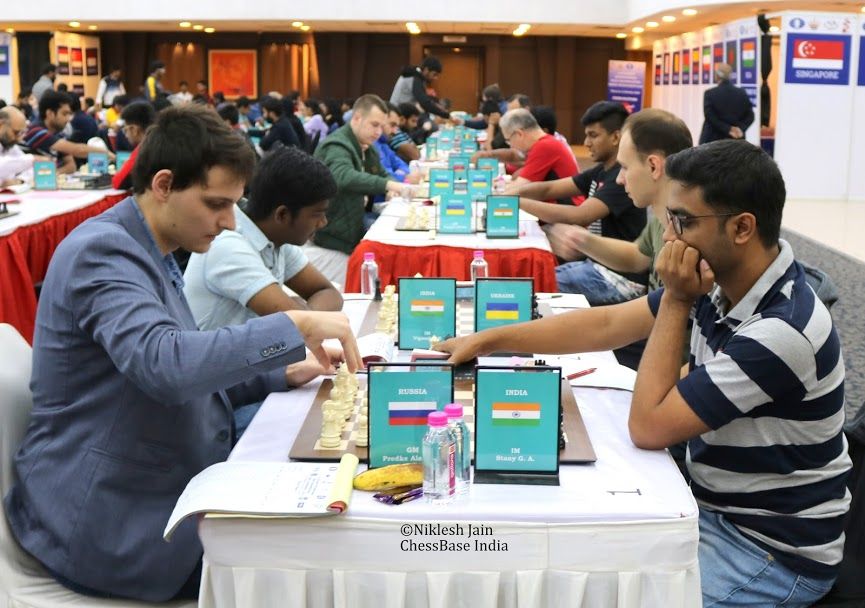 After Stany’s loss, all eyes were on the board 2 where the second co-leader of the tournament, IM Vignesh NR, had the white pieces against Vitaly Sivuk of Ukraine. Sivuk had the black pieces in the game and went for the Dragon variation of the Sicilian Defence, an opening that isn’t seen so often in Grandmaster games lately. 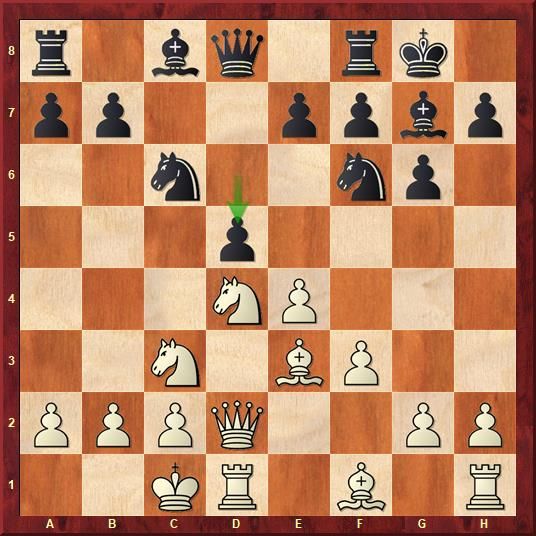 In the game, white avoided going into the lines starting with 9.Bc4 and allowed his opponent the central pawn break, 9.d5. After this, the game liquidated into an endgame, rather quickly. Vignesh had a slight advantage in the ensuing position due to black’s clumsily placed pawns. White’s own pawns weren’t in the best shape either but back had no means of organizing an attack on them. 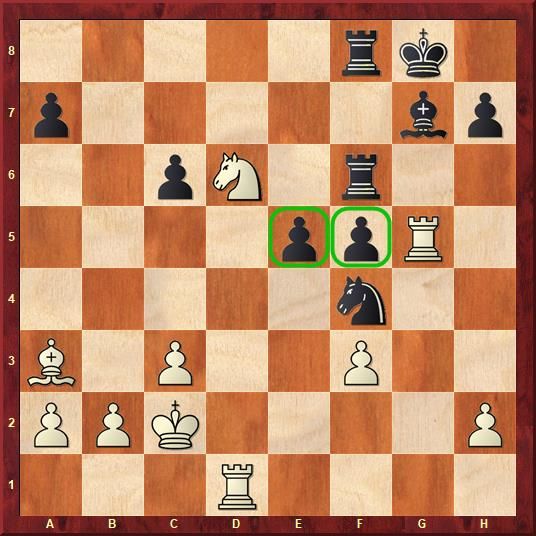 By the 40th move, Vignesh managed to exchange a pair of rooks and pocket the c6 pawn. Black’s position had begun to look lost by this point. All of his pawns were weak and isolated and the white rook, which had landed on the seventh rank of the board looked poised to harvest them all. Towards the end of the game, Vignesh found a nice tactical nuance to exchange rooks and won a third pawn in the process. Sivuk decided to throw in the towel by this point. 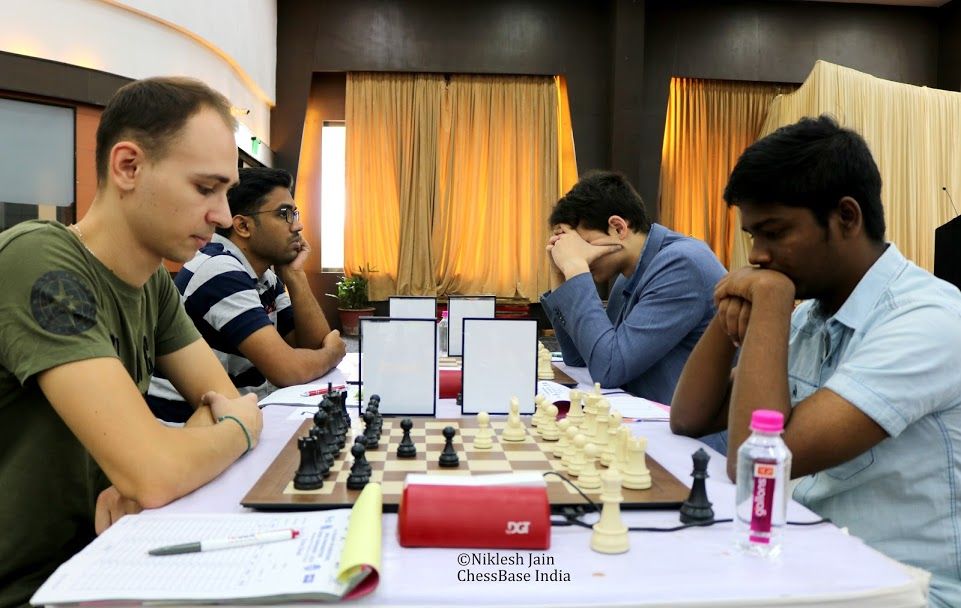 Vignesh's win over Vitaly Sivuk has placed him clear first on the leaderboard | Photo: Niklesh Jain

India’s latest Grandmaster, Harsha Bharathakoti was also in the run for the title but his loss against the top-seeded Martyn Kravtsiv in this round put an end to his chances. Perhaps inspired by Sivuk’s opening on board two, Harsha went for the Sicilian Dragon’s first cousin, the Pirc Defence.

Despite Harsha’s sharp opening choice, the game drifted into calmer waters as queens were traded off as early as on move 10. More pieces were exchanged in the next few moves and at the end of the sequence, Harsha’s position began to look slightly inferior. The problem was that while other pieces were exchanged, Harsha’s king’s rook had remained on its home square and now remained stuck there. 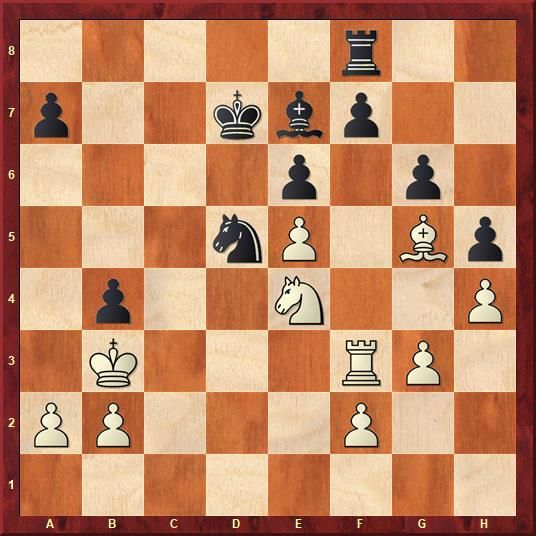 Also, Kravtsiv kept constant pressure black’s f7 pawn and ensured that the rook remained stuck to its defence. While the black forces remained stymied on the kingside, Kravtsiv marched his king to the other side of the board and won a pawn by the 35th move. The rest wasn’t difficult for the top-seeded GM. He simply rolled his queenside passers up the board to force resignation in the next 10 moves. 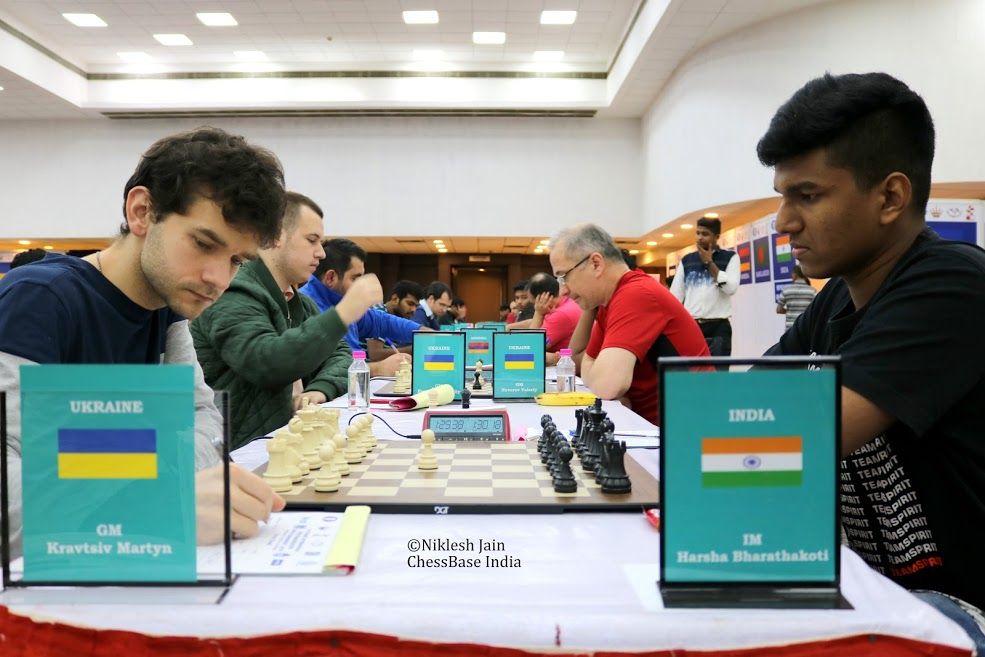 A loss against Martyn Kravtsiv has put Harsha Bharathakoti out of title contention | Photo: Niklesh Jain

Yesterday, Michelle Catherina P had an extra exchange in her game against Alexandr Predke but had failed to convert. Today again, the WIM from Tamil Nadu had the same material advantage over IM Rahul Srivasthav and this time she made no mistake. Having scored 5.5 points so far, she has mustered up a rating performance of 2302. If she manages to win her final round game, she will be completing a 10 round WGM norm. 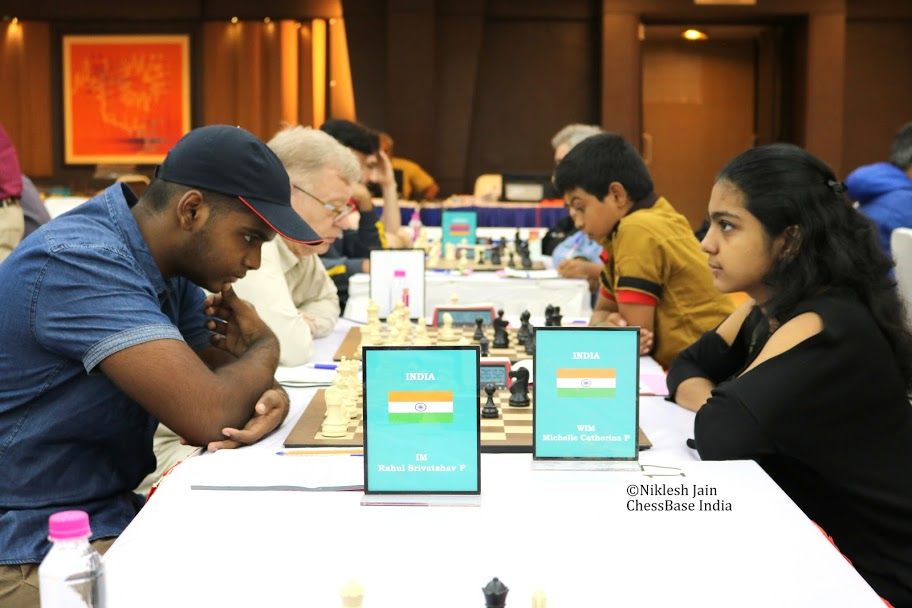 With her win over Rahul Srivasthav, Michelle Catherina has kept her chance of a WGM norm alive. She will be in a must-win situation in the final round, however. | Photo: Niklesh Jain

Another big upset was seen in the game between the 18-year-old Jeet Jain and veteran GM Pravin Thipsay. In a Ruy Lopez Archangelsk, Thipsay made an error on his 24th move and suffered a material disadvantage. 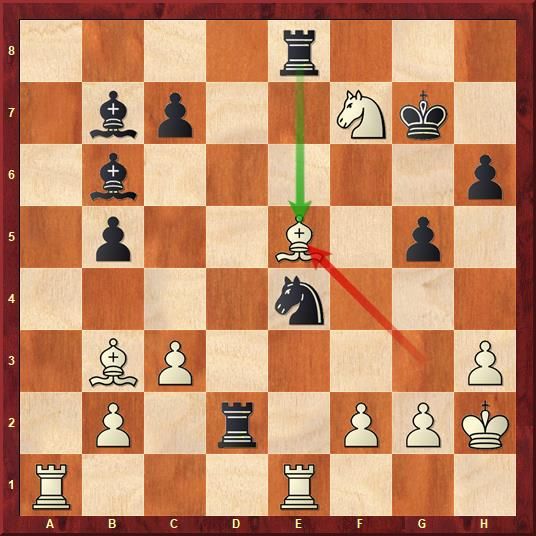 Here, Thipsay had just given a check with his bishop when Jain stunned him with the sham sacrifice 24…Rxe5. After 25.Nxe5 Bxf2 26.Red1 Bg3+ 27.Kg1 Bxe5, white just had two minor pieces for a rook. In about 20 more moves, Jain, with his two minor pieces plucked several pawns off white’s camp and rendered Thipsay’s position hopeless. 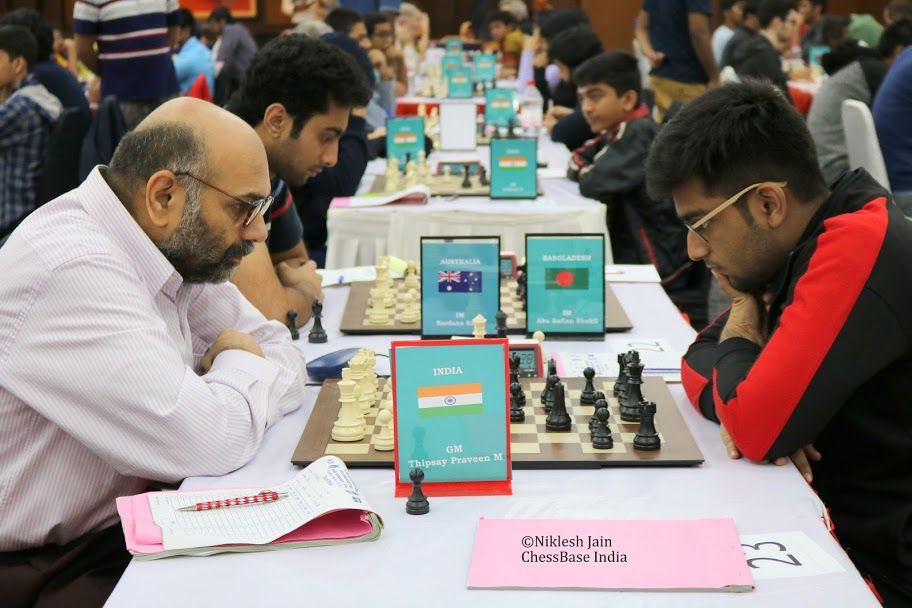 In the final round, the battle for the title will be between Vignesh NR, Martyn Kravstiv, Vitaliy Bernadsky and Alexander Predke. Since Vignesh is half a point ahead, a win would give him the title straight. But given that he will play Kravtsiv with black in the final round, this sounds unlikely. In any case, the maiden edition of the Gujarat International Grandmaster Open is poised to a nailbiting finish.