Deepan Chakkravarthy is the winner of 1st Lakecity GM Open

The 1st Lakecity International Grandmaster Open came to a successful conclusion here in Udaipur on Friday. At the end of ten rounds four players finished on the top tied on 8.0/10 points each. However, on the basis of tie-break scores, India's Deepan Chakkravarthy, who remained unbeaten throughout the event, was declared as the champion. Russian Grandmasters Maxim Lugovskoy and Ivan Rozum had to settle for the second and third places respectively; while Neelotpal Das, who scored as many points as the podium finishers, was relegated to the fourth spot. In the final round of the tournament, the encounters on the top six boards all ended in draws and on board seven IM Mitrabha Guha registered an emphatic victory against Odisha's Rajesh Nayak to secure fifth position in the overall standings.

From a field of several strong GMs such as Ivan Rozum, Maxim Lugovskoy, Swapnil Dhopade, Saptarshi Roy, Rajaram Laxman, and many more, it was Deepan Chakkravarthy who emerged as the unbeaten champion of the 1st Lakecity International Open 2019. Deepan proved his mettle with his super solid performance in the event, winning six out of the ten games, drawing four, and losing none. Rounds four and six were the most successful for him where he managed to beat two in-form Grandmasters, namely Hesham Abdelrahman and Neelotpal Das. Speaking to ChessBase India, about how he is feeling after this victory, Deepan said, "Of course I am feeling happy, but at the same time I am sure that this is just a tournament and there are many more tournaments to come, so I hope I will keep giving my best". 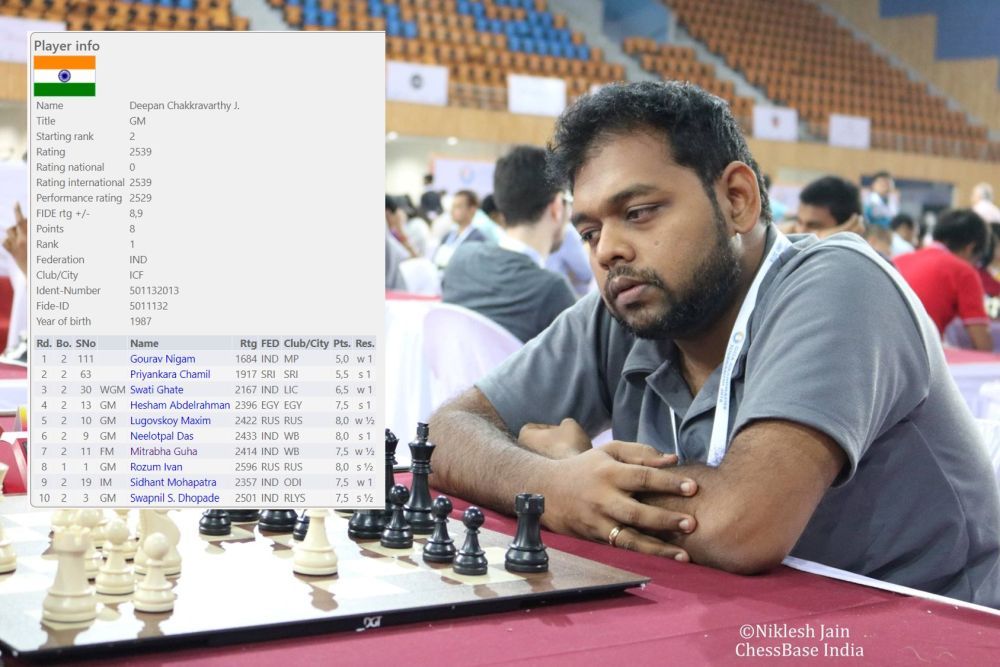 Deepan's favourite game was against Neelotpal Das in round six but his crushing victories against Hesham Abdelrahman and Sidhant Mohapatra in less than thirty moves were not less impressive either! | Photo: Niklesh Jain 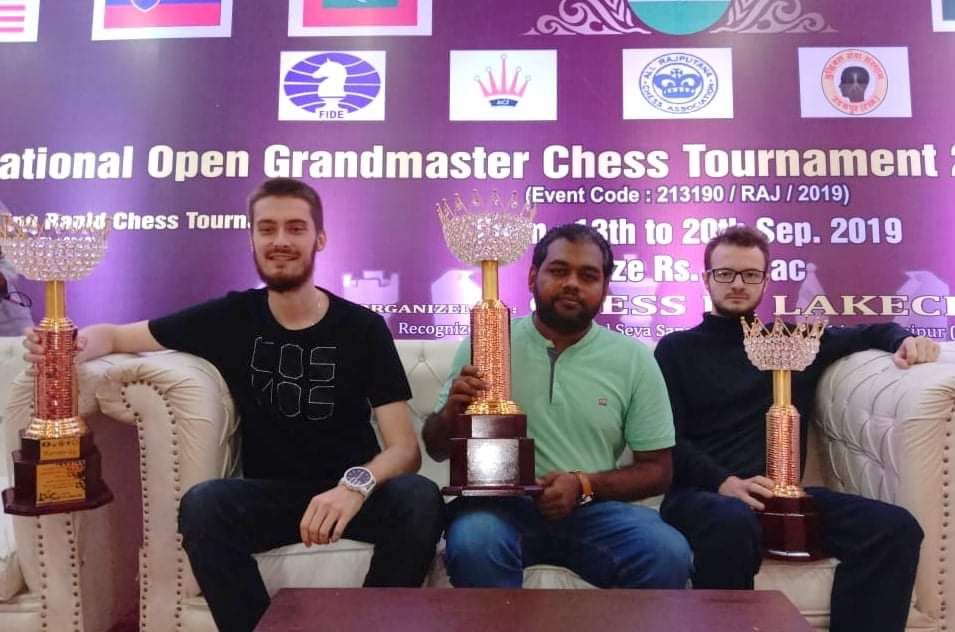 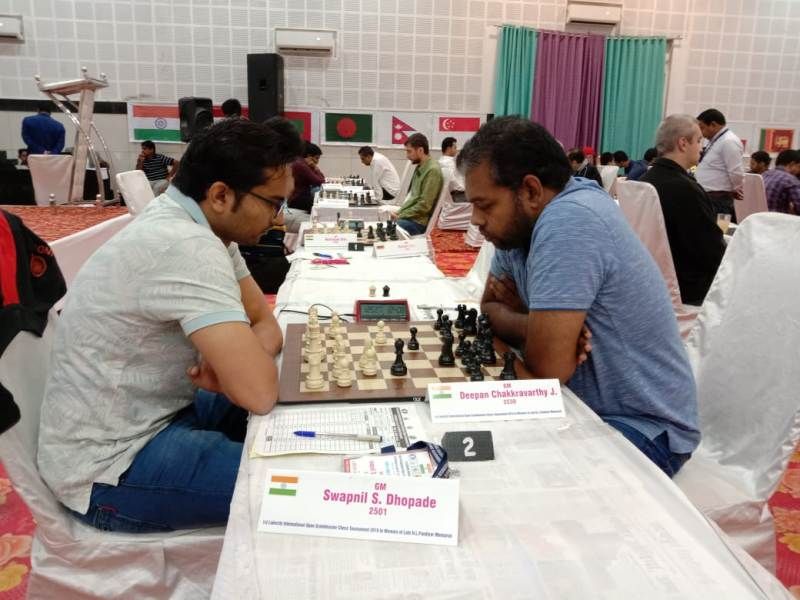 Deepan Chakkravarthy was up against Swapnil Dhopade (left) in the last round. This game was agreed to a draw in a perfectly equal rook ending after 29 moves | Photo: Sunil Soni

The most thrilling encounter in the final round happened between Rajesh Nayek and IM Mitrabha Guha, where the latter pulled off an energetic win to finish in the top five. Mitrabha had slipped down the rank-list after suffering a loss against GM Neelotpal Das in the penultimate round. Therefore, this last round victory was like a refreshing comeback for the West Bengal lad. 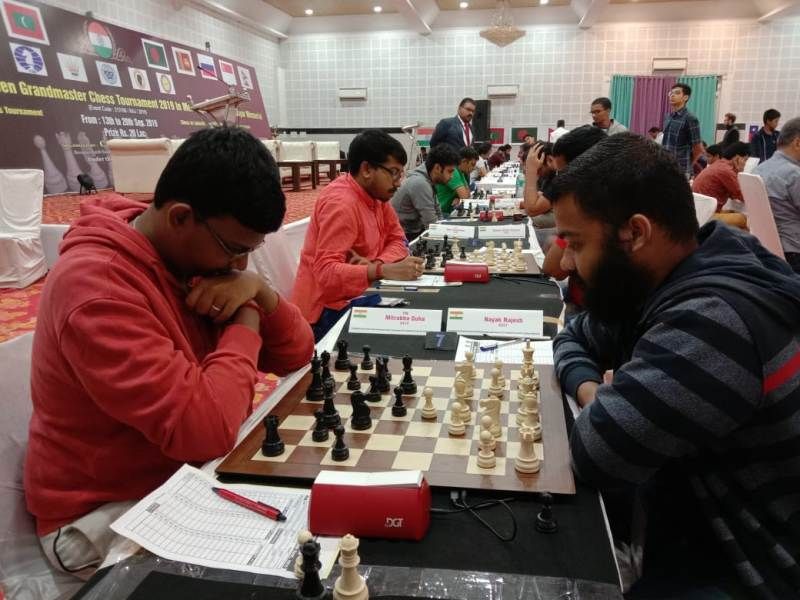 Mitrabha (left) in action against Odisha's Rajesh Nayak in the final round of the event | Photo: Sunil Soni

Mitrabha employed his pet Caro-Kann defense with the black pieces in his last round game and faced the exchange variation from his opponent. By move 11 itself a completely new position was reached on the board. On move 14 White had the chance to punish an abysmal knight move by the Bengal IM and seize the initiative but the player from Odisha squandered this opportunity and let his opponent consolidate himself. 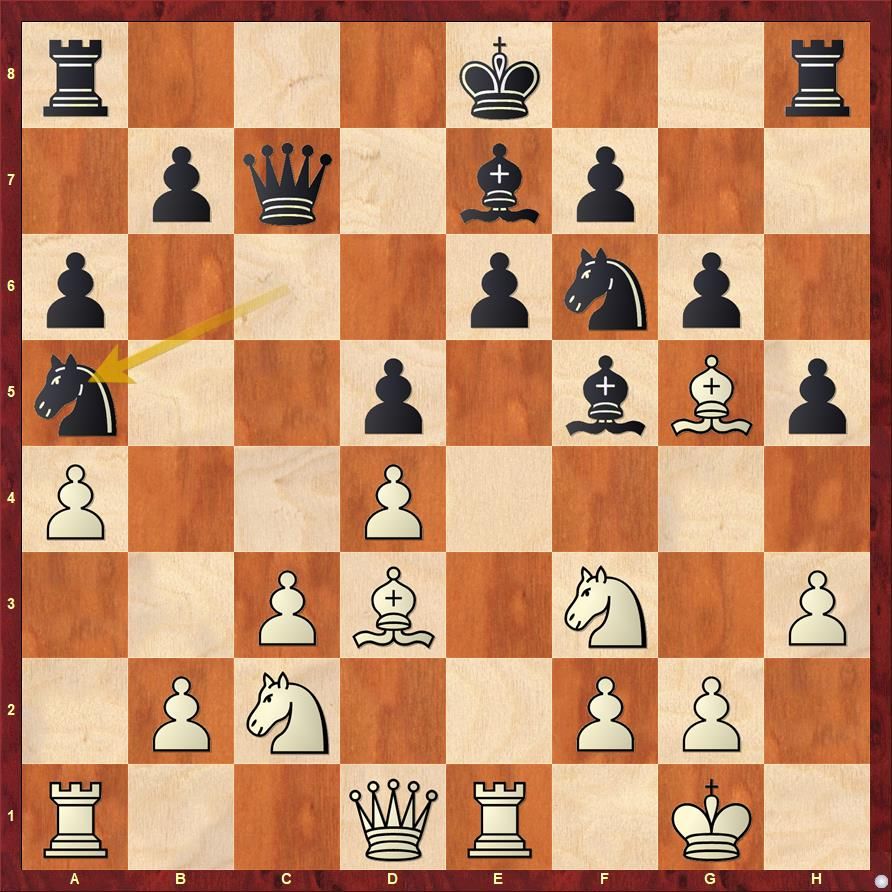 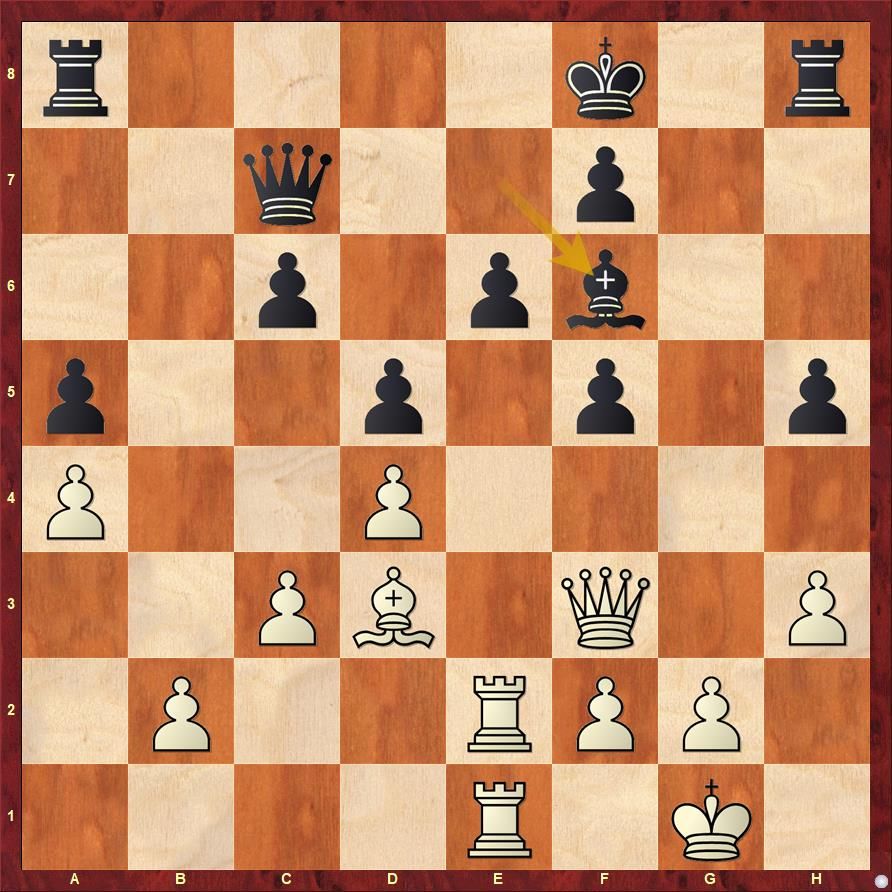 It is around this point Black's position started to look good. His king is safe on f8 and his rooks are ready to take on the b and g files. 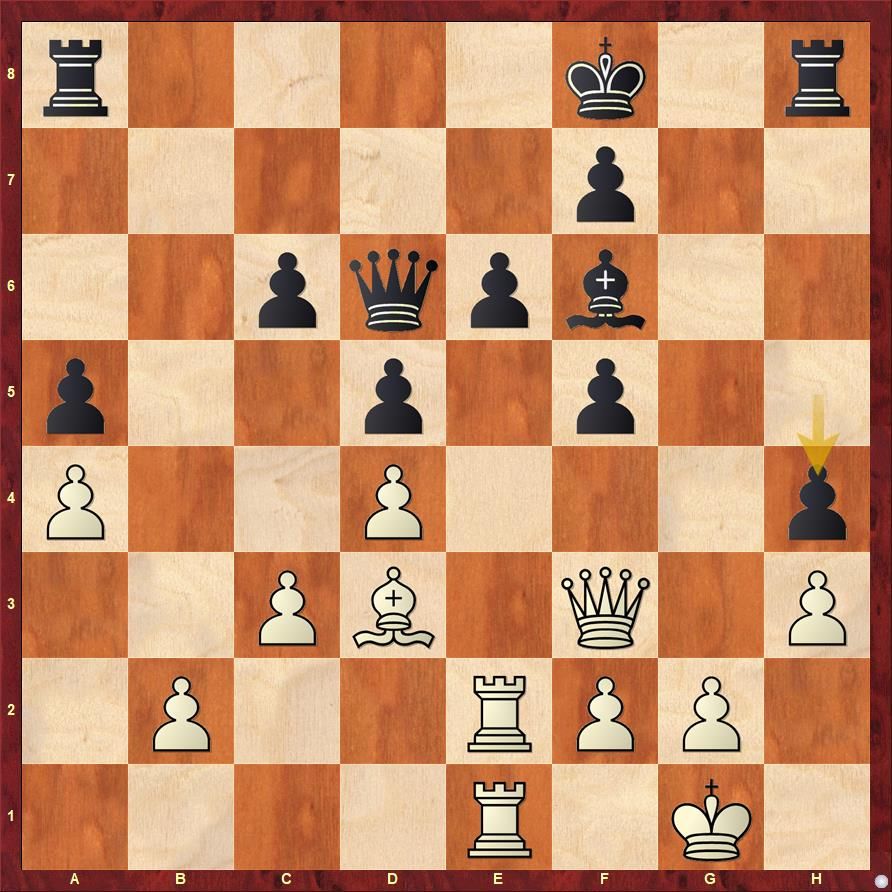 With 23...h5-h4 Black gained more space on the kingside. White should have prevented this by pushing g2-g3 in the previous move. 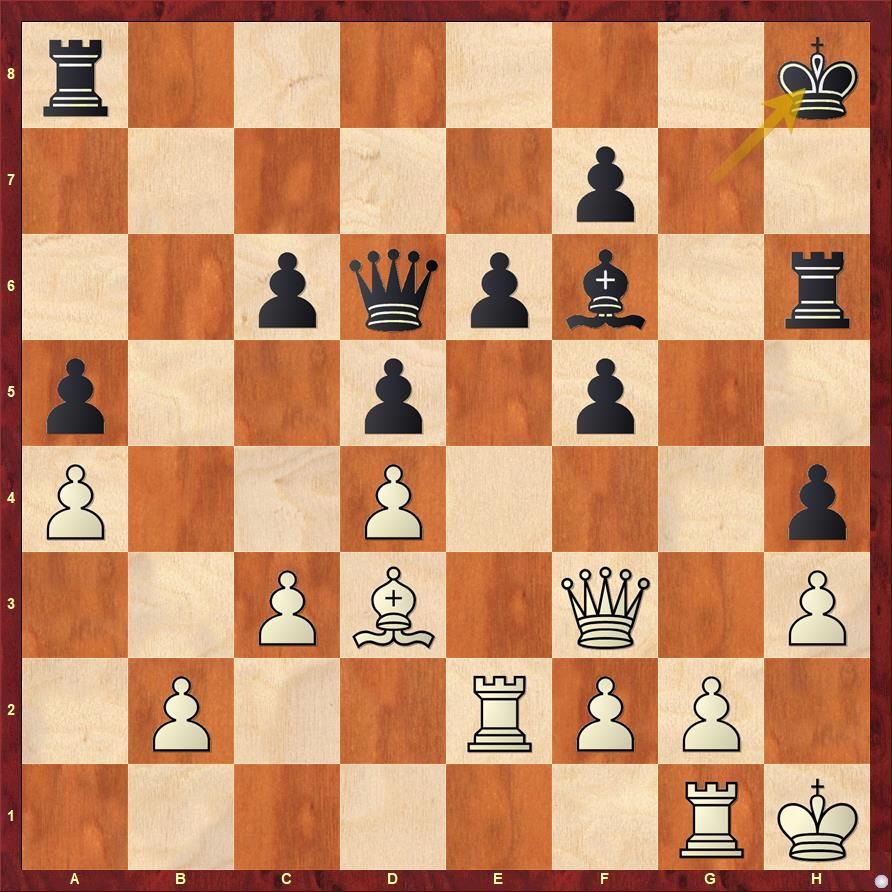 With 26...Kh8 Black prepared to bring his other rook on a8 into the foray. 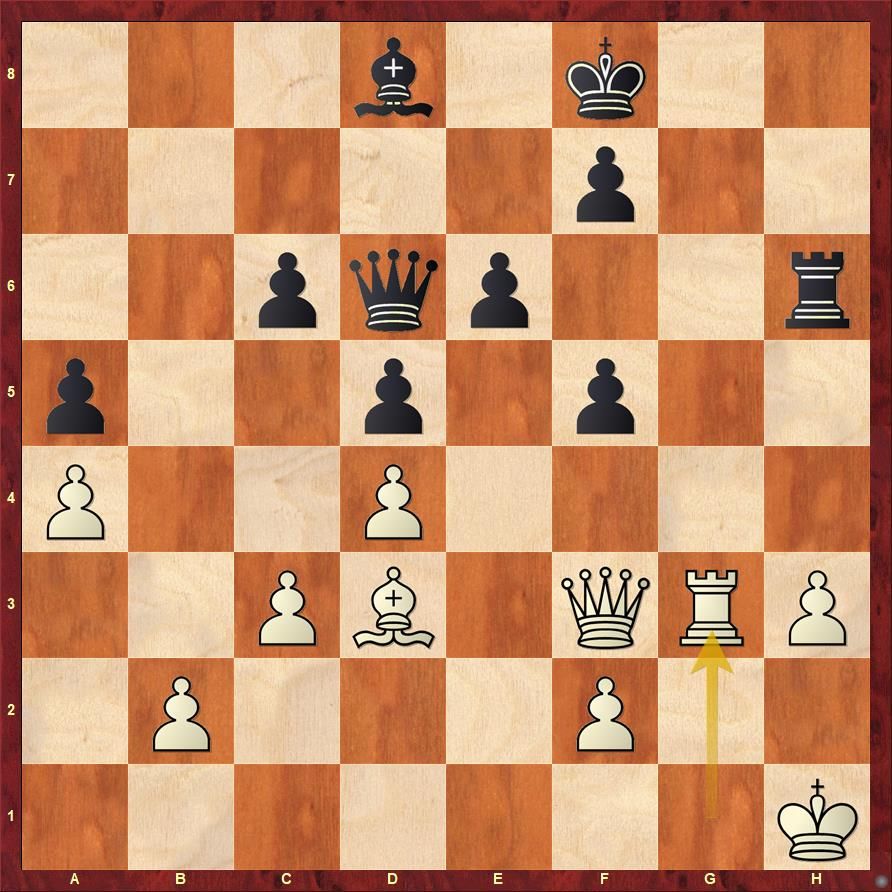 32.Rg3 was a further slip. Better would have been 32.Qg3 intending to exchange off queens and enter a simplified endgame. 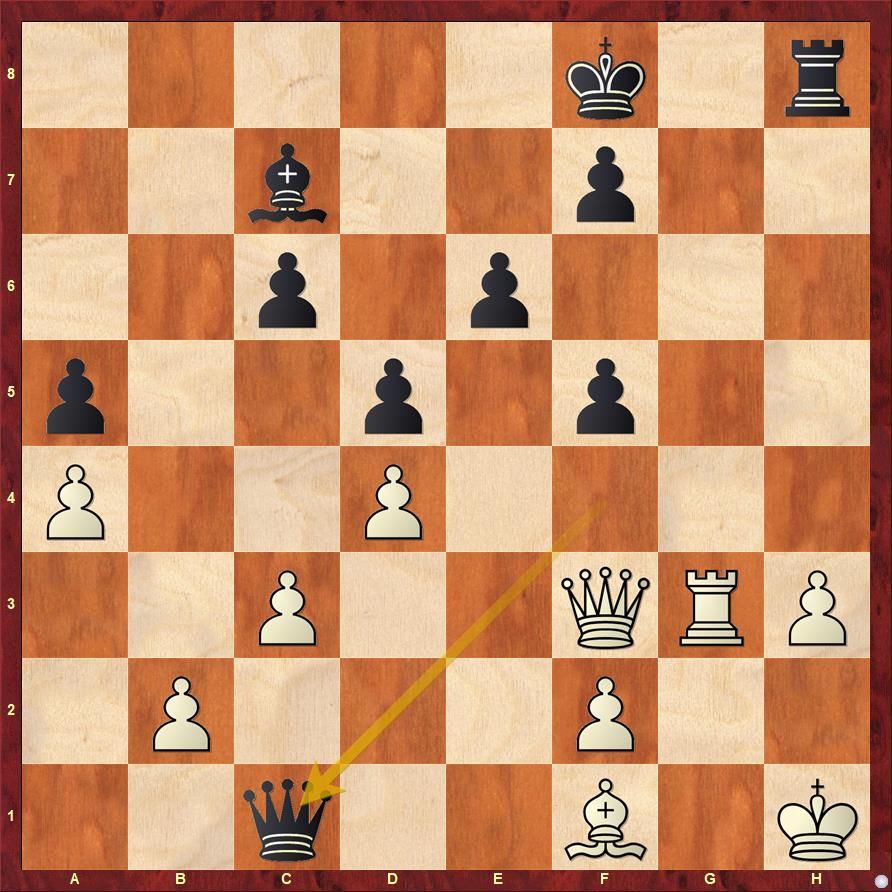 Black finally managed to break into White's position with 35.Qc1. Soon the b2 pawn was snapped off and the rest was converted by the Bengal IM without much difficulty. 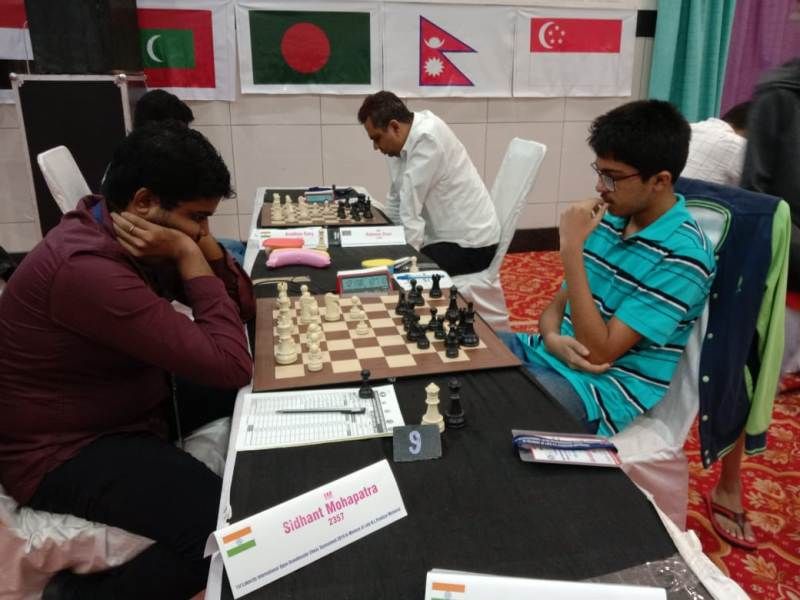 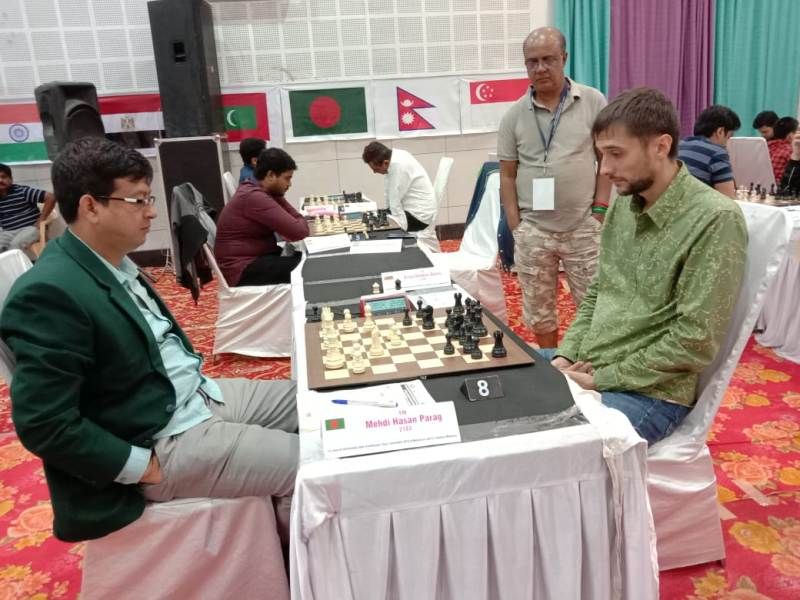 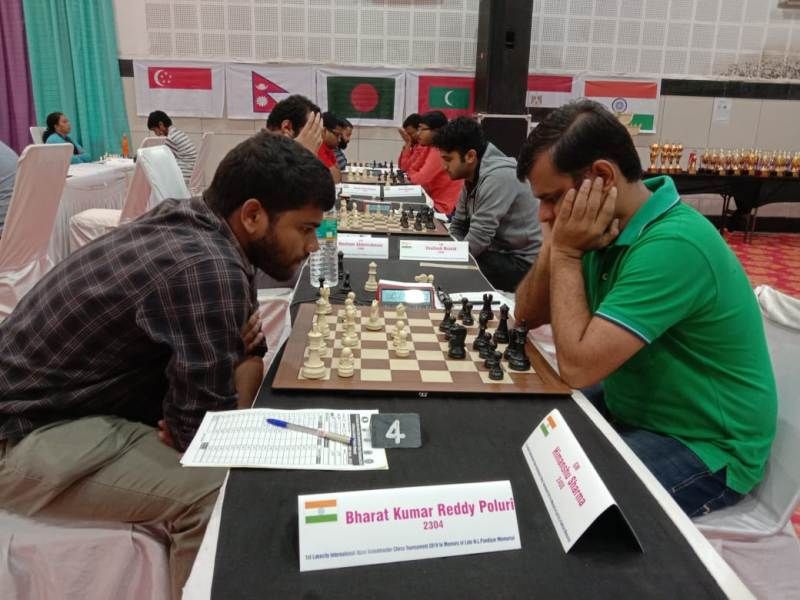 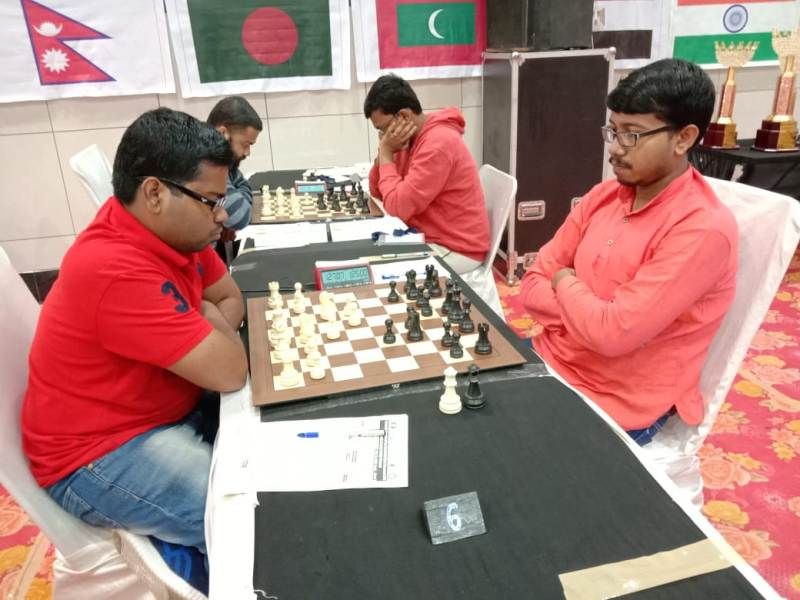 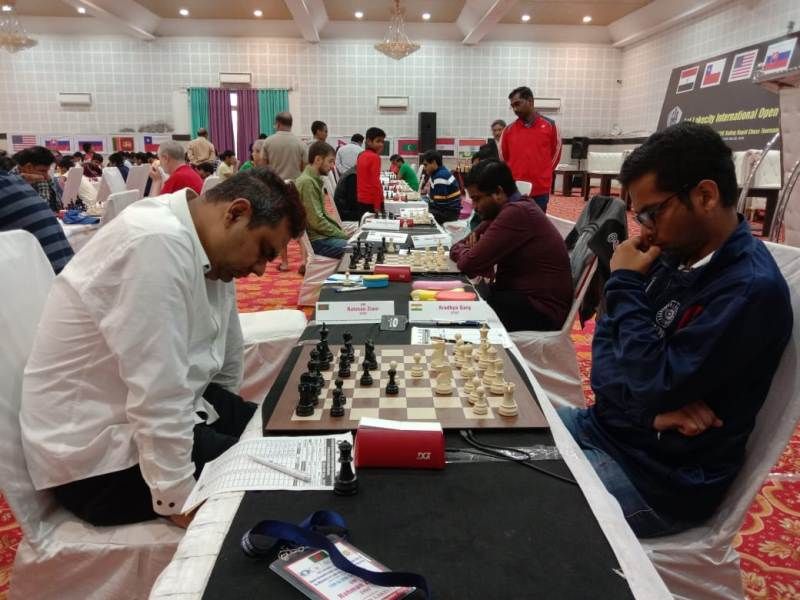 Bangladeshi GM Ziaur Rahman (left), who was the fourth seed of the event, had a forgettable run. In the last round he was held to a draw by Aradhya Garg | Photo: Sunil Soni 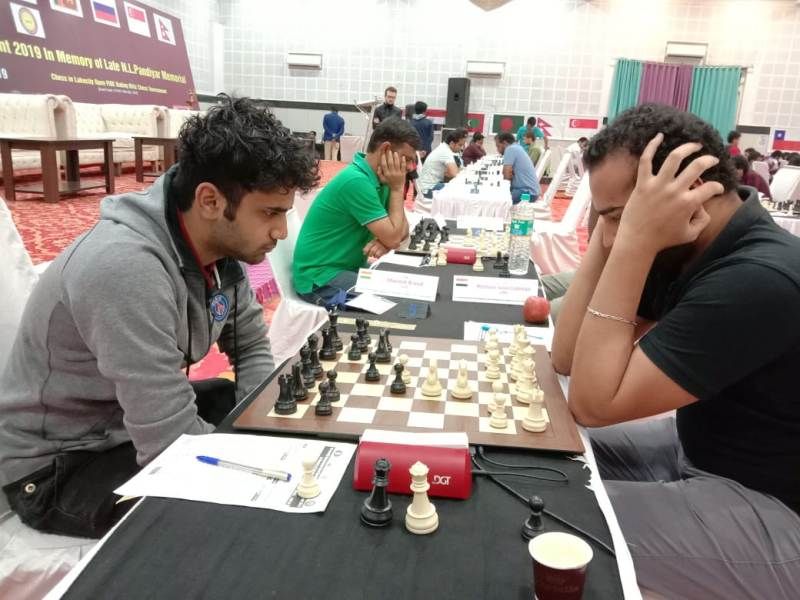 Egyptian GM Hesham Abdelrahman failed to make a strong finish as he was held to a draw by much lower rated Shailesh Dravid in the final round | Photo: Sunil Soni 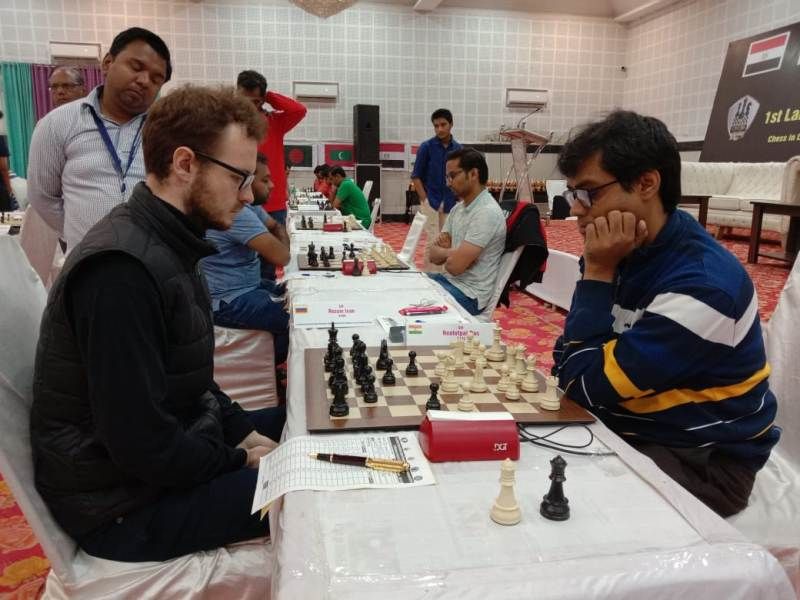 Ivan Rozum (left) and Neelotpal Das (right) agreed to a quick draw in the last round to finish with 8.0/10 each | Photo: Sunil Soni 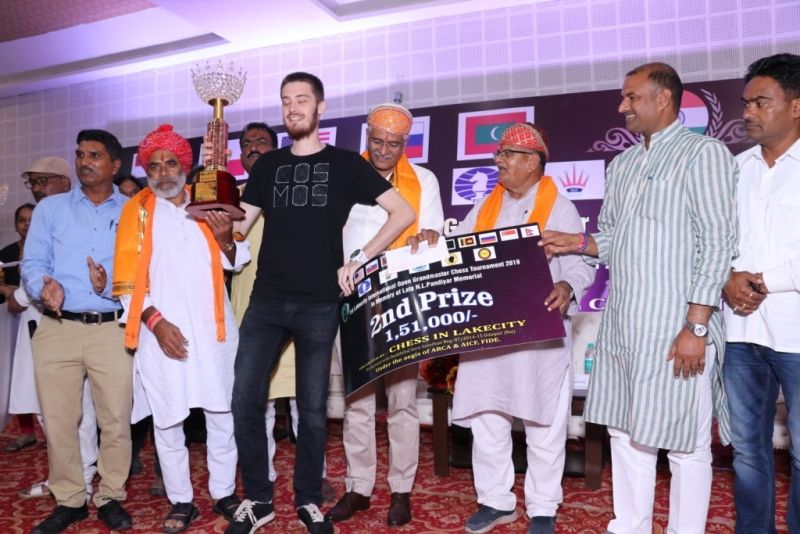 Maxim Lugovskoy, the event's runner up, with his trophy | Photo: Sunil Soni 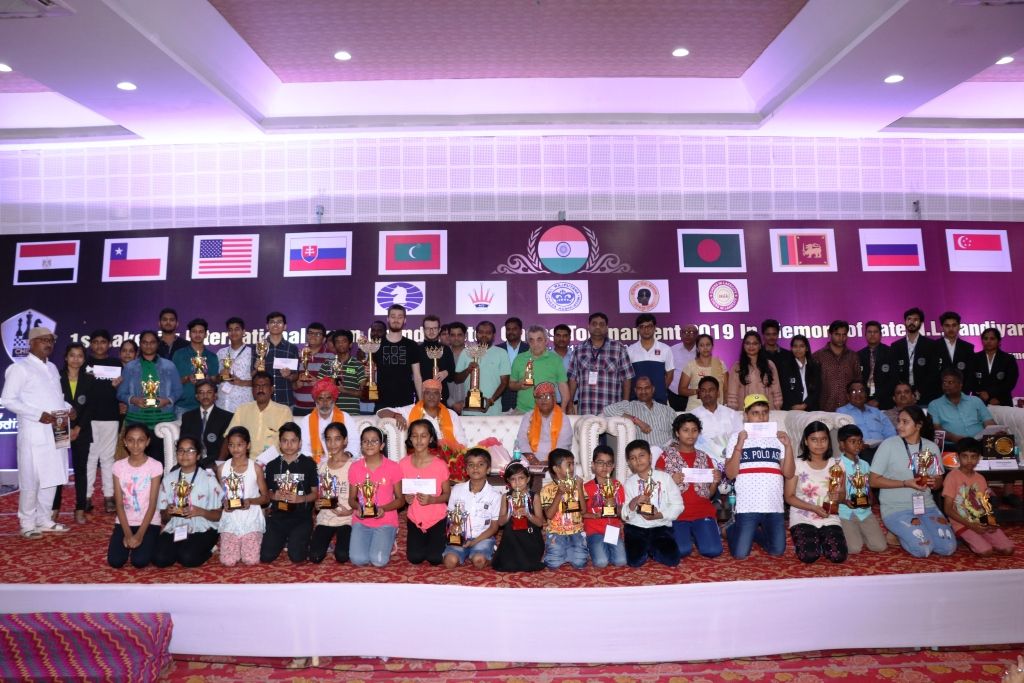 All prize winners of the event in a single frame | Photo: Sunil Soni

Results of final round