Improve your planning and understanding

If you play an opening, it is advisable not just to know the moves, but also the plan that is behind them. The ChessBase 15 Plan Explorer is able to show us these plans. It evaluates the games that have been played in different openings and shows how the players continued their development. Unlike the reference search it is not about next move, but about the further development. The Plan Explorer is a tool that helps us not only to remember the moves, but also to understand them. We will show you some practical examples and explain how it works. Graphic: ChessBase

We have chosen the term “tool” for the Plan Explorer deliberately, because the information it provides us cannot be put into practice blindly, but needs some previous processing by the human user. So turn off the radio or TV and concentrate completely on the chess board on your screen. 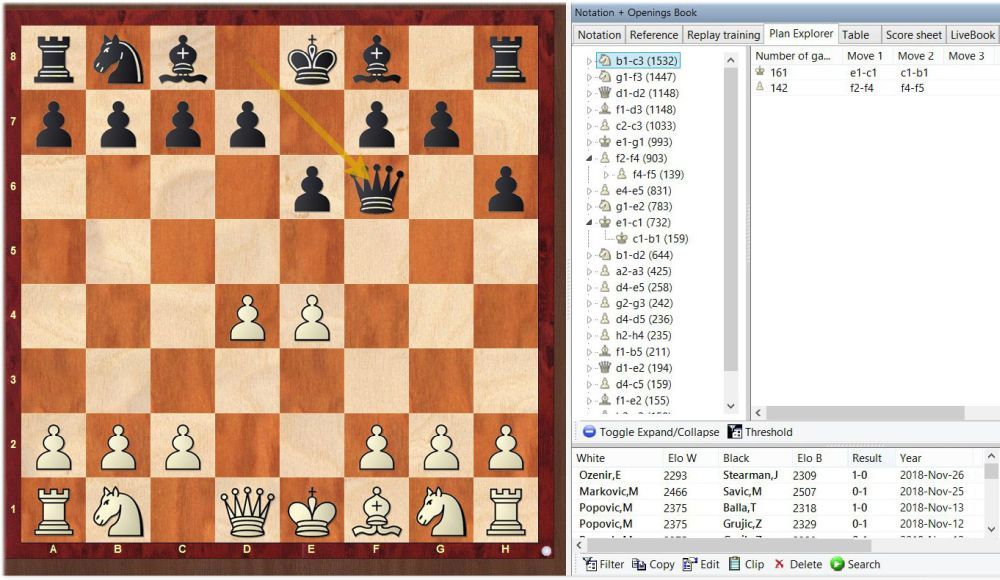 An example of using the Plan Explorer

On the chess board you can see the standard position of the Trompowsky Opening (1.d4 Nf6 2.Bg5 e6 3.e4 h6 4.Bxf6 Qxf6). If you click on "Plan Explorer", the program will examine all the games that have been played and that included the same position. Furthermore, it will examine which pieces and pawns were developed during the following moves. Only the relevant games will be taken into account (relevant means that the structure must have been played with a certain frequency).

What kind of information will be displayed?

First of all, the list will show the most typical development patterns of the pieces and pawns without giving them any further evaluation. In our example that means that in 1468 games the knight on b1 was moved to c3, the knight on g1 to f3, and so on.

It is important to mention that this does not necessarily happen in the next move but just in one of the next moves.

If you click on a certain move, you will get a list with games, in which that move also appeared:

Below the list you will find the following options to choose from:

With the options Toggle Expand/Collapse you can decide if you would like to see only the first move (Toggle collapse), or if you prefer to also see the following moves (Toggle Expand). By clicking on Threshold you can define how often a certain development should have appeared in order for it to be shown in the list.

In our example, that means that the move has been played in at least 8% of the games in order for it to appear in the list.

In the window above, you will find information which opening variations have been particularly successful. Our example indicates that would have been the variation castling long with f4-f5.

By double-clicking a certain move, for example f4-f5, you will once again get a list of games that included this manoeuvre.

From technique to practice

First of all it is useful to assess the information we have received:

• The knight on b1 can go to c3 or to d2. The latter requires the protection of the d4 pawn. This explains why c2-c3 was played so often.

• The king can castle long or short. Castling long seems quite improbable when the b1 knight is standing on d2, as it is difficult to develop the queen. Nc3 usually appears in connection with the queen having moved to d2.

• The program shows that Nb5 appears to be one of the more typical moves after Nc3. And that seems quite logical as the black queen is not protecting c7.

In the position we have it seems clear that we should have a closer look at the promising manoeuvres 0-0-0 and f4-f5. So Nb1-c3 looks like a useful way to begin. We play 5.Nc3 and the Plan Explorer changes to Black: 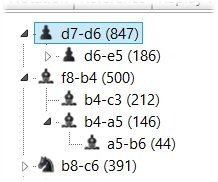 The most frequent move is d7-d6. Statistically, Bf8-b4 would be the second most played option. As Bf8-b4 is not possible any longer after d7-d6, it is necessary to examine Bf8-b4 and d7-d6 and d7-d6, without taking Bf8-b4 into account for Black´s possible development.

We will start with 6...Bb4! After we have chosen this move the Plan Explorer will show White again: 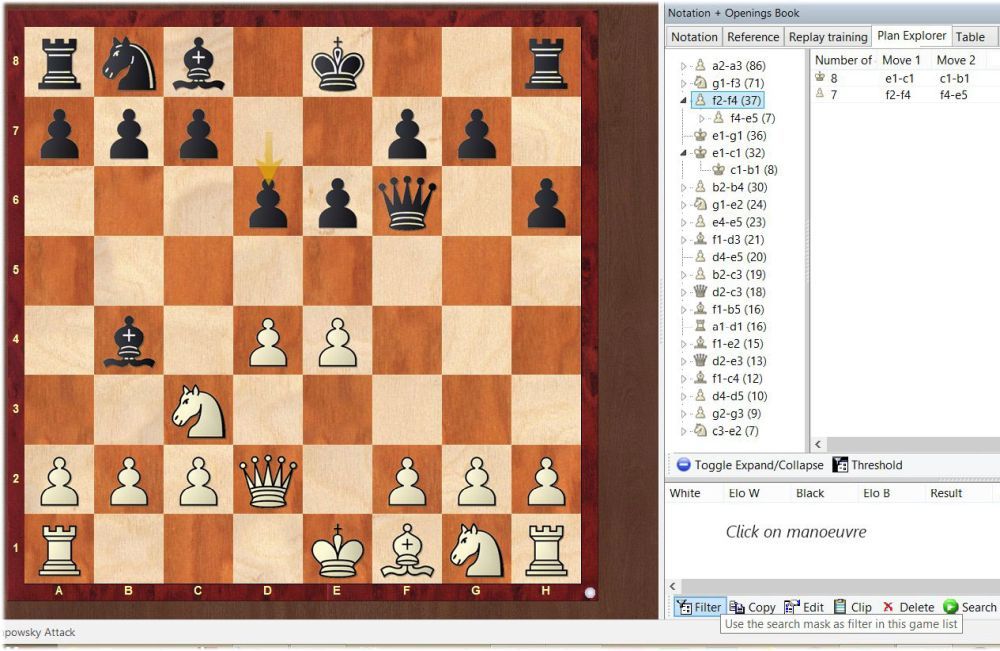 First of all I will have a look at all the games with f2-f4 that appear in the list. Then I will check out the games with 0-0-0, in order to get an idea how White would play in this situation.

Now it is time to have a look how the game actually continues. Of course, we can simply click on Reference and get a list with the moves that have been played.

The program will create an opening report in HTML format, listing the moves that have been played in the position seen on the board and, if possible, it will give a preview to how the development continued.

This is what (a small part) of an opening report would look like: 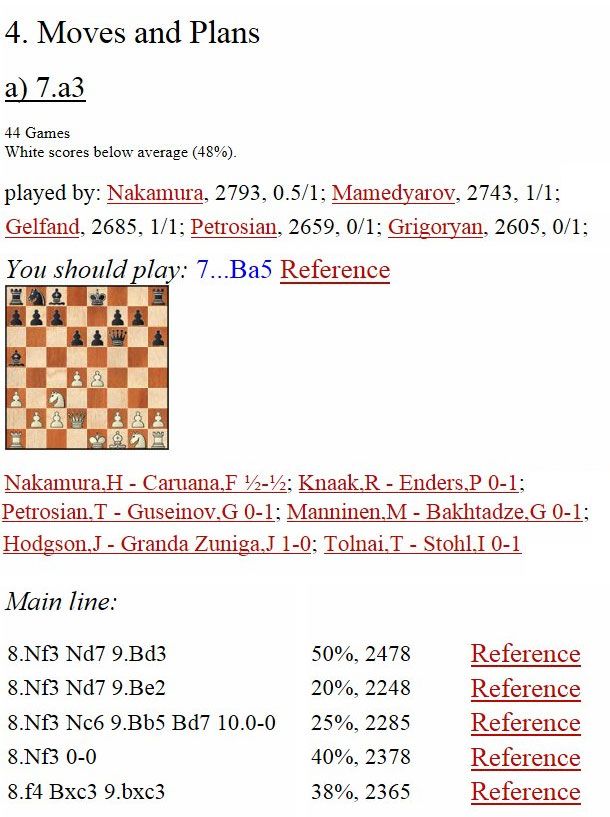 The Opening Report (click to enlarge) makes clear what the Plan Explorer had already suggested: the variation does not infuse great confidence in the white player. The pin of the c3 knight is quite unpleasant, and due to the missing dark squared bishop White cannot really take advantage of the black weaknesses. In addition, the black pieces are quite flexible in the centre.

But that is not all bad, because the Plan Explorer also tells us that the b1 knight could move to d2. 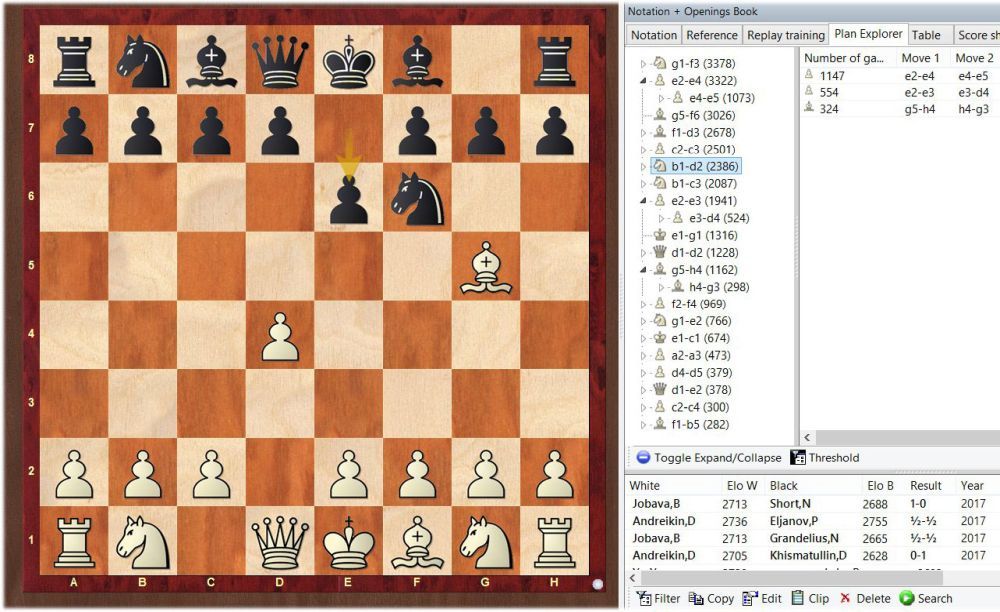 Now you can examine the further development of the knight moving to d2 yourself! Have fun and good luck! If you have questions or suggestions for other tutorials, please do not hesitate to e-mail me: Martin.Fischer@chessbase.com. Martin Fischer, born 1962, is a ChessBase staffer who, among other things, organizes and holds seminars throughout Europe and helps administer playchess.com.