Lull before the storm at the FIDE Online Olympiad 2021

India's journey at the FIDE Online Olympiad 2021 begins from the 8th of September 2021 at 4.30 p.m. The players arrived at Taj Coromandel on 6th of September and the premise has turned into a mini-training camp. You can see coaches working with the players and the seriousness in the eyes of each of the participant. At the same time you can also see the camaraderie as jokes are cracked and hyper bullet is played! Staying at one place has definitely helped the team to create a strong bond - one of the key elements to progress in this event. IM Sagar Shah and Amruta Mokal bring you the entire happenings from Chennai and describes the atmosphere. It's the "Lull before the Storm!"

The FIDE Online Olympiad 2021 is about to begin in a few hours from now and the excitement levels in the chess fans is at an all time high. In 2020, Indian team performed really well and won a joint gold medal along with Russia.

Due to the cloudflare outage that occurred on the final day of the event, both the finalists became the joint gold medal winners

The question on everyone's mind is whether India will be able to better its performance and win the gold medal once again, but this time solely! Let's have a look at the pairings and what's in store for team India.

This is the pool (B) in which team India belongs. India is the top seed followed by Azerbaijan, Hungary and France

The FIDE Online Olympiad began with over 150 teams and now the number of teams left are just 40. 25 teams have been seeded based on their average rating strength, while 15 have qualified from the previous stages. Four pools have been created of 10 teams each and top two teams in each pool will qualify for the quarter finals. For India the biggest challenge in the group stage will come from Azerbaijan who has Mamedyarov and Radjabov in their ranks. An important thing to remember for Indian fans is that although two team qualify for the quarter finals from each pool, it is quite important that India finishes first. That's because the 2nd placed team in B group (India's group) will play against 1st place team in C-group - Russia.

The four groups in the top division

While there are several strong teams in each group, I have tried to predict a bit in the video below. China looks the strongest in Group A, India in group B, Russia and Group C and Poland in group D.

Some of the predictions made by IM Sagar Shah. If things go as per then India might meet Russia in the finals once again! 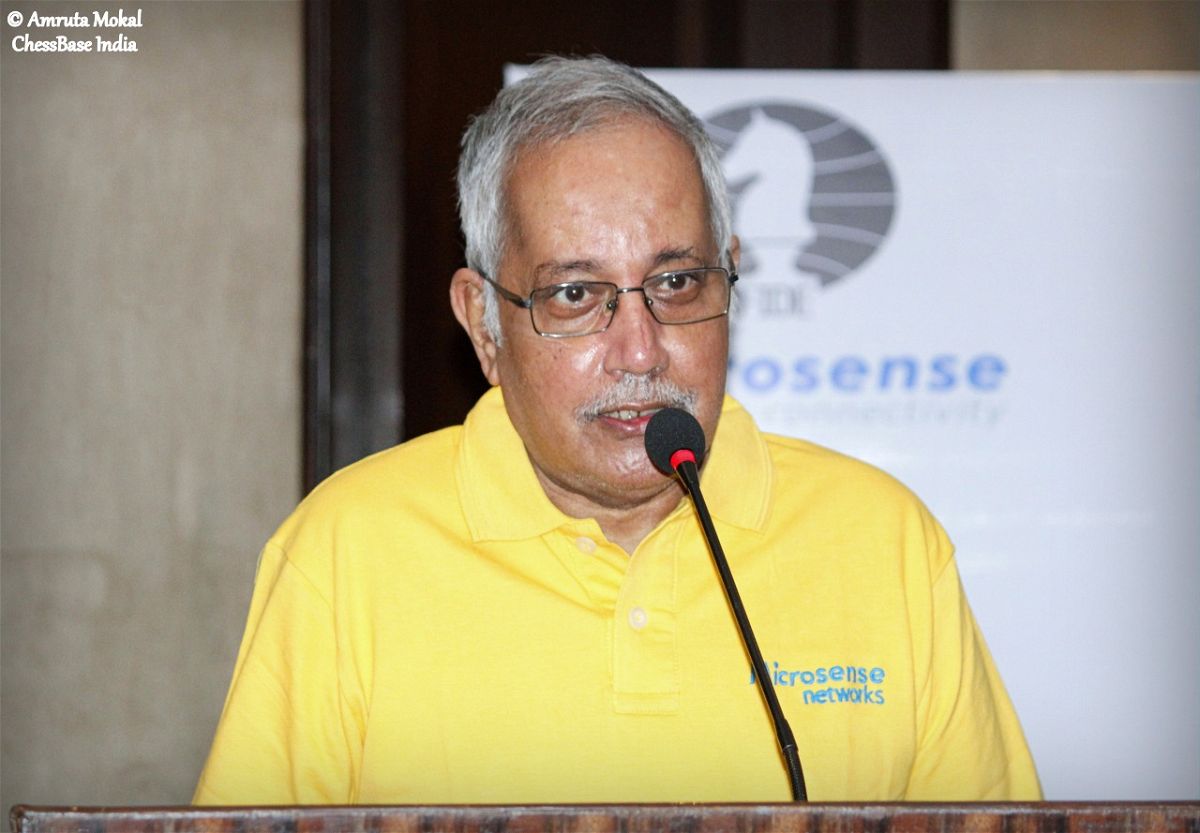 Kailasanathan, the managing director of Microsense, and the man who has been supporting Indian chess for several years now

The first time I saw the name Microsense was back in 2017 when both Adhiban and Harikrishna had their logo on their t-shirts at the World Cup 2017. Microsense had sponsored both of them and in the next couple of years I heard the name several times - they have supported over 30 young talents of Indian chess with yearly sponsorships. They have also been the reason why some of the best youngsters of our country got a chance to work with world class players like Kramnik and Gelfand. This time as well it is Microsense, who has decided to rise up to the occasion and have brought the entire team together by providing them with accommodation along with boarding at the Taj Coromandel in Nungambakkam, Chennai. Nine out of twelve players have been able to make it to the hotel. Harikrishna, who lives in Prague, did not fly to Chennai and will be playing from home. Humpy and Harika couldn't make it due to personal reasons. 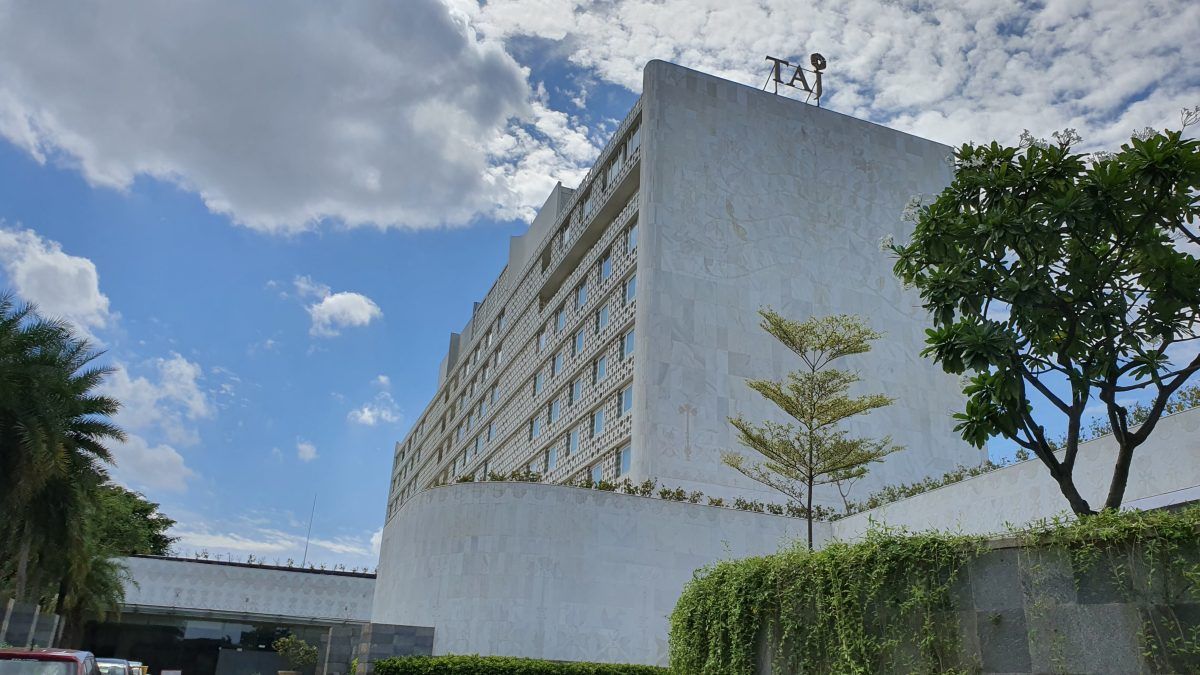 In 2020, one of the problems that the entire team faced at the Online Olympiad was with regards to the internet. Mid way through the tournament, the Indian team tried to work with Speedify, a company that ensures switching over of your internet connection without a huge delay. This time the team has gone one step ahead and Microsense has put up a three tier connection for the players. When it comes to technical details, I am not a huge expert, but a three tier connection essentially means that if the primary internet goes down, it automatically switches to the secondary and if the secondary goes down, then you have the wireless connection. 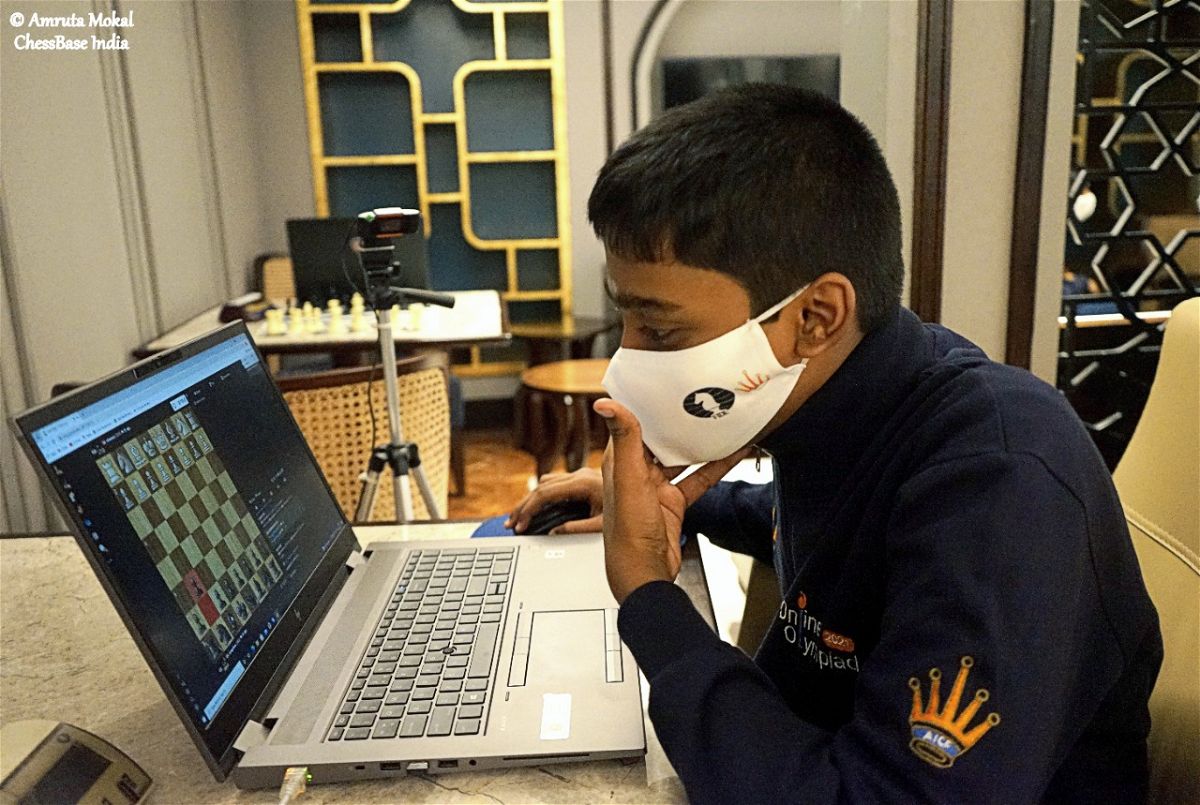 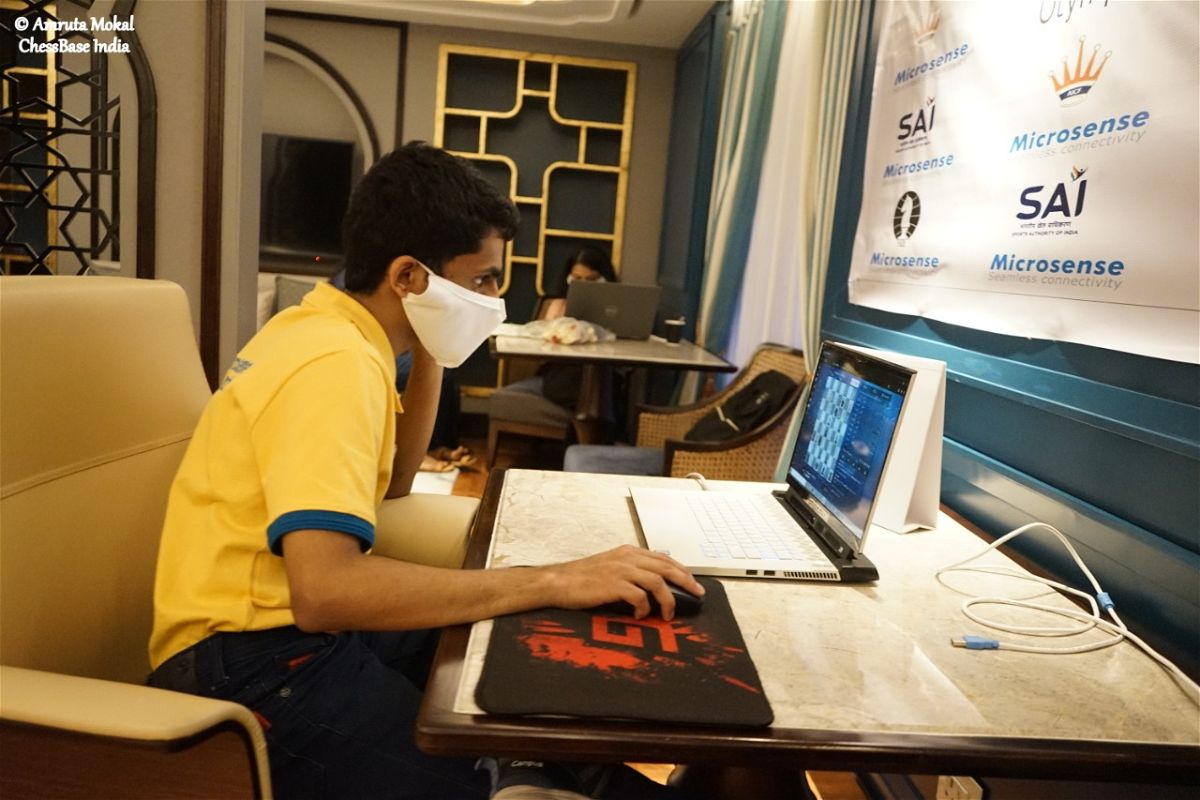 Nihal had to do the test with regards to the internet, but began playing online! Show chess to the young lad, and he will forget just about everything!

The Team and the camaraderie 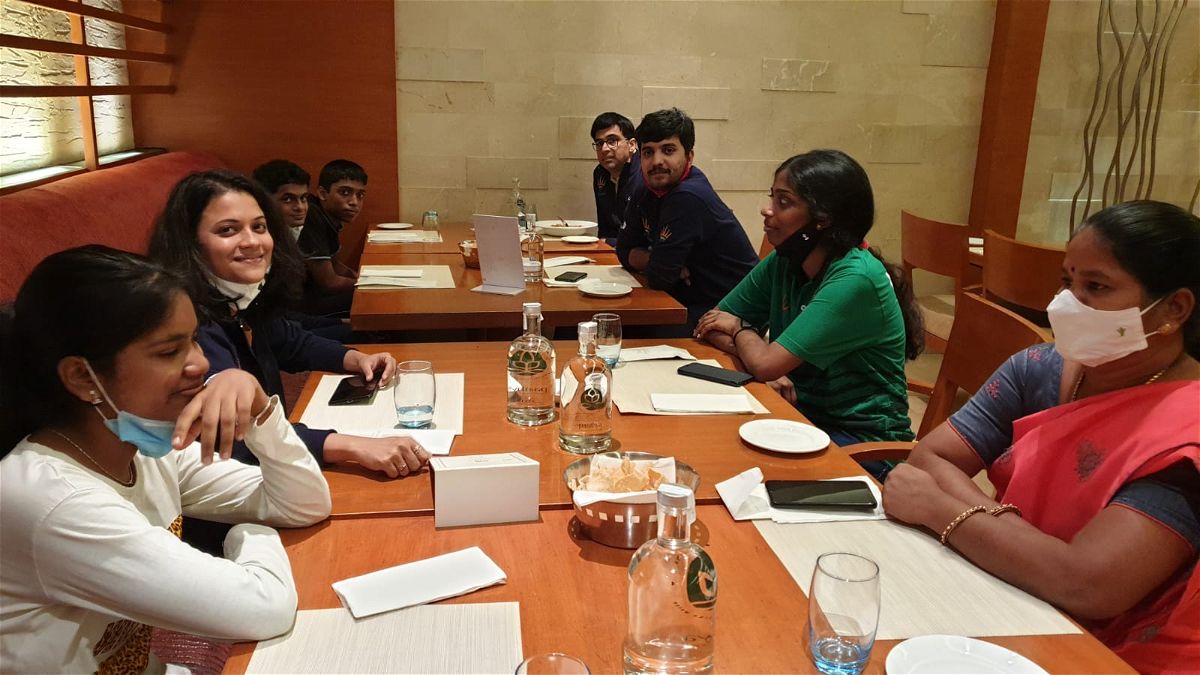 A team that eats together, wins together! 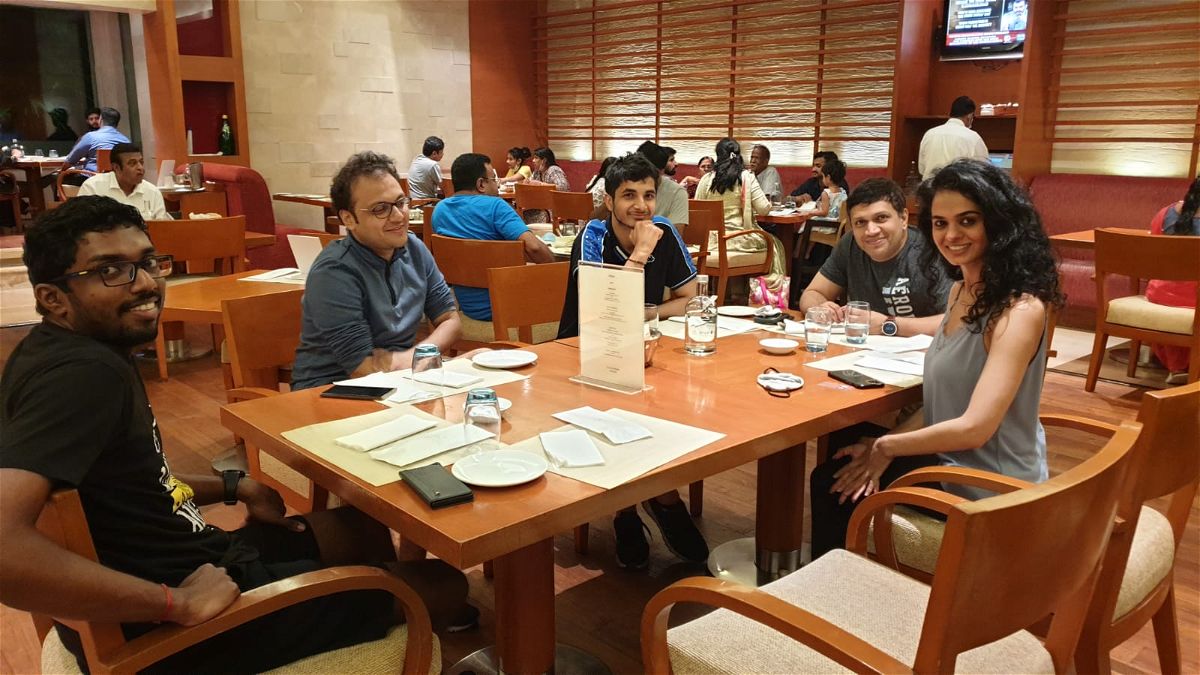 The dinner table is always filled with interesting conversations! 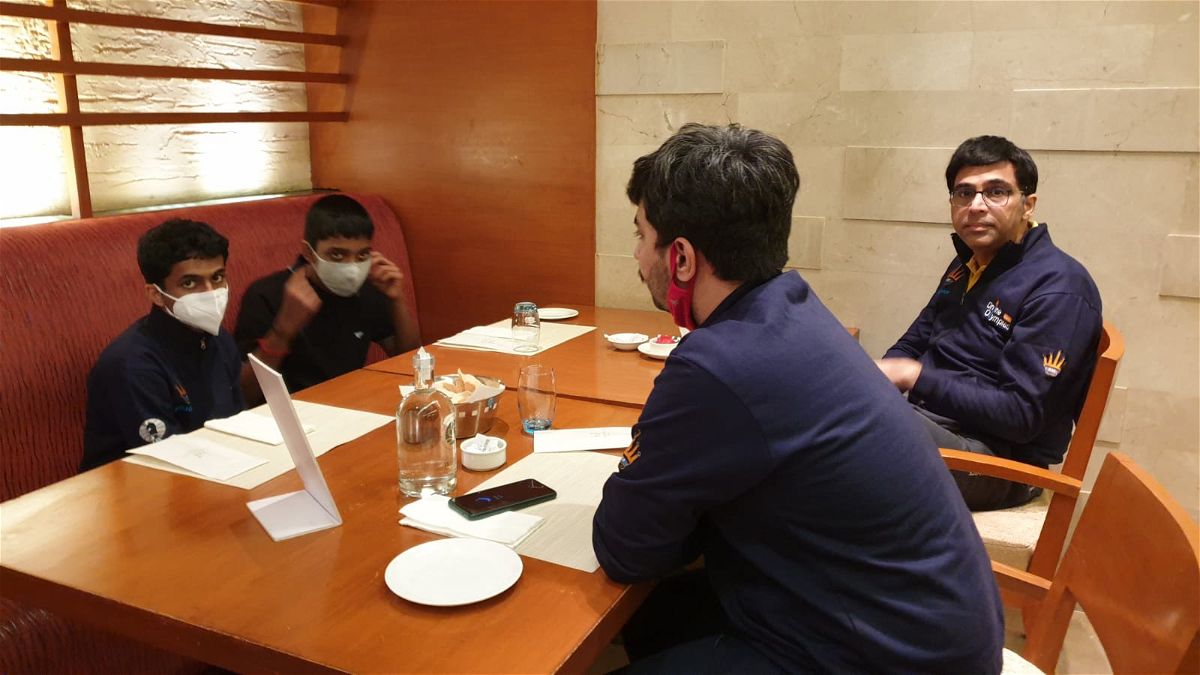 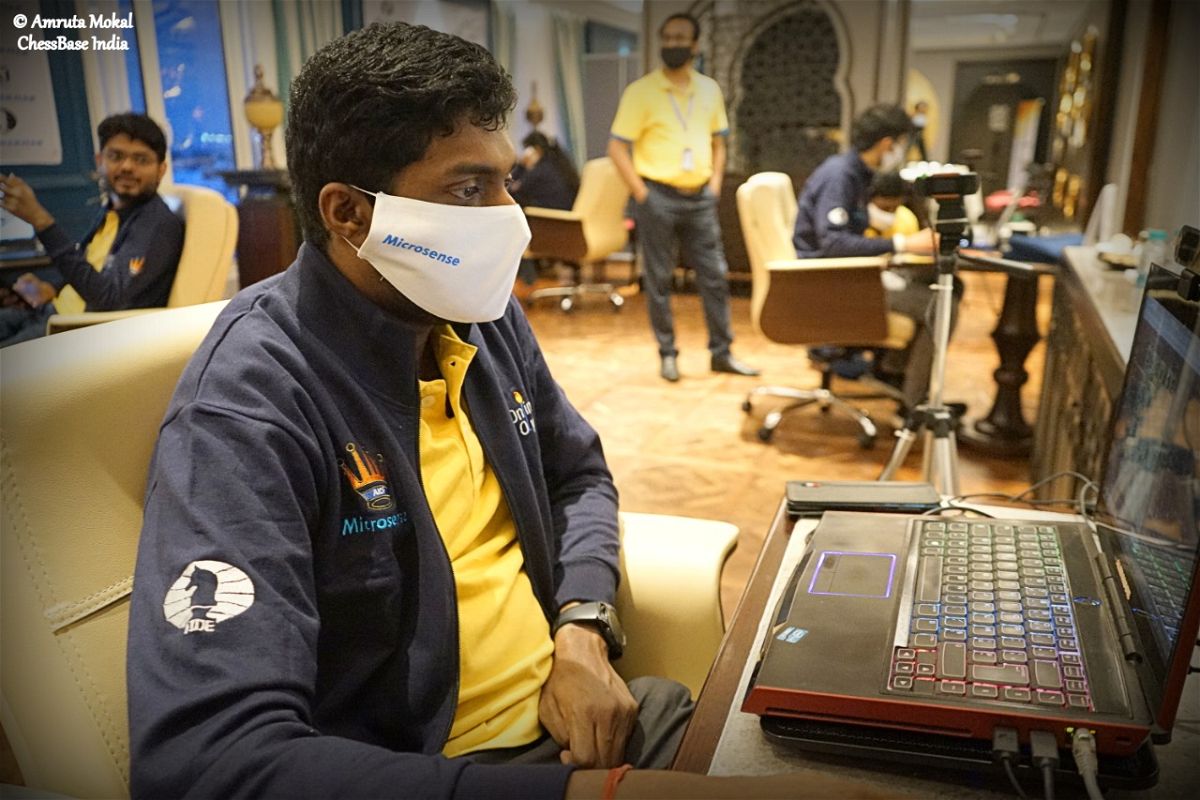 Adhiban was not part of the team in the 2020 edition. He would be looking to fire right from the word go! 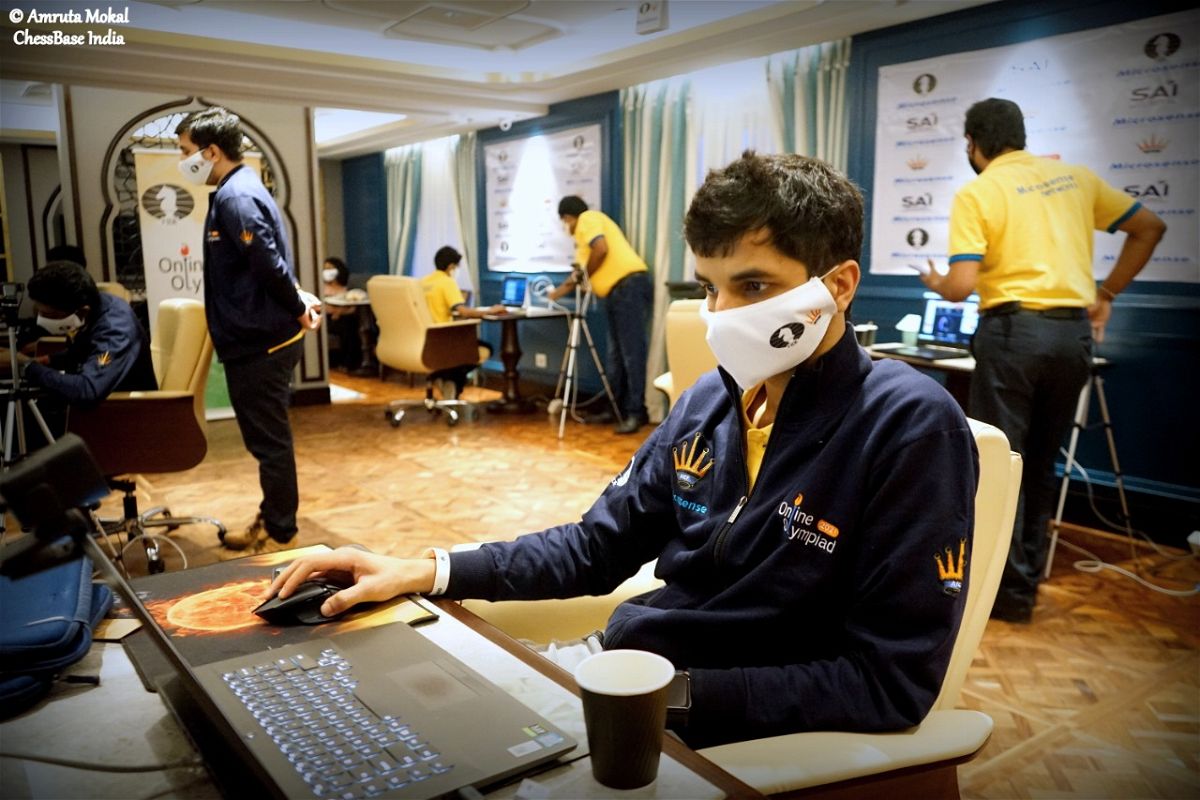 GM Vidit Gujrathi juggled many roles in last year's edition being the captain of the team. This year he can focus entirely on his chess! 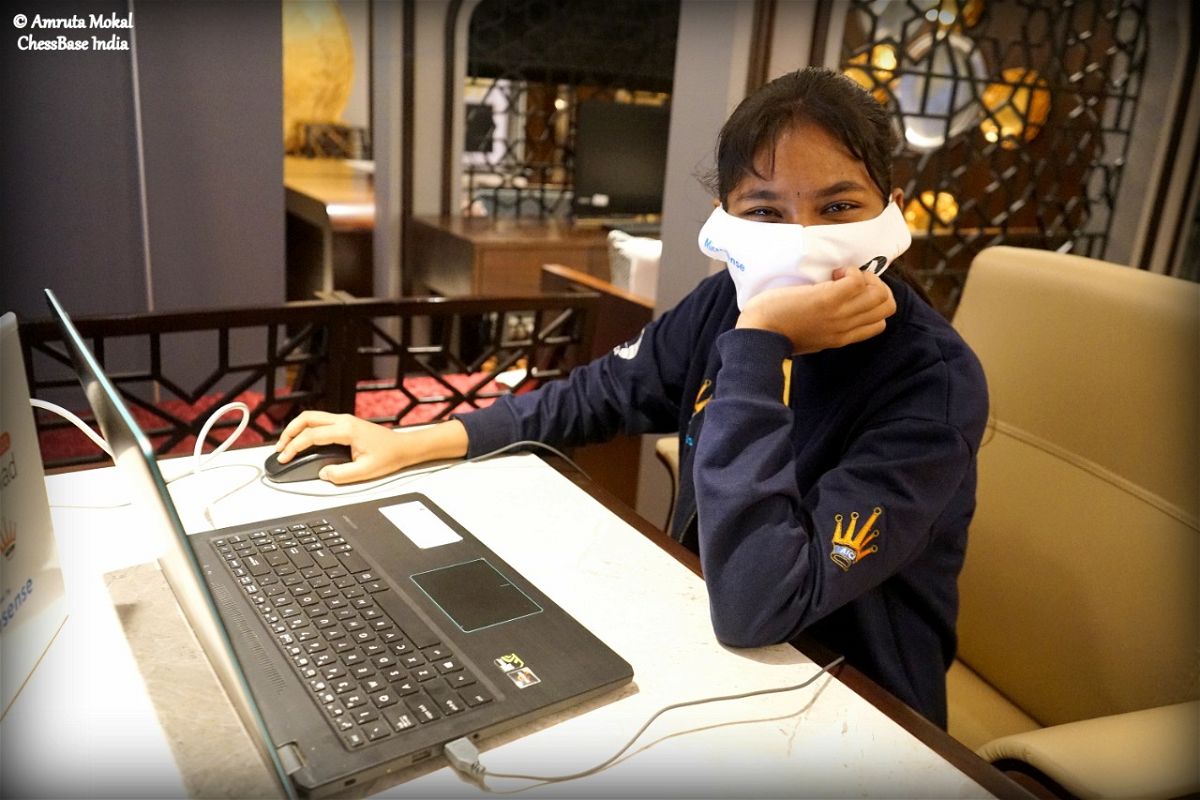 Little Savitha Shri is just 14 years old and is making her debut! Speaking to her you get to feel her excitement and also realize that she has absolutely no nerves!
How often do you see two siblings representing the country at the highest level - Vaishali and Pragg are great inspirations to the young generation out there!
This is Vishy Anand's 10th Olympiad. He began playing from 1984 Olympiad in Thessaloniki when he was just 14 years old. He played until 1992 and then in 2004 and 2006. Eventually he made a comeback in 2018 at Batumi. Anand played at the Online Olympiad in 2020 and will now be the captain of the team in 2021. If you want to get a glimpse of Anand's impeccable memory, check this video out, where the 5-time World Champion recollects games which he has played 35 years ago.
Vishy Anand remembers some of his tremendous wins at the Olympiads from 1986 to 2018
Men in Blue!

AICF and the support

On 6th of September 2021, a press conference was held in the Taj hotel. All the team members, coaches and sponsors answered questions posed to them by media. 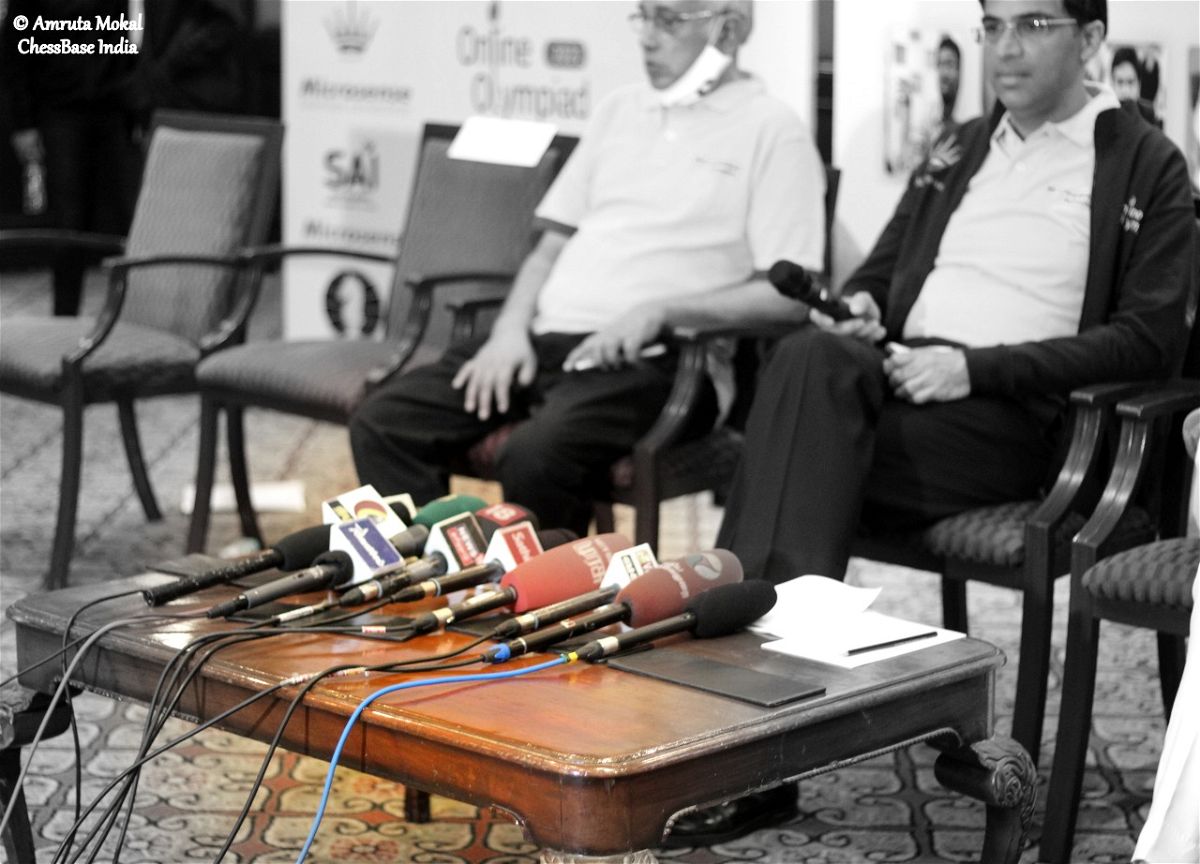 A lot of mics there! 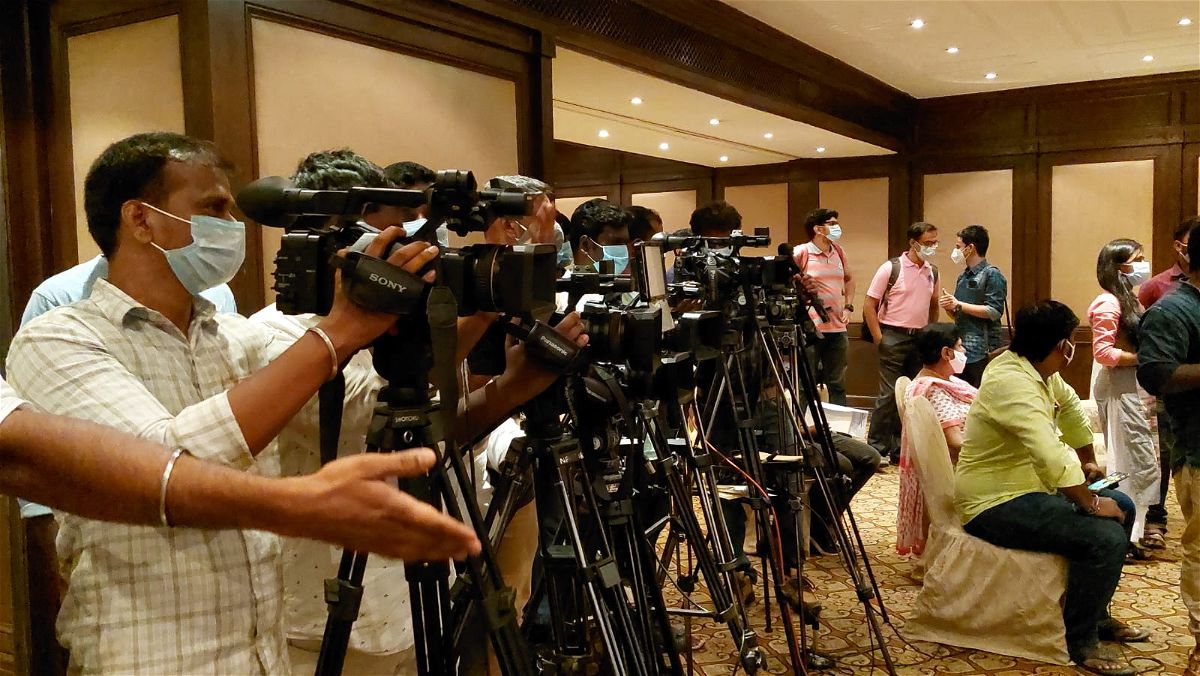 The media houses across India have a lot of interest in the FIDE Online Olympiad this year
Kailasanathan, Vishy Anand and Dr. Sanjay Kapoor 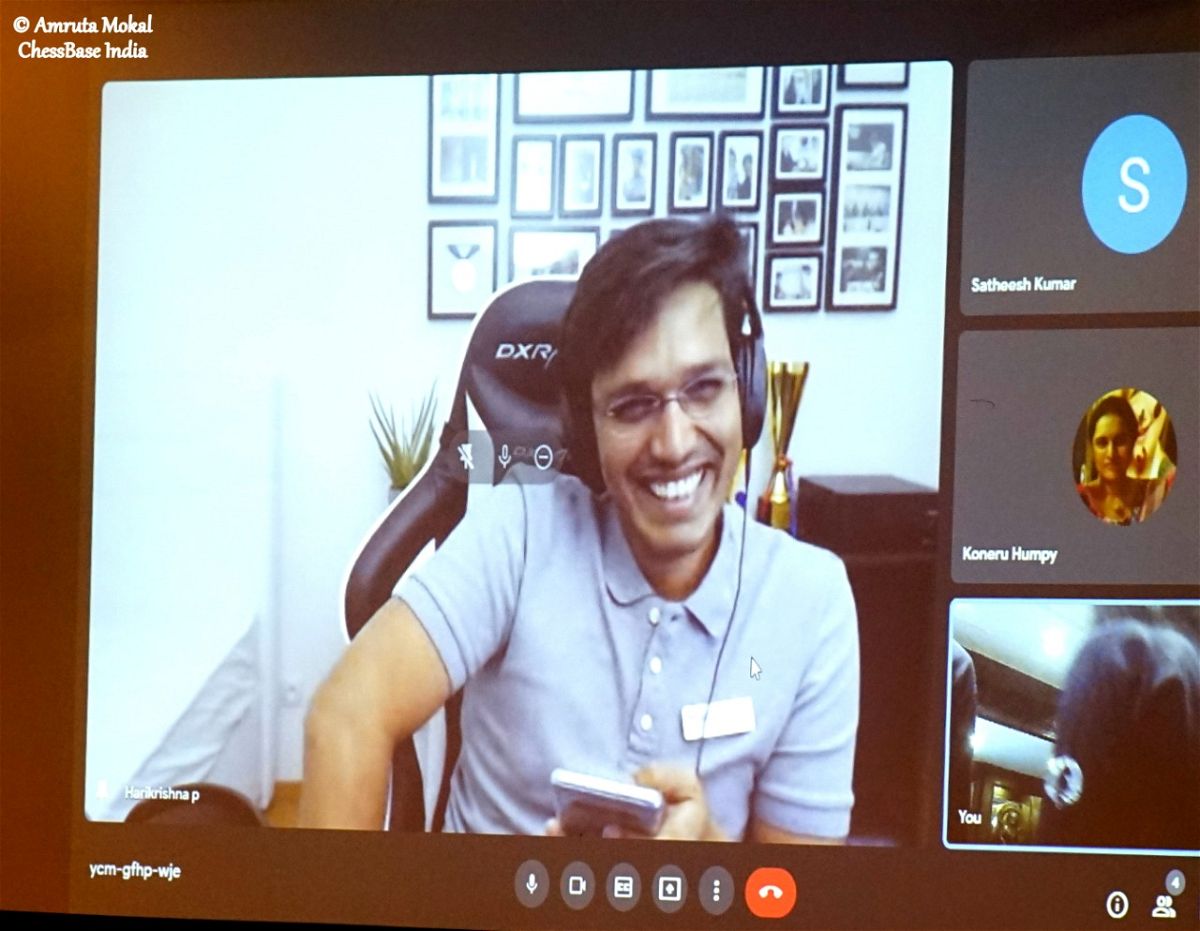 Hari attended the press conference from his home in Prague via Google Meet
Humpy also made it a point to be a part of the proceedings! 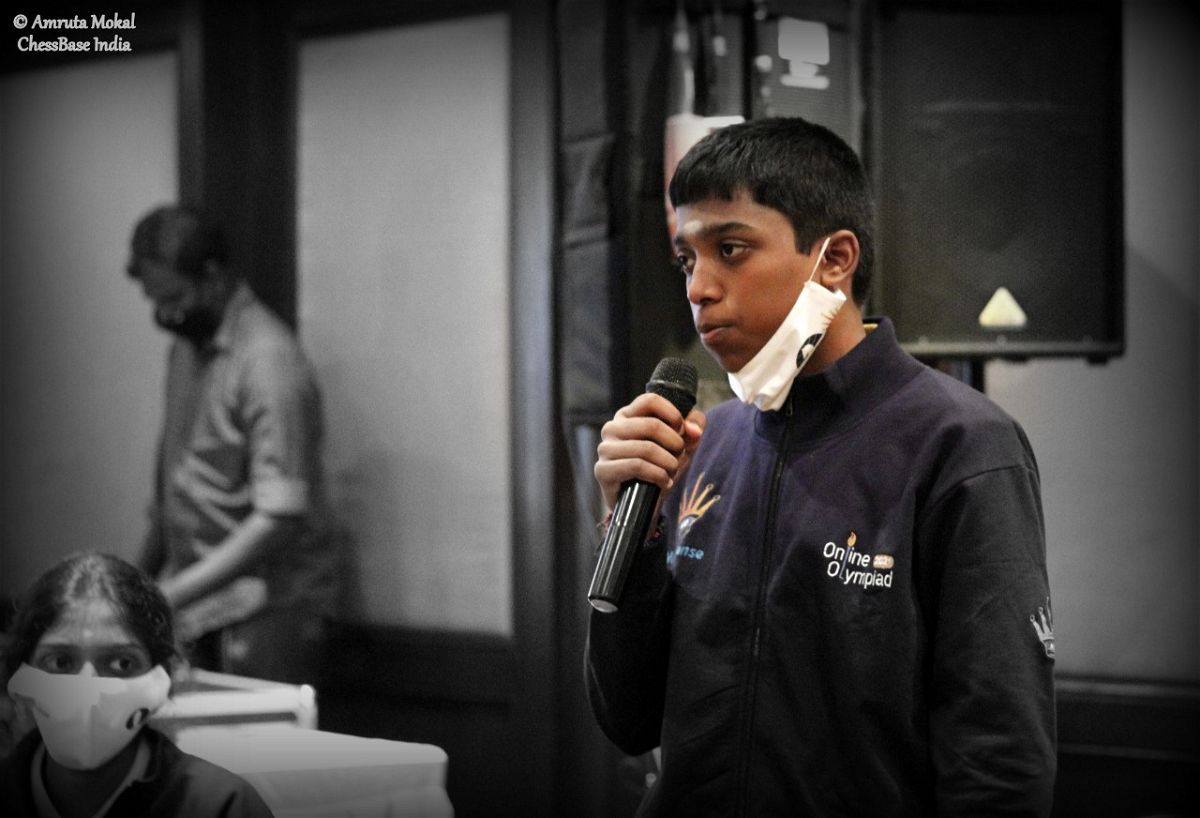 Pragg was very confident during the press conference and gave a great answer! Speaking in public has always been something that Pragg doesn't enjoy so much, but like a true chess players, he is learning from his experiences and improving in this area as well!
This was nicely done by the Taj Team to welcome all the players and journalists for the event
Live footage from the Press conference

Live commentary will be done by IM Sagar Shah, Amruta Mokal from the venue and Samay Raina from his home in Pune.

Round 1 begins from 4.30 p.m. but the livestream will start from 4 p.m.
It will be interesting to see whom India fields on top board in the open section because in all the teams the top board is quite strong - Adly Ahmed, Etienne Bacrot and Nils Grandelius. France and Sweden both have one world class female player as well - Marie Sebag and Pia Cramling. A youngster to watch out for today is Maurizzi Marc Andria from France who is born in 2007 and is already rated 2488 in Classical chess.
The super twelve! | Photo created by Abhyudaya Ram
India's opponents on day 1
On Day 2
On Day 3

On all six days we will also have Live commentary on the ChessBase India Hindi channel by Niklesh Jain.