In modern day chess it is always a question - what should you do when you are facing your opponent's opening preparation? And yes, your opponent is none other than Fabiano Caruana, who has an excellent teams of seconds, great computer hardware for accurate analysis and extremely high chess talent. Of course, you do not want to fight him in his own terrain and hence after Fabiano played 10...Rd8 in the second game of the World Championship Match 2018, Magnus Carlsen went into a less ambitious mode. This helped Caruana to equalize without any difficulty and be on the better side of the draw. After two games the score of the World Championship now stands at 1.0-1.0. We have an overview of the entire game with the help of diagrams and young talent Prithu Gupta has annotated the game.

After the first game of the World Championship Match 2018 ended in 115 moves, one would have imagined both players to be very tired. But, it was quite the contrary. As Fabiano and Magnus mentioned after the second game, they were not at all low on energy. This meant that we saw another fighting game of chess and this time it was Fabiano who came out with the secret goods! 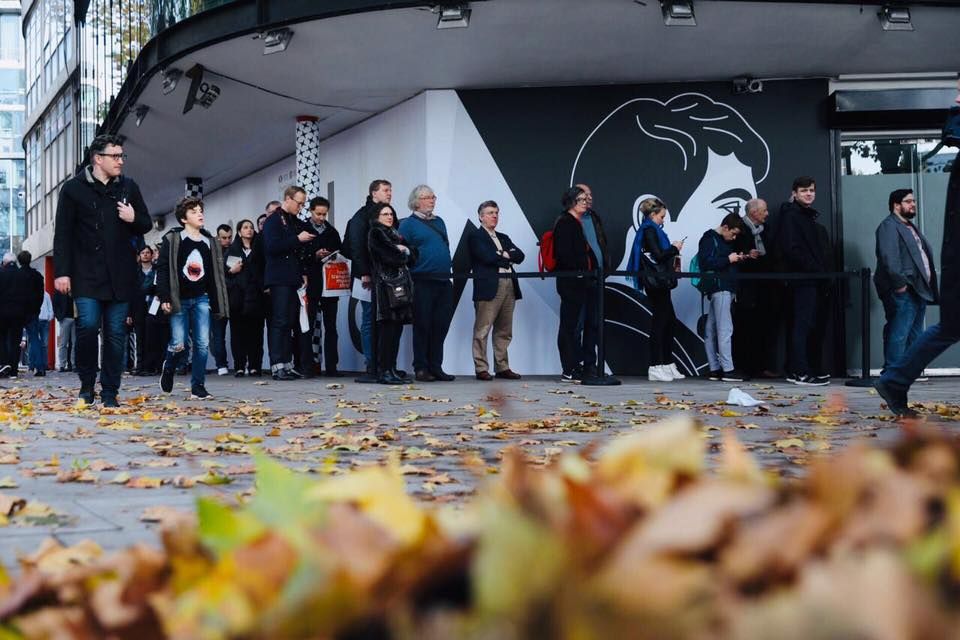 People are waiting to enter the premises of the college in Holborn in London where the tournament is being held! 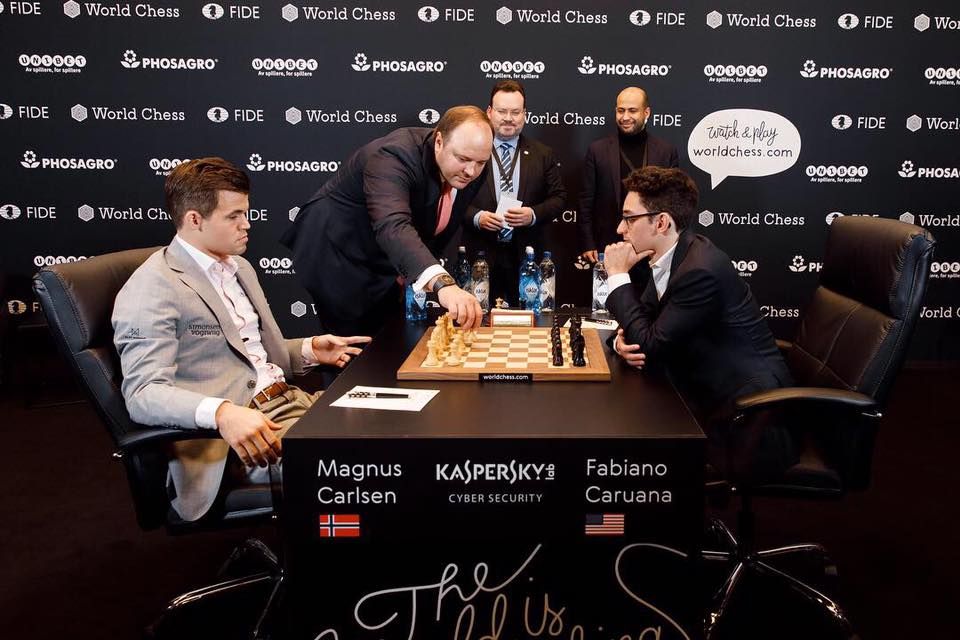 Overview of the game

In game two Fabiano Caruana had the black pieces and Magnus chose 1.d4. One can be pretty much sure that this decision to push the d-pawn had to do a lot with Fabiano's bullet-proof Petroff Defence against 1. 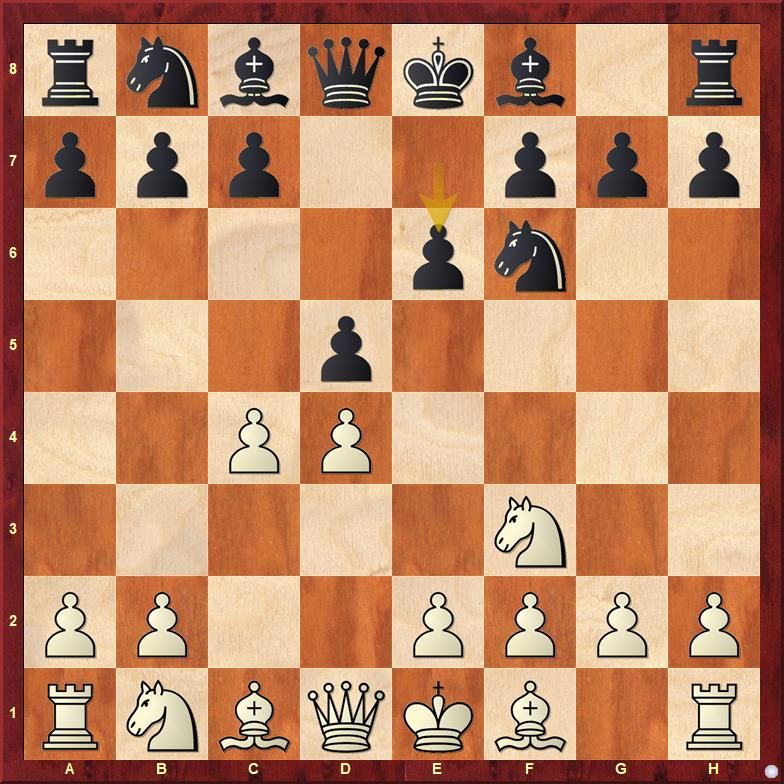 Caruana's choice was the super-solid Queen's Gambit Declined. As Garry Kasparov has mentioned on numerous occasions, there are days in chess when you simply want to go the classical route, which is to play an opening like the Queen's Gambit and slowly equalize with the black pieces! 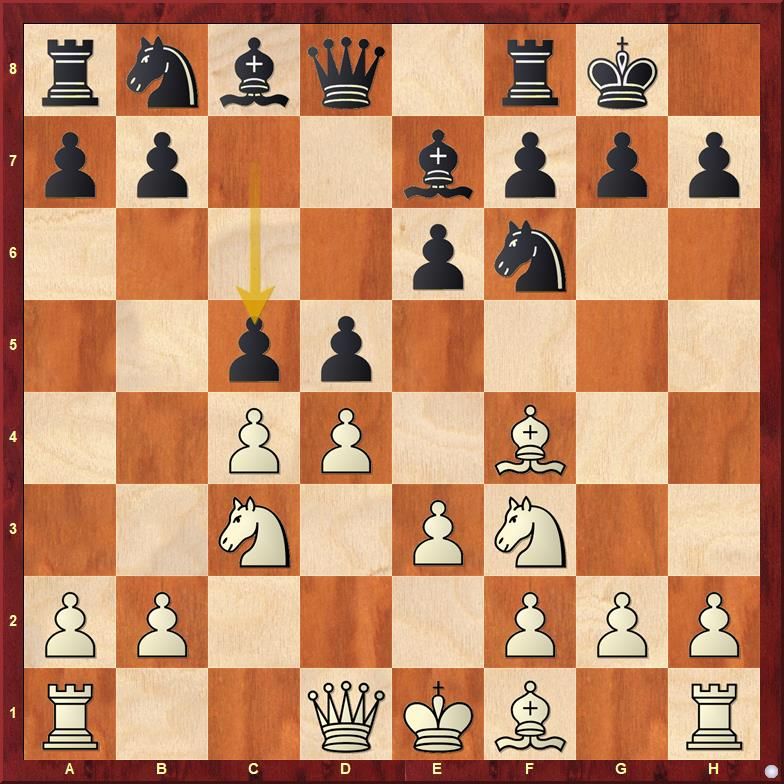 Caruana went for the most solid system with the help of the move 6...c5. Of course, there are more modern ways to play the position with ...Nbd7 or ...b6. But ...c5 is the one that has been played from years and has been played by many of the former World Champions! 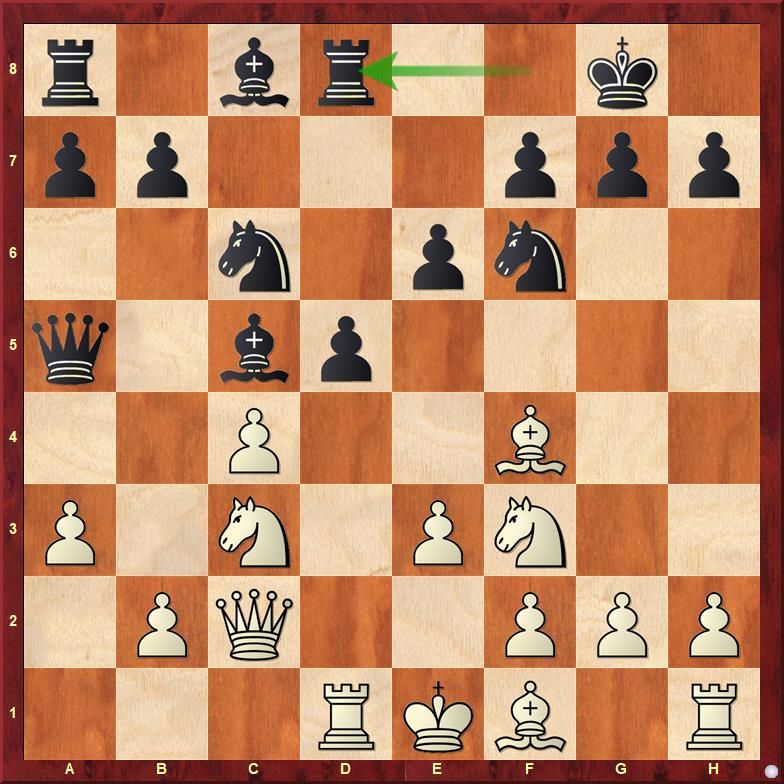 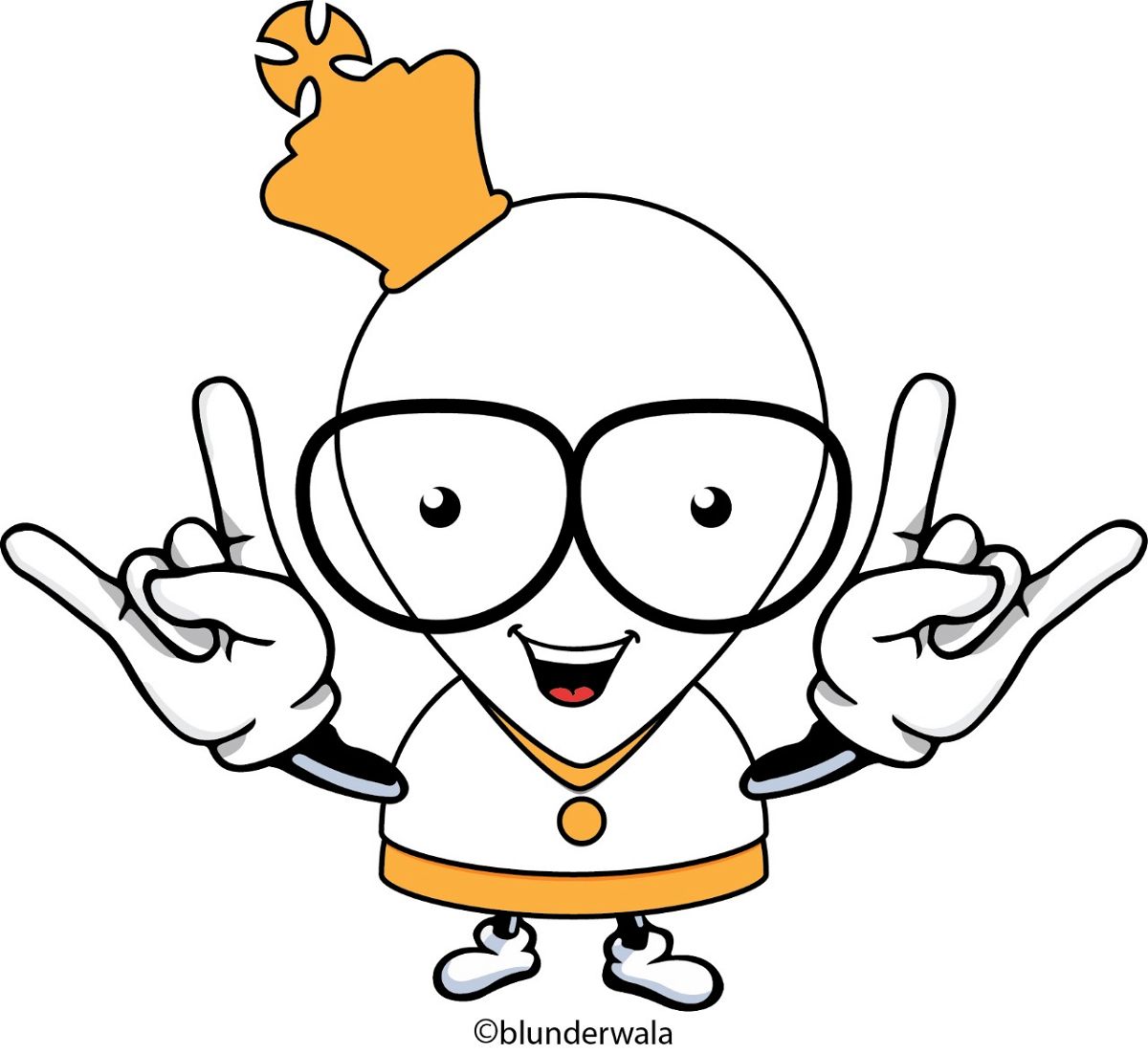 10....Rd8!? The entire game took a turn after this move. Usually in this position Black opts for ...Be7 or ...Re8. But ...Rd8, which is relatively unknown has been played in 50 games before. Carlsen was not really prepared for it as it has been hardly essayed at the top level. The reason why this move changed the path of the game was because Magnus started to take the safe route instead of trying hard to punish Black for attempting this off beat line. The most critical move would have been 11.Nd2. However, Carlsen played 11.Be2 which was not the most ambitious move in the position. As Carlsen mentioned after the game in the post game conference, that his decision was definitely affected by the fact that Caruana was well prepared. "I was not just facing Caruana and the preparation of his seconds, but also the modern day engine analysis." 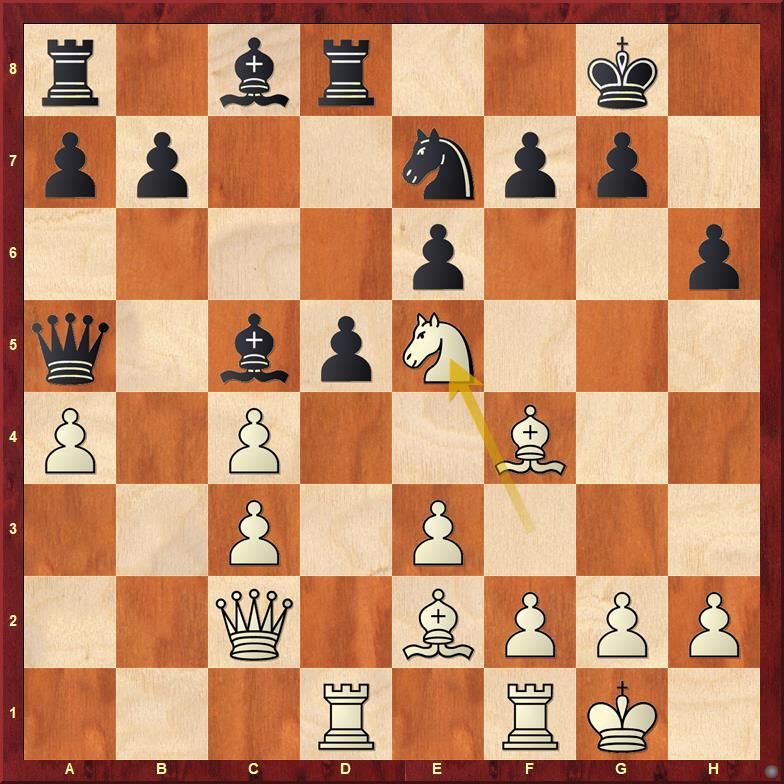 Magnus' Ne5?! was a bad move. The World Champion had missed that Black can play the move ...Bd6! 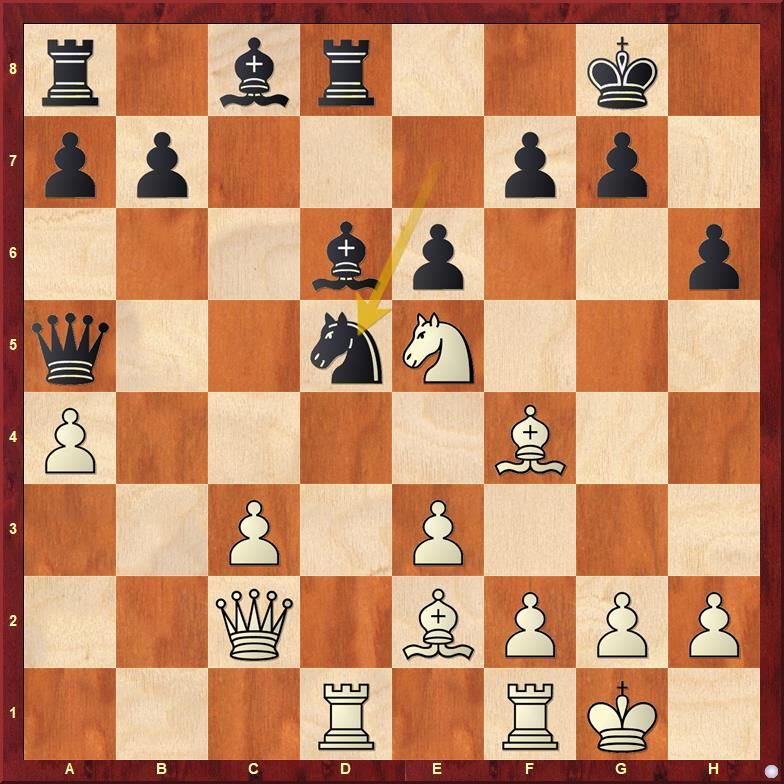 Taking on d5 with Nxd5! also came as a surprise for Carlsen because he thought this was impossible due to Nc4. He had missed ...Qxc3! when after Qxc3 Nxc3 the bishop on e2 would be hanging. In a way after this all of Black's problems were solved. There was a critical idea in the above for White which began with 17.Nxf7!? But Fabiano saw no real attack and was ready to face it over the board. 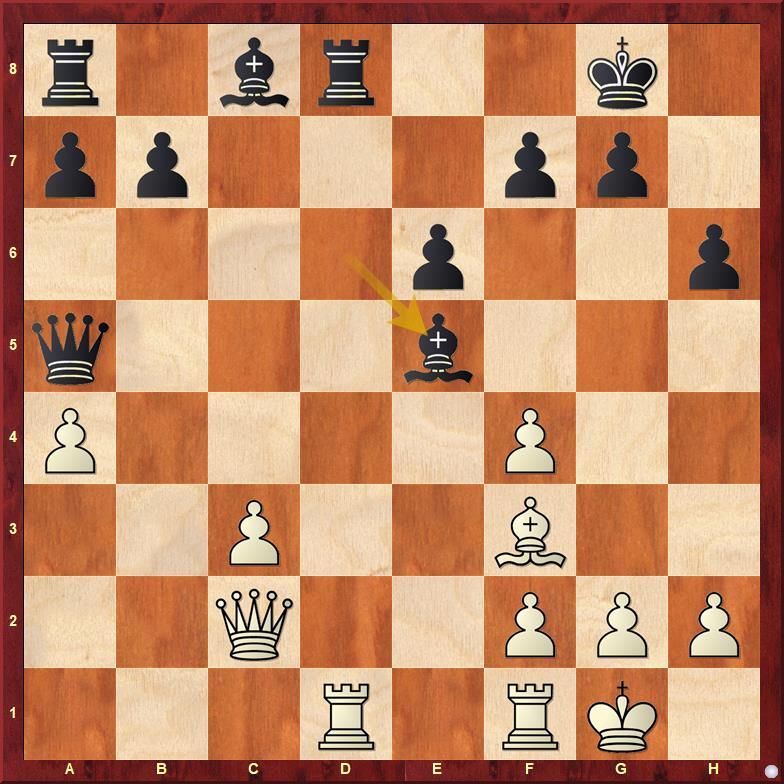 ...Bxe5 is one of those moves which are you happy to make when you are behind in development. The knight on e5 is removed and Black plans to finish his development with ...Bd7. 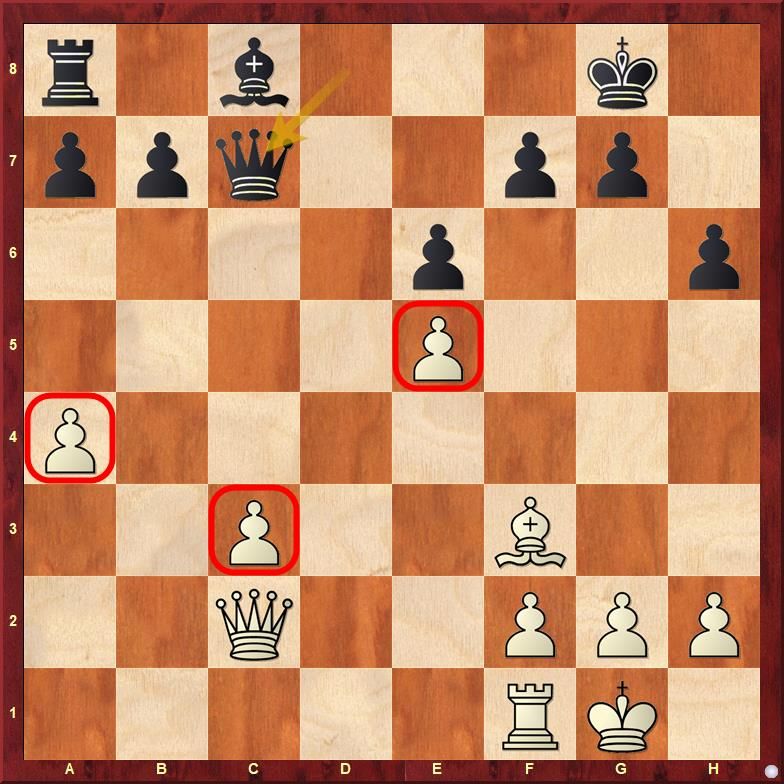 It's true that Magnus is ahead in development, but there is no way for him to breakthrough. On the other hand Caruana is going to play against the weak e, c and a pawns after developing his bishop to d7. Soon the queens came off the board and so did the bishops. The rook endgame was slightly better for Caruana, but he didn't really have any chances to push really hard. Our little annotator, 14-year-old IM Prithu Gupta went deep into one of the lines in the rook endgame and reached the below pawn endgame! 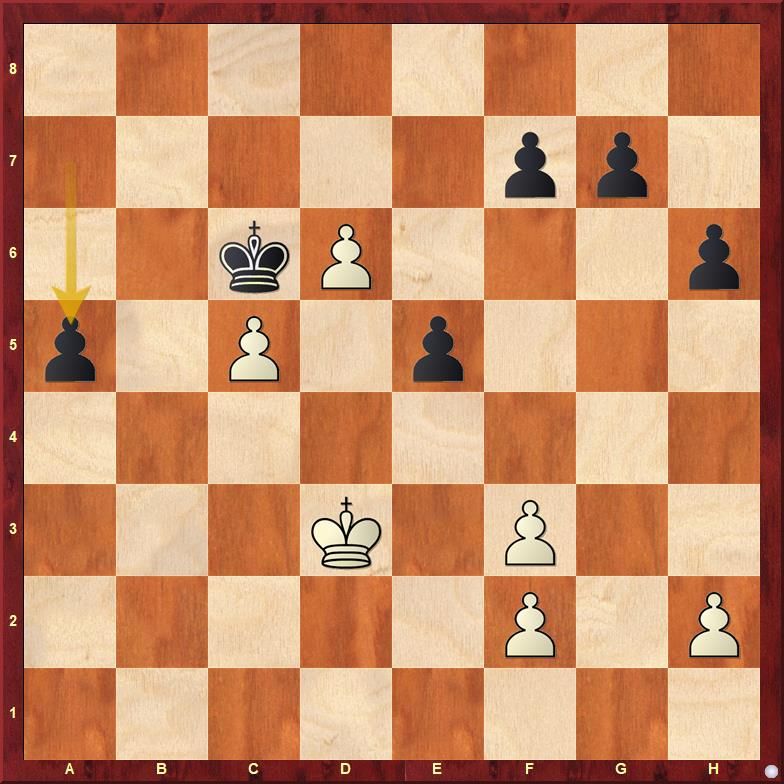 Now that's a mind boggling position! This didn't happen in the game, but could have taken place. Yet, the game is drawn. 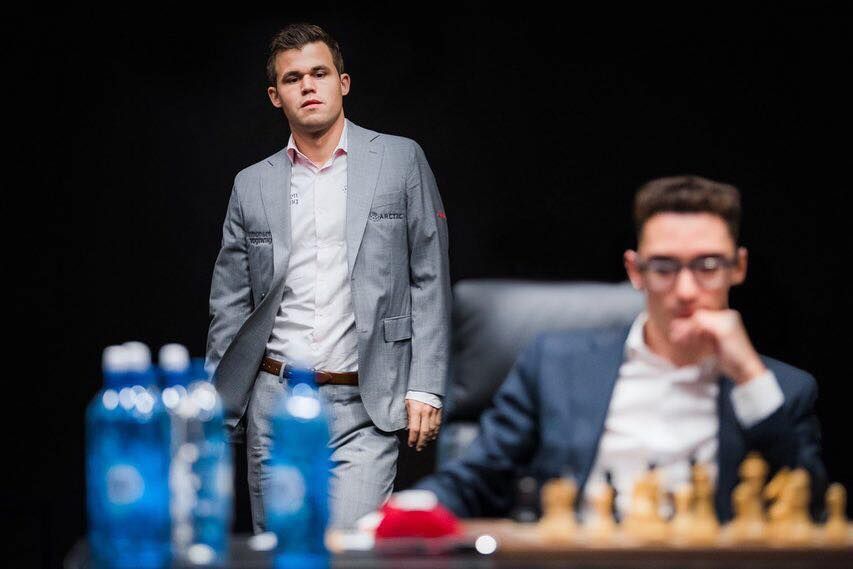 Magnus Carlsen was definitely under some pressure today, but managed to hang on 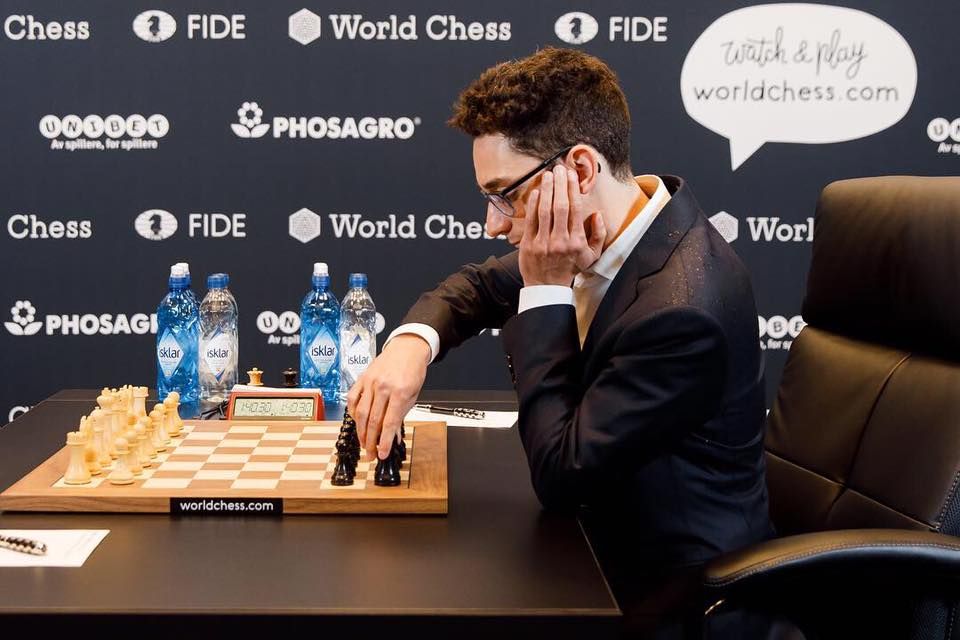 Fabiano Caruana proved in this game that be it white or black, he is ready to push hard for the full point!

Analysis of this game has been done by one of India's rising stars, 14-year-old IM Prithu Gupta. Prithu also has two GM norms and is a very meticulous annotator. We are sure that from his notes you are bound to learn a lot. 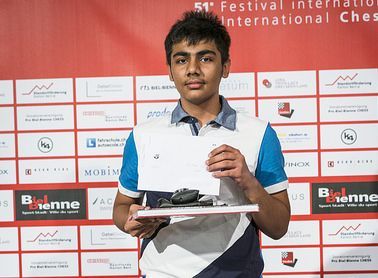 Our guest annotator for the second game is the future star of Indian chess IM Prithu Gupta!