This edition of CBIJ brings to you the news from the north - the girl who won't back down, Meenal Gupta. She lives in Jammu and Kashmir, which is currently going through a rough patch with the Pulwama attack, a terrorist attack resulting in the loss of 40 Indian soldiers. Such attacks put risks on the lives of the people living there, praying for their lives at every minute. This is a story of a girl who let none of that get in her way. In fact, when it comes to chess, most people prefer to move out of her way! Get to know more about her and how she is able to sustain her passion overcoming all of the difficulties that come in her path. A detailed, pictorial report.

When I was writing this article I heard about the shocking Pulwama attack. Jammu and Kashmir, as you must be knowing, is terrorist blazed, and is faced with unrest at the moment. There is an everlasting tension at the border, the crown of India, which has already seen many shootouts in the past. The Pulwama attack was another tragedy caused by the same, where more than 40 brave jawans were killed by a suicide bomber.

It was an unexpected attack and people in the region and all across India have been stunned by this brutal strike. Many people living there are at risk, and are constantly in fear of another attack. Imagine their case, where they are praying for their lives every day, every night. Forget pursuing their dreams, they are in fear of simply walking from home to school, such is the situation. By this point many would given up on any dreams. However, there are a few who are relentless, and won't stop at that. 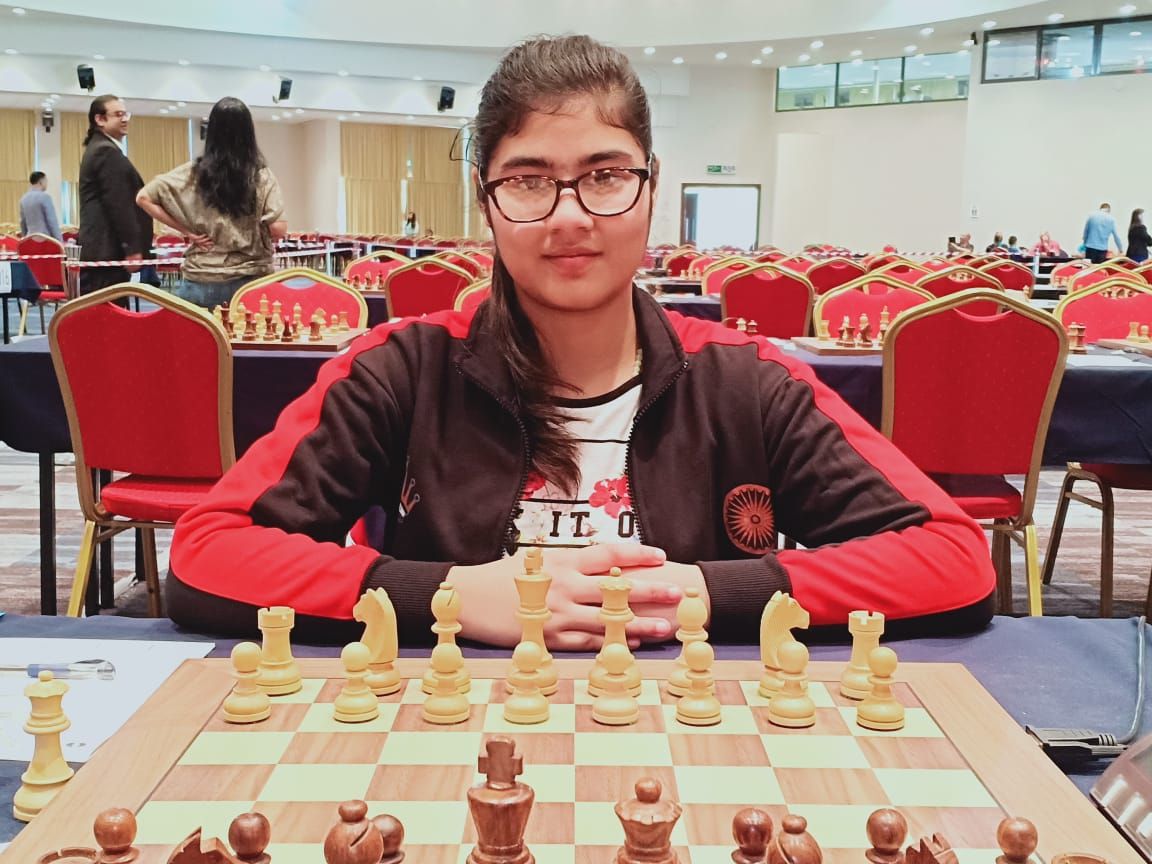 Meenal Gupta, the young talent from Jammu and Kashmir

Meenal Gupta is one of the star chess players of Jammu and Kashmir, and she hasn't let any of this daunt or halt her progress in any way. She has been playing from the past 6-7 years, and she is rated 1878. She is a regular Commonwealth medalist, and doesn’t plan to let anything get in her way to the top. Let us hear what she has to say:

“In other sports you need to have certain qualities, but in chess you need all of them, such as focus, physical fitness, etc. Otherwise, how will you concentrate on the game? You have to sit for nearly 4 to 5 hours, you need the strength to endure it. It will make me a better person because of this and I know it will.” 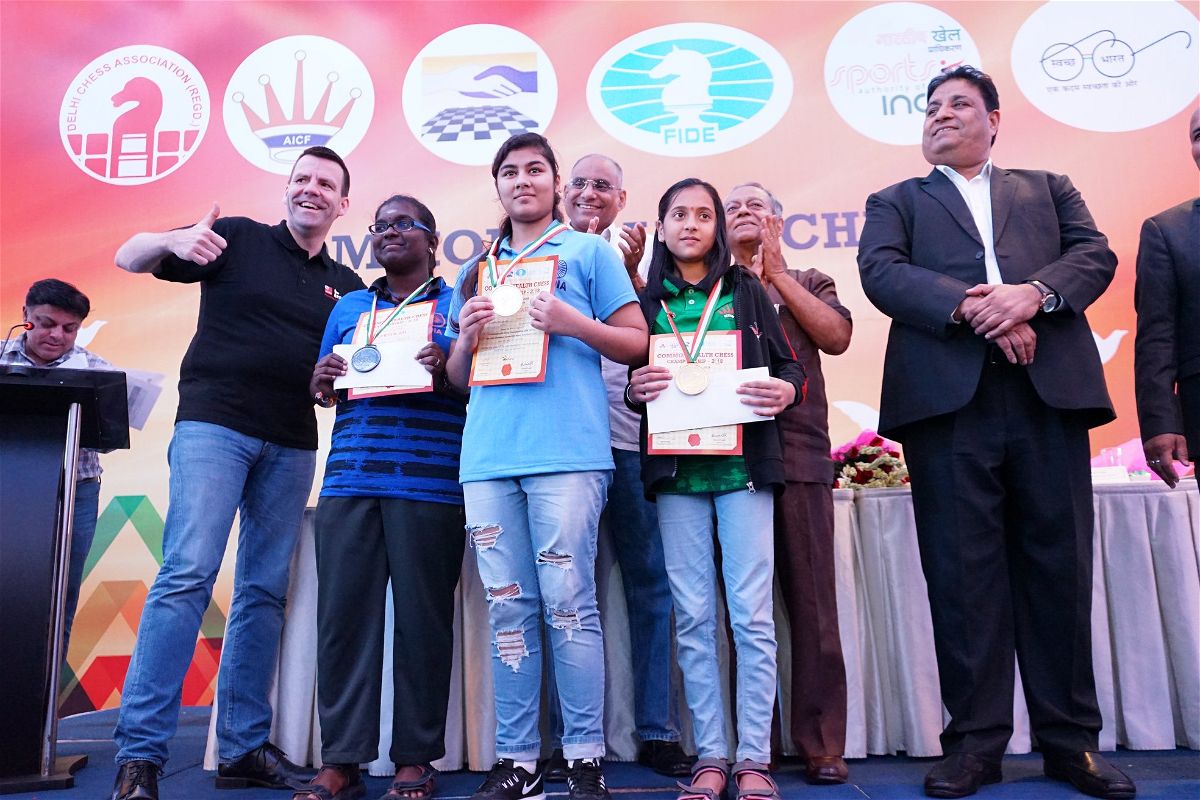 Habitual Commonwealth medalist and this is the latest in her kitty! | Meenal Gupta (center), photo: Amruta Mokal

She won the Commonwealth Gold medal in 2016, and a silver medal last year. She plans to bag a medal this year as well. When asked which was her favourite place, she replied that it was Bangkok. Meenal goes there every year, and it turns out ending well for her every time! 'It is kind of superstitious, bur I think Bangkok is my lucky place!' said Meenal.

Meenal is the more aggressive type of player, preferring dynamic positions and uncompromising chess. According to her there are two reasons for this, the first being that she is usually an impatient person. Surprising for a chess player, but probably the reason why fast is her forte. When questioned about this, she replied that timing, in chess and in general, is very crucial to anticipate what happens next. You have to be patient, and wait for the right time, and not make any decisions in haste. She is trying to keep her speed and at the same time ensure that she is patient and thinks hard at the right moments. Oh, and the other reason? Meenal's idols are Garry Kasparov and Judit Polgar; she would spend a day with either of them, given the chance to spend it with anyone in the world. The signs of a true chess player!

Her best game was against IM Navin Kanna TU at Mumbai Mayor's Cup this year, where Meenal was black and played brilliantly throughout, especially the second half. Have a look at it below:

Look at the way Meenal played the endgame! Don't you think it was admirable? 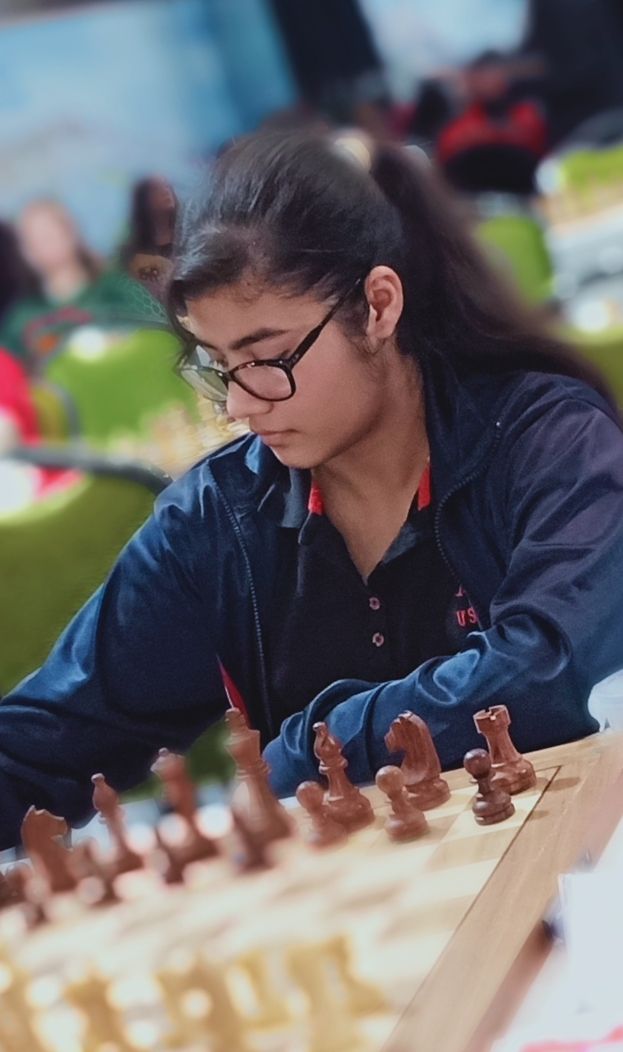 Apart from chess, Meenal Gupta is an all rounder: She likes badminton, golf, swimming, cricket. One of her passions is also painting, as well as music. and writing down her thoughts. What better way to spend the time than the way Meenal does, learning as much as possible in a varied experience! Her father Atul Kumar Gupta, who is also the Secretary of Jammu Kashmir Chess Association, is the main support for her activities. He also took loans to finance Meenal's chess. He also gives helpful advice to Meenal, helping her morally and psychologically. One piece of advice from him, not specific to chess, is, "Chess preparation is indeed important, but so is physical fitness. If you are physically fit, everything turns in your favour." How true is that!

The father Atul Kumar is tremendously keen that her daughter Meenal does well in chess!

There are many kids just like Meenal in J&K who are pursuing something, something they want to accomplish. Talking about the political scenario Meenal says,

“I try not to focus on that because it distracts me from my game. Instead I try to improve my game. I am not expecting anything from the government; if yes then good, if not, then not a problem. I don’t like to think, ‘if they support me in some way, only then I can improve.’”

It goes to show just how much the players are willing to do something, and make sure that nothing stops them or halts their progress. They are on edge at all times for anything that could happen. It is a difficult time with the ongoing issues, and yet they are fearless and couldn't care less about the dangers. Anne Frank's quote sums it up perfectly:

"It’s utterly impossible for me to build my life on a foundation of chaos, suffering and death. I see the world being slowly transformed into a wilderness, I hear the approaching thunder that, one day, will destroy us too, I feel the suffering of millions. And yet, when I look up at the sky, I somehow feel that everything will change for the better, that this cruelty will end, that peace and tranquility will return once more." We too hope so.

And these kids are the gems of sports, the same way Kashmir is the gem of India. ChessBase India wholeheartedly wishes Meenal the best of luck in all her endeavors.

Past coverage by ChessBase India on Meenal Gupta:

Avathanshu Bhat has been writing about chess for well over a year now. He has published innumerable articles on ChessBase India and his reports have been well received by the audience. He is the editor-in-chief of ChessBase India Juniors. His main intention is to bring the best junior players of our country into the limelight with his writings. Here is some of the work he has done in the past: