Nihal Sarin is currently playing in the Anatoly Karpov Trophy 2019 which is taking place from the 25th of October to the 1st of November in Cap d'Agde, France. The tournament consists of two parts. It begins as an eight-player rapid double round-robin but after the completion of fourteen rounds the top four go on to play two-game knockout semi-finals and a final. Nihal is incidentally the last seed of the event with a rapid rating of just 2285. Obviously this figure doesn't reflect the true strength of the youngster as he has already displayed some very steady chess to emerge as one of the four leaders at the end of six rounds with 4.0/6 points. Etienne Bacrot, Hou Yifan, and Amin Bassem - all 2600+ rated strong rapid players - are others who share the lead with the same score. In this consolidated report on rounds one to six of the tournament we give you a comprehensive overview of Nihal's performance so far.

The 17th Edition of Anatoly Karpov Trophy is being held from the 25th of October to the 1st of November in the beautiful Mediterranean town of Cap d'Agde. There are eight players competing against each other in rapid format following a time control of twenty minutes for the entire game plus ten seconds increment per move starting from move one. The outcome of the first fourteen games will determine the four players (top four) who will thereafter fight it out in the knockout part of the tournament. The players and their starting ranks are given as follows:

The games are taking place in the now famous arena of the Molière room of the CCAS holiday residence. Interestingly, Nihal Sarin started the event as the lowest rated player in the field having a rapid rating of only 2285. However, the fact that this figure is far below the Indian's actual playing strength has become clearly evident in the first six rounds where the fifteen-year-old has shown some top class rapid play. 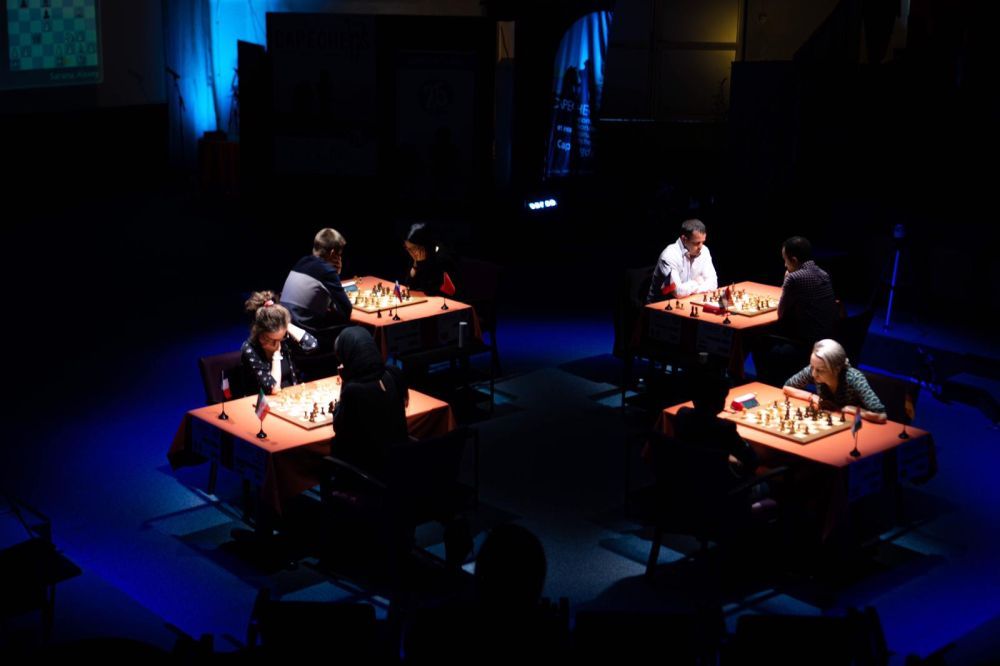 The playing hall looks quite intense and interesting | Photo: Capechecs

The first round of the event itself started with a shock as the strong Egyptian Grandmaster and second seed of the event went down against Elisabeth Paehtz of Germany. Nihal too began with an emphatic win against Marie Sebag of France with the white pieces. Marie, who is a 2452-rated Grandmaster, defended well in a miscellaneous sideline of the queen's pawn opening and entered into an even rook-pawn ending but just when things seemed to be fizzling out into a draw, she erred around move 36 giving away full control of the open d-file to her opponent. Nihal seized his opportunity with both hands, infiltrated the kingside with his rook via the d-file, and not long after found a winning passed f-pawn. The game was resigned by the French player on move 55.

After drawing against Elisabeth Paehtz in Round 2, Nihal once again proved his mettle by defeating the top rated player of the event Etienne Bacrot with black pieces in the third round. Bacrot had found a tangible initiative against Nihal by move 28 in this encounter but he squandered away his chances in the next few moves and the game returned back to equality. Next, on move 34 he made a premature pawn push which suddenly started to tilt the position in Black's favour. The final mistake was however 37.d4? which allowed the Indian to completely turn the tables with the tactical 37.Rxa3!! 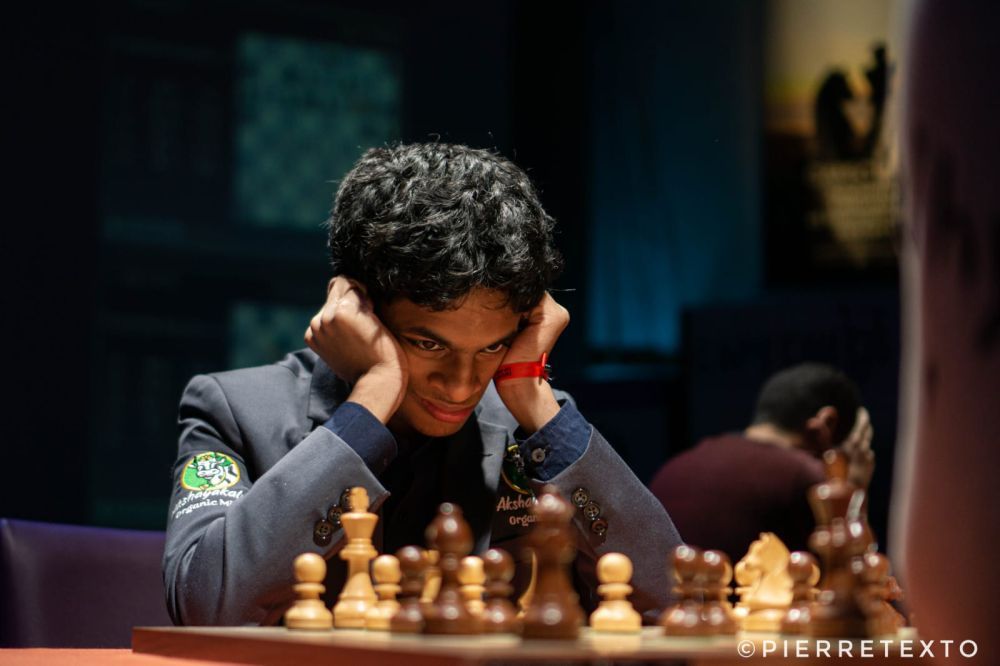 In the very next round (round four) Nihal had to suffer a setback in the hands of Hou Yifan of China. Although in this occasion the story was entirely reversed - it was the Indian with the white pieces who found a large advantage quite early in the game and by move 23 was clearly dominating. But slowly things started to go awry for him, he first blundered on move 26 to blow away his initiative and then after a long struggle erred again around the 50th move to lose the encounter.

Nihal drew his sixth round game against Alexey Sarana but before that in round five registered a crushing victory with black pieces against Sarasadat Khademalsharieh of Iran. This was a King's Indian Defense fianchetto variation and the Indian started to push for the advantage after move 19 when Sarasadat missed a strong continuation for herself. 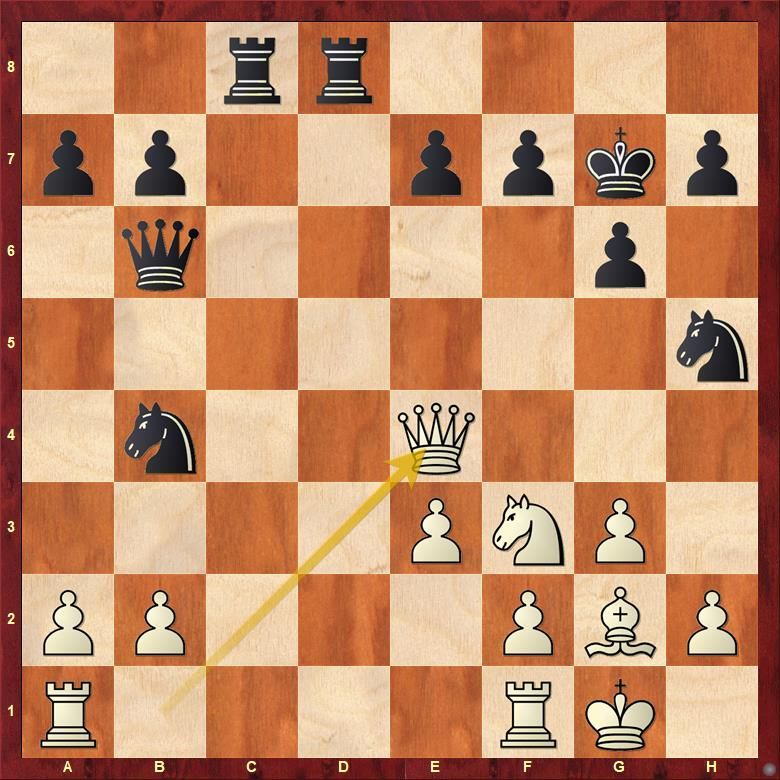 Black already had better play at this point with his excellent rooks on open c and d-files but 24.Qe4 allowed the h5 knight too to bounce back in the game with a tempo. After 24...Nf6 25.Qh4 Rc2! White was clearly subdued. 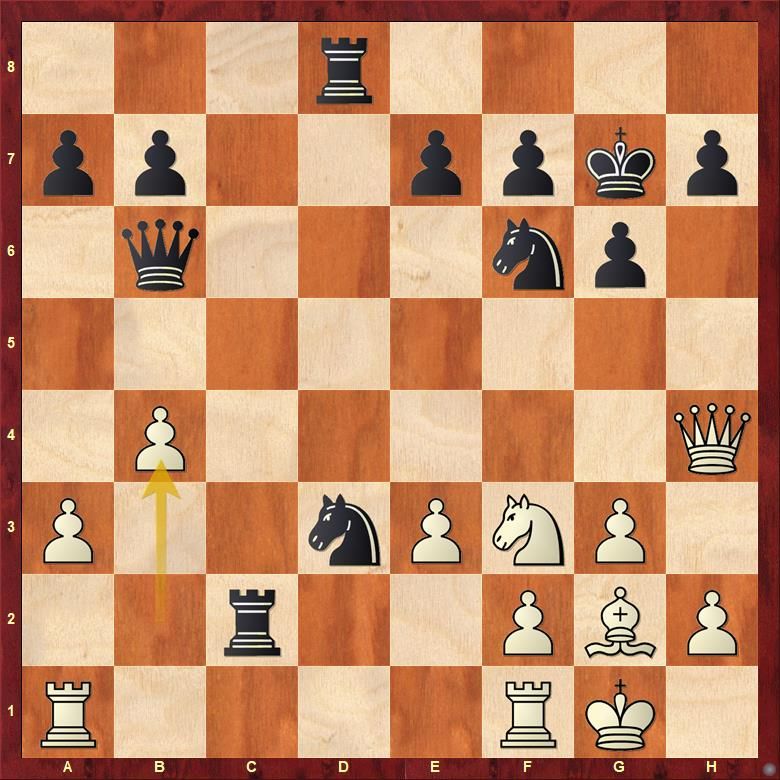 27.b4? was the final blunder in the game. Can you guess how Nihal finished off from here? See the full game below.