Abu Dhabi 2019 Round 8: Jobava wins again, Karthikeyan slips in the penultimate round

In the penultimate round of the 26th Abu Dhabi Chess Masters 2019 Karthikeyan Murali ended up losing to GM Yakubboev Nodirbek. It was a highly complex game in King's Indian defense where the Indian Grandmaster made a series of inexplicable errors handing over his winning advantage to the Uzbek player. Karthikeyan has thus slipped to the 11th place on the rank-list with 5.5/8. On the other hand, the in-form leader Baadur Jobava resumed his stellar run as he registered yet another victory against the polish Grandmaster Mateusz Bartel. In this report we bring you analysis, photos, and more.

Jobava back to winning! 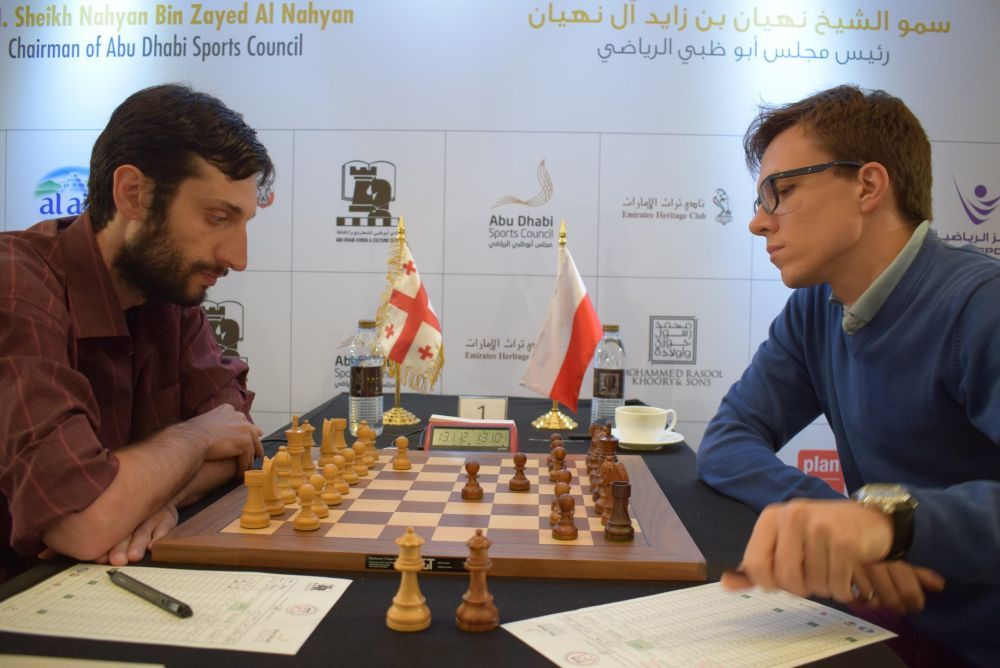 After drawing against Ni Hua in the previous round, Baadur Jobava is back with his killing spree as he registered yet another victory in round eight against Mateusz Bartel | Photo: Rupali Mullick

It is interesting to note that around the year of 2012 Baadur Jobava's rating peaked to a massive 2734, only a stint of bad performances recently has brought him down into the 2500s on the Elo scale. However, in this ongoing Abu Dhabi Masters he has proven with his phenomenal domination that that's not his true strength. The Georgian Grandmaster won all his games in the first six rounds and now, after just one draw in the seventh round, is back with the victory rampage! The latest casualty being Bartel Mateusz from Poland. In this game Jobava opened with 1.b3 - the Nimzo-Larsen - and then opted for an unusual double fianchetto set-up. Let's begin by looking at the highlights of this game! 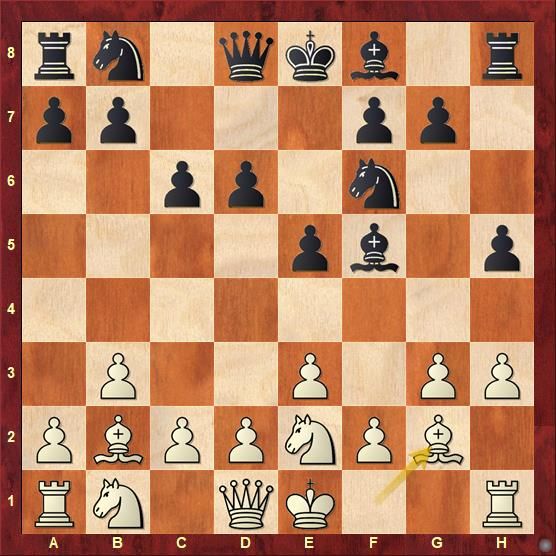 Position after 7.Bg2: A fresh game after just seven moves! Black played 7...Be4 here and the light-squared bishops were traded off, things were totally equal at this point. 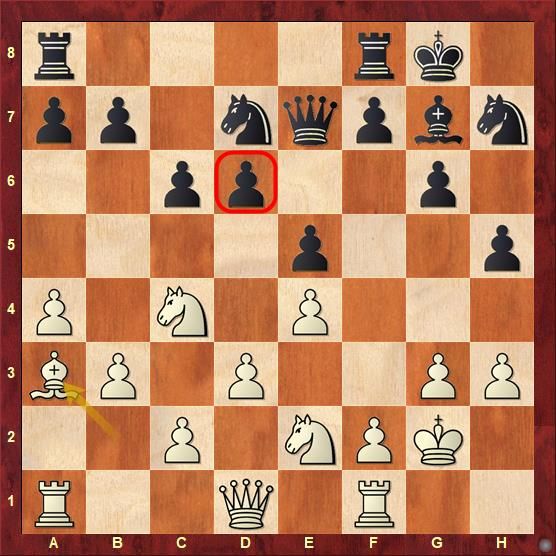 White's 16.Ba3 was an attempt to put more pressure on d6. The next step was pushing b4-b5 and opening up the b-file. 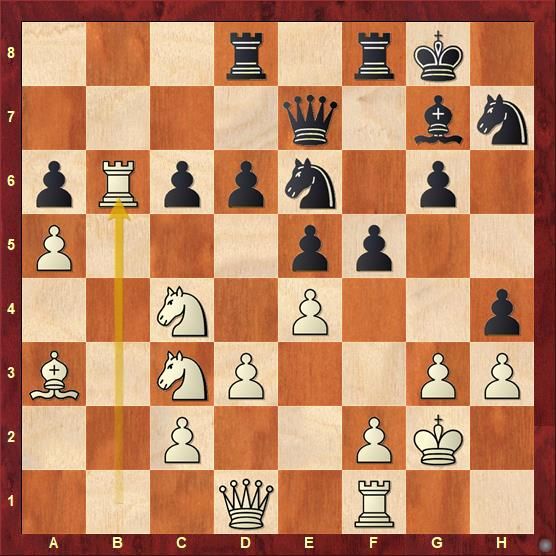 White's position started to look good around here with pressure building up along the sixth rank. 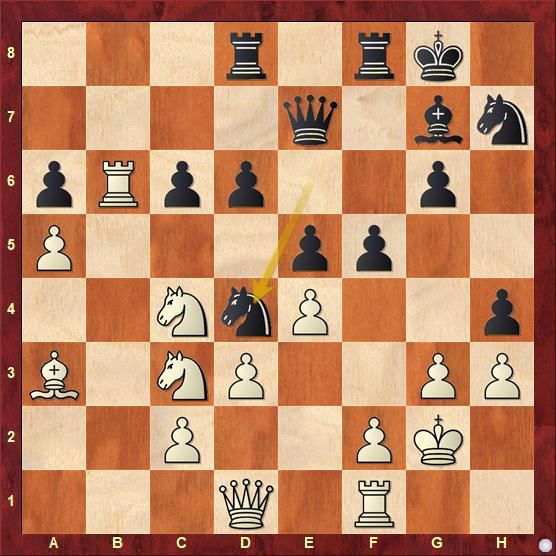 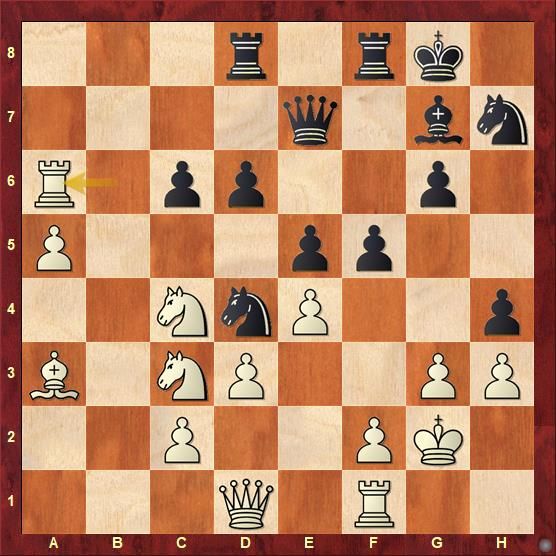 24.Rxa6 was an imprecision by Jobava, 24.Nxd6 would have been more punishing. 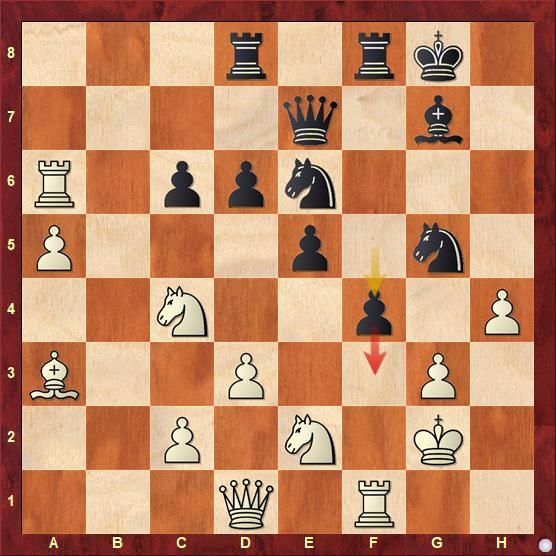 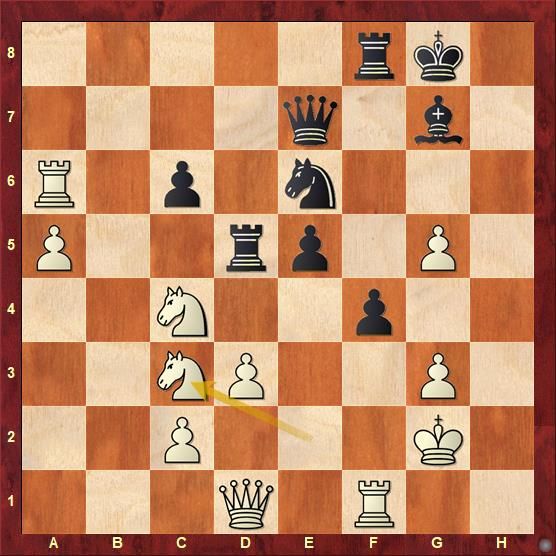 This was a critical moment in the game. 31...e4! would have been the best move here, the point being after 32.Nxd5 f3+ Black has excellent counterplay. In the game however 31...Nxg5 was played and this was a blunder. 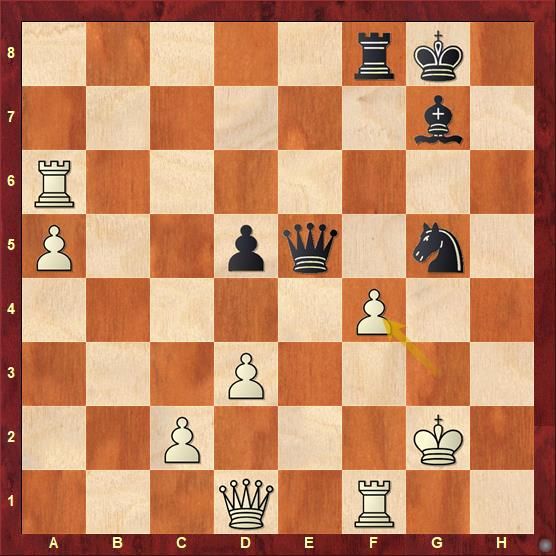 Black's counterplay on the kingside just fizzled out and suddenly White's passed a-pawn started to look menacing. Rxf4 Ra8+ Bf8 a6 for instance looks devastating. In the game Qf5 was played which only quickened matters for White, allowing Qh5 followed by Rg6! 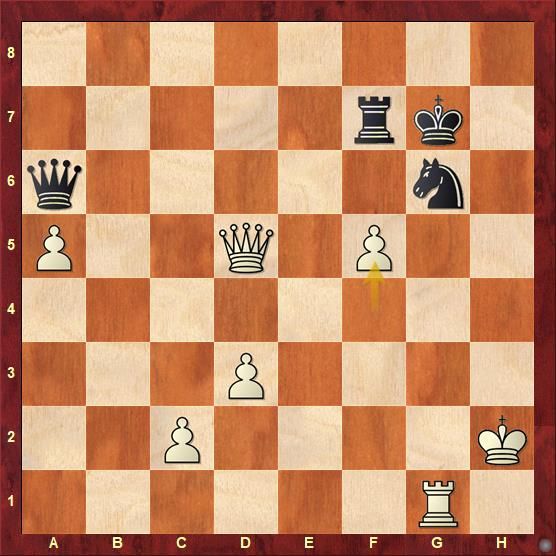 With the move 42.f5 Black had to call it a day. There was no way to stop the torrent of pawns! 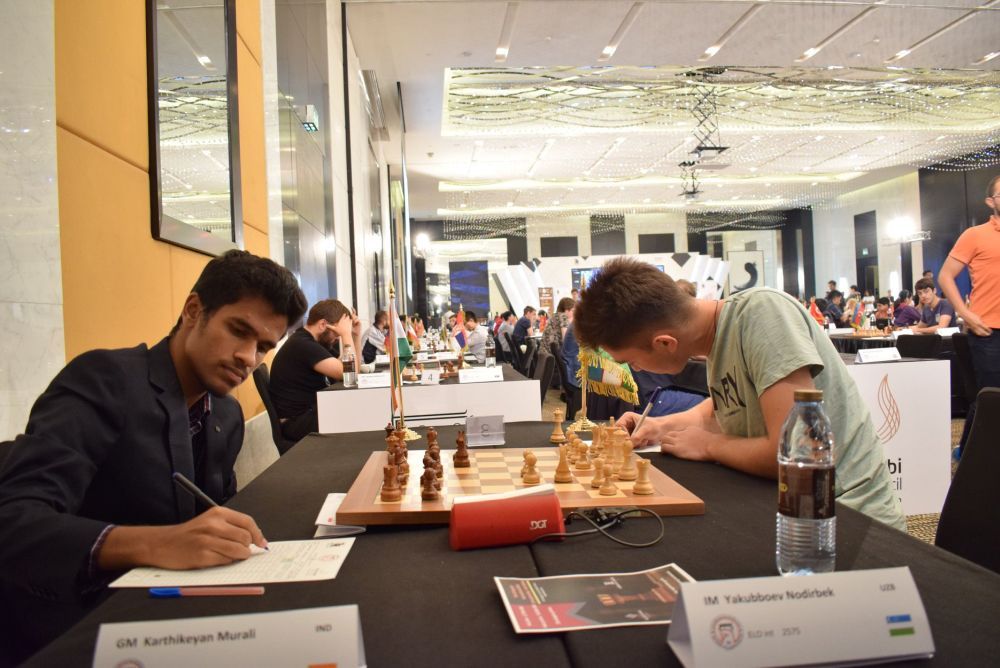 Karthikeyan Murali suffered a loss in the eighth round against Yakubboev Nodirbek of Uzbekistan. It was an intensely complicated game in King's Indian Classical variation where the Indian Grandmaster even had a decisive edge at one point but a series of mistakes towards the end ultimately turned the tables on him | Photo: Rupali Mullick 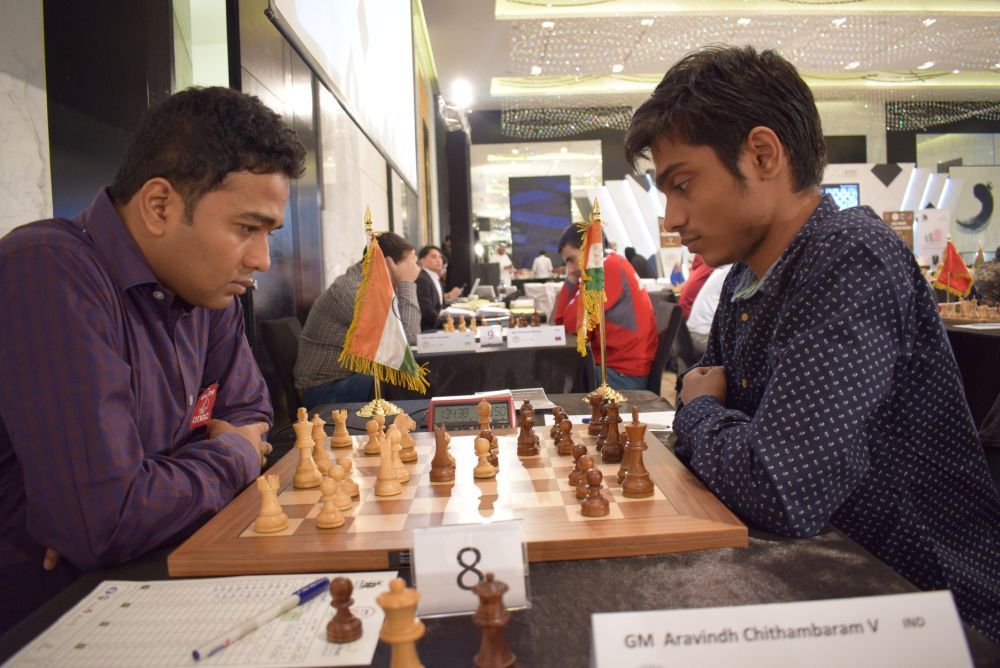 One of the most anticipated encounters of round eight was Deep Sengupta versus Aravindh Chithambaram. The game ended in a draw after a gruelling 72 moves long battle in the Italian | Photo: Rupali Mullick 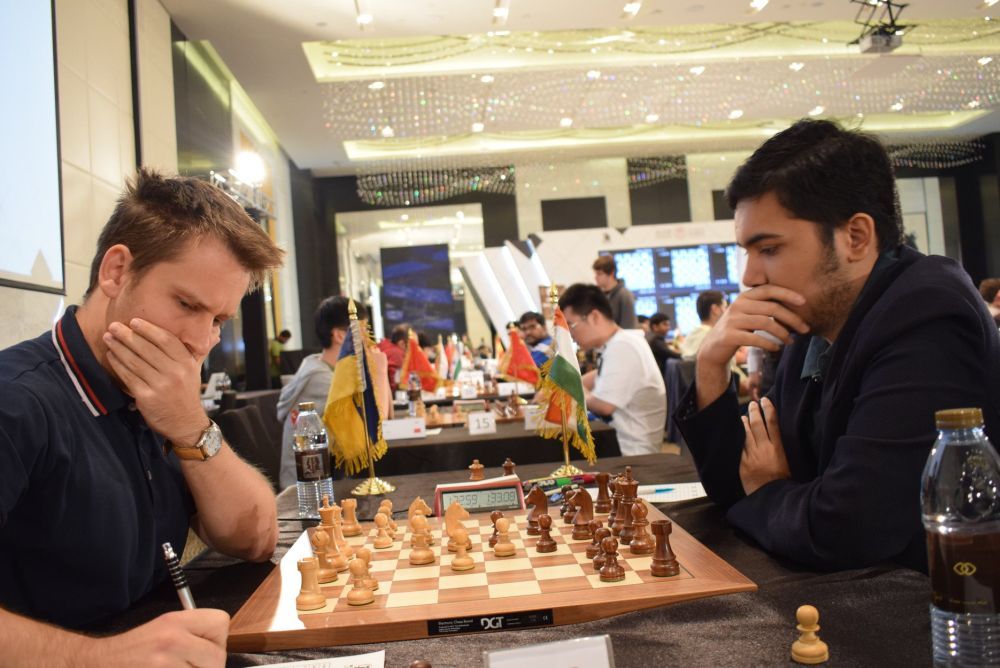 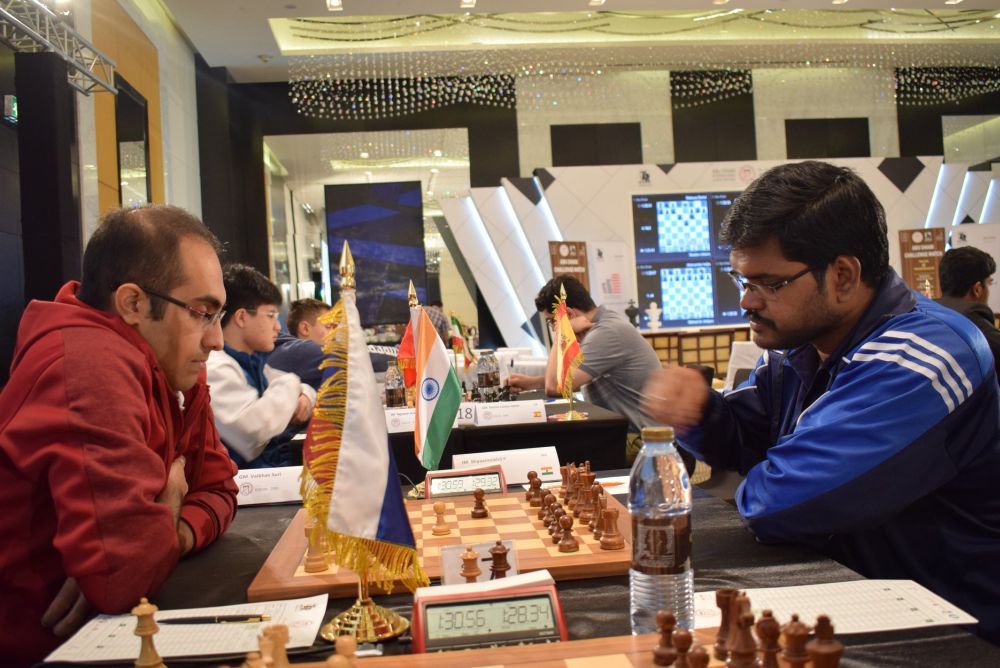 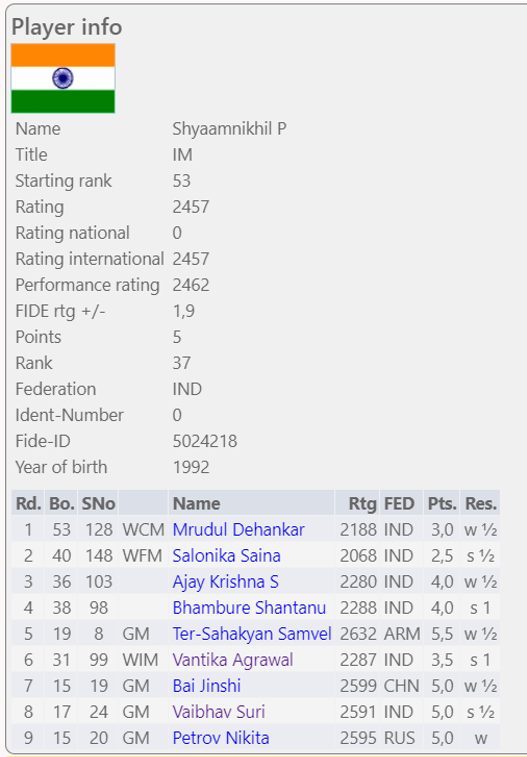 Shyamnikhil has been incredibly solid in the tournament. Not losing a single game and holding Grandmasters like Samvel Ter-Sahakyan and Bai Jinshi to draws! 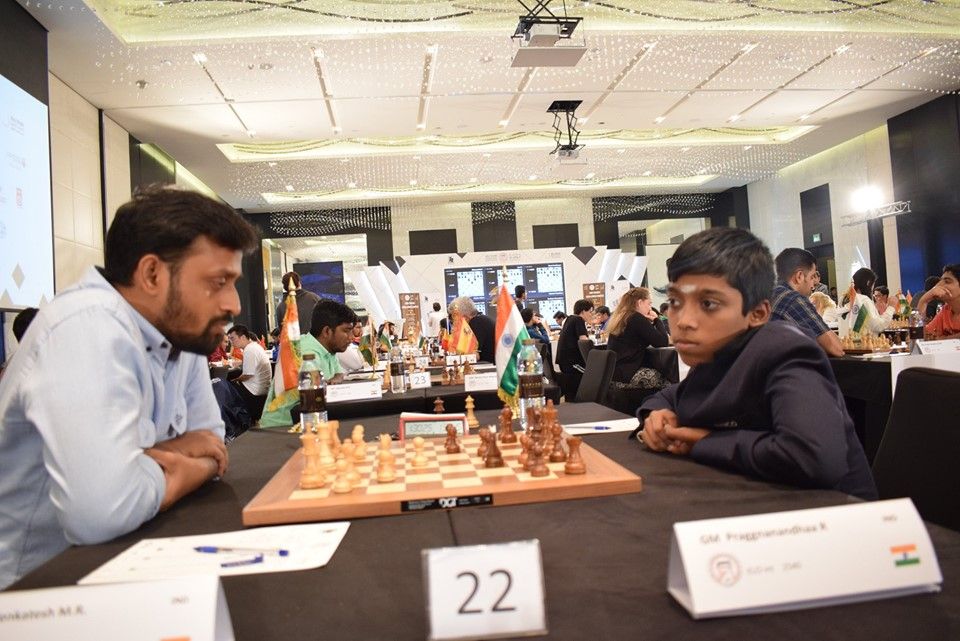 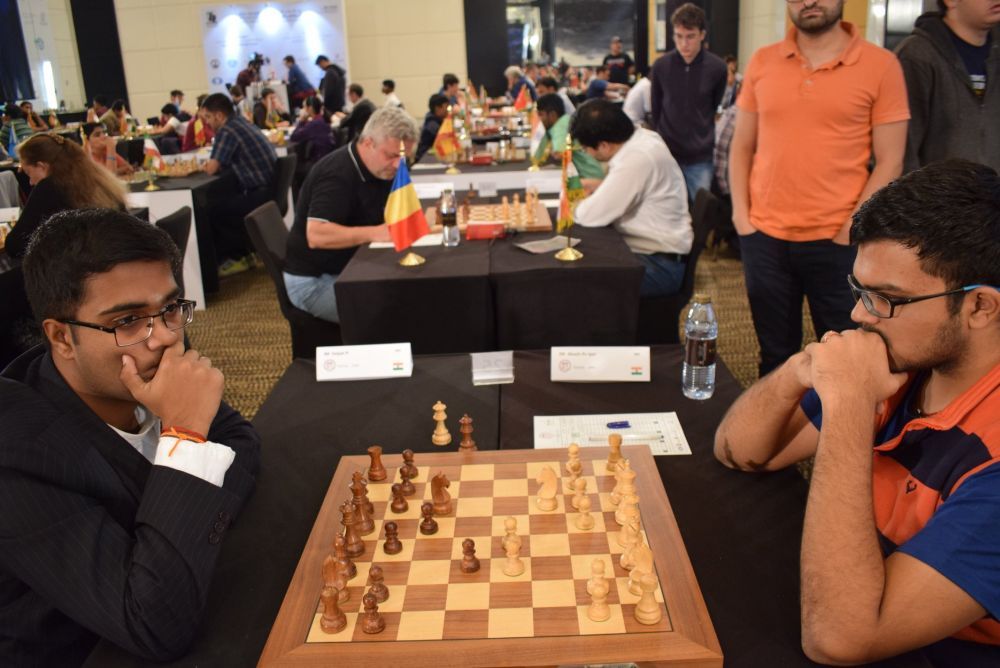 The final round of the event begins today (10th August) at 11:30 a.m IST. You can follow it live on the official YouTube channel of Abu Dhabi Chess.