Can India win the silver at the World Teams 2019?

Indian team is currently in second place at the World Team Championships 2019. It has gone through some serious ups and downs, but has managed to not lose even a single match. In just about every match a different player has taken the responsibility to ensure that the team does well. Adhiban has been rock solid on board one with 5.5/8. But the monster scorer has been Surya Sekhar Ganguly who is on 6.5/8 with a rating performance of 2863! Sethuraman has done his job on board four with 5.0/7. Sasikiran has been off colour in the event with 2.5/7. He has been rested for the last round against Russia. The Russian team with 14.0/16 match points have already won the gold, but for India the match is extremely important. A win here would ensure a silver medal.

First lets have a look at the standings after eight rounds:

Russia with 14/16 has already won the gold medal. But the fight for the silver and bronze medal is exciting. England and India have the same match points, but when it comes to board points, we have three more. This means that if the match points are tied, India will have a huge advantage over not just England, but also China, who is placed fourth right now. China and England are both facing relatively easy teams in the form of Kazakhstan and Sweden respectively. While upsets cannot be ruled out, it seems highly probable that both England and China will win their last round matches and move to 13 and 12 match points respectively. India, who is on 11 right now will have to score, or else we will be relegated to the fourth spot. If we win the match against Russia we can be assured of the silver, while if we draw, then a bronze seems most likely.

If you look at the individual performances of the players, you realize that three players have contributed heavily towards our team's success. Adhiban has been extremely solid on board one. He is unbeaten with 5.5/8. While Sethuraman has taken care of board four with 5.0/7 performance. If there is someone who has played much better than what he was expected to, it is Surya Sekhar Ganguly. The GM from Kolkata has scored 6.5/8 with five wins, gaining 22 Elo points and a performance of 2863. 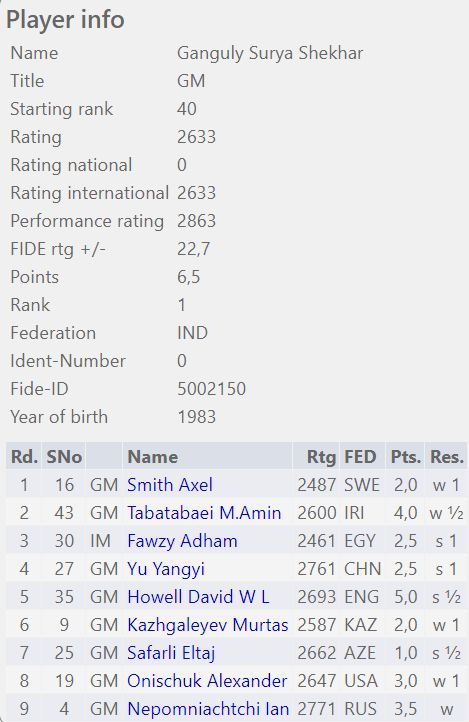 Wins against Yu Yangyi, Murtas Kazhgalayev and Alexander Onischuk has helped Surya to put up one of the best performances of his chess career 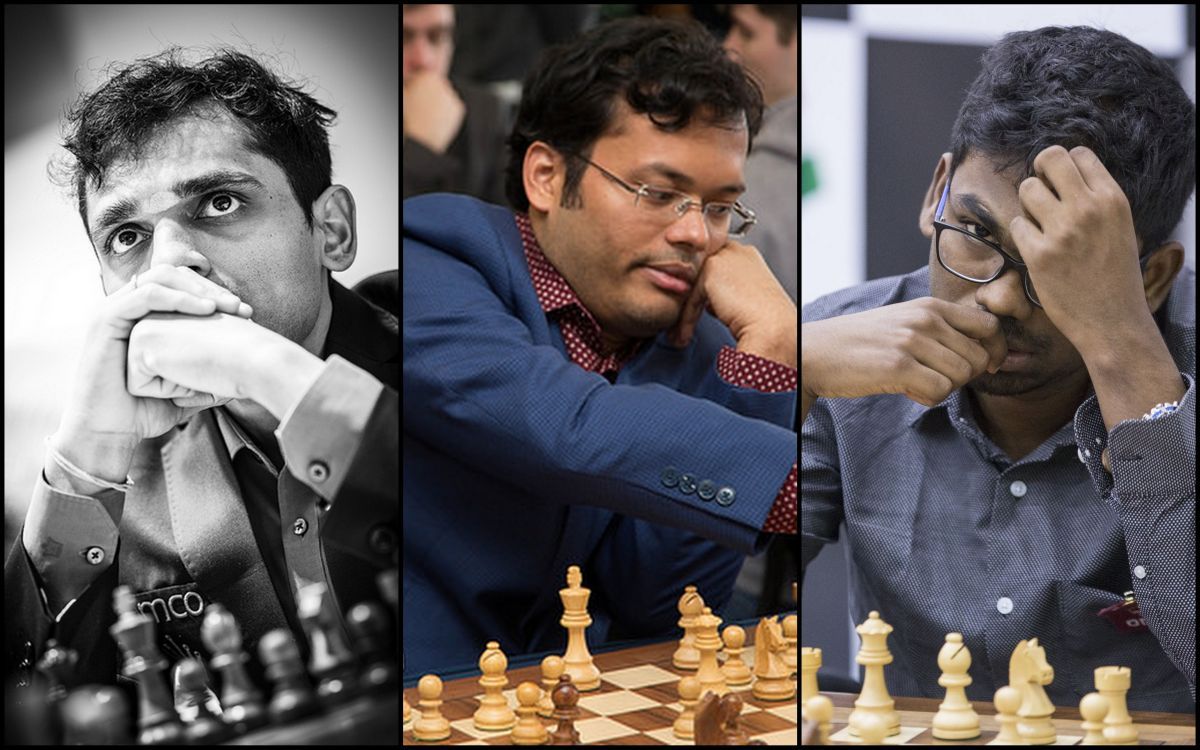 Three players fired for us in round six against Kazakhstan. Sasikiran scored a much needed win against Anuar Ismagembetov, Ganguly got the better of Murtas Kazhgalayev and Sethuraman was unforgiving against Denis Makhnev.

The best game of the round was surely Sethuraman's win against Makhnev:

In round seven we were up against Azerbaijan. Although the Azeri players haven't been performing up to the mark in this tournament, with Naiditsch, Guseinov, Safarli and Abasov, they have a strong team. Sethuraman on board four had some chances to get a good opening advantage, but he wasn't able to and the game ended in a draw. Sasikiran was pressing hard against Guseinov but even that game petered out into equality. Ganguly had no real chances against Safarli and the game was drawn. Adhiban on board one had a lost pawn endgame against Naiditsch. Yes, you read that right, a lost pawn endgame and Arkadij wasn't able to convert it into a full point. Let's see whether you can do better than Naiditsch?

Naiditsch vs Adhiban, round 7 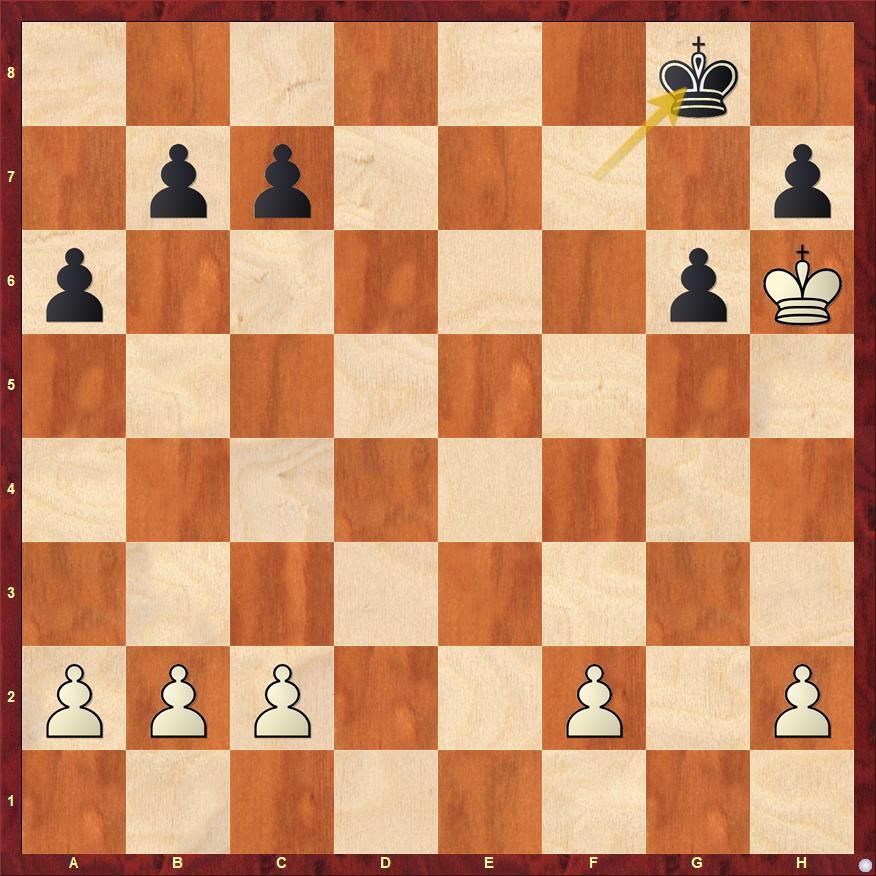 It's White to play here. What would you do?

Such pawn endgames are difficult to understand because you don't really know where you should be placing your pawns. But I think the first move that should come in the mind of a strong chess player is b4! The reason is that b4 clamps all three black pawns. a5 and c5 are ruled out and if Black plays b5 then in the resulting positions where White goes f4-f5 and exchanges the pawns and then gets Kg5-f5, the c5 and c6 squares have become soft. There are many variations, but all of them win after white goes for the move b4! But Naiditsch played c4? and Adhiban instantly pounced on the opportunity to gain more queenside space with ...a5! After that the game is drawn! That's how pawn endgames are. One slip and it's all over.

Daniel King's Powerplay 5 is where I learnt this concept of clamping opponent's pawns. Till date it is one of my favourite ChessBase DVDs. If you are looking to improve your pawn play then this one is for you! You can also read a review about it here.

A 2-2 draw against Azerbaijan might not be the result we were looking for, but after seeing Adhiban's game above, I think it's a result we will take any day!

In round eight against USA, we were once again in a similar situation where three boards yielded a score of 1.5-1.5 and it all boiled down to Adhiban's game. Sasikiran had lost to Samuel Sevian, while Ganguly had been able to beat Alexander Onischuk.

Adhiban was a piece down against Dariusz Sweircz and there seemed absolutely no way in which the Indian could save his position. But the beast survived! Here is the game, with some interesting analysis. 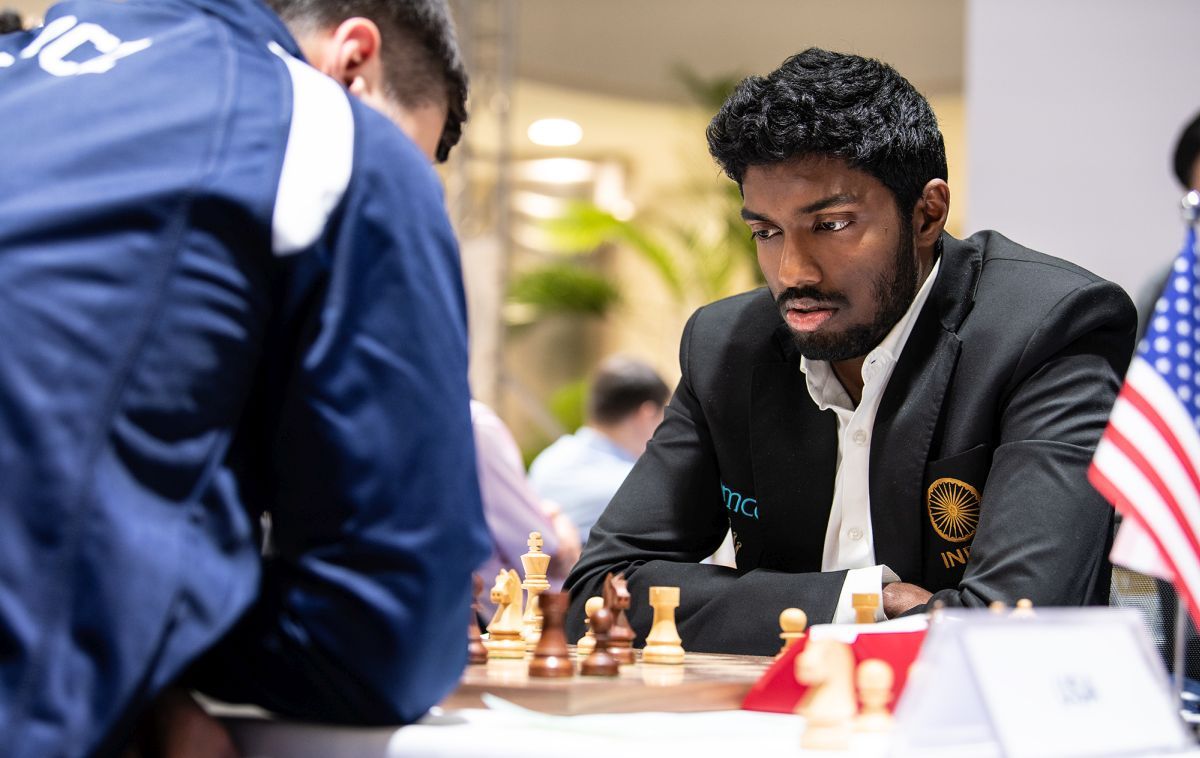 Genius, or lucky? I would prefer to go with the former! | Photo: David Llada
Niklesh Jain speaks about Adhiban's phenomenal defensive abilities on the ChessBase India Hindi YouTube Channel 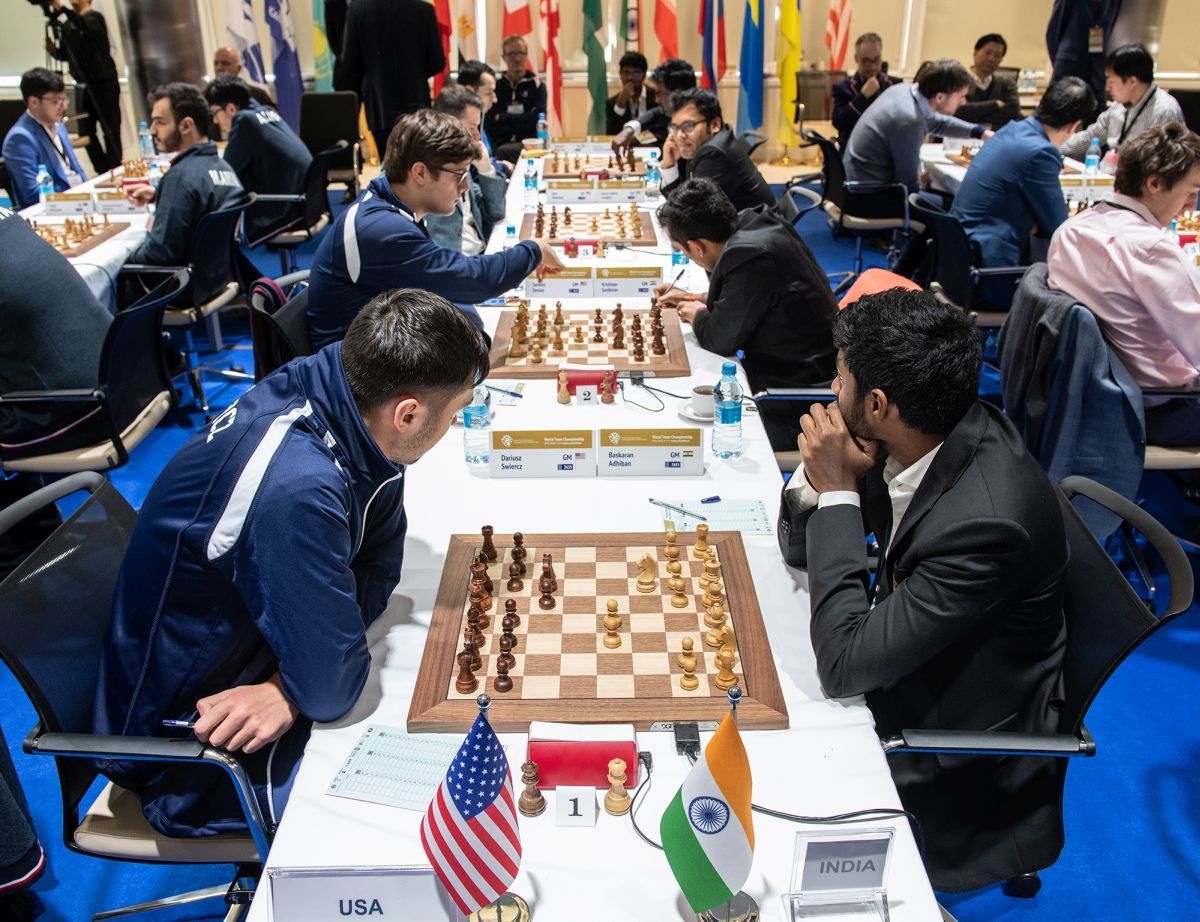 The final round pairing between India and Russia:

Karjakin is not in the best of forms and I would say Adhiban has excellent chances against him. Nepo against Ganguly will be exciting and so will be Grischuk vs Sethuraman. Will Aravindh maintain his cool against Andreikin? Sasikiran has been rested. It's going to be exciting and the live action begins at 11.30 a.m. IST.

The women's team has been unable to perform upto their mark. They have lost to the top three teams, China, Russia and Ukraine with a margin of 2.5-1.5. With 8/16, we do not have chances for a medal. China has confirmed their gold medal with a 100% score, Russia, Ukraine and Georgia will fight for the silver and bronze medals.