India's solid performance in first eight rounds was not good enough for a medal as the team slumped to a 2.5-1.5 loss to Russia, and were pushed to the fourth position. Russia took the gold medal, England surprised everyone with the silver and China had to settle for the bronze. Although India couldn't get a team medal, Adhiban and Ganguly both won individual golds on boards one and three respectively. Adhiban performed at an Elo of 2828, while Ganguly's rating performance was 2850! In the women's section China won the gold, silver went to Russia and Georgia took home the bronze. Indian women's team didn't have the best of events, finishing sixth. A detailed final report from Astana, Kazakhstan.

It was heartbreak for India on the last day of World Teams 2019. After playing some excellent chess throughout the event and remaining undefeated in every match, India faced its first defeat against Russia and that was enough to throw them out of the top three. This is how the standings looked prior to the final round:

India faced a stiff task as they had to draw or beat Russia in the final round to get a medal. England was up against Sweden and China took on Kazakhstan. It was safe to assume that both China and England would score wins against their respective opponents. Hence India had to at least draw the match for a bronze, and win it for the silver.

On top board Adhiban managed to hold Karjakin to a draw. Adhiban was slightly worse, but never really the advantage for his opponent get out of hand. Surya Ganguly had excellent chances to win his game against Ian Nepomniachtchi after the latter played quite poorly in the opening. Ganguly had an advantage throughout the game but couldn't convert it. 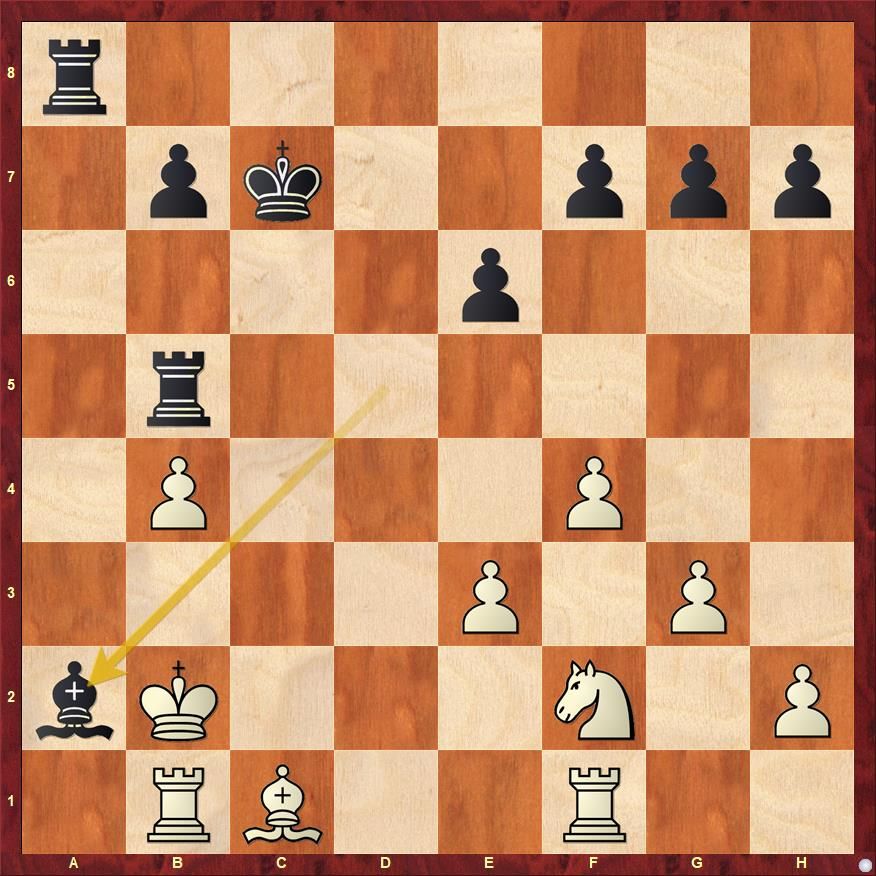 The fastest and the safest way for Ganguly to win was to play Bd2 here. Give up an exchange and then comfortably convert the rook versus two minor piece. Instead Surya played Ra1. Black was still worse, but he managed to create activity and somehow survived.

Aravindh drew on board four against Andreikin which was a good result for India. All eyes shifted towards the game of Grischuk versus Sethuraman, where the Indian GM made an error in the opening. 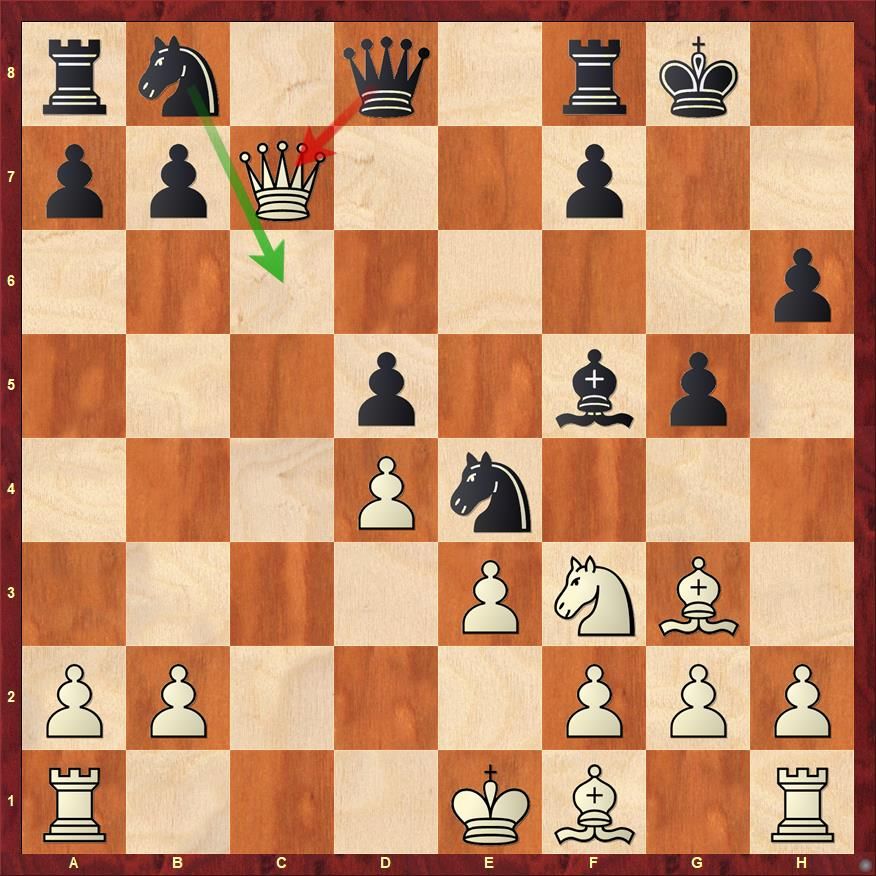 Sethuraman took the queen on c7 in this position. Instead of that ...Nc6 had been played by Aronian against Ding Liren and Black had secured an easy draw. It seems as if Sethu mixed up his preparation as after Qxc7, White got a clear edge.

Subsequently Sethuraman tried his best to hold on to a draw and he was quite successful in his defence getting an opposite coloured bishop + rook endgame. But the pressure was very high. A final mistake and Grischuk didn't leave his opportunity to score the win.

Although India fought valiantly in the match, we had to accept a 1.5-2.5 loss. On the other hand England and China both won their matches and claimed the silver and bronze medal respectively. 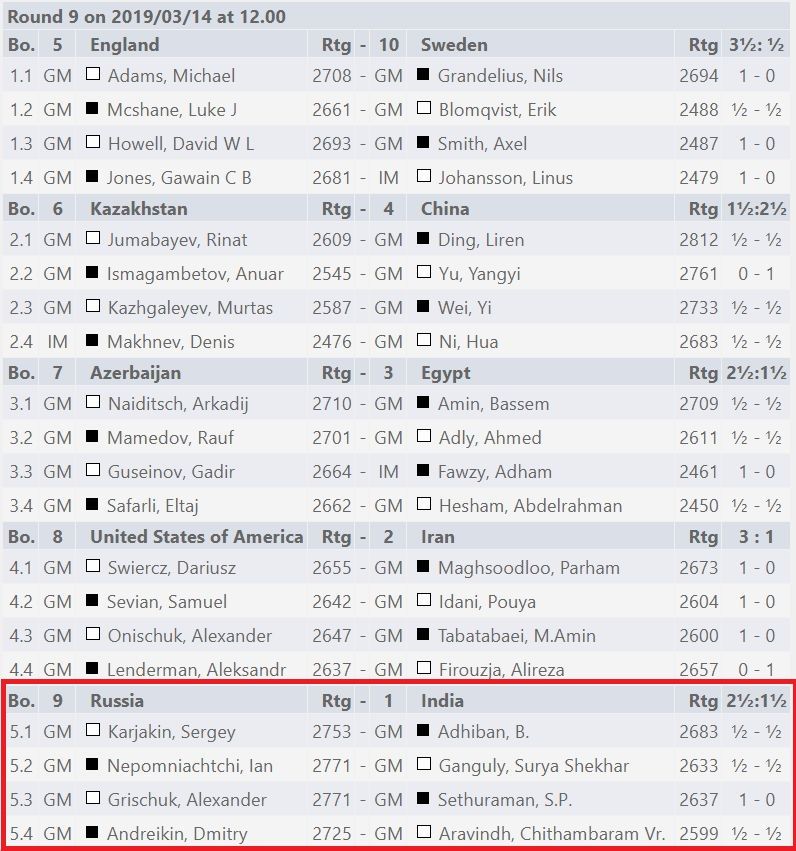 A 2.5-1.5 defeat for India, thumping win for England and a narrow victory for China pushed us back to the fourth spot

Russia dominated the event and rightfully claimed the gold. The English team surprised everyone with their tenacity and picked up the silver. China had a pretty bad event, but still managed to win a bronze!

Interview with the Russian team after their victory 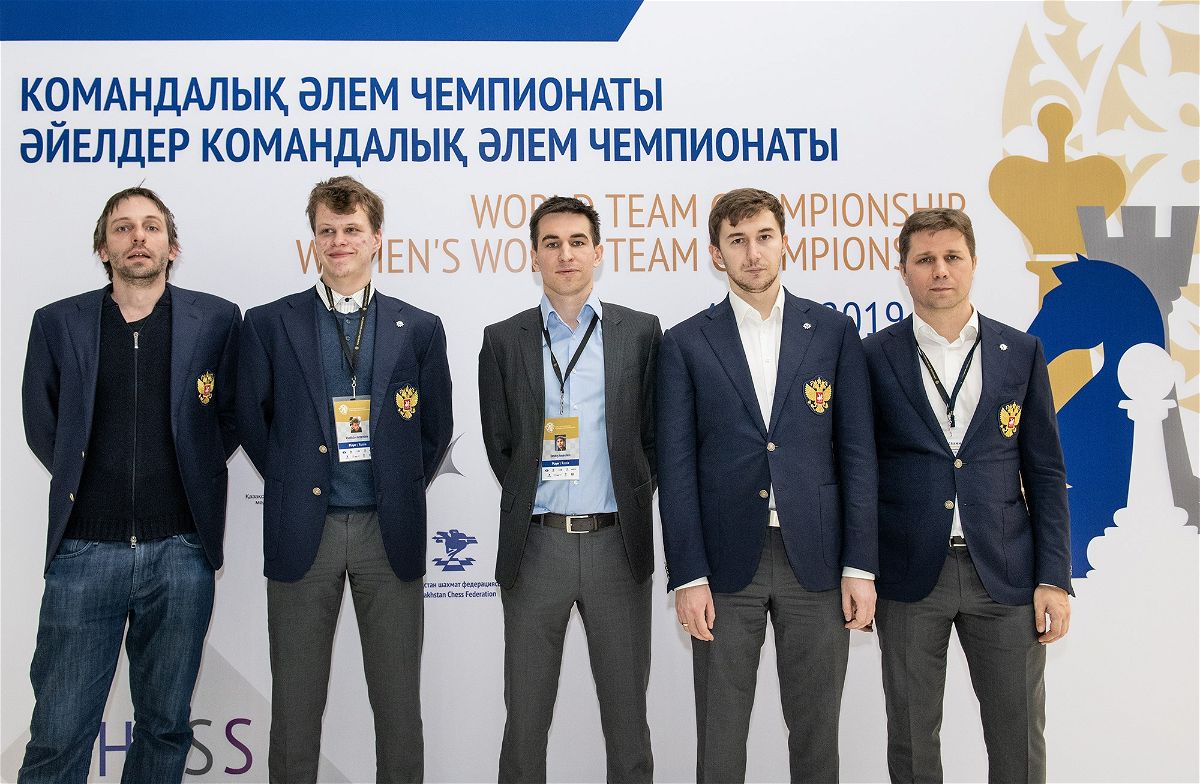 After 2013, this is the first time that Russia won the gold medal. Artemiev scored heavily with 6.5/8 | Photo: David Llada . 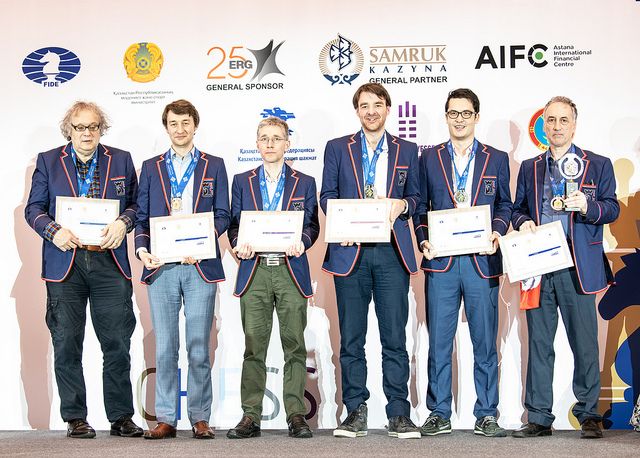 The English team played brilliantly and took home the silver. It was a great team effort. | Photo: David Llada 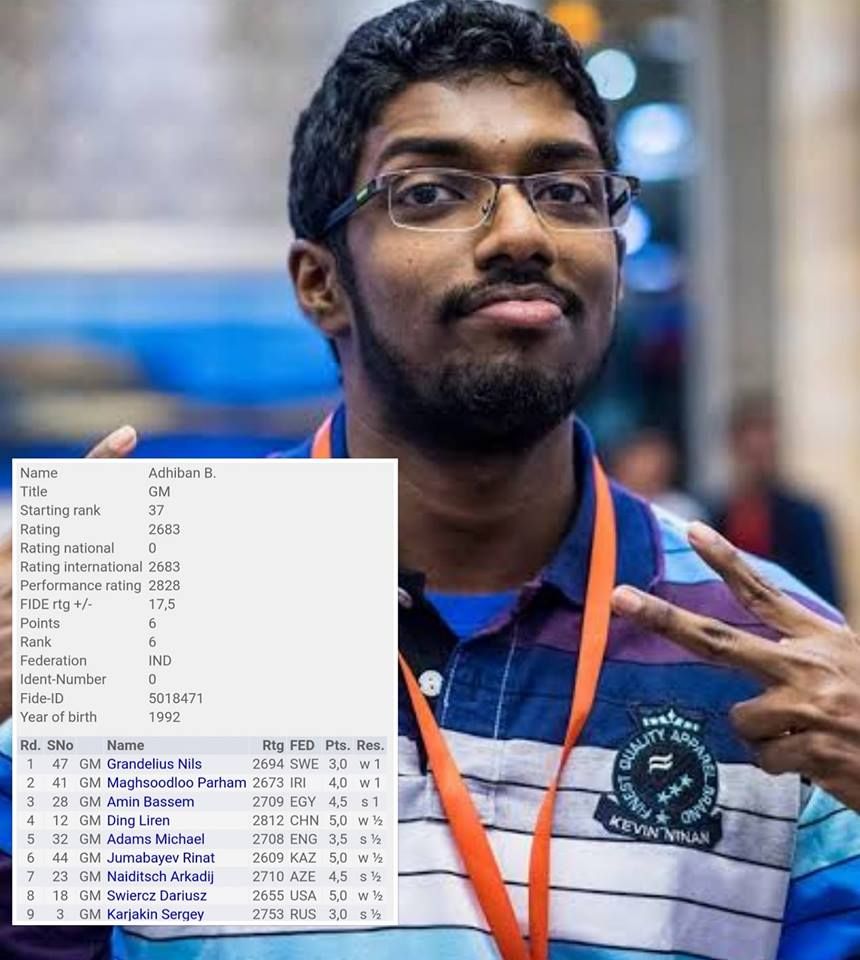 Although India didn't win a medal, Adhiban won the gold on board one with a 2828 rating performance! 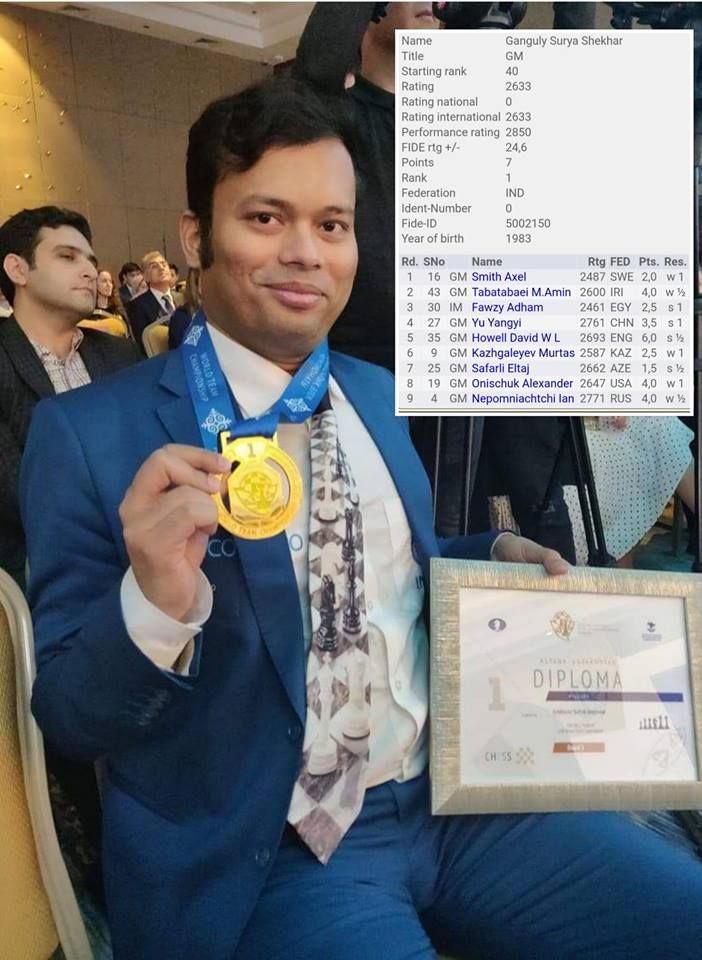 Ganguly won the gold on board three with a 2850 rating performance!

It was a tremendous performance by Adhiban Baskaran to win an individual gold on board one for team India. Adhiban faced the strongest players of each country on board one, scored 6.0/9, remained unbeated, performed at an Elo 2828 and gained 17.5 Elo points. He beat Grandelius, Maghsoodloo, Amin and drew against world class opponents like Ding Liren, Michael Adams and Sergey Karjakin. Adhiban also managed to cross the 2700 Elo mark after the 4th round of the event, becoming the 5th Indian ever to cross 2700 Elo in the history of the game. With this performance Adhiban proved that he is worthy of leading the Indian team on board one. Even though Anand, Harikrishna and Vidit were absent Adhiban did not let the top board results suffer.

Ganguly won against strong players like Yu Yangyi and Alexander Onischuk and held his own against David Howell, Eltaj Safarli and Ian Nepomniachtchi. Ganguly's live rating is now 2657. His highest Elo has been 2672 in the past. Judging by his performance here we can be sure that Ganguly would soon surpass the 2700 Elo barrier. Even though India didn't win a medal, Ganguly and Adhiban's performance made it an event to remember for Indian fans.

Overall performance of the men's team 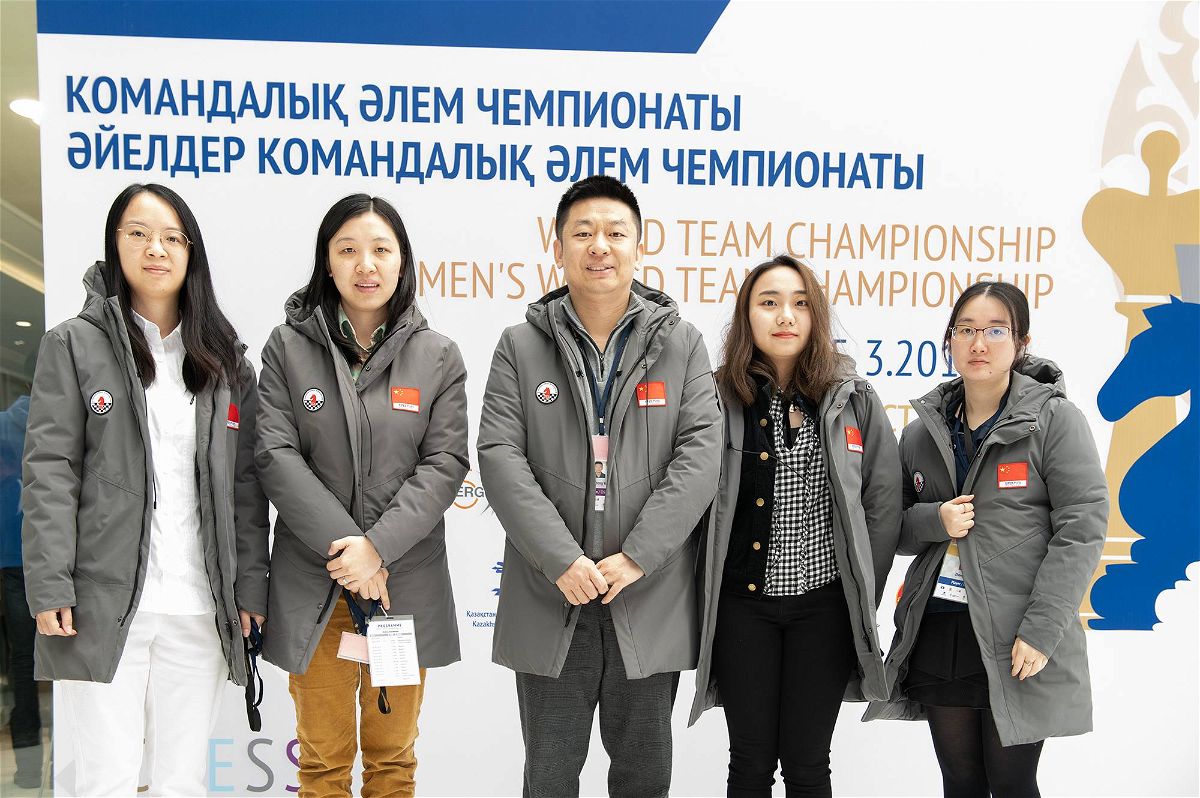 The winners in the women's section - China with a perfect score of 18.0/18 | Photo: David Llada

Ranking crosstable for women after 9 rounds

Team India couldn't play up to their potential in the women's section and had to settle for the sixth spot.

Bhakti Kulkarni played the best with 6.0/9 and gaining 28 Elo points. Tania played only two games because of health issues. 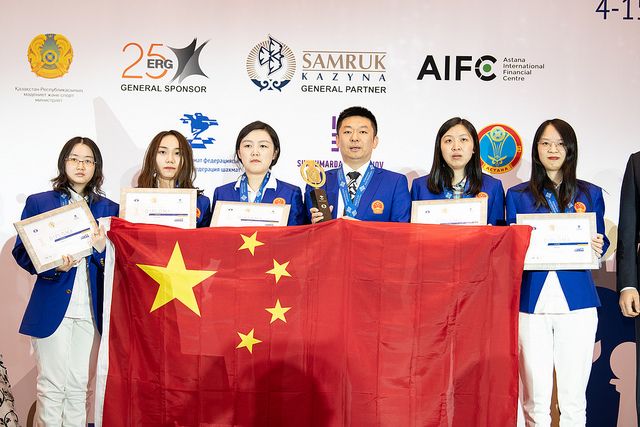 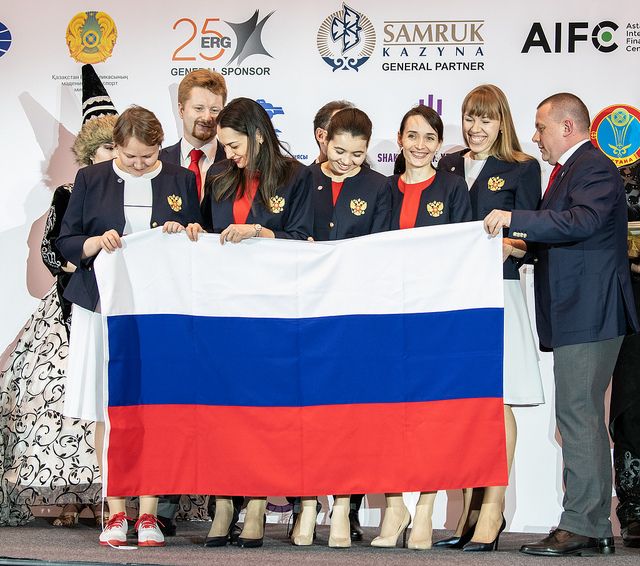 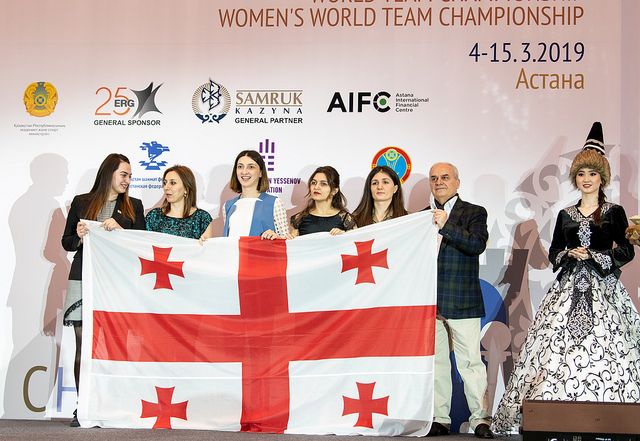 The Georgian women's team had to settle for bronze | Photo: David Llada

It was great to see that team India was sponsored for the first time in the history of World Team Championships. A big thanks to Ramco for coming forward and supporting the players.

Check out the individual board prizes for the open section

Check out the individual board prizes for the women's section