Simple Chess in a profound way

Altibox Norway Chess was the last major over-the-board chess event to conclude this month. At this point, it is highly unlikely for us to witness another otb super tournament before the year ends because the second wave of Covid-19 is hitting and many countries have already gone into lockdown. Anyway, Chennai resident Srikanth Govindaseshan explains a simple game of chess between two Norwegians, the world champion Carlsen and Norway no.2 Aryan Tari. He also draws simile from various poems and elaborates on the art form of chess. Photo: Lennart Ootes / Altibox Norway Chess

The great Tamil poet Bharathiyar says, "learn and understand with great clarity; then convey what you understood in clear manner; only to those who think deeply and uniquely would realise great dreams"!

An artist, whomsoever he or she may be, needs the above... whatever be the field of art. One has to understand the art deeply in their own unique way and only then they would be able to let their unique art manifest through their action.

Chess is an art

...and the art is to express yourself in the most simple manner!

And sadly even Theology;

Now here I am, a fool for sure!

No wiser than I was before..."

Faust is an expression of Goethe's impression about humanity, its grandeur and foibles, hopes, despairs, illusions, nobility, crime... and above all, acceptance of 'Human limitations'!

We may work hard on many things, yet, one cannot be assured of anything and even if someone "achieves" something, the satisfaction would elude them still!

One will remain no wiser than before... after all!

What relevance does this have to the game that follows?

Let us go to the game straight and then return back to the question in the end! 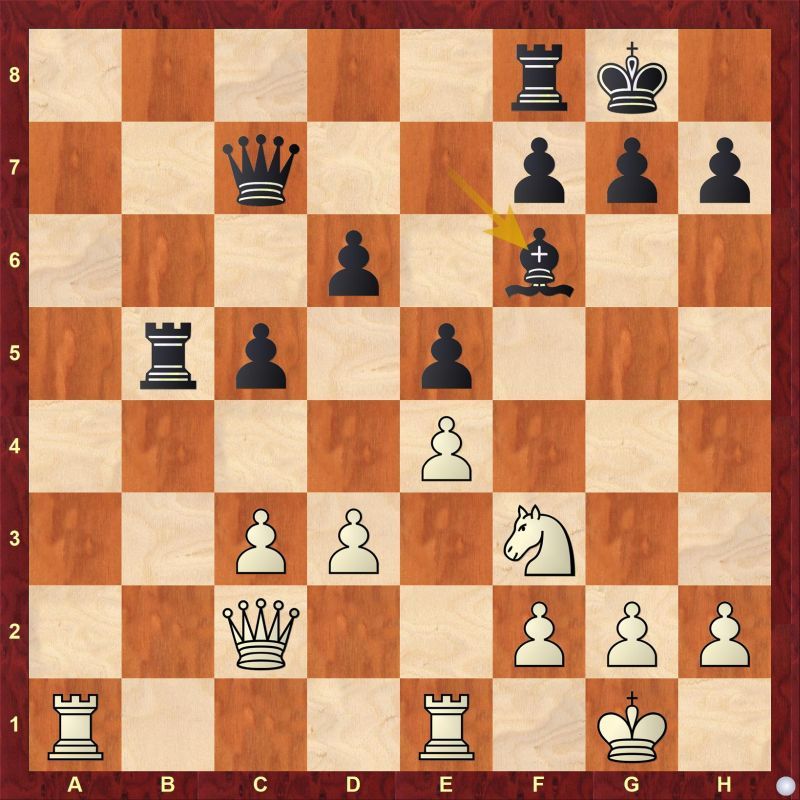 Oh! Why did I rush so fast to this position!? 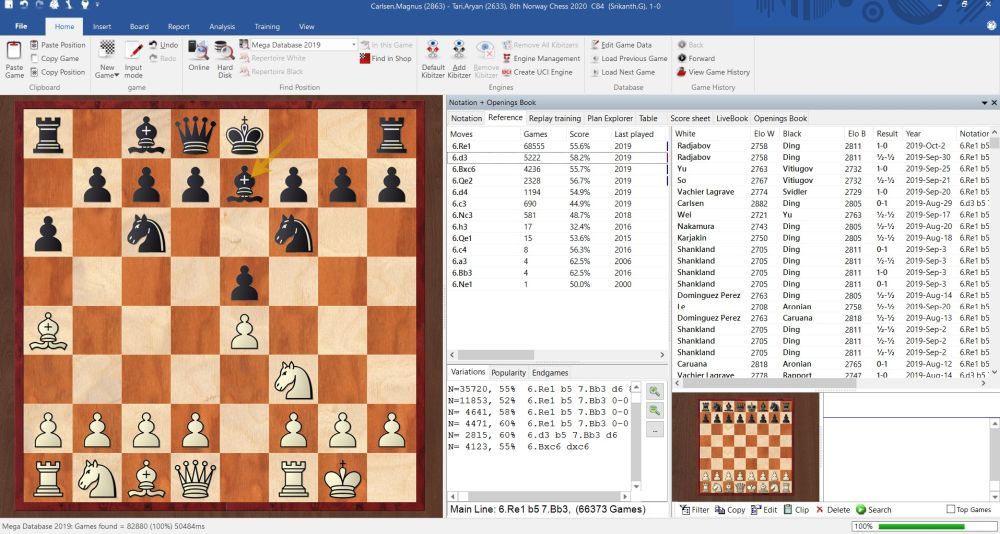 Well, both 6.Re1 and 6.d3 does strengthen the center. 6.Re1 brings a piece into the center and has an indirect eye on the "e5" pawn and exert pressure on the e-file; whilst 6.d3 simply reinforces the e4 point and paves way for the Bishop on c1 to move - though there are occasions where this Bishop may appear to be developed on c1 square itself not interfering with the activity of his other pieces.

Suffice to say, it wasn't popular since 1861 up to 2011 or so. And since 2011, players started looking for some area which is not yet over analysed especially with engines and therefore started playing this line more often, which slows down the game considerably as White is not intending to enter into an immediate combat in the center with d4 in the near future, or may totally avoid it. But one should have loads of patience to play the resultant middlegame and more often than not, it will drift into some ending where again one's prowess in that phase of the game - the most important one - which will prove to be a significant factor.

More or less by 12th move, we would have left all books (I don't consider databases as they would have anything that resembles a "chess-move") and entered into Magnus Carlsen's domain - Simple Chess!

Coming back to the position after Black's 20th move

Carlsen is good at maintaining options and is always prepared to wait for a considerable time before determining a position and probably considers various options for his pieces and how to wait for his opponent to certain things which would help him in deciding a particular path. Most importantly, he is happy with little things that happen in a position and does not rush.

This involvement of opponent - as a cocreator - is probably a tacit act and is not even as pronounced as reading your partner's hand in a game of Bridge.

With the Black Rook pinned with the Queen on c6, White calmly clears his back-rank threats.

Black also clears his back-rank. 25...Qh3 26.Ra7 followed by 27.Qa4 would increase pressure. In any case the Rook on e1 takes care of any back-rank threats and the Queen on h3 would be doing nothing.

It is better to avoid some spate checks in future also, as you would observe subsequently, this simple move comes in handy when White needed to breakthrough on the Kingside light squares, of course after Black obliged him by weakening it!

Played in the style of Morphy or Capablanca! It is not about occupying the 7th rank, which is not permanent and effective as long as Black has double Rooks on the b-file. But, this move eliminates one of the active Black Rooks and thereby allowing the remaining White Rook to assume a dominant file. 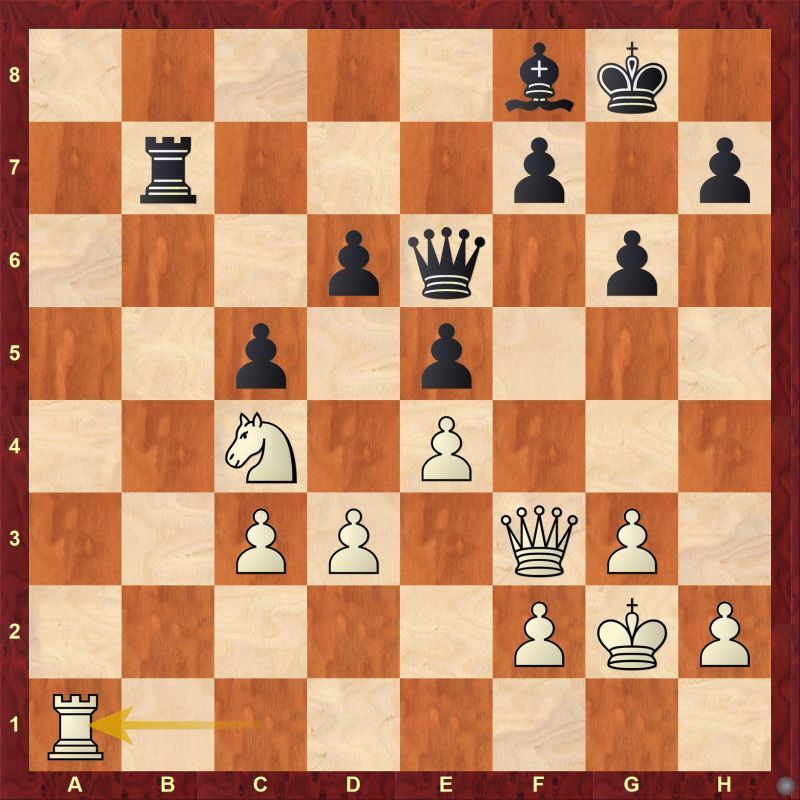 The first mistake proves to be fatal! This move weakens the light squares on the Kingside thereby giving him a target to attack.

When in doubt, or when you don't know what to move or if one does not have an easy move to make, then any pawn moves would potentially worsen the position. It is better to make some piece maneuver. 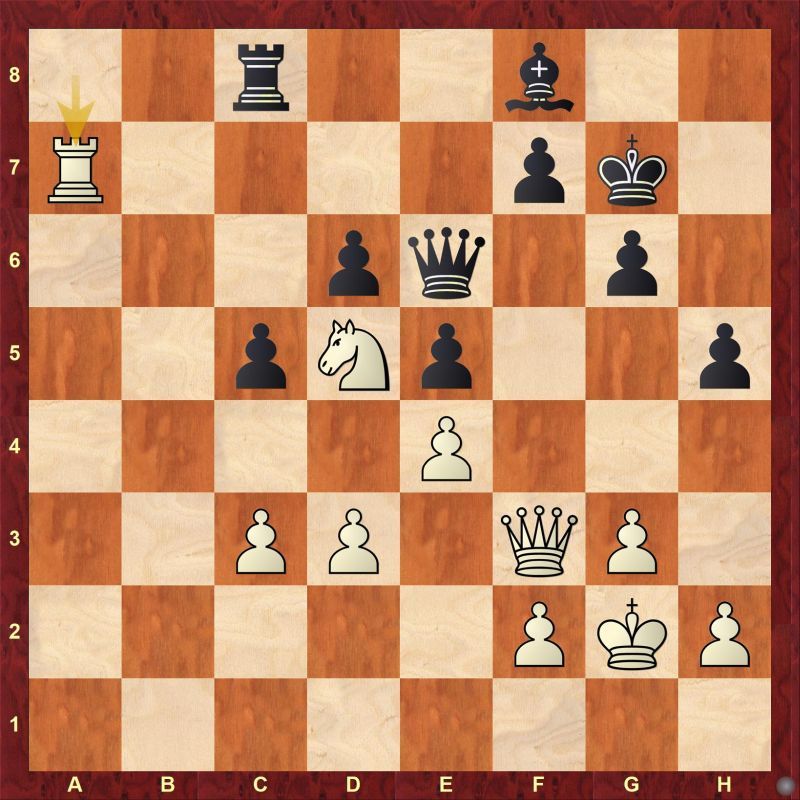 Now the White Rook is anchored on the 7th rank. From now on, the Python quickly coils around his prey and crushes.

Black pieces cannot do anything rather than being a spectator and watching the grave being prepared for the King.

If Black keeps saying pass, as in the bidding process in a game of Bridge, White will play g5; Qg3-h4; and Nf6

All the Rook moves are aesthetic and keep gaining in force - very reminiscent of Karpov!

White was threatening 40.g5! followed by shifting the Queen to h-file

When one keeps playing simple moves, at some point they start becoming simply profound! It is like great film directors utilising the natural light and props instead of artificially lighting the scene of action and trying to build artificial structures etc.

But it is very difficult to play simple moves in Chess! The mind will always try to think like Christopher Nolan and seldom like Akira Kurosawa or Satyajit Ray! 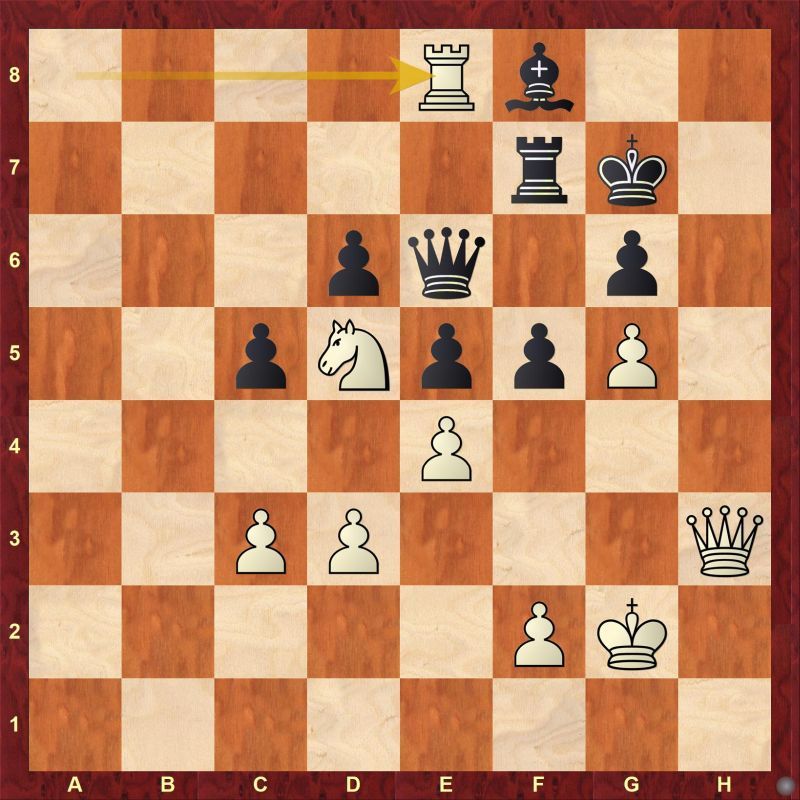 Coming to Goethe's Faust and Bharathiyar's poem and its relevance!

Whether it is Life, Science, Art, or any field, one has to remain simple in their approach! The nature expects us to respond in a simple uncomplicated way and does not need our "intelligence". One may study many things, be proficient in complex aspects of a subject, but it amounts to nothing if one does not act in the most simple way in the present moment! Theories and thesis will only lead one to the delusion that something will happen in the future and hence one has to do some complex things now.

Arthur Koestler said, in his great book "The Act of Creation" - "The act of discovery has a disruptive and a constructive aspect. It must disrupt rigid patterns of mental organisation to achieve the new synthesis. Discovery often means simply the uncovering of something which has always been there but was hidden from the eye by the blinkers of habit."

There is a truth about the modern medicine and medical practice which is conveyed through a jovial story!

If one gets ill, they should go to a doctor. The doctor will observe, diagnose and write a prescription of medicine.

He will then give you a bill for his fees and you need to pay him, as he has to survive through that earning. You should produce the prescription to a pharmacist and he will give you the medicine and a bill and you need to pay him as his life is dependent on that profit. You should come home and throw the medicine that you bought into the dustbin, only then you will survive!

Likewise, any knowledge that is acquired from outside, through a teacher or trainer or books..... should be dropped at somepoint, and start self-enquiry - put all principles and practices to acid test - else one would remain a poor imitator of what already exists and being repeated by millions. They will not become a true creator - a true artist!