The second game of the FIDE World Championship Dubai 2021 was an incredibly exciting encounter. Everyone was on the edge of their seat and kept wondering whether we will see a decisive result in a Classical game at a World Championship for the first time since 2016. Well, the answer is clear now, we have to wait a bit longer. If yesterday was a sign of things to come then rest assured, the wait will not be a longer one. While both players have shown incredible preparation in the first two games, we also got to witness the humane side of them. Even the toughest gladiators fall on an unfortunate day, that day was not yesterday. Photo: Amruta Mokal

Whose woods these are I think I know.

His house is in the village though;

He will not see me stopping here

To watch his woods fill up with snow.

My little horse must think it queer

To stop without a farmhouse near

Between the woods and frozen lake

The darkest evening of the year.

He gives his harness bells a shake

To ask if there is some mistake.

The only other sound's the sweep

Of easy wind and downy flake.

The woods are lovely, dark and deep,

But I have promises to keep,

And miles to go before I sleep,

And miles to go before I sleep.

Carlsen was in a bit of a pickle | Photo: Amruta Mokal

All these attempts at watching the game live, analysing the game subsequently and writing articles, doing podcasts are nothing but "giving the bells a shake and ask if there is some mistake" for, as Savielly Tartakover said, "Chess owes its existence to mistakes! " What is the move? We think we know, amidst the woods and frozen lake, but moves keep escaping the attention, positions keep looking bizarre, crazy and the players swim through current and muddy waters most of the time! 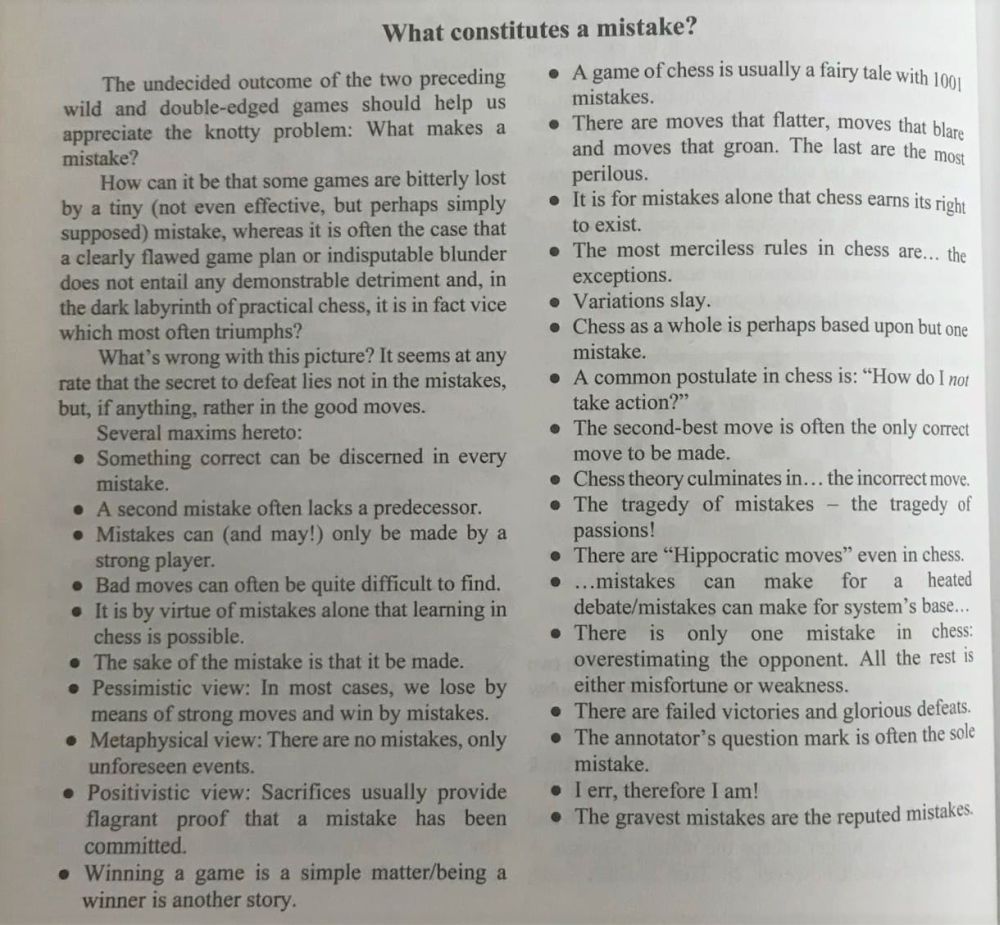 Tartakover on Chess and the art of mistakes

This is the pure art of Chess, my friend! Like in life, we never know where we are going, what we are doing, except for that inkling which is mere delusion! Acceptance is the key, be it chess or life and that doesn't preclude our trying, 'effort' (if you may wish to use this term!) over the board! 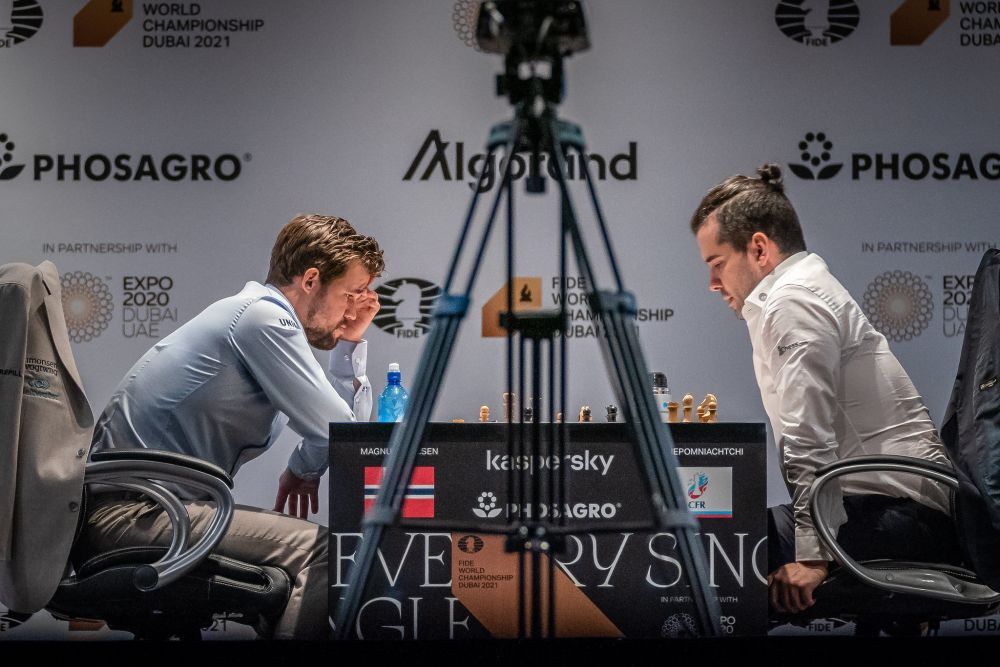 It was an intensely fought game. The above was a rare occasion where both players stayed on the board with deep focus! At times, the clock was running, and the playing arena looked... empty. 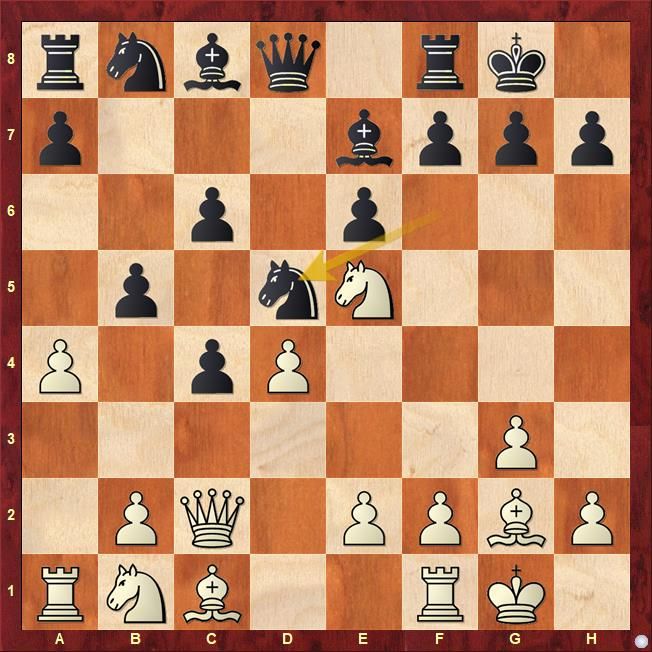 Lot has been spoken about Catalan and the order of moves that happened in this game. You may watch the video of commentary on youtube. Vishy was phenomenal as usual with his positional insights, witty remarks and anecdotes! Though, to a quirky question by a twitter user - on whose commentary would Carlsen and Nepo prefer to listen if they are not the playing the World Championship Match (...huh!?), Carlsen's reply was point-blank "I am really sorry.... I don't even remotely care" 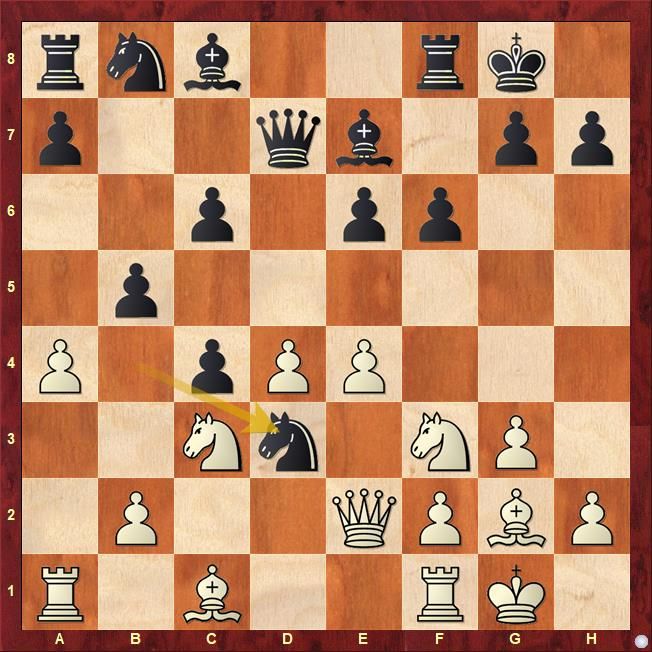 Appears as if something serious happened so early, as we don't get to see opponent knight perched so deep into our territory every other day! Let me put it this way, this knight on d3 is a thorn in white's flesh taking away some important squares from white's rooks, and we actually don't know where to develop that bishop on c1 (the proverbial saying that the queen's bishop is already well-developed on c1 itself in many lines, does not hold good here as it really hinders coordination amongst the rooks to say the least.)

At best we can say, Black is very comfortable. 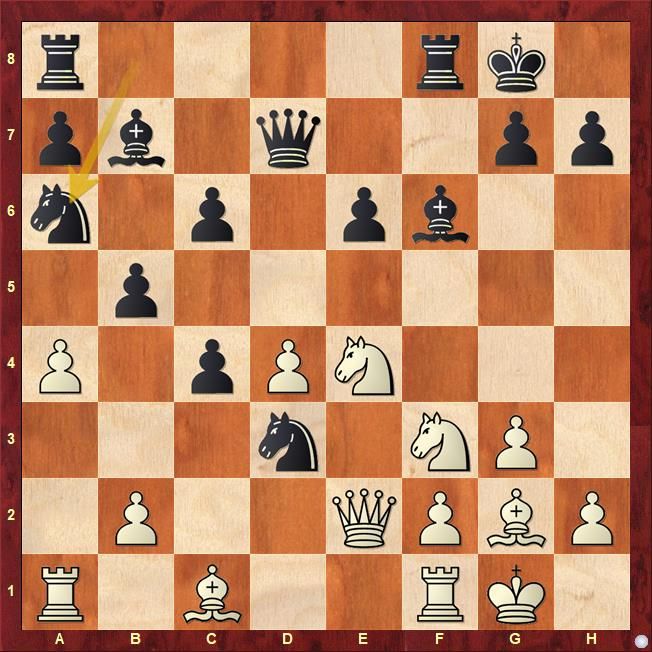 The critical moment from White's angle.

Carlsen did mention in the post game conference that, the move 18...Nac5! escaped his attention, and it was an unpleasant surprise to see that knight there!

Perhaps, this was the moment for the Bishop to develop to e3 or even 17.Nxf6 comes to consideration. But the position is very comples and when a player of the calibre of Carlsen can feel confused, then... 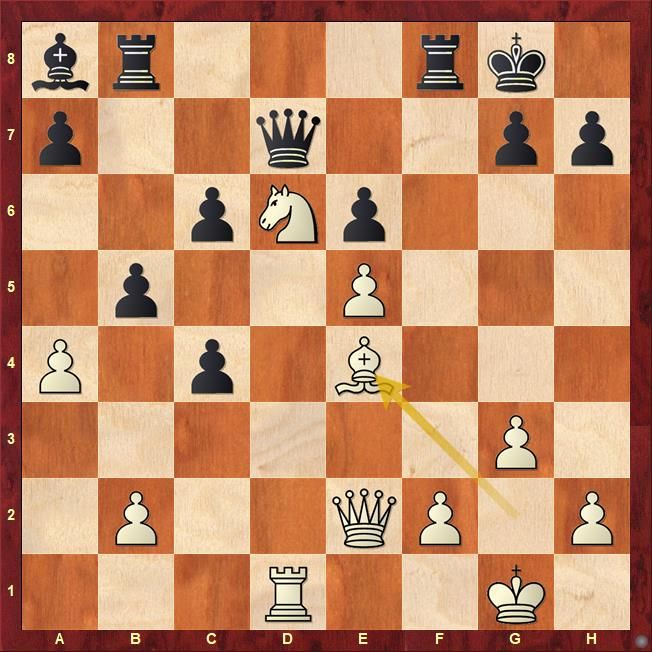 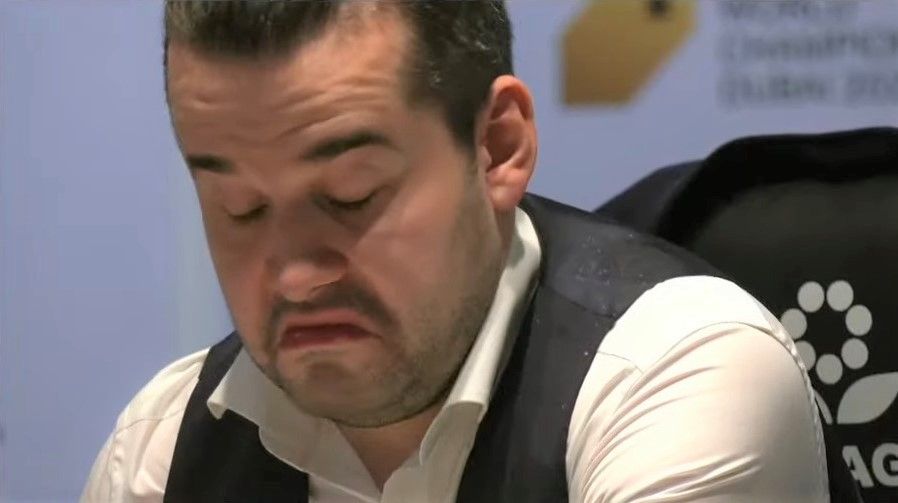 That expression says it all! | Photo: FIDE live stream

The move perhaps eluded Nepo when he chose to play 23...Ba8 and hence in a state of confusion, he pushed his pawn to 24...c3. Vishy in the commentary box was favouring the move 24...bxa4! when Black appears to be pressing hard for a big advantage.

Carlsen felt that his Bishop on e4 with the great knight on d6 and the prospects on the light squares around the king are sufficient to keep Black busy and not think about his material plus on the other side of the chessboard!

Let me digress a bit here

The meaning of moves, ideas on the chessboard is no different from the above! Muddling through is the way in chess too! We grope through darkness for the most part, allowing channels to open for both the players. To decide on a particular move is not the path - thought that is what we seemingly do. But in effect it is the pieces that move around, and we only provide open channels for their maneuvers!

Give a damn to the engine suggestions here on what could Black have played instead of 24...c3

I am certainly not going to give alternatives or variations here, both are futile! 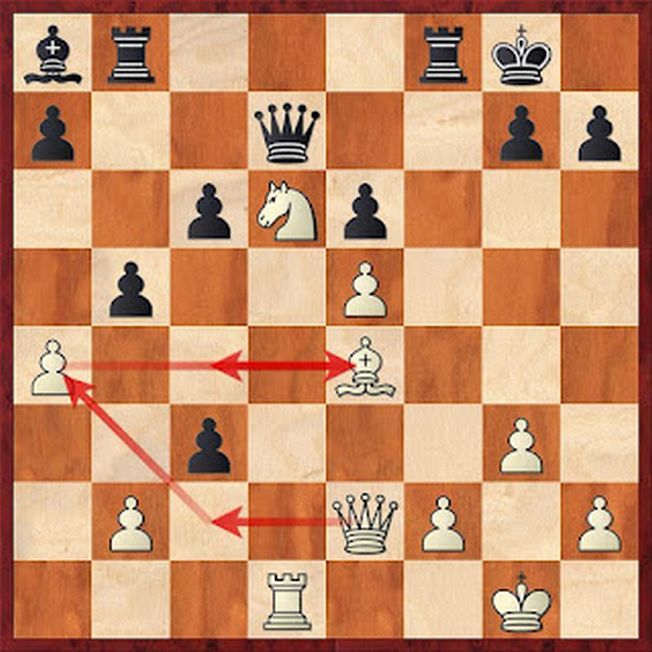 This Queen maneuver is exquisite! What Carlsen said about this and his subsequent moves is also equally beautiful - the mind of the master: "I didn't feel I had great chances per se... but did feel that my position was improving a bit and when I went for this 37.Qg4, my time was ticking a bit as I couldn't see a way to comfortably improve my position and that's why I decided to basically force a draw there. If it had been a must win game, I would have treated it differently!"

That is the essence of chess and chess mastery. The choices of moves have a bearing on the situation in a match or tournament and there is no objectively best move in any position other than the concrete one's like combination and endgames where there is a finish.

Rest of the game, I give without any comment. 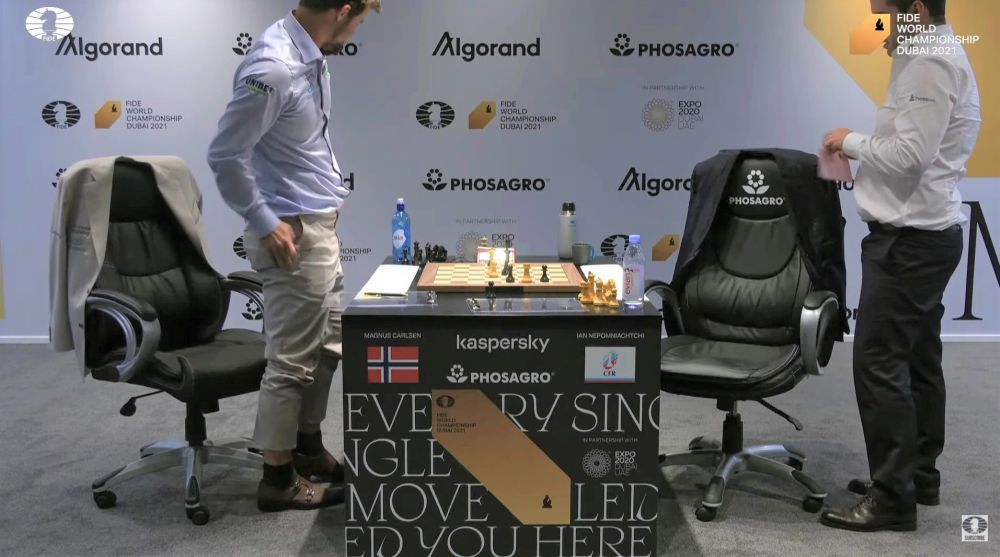 Players getting up to leave for the press conference after a tense game! | Photo: FIDE live stream

And one of the questions that came their way, about the time the players spend time on the board after the game, discussing the moves.

Carlsen replied: "Well, it is interesting to talk to someone who understands chess very well and unwinding"

Nepo's reply aptly summed up the game and the question: "Well, I am actually puzzled with the game today and now even more puzzled with your question....to be honest"