Bhakti Kulkarni continues to steal the show at the 46th National Women's Championship 2019. In round 8, victory came once again, this time against Nandhidhaa P V and that too playing the black side of the super weird Scandinavian opening. With the current state of things one might as well say that the Bhakti effect is taking over the tournament. However, possibilities still abound as just half a point behind breathing down Bhakti's neck is Vantika Agrawal. Meenakshi Subbaraman too has climbed up the leaderboard with formidable performances in the last two rounds and has every chance at putting a stop to Bhakti's dream run. With only three rounds remaining, the contest is still excitingly open to many! 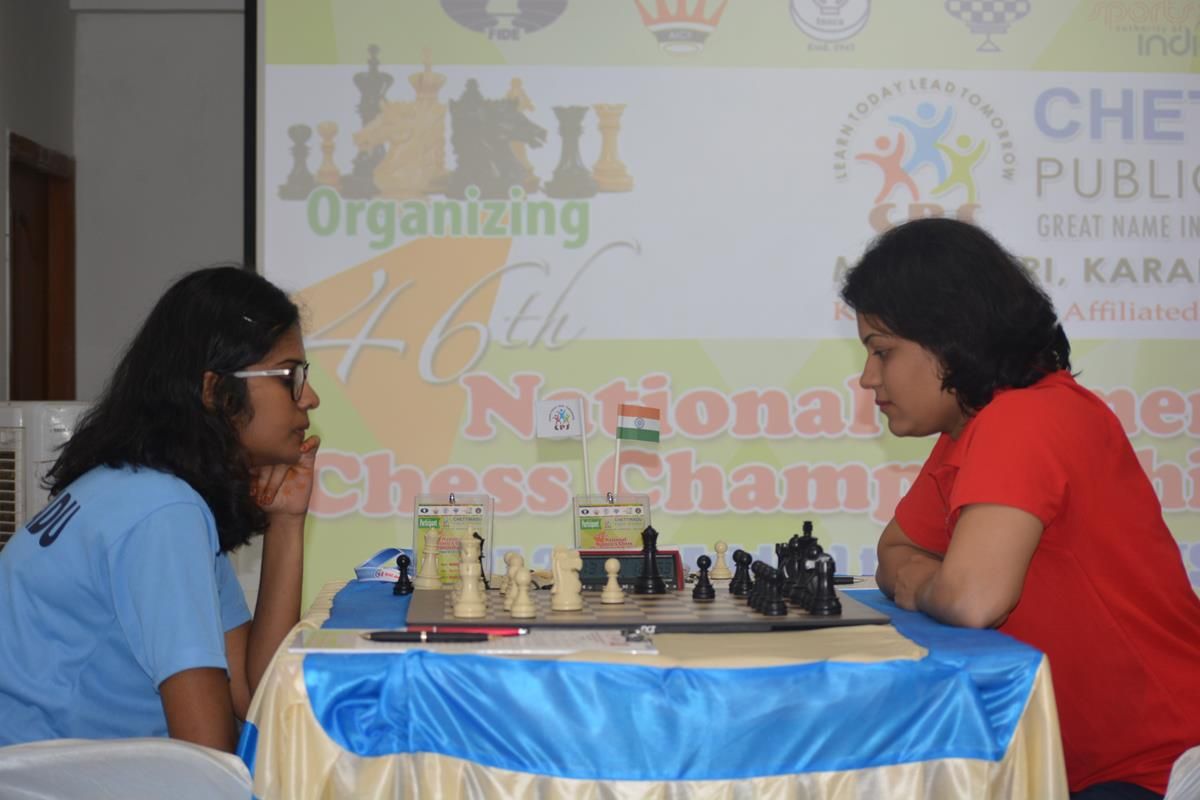 Bhakti Kulkarni surprised her opponent Nandhidhaa P V with 1.e4 d5 to register yet another victory on the eighth round of the event | Photo: IA Gopakumar Sudhakaran

In round 8 of the 46th National Women's Championship 2019 Bhakti Kulkarni was up against Nandhidhaa P V on the top board. The latter had the White pieces and started off with 1.e4 to which Bhakti replied by pushing her queen's pawn two squares! In today's age of engine based opening preparation, the Scandinavian defense has been conclusively declared as unsound for first class tournament play. Yet this obscure line keeps making fashionable comebacks even in the most elite circles. Only earlier this month it made a notable appearance in the second leg of 2019 Grand Chess Tour in Zagreb, Croatia when Shakhriyar Mamedyarov played it against Fabiano Caruana in their tenth round encounter of the event. While certainly not the best weapon for regular use, its surprise element does make it one of the ideal choices for occasional ventures. 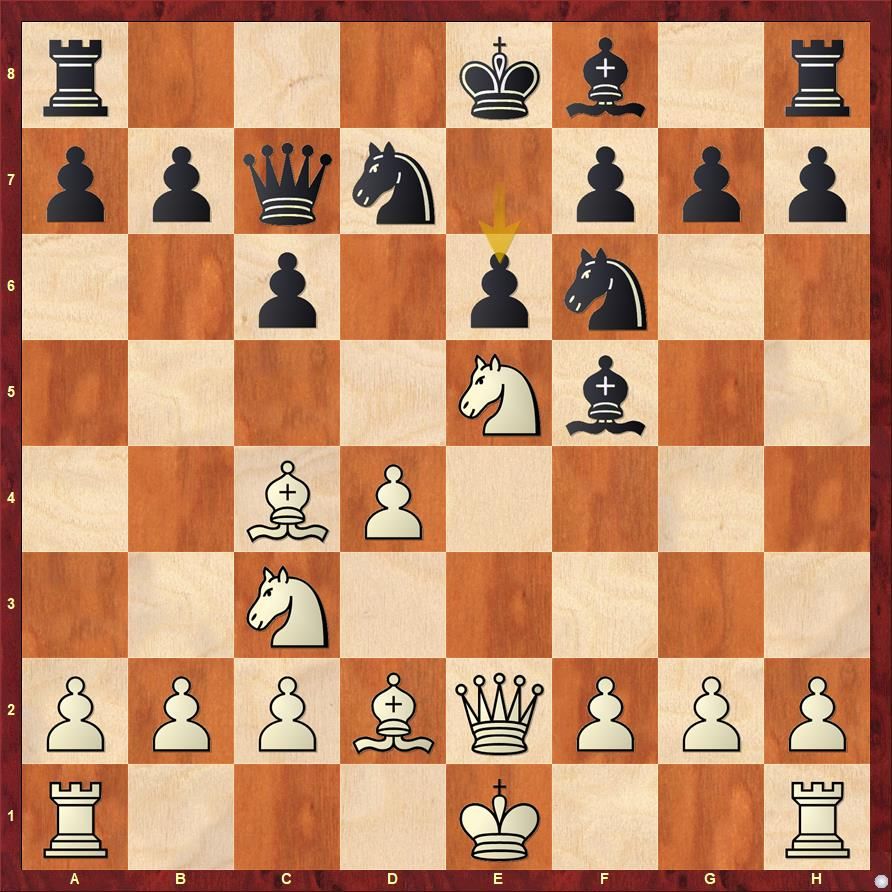 Position after 9...e6: Black has already spent a couple of tempi with the queen and it is in this position that things turn interesting.

10.Nxd7 was played here, now how do you recapture the knight on d7? 10...Qxd7 is certainly the first thing you would think of but this wastes another tempo with the queen and allows White to play an early 11.d5. Note, exd5 isn't possible because of the pin along e-file and 11...cxd5 too is out of question because then White has the nasty 12.Bb5! Thus, in this case, Black has to yield to an early liquidation in the center with something like 11...0-0-0 12.dxe6 Bxe6 etc. Bhakti surely didn't want this. After all, a surprise in the opening becomes meaningless if you simplify things that quickly. 10...Nxd7 also runs into similar problem with d5. Therefore, the move she played was 10...Kxd7!? adding to the surprise! 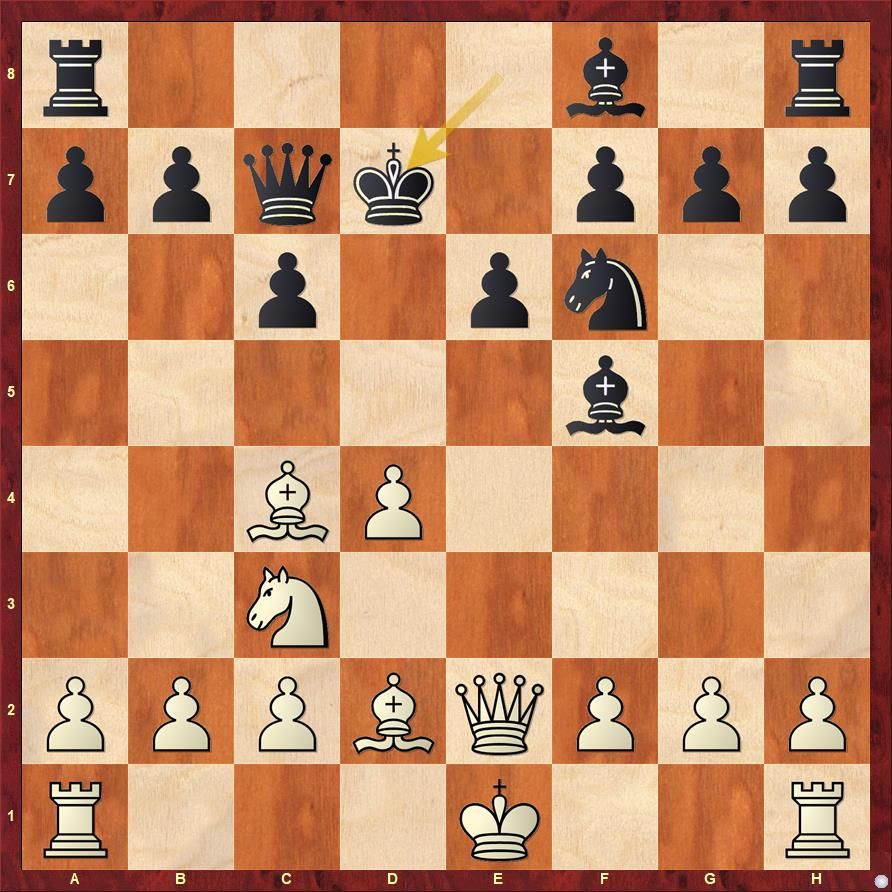 10...Kxd7, wow! What sort of a move is that?! Looks completely original, but this move has been already played in 19 games before. It prepares to castle artificially with Rd8 followed by Kc8 and also puts the king out of the e-file so that now 11.d5 isn't possible anymore.

The game followed 11.0-0-0 Rd8 12.Bg5 Kc8 and Black was able to keep the tension in the position. Next step was to develop the f8 bishop and double up the rooks on the d-file. 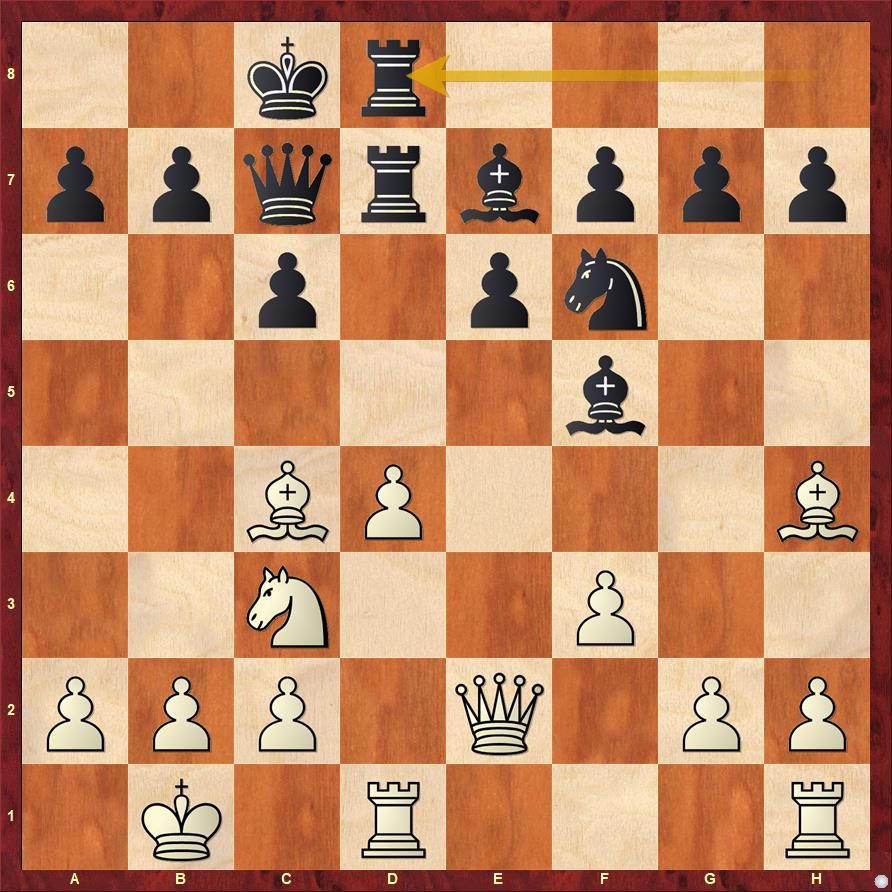 Position after 15...Rhd8: Now it is Black who has all the say in the center. 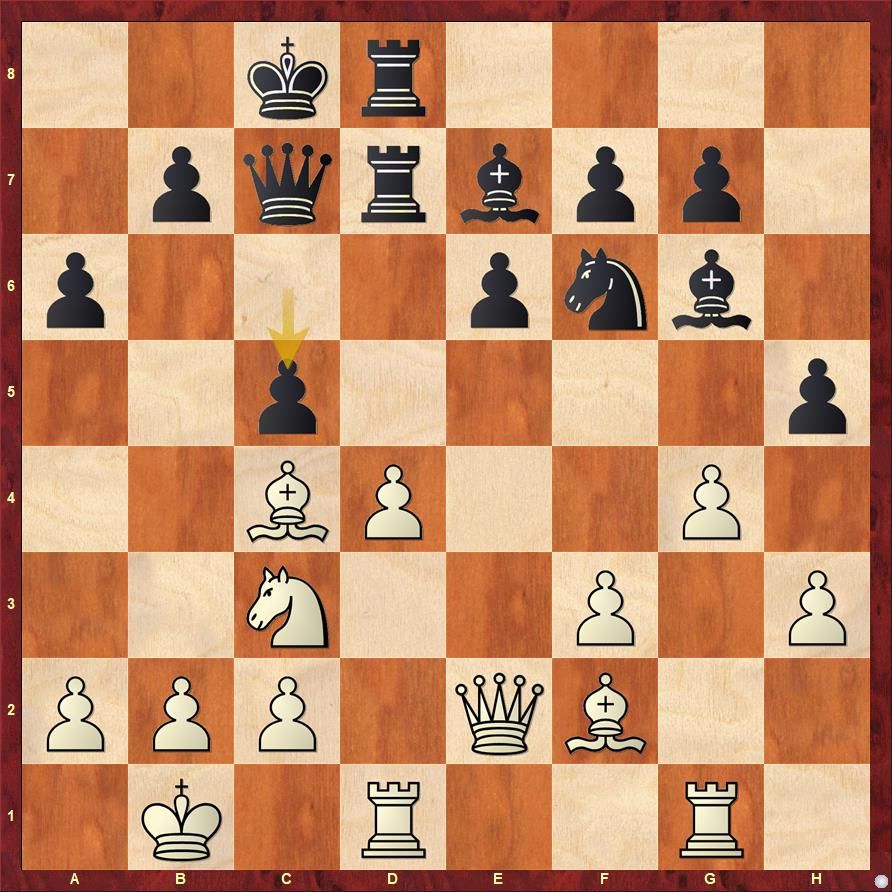 Position after 19...c5: Time to make a breakthrough! 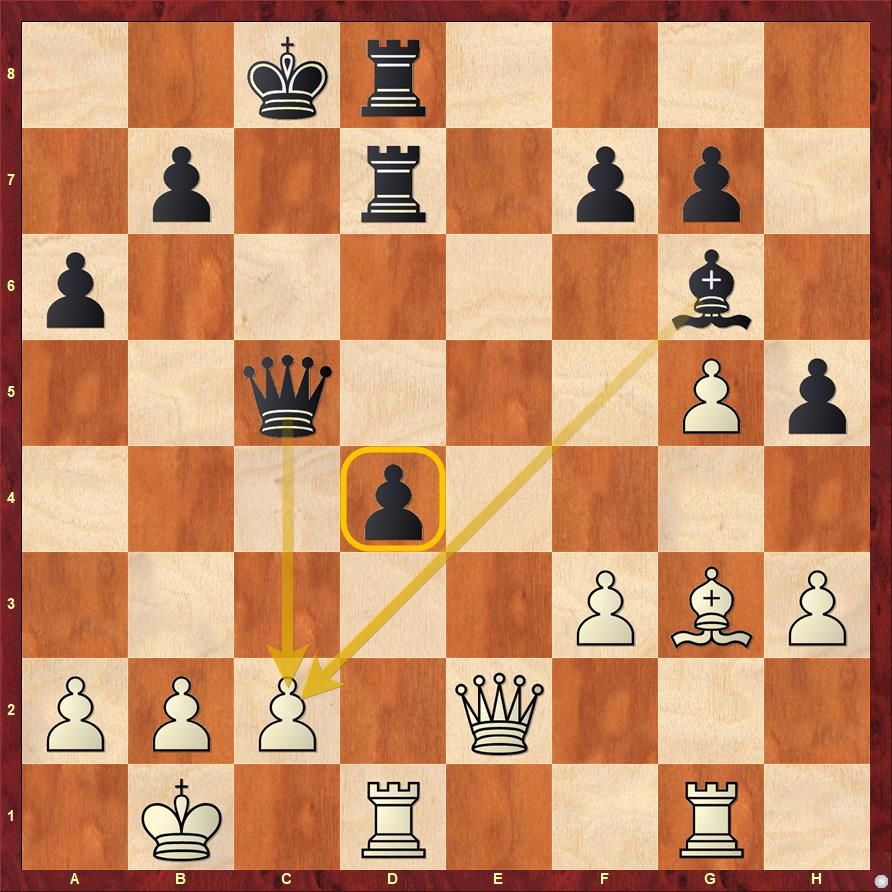 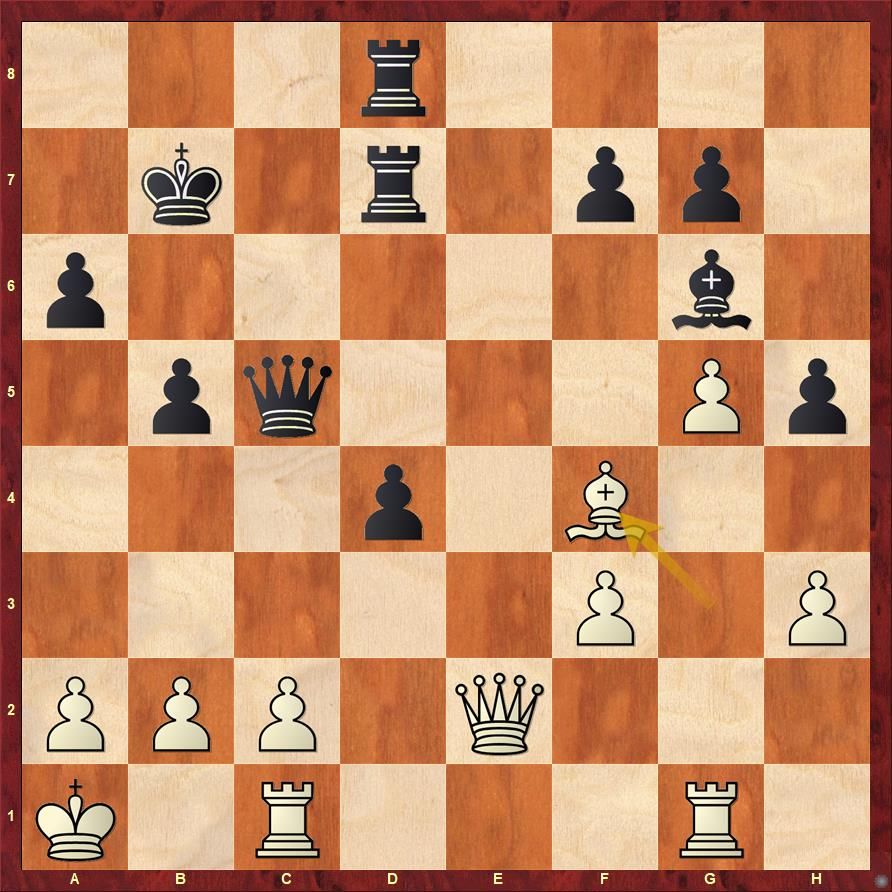 28.Bf4 It was here that White made the first "serious" mistake of the game. Can you find a way for Black to capitalize on it? 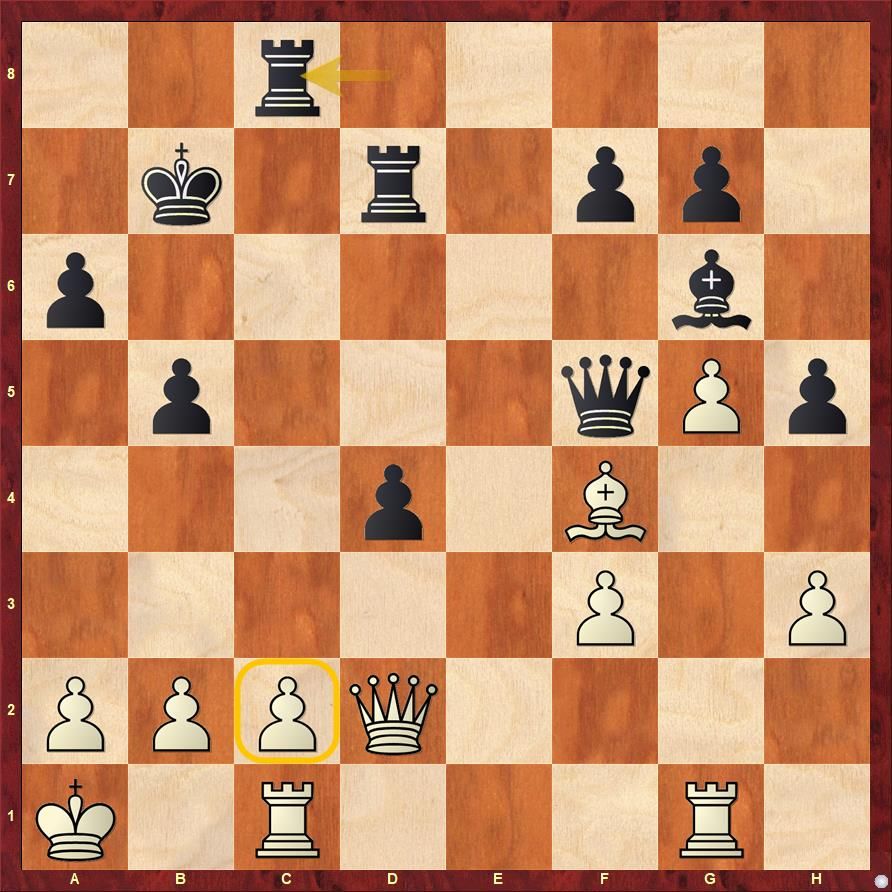 Position after 29...Rc8: Black systematically piles up the pressure on c2 and at an opportune time hopes to get d3 in.

At this point White was already worse and it would have been best to just continue with 30.h4 but Nandhidhaa instead played 30.Rg2 which only quickened the fate of the game. Black simply took 30...Qxh3 and after 31.Rf2 Qf5 32.Bh2 Qd5 33.Re2 Bxc2 even the c2 pawn was picked. 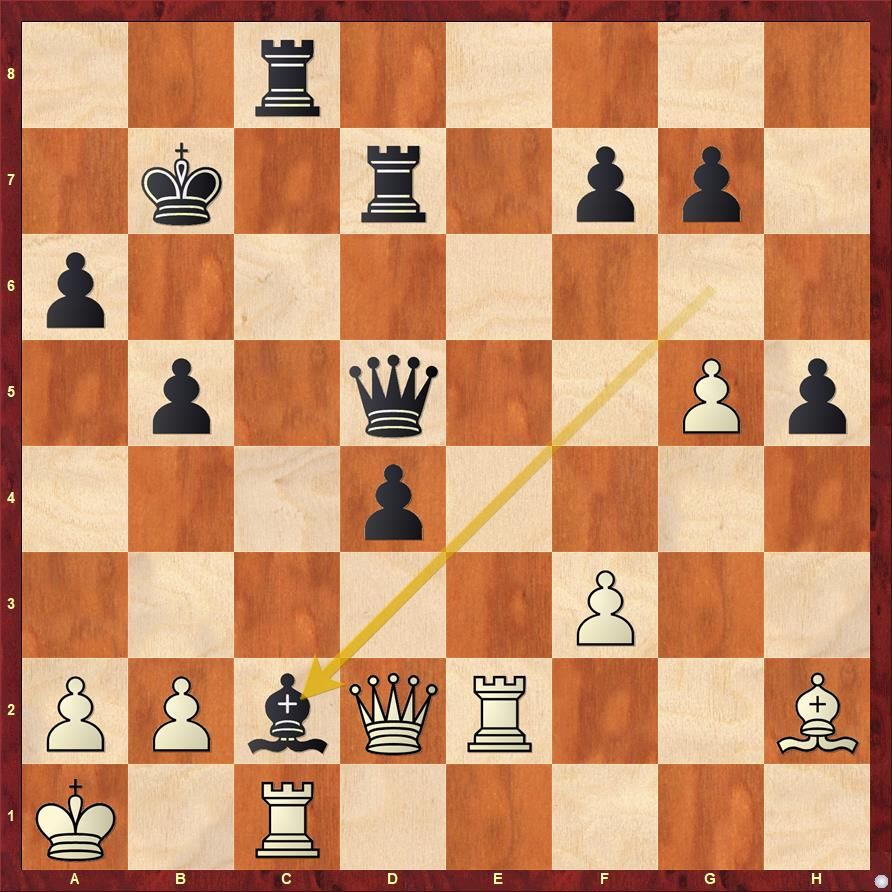 34.Re5 was played but now came 34...Qxf3 exploiting White's back-rank issues, 35.Rxc2 was still out of question because of 35...Qf1+ - thus, Black had three clear extra pawns. Unsurprisingly resignation came after only five more moves! 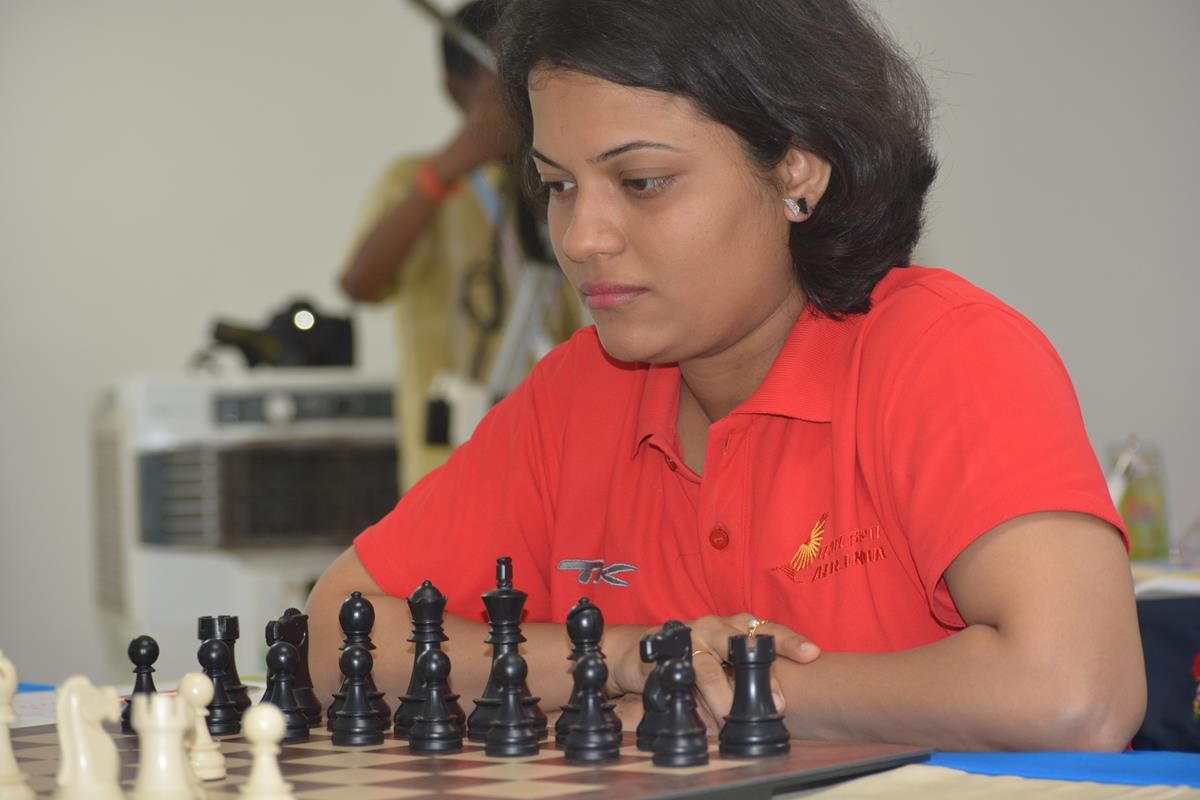 With her Scandinavian victory Bhakti continues to remain in the sole lead with an impressive score of 7.5/8 | Photo: IA Gopakumar Sudhakaran

With only three more rounds remaining it will be exciting to see if Bhakti can maintain her impressive run and win the event. Only half a point behind is Vantika Agrawal who too has managed to stay unbeaten so far in the tournament. In round 8 she actually found an easy victory against Michelle Catherina to stay at Bhakti's heels. Let's check out what happened in this game. 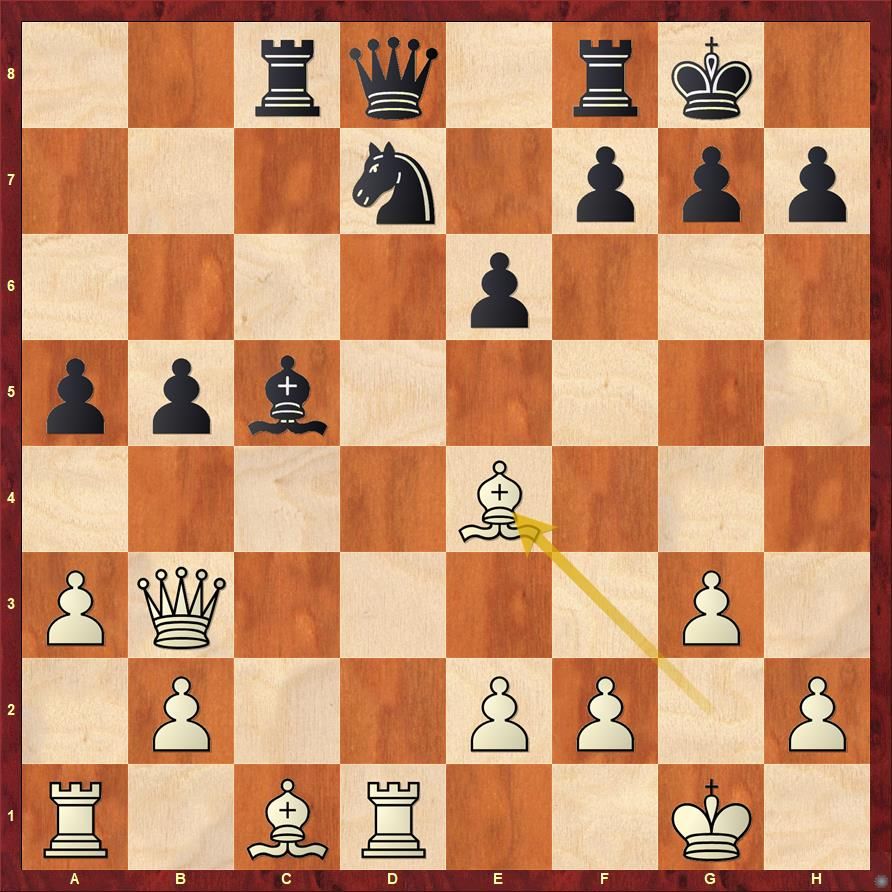 The above position was reached out of a closed Catalan. White does seem to have an edge here with the pair of bishops but things are far from being conclusive. 18...b4 19.axb4 Bxb4 is a fine continuation here that leaves about even chances but Black miscalculated a tactic here and went 18...Bxf2+ 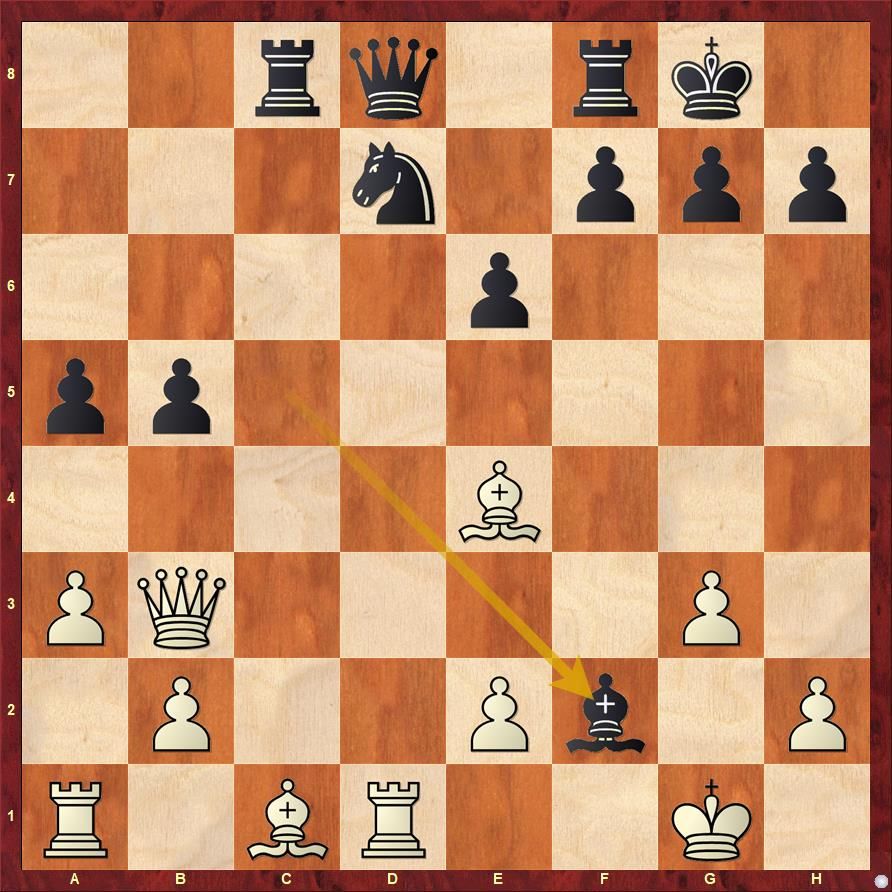 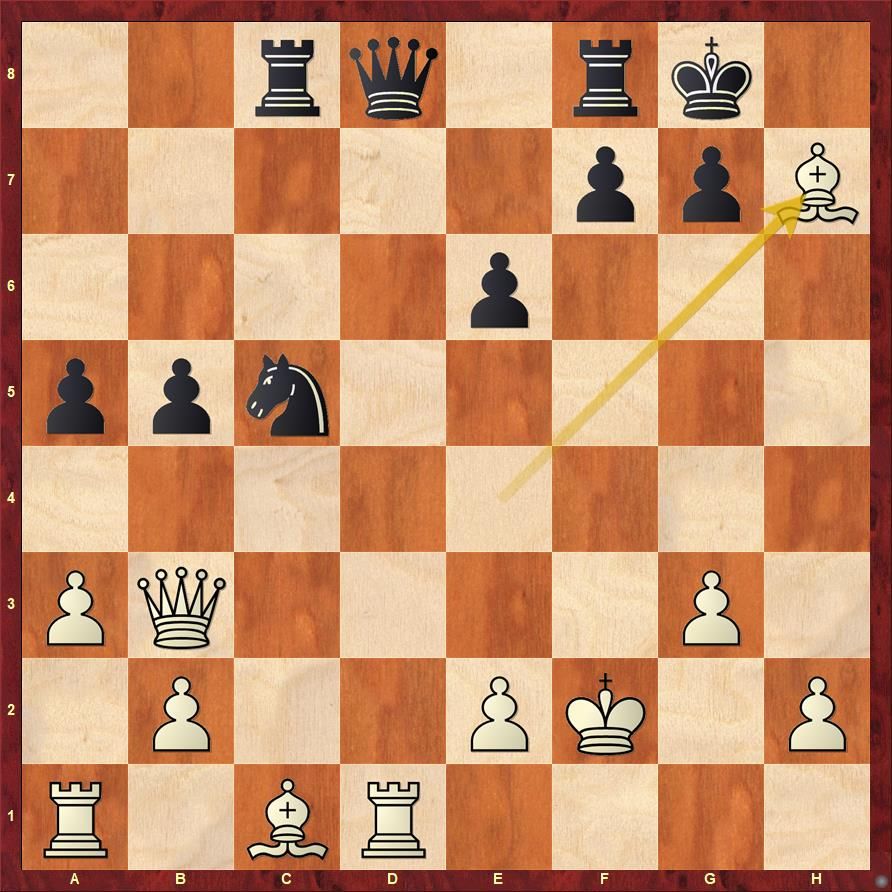 20.Bxh7+! is the only way for White to take the initiative and this is what Black overlooked! 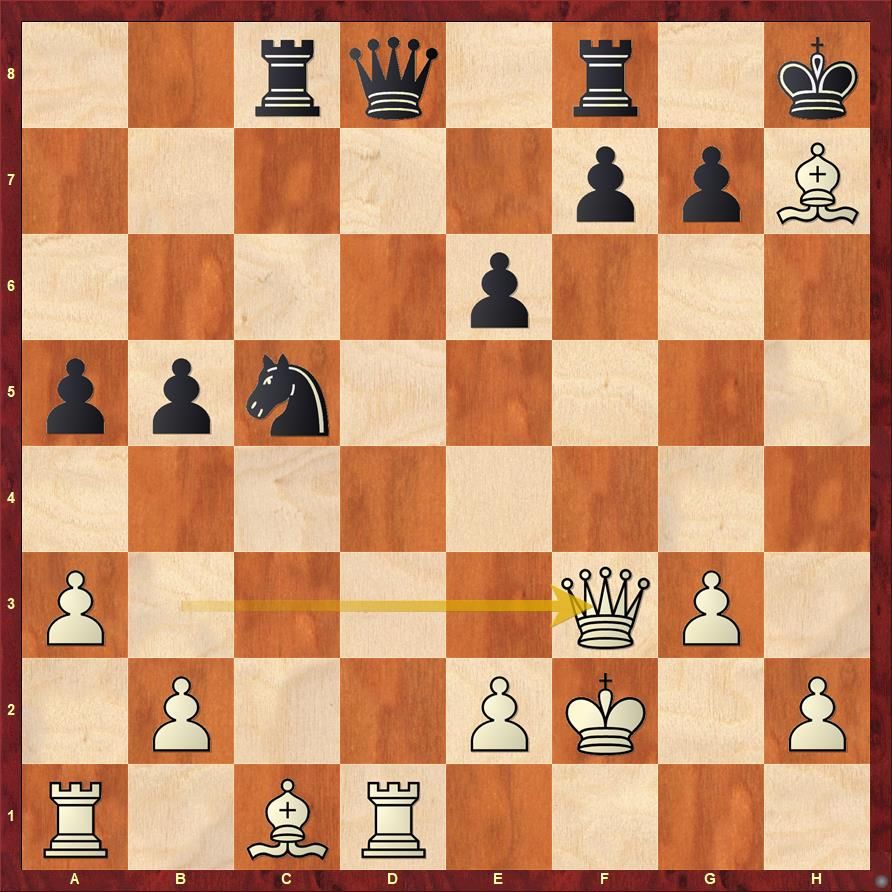 All tactics work in White's favour. Black can't go 21...Qxd1 as 22.Qh5 next comes with the threat of mate and all sorts of deadly discoveries. 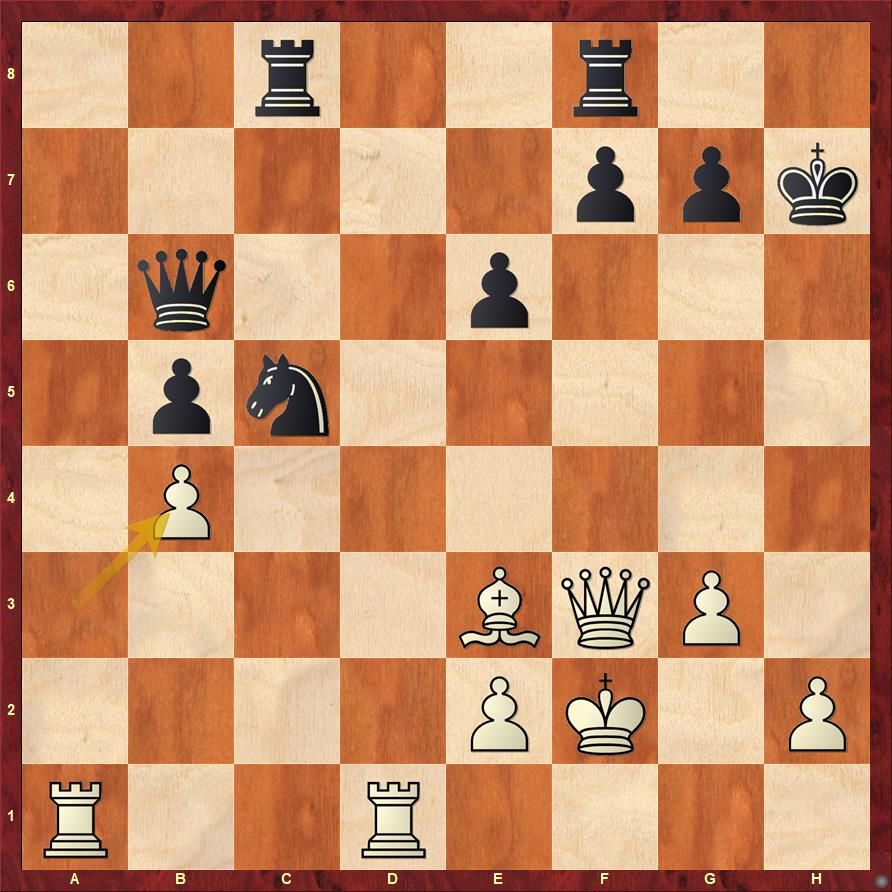 Black is simply losing the knight on c5 after 24.axb4 and ending up a piece down. 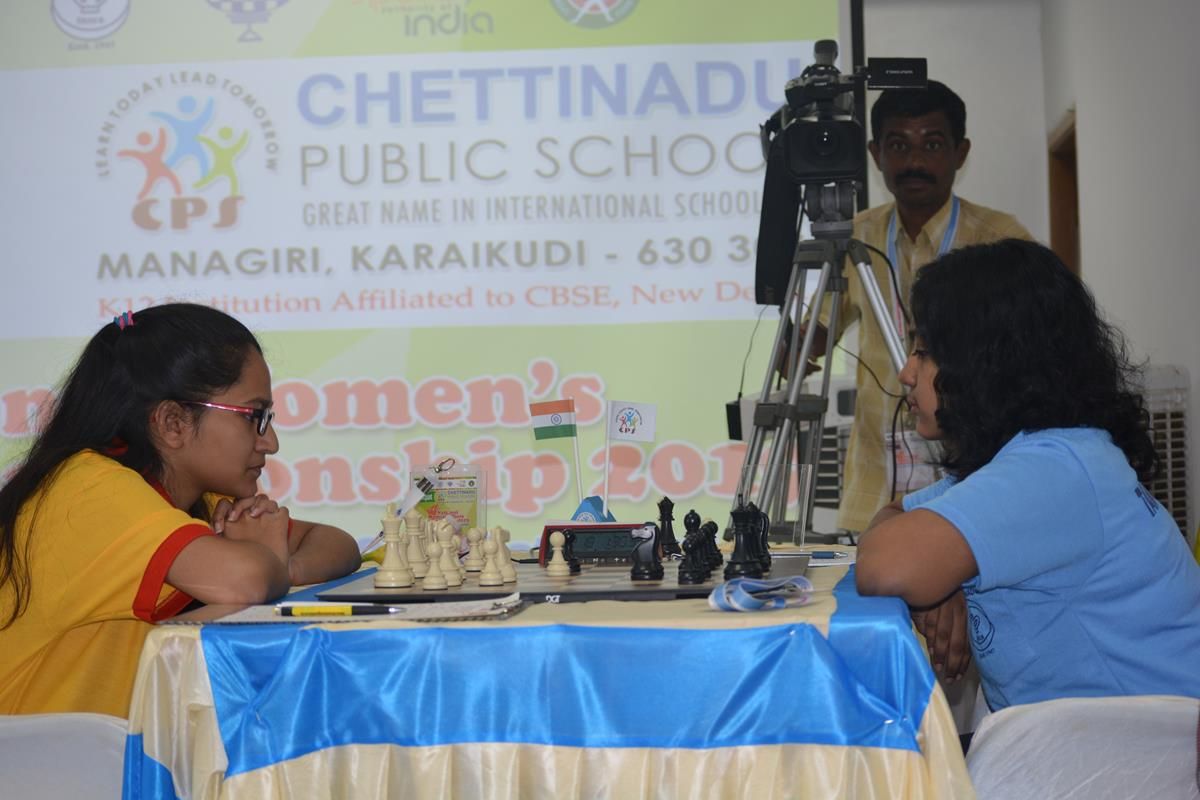 Is Chess 99% tactics? ... Well, after this game Michelle Catherina will agree! 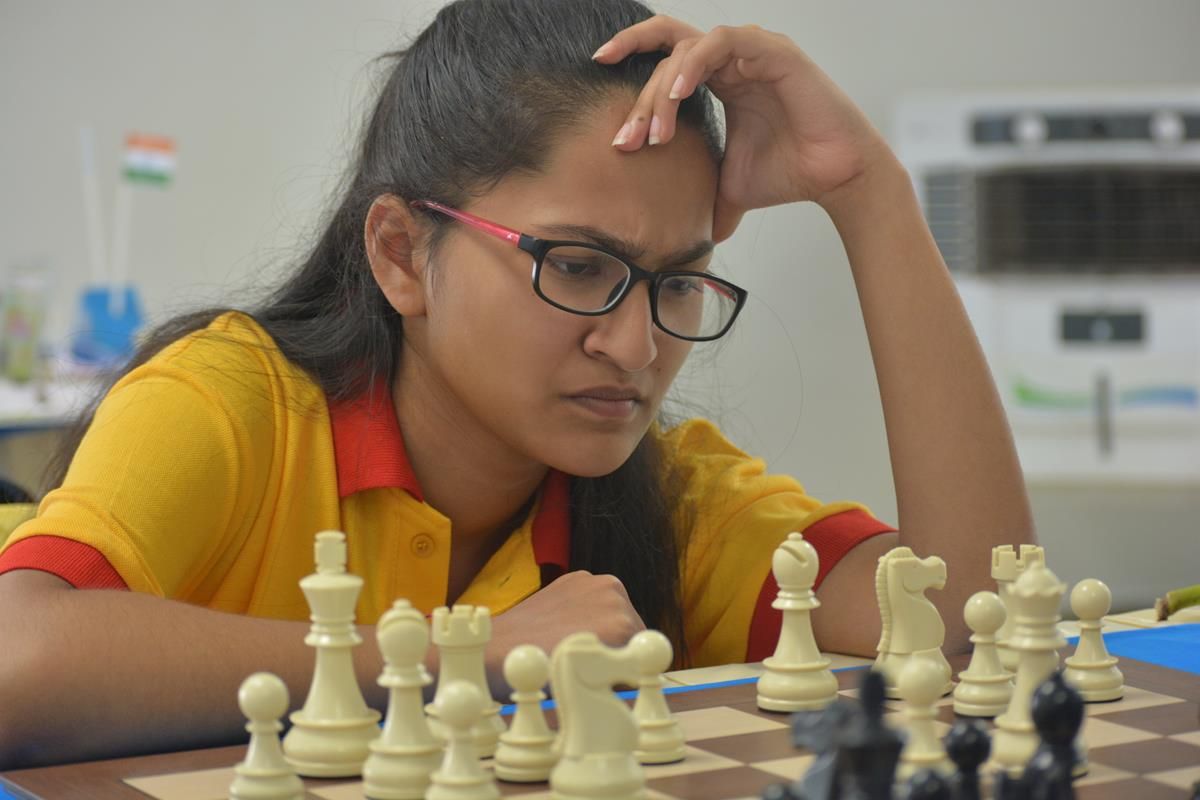 Earlier in round-5 Vantika had miraculously saved a lost game against Bhakti. She is making the most out of her opportunities and is all set to take the lead if Bhakti slips. | Photo: IA Gopakumar Sudhakaran 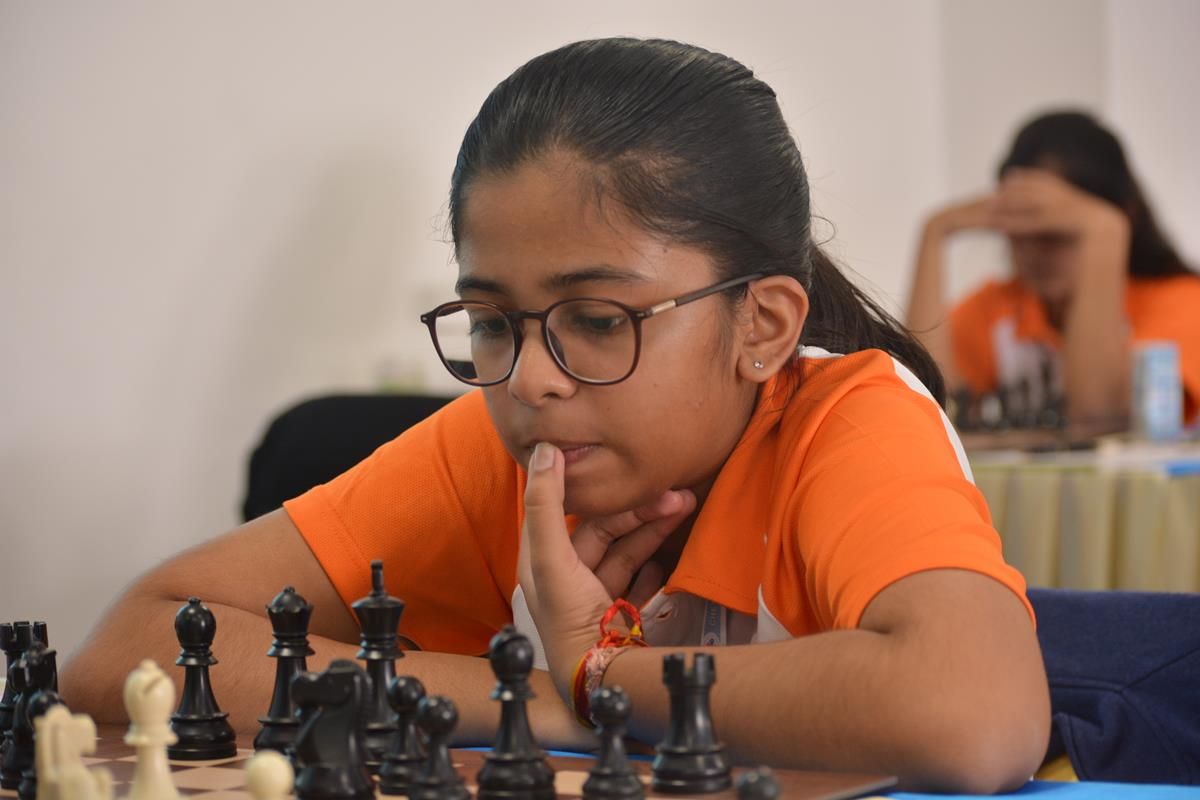 Mrudul Dehankar continues to make one upset after another as she clinched another victory against higher rated Srija Seshadri | Photo: IA Gopakumar Sudhakaran 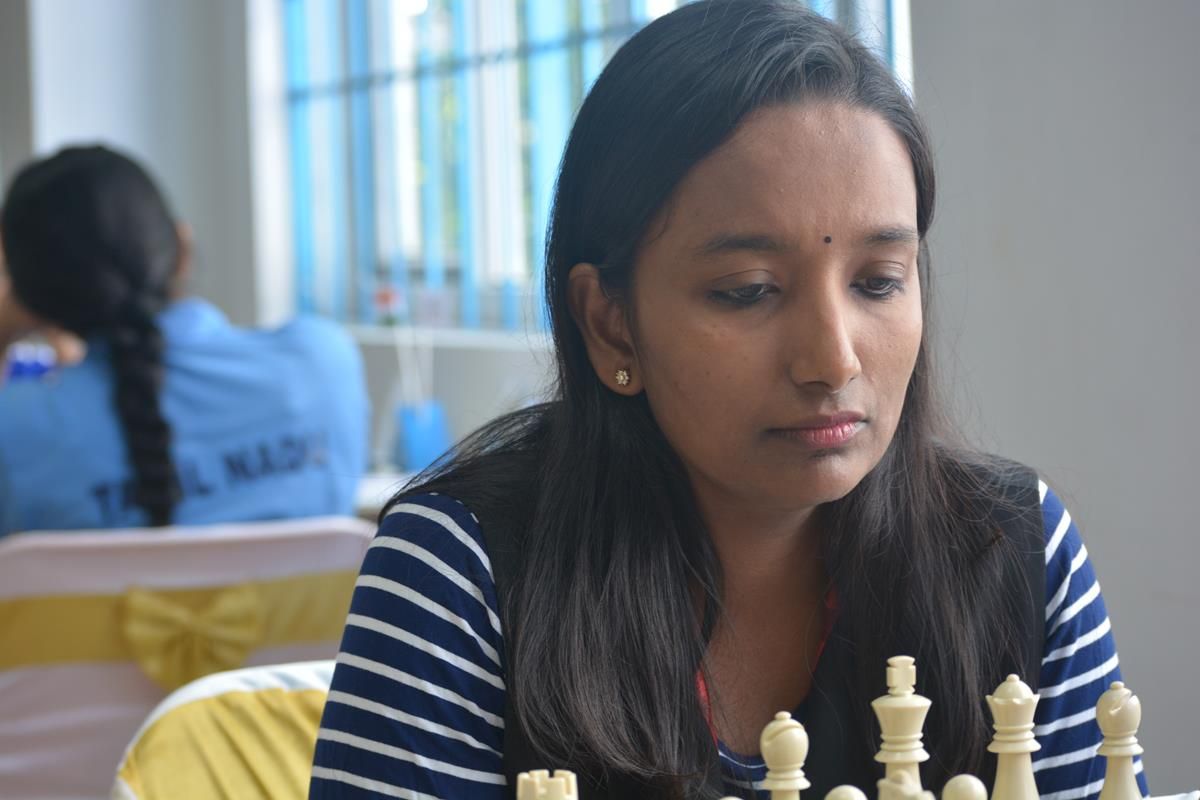 Meenakshi Subbaraman has won her last two rounds games. In round 8 she beat Pratyusha Bodda. In the next round she is up against Bhakti, what do you think would be the result of this game? | Photo: IA Gopakumar Sudhakaran 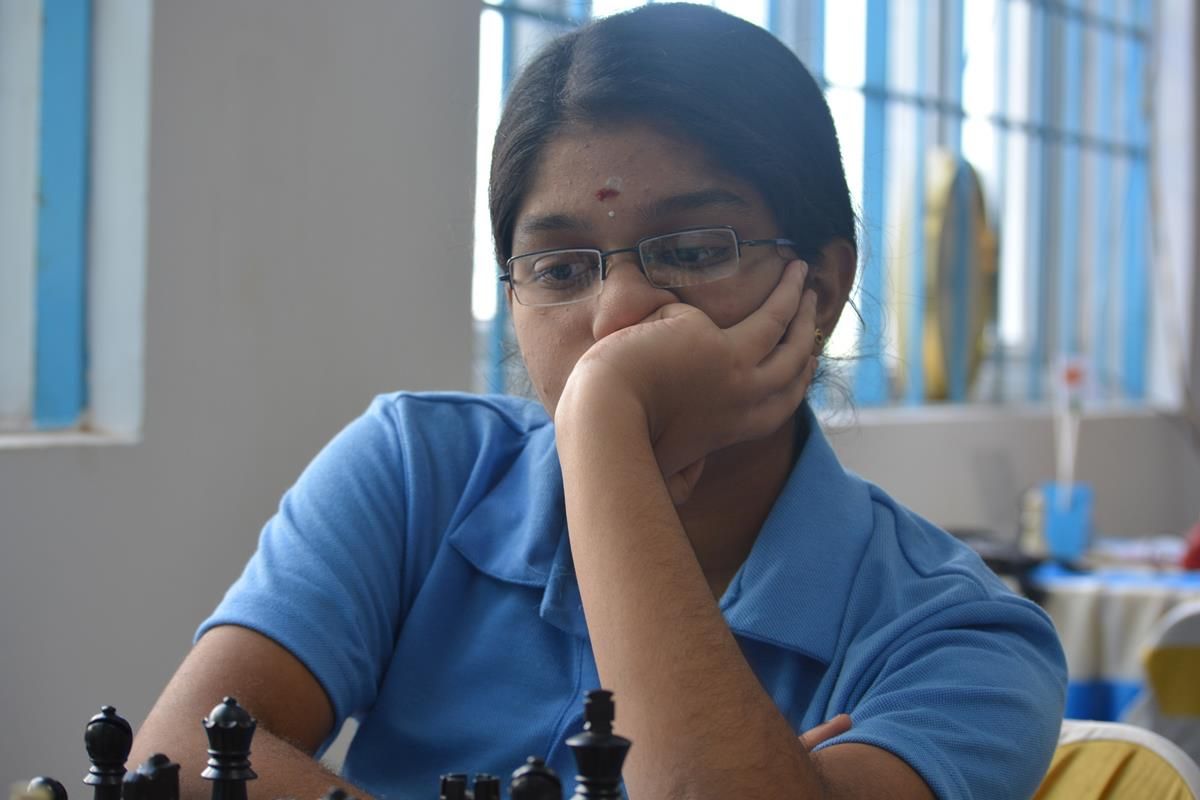 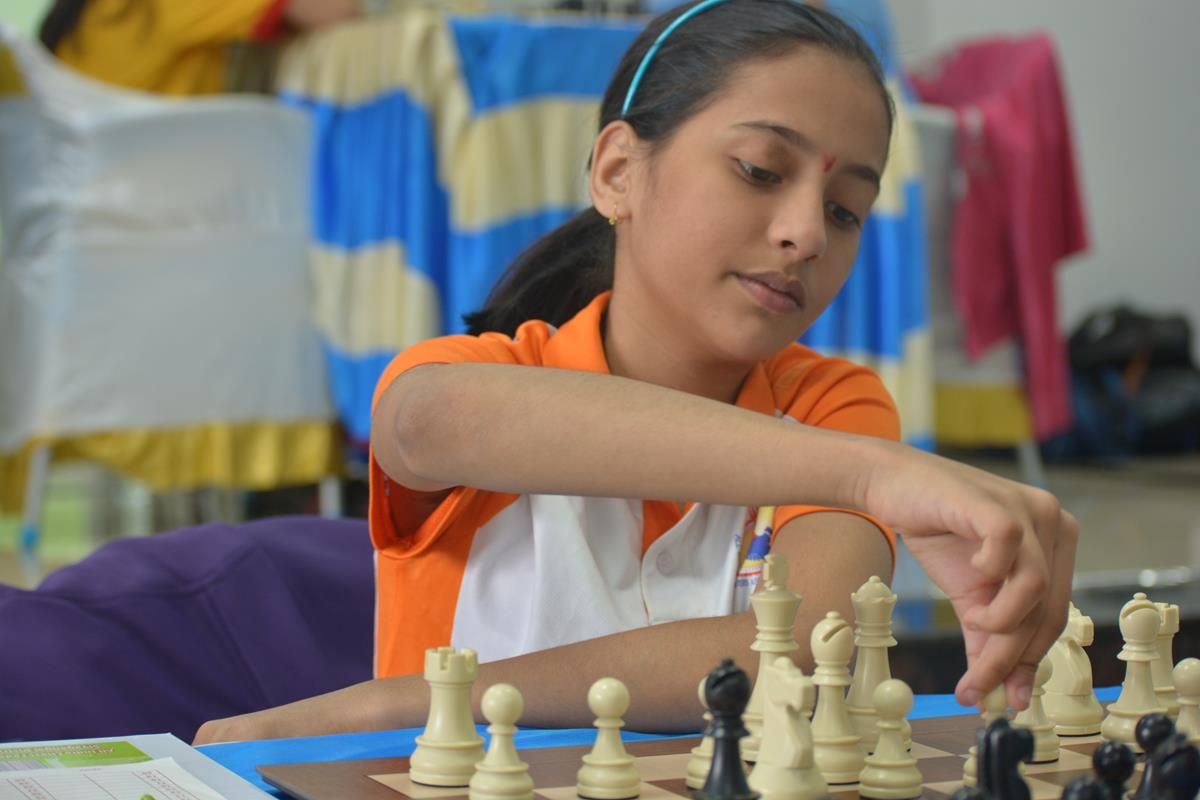 Divya Deshmukh won her eighth round game against Nityata Jain, the 13-year-old is now on 6.0/8 along with Soumya Swaminathan, Priyanka K, and Mrudul Dehankar | IA Gopakumar Sudhakaran

The ninth round of the event begins at 10 a.m IST today. Follow live.