The second day of the 46th National Women Chess Championship 2019 saw celebration amidst struggle. It was a hectic double rounds day with the second round starting at 9 a.m and the third at 4 p.m but the players and organizers still managed to find time for International Chess Day celebration. Speaking of the games, round-2 gave quite a few surprising results, the most notable among them being  WCM Jyothsna L's victory with black pieces over WIM Srija Seshadri. In the same round Nandhini Saripalli also pulled off an upset by beating WIM Pratyusha Bodda. Going into the third round, top-seed IM Soumya Swaminathan was held to a draw by WIM Harshita Guddanti, while the defending Champion Bhakti Kulkarni registered yet another victory by defeating WFM Saranya J. In this report we bring you photos, analyses, and more. 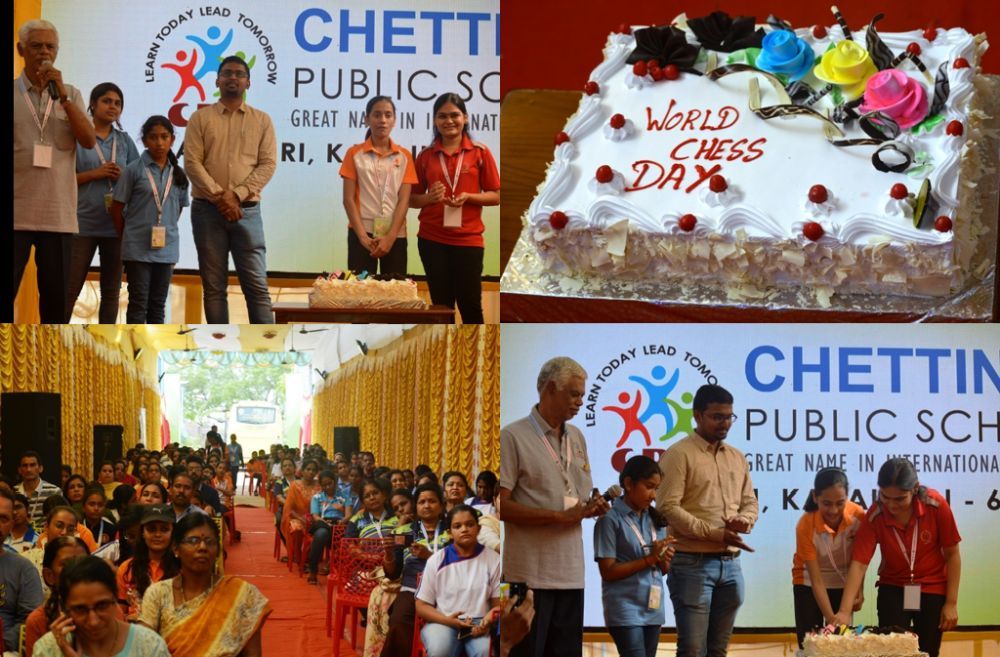 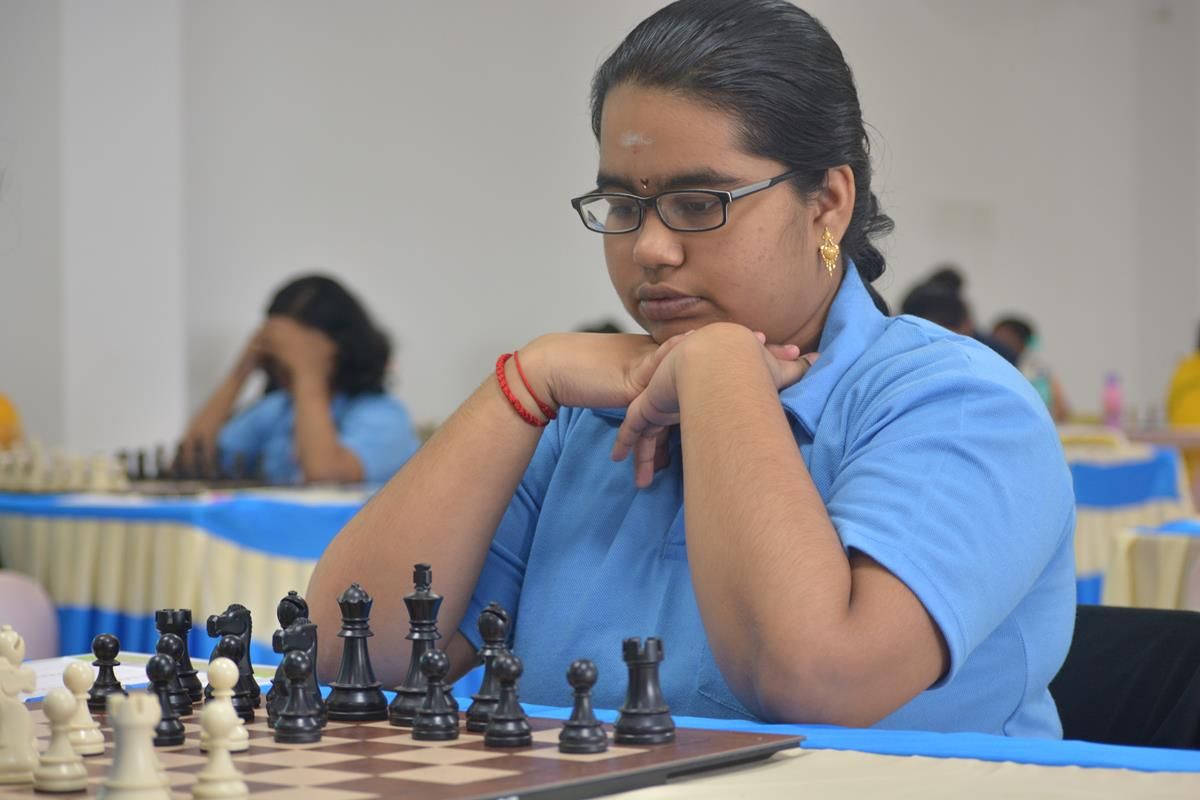 In the second round of 46th National Women Chess Championship 2019 India's recently minted WGM Srija Seshadri of Tamil Nadu suffered a shocking defeat in the hands of state-mate and WCM Jyothsna L. The latter had the Black pieces and chose the French defense against her opponent's king's pawn opening. The critical mistake of the game came as early as move 11 which gave Black a serious material advantage. On the 17th move however, Srija had an opportunity to make a comeback, but she missed her chance! 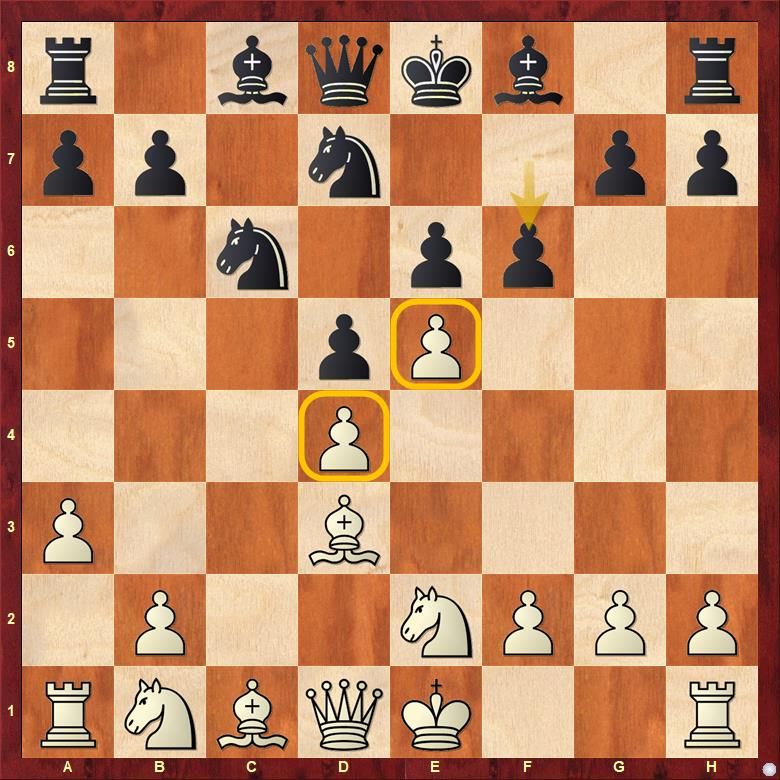 Position after 8...f6: Black wastes no time to challenge White's structure in the center. 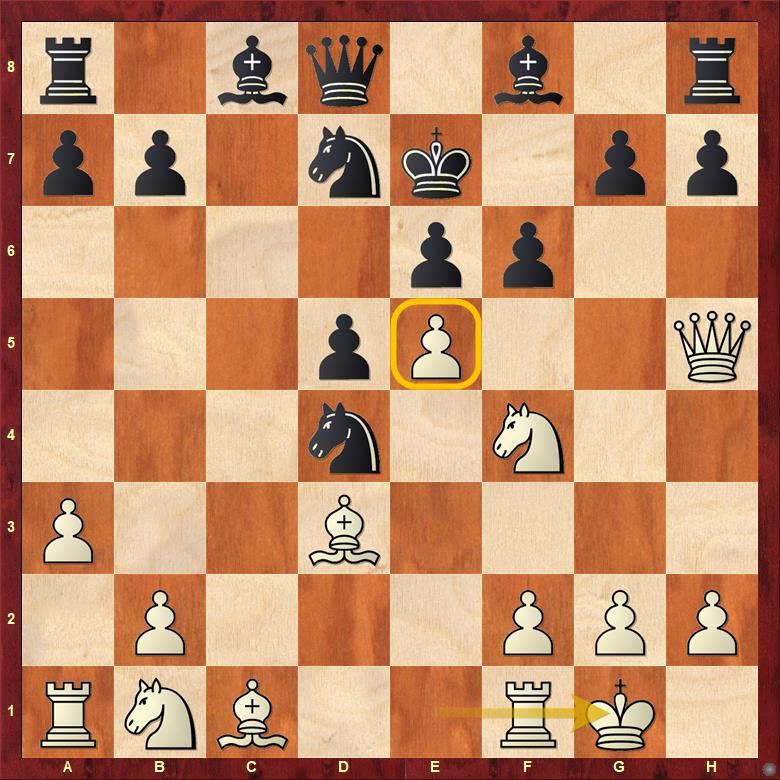 White gives up a second pawn on e5 for an attack on the kingside. But is 11.0-0 the best continuation? 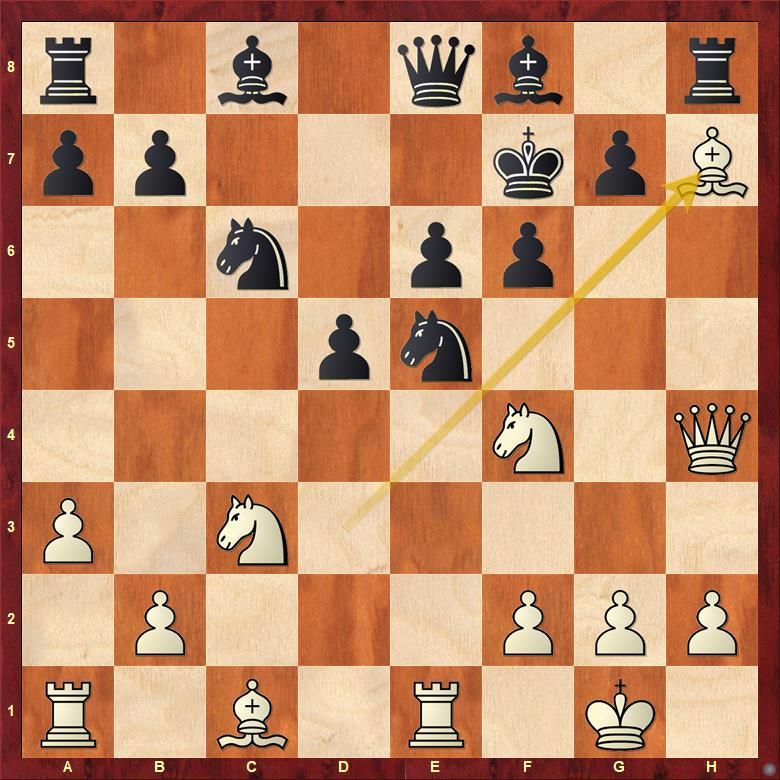 Position after 15.Bxh7: What is your assessment of this position? 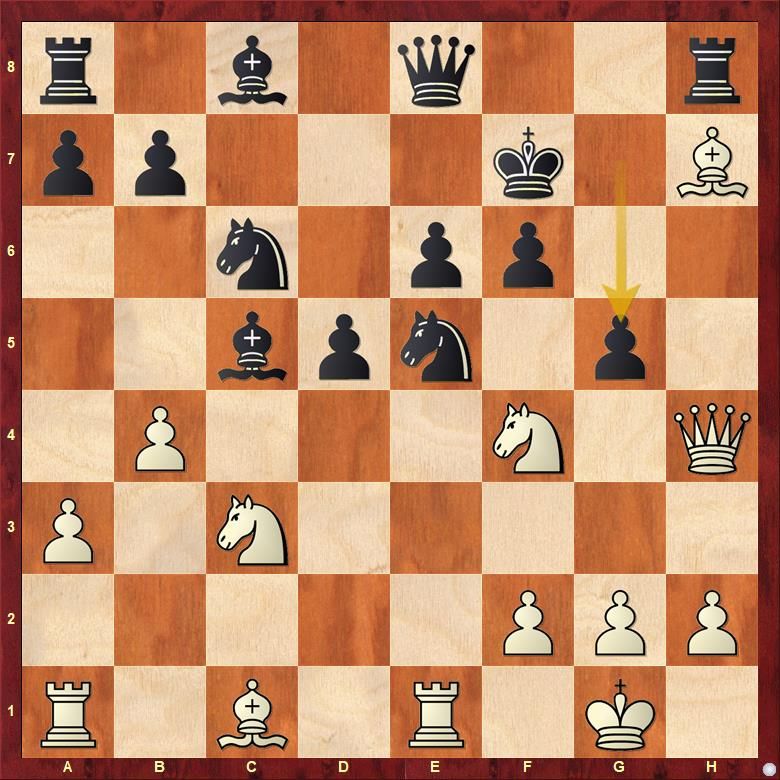 Position after 16...g5: Think about this position for sometime and try to calculate out the possibilities that can get White back into the game.

The correct continuation is 17.Qh5+ Kg7 18.Qxe8+ Rxe8 19. Nh5+ Kxh7 20. Nxf6+ (fork) Kg6 21.Nxe8 and now it looks like White is up an exchange but after 21...Bd4 22.Bd2 Nc4 Black is actually able to pick up another piece and in the resulting position Black, with two minor pieces against a rook, is still better but White has sufficient chances. In the game however, Srija wasn't able to find this and played 17.Qh6 instead. After 17...Bxf2+ 18.Kxf2 gxf4 Jyothsna went onto win the game fairly easily.  The full game with annotations is presented below: 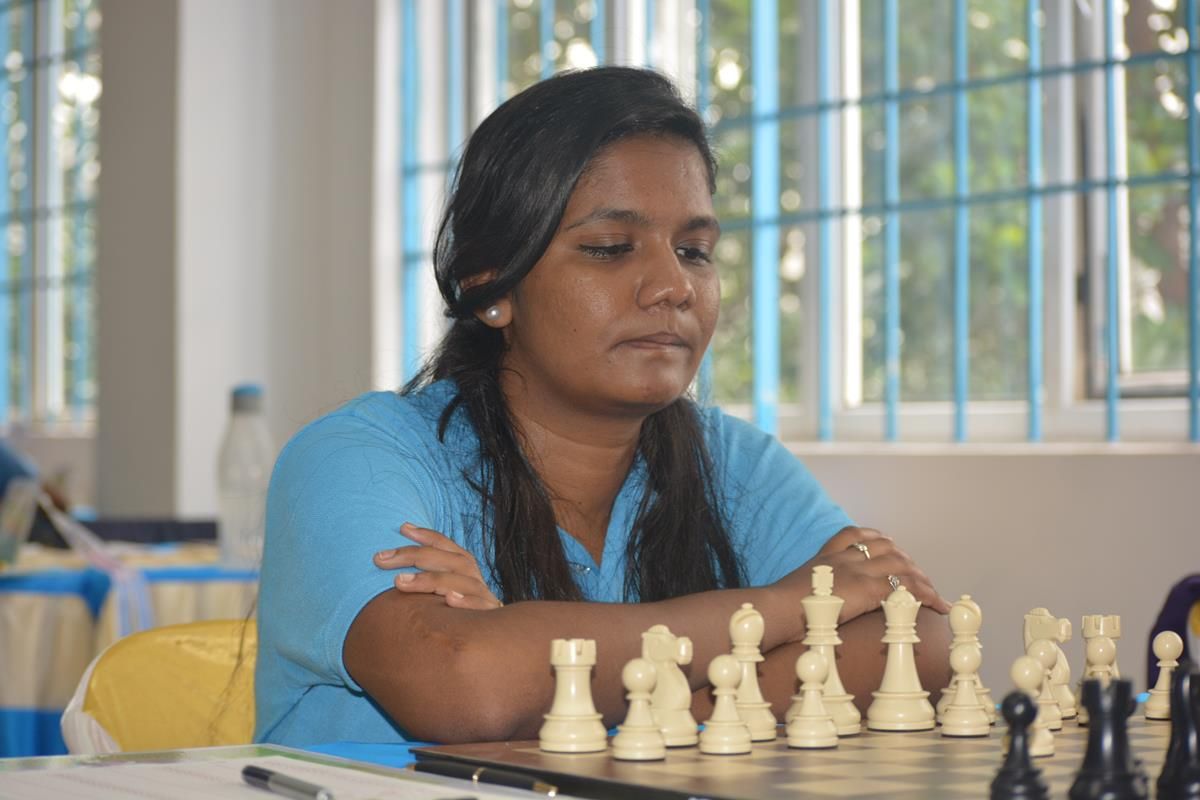 Saranya Y (1959), who recently won the second place at Goa GM B-category, held IM Vijayalakshmi Subbaraman (2357) to a draw in what was a 108 moves long game | Photo: IA Gopakumar Sudhakaran 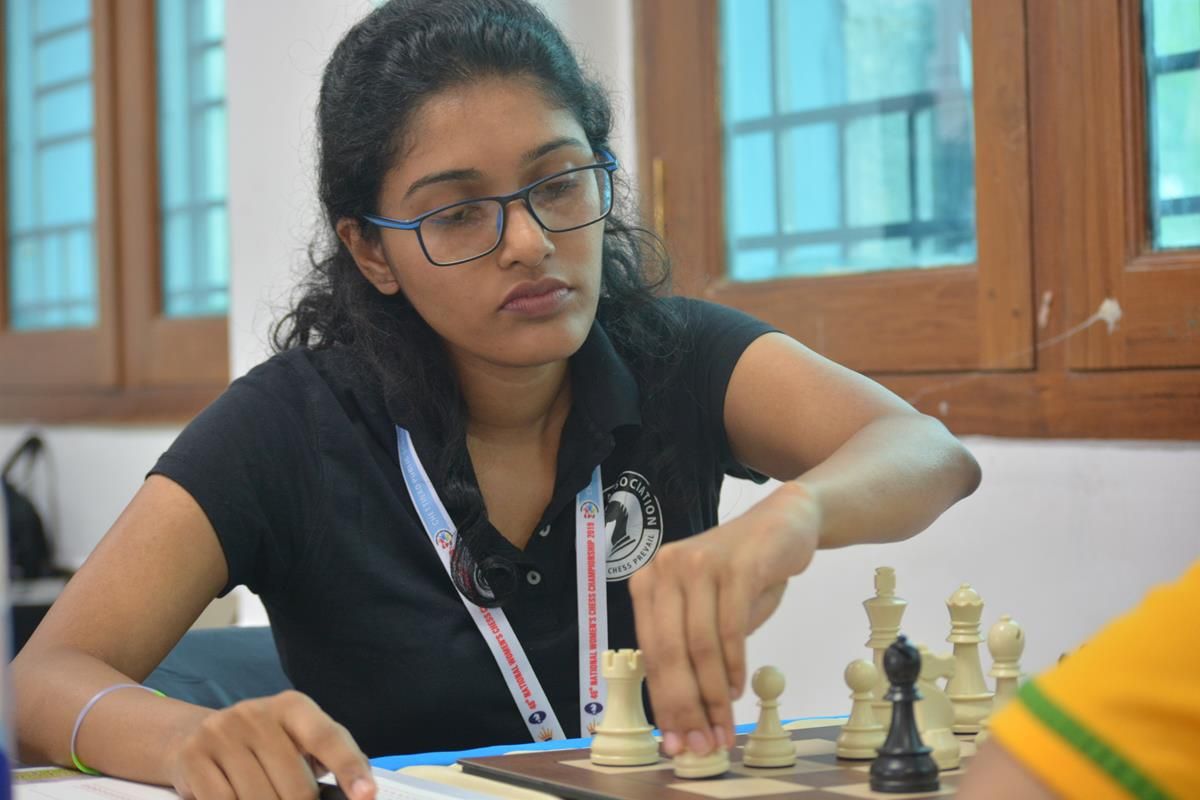 Another upset came in the form of Nandhini Saripalli defeating WIM Pratyusha Bodda. Nandhini had the White pieces and the game began with an Italian. The following position was reached after move 15. 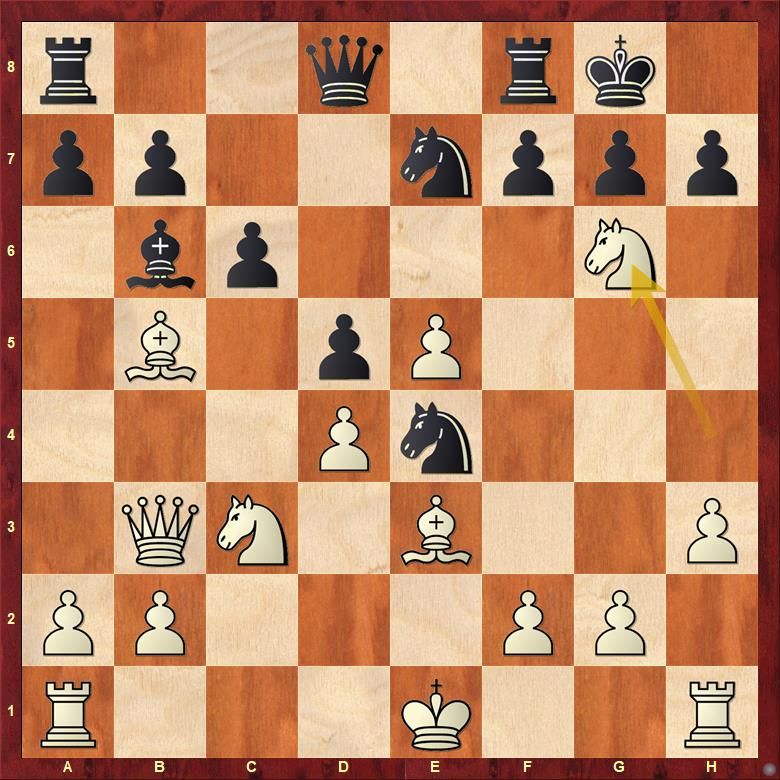 Position after 15.Nxg6: White has just taken a bishop on g6. How should Black recapture? 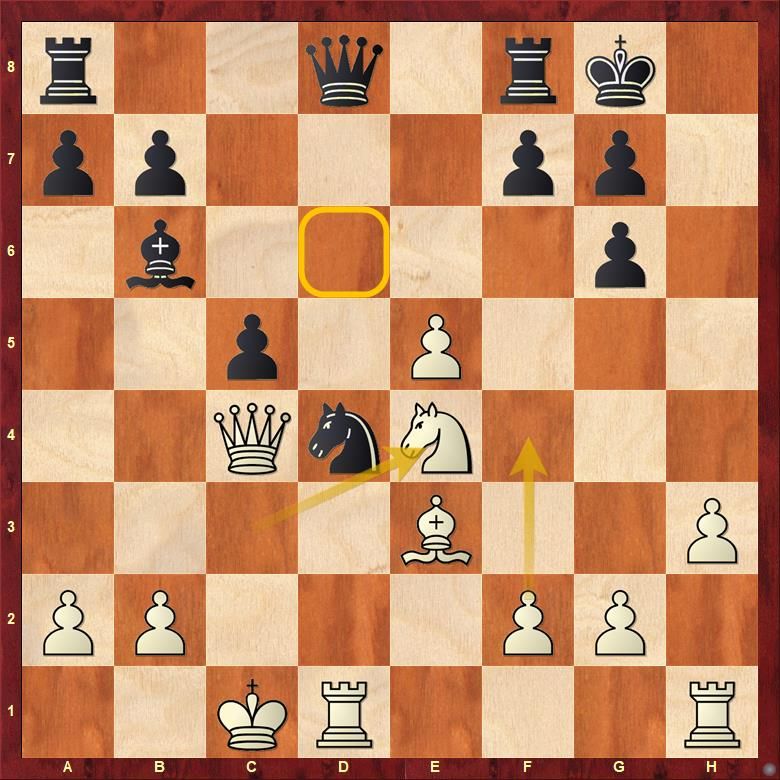 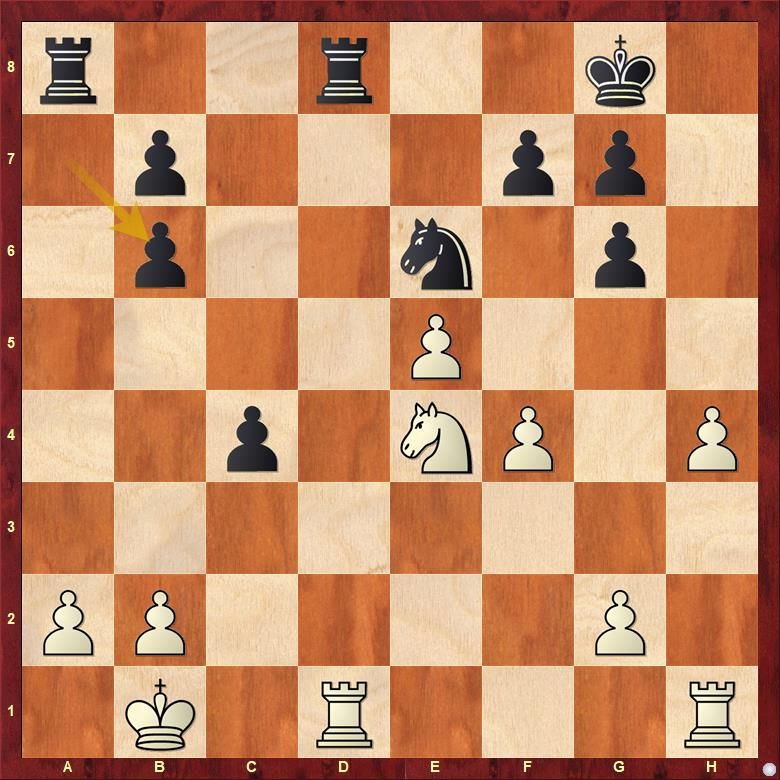 Black's kingside is hemmed in by White's nice f4-e5 structure. The e4 knight too is prepared to jump on d6 and pick up some pawns on the queenside, after which the a and b pawns will be ready to roll out! 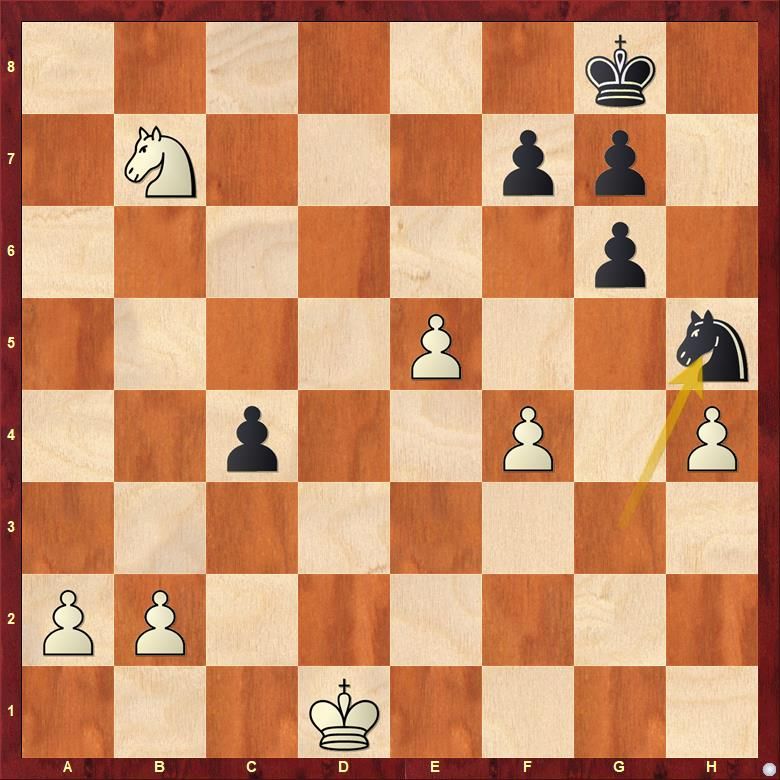 Position after 35...Nh5: White has achieved the desired plan, now there's no stopping the a-pawn. Not long after Black had to call it a day. 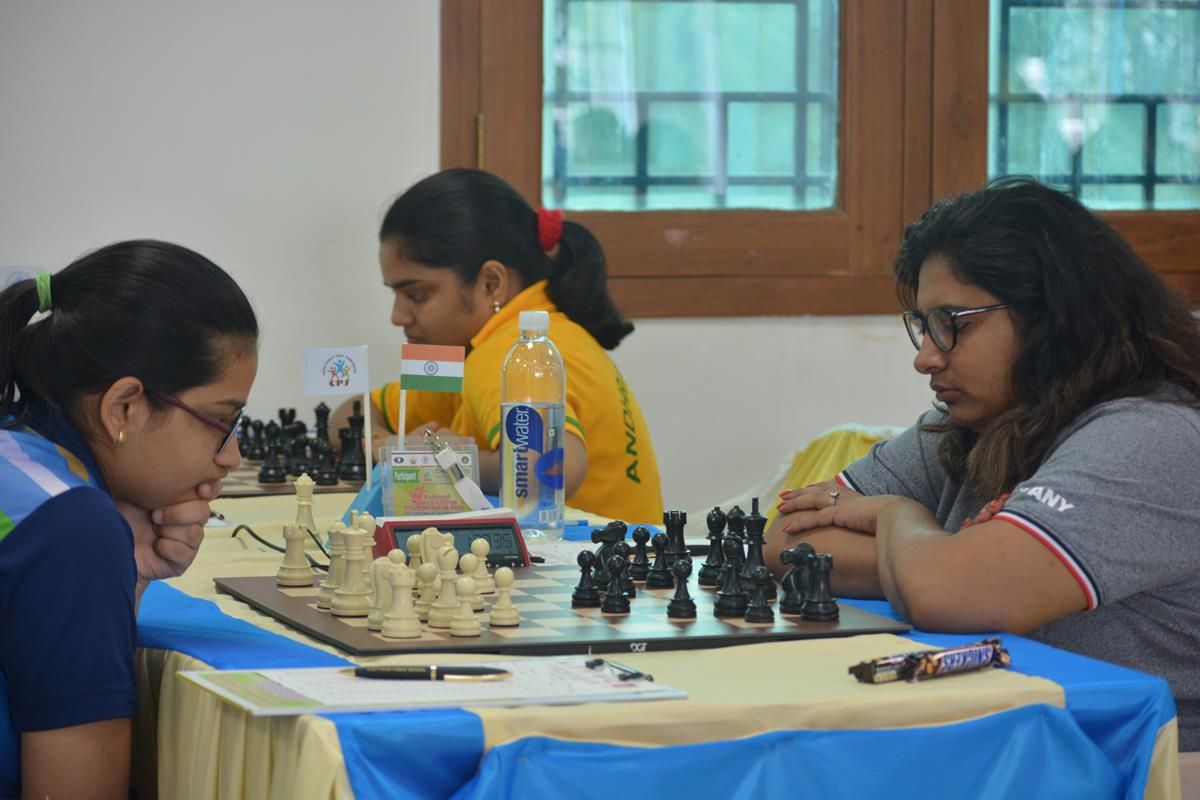 WFM Sanskriti Goyal (1948) held WGM Mary Ann Gomes (2303) to a draw with the White pieces. Sanskriti played the Nimzo-Larsen, starting with 1.b3 and going for a double fianchetto, something that Mary also likes to do with the white pieces! | Photo: IA Gopakumar Sudhakaran 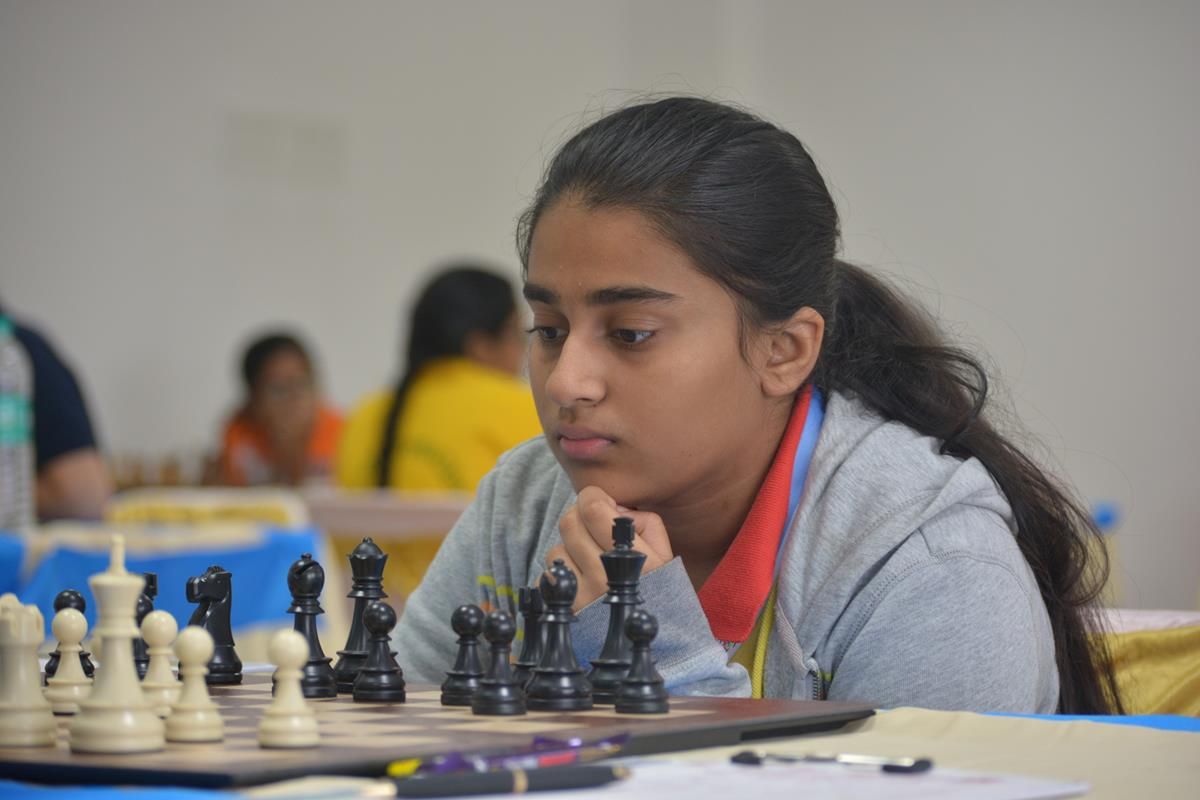 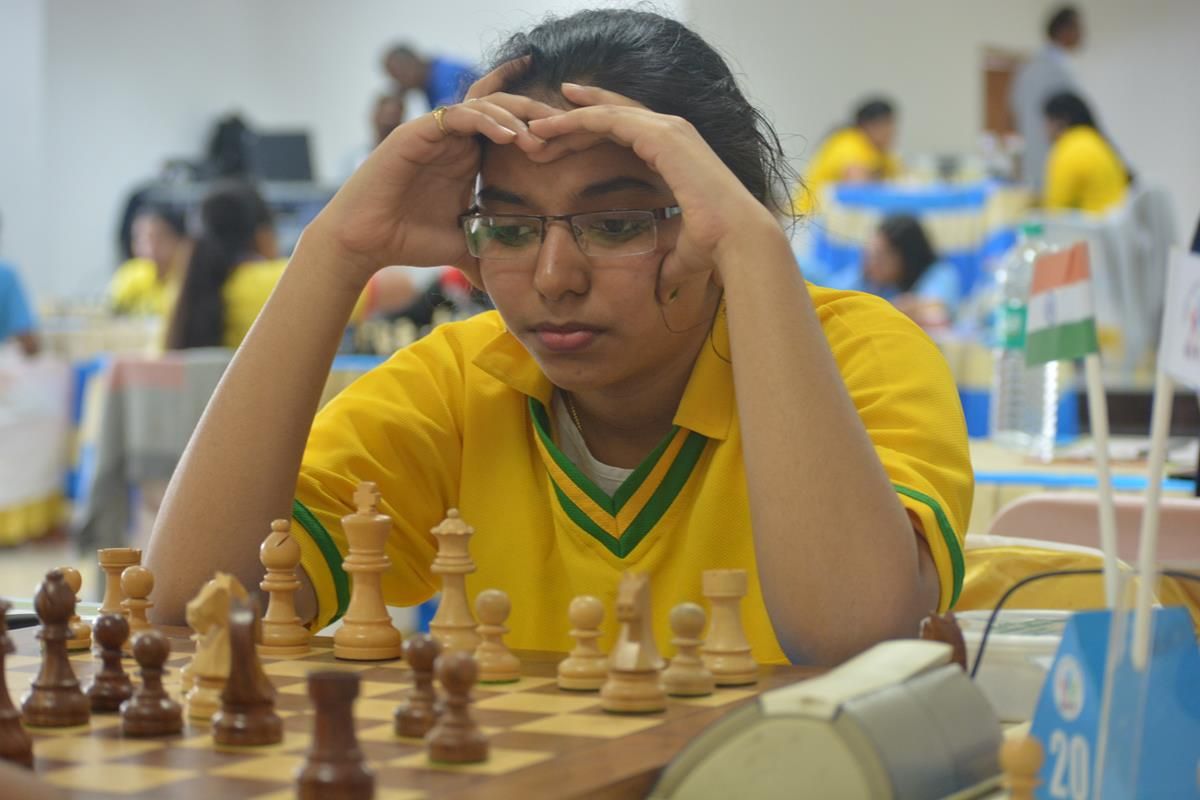 WIM Harshita Guddanti played a solid game with the White pieces to hold the top-seed of the event to a draw. Did you know Harshita is a former national under-15 champion? | Photo: IA Gopakumar Sudhakaran 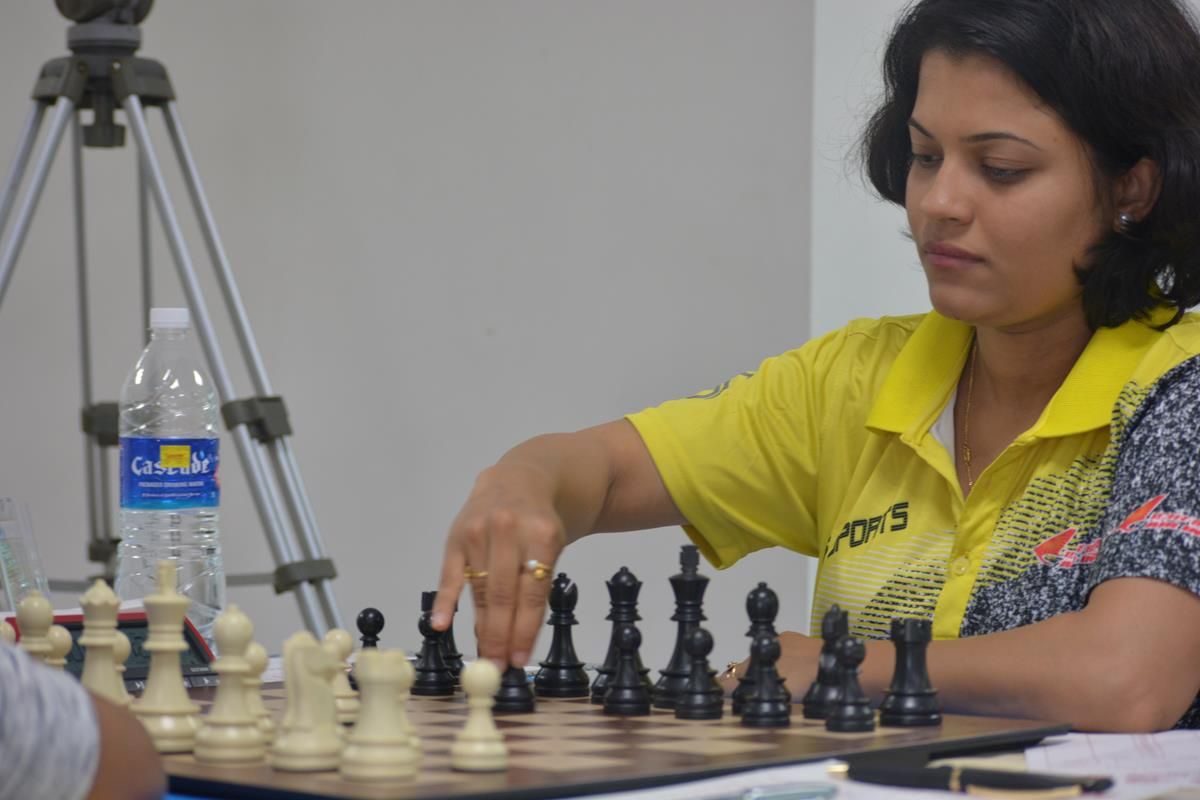 IM Bhakti Kulkarni, the defending champion of the event, has emerged as one of the leaders with 3.0/3. In the third round she beat WFM Saranya J with the white pieces | Photo: IA Gopakumar Sudhakaran 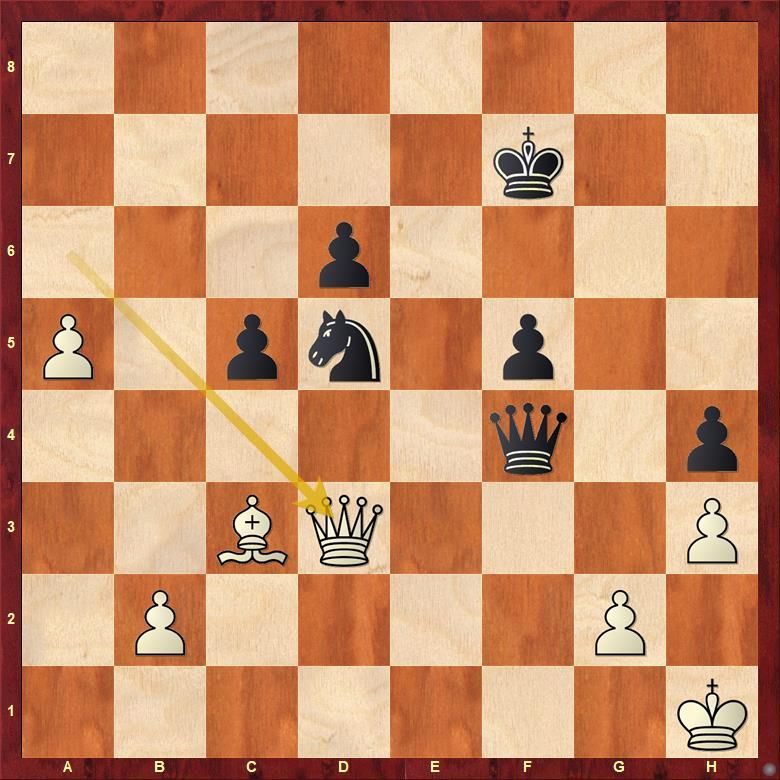 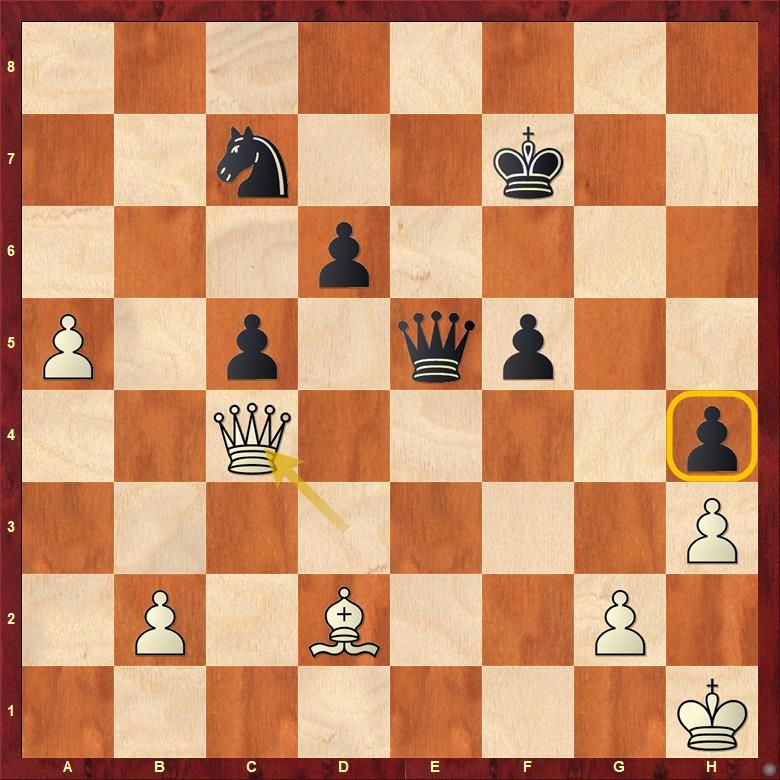 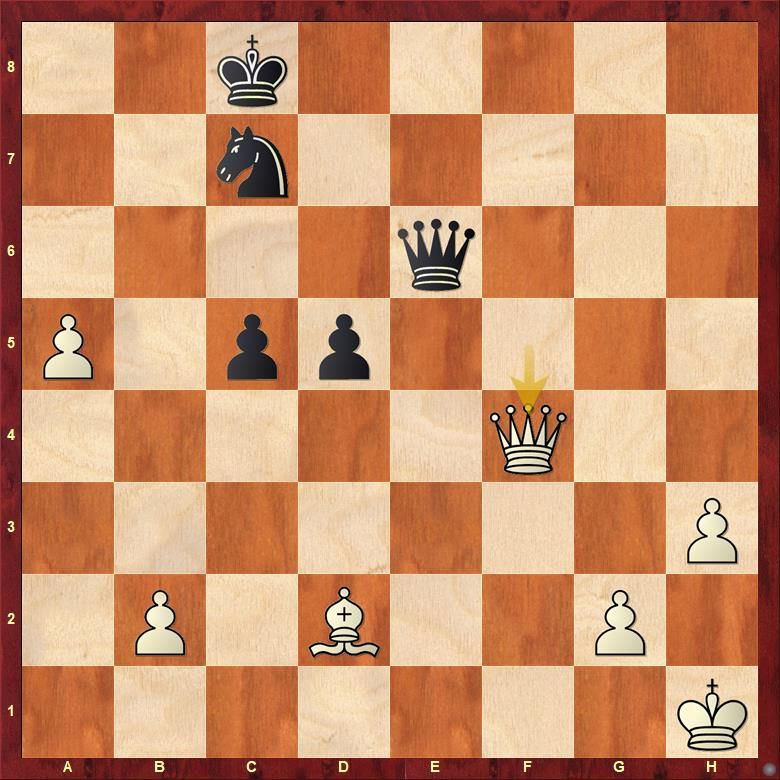 Position after 52.Qxf4 - White picked up another pawn, Black resigned after just four moves from here 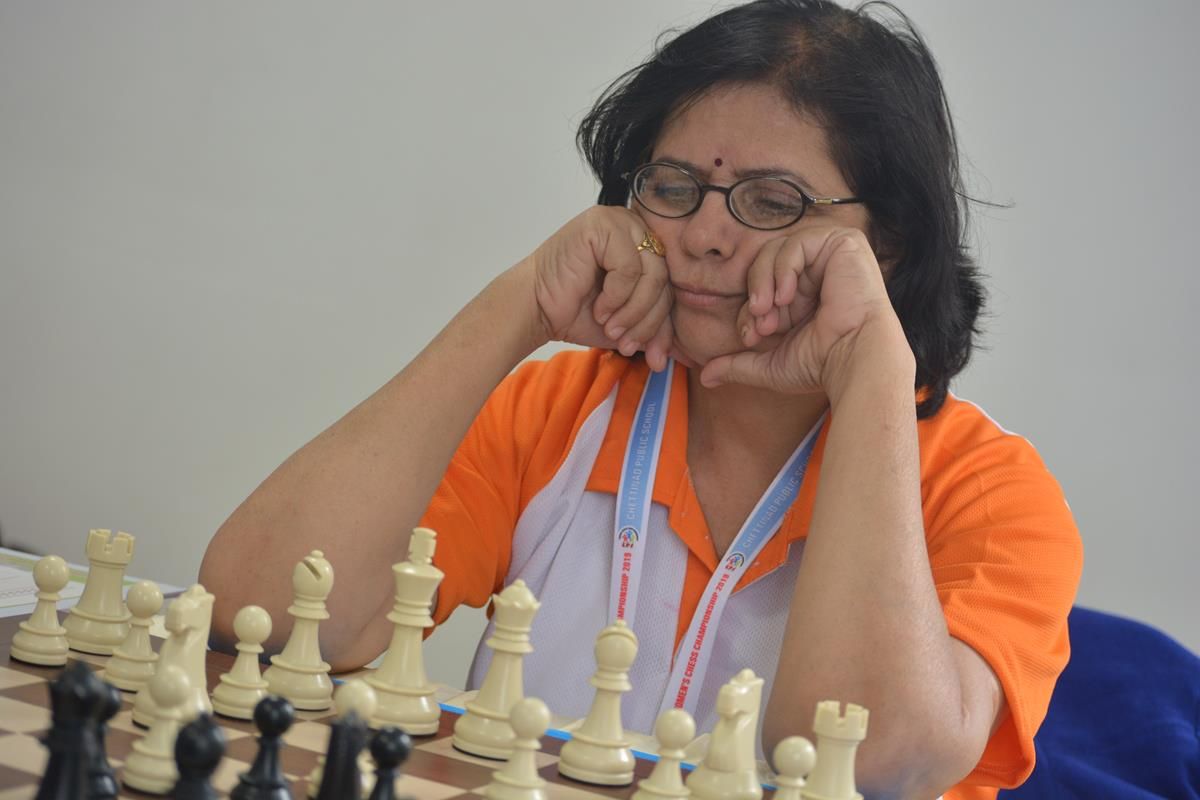 Playing Caro-Kann with the black pieces WIM Bhagyashree Sathe Thipsay won against Sunyasakta Satpathy. It's quite amazing to see Bhagyahsree fighting with the youngsters at the age of 58.| Photo: IA Gopakumar Sudhakaran 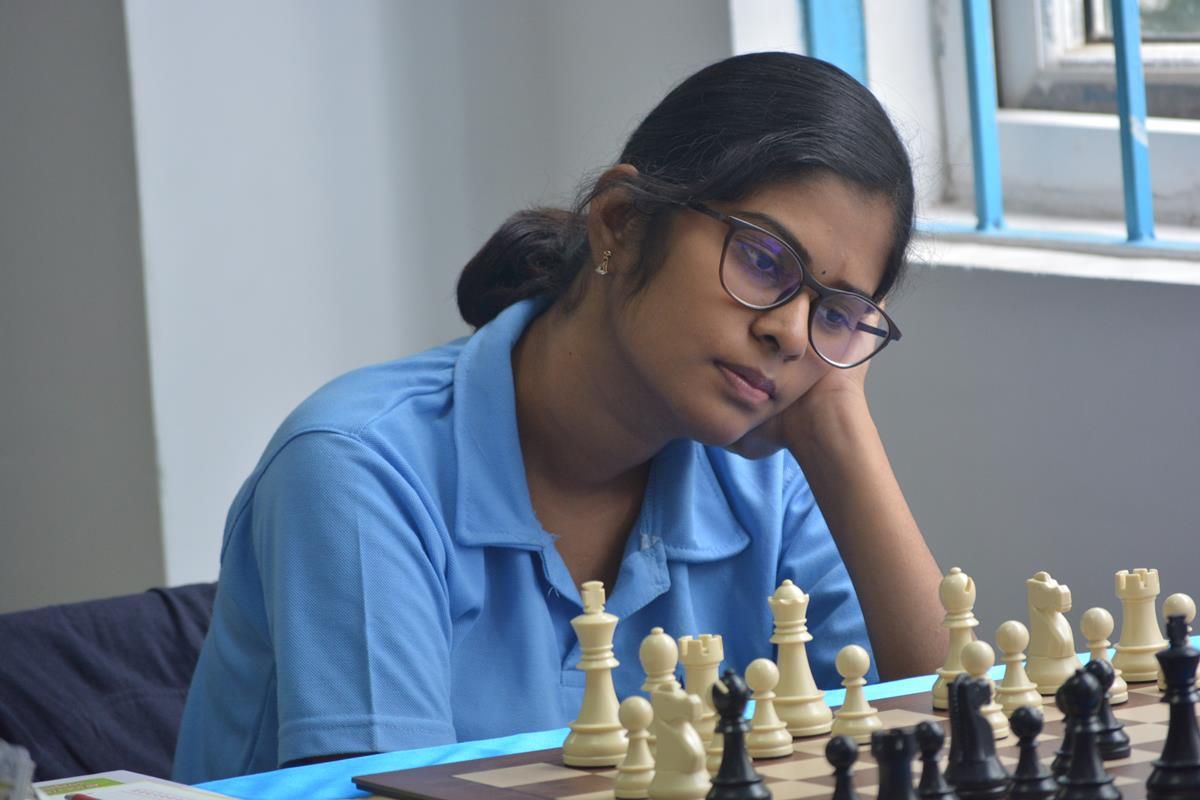 WIM Nandhidhaa P V won against Meenal Gupta playing a Sicilian Paulsen with black pieces. Nandhidhaa who recently scored an IM norm at the Paracin Chess Festival is definitely one of the favourites to win the title here. | Photo: IA Gopakumar Sudhakaran