It was a fantastic organizational effort by Bangalore North Chess Forum (BNCF) backed by Akshayakalpa, who sponsored the entire Grand Prix series. Seven events were held in Bengaluru which attracted players all across Karnataka. From each tournament 5-6 players qualified for the Grand Finale, which was held on the 17th of February at the BEL Officer's Club. The field consisted of the cream of Karnataka chess - Thejkumar, Girish Koushik and Antonio Viani (Stany was missing). The tournament was won by Gahan MG who played some fantastic chess scoring 6.5/7 and finishing half a point ahead of the field. Second place went to experienced IM Ravi Hegde, while GM Thejkumar was third. Hinduja Reddy, who was present at the venue, sends us a detailed report with pictures, game analysis and videos.

A total of 39 best to budding players of Karnataka competed for top 3 prizes in the Akshayakalpa-BNCF Grand Prix Finale held in AC Hall of BEL Officer’s Club, Bengaluru on Sunday. There were hefty first, second and third place cash prizes of Rs. 1,00,000, Rs.50,000 and Rs. 25,000 respectively. 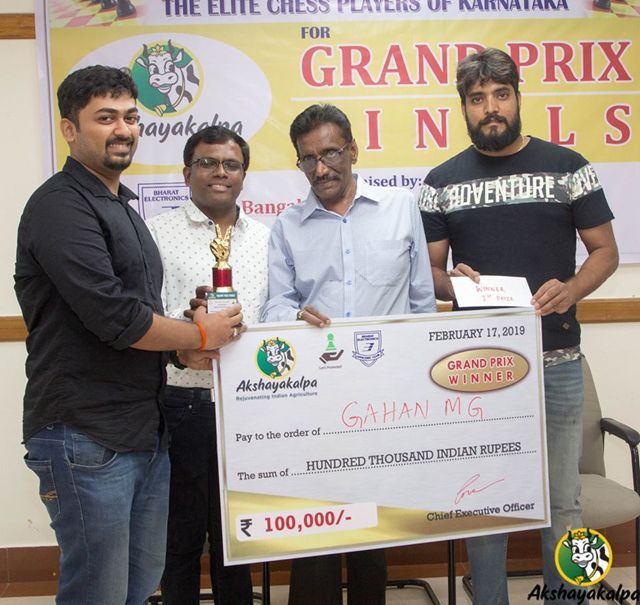 The winner of the Akshayakalpa BNCF Grand Prix 2019 - Gahan MG

FIDE Master Gahan MG nailed his first major tournament of the year with a winning performance. “To be frank, my aim was to finish in top 3 but I got good games. So, I’m happy and glad that I came first,” said Gahan in reference to his expectations before the tournament. The title Grand Prix champion and a cheque of Rs, 1,00,000/- was awarded to him. The 24-year-old was generally in control of all his games. Only in the final round, he was held to a draw by International Master Ravi Gopal Hegde—the 62-year-old veteran who went on to claim the second prize. While, Grandmaster Thejkumar M.S. of South Western Railways scored 5.5/7 points for the third prize.

Gahan's favourite game from the tournament was his win over the top seed GM M.S. Thejkumar. Check out the game below with some light variations and then listen to Gahan explaining the game in the video.

In this video, Gahan analyzes his favorite game of the tournament. 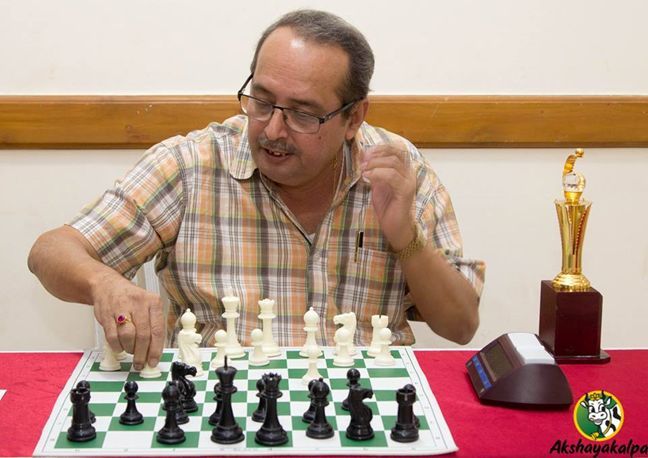 While youngsters struggled to cope with the pressure of high-stake games, the veterans played gallantly. Former Indian National B Champion, IM Ravi Gopal Hegde was one such player who didn’t succumb to any pressure. Born in a rural town of Coastal Karnataka in 1957, Ravi Hegde played for the Union Bank, Maharashtra in his prime years. Having played with the likes of Sasikiran Krishnan, Harikrishna Pentala, Surya Sekhar Ganguly and other formidable grandmasters of Indian Chess in 1990s; Ravi Hegde was also a contemporary of the five-time World Champion Viswanathan Anand in 1980s. Now retired, he plays chess for the love of the game.

The following game is one of his favorites. 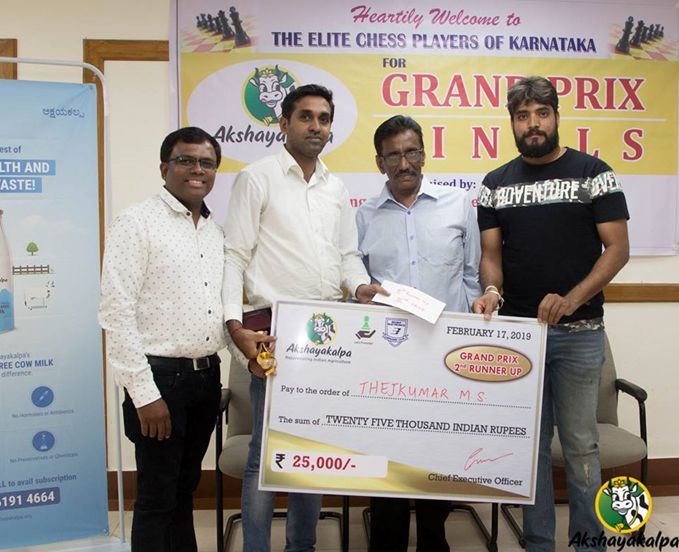 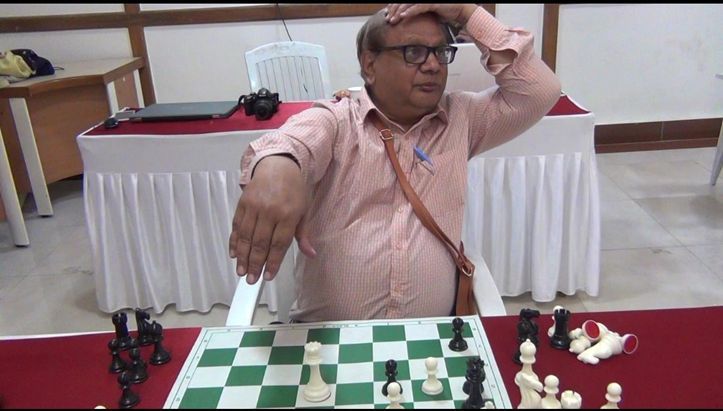 Declares Ravindran after the game, “I don’t care about my opponents, I go by the game." After losing his form in subsequent rounds Ravindran said, "I need to improve my stamina and resume my morning walks to put up against these youngsters.” Who said chess is only a mind sport! 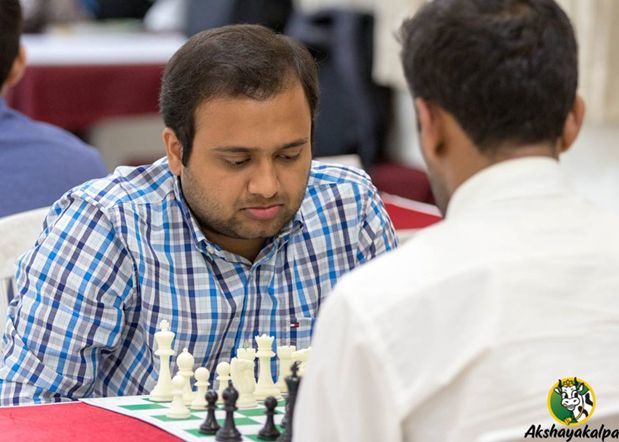 IM Girish Koushik had a forgetful event by his standards, as the 21-year-old had lost two games and finished fifth | Photo: Sandeep Kotian 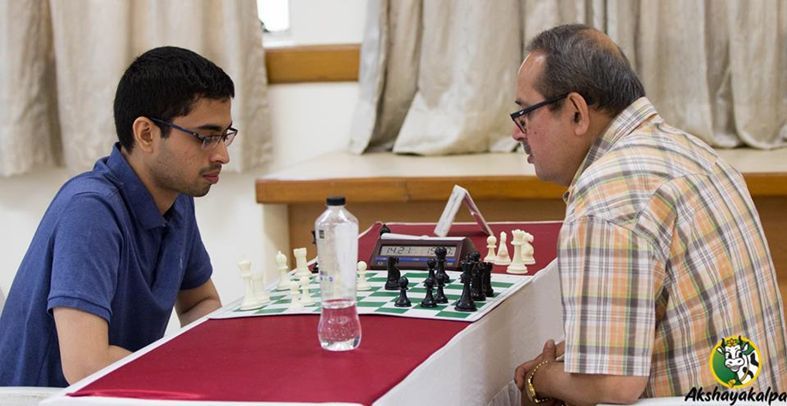 IM Viani D’cunha was in contention for the top-3 prizes until round 5. Loss in last two rounds to Gahan and Thejkumar didn't help his cause and he had to settle for the seventh spot | Photo: Sandeep Kotian 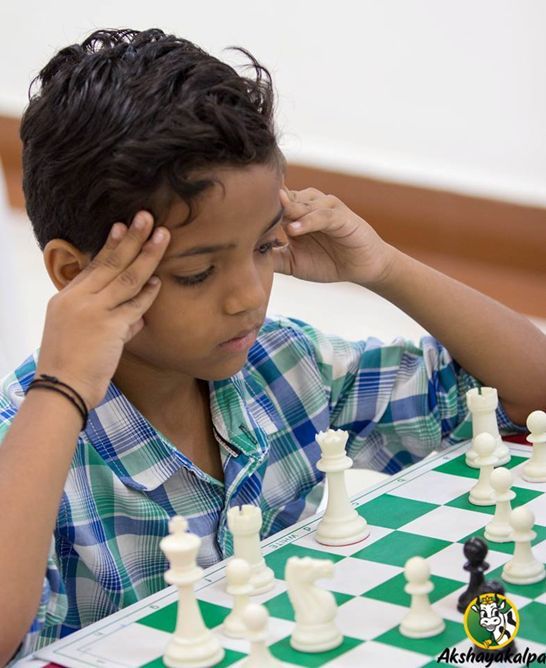 Apoorv Kamble scored 4 points. You can know more about this talent from the video published on the ChessBase India YouTube Channel during Commonwealth 2018. | Photo: Sandeep Kotian 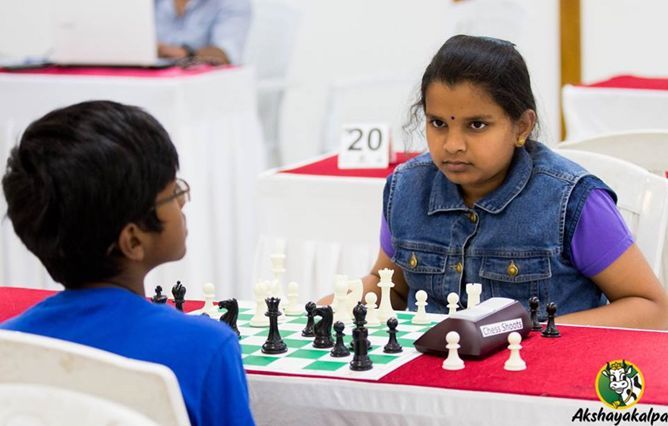 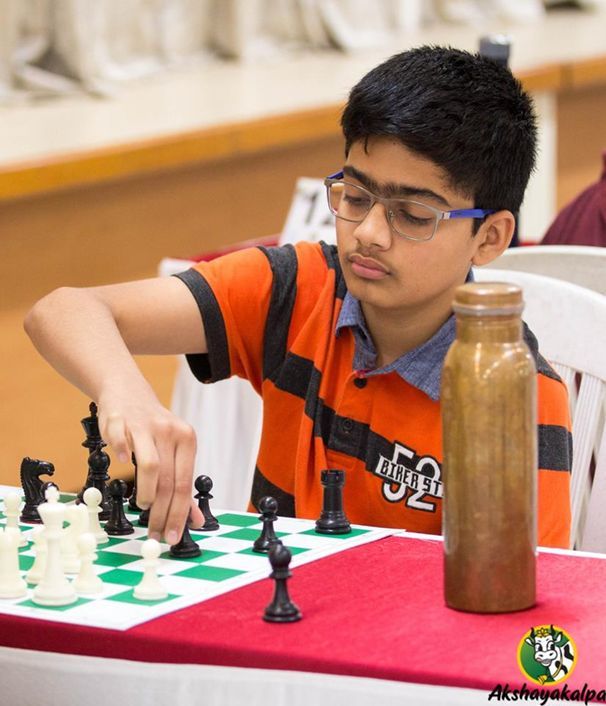 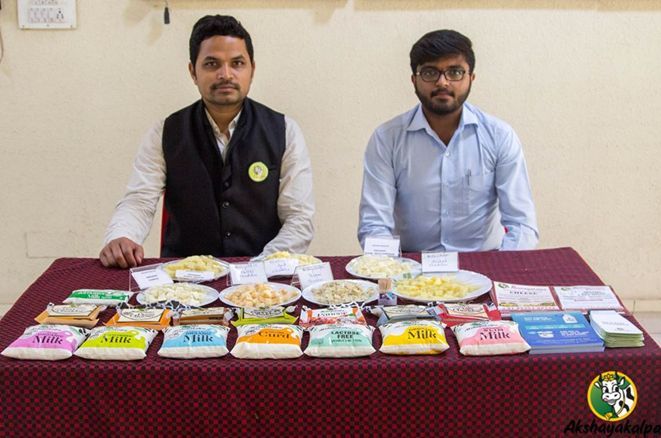 With many ensuing upsets and high-pressure games,  Akshayakalpa Organic Diary provided a cool relief in form of lip-smacking organic milk, cheese, curd and butter milk to all the players and parents | Photo: Sandeep Kotian 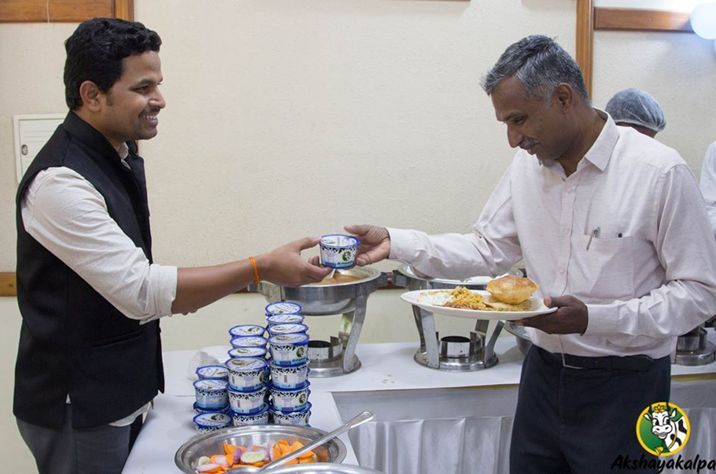 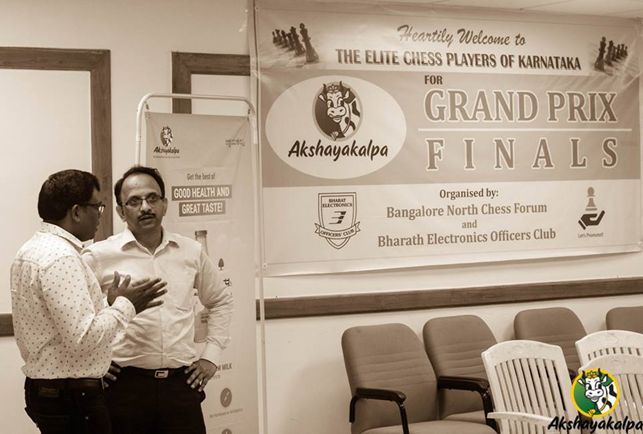 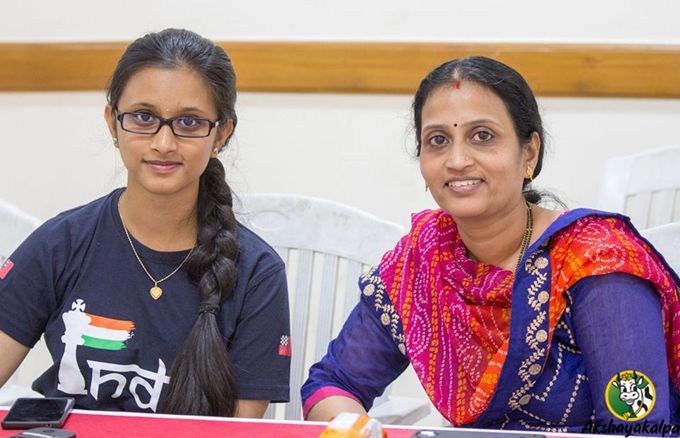 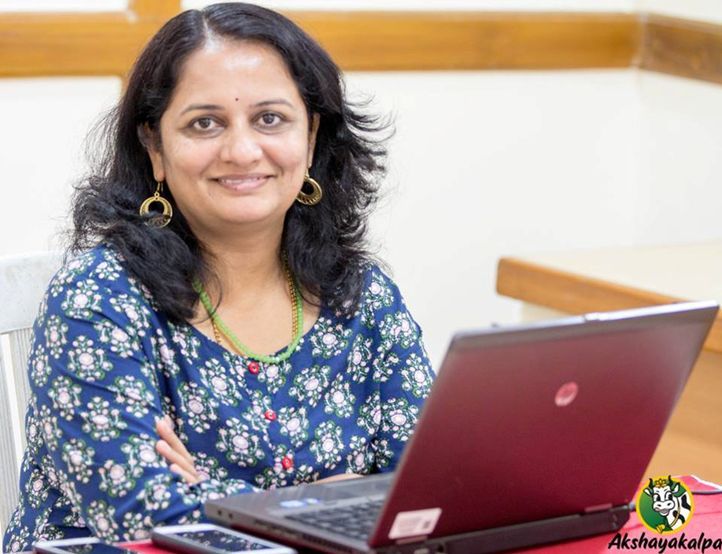 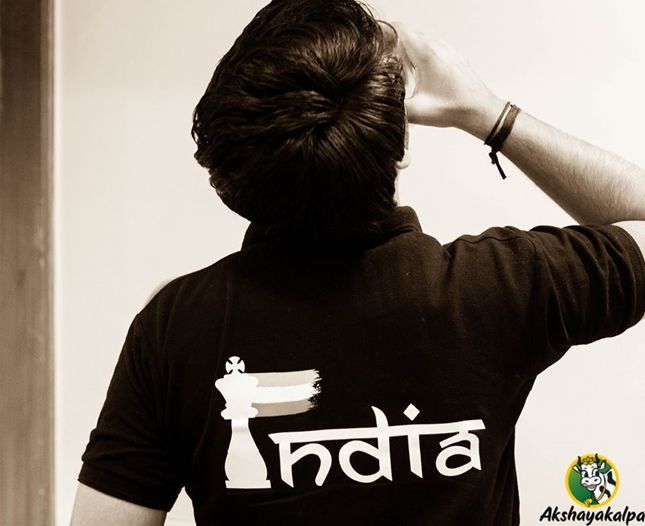 The sponsor of the event, Akshayakalpa Organic Dairy— ensures economic viability of the farming. Its aspiration is to help a farmer family earn a net income of Rs 1 lakh a month. Read about the initiative here. 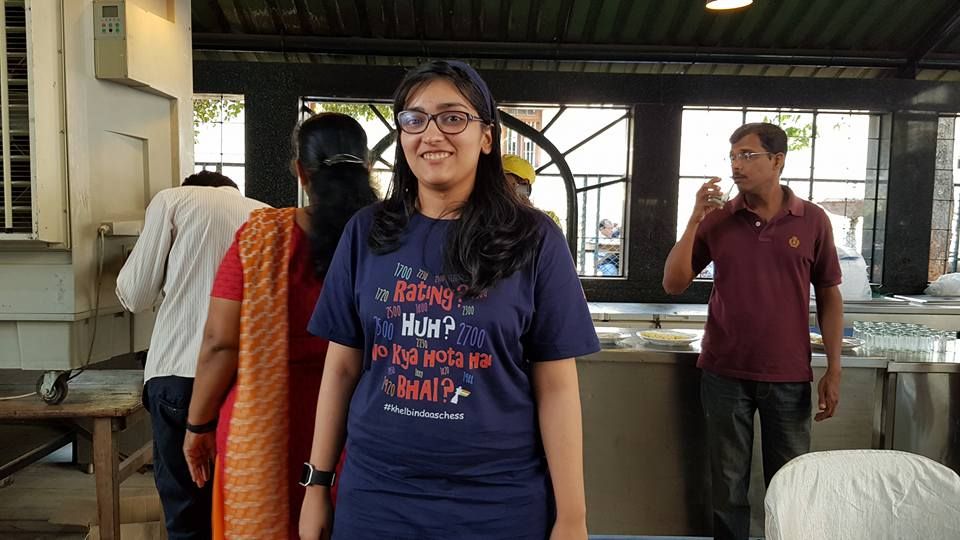 Hinduja Reddy is a 23-year-old chess entrepreneur who lives in Bengaluru. She is a former National Women's B bronze medalist, chess writer, and co-founder of ChessMine events. In her free time, she likes to follow the games of her friends GM Nihal Sarin and GM Srinath Narayanan.