Heartbreak for Indian contingent at the World Cadets 2019

The FIDE World Cadet Chess Championships 2019 came to a heartbreaking conclusion for the Indian contingent. Vivaan Vijay Saraogi, who emerged as one of the leaders in the under-8 open, failed to deliver in the final round and with that the country's hopes for a medal were dashed. In the under-10 section the encounter between Yash Bharadia and Ilamparthy A R ended in a draw which meant that both missed out on podium finish narrowly. In the same category Mayank Chakraborty registered a consoling victory, thus climbing up to a satisfactory seventh place on the rank-list. No other Indians could manage a top ten finish in the remaining categories. All in all, quite a forgettable event for Indian chess.

The Indian contingent with 31 of its participants had one of the largest representations in this years World Cadet Championships. Some of these players were seeded in the top five in their respective categories to begin with and therefore were expected to perform well. But unfortunately no one could rise to the occasion and bag even a single medal. Well, that's the nature of sports, sometimes you win and sometimes you just learn and move on! The best results in the event were secured by Russia, USA, and China followed by Kazakhstan, Mongolia, and Vietnam who too performed surprisingly well. The medal statistics after eleven rounds is given below: 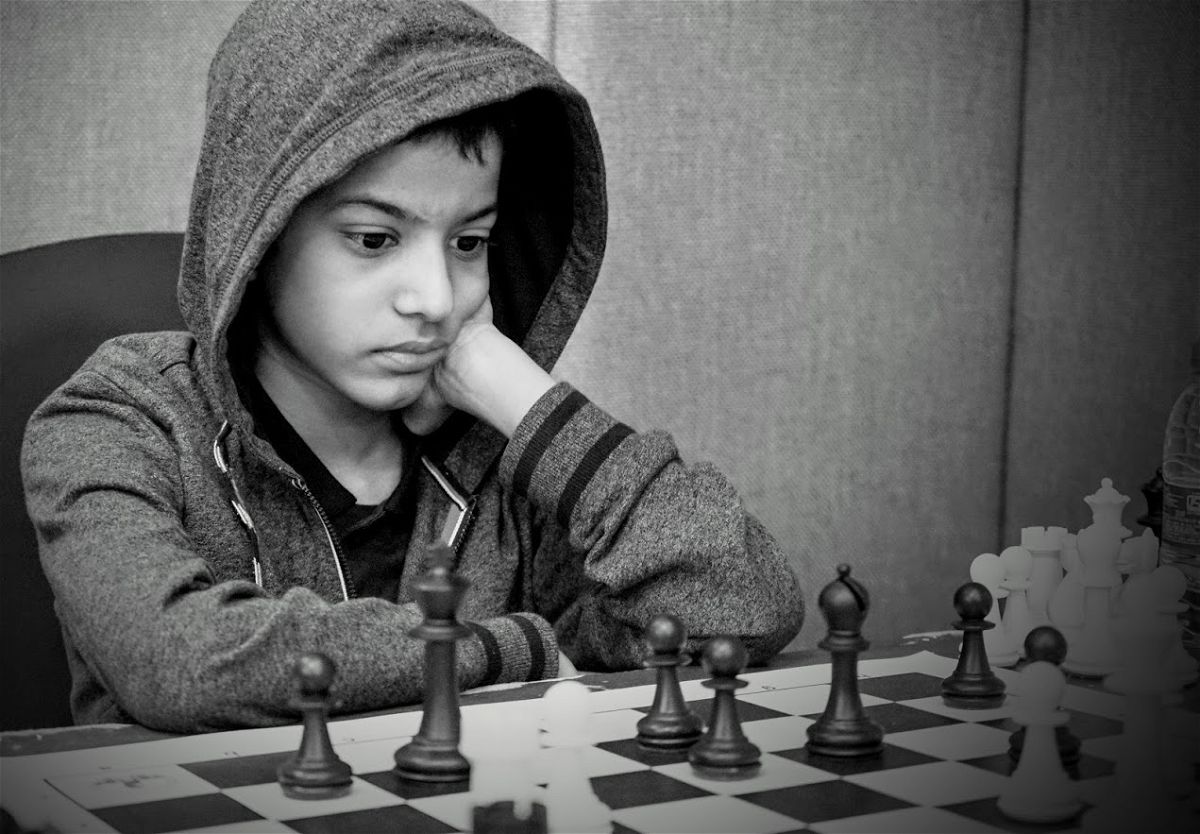 Vivaan finished fifth in the under-8 open with a score of 8.0/11 and came the closest to a podium finish. 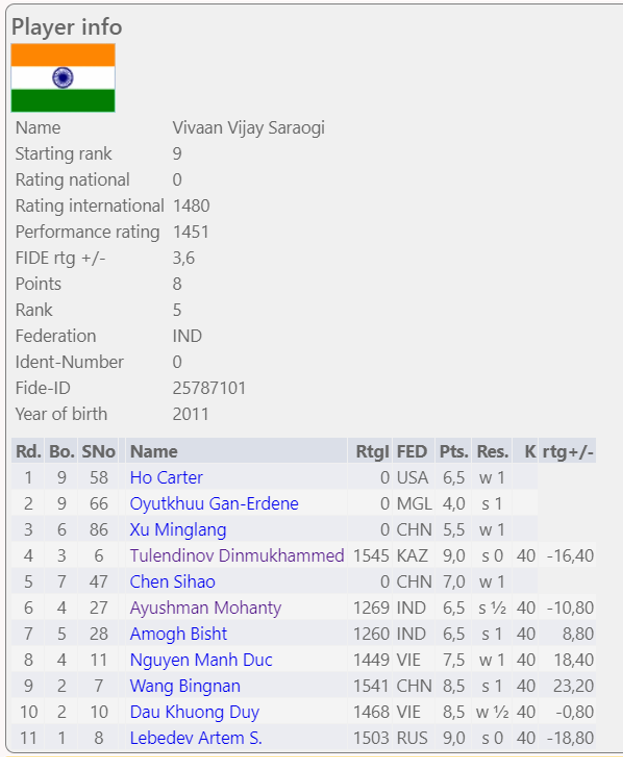 The only two loss in the event was handed to him by Lebedev Artem S and Tulendinov D, the leaders of the event.

Going into the final round, India's best hope for a medal rested in the hands Vivaan Vijay Saraogi. Vivaan emerged as one of the leaders in the under-8 open after the penultimate round ten of the event. In round eleven he was paired up with the black pieces against another leader, namely Lebedev Artem S. of Russia. The game started off with 1.e4 g6 and the Indian youngster soon entered into an unfavourable position out of the opening. 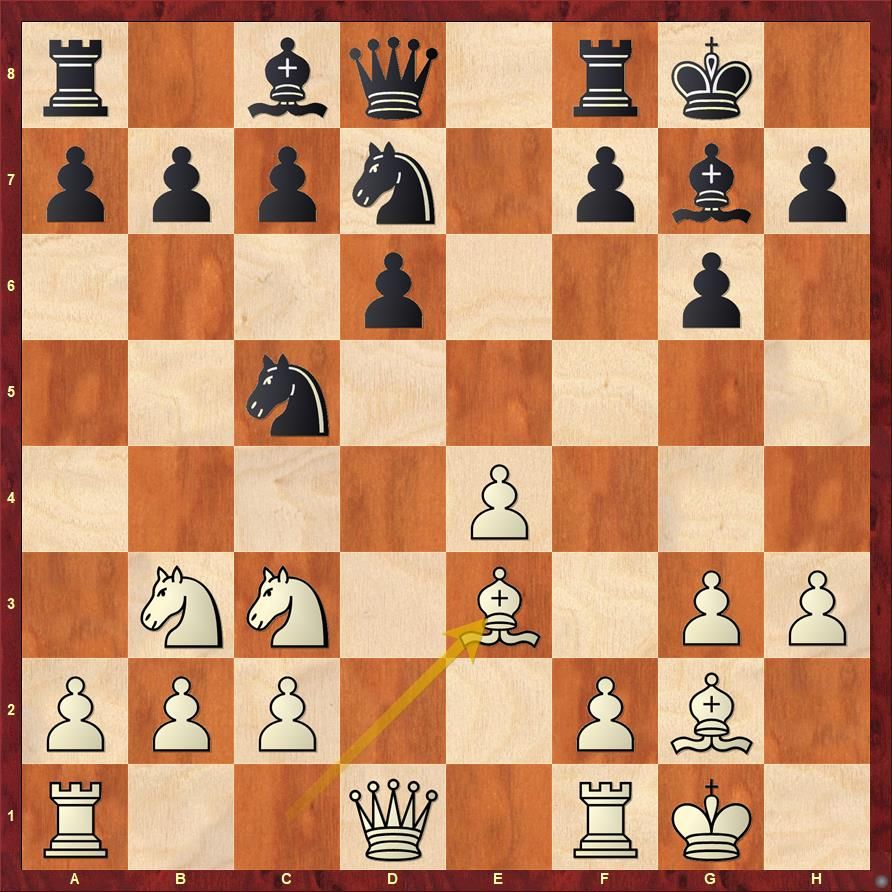 Position after 11.Be3: Black played the awkward 11...Ne6 which allowed White to expand on the kingside with 12.f4. Simplifying instead with 11...Bxc3 12.bxc3 Re8 would have kept even chances. 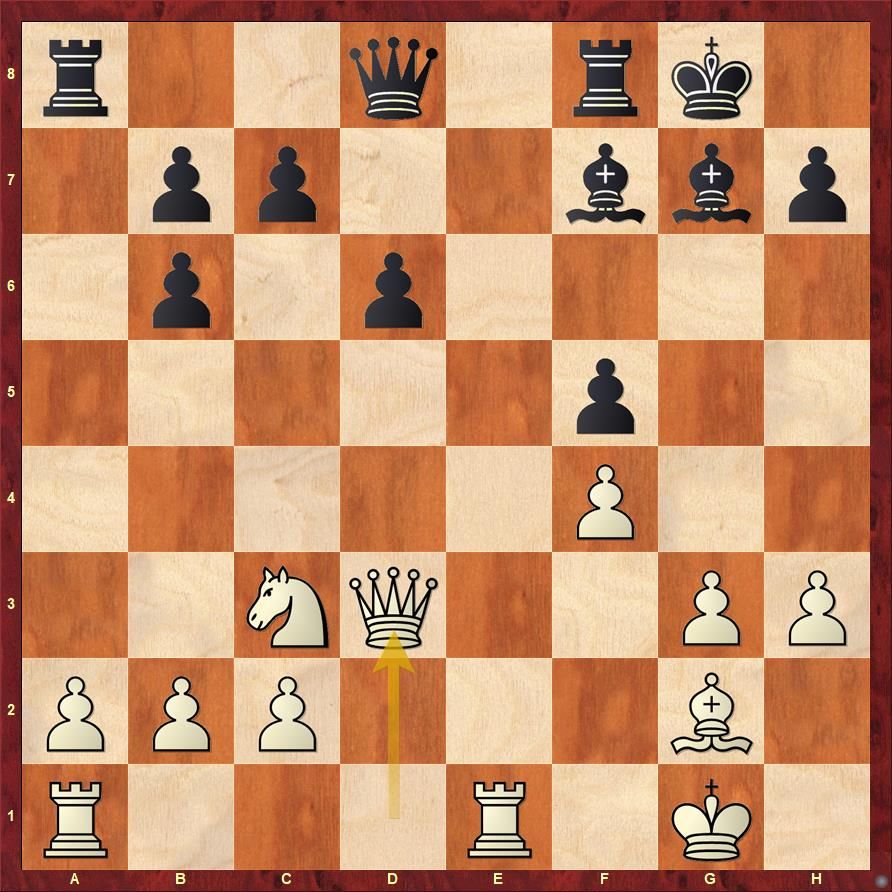 18.Qd3 wasn't the greatest of moves, Black had a chance here to equalize and even get an edge. But Vivaan went for 18...Qc8 which allowed White to capitalize with 19.Nd5

A wiser plan would have been to just give up the f5 pawn and consolidate with 18...c6. The point is after something like 19.Qxf5 d5 20.Kh2 Qd6 Black has managed to shut off White's g2 bishop completely. 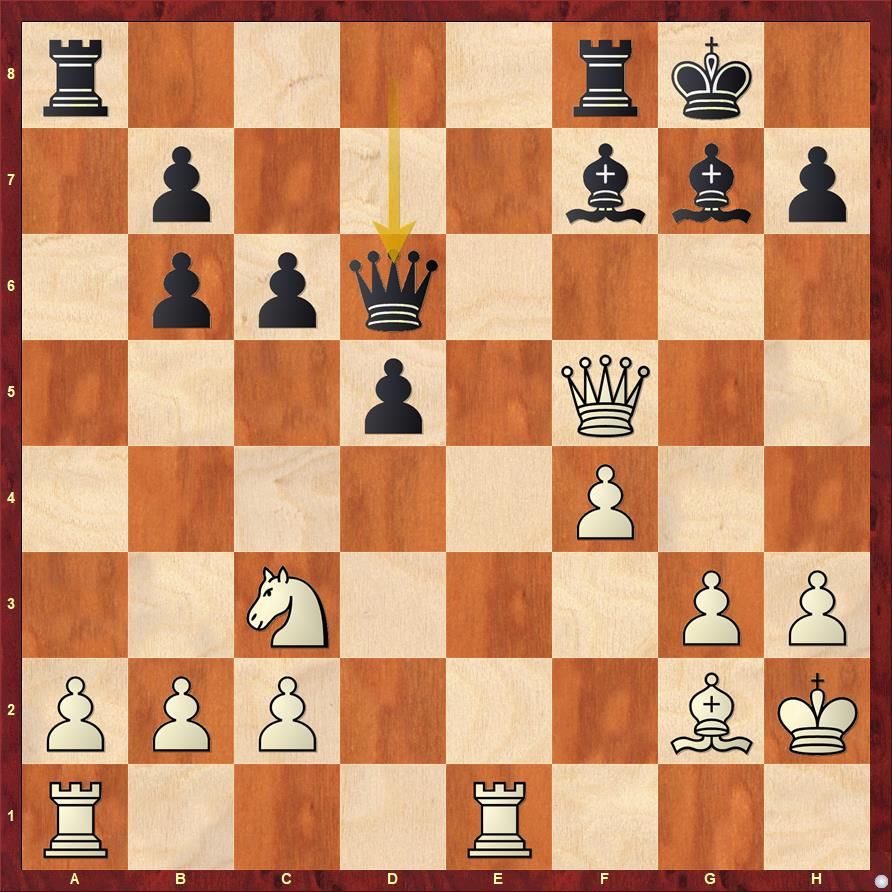 In this position White is up a pawn but has no play. Black is solid and has an active pair of bishops which can potentially turn dangerous if the position opens up more.

But 18...Qc8 played in the game allowed White to keep the initiative going. The game followed 19.Nd5 Bxd5 20.Bxd5+ and Black had to part with his bishop pair, while White managed to bring his light-squared bishop to a better square. 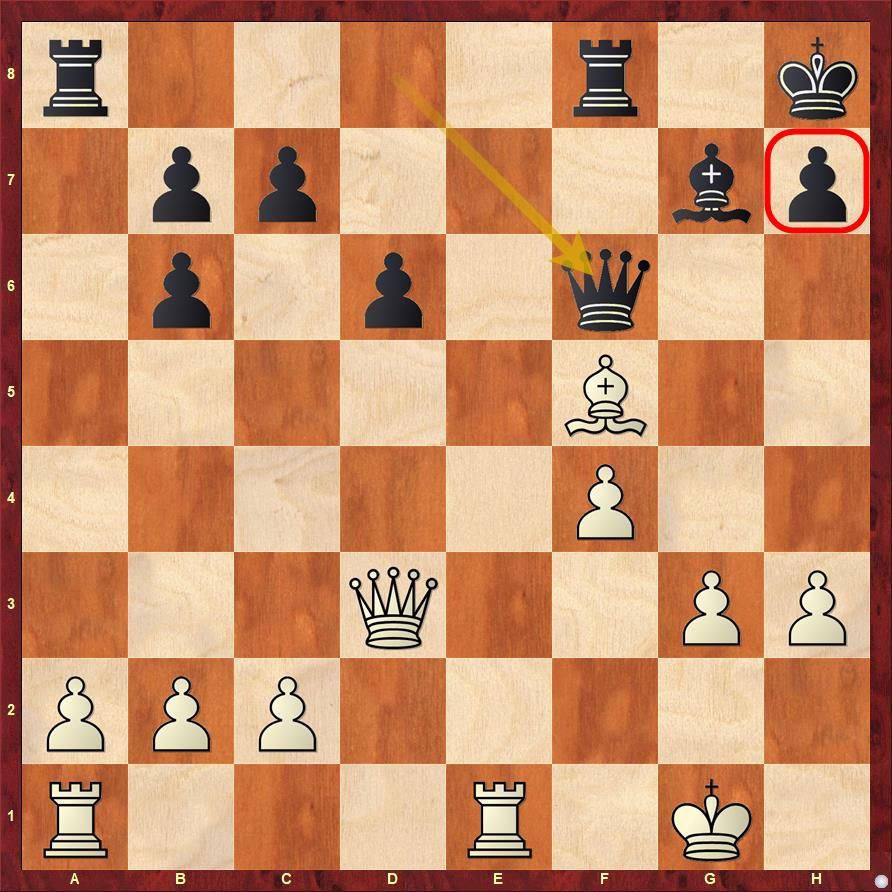 Here 22...Qf6?! didn't alleviate Black's troubles. Instead 22...Bxb2 23.Rab1 Ra3! would have been a nice way to generate counterplay and bring balance back in the position. Vivaan missed one more opportunity. 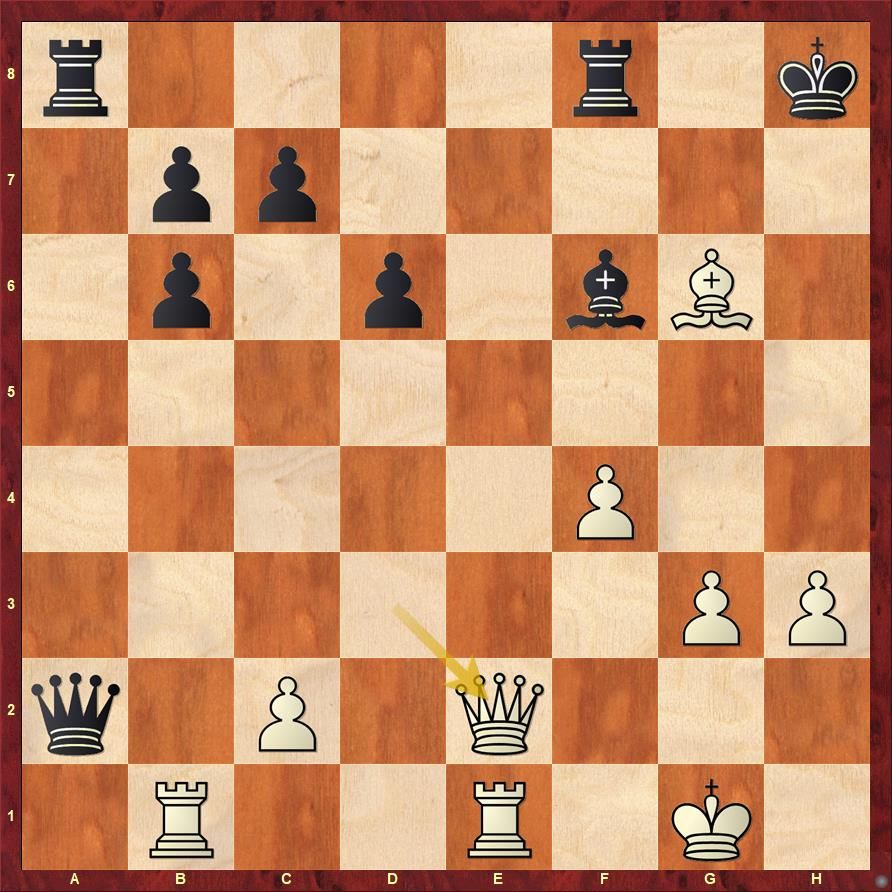 26.Qe2 was the final nail on Black's coffin. Qh5+ followed by Qh7# is a threat already and Black's most important piece, the queen, is too far away to come to aid. White was soon able to bring his rooks into the foray and on move 37 the game ended with a checkmate.

In the under-10 section medal hopes dwindled when Yash Bharadia and Ilamparthy A R were paired up against each other in the final round. The encounter between these two talented youngsters ended in a draw after 48 moves in the following position.

Yash Bharadia - Ilamparthy A R, Round 11 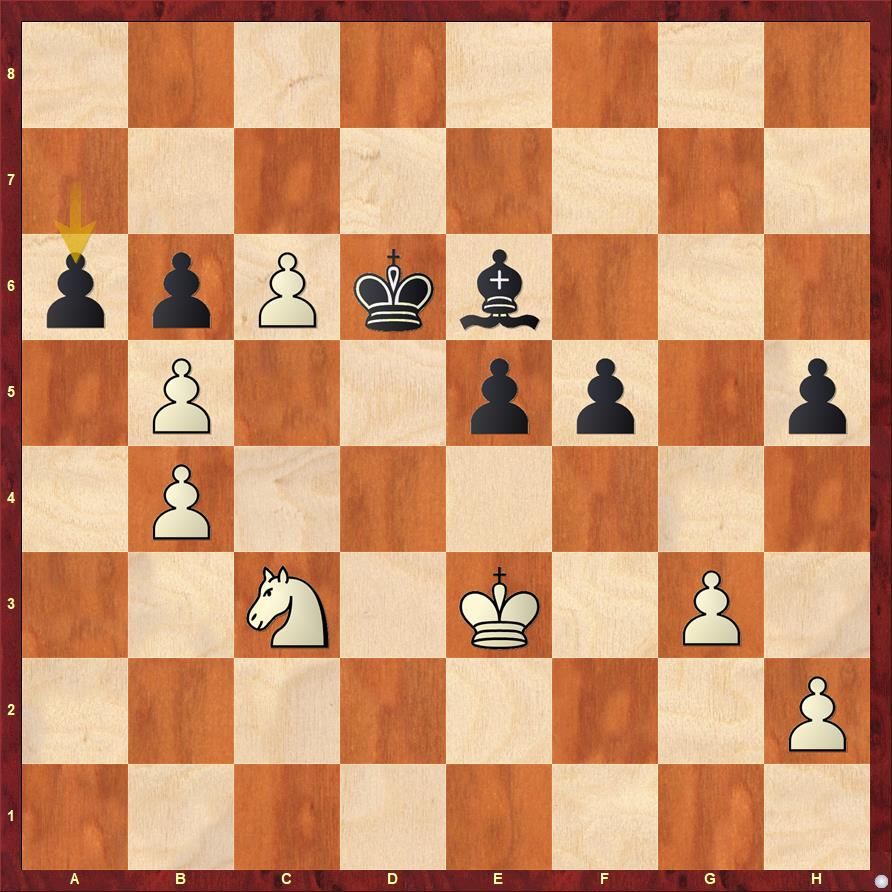 White seems to have slight edge with the queenside pawn majority. Do you think Yash should have pushed for a win? 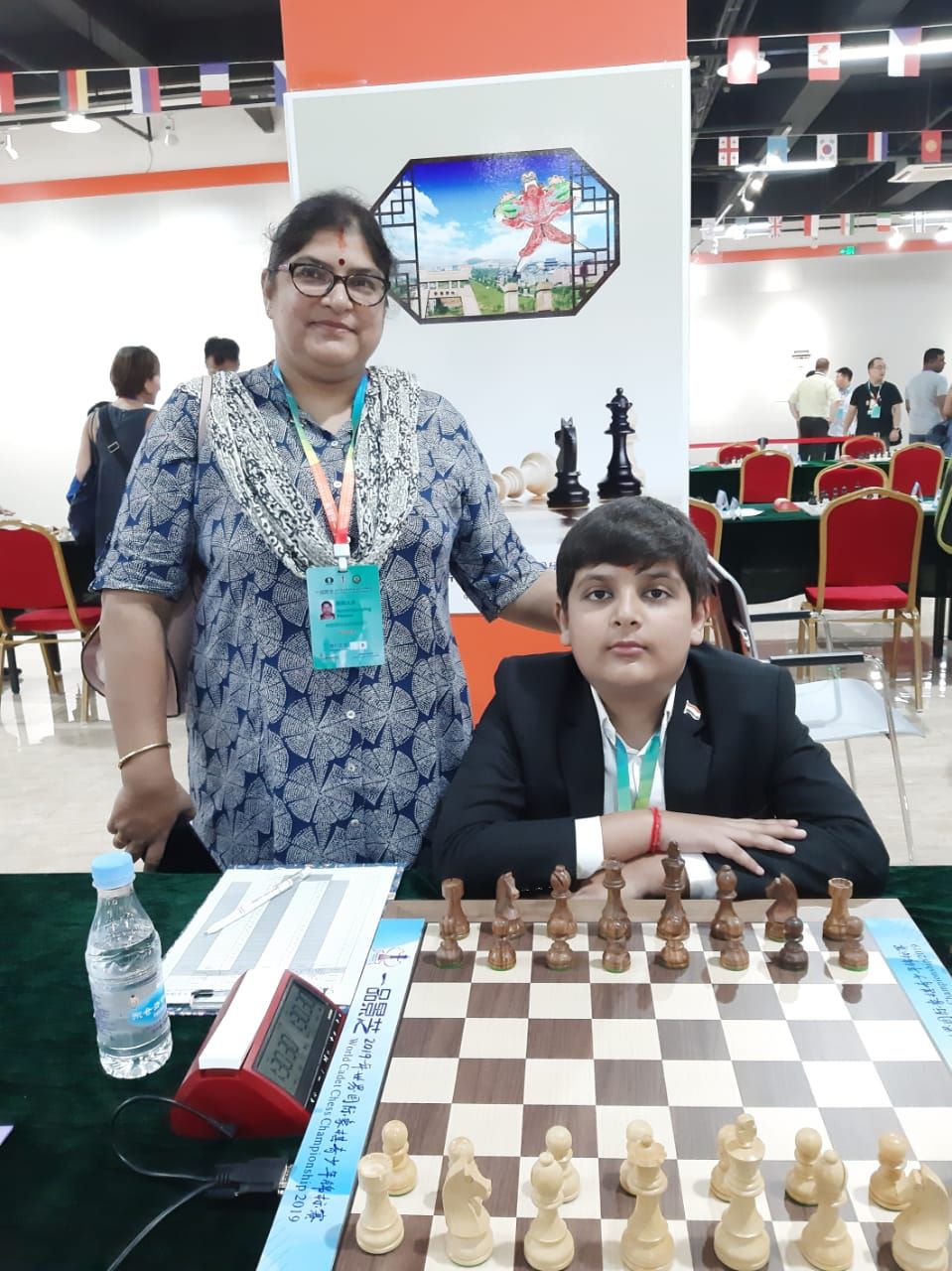 Mayank Chakraborty registered two victories in the last two rounds of the event to finish seventh just behind Ilamparthy and Yash with a score of 8.0/11 | Photo: Shantharam Kadanthaly Venkatraman 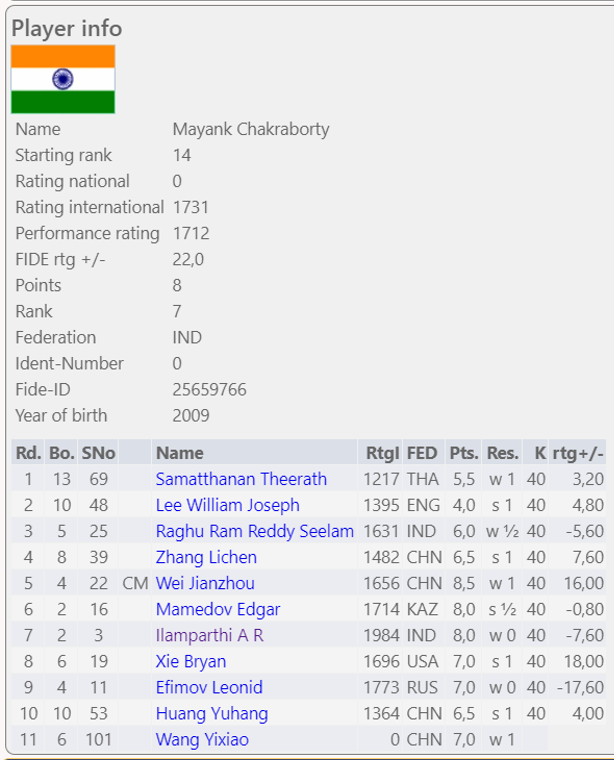 Mayank suffered defeats in rounds seventh and ninth but recovered well in the end.

Mayank was up against Wang Yixiao of China with the white pieces in final round of the event. The game opened with a Ruy Lopez and was played on well trodden theory until when on move 17 Black blundered. 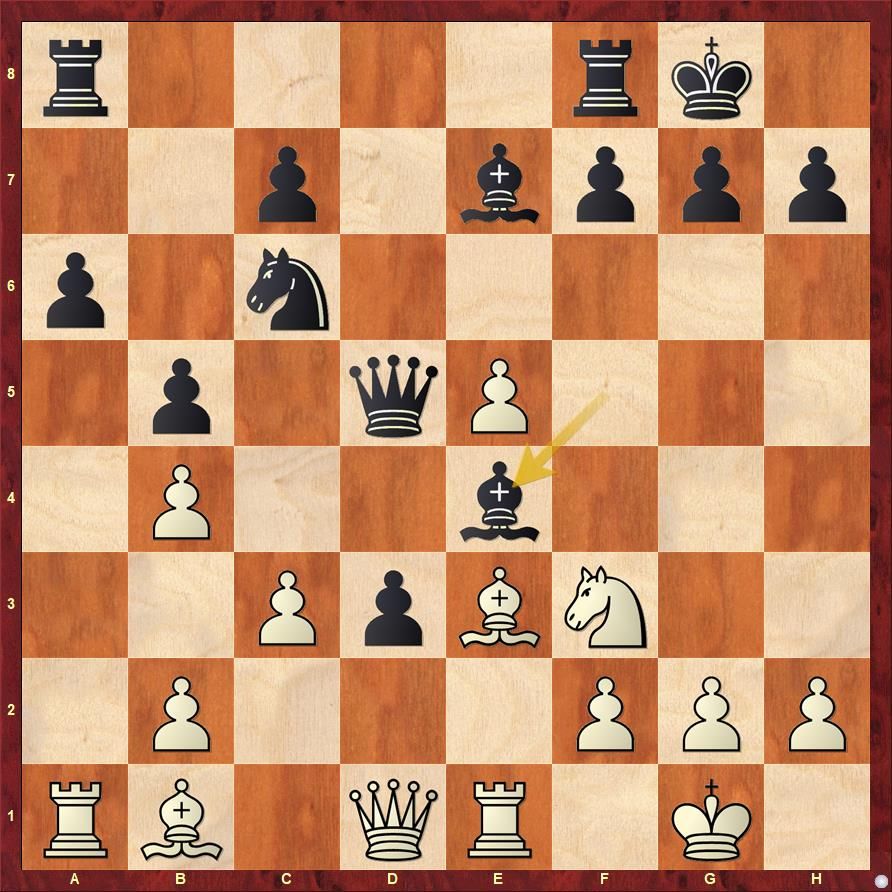 17...Be4 was careless. Can you find how White can take advantage of this?

The correct move, and which indeed was played in the game, is 18.Ba2. With best play from this position 18...Qd8 19.Nd4 Nxd4 20.Bxd4 White seizes a tangible initiative. 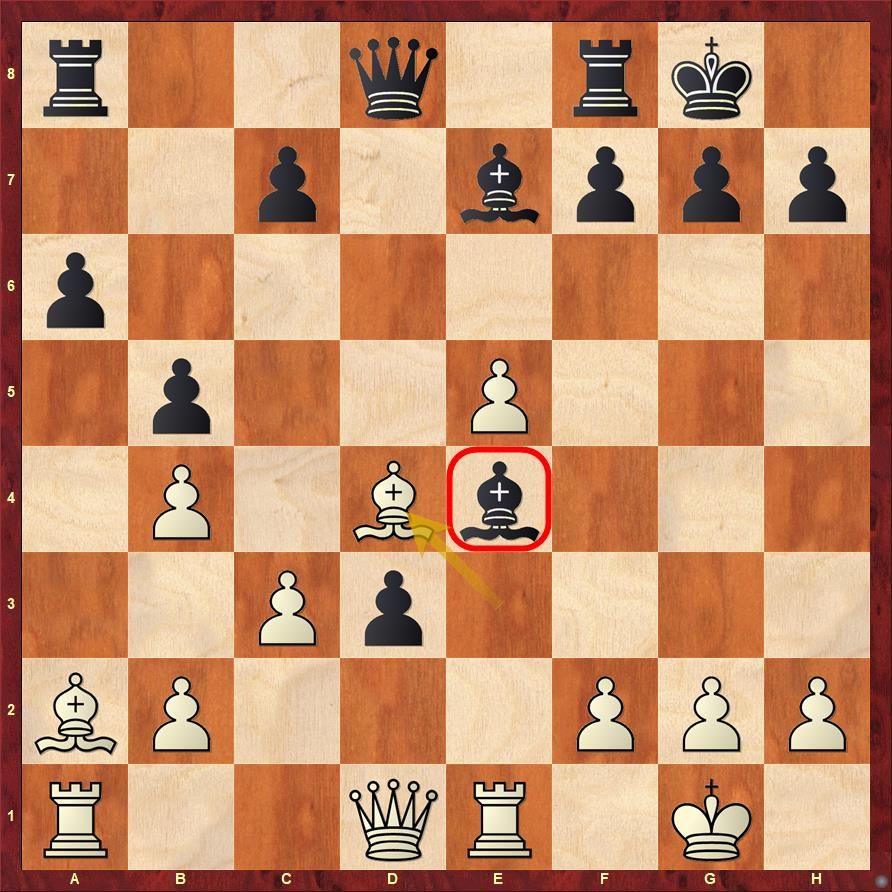 White's bishops are nicely placed on a2-g8 and a1-h8 diagonals and it now seems Black's d3 pawn has come too far down the board. 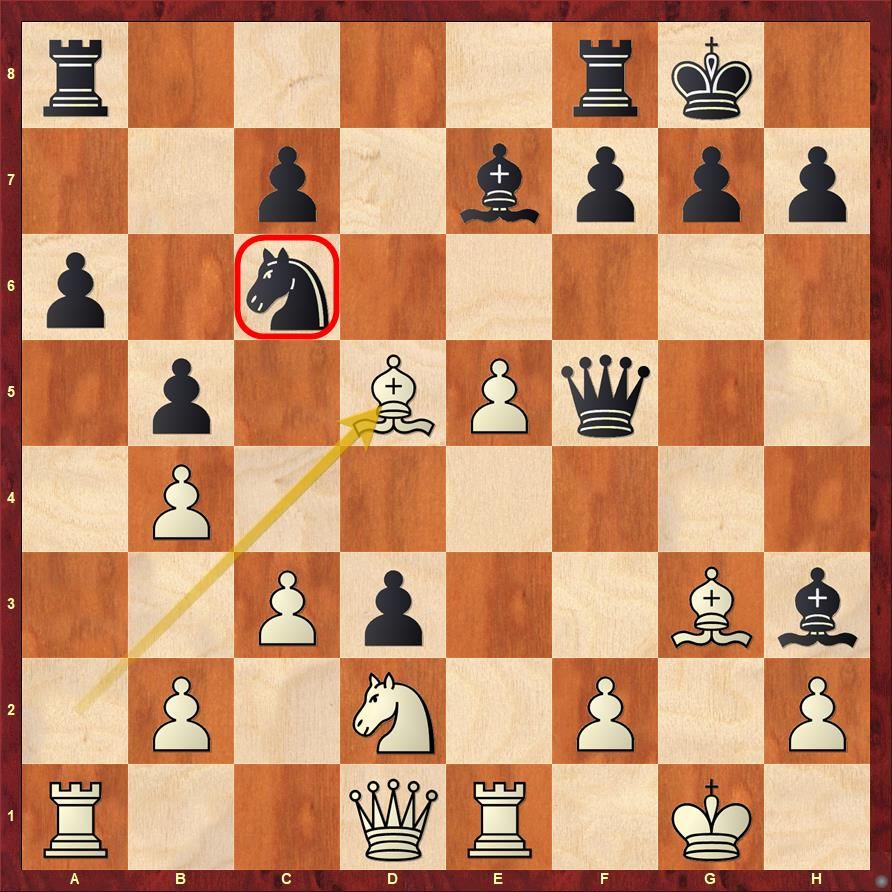 There's no good way to defend the c6 knight. In the game 22...Qg6 was played and White won the knight with the simple 23.e6. This was game over for Black! 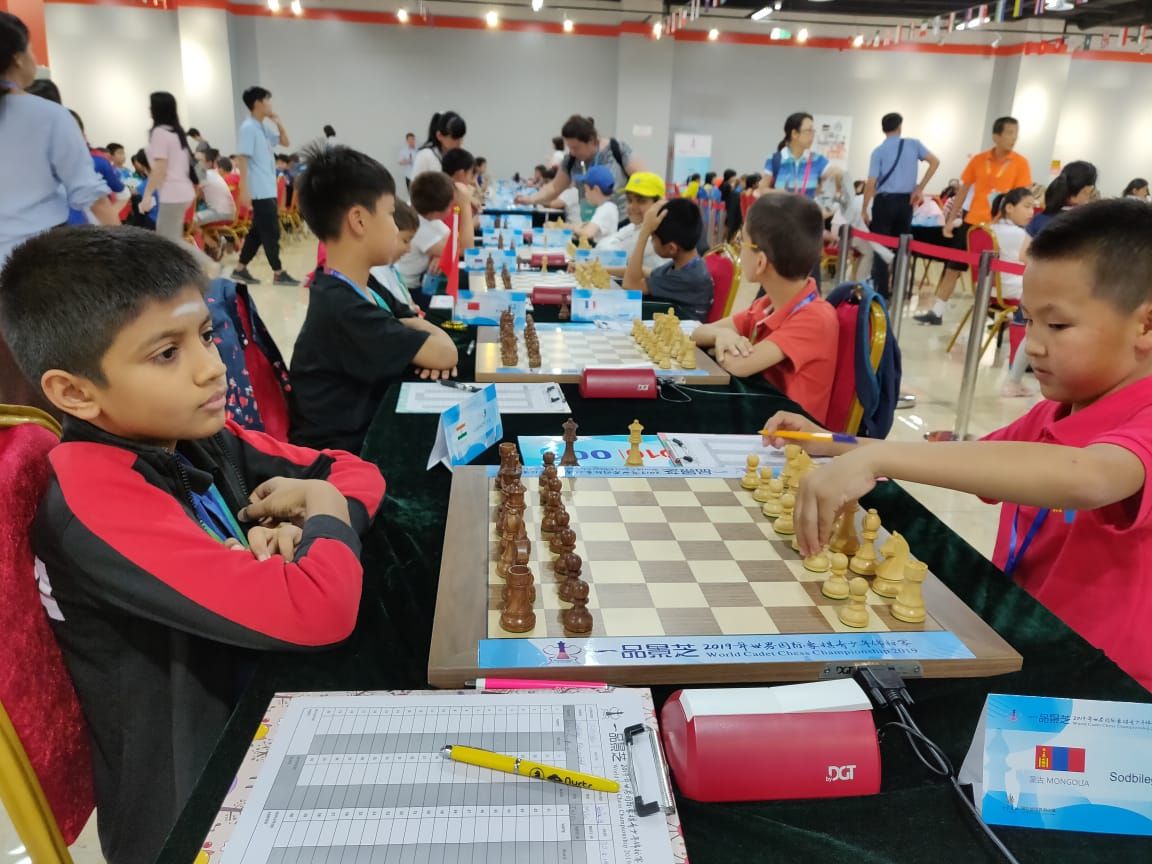 Ilamparthy A R (left) finished fourth in the under-10 open event and missed podium finish by a whisker | Photo: Shantharam Kadanthaly Venkatraman 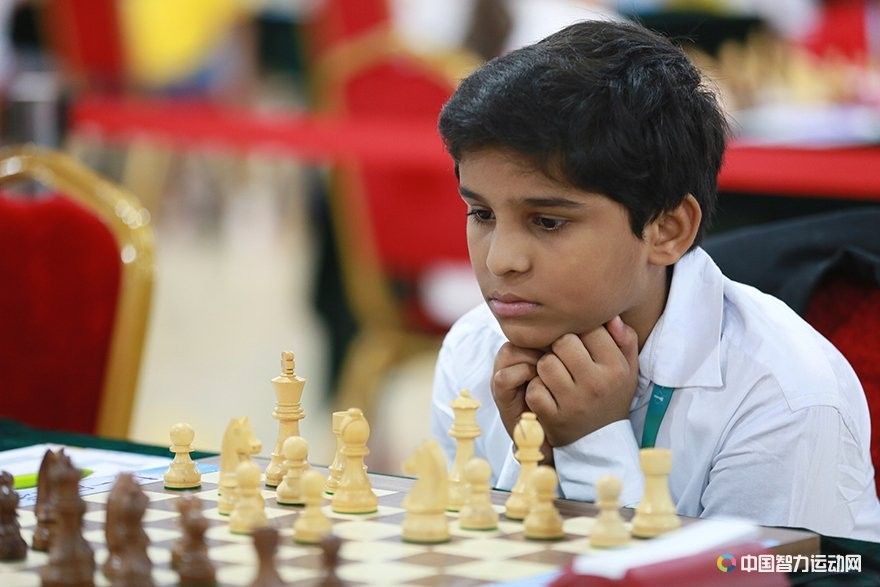 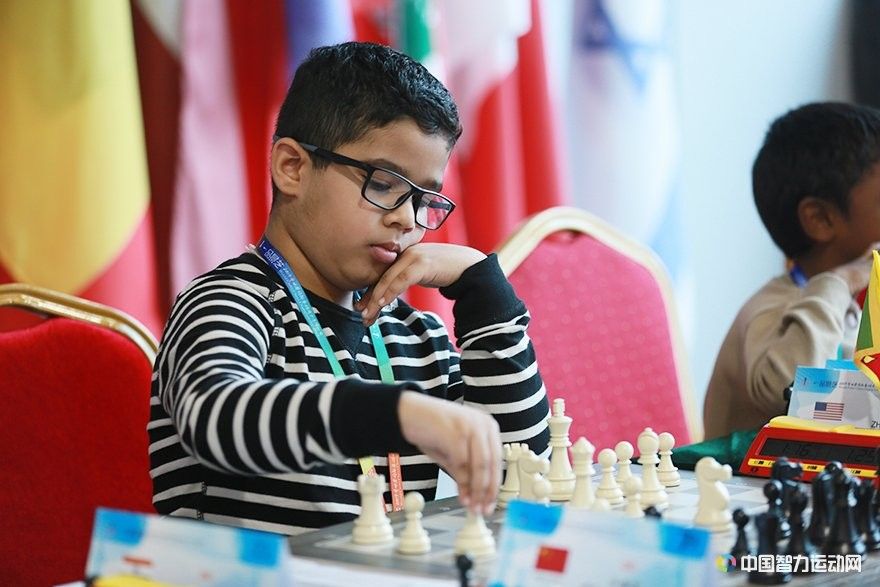 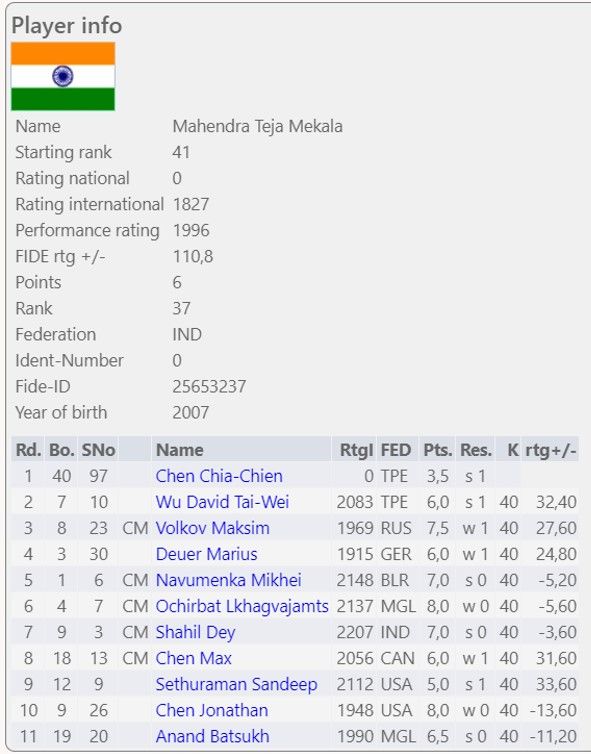 Mahendra played with a performance rating of 1996 and gained a whopping 110.8 Elo points. 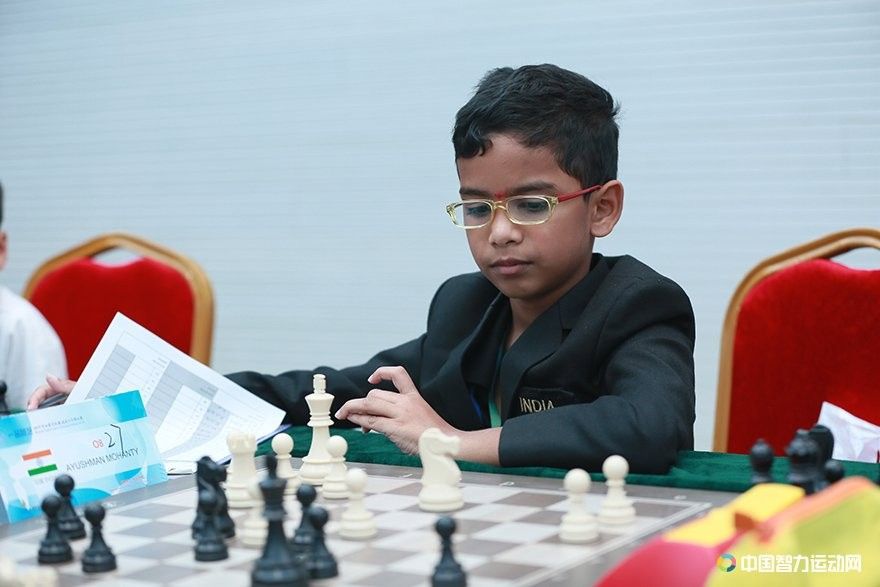 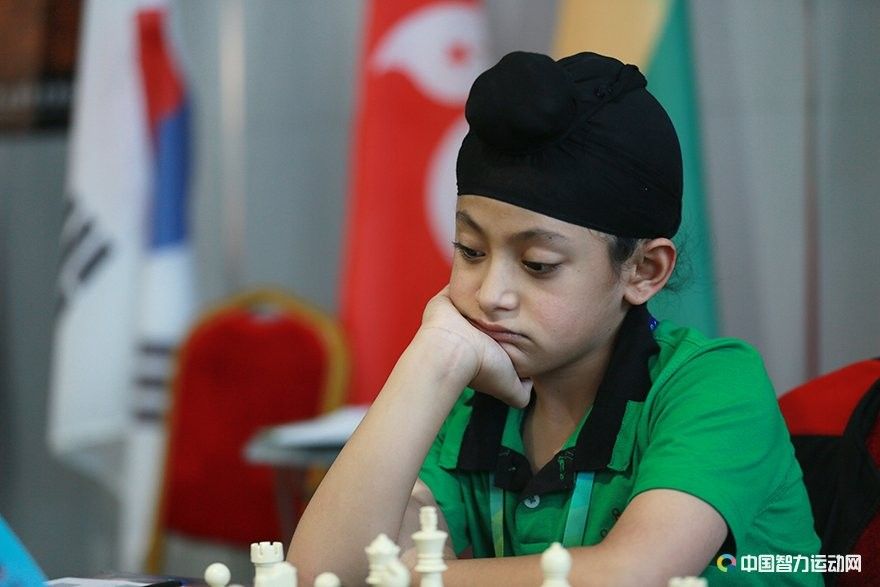 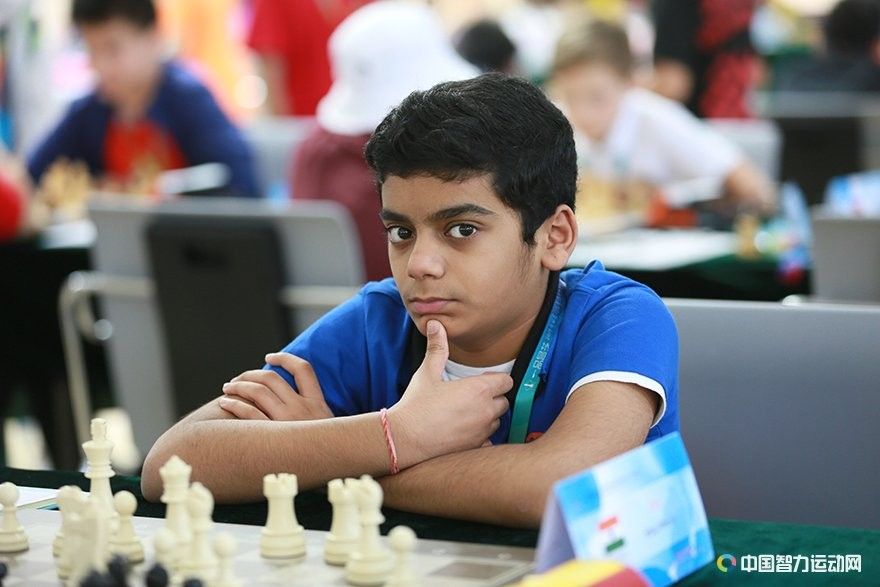 Atharva Bang of under-12 did poorly in the first half of the event but recovered in the second half to finish with a decent 5.5/11 | Photo: imsa.cn 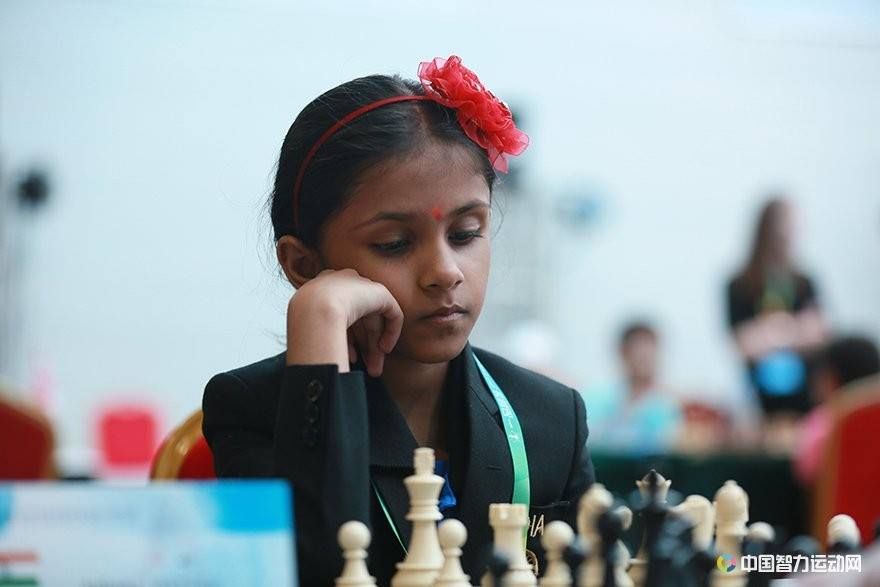 Aishani Pathak was the fourth seed in under-8 girls but finished 31st with a score of 6.0/11 | Photo: imsa.cn 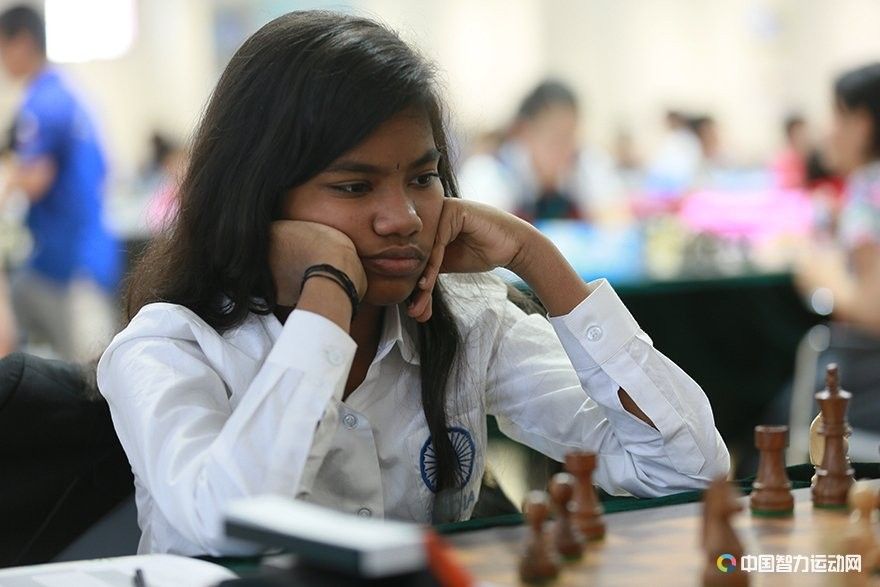 Savith Shri B's performance in the under-12 girls was perhaps the most disappointing. She was the top seed yet had to finish twelfth with a sombre 7.0/11 | Photo: imsa.cn

An overview of all Indian performances after eleven rounds