The FIDE World Cadet Chess Championships (under-8, under-10, and under-12) have commenced in Weifang, China. Often dubbed as the kite capital of the world, Weifang is a prefecture-level city of the central Shandong province which is famous for its flamboyant kite festival celebrations that take place in the spring of every year. However, this beautiful chinese port city is in the spotlight these days for an entirely different reason as it is hosting the most important contest for budding chess talents from around the world. The Indian contingent, with thirty-one of its players, makes for one of the largest representations in this grand event. With promising youngsters like Savitha Shri B, Shahil Dey, Dev Shah, Ilamparthi A R, Yash Bharadiya, Vivaan Saraogi, Aishani Pathak, and Lakshana Subramanian competing in different categories, the country's hope for medals this time is soaring high.

The FIDE World Cadet Chess Championships 2019 started off on the 21st of August with a colourful opening ceremony. Guests who graced the occasion with their presence included the best female player of all time Grandmaster Judit Polgar who is also currently the Vice President of FIDE, Director Zhu Goping, Vice Director Wang Yankui, and Mrs Li Ping the Deputy Mayor of Weifang city. This eleven-round swiss event being organised by the Chinese Chess Association gives each player 90 minutes for the first 40 moves then 30 minutes for the rest of the game with 30 seconds increment per move from move one. 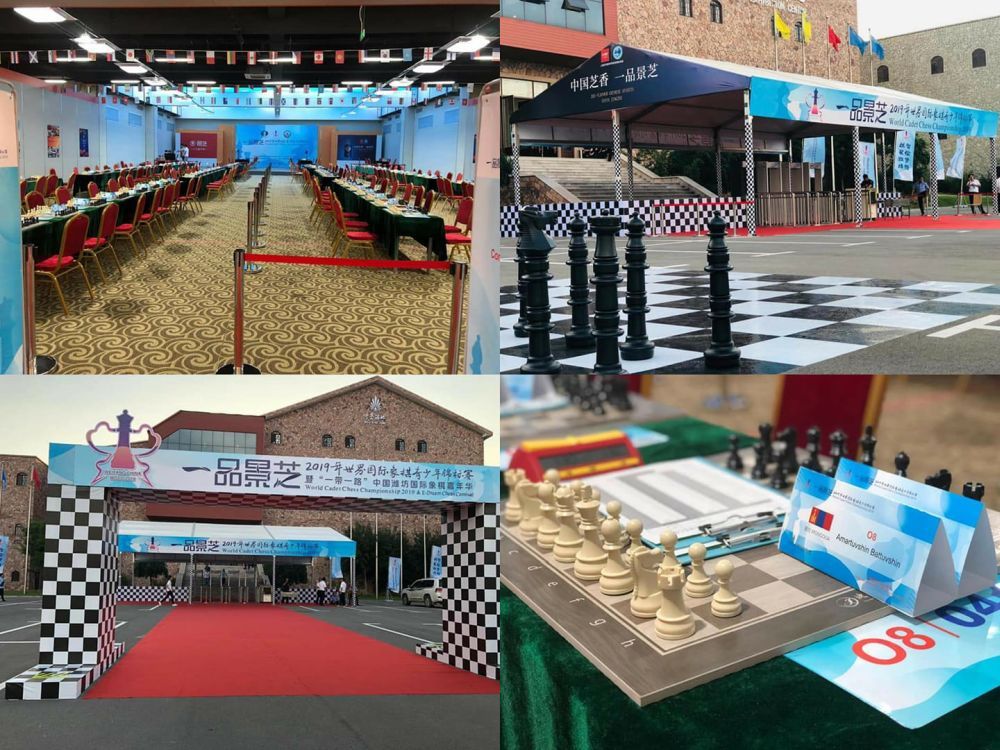 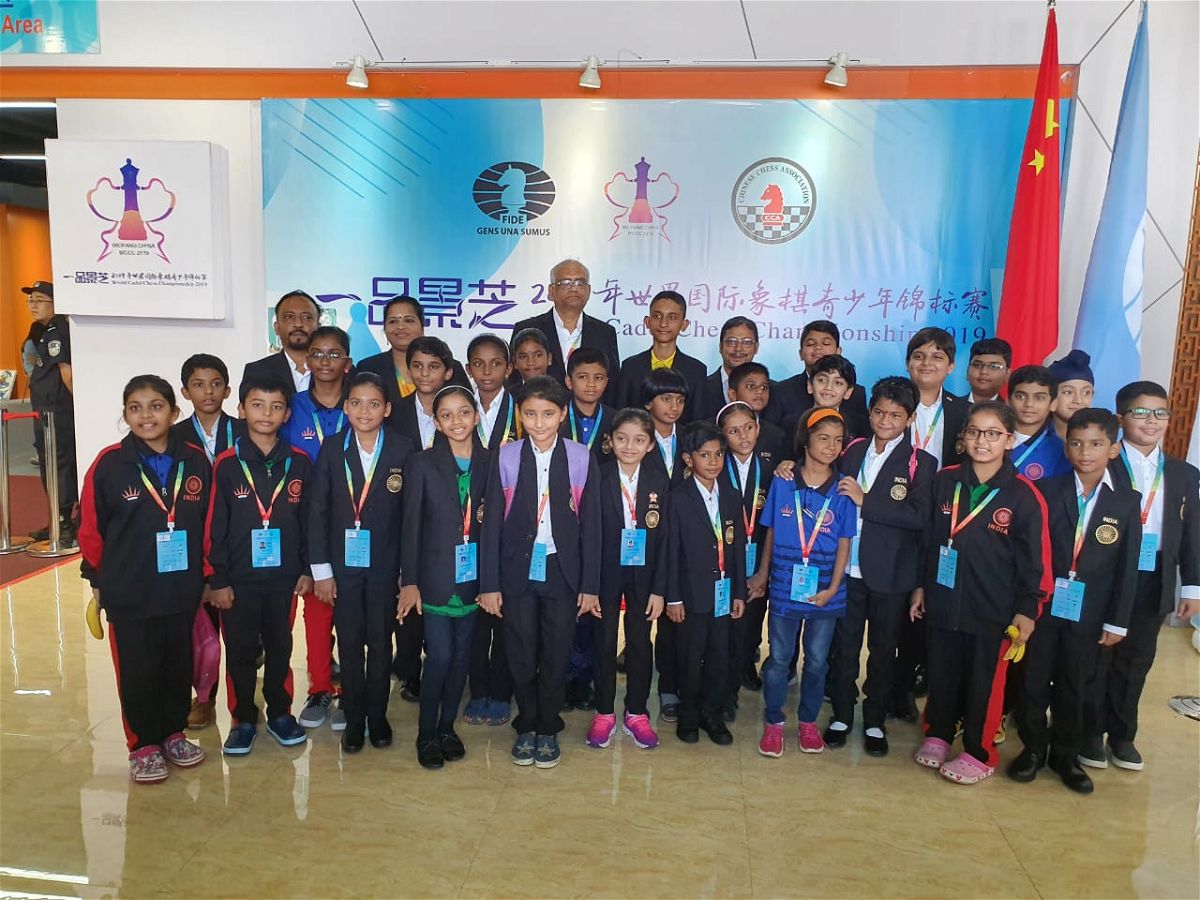 World Cadets Chess Championship has attracted 577 young participants this year from all over the world, of which India's medal hope is in the hands of the smart 31 participants! | Photo: Shantharam Kadanthaly Venkatraman 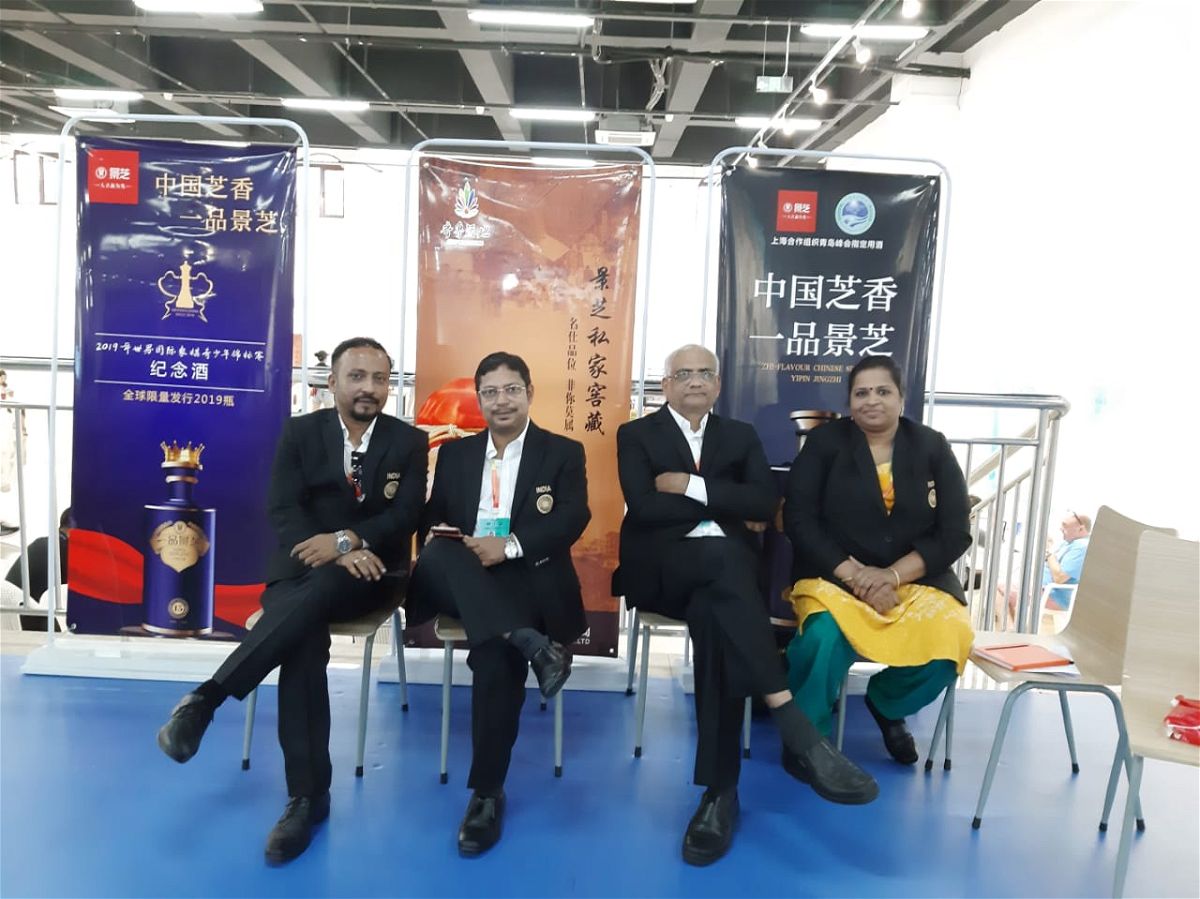 Round 1: Savitha Shri B. survives a scare

Savitha Shri B, the top-seed of under-12 girls, survived a massive scare against Wang Shunshun in the very first round. She made a weakening pawn move on the kingside and ended up in a totally lost position which she then had to defend for a staggering ninety-nine moves to salvage a draw.

Savitha Shri B - Wang Shunshun, Round 1 The position was roughly equal after 25...Ng6, although white's king looked a tad open owing to the overextended pawns on f3, g3, and h4. Bxh4 was already a threat at this point that White had to take into consideration. 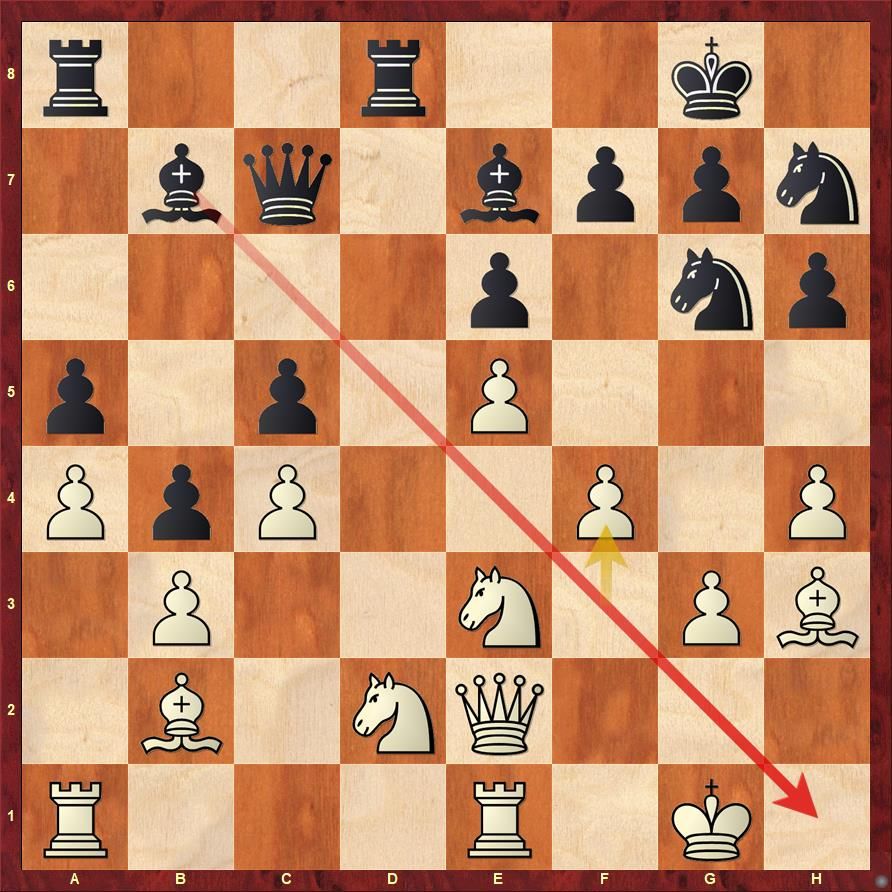 With 26.f4? the evaluation tilted completely in Black's favour. The bishop on b7 was now a monster and Bxh4 a decisive blow. Still Savitha somehow held on and ultimately, after a ninety-nine moves long struggle, managed to split the point!

The other Indians in under-12 girls namely Akshaya R and Tejaswi R, won their respective games. Overall, Indians had mixed results in the 1st round in all catagories. In under-12 open-3rd seeded Sahil Dey drew with Chen Zhi of China; while Dev Shah, Om Kadam, and Mahendra Teja won their games. Atharva Bang lost to Chen Kailin of China.

In under-8 girls, only Lakshana S, Meenakshi KA, and Anaisha PN could win their games; Ashiana P drew and the rest - Samaira Jain, Aadhya Jain and Deepu A - lost their games. By far the best result in round one came from under-8 open where four out of the total five players registered victory. The winners were Vivaan VS, Jaivardhan Raj, Ayushman M, Amogh Bisht. And it was only Ishaan S K who drew his game.

Round 2: Ilamparthi pulls off a deceiving queen sac! 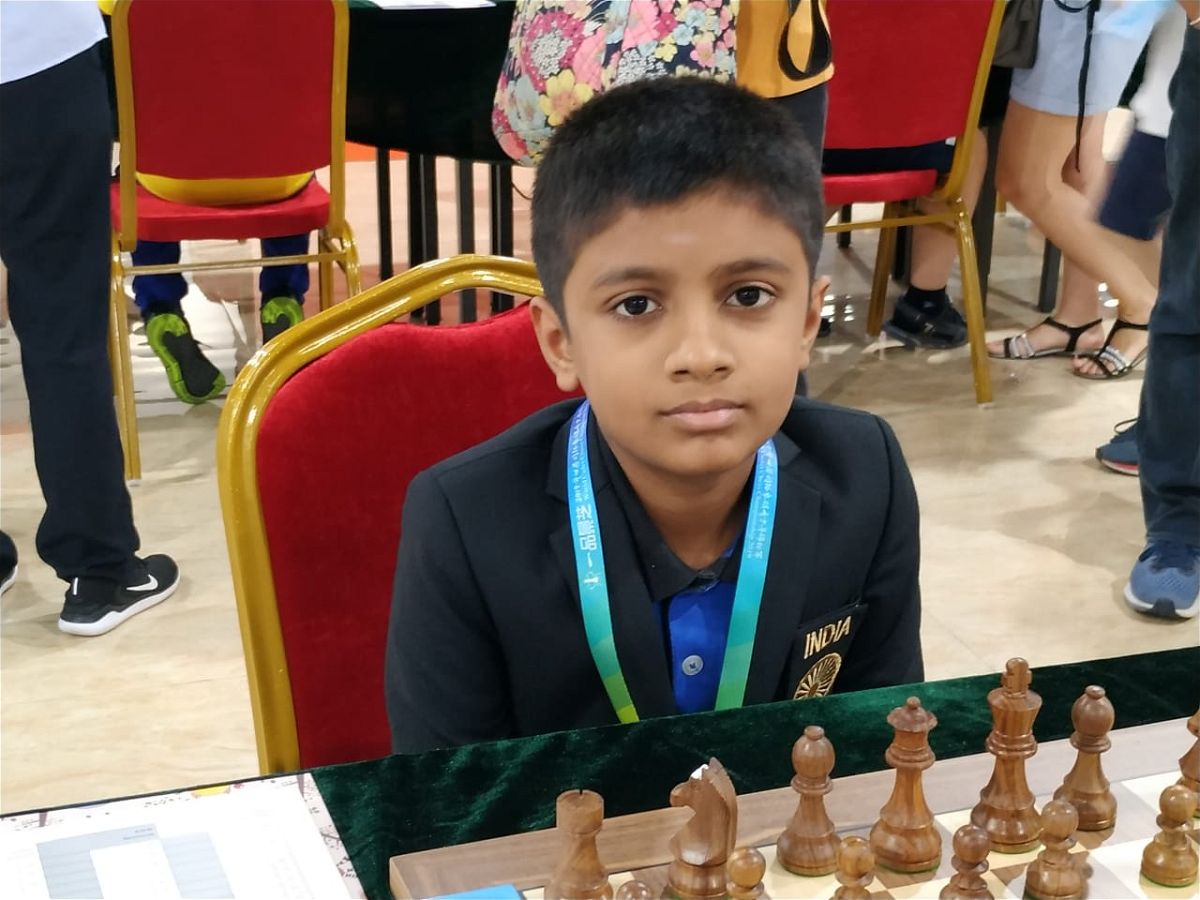 Ilamparthi A R pulled off a bold queen sacrifice in the second round against Ekansh Mehrotra of USA. Whether or not sound, it worked pretty well in the young Indian's favour! | Photo: Shantharam Kadanthaly Venkatraman

Ekansh Mehrotra - Ilamparthi A R, Round 2 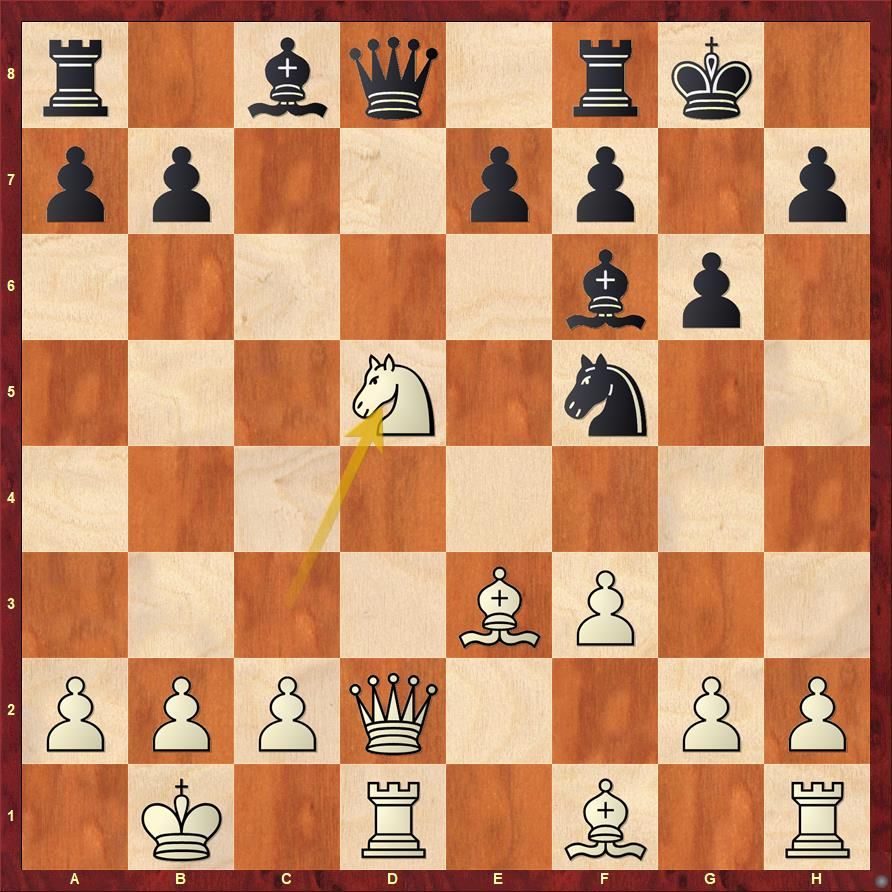 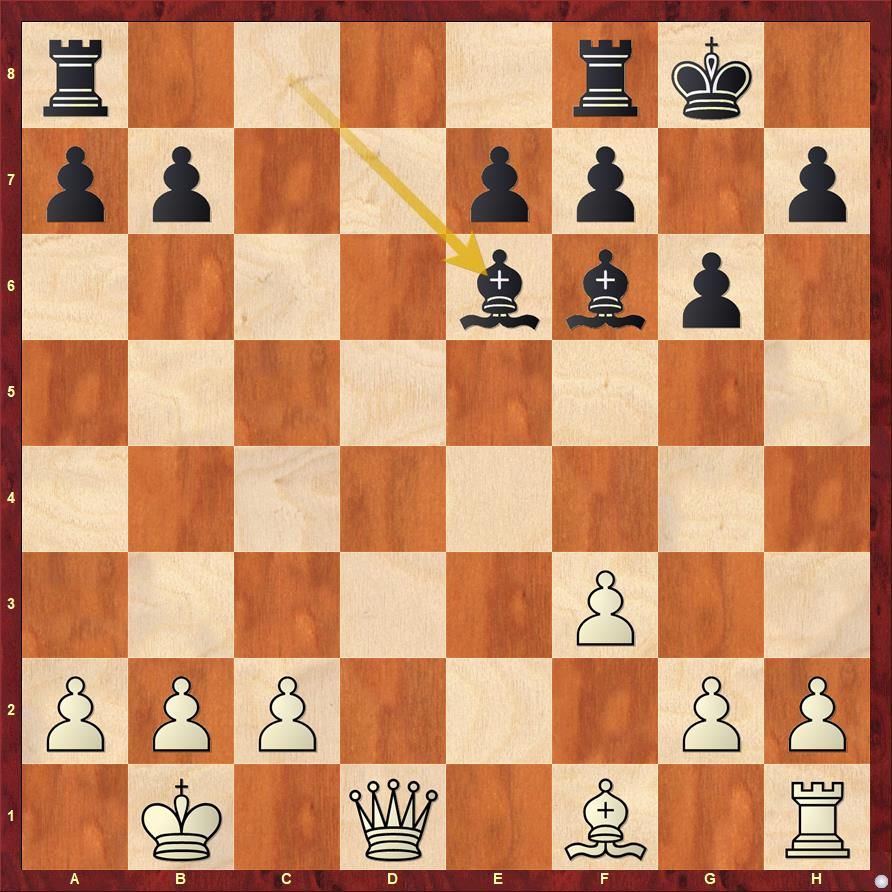 Black has an extra rook and a bishop but whether this is enough compensation for a queen is doubtful. 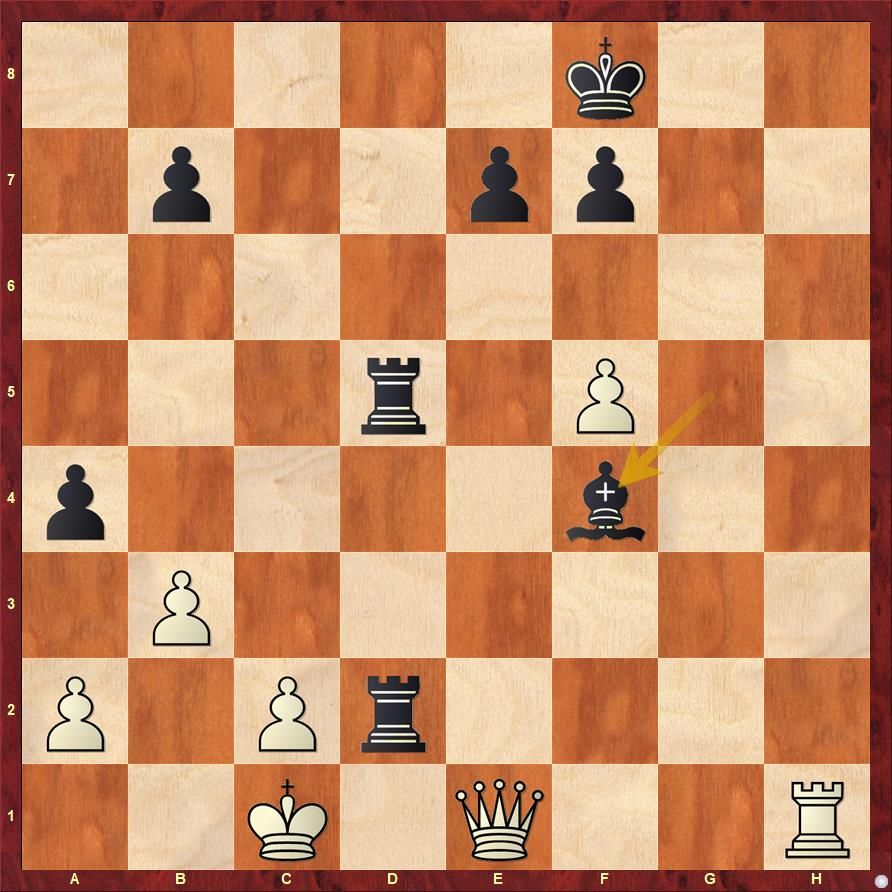 In this position however Black's pieces seemed active enough... White's initiative, if there was at all any, was now no more. 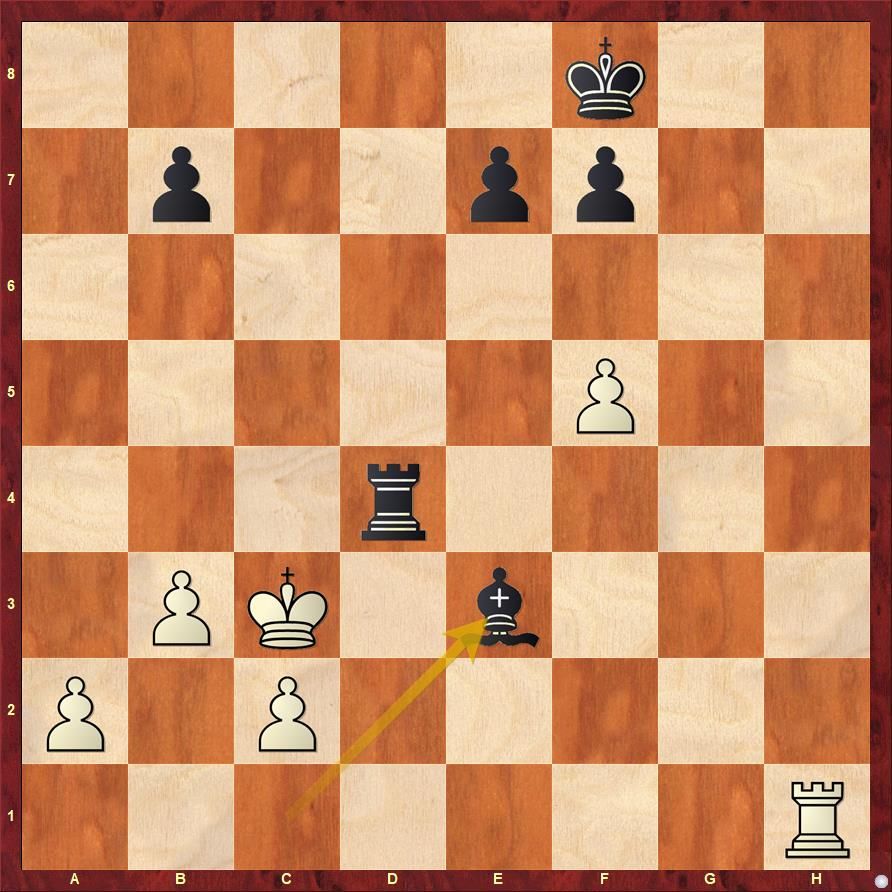 Black was eventually able to win the queen and in the above position (where Black has an extra bishop) White made the move Rh3, can you do better? Check annotations below for the answer.

In under-10 Open - along with Ilamparthi A R - Mayank C, Bharadia Yash, Raghuram Reddy, and Dakshin Arun also registered victory in the second round. While in girls section of the same category Sneha H and Indira P registered their second consecutive wins. 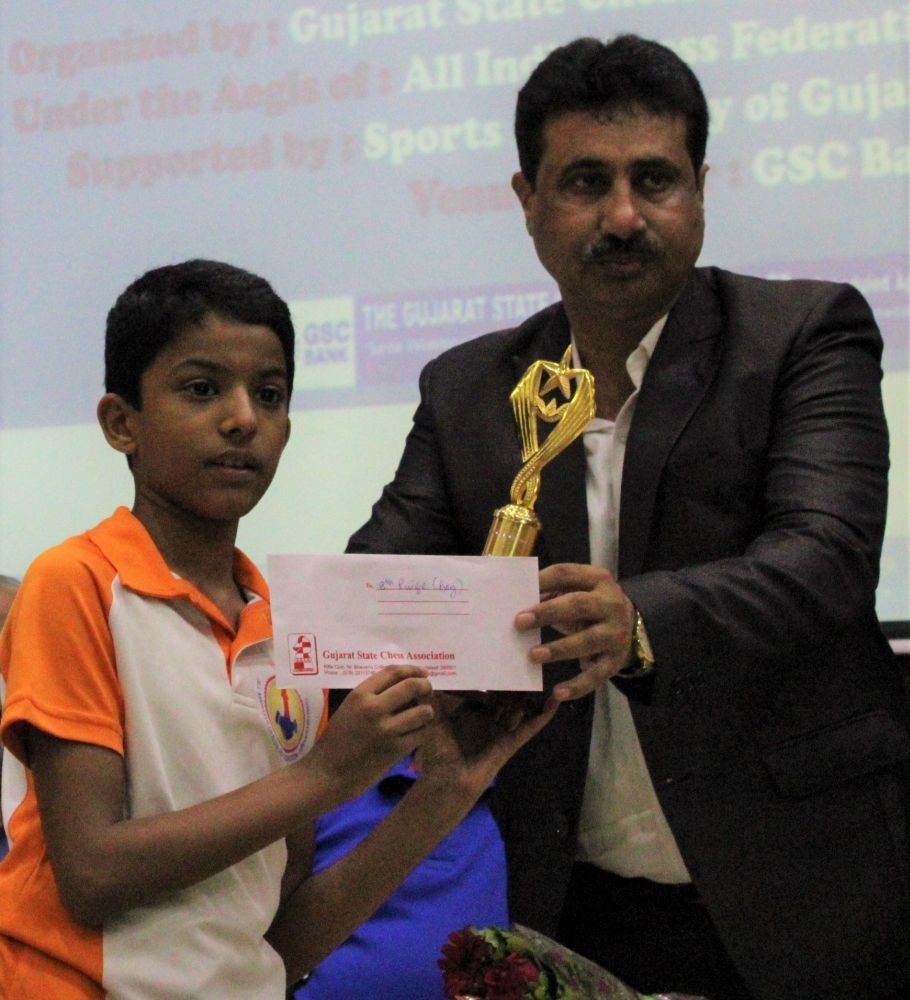 Vivaan Vijay Saraogi registered his third victory in the third round of the event to lead the table along with six others. This win the white pieces against a Sicilian Dragon was absolutely crushing. 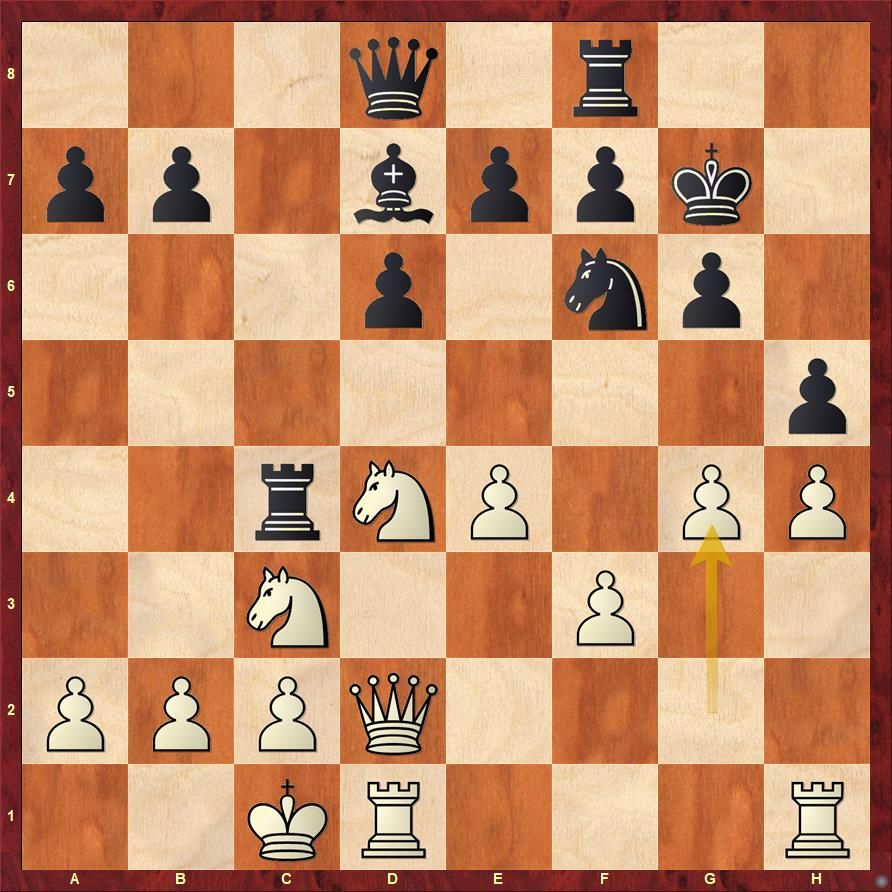 With 16.g4 Vivaan went all out against his chinese adversary. 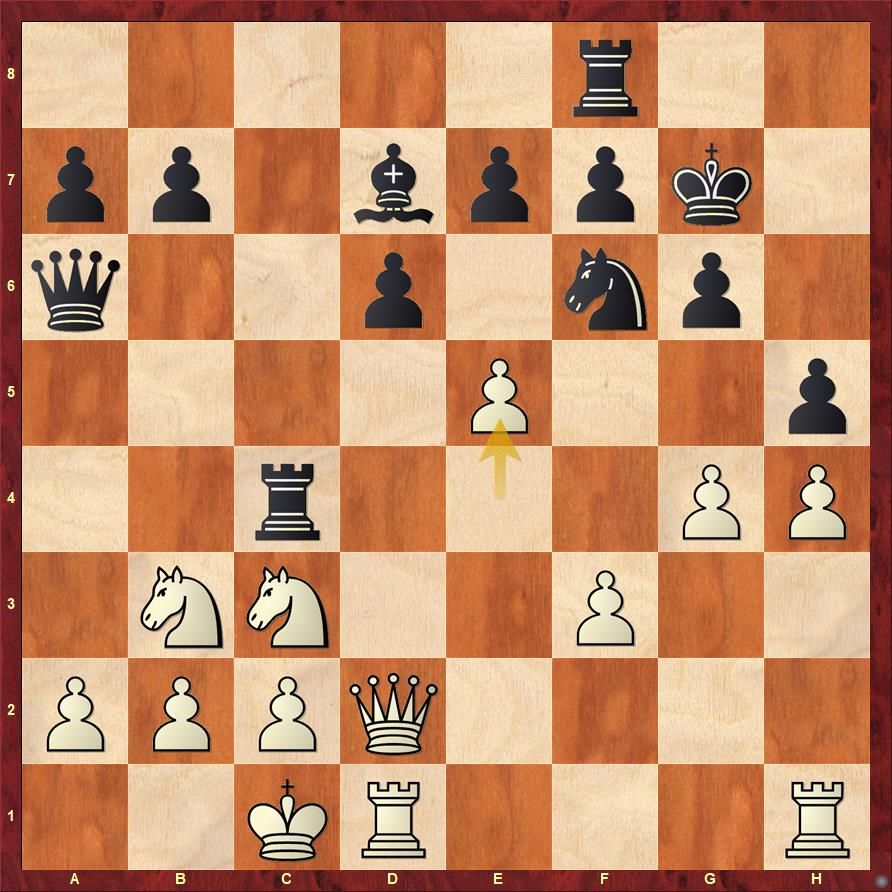 Black was afraid of g5 after dxe5 and hence went 18...Ne8 but this simply quickened matters. After 19.gxh5 Bc6 20.Qe3 dxe5 21.Qxe5+ White launched a deadly onslaught on the black king that ended only with a checkmate. Replay the full game with brief annotations below:

Rounds 4-5: Back to back wins for Mayank Chakraborty 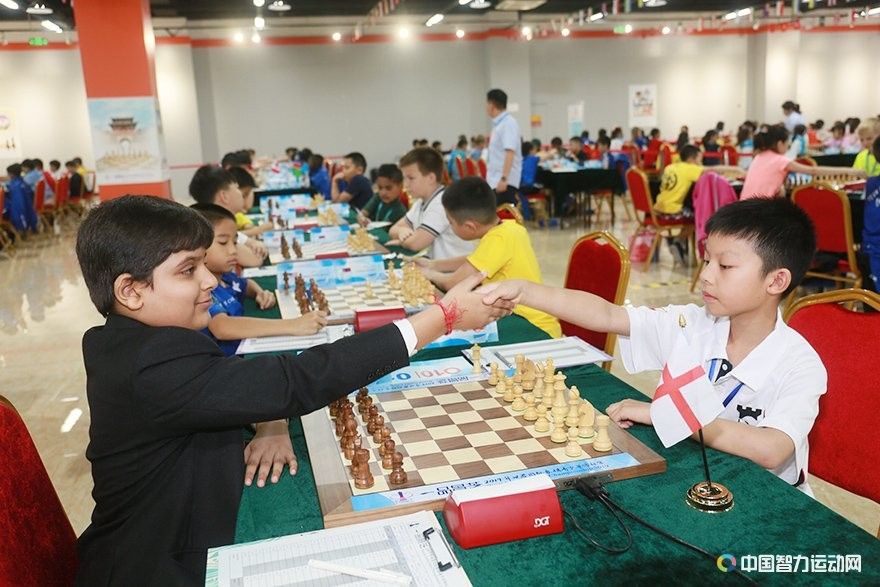 In under-10 open Mayank Chakraborty kept up his good form to register two consecutive victories in rounds four and five and stay at heels of the leader Marco Materia from France. On the other hand in round four Mahendra Teja Mekala emerged as the sole leader of the under-12 open section but lost this stature soon in the next round by losing to Mikhei Navumenka. Let us now see the highlights of Mayank's game against Wei Jianzhou from round five. 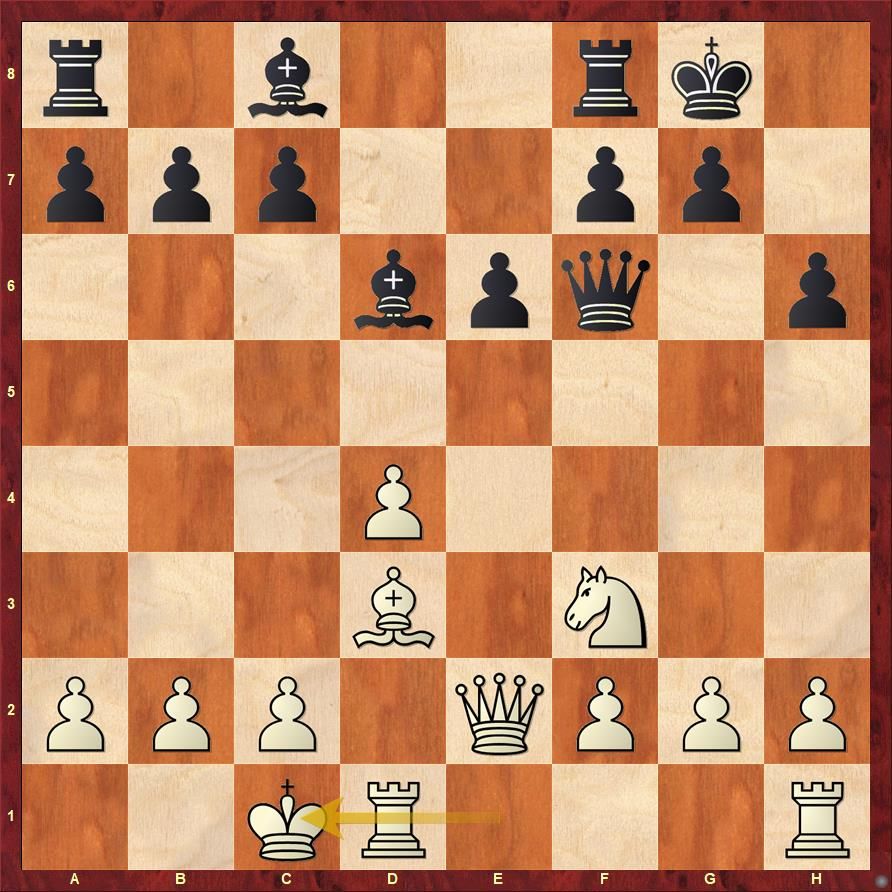 Black played the move 11...c5?! here but probably resolving the issue of developing the c8 bishop with 11...Bd7 would have been his best bet. 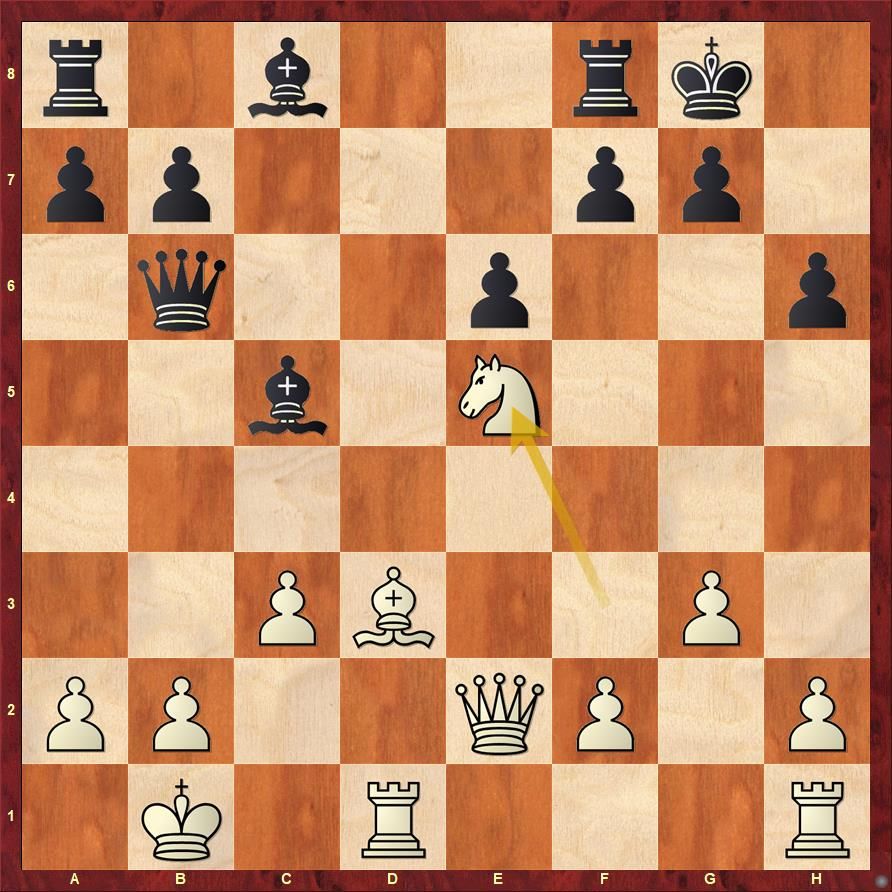 After 16.Ne5 Black's c8 bishop was doomed all the more to passivity. 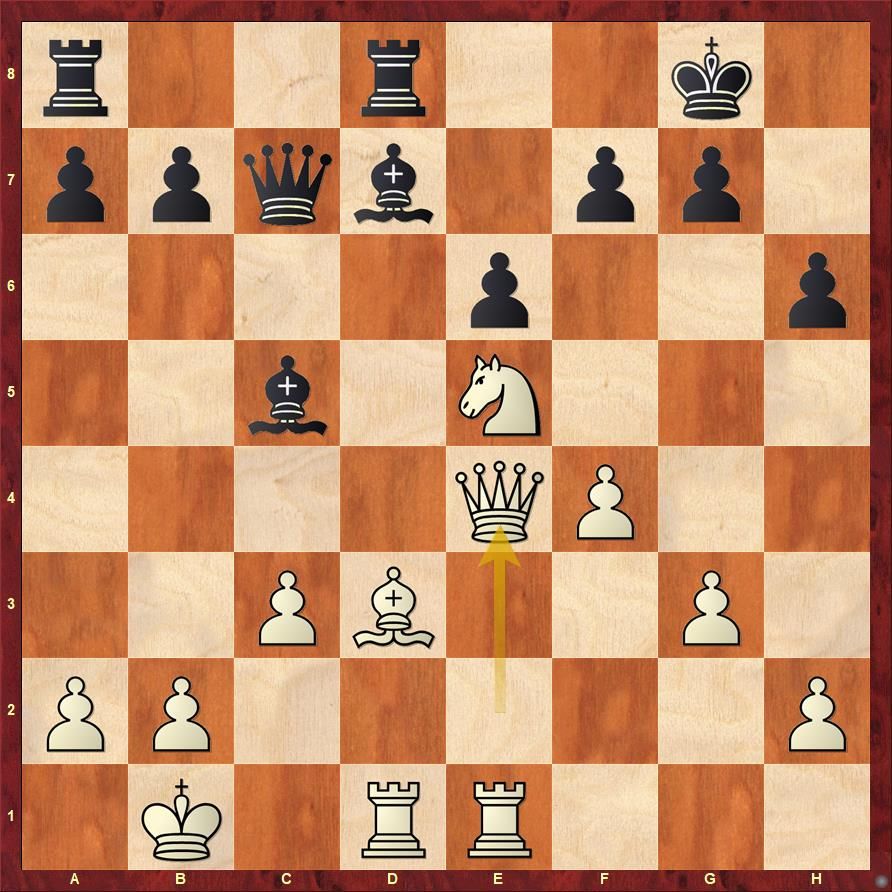 White seized more space on the kingside and with 19.Qe4 threatened Qh7+, Black's only option was to push f7-f5 but this only meant that e6 was now a soft spot. 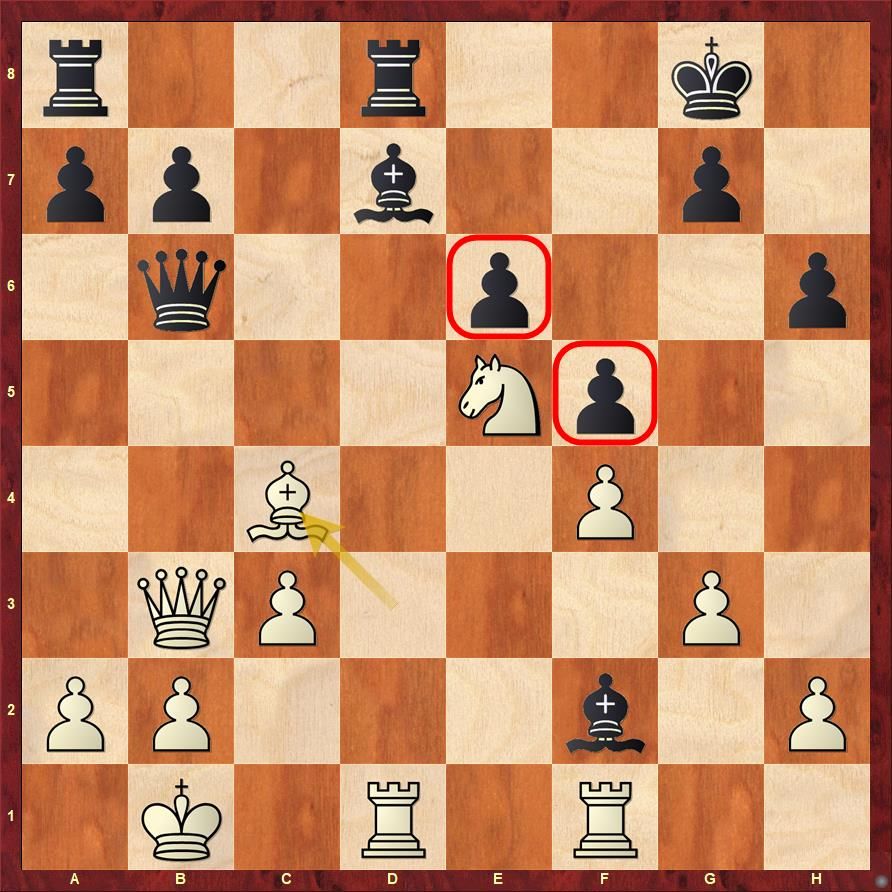 And soon Black e6-f5 structure was about to crumble.

Black soon picked up the pawns on e6 and f5 and went on to win the game fairly easily. Replay the full game below: 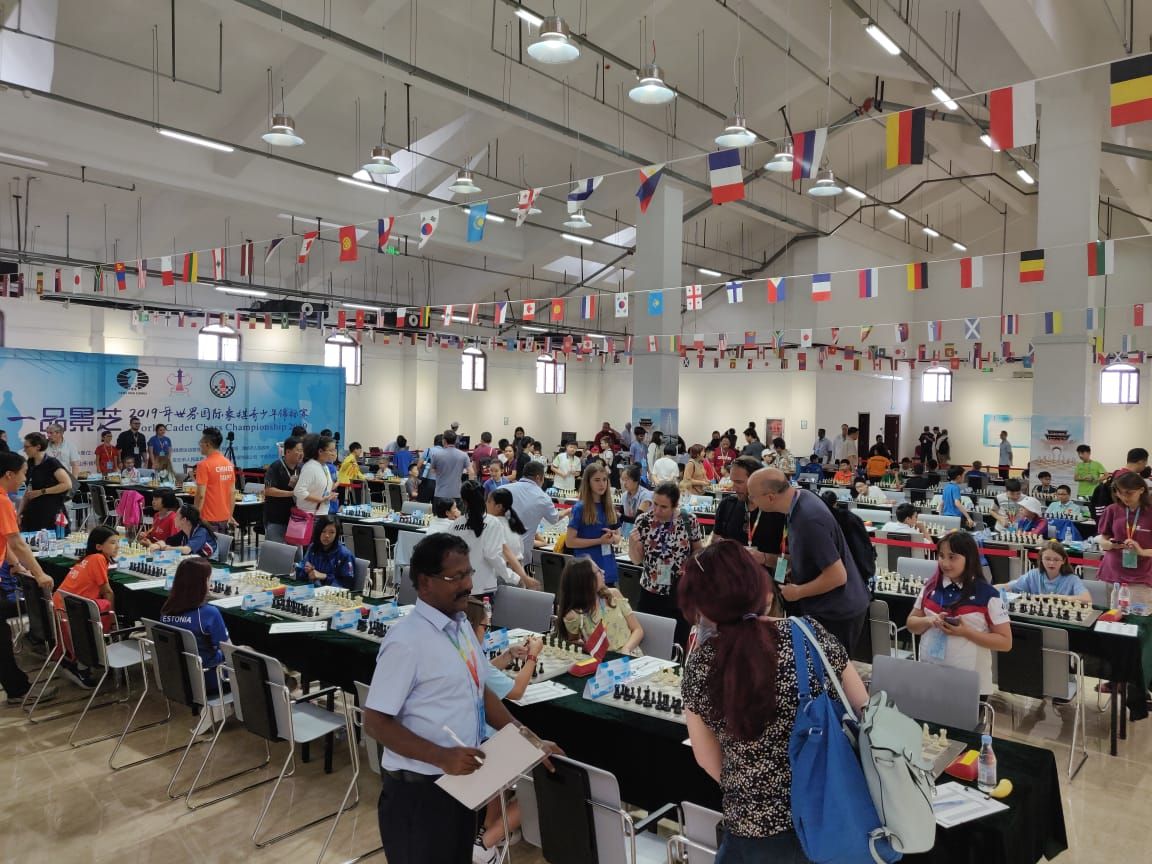 Playing hall of the under-12 section 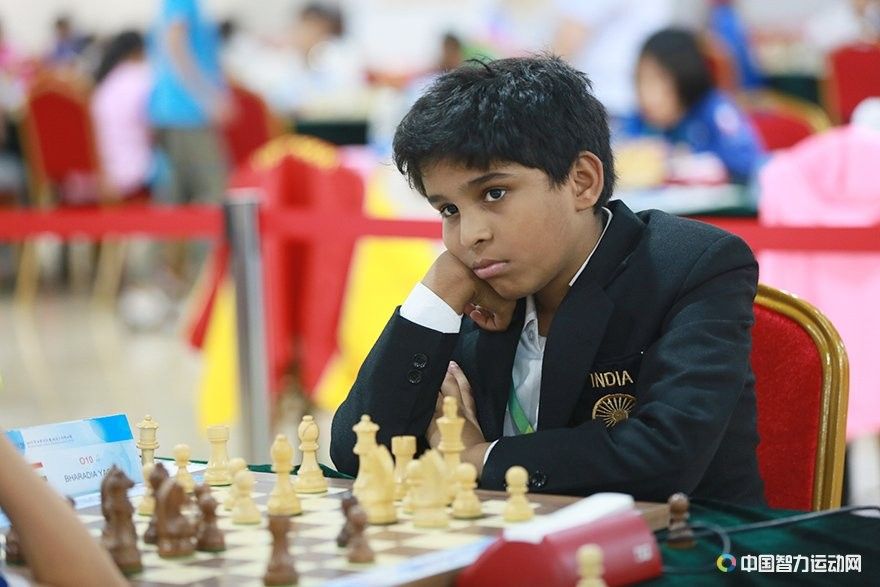 Yash Bharadiya, the fourth seed of under-10 open, has so far scored an unbeaten 3.5/5, drawing all his games in the last three rounds | Photo: imsa.cn 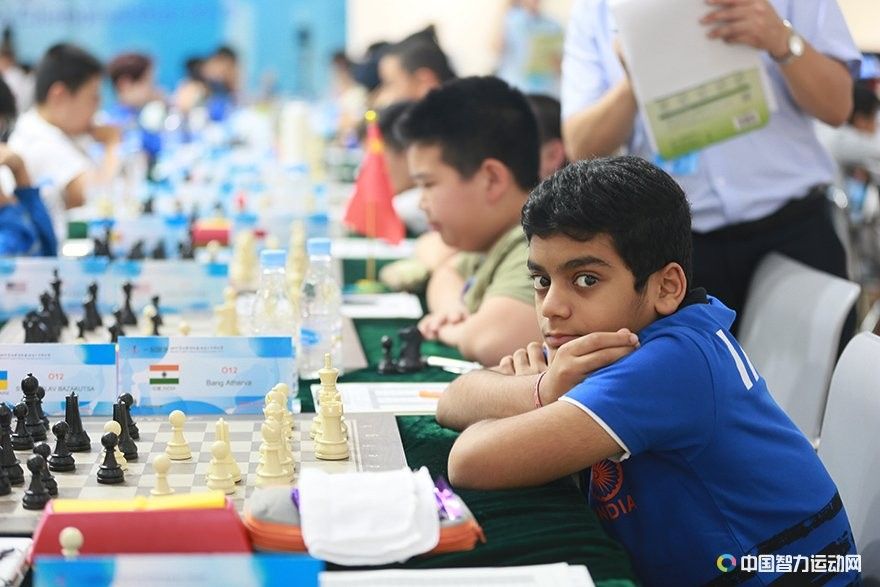 Atharva Bang  is having a tough time in under-12 open as he lost three out of five games. He defeated Boshoma Chifundo in the last round to take his score to 2.0/5 | Photo: imsa.cn 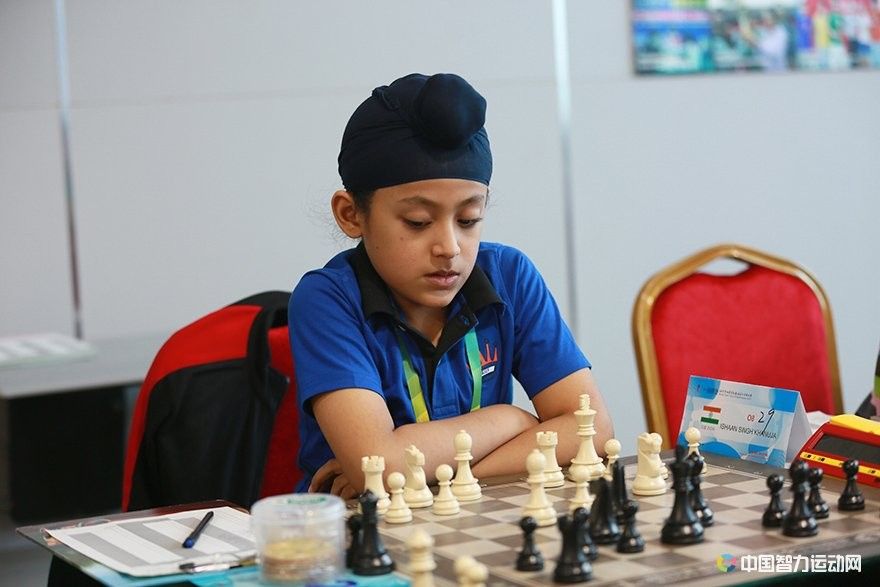 Ishan Singh Khanuja is on 3.5/5. He lost against Zhang Yuchen in the fourth round but defeated Roshan Sethuraman of USA in the next round with black pieces | Photo: imsa.cn 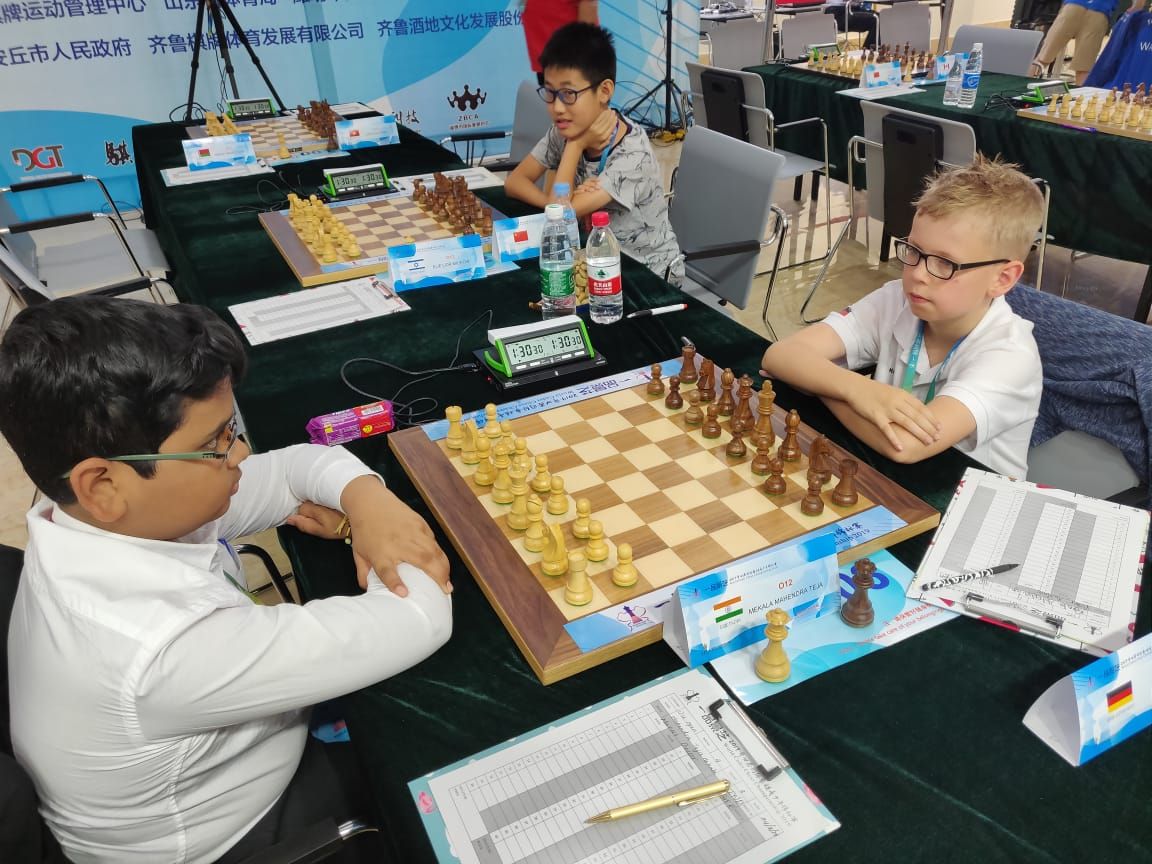 Mahendra Teja Mekala positionally outplayed his higher ranked opponent Deur Marius of Germany to emerge as the sole leader after the fourth round but lost against Mikhei Navumenka in round 5 to slip down the rank-list | Photo: Shantharam Kadanthaly Venkatraman

An overview of all Indian performances after five rounds

A special thanks to Shantharam Kadanthaly Venkatraman for sending us material from the tournament venue.