ACL Challengers League is open for all academies

After the successful completion of ACL 1st Super League 2018, ChessBase India brings you ACL 1st Challengers League 2018. The Challengers League is for all the teams to qualify for the 2nd edition of Super League. Top 8 teams from the Challengers League will qualify for the 2nd Super League. This time there is no restriction for the number of teams that can take part in each of the four rating categories (Unrated, 1000-1400, 1400-1800, 1800-2200). The format will be Swiss-League, so all teams get to play equal number of matches. All games will be available for download, so that everyone can prepare for their opponent and analyse their games to rectify their mistakes and improve. The time control will be 45 minutes + 10 seconds increment, so that everyone can play strong chess and prepare better for their upcoming tournaments.

The logo of Academy Chess League by ChessBase India 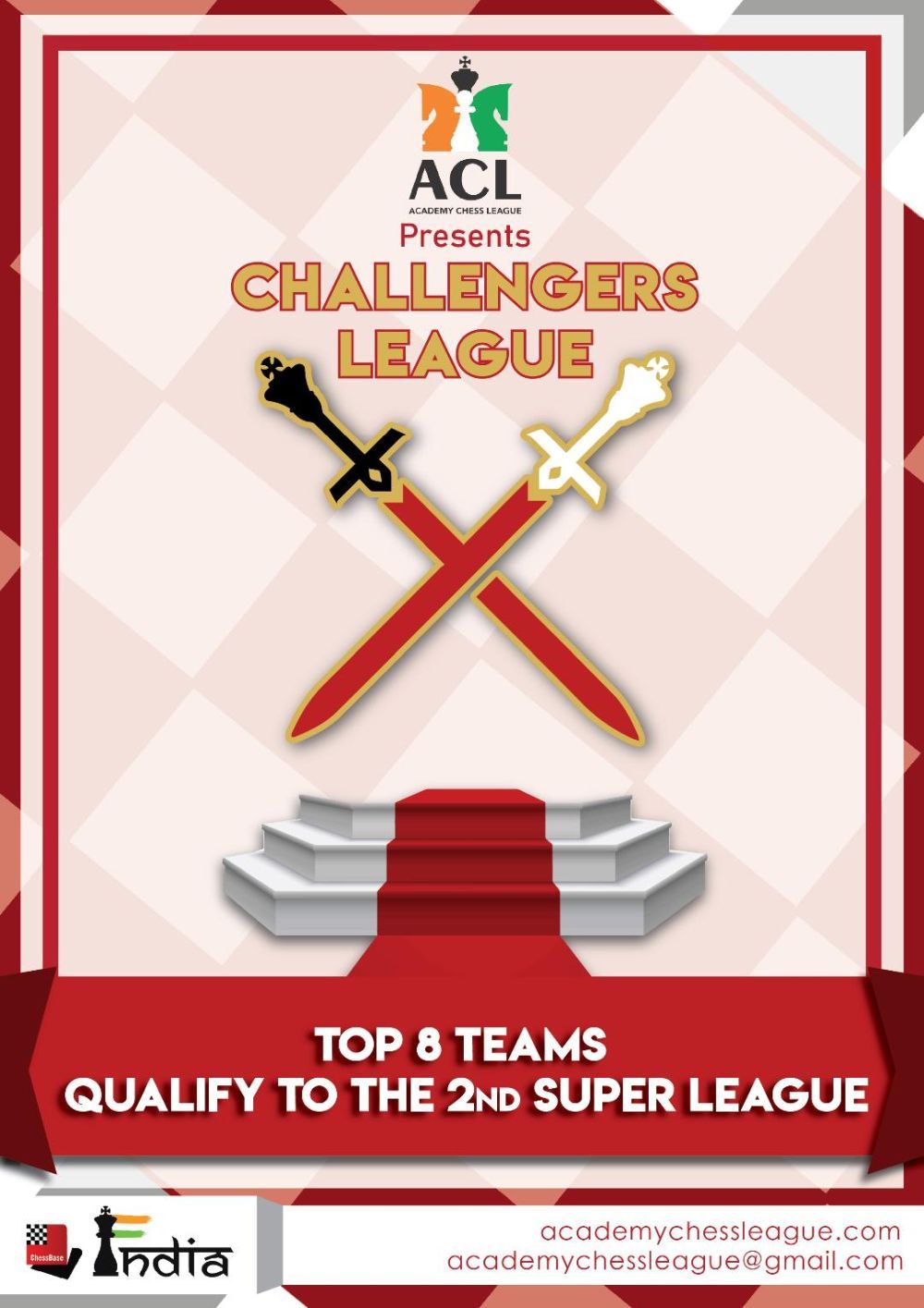 The Challengers League will be launched on 20th of October 2018. There are four rating sections (mentioned below) and there is no limit on number of teams that can participate in each of them. All academies in each section will fight to become the Academy Chess League Challengers Champions! So at the end of the first Challenger's League which will last for two months we will have four different champions in four different rating categories. The top 8 finishers in Challengers League will qualify to the 2nd Super League which will take place next year. They will be joined by the top 8 finishers of ACL 1st Super League 2018.

An academy has to enlist its team with a minimum of four members in any of the following rating category.

Four players are must in whichever category you decide to play. There is no maximum limit on the number of members in a team. New players can be added throughout the tournament and all players can be substituted in every round with prior information as per the rules.

** The FIDE rating on the first of the month is what will be taken into consideration. As the 1st Challengers League will begin on 20th of October, the ratings as on 1st of October will be considered.

***Players who are not associated with any academy/club, can form their own team and give a name and logo, assign a coordinator and submit their details as per the form.

Note: As an academy you need not have players in all sections (we would be happy to have your academy in all sections!). You can decide that I would like my students to take part in only one category - say 1000-1400. Then, you will need minimum four players in that rating group, but you can also have more and then substitute them. You can keep adding more players during the entire duration of the league. 24 hours prior to the match you will have to decide on the four players that will play from your side and email the board order. Sending board order via call or message will not be accepted, e-mail is the only way. If an academy wants to have more than one team in a category then they can take part as team-1, team-2 or team junior, team senior etc.

Seeding in the league:

The participating teams in one rating section will get to play 7 matches as per Swiss League pairing system. At the end of all 7 rounds, top 8 will move on to the 2nd Super League which will take place next year. The first tiebreak will be game points.

The time control of the event is 45 minutes + 10 seconds increment. We deliberately kept the time control for a long serious game, because we want the players to indulge in a game of chess that is closest to the classical time control and improve.

No player will be allowed to play in the Academy Chess League if he is not a ChessBase Premium Account member. ID and account sharing is strictly forbidden. Any player doing so will be banned from Playchess forever. It is the team manager's responsibility to check the id if it is having any issue or not. Last moment ID change will not be allowed under any circumstance.

It is recommended to play on a wired connection with a minimum speed of 2 mbps. It is absolutely discouraged to play through phone's wifi/bluetooth/usb tethering as one phone call can disrupt an entire game. All players must play some practice matches in the playchess desktop client to be familiar with the interface and understand the stability of their internet as it is very important to have a smooth experience.

The first Challengers League will take place in the month of October, November and partly December. The games will be announced well in advance. We will be releasing the detailed schedule once the teams are finalized, but it will start from 20th of October for two months and every team will have to play maximum of only one match per week.

This event is mainly aimed to provide high class playing practice to students of academies. The main motivation is to improve as a chess player and not the prizes. But we will ensure that the winning team gets a glittering trophy and all the players of the participating teams will get certificates. There will also be best game in each round prize in all four categories. 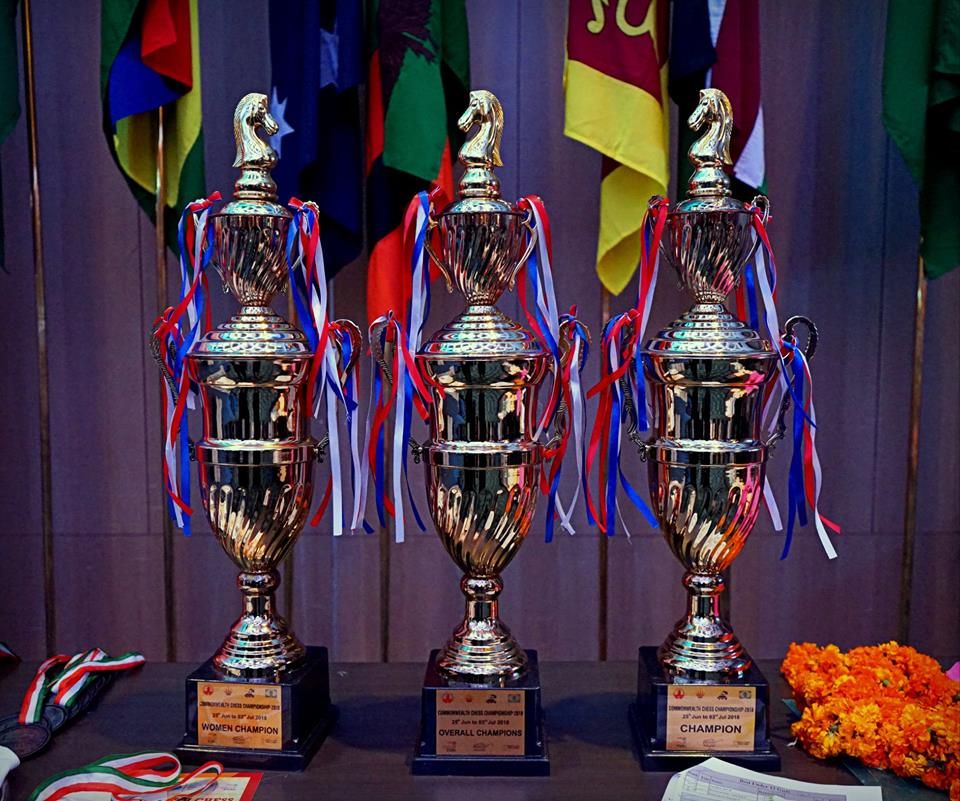 With the Challengers League we have introduced that each winning team in all four sections will get a glittering trophy. All participants will get a certificate with their names on it and also the points they have scored and the placing of their academy.

Open to all academies of the world:

Although the ACL is primarily aimed at Indian academies at the start, we would be happy to have International Academies. The only issue is if they win, how to send the trophy, but we will figure that out!

1. High quality practice games for players in their rating categories

2. Ready games for coaches of the academy to analyze the mistakes of their students

3. Playing against opponents all over the India and the World

4. Get to play from the comfort of your home or academy. No travelling.

5. No entry fee! The ChessBase Premium Account can anyway be used to become a stronger player with all its features.

6. Attractive prizes to the winners.

7. Exposure to the academy with regular reports about the matches on ChessBase India.

* Accepting or declining the entries of any team is at the sole discretion of ChessBase India. Rules and Schedule may be changed by ChessBase India at any point of time if deemed necessary.

The entry fee to play in the Academy Chess League is just the ChessBase Premium Account. You get to play games against players all over India and the world. Your academy gets exposure and becomes popular in the process. This is one of those initiatives where you have everything to gain and nothing to lose. So don't miss out on this opportunity. Join us in this mission of Powering Chess in India! The academies who are interested in taking part in the upcoming ACL 1st Challengers League must fill up the form below:

You may also click here and fill up the form

In case of any queries, write to us at academychessleague@gmail.com or contact us on 09038139510 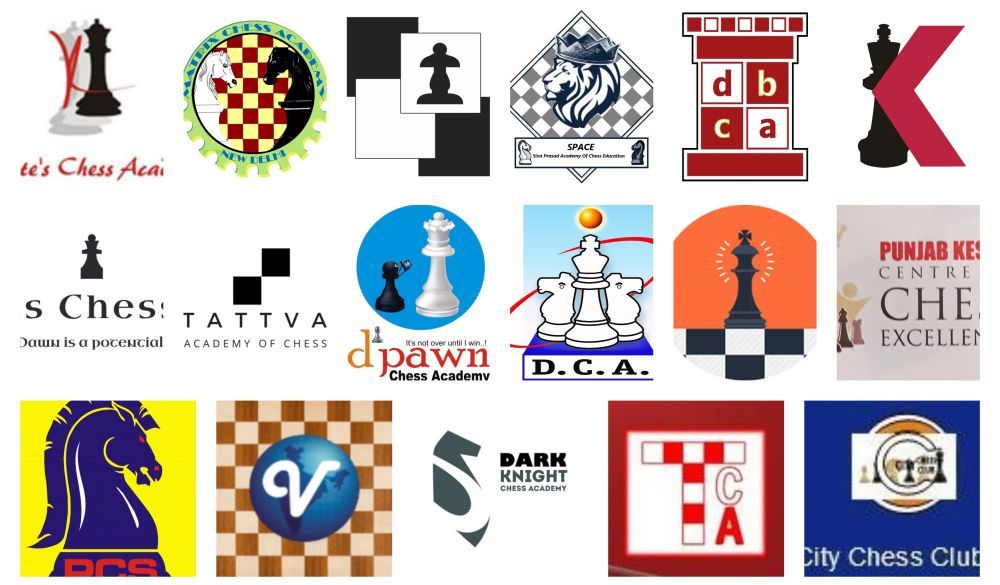 All the articles on 1st Super League published on ChessBase India:

The launch of Academy Chess League

ACL 1st Super League 2018: KCA and DCA are the finalists in Unrated category