IM Nisha Mohota is one of the strongest female chess players of India. Even after three decades of actively playing chess, her love for the game is very much intact. She has won multiple accolades in her career both in the country and internationally. She takes the time to write down her experiences both on and off the board for all chess readers as well as non-chess players too. She wrote one a few days on her experience in playing at Lienz, Austria, how she fell in love with the beautiful city and more. In Part II of her article, she answers the question asked at the end of part I and explains variations in detail, engines' role and how a GM friend of her reacted when the position was given to him and more. Photo: Nisha's blog

In chess it is much simpler when one person knows the solution and gives you the problem so that when you say you have solved it completely, he can tell you to look further. Kiran and I first tried to find some quick finish with some jigsaw movement of the queen - we are all familiar with that motif from lots of combinations that we have solved- failed in the attempt and then realised that we could not keep the queen, so needed to sacrifice the queen for the f-pawn and then push the queenside pawns. We found multiple moves to get the desired aim of giving up the queen and it looked completely winning. Why did Raunak say there was only one win? Probably he meant only one idea- give up the queen! 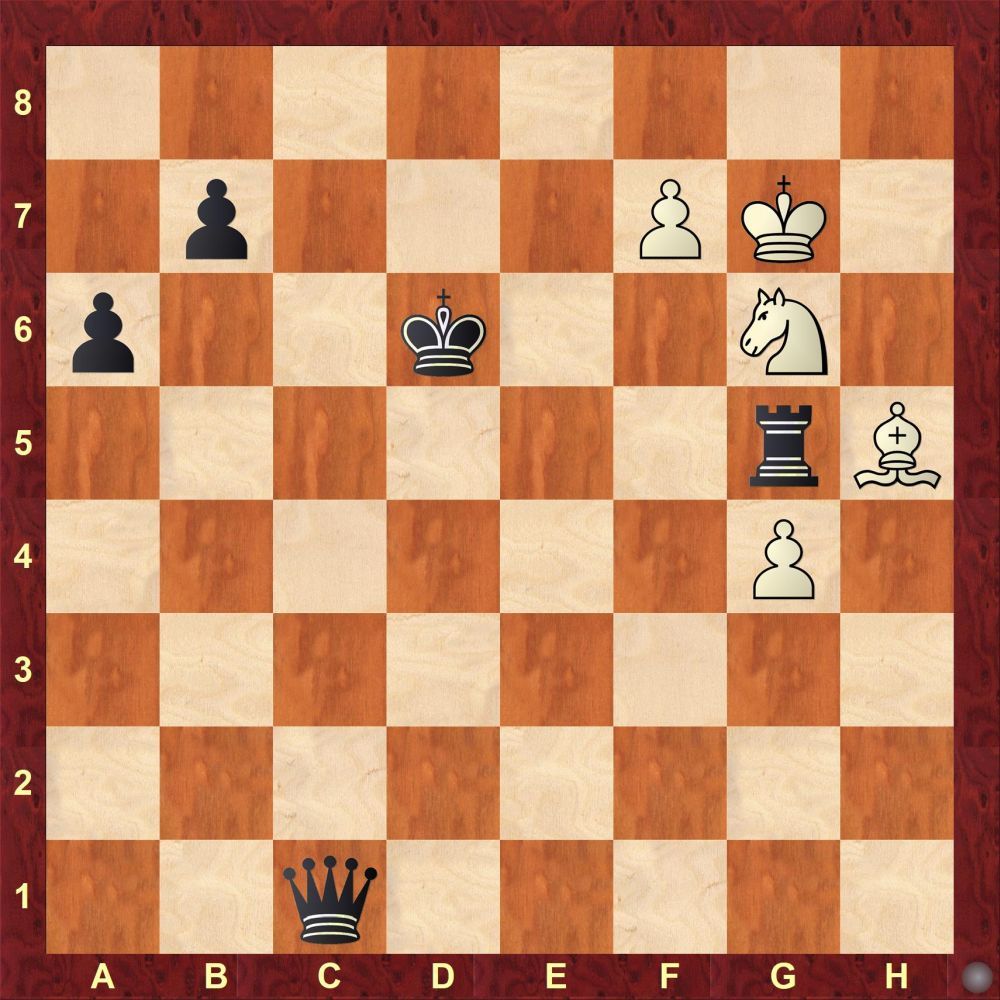 The Valentine's day on-the-board composition by Raunak and Ruff

So our answer was very simple. 60...Qf4 61. f8=Q Qxf8 62.Kxf8 a5. White's pieces are not coming to the queenside, we had pushed the White king further away by a capture on f8 and we win by marching the farthest pawn- the a-pawn! We thought this to be as simple! Now that we had 'solved' the problem, we thought of putting our engines on and checking. 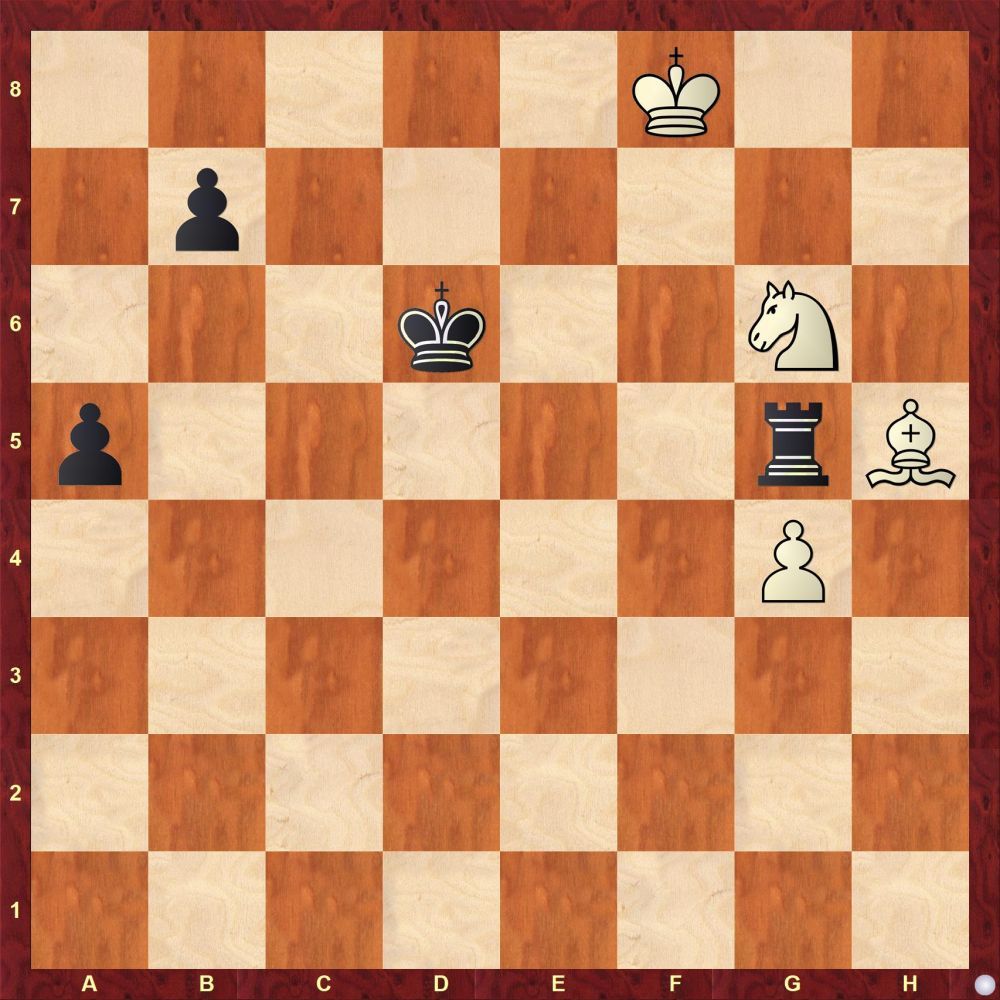 Position after 62...a5 in our analysis

This position looked completely winning to us! We thought problem solved! How easy can chess be if opponents did not give resistance! White to play. Can you find a wonderful idea of defense spotted by our engine?

Our engine found a fantastic idea - 63.Nh8!! The idea is to play Nf7 and then start rolling the g pawn! Simply brilliant. Other moves instead of Nh8 do not work. A sample line is 63.Nf4 a4 64.Ne2 a3 65.Nc1 b5 winning for black. Similarly 63. Nh4 does not work either but I do not want to stuff my article with variations. 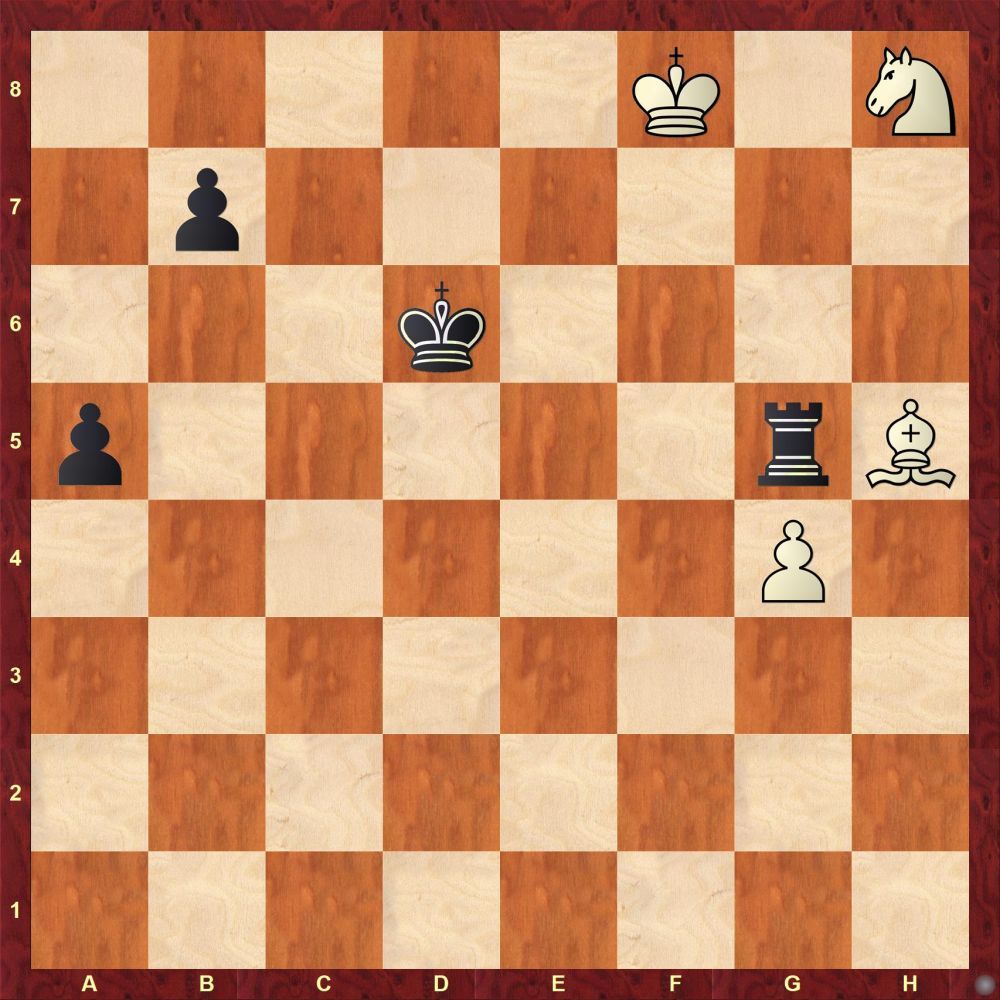 Position after the fantastic 63.Nh8!

White is threatening Nf7+ forking the king and the rook. Surprisingly there is only one way for black to keep trying for a win! Can you spot it?

It is easy to reject the rook moves as then the h5 bishop is released. So where to move with our king? Again here it is the most counter-intuitive move which is the answer! The correct move for black here is 63...Kc7!! Now that I know the engine variations, I can tell you the danger of going with the king to the other squares briefly. 63...Kc5 looks like the most obvious move but it blocks the rook's path along the 5th rank, and king on the light squares, become a victim of a check from white's bishop (like Bg4+)! 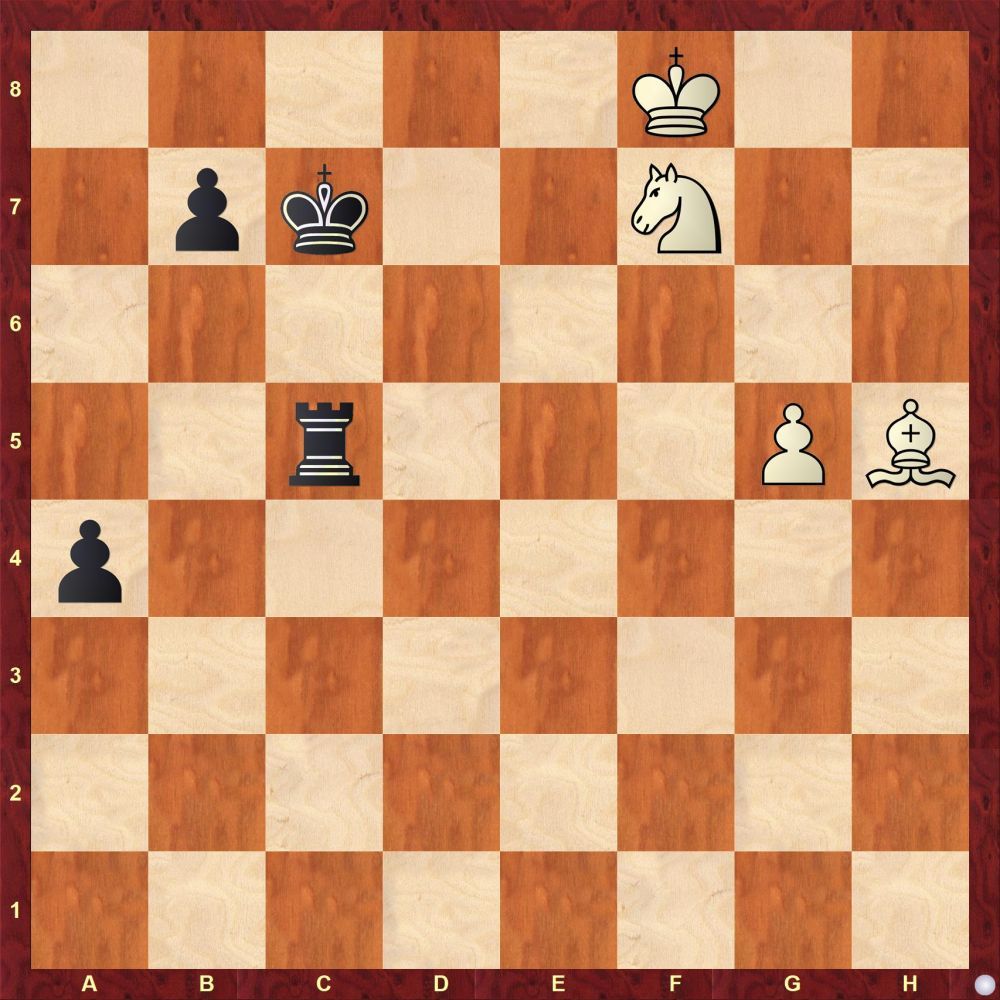 Now a very small trivia for the non-GMs who might be getting bored with the maze of variations. 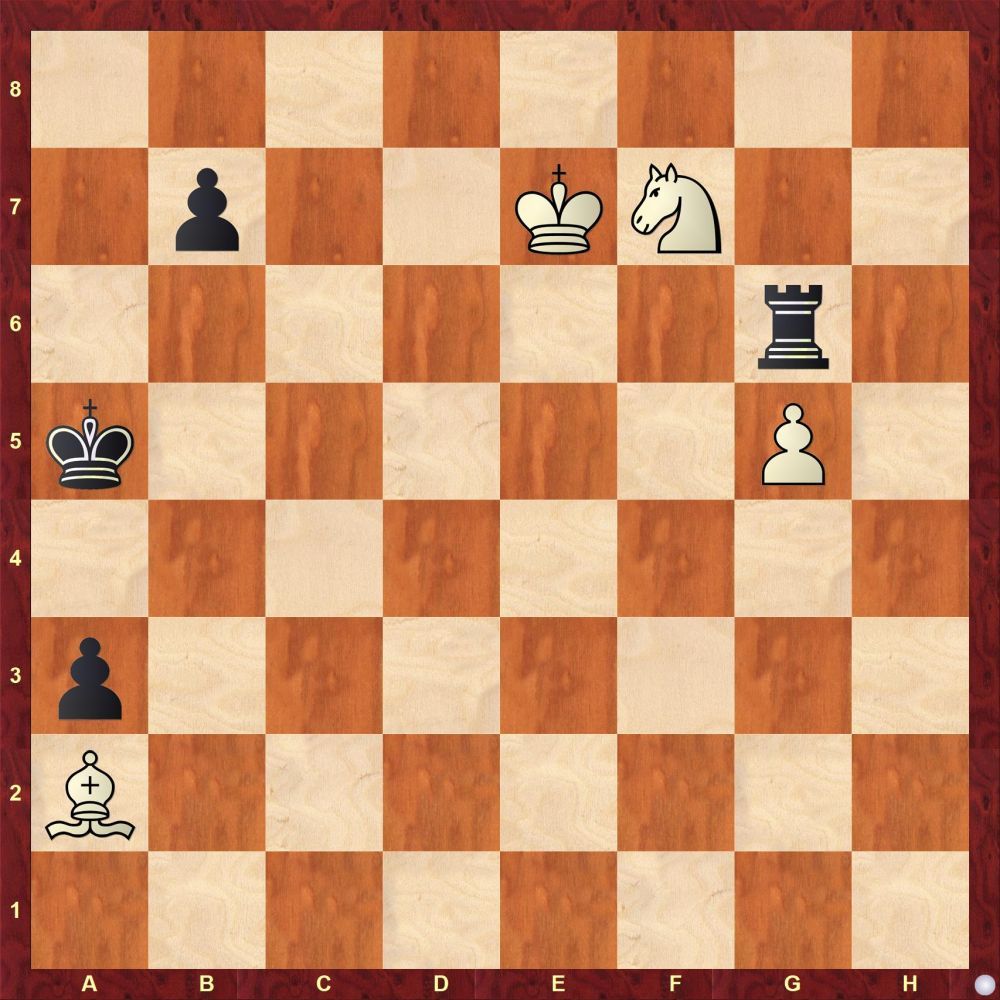 Very interesting to note is that the natural move 71.Nd8? loses here as shown below: 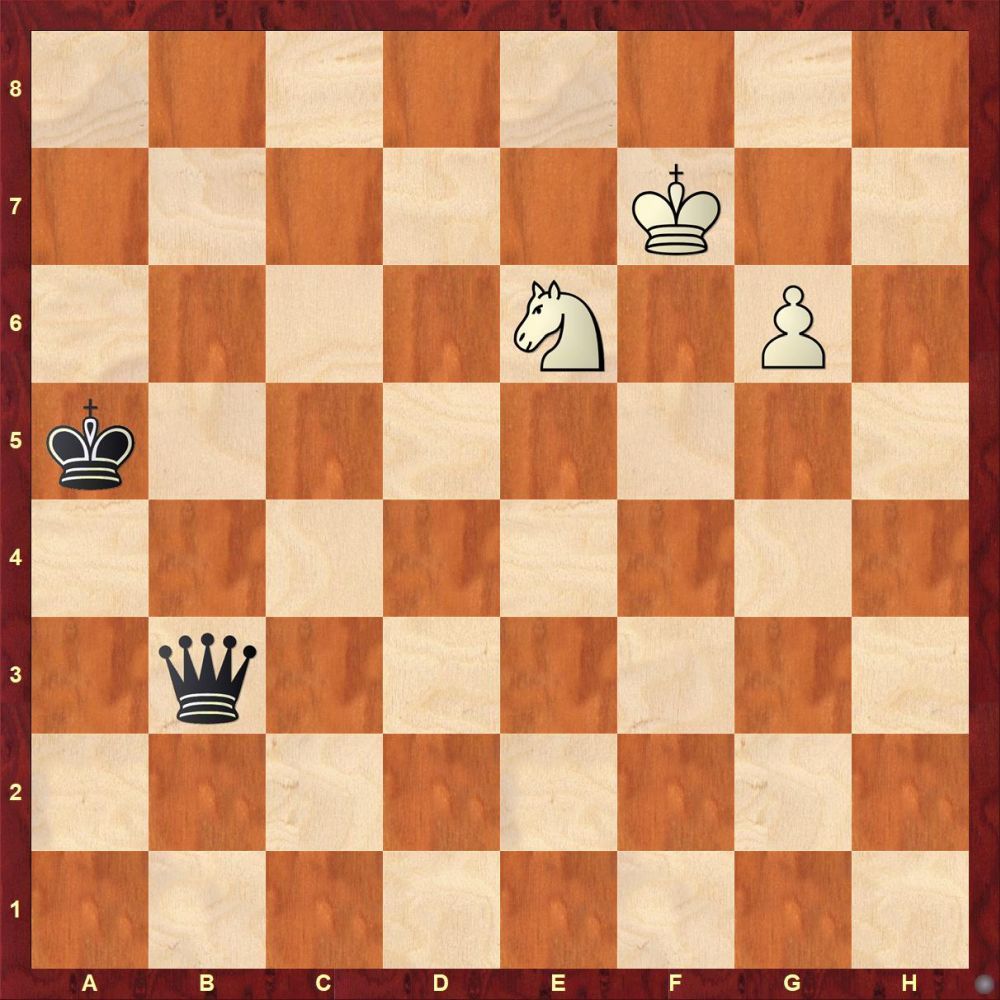 The correct variation is 71.Bb1. I really liked the last position after 78.Ne6 which is surprisingly a draw as the queen is fighting against three pieces! I took you around these maze of variations because I wanted to show to you this last position!

After Kiran and I saw these maze of beautiful variations shown by our engine, we realised "Oh, that is why we should not allow the Nh8-Nf7 idea!! Once we realise this, the solution becomes easy. The first thought that any human gets after seeing the position after 60.f7 is to drive the opponent's king away from the g-pawn and so we capture the f-pawn on f8! But the solution is counter-intuitive-  grab the pawn on f7 and not on f8 so as not to allow the knight maneuvering ideas of White!! The simplest solution is 60...Qc7!! 61.Kg8 Qxf7 and Black is winning as White's pieces are all jumbled up on the kingside!

There is an alternate way to win for black- grab on f8 when White has to take on f8 with the knight , but the win is simply too complicated, so I will not explain it, but for the sake of completion, I will give the main variations in a diagram.

Complicated way to win- take on f8 when White takes Nxf8 and then push the a-pawn. The end is very beautiful in this variation but only engines can see this far!

This is the second complicated way to win as pointed out by my GM friend- take on f8 when White has to take with the knight and then push the b-pawn. TableBase tells that the last position is winning. I did not delve further.

So basically this problem has two solutions - the easy one (which is not so easy to arrive at!) Qxf7 and the difficult one with Qxf8 and Nxf8. If someone spots Qxf7 in one go, then he misses the fun of the problem!

We do not like long engine variations. But what do we do when we get such positions in our own games? As you see, Ruff played a nice game, he was winning all through but he was under pressure. He was playing a highly talented kid who has been recognised by none other than Anand! The general pressure of playing a strong player also leads to time pressure. I gave this position to a good friend who is a very strong GM. My friend thought that this was a study! Later when he came up with the correct solution of grabbing the pawn on f7, I asked him how he arrived at the solution. He said that he started with all the variations with Qxf8 Kxf8 and then found Nh8, then he shifted his focus and then suddenly realised that he should not allow Nh8-f7 at all and so capture Qxf7! So I would say that for top players, part of it is calculation and another part is an intuitive feeling that there is something better in the position! 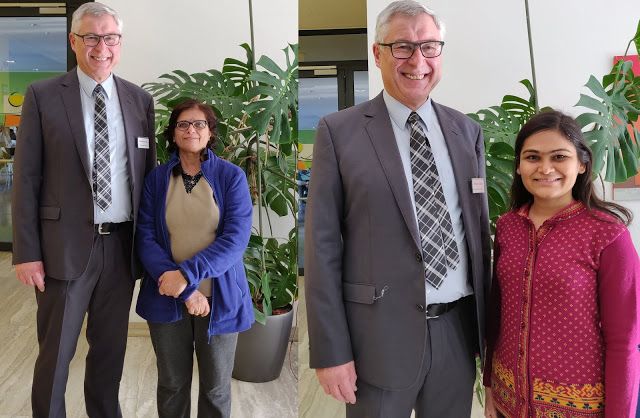 I end this article with sincere gratitude to the tournament director, Georg Weiler, who is one of the finest organisers that I know. He does his best to take care of all the problems of the players, is forever smiling and is extremely helpful, be it with your trip planing, invitation letter or anything else that you might need in Lienz. I definitely look forward to Lienz Open 2021!