Seven players are in the lead with 6.0/7 at the conclusion of round 7 of 12th Chennai GM Open 2020. Top seed Pavel Ponkratov, second seed Jose Eduardo Martinez, Visakh N R, Sergei Yudin, Aleksey Goganov, Stanislav Bogdanovich and Vishnu Prasanna are in a seven-way lead. Only three rounds left and with seven players in the lead, there is no clear favorite to win the tournament, it is still open for anyone to win. PDS Girinath used element of surprise to beat Karthik Venkataraman, Jubin Jimmy kept his norm hopes alive by beating Sayantan Das. Round 7 report with games, photos and analysis. Photo: R Anantharam

Visakh and Vishnu among the leaders

In a battle between top seed GM Pavel Ponkratov (RUS, 2622) and second seed GM Jose Eduardo Martinez (PER, 2606), pieces got exchanged at regular interval. The game liquidated into a double bishop vs bishop and knight endgame in just 25 moves. 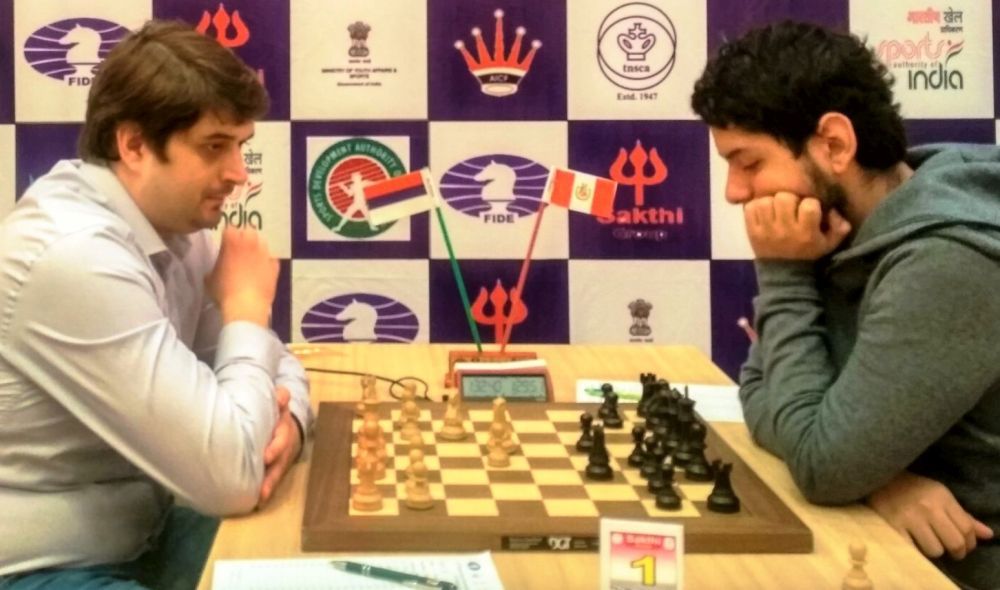 Battle between top two seeds ended up in a draw| Photo: R Anantharam 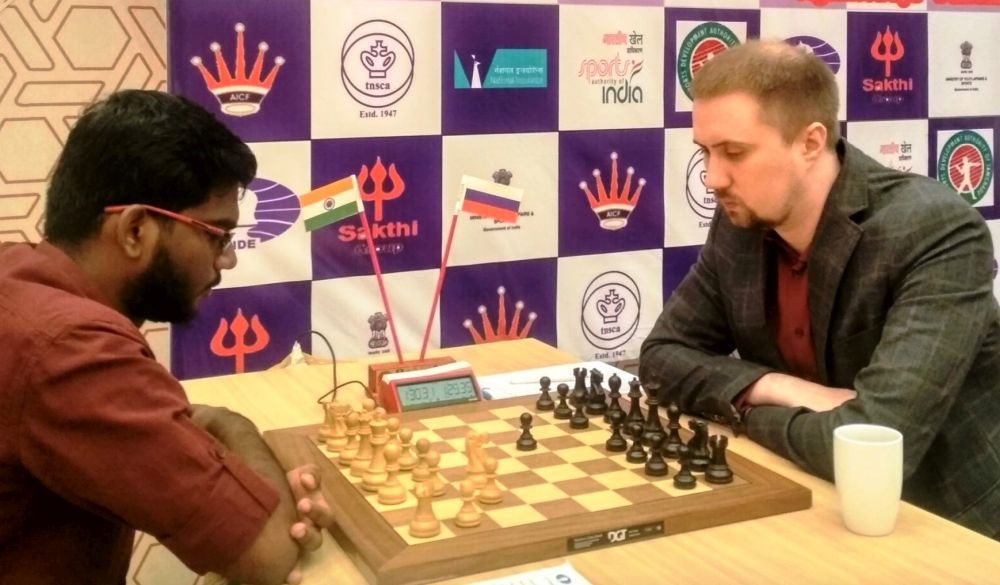 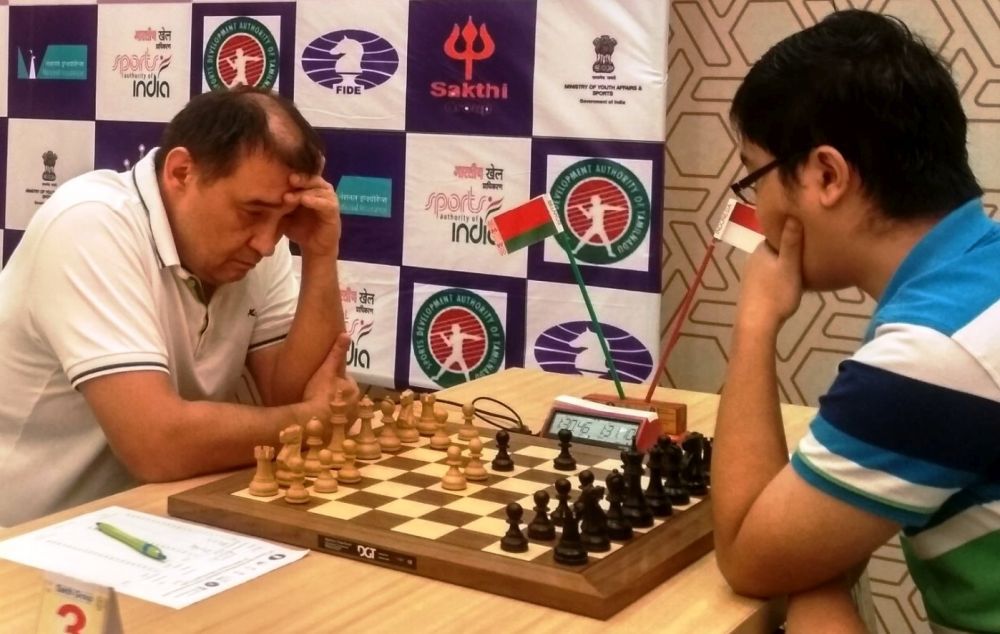 Aleksandrov was held to a short draw by Taher | Photo: R Anantharam 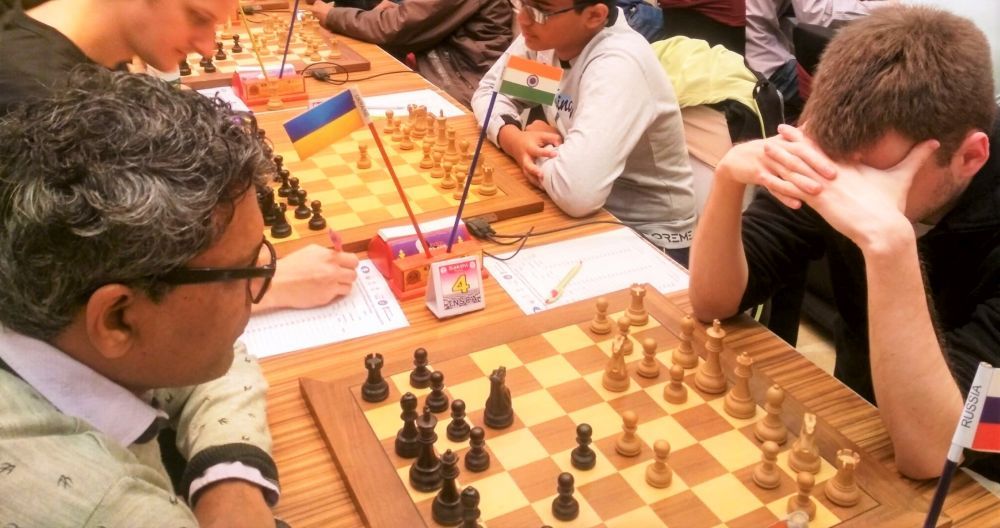 Bogdanovich is back in the title picture | Photo: R Anantharam

Harshavardhan G B (2343) survived a massive scare and managed to salvage a draw against GM Rodrigo Schroeder Vasquez (CHI, 2487). 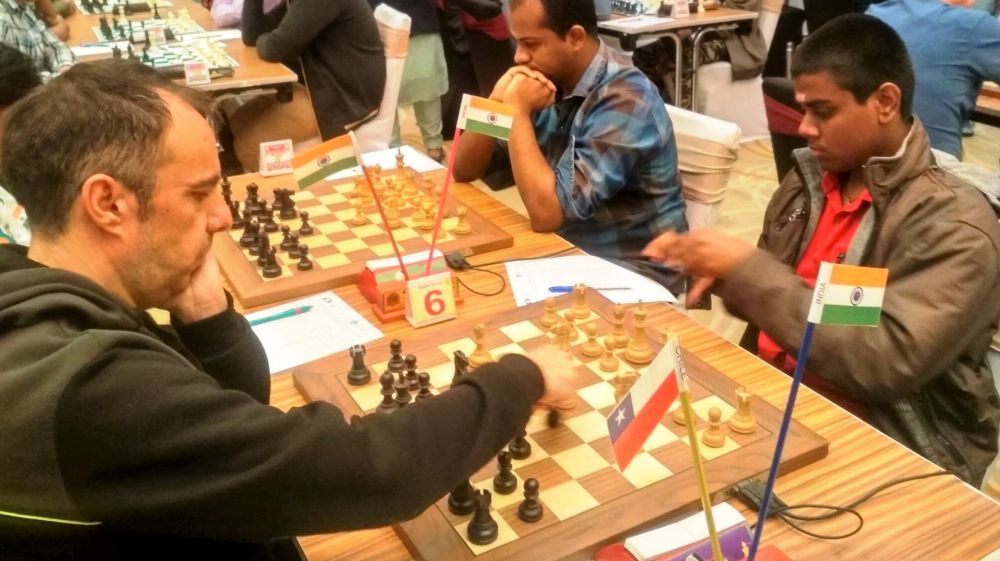 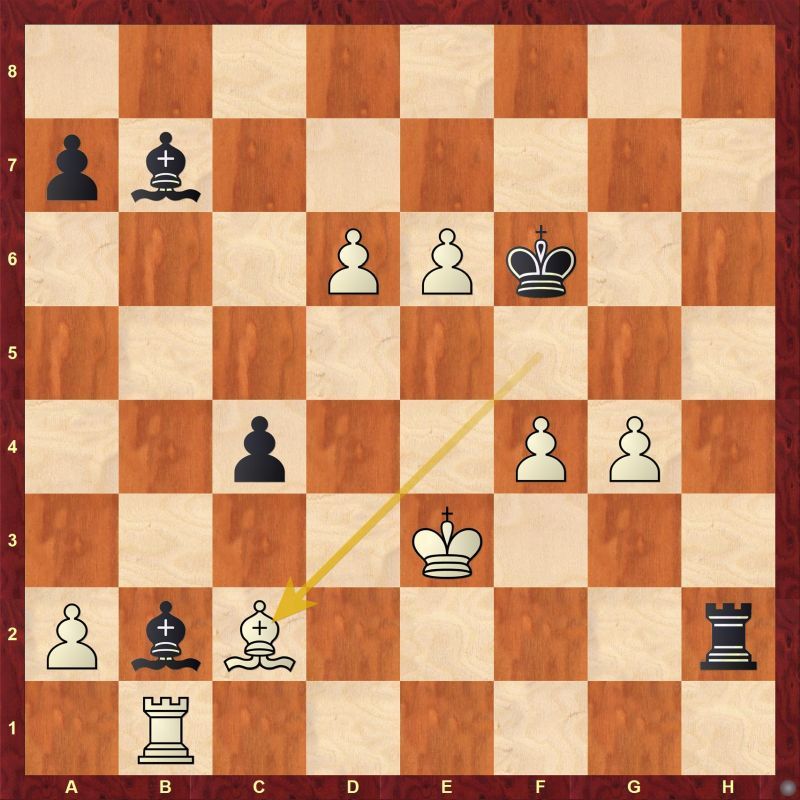 Find out the correct continuation for black after 33.Bxc2 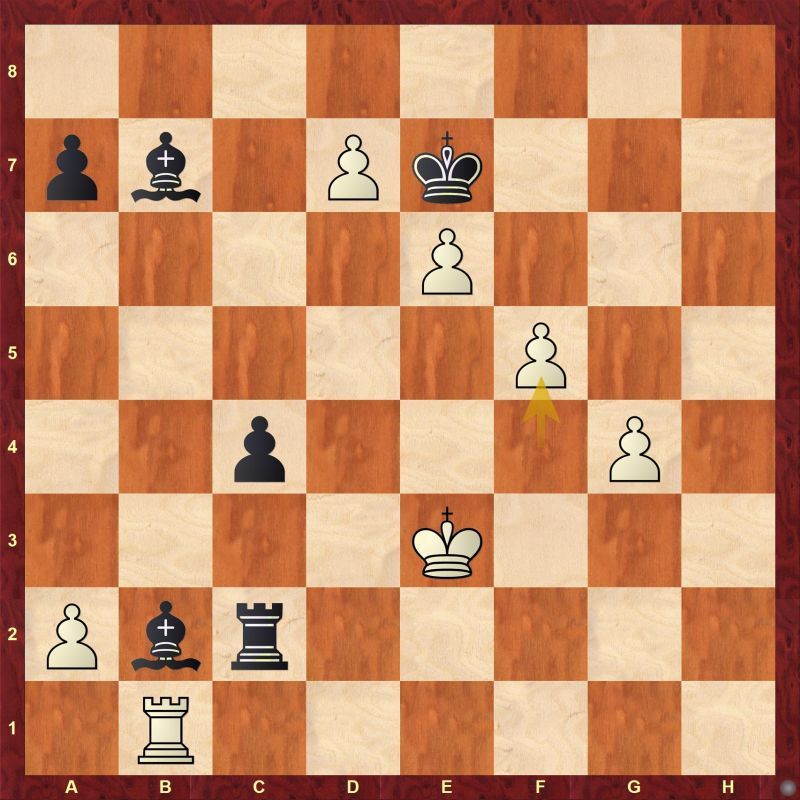 How should black continue after 35.f5 to go for a win? 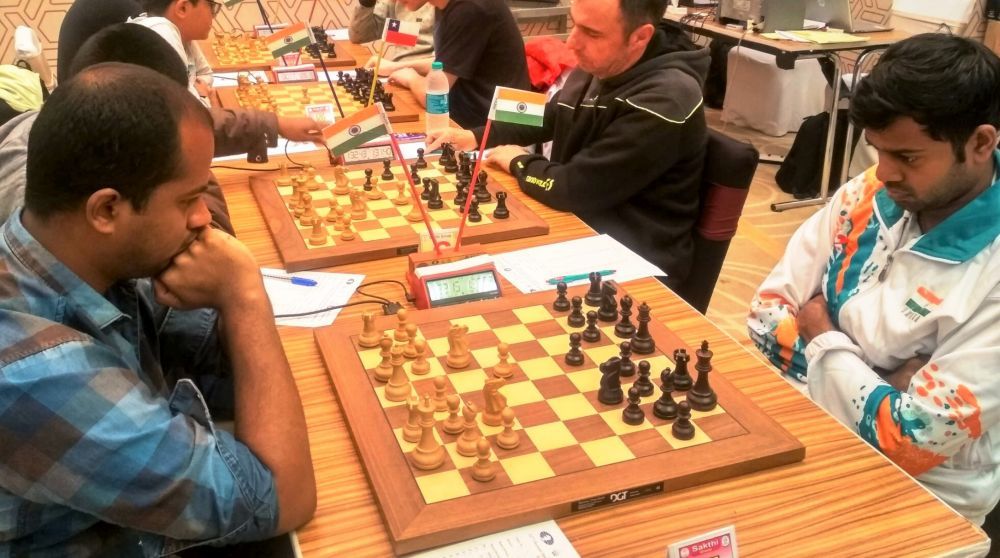 Vishnu is back at the top | Photo: R Anantharam 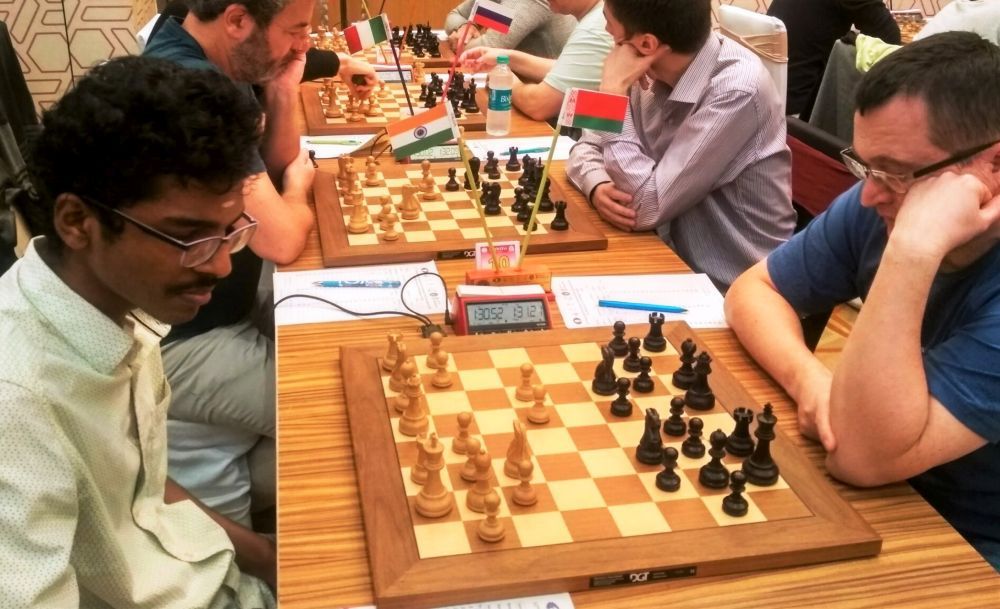 Muthaiah made a solid draw with Alexei | Photo: R Anantharam

IM PDS Girinath (2340) surprised GM Karthik Venkataraman (2479) with the Schliemann variation of Ruy Lopez and Karthik was not able to get into the game. 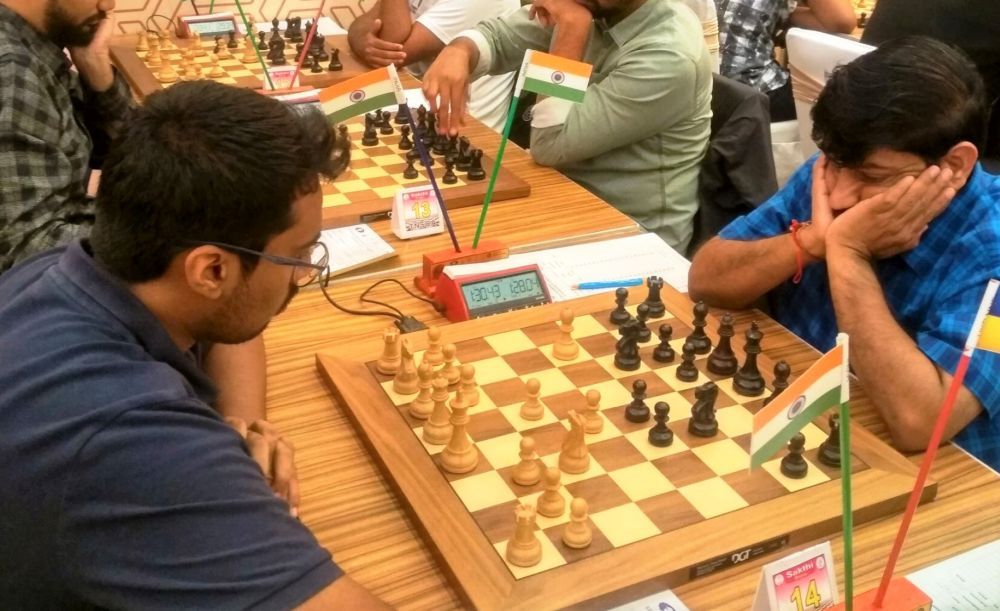 FM Pranesh M (2317) held GM Valeriy Neverov (UKR, 2460) after the liquidated into an opposite color bishop ending in just 31 moves. Another 30 moves were played where draw seemed to be the obvious result. 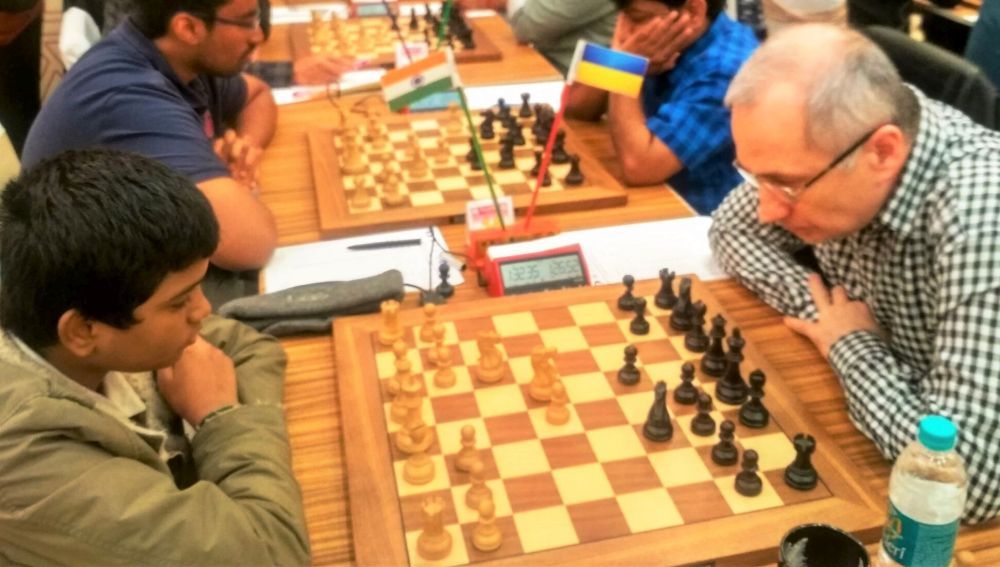 Jubin is still undefeated and well on his way to score an IM-norm | Photo: Niklesh Jain