The South Zone Inter University was held in the second week of October in Chennai. A lot of prominent names like GM Murali Karthikeyan, IM Girish Koushik, IM Antonio Viani D'cunha and others participated in the event. It was won by University of Madras in the Open section and Anna University in the Women's section. International Arbiter R. Anantharaman has sent us a report with all the action, pictures and final standings from this exciting tournament.

The abundance of chess talent in the South Indian Universities was witnessed, when Veltech Dr.RR & Dr. SR University, Avadi, located in the outskirts of Chennai organised the South Zone Inter University Chess Tournament for Men from 12th to 15th October 2016 and Women tournament from 8th to 11th October. The event organised in the home town of five times world champion Vishy Anand had fifty nine teams from Andhra Pradesh, Karnataka, Kerala, Tamil Nadu and Telangana. It was a four days team event of seven rounds.

Former under-16 World Champion and grandmaster Murali Karthikeyan and IM Stany G.A of SRM University, Chennai, former under 10 world champion IM Girish Koushik and the latest IM of India Vianni D’cunha of Vishveshvaraya Technological University, Belgaum, Gireman Ja, a member of the gold medal winning Indian team in under-16 Chess Olympiad 2013 and Akash PC Iyer, a member of the bronze medal winning Indian team in Under 16 Chess Olympiad 2012 of Anna University, Chennai are a few names of worth mentioning in the tournament. Several other state champions also took part in the event. 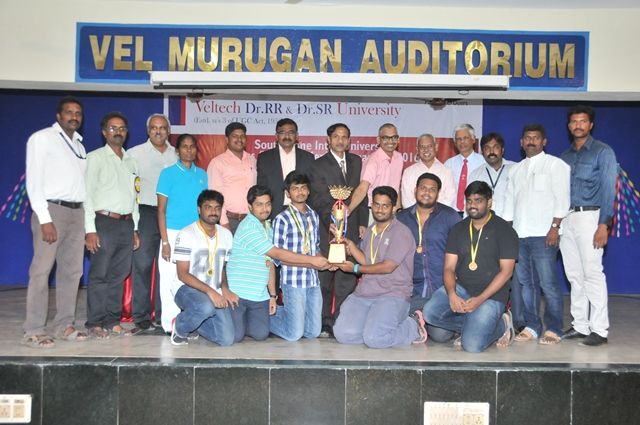 University of Madras won the South Zone Inter University tournament 2016. Guess the man who holds the trophy along with the champions? – none other than grandmaster RB Ramesh who motivated the Indian team to win the bronze medal in Olympiad 2014. Harihara Sudhan, Kumaran B, Senthil Maran K, Yogit S, Vinith I and Vasantha Rubavarman are the team members 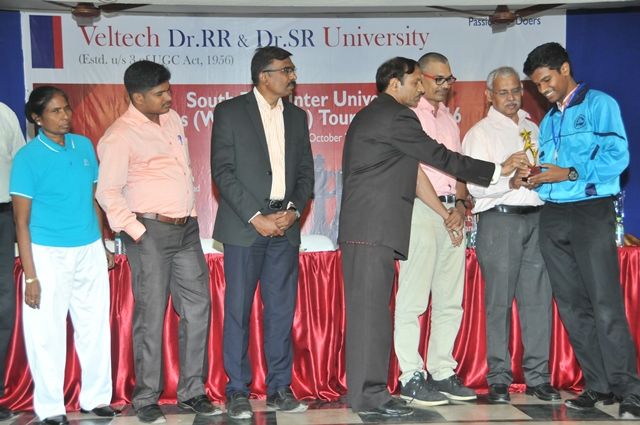 GM Karthikeyan Murali of SRM won the gold medal on Board one and... 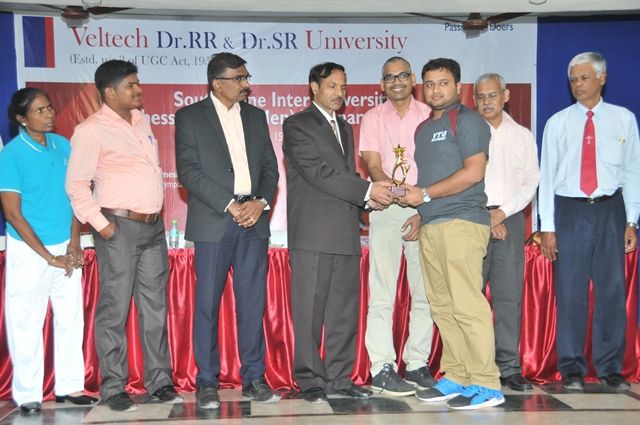 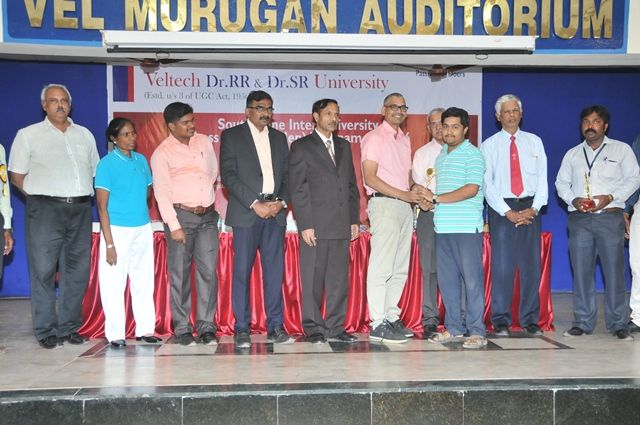 B. Kumaran of Madras won the silver medal on third board 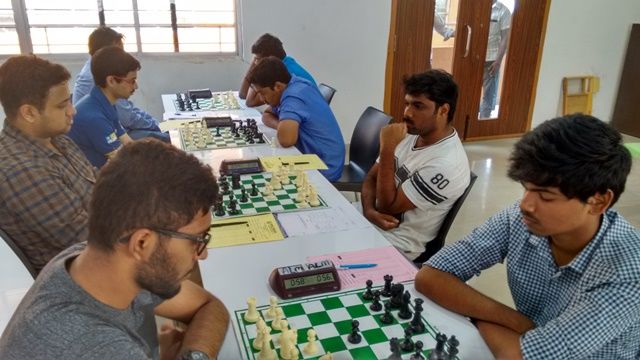 University of Madras vs VTU Belgaum

In the fifth round, the leader Anna was forced to split the point with Madras and VTU joined Anna by recording a 3 – 1 win over Osmania. In the clash against Anna, Antonio Viani D’cunha tilted the result in favour of VTU by beating R. Ganesh and the other games were drawn. VTU led the field with 11 match points after six rounds, followed by Madras, SRM and Calicut Universities.

The summit clash between the top two seeds SRM and VTU was expected to produce a pyrotechnic display as a Diwali special. But, SRM outwitted VTU 3 – 1 and Madras defeated Calicut by 3.5 – 0.5. Both SRM and Madras had 12 match points and Madras won the coveted trophy thanks to their better tiebreak score. 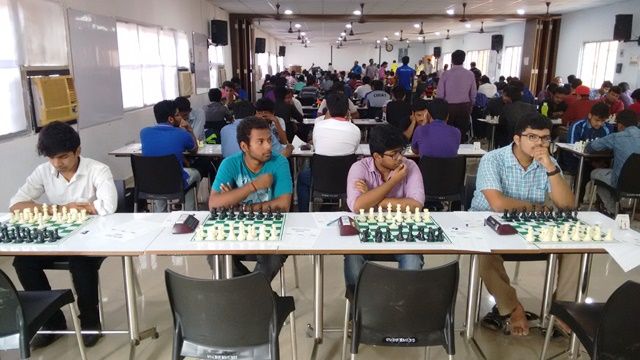 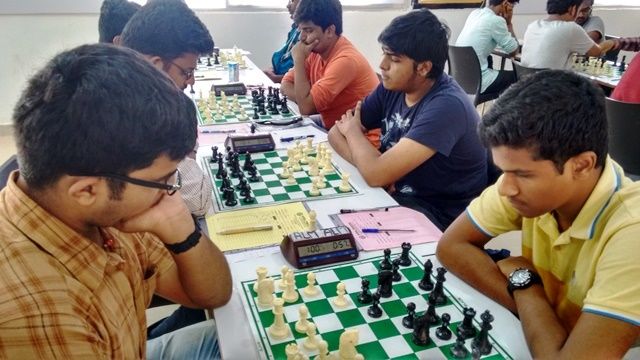 A total of 45 teams participated, and Anna University was the top seed with an average ELO rating of 2169 followed by Madras University with ELO of 2100 and VTU Belgaum with an ELO of 1703. Out of 258 participants, four were Women International Masters and 3 Women FIDE Master.

Elite chess personalities graced the functions. Grandmaster RB Ramesh, Coach of the Indian team for Olympiad was the chief guest and FT. V. Hariharan, Secretary, All India Chess Federation and TN State Chess Association was the guest of honour for the final day.

It is interesting to note that WGM Aarthie Ramaswamy, wife of RB Ramesh was the chief guest for the women tournament’s valedictory function. It was inaugurated by former Asian champion S. Vijayalakshmi, the recent winner of the National Challengers for Women. 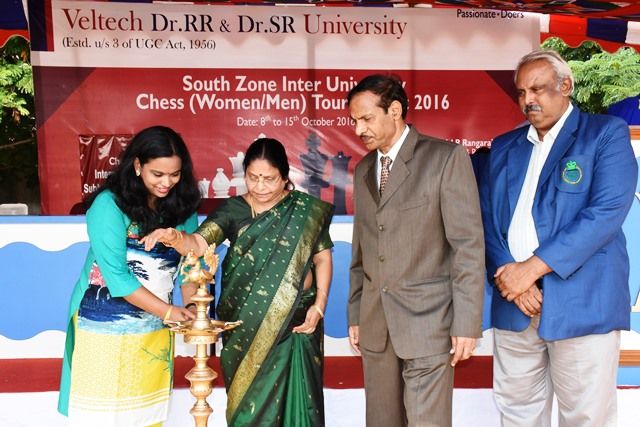 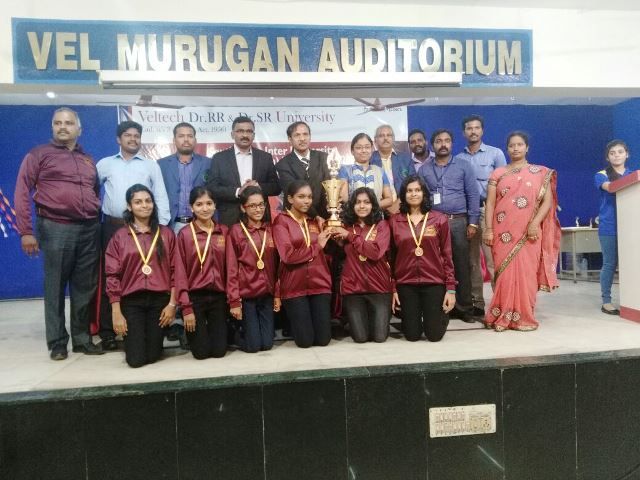 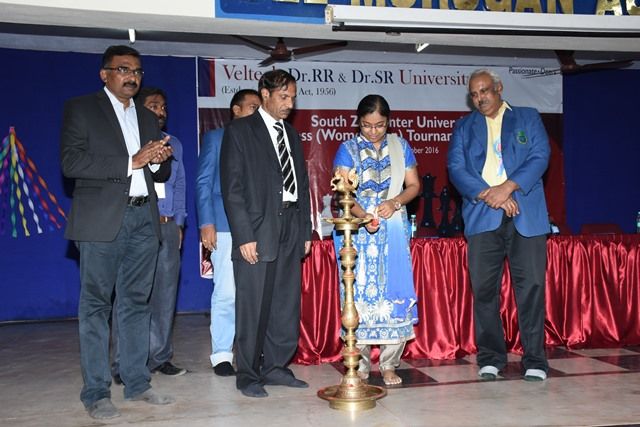 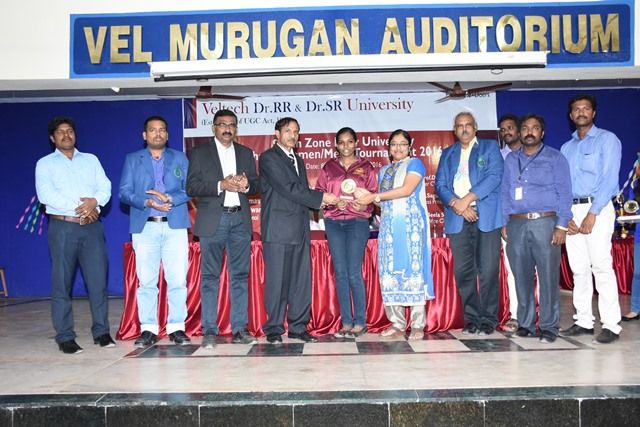 Accredited with A grade by NAAC, Veltech University has supported chess in a big way. The All India Inter Zone Chess Championships are also scheduled here in November. CDIO Worldwide has selected the University as its first member in India. Times of India ranks it as the second best private institution in Chennai. Philanthropists and educationists Dr. Col. Vel Rangarajan Founder President and Dr. Sagunthala Rangarajan evinced keen interest in the organisation of the tournament.

Many prominent players like Murali Karhtikeyan, Girish Koushik, Antonio Viani, B.Kumaran, etc. have submitted their games, with their own analysis for the benefit of the readers. This will follow in a separate report shortly.

Rathinam Anantharam is an A grade international arbiter. He is the