Chess fans in Bhubaneshwar, India and all over the world waited in anticipation for the top board clash between the local boy Debashis Das and leader Hoa Duc Nguyen to begin. The Vietnamese GM, however, had everything under control as he played the Exchange Slav and drew the game in 25 moves, thus winning the title. Second place went to Debashis Das and Diptayan Ghosh finished third. We have a detailed final round report along with pictures from the closing ceremony.

You might have noticed in the headlines that the name of the Vietnamese GM is written differently than usual. That's because after he won the tournament I did some research on Wikipidea and realized that Nguyen in the family name (very common in Vietnam), Hoa is the first name and Duc is the middle name! So, it's Hoa Duc Nguyen who won the 10th KIIT International 2017. 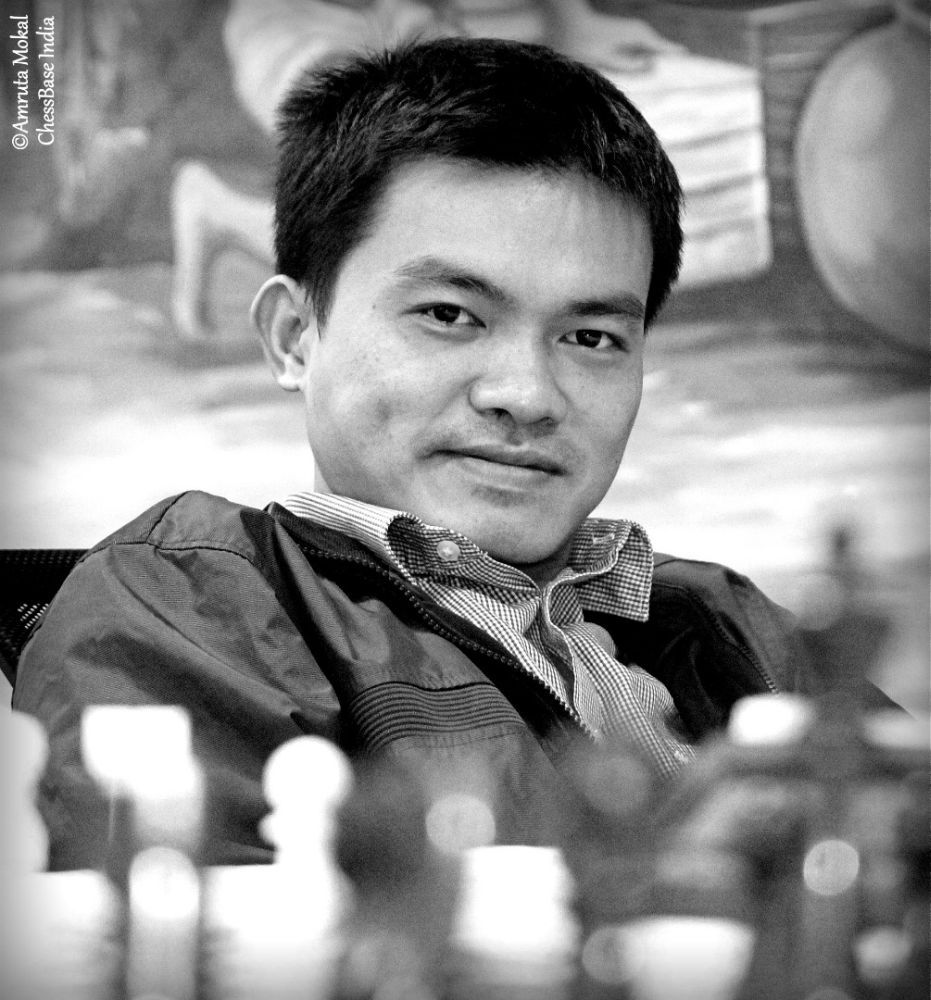 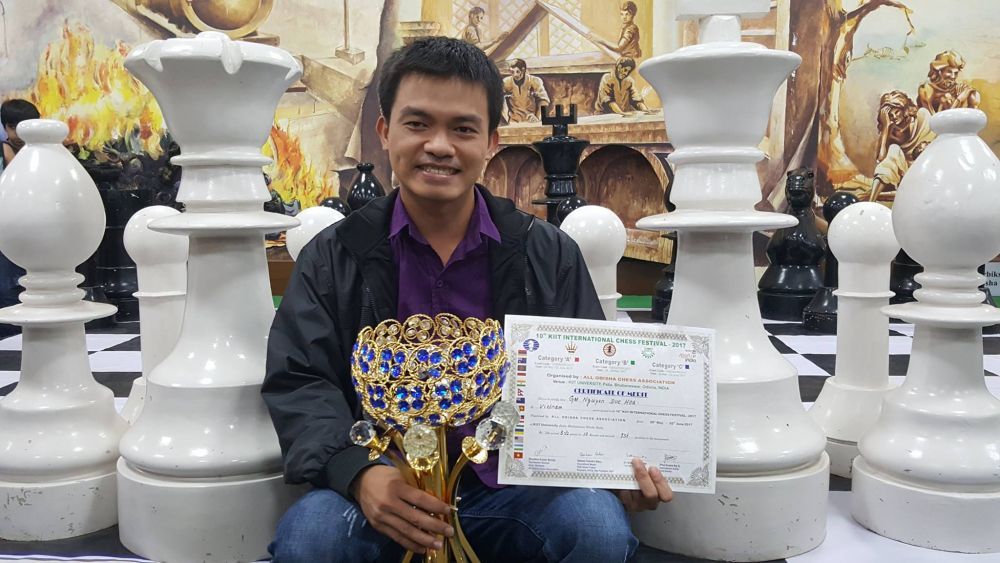 A short chat with Hoa Nguyen

At the prize giving ceremony I approached the winner with a few questions. "No video interview," he said! Why, I asked him? "Individual reasons was his reply. I went ahead and recorded his answers and here is a gist of what the Vietnamese GM said.

On initial round problems:

"I started off the tournament with great difficulties. I lost a really one-sided game in the third round against Vikramjit Singh. At that point I realized that Indians are really good at opening preparation and tactics. So I started to avoid opening theory and in general sharp positions. And once I got my confidence back I relied on healthy opening lines."

"I did play a very sharp line in the penultimate round against S.Nitin. But in that game I was able to guess that my opponent will go for the Qf3 line in the Taimanov system. So I was able to prepare pretty well before the game. Overall it was an easy game for me I think!"

"In the final round I just needed a draw to become a champion. So instead of going 1.e4 I played more solidly with 1.d4. My opponent GM Debashis Das played the Slav defence, and I was happy (laughs) as I could play the exchange variation which was enough for a draw!"

"I hadn't played chess for a year! I just came here to practice and get back my touch! I am really surprised that I won this tournament! (laughs)"

Nguyen's favourite game of the tournament:

If you ask me I think this will be his favourite game for a lifetime! His eighth round encounter with GM Ziaur Rahman. We published this in our round eight report, but the co-ordinated movement of the e2 and d2 pawns is so nice that I would urge you to have a look at this beautiful game again. 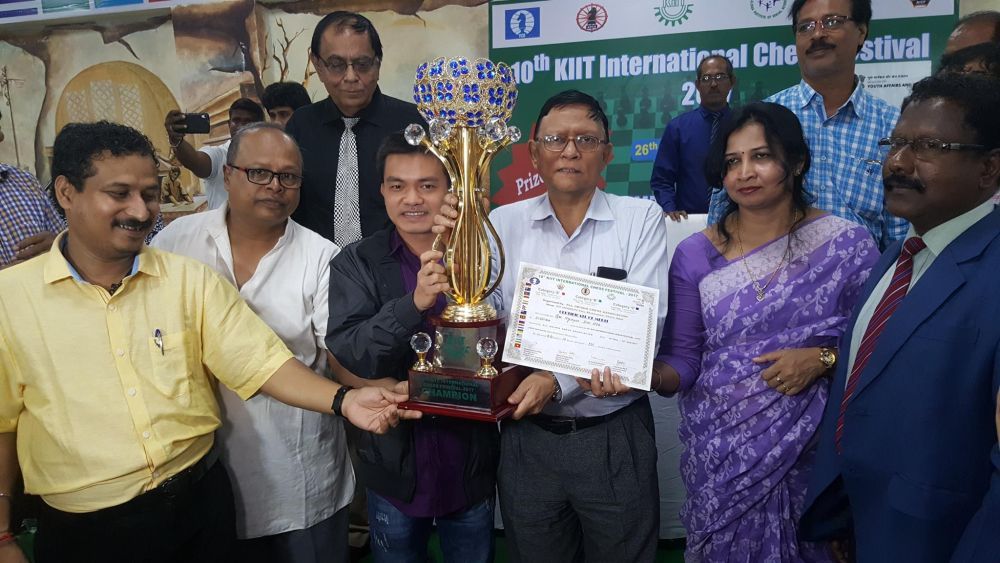 The winner went back with a glittering trophy and the first prize of Rs. 2,00,000. 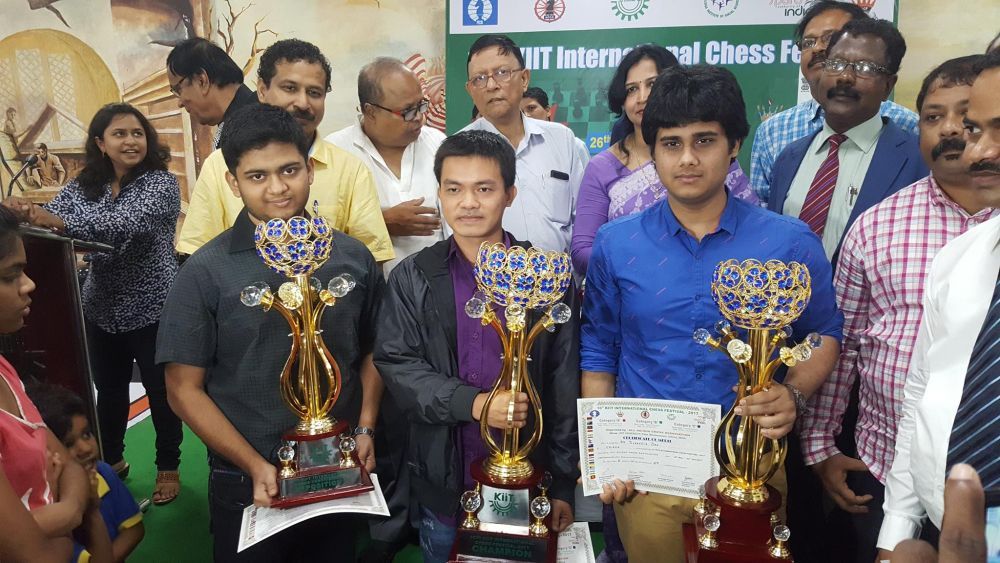 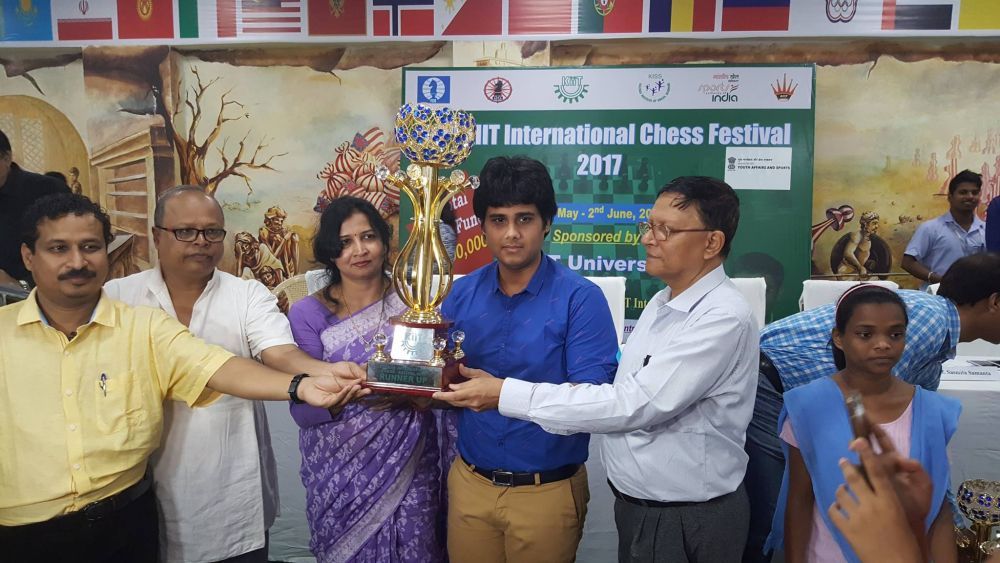 Debashis went back home with a cheque of Rs.1,00,000
There are a few things worth learning from Debashis Das. When asked what he would do with the prize money, the 24 year old said, "I will invest it in my chess, so that I can become a stronger chess player." This is truly a great approach and will ensure that Debashis keeps improving as a chess player. Another thing which impressed me was his discipline. At the dinner table Das abstained from any fried food or cold drinks. "I may exercise less, but I will never eat such stuff. I am a professional chess player after all!" 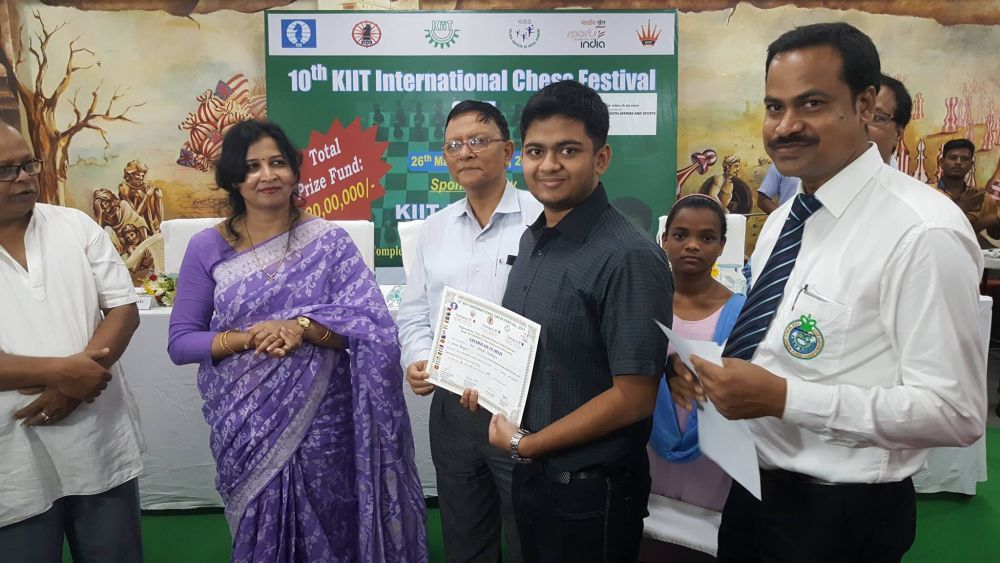 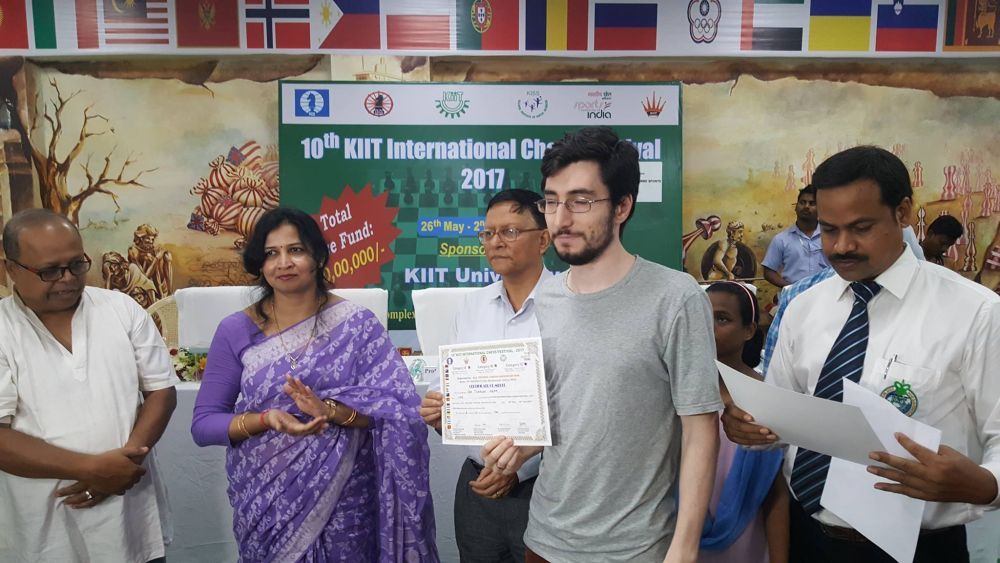 The man who has won two strong Indian opens in the past, Adam Tukahev, had to be content with the fourth spot. But one must definitely commend him for almost always winning his last rounds. Here he beat IM S.Nitin. 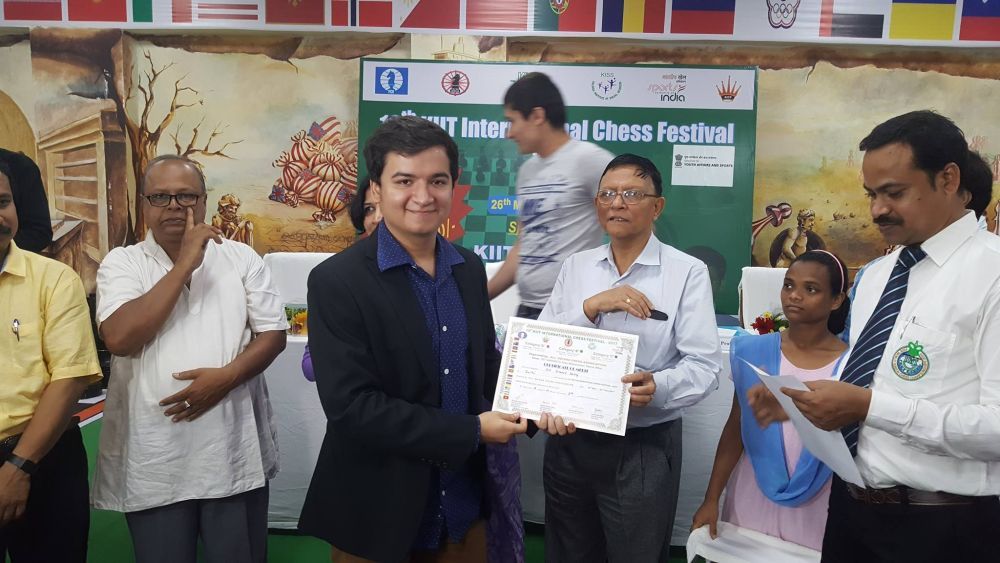 It was as if Sahaj Grover was in two zones during the tournament. The first four rounds where he played poor chess scoring just 2.0/4. And the next six rounds where he scored 6.0/6. Watch out for his games from the Mumbai Open starting tomorrow! He might as well win it with 10.0/10! 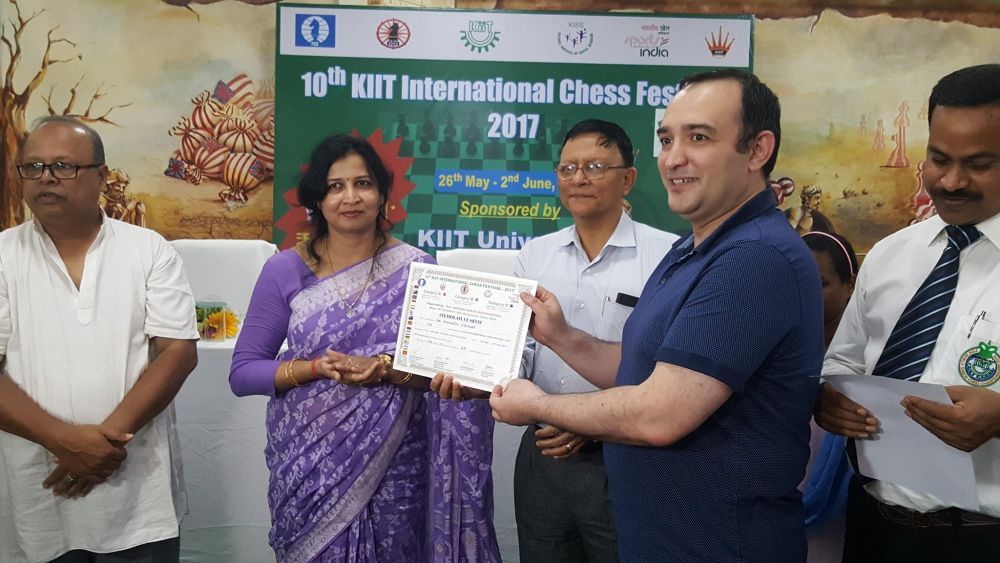 Top seeded Farrukh Amonatov won his last round against IM Ravi Teja and finished sixth. The position that arose in the game was very tricky with Ravi having a bishop and a rook against Farrukh's queen. We have the critical phase of the game in the form of a video. Have a look at how Ravi blunders, Farrukh executes his move and then loosens his body, almost as if to say, the game is over!
Ravi Teja vs Amonatov 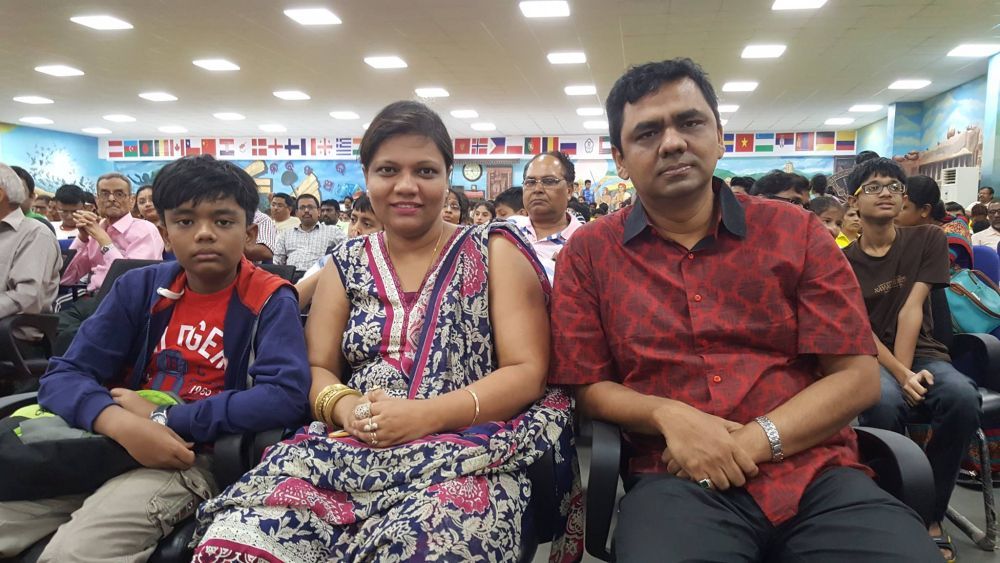 Ziaur Rahman with his family. The Bangladeshi GM drew his last round and finished seventh
The pictures of other prize winners can be found on ChessBase India's Facebook post over here.
The sad part about this event was no norms being made. Somewhere around the seventh round mark things looked so very promising. Players like Nitin, CRG Krishna, Niranjan Navalgund were knocking on the doors of a GM norm, while youngsters like Mrudual Dehankar and Divya Deshmukh were in with a chance for a WIM norm. However, by the end of the tournament everyone faltered and no norms were made. 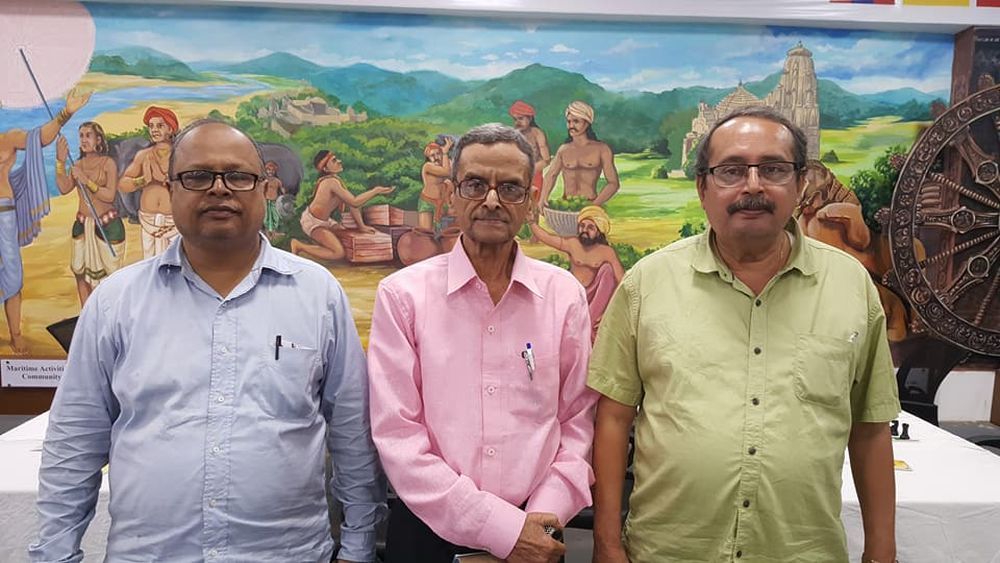 Three legendary players who made a mark on the Indian chess scene at some point in their career: IM Sekhar Sahu, Nasir Ali Syed and IM Ravi Hegde.
Ranjan Mohanty, Satya Ranjan Pattnaik and Gourahari Mohapatra became the three new FIDE Instructors of Odisha. All of them cleared the same examination in the same year. 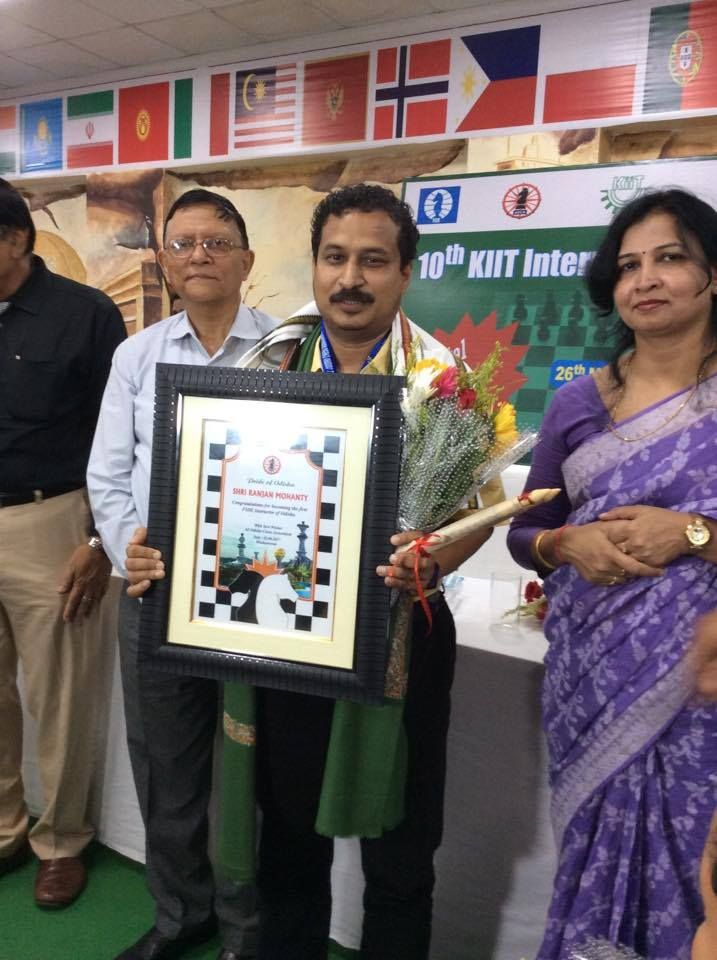 Ranjan Mohanty was the topper in the FIDE Instructor examination. We must mention that Ranjan is an income tax officer and an ardent lover of the game of chess, especially the dragon opening! He is planning to make a comeback to chess in December! So beware! 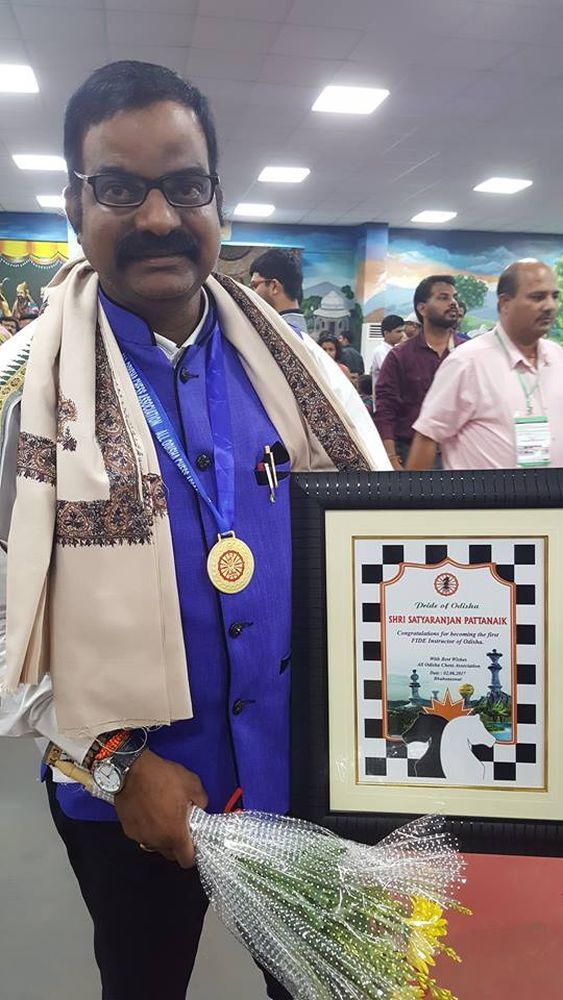 Satya Ranjan Pattanaik is the founder of S.R. Chess centre and all the top players of the state have at some point passed through his academy. 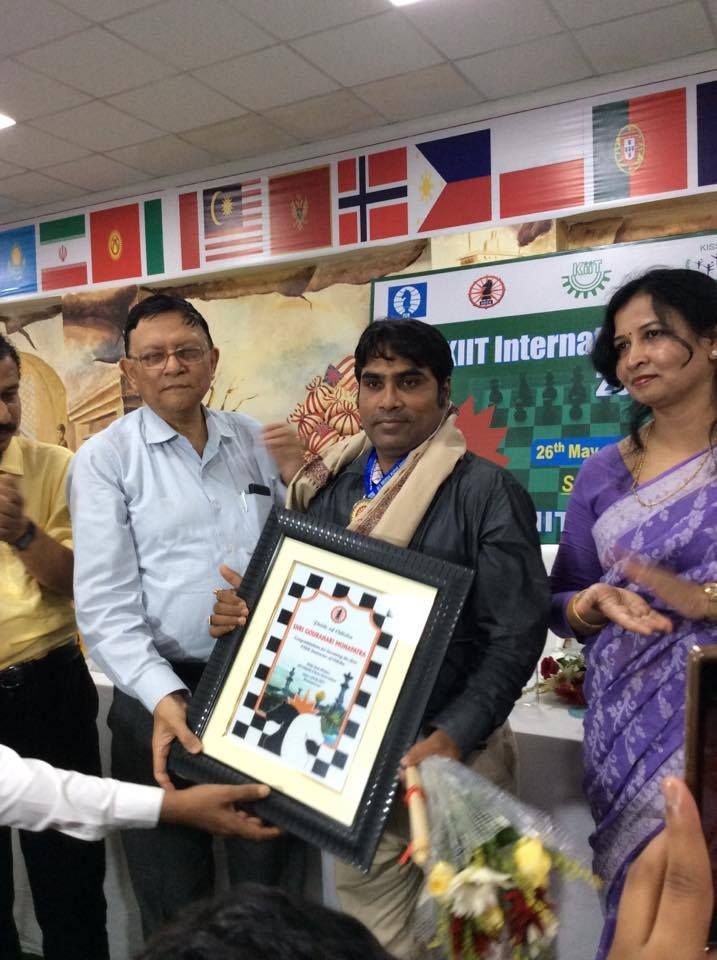 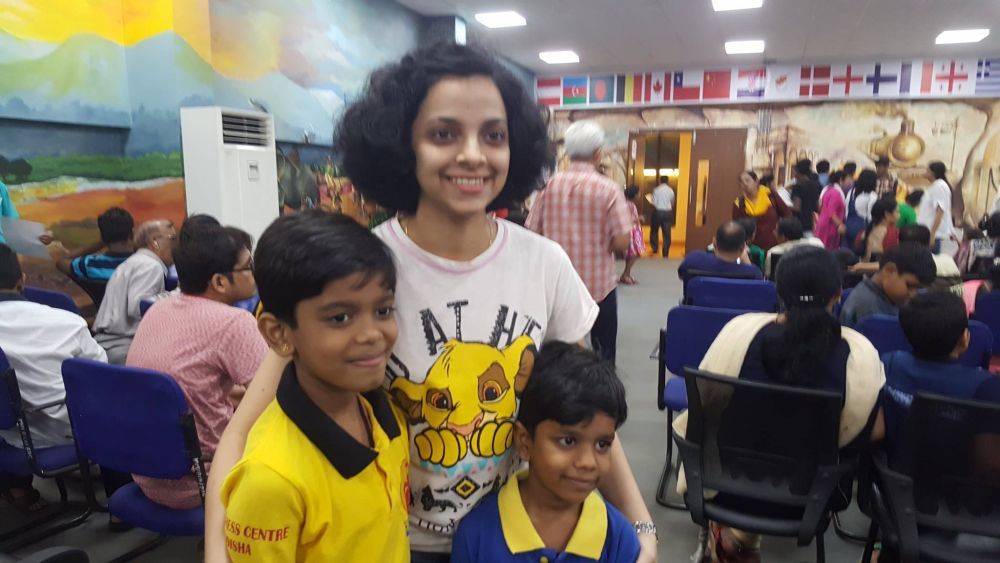 Padmini Rout is one of the most famous personalities of Odisha. I wouldn't be exaggerating if I said that the word chess is synonymous to Padmini in the hearts of the people of the state. Well, I am going to the airport in a few hours and going to see if I can get an upgrade to business class thanks to being her friend! 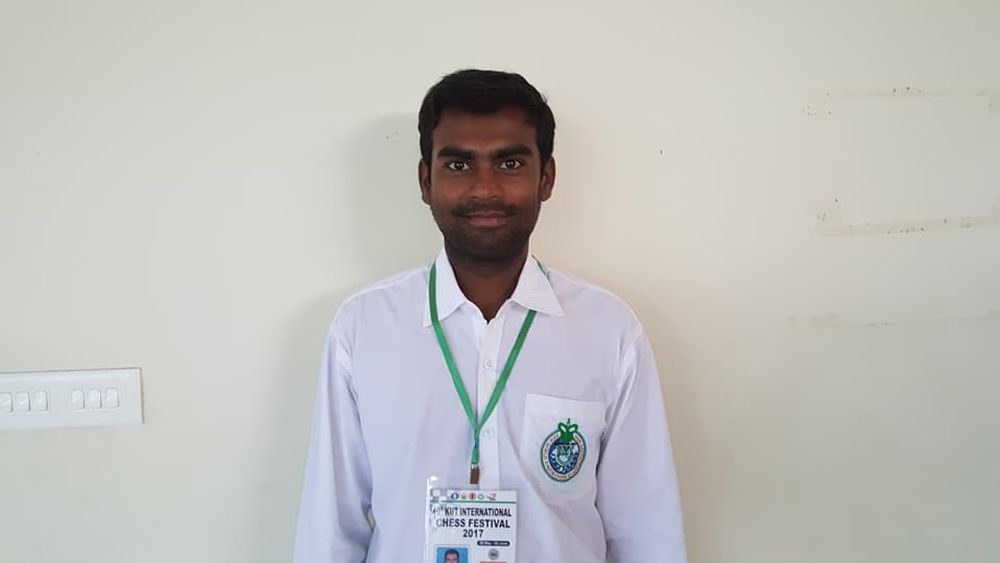 A huge thanks to T. Shyam Sundar for making the live games available for people all over the world to enjoy this high class tournament. 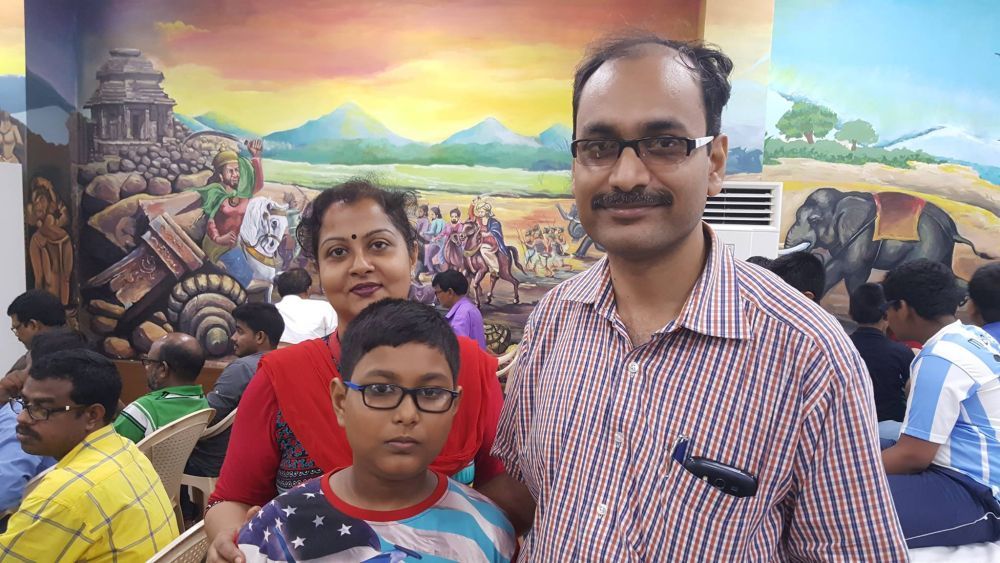 IM Suvrajit Saha with his wife and son. Saha junior played in the C-category, so Suvrajit was there as a chess dad! 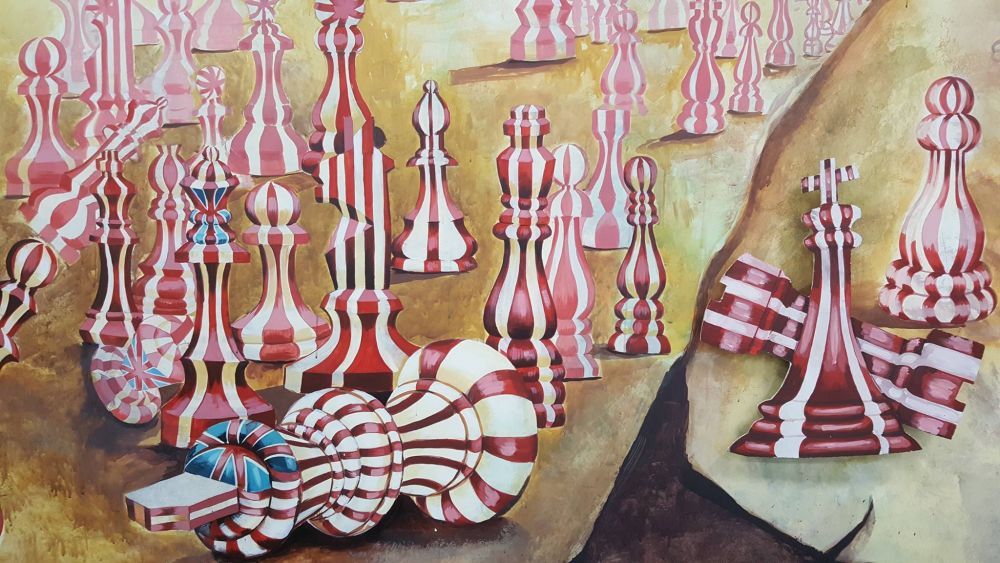 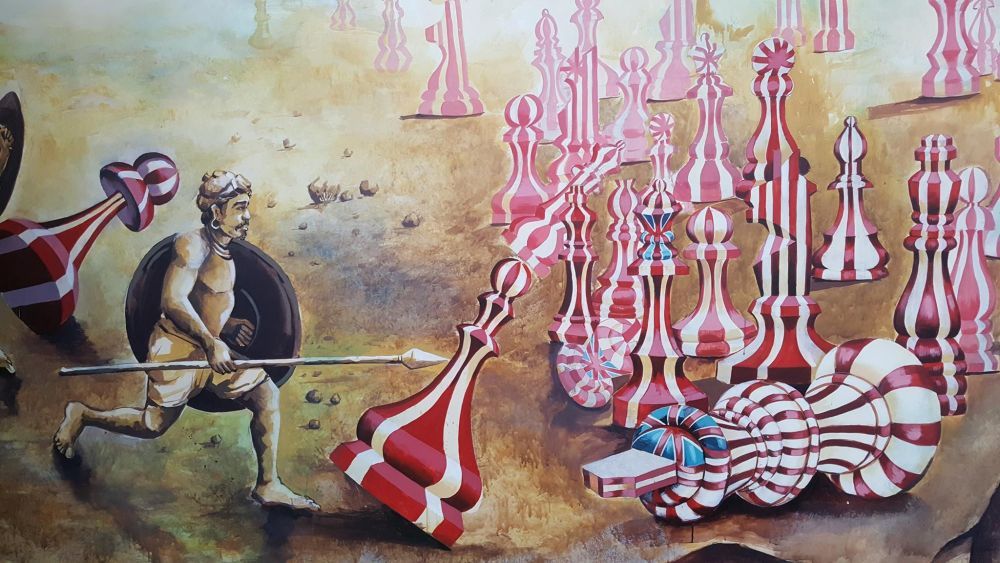 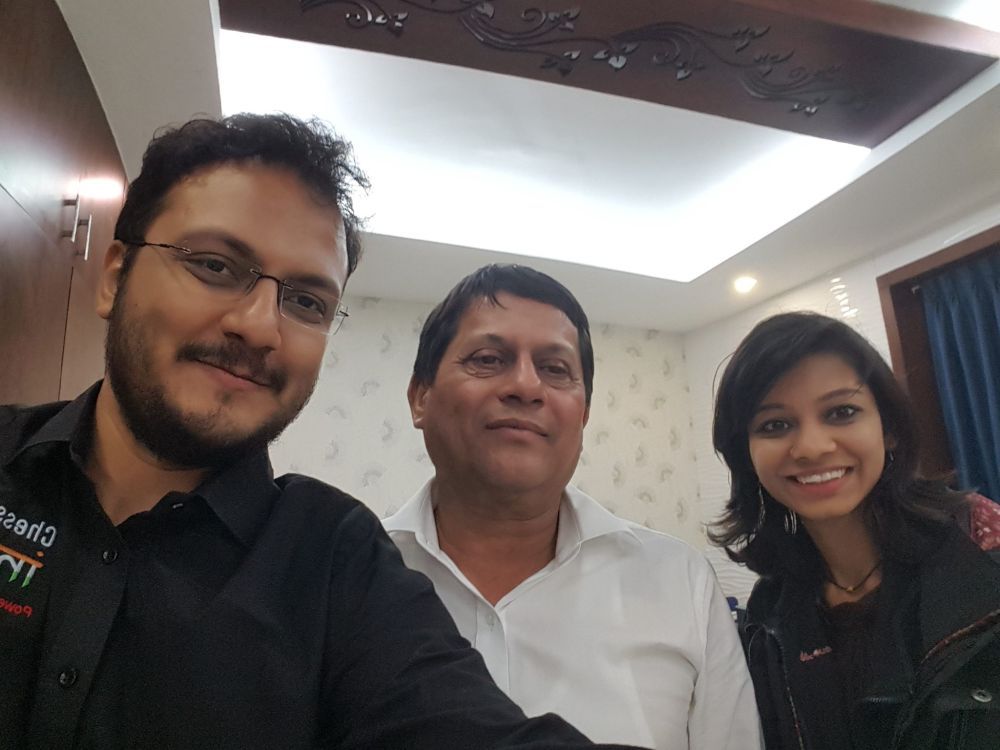 Do you know who this great man is?
He is none other than Achyuta Samanta, the founder of Kalinga Institute of Information Technology and Kalinga Institute of Social Studies. He is one of the greatest social entrepreneurs in the world and ensures that 25000 tribal kids get food each day. ChessBase India was able to interview this great man and we will soon be publishing it. 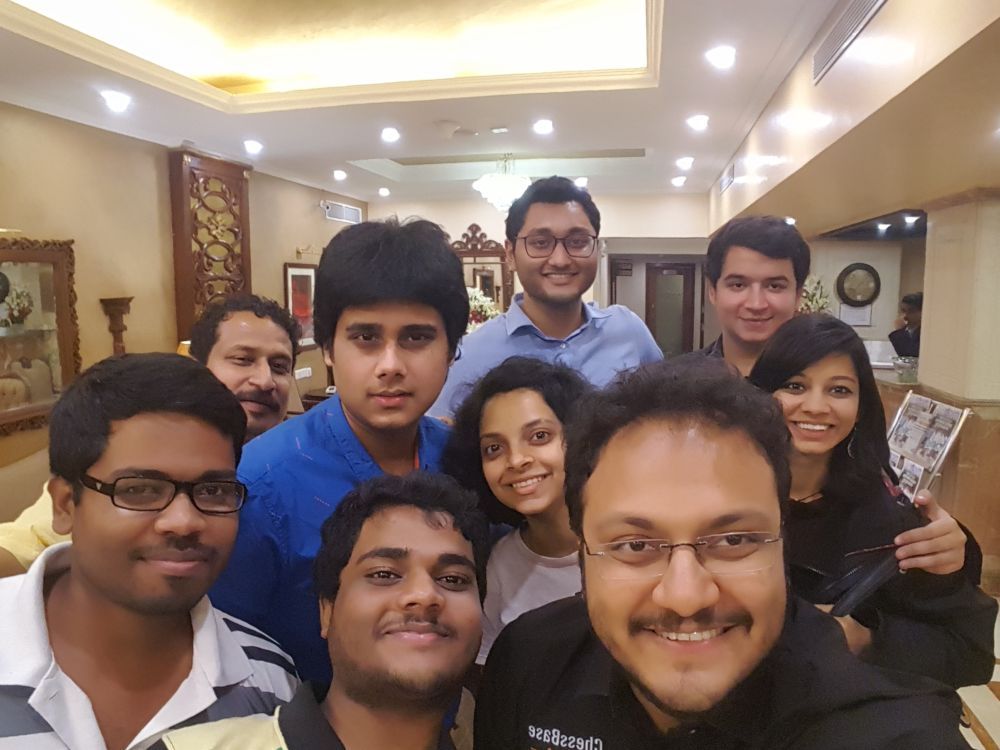 Dinner with friends! Thank you Ranjan Mohanty (man on the extreme left) for your wonderful hospitality. 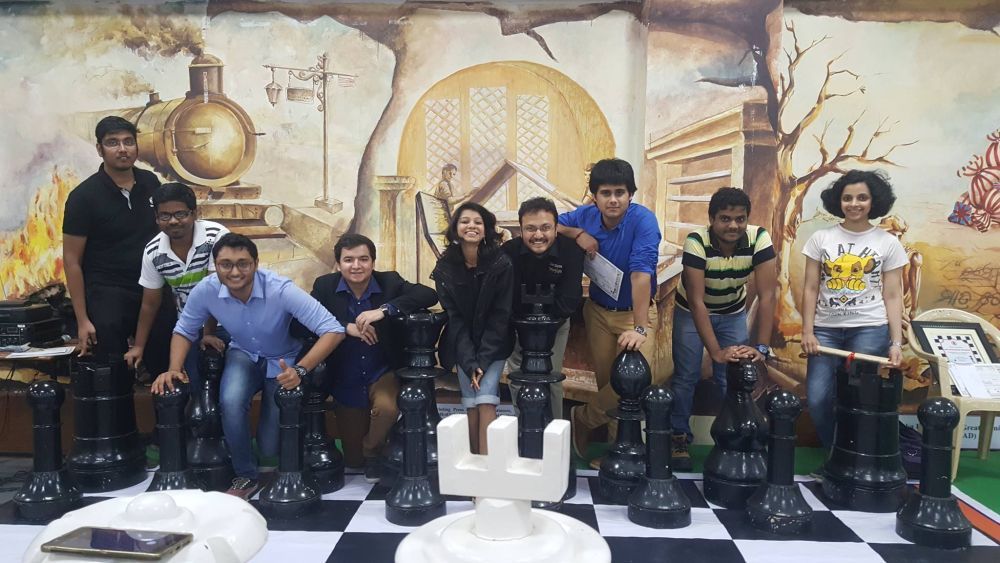 The game of chess binds us all!

05+06: The story of two brilliant combinations

07: All rook endgames are drawn

09: Can the local boy stop the Vietnamese force