Until three rounds top seed Farrukh Amonatov looked unbeatable. He was playing some great chess. However, in the fourth round he found his match in CRG Krishna. The Indian IM played a superb game, without any errors to hand the Tajik GM his first defeat in India after a long time! We have the annotated game along with video interviews with not only Krishna but also Diptayan Ghosh. Five players now lead with 100% score. Illustrated report. 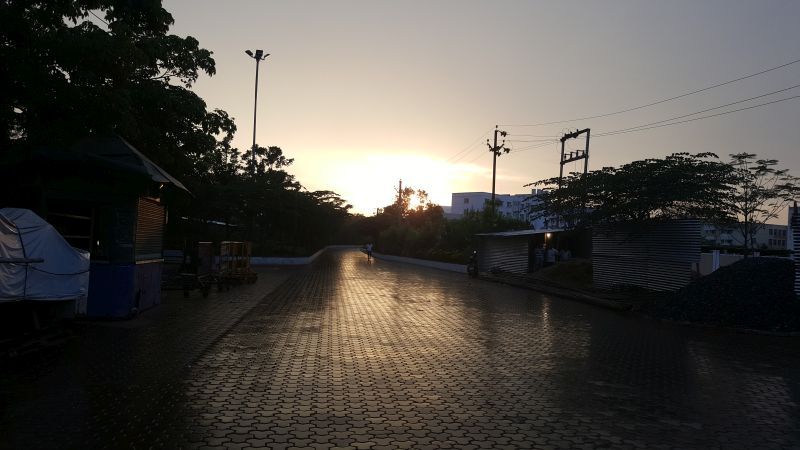 The storm clouds had gathered as it began to drizzle in Bhubaneshwar. But this was nothing compared to the battles that took place over the board! 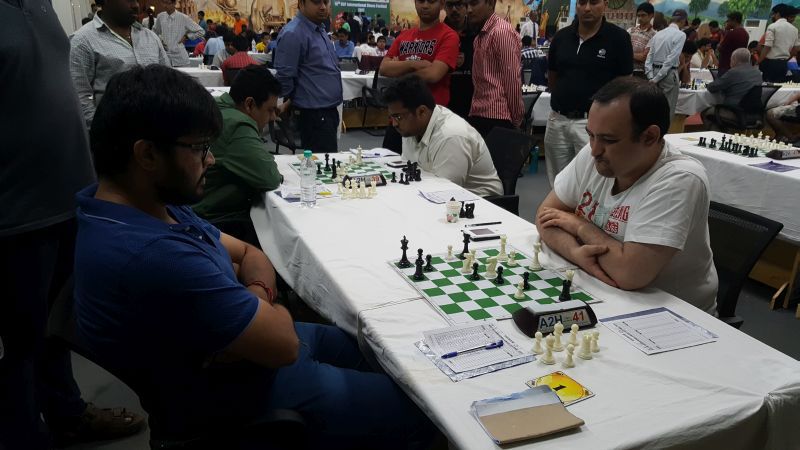 The main action took place on board one where CRG Krishna was pitted against the top seed Farrukh Amonatov
CRG Krishna is a great exponent of the French Defence. He played the opening in great style and landed in a better position. He kept making accurate moves and was able to beat his higher rated opponent in style. This was the highest rated player that CRG has beaten in his chess career till date. 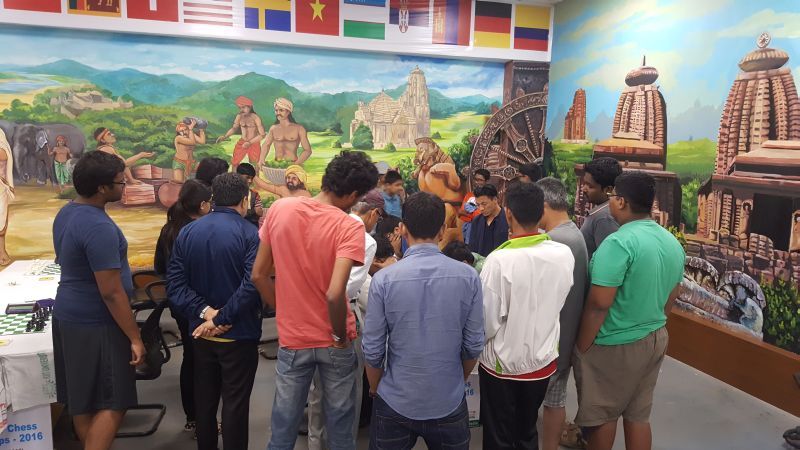 Huge crowd gathered on board one to not miss the action! 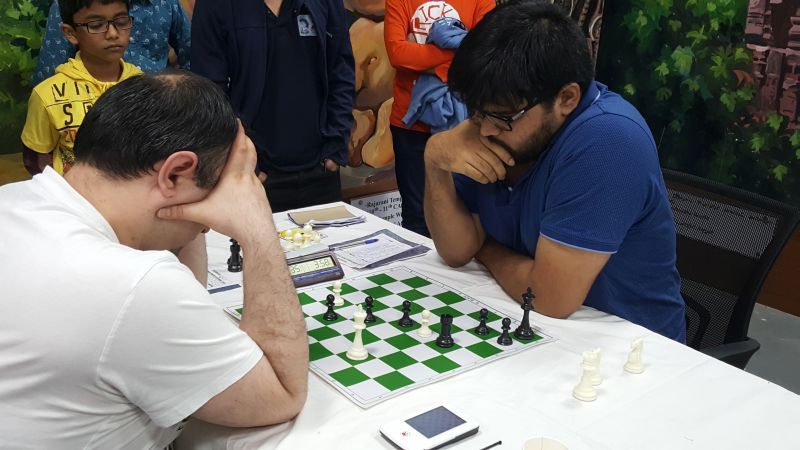 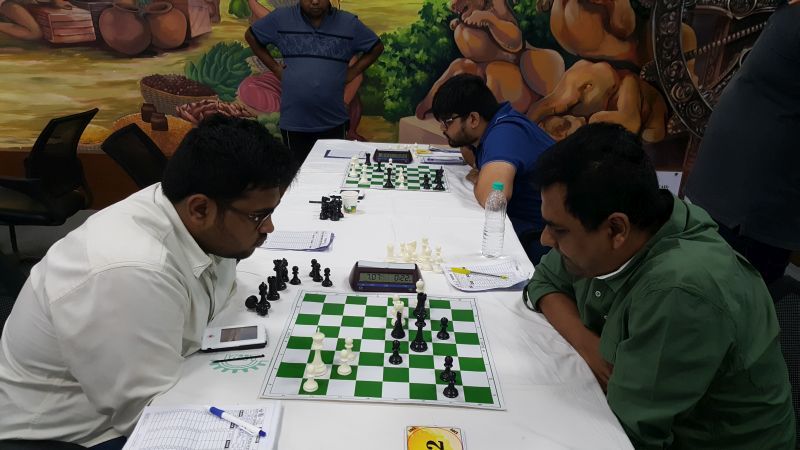 Ziaur Rahman was able to outplay Chakravarthi Reddy on board two 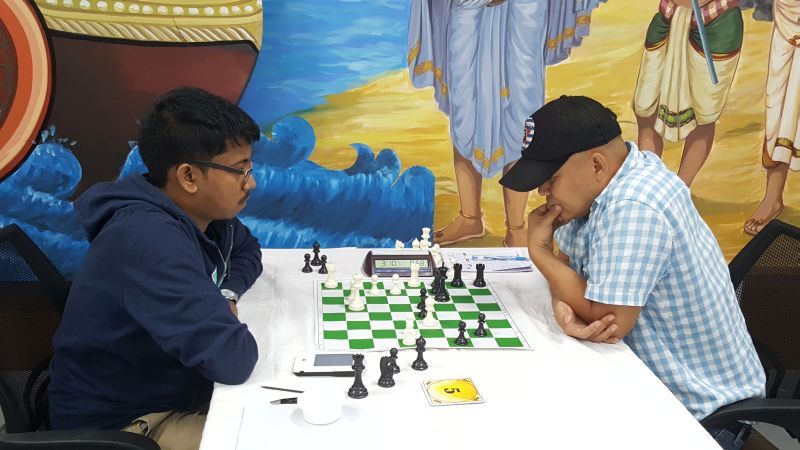 Sayantan Das on his way to victory against Vikramjit Singh

Facebook Live video done during the fourth round. The clarity might not be the best but it gives you a good idea of what it is like to play at the KIIT Open.

Check out the complete list of rankings after round four 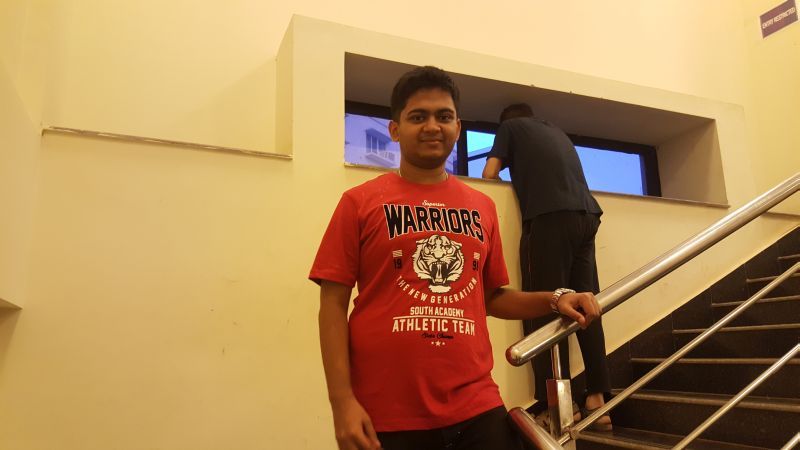 Second seed of the event Diptayan Ghosh scored a win over Rajesh Nayak and moved to 3.5/4

The thing which has always impressed me about Diptayan is the ease with which he keeps climbing up the Elo ladder. He now has a rating of 2569. I caught up with him after the game and asked him a few questions which you can find in the video below. Diptayan talks about the pawn endgame swindle in round two, and about the young and upcoming talent D. Gukesh (he will be a GM very soon!), how he manages to keep increasing his rating and what are his future plans and tournaments.

A short interview with Diptayan Ghosh 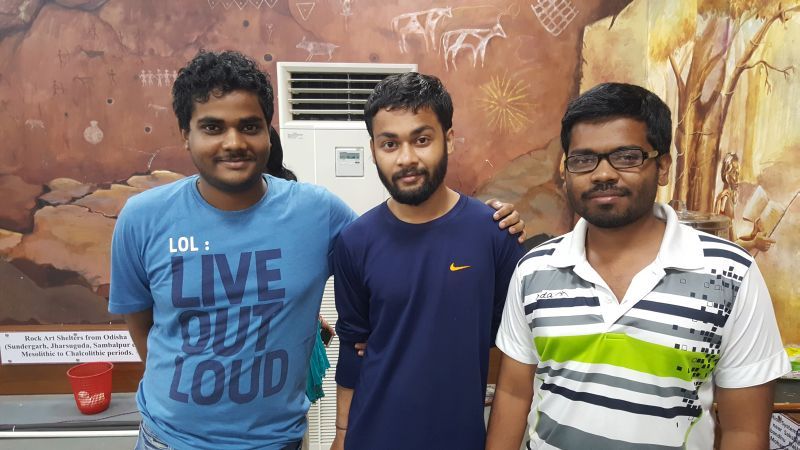 The rising stars of Orissa: Sidhant Mohapatra, who is on 3.5/4 and beat Mohammad Fahad, Rajesh Nayak (centre), who on his way to 3.0/4 beat IM Rajesh VAV and Mitrabha Guha, and Utkal Sahoo (right), who lost to Laxman today but had beaten Debashis Das yesterday. 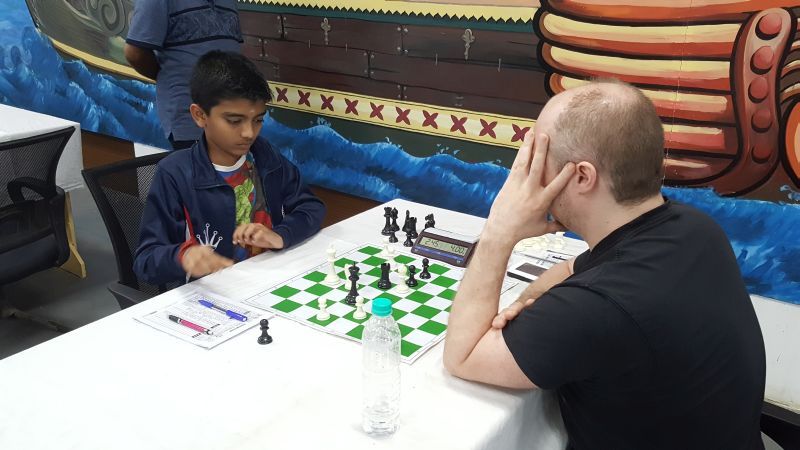 A game filled with lots of ups and downs. Gukesh had a poor position out of the opening and then maanged to somehow equalize. Deviatkin made a few errors, but it was the young boy who made the last one and hence lost the game. 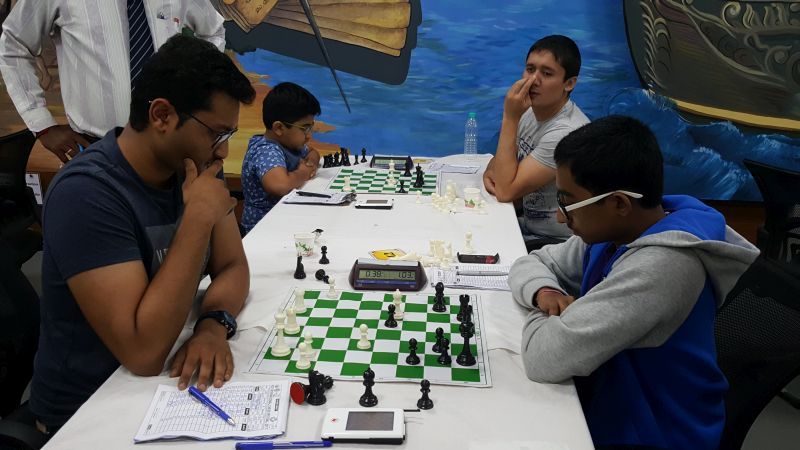 IM K.S. Raghunandan (right) blundered an entire piece in a position where he was a pawn up and lost to Fenil Shah. Fenil is playing competitive chess after quite some time and a score of 3.5/4 is very impressive. 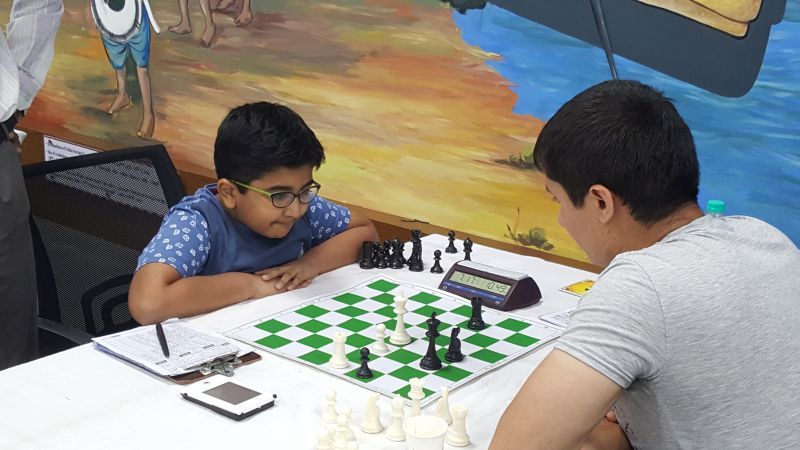 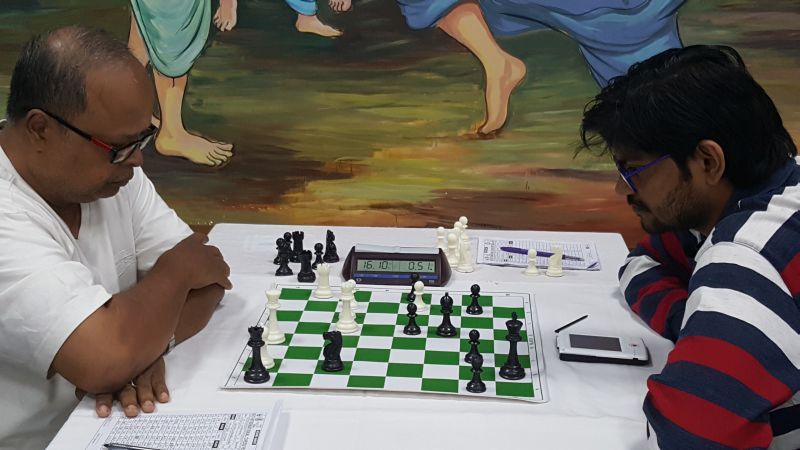 Look at the clock! It was Niranjan Navalgund who was under pressure, but it was Sekhar Sahu who blundered and gave the full point to Niranjan. We are hoping that Niranjan makes another GM norm and treats us to something like this! 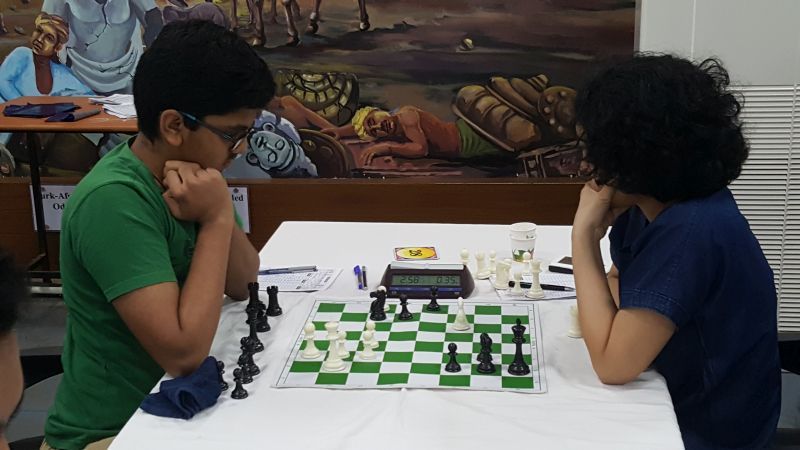 Padmini Rout's woes at this event continue. Today she lost to Avdhoot Lendhe (2080). 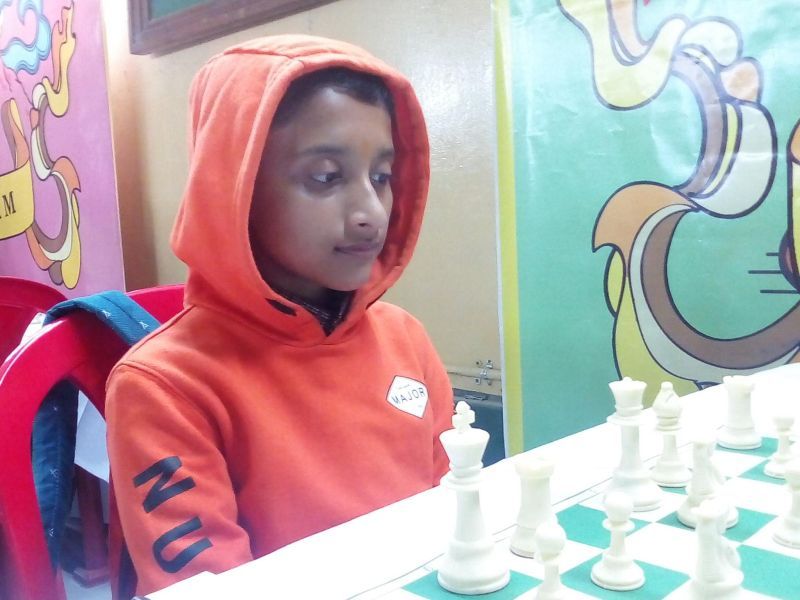 A special mention must be made about the talent from Assam Shahil Dey. He scored 2.5 points in the first three rounds against players rated 400 points above him! He is already gaining 86 Elo points from the event in spite of losing the fourth round. 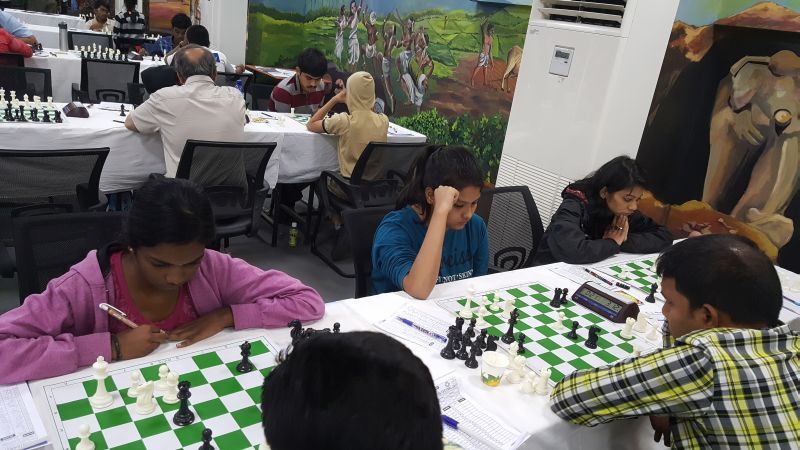 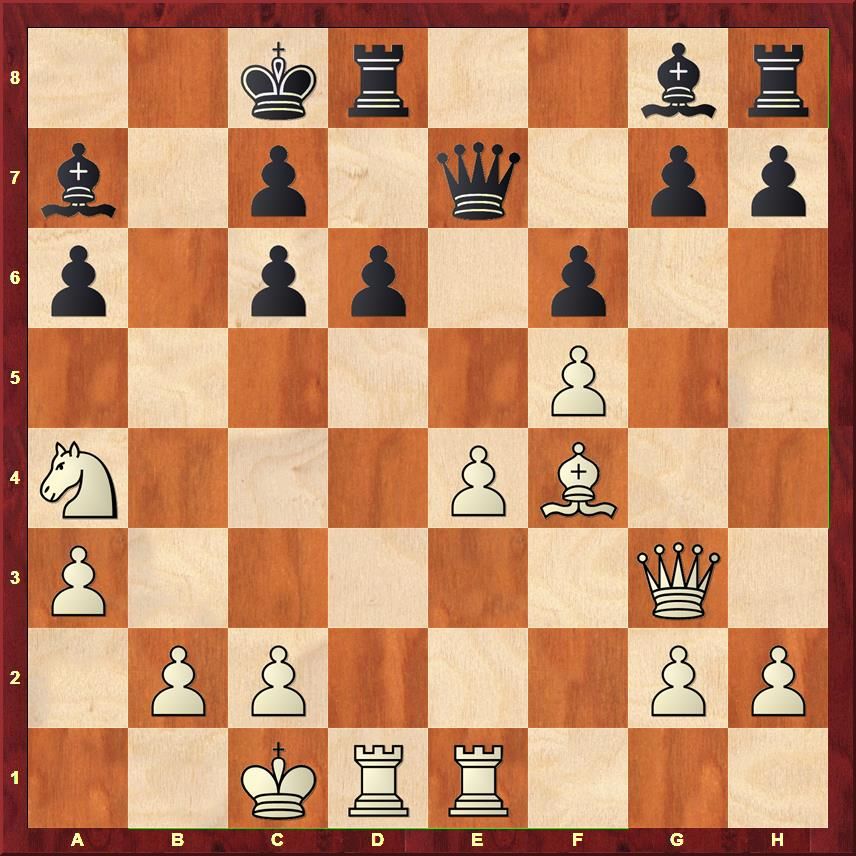 White to play
Normal moves like Qc3 or Be3 are definitely possible, but White has a killer blow. And it shouldn't come as a surprise because he is so well developed. So the key idea is 1.e5!! Now fxe5 loses pretty simply to Bg5! Hence Black must choose 1...dxe5. White now has... 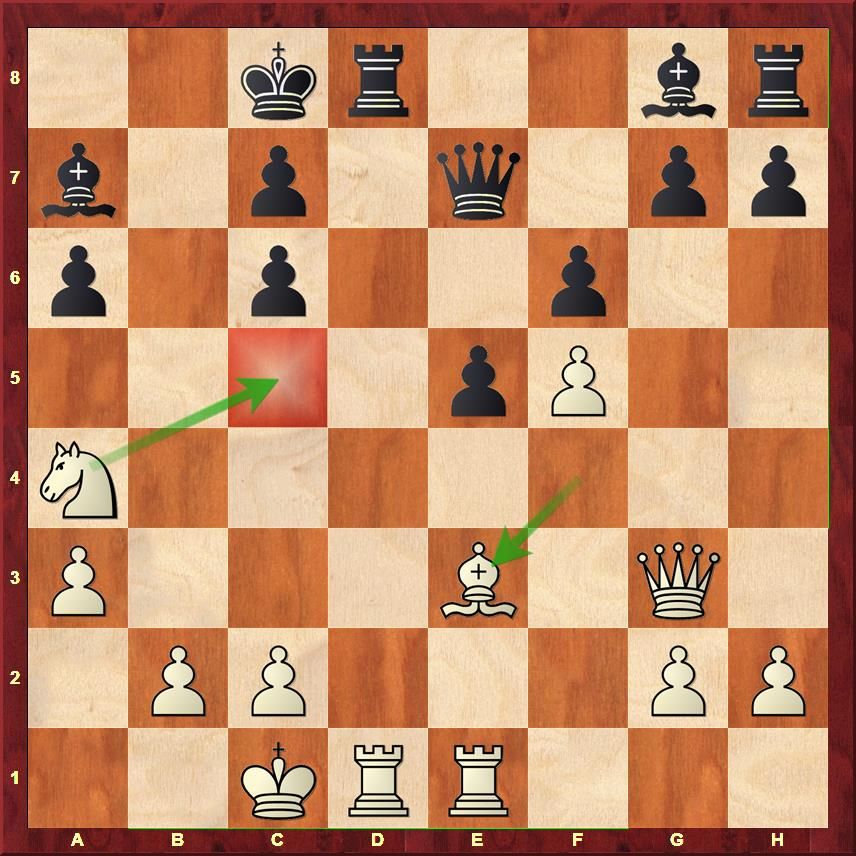 ... the powerful move 2.Be3! This backward move is easy to miss. But once you see it you realize how powerful it is. The idea is to just exchange the dark squared bishop and utilize the c5 square for the knight after which is the game is almost over! In words of Jacob Aagaard what White did was Revolution (e5!) and followed it up with evolution (Be3!). I think the idea was pretty cool and unusual.

You can also download games from the link given above.