World Juniors Rd.01: Dvorkovich visit and a tough start for the top seeds

The World Junior Championships 2019 began with great excitement on the 15th of October 2019 in New Delhi, India. FIDE President Arkady Dvorkovich visited the event and boosted the spirit of the participants. This is the second big event happening in India in the month of October after the successful completion of the World Youth Championships 2019. It is perhaps for the first time in the history that the number of male participants in the open section is exactly equal to the number of female participants in the girls section - 94 each! In the first round both the top seeds - Amin Tabatabaei (2642) and Zhu Jiner (2507) were held to a draw. We bring you detailed coverage from the venue in New Delhi.

"You can predict everything, but you cannot predict the Delhi traffic", these were the words of Bharat Singh Chauhan at the inauguration ceremony of the World Juniors 2019. Why did he say so? Well, because FIDE President Arkady Dvorkovich who was scheduled to arrive for the opening ceremony at 2.30 p.m. was delayed by nearly an hour. But when Dvorkovich arrived at the venue, you could see the spring in his step and the intensity to get things done faster. The players were waiting for him, the round had to start at 3 p.m. and he didn't want to keep them waiting anymore. 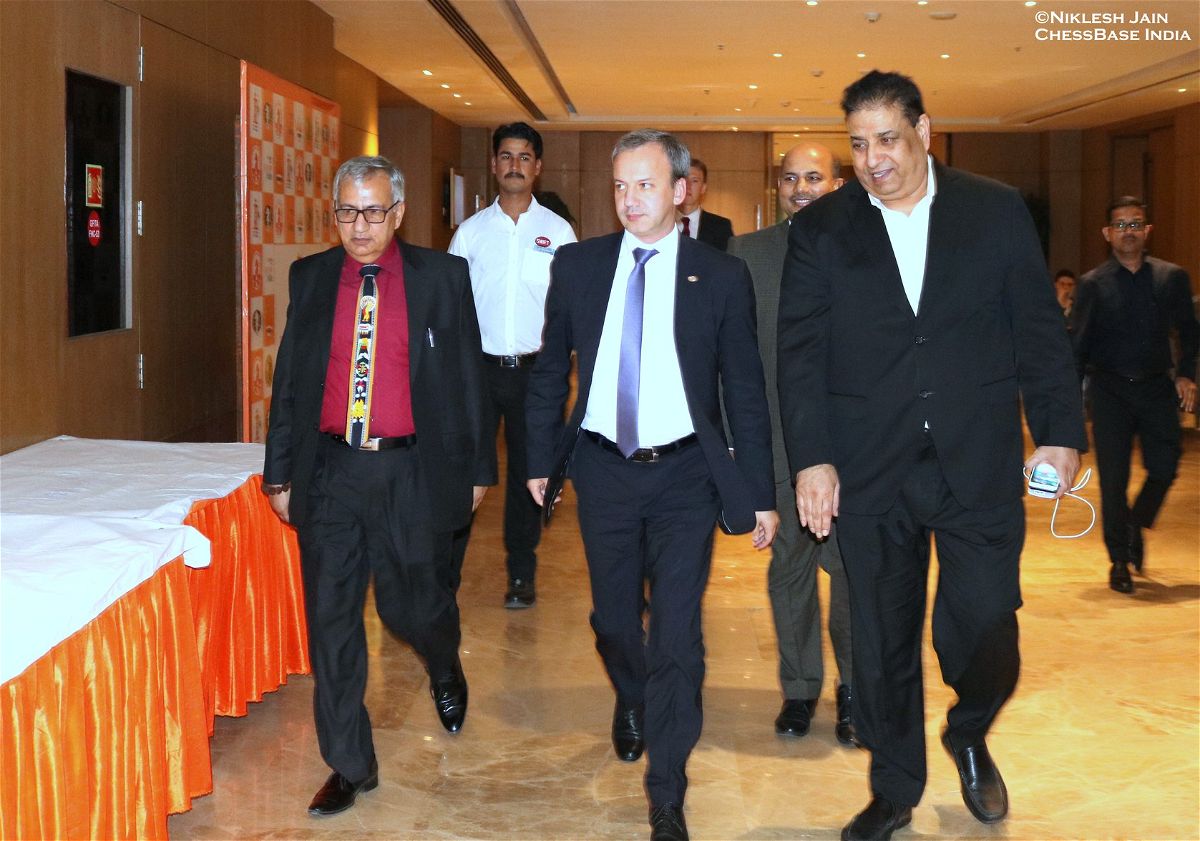 Speaking to gathering, Dvorkovich said, "If zero tolerance rule would be applied to chess politicians, I would have been suspended already!" Dvorkovich's speech was crisp and short and dealt with how FIDE is trying its best to be as transparent as possible and to change the face of the chess world. 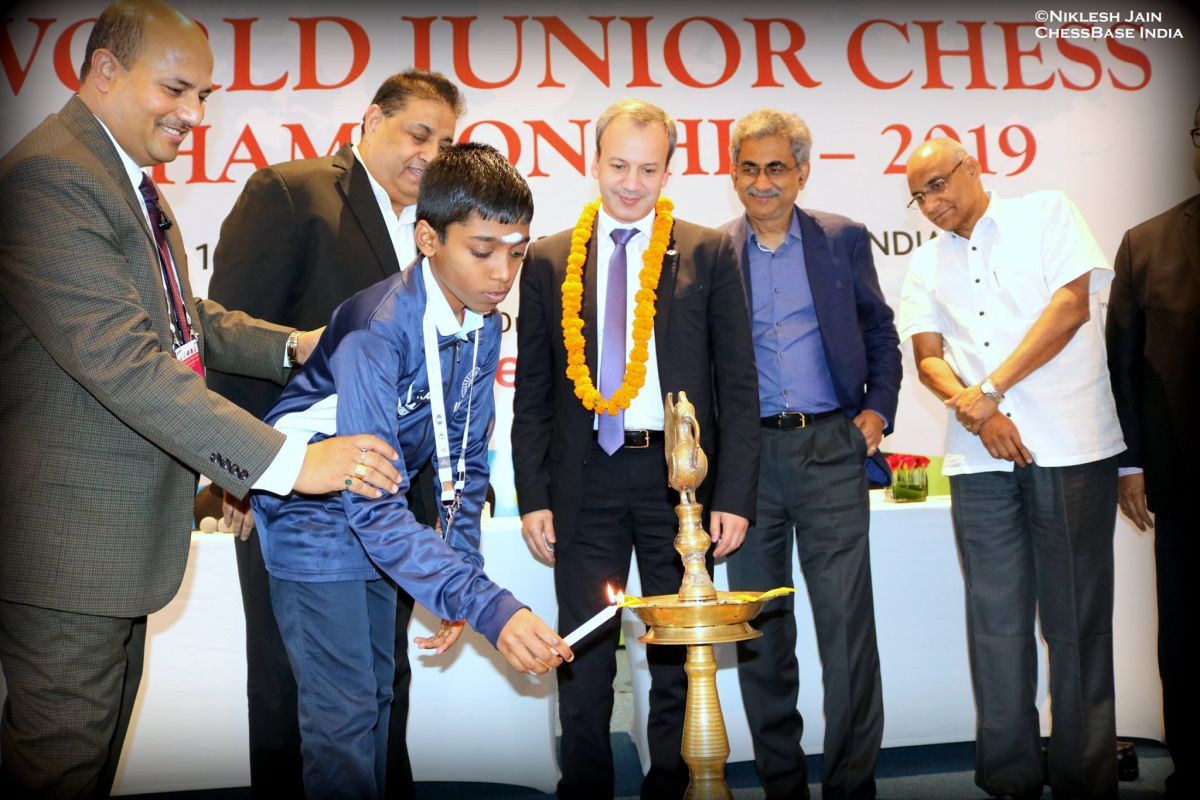 World under-18 champion R. Praggnanandhaa lights the traditional lamp, which is usually done in India for an auspicious beginning | Photo: Niklesh Jain 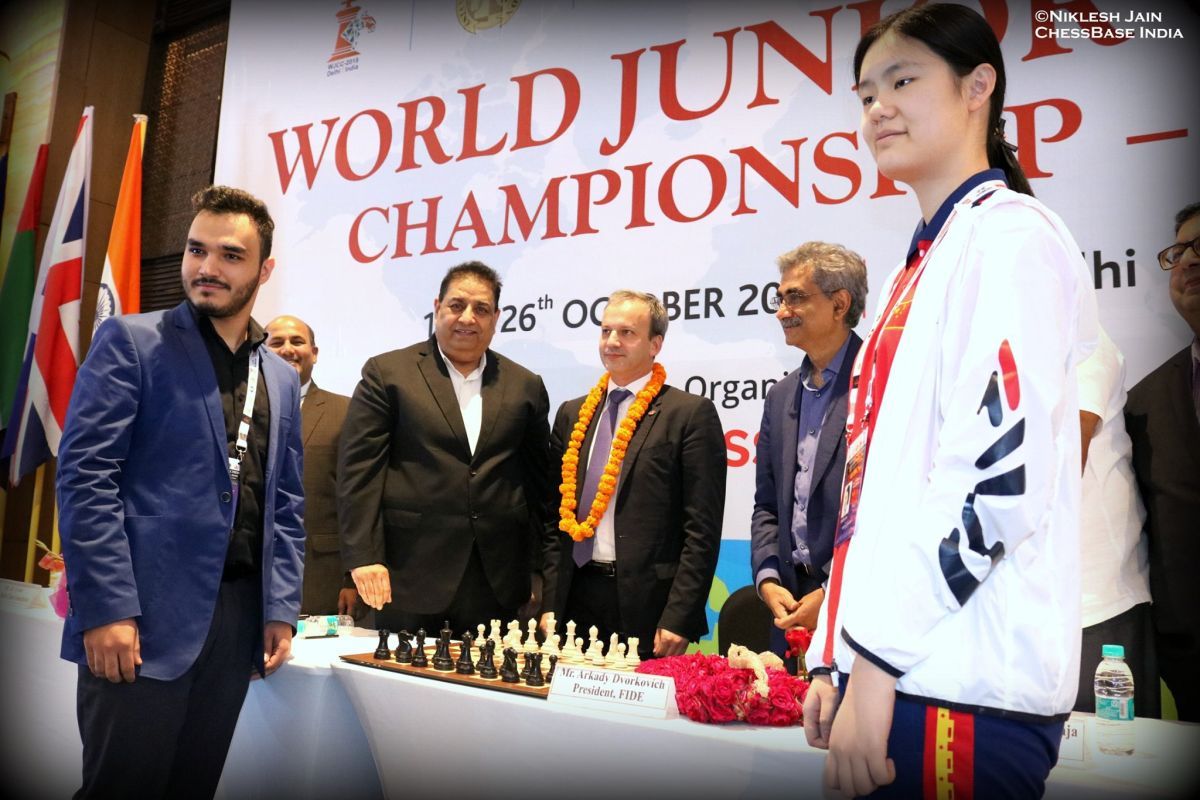 The tournament was opened with the top seeds of the event Amin Tabatabaei in open and Zhu Jiner in girls | Photo: Niklesh Jain 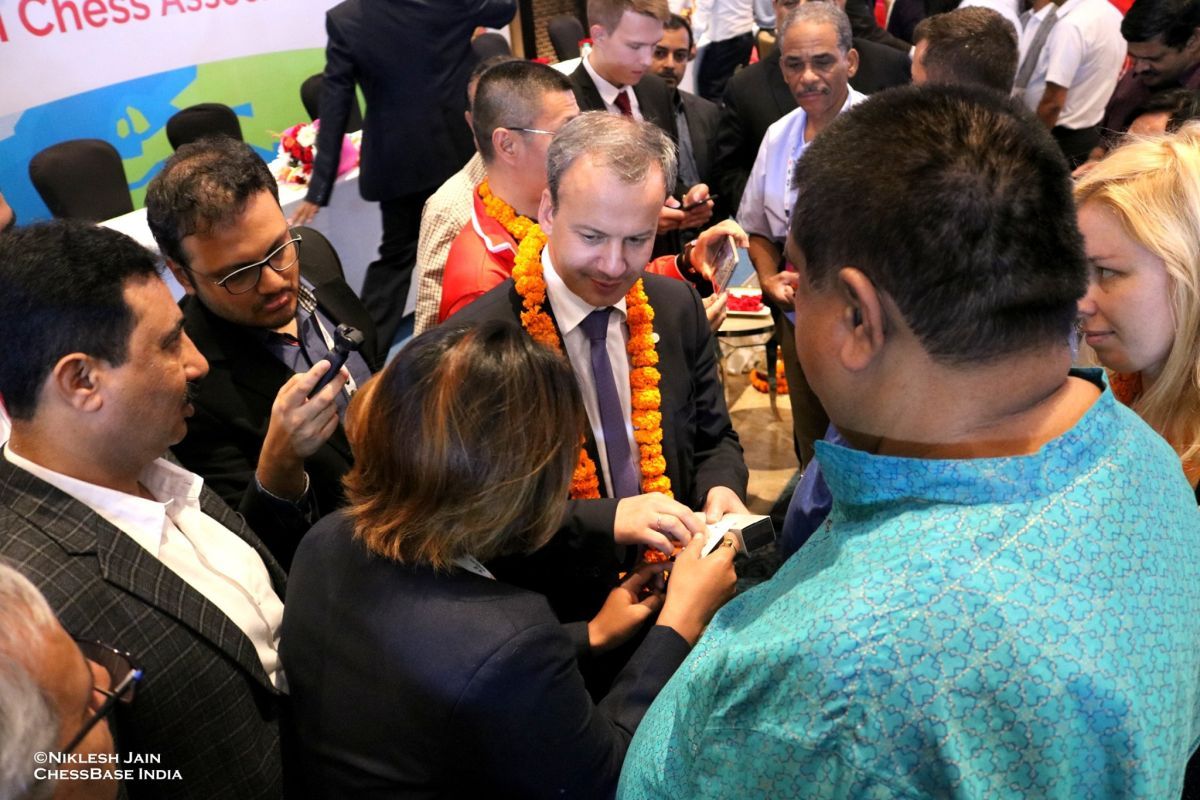 A lot of officials had something to say to the FIDE President | Photo: Niklesh Jain 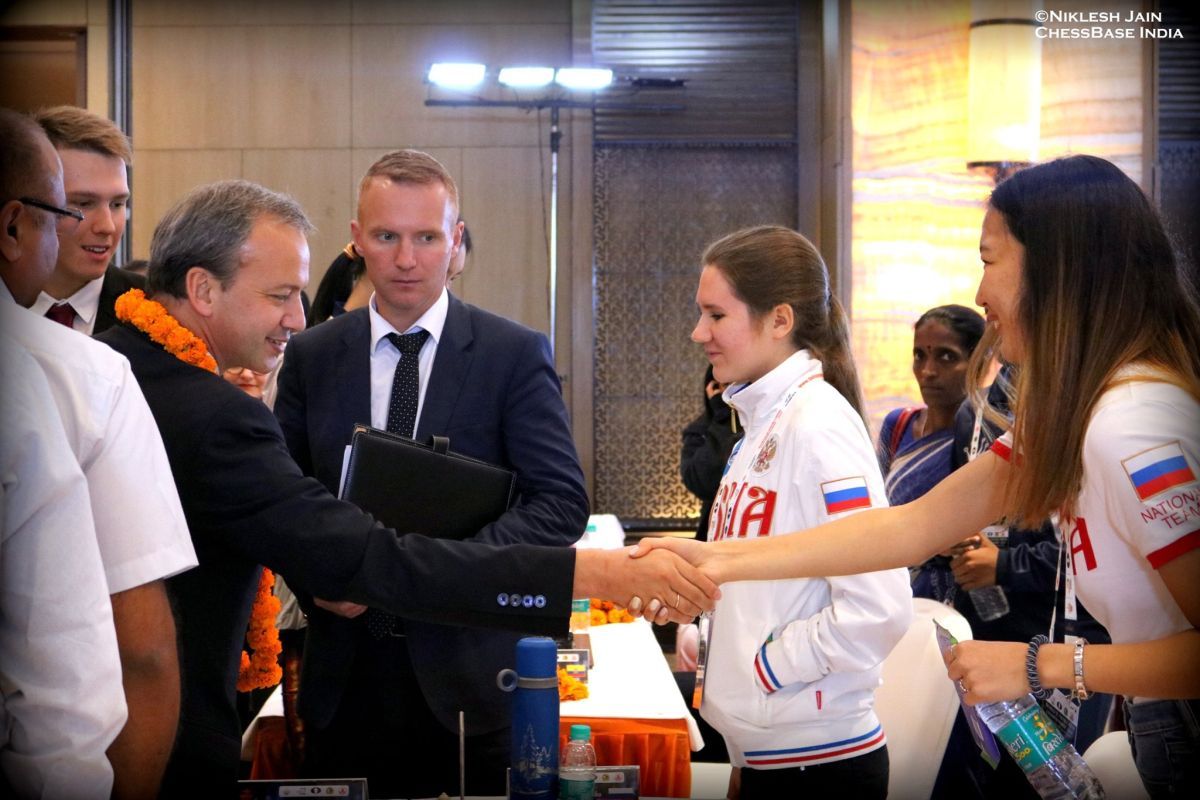 Greeting the top Russian players - Shuvalova and Dordzhieva | Photo: Niklesh Jain
Dvorkovich's one hour visit to the venue summarized in this video along with interview by Tania Sachdev

D.V. Sundar, the current Vice-President of FIDE in his speech summarized Dvorkovich's principles. Says Sundar, "During the elections, I was in the opposing team of Arkady Dvorkovich. We lost to a very desirable candidate. A few minutes after the defeat Dvorkovich came to me and said, I do not know if you are going to fight for the Vice President's spot, but I would like to have you as an honorary Vice President. At that point I realized that he was not a politician but a statesman." Later Dvorkovich confirmed this by saying, "It doesn't matter to me whether someone gave me a vote or not. The most important thing is to work together for the development of chess."

The open section of the world juniors has 94 entries. 78 of them are titled players with 15 GMs and 31 IMs. The top seed of the tournament is GM Amin Tabatabaei and there are 18 players above the rating of 2500. While Iranian GM Amin Tabatabaei is the favourite, he will be provided stiff resistance from Aravindh Chithambaram and Karthikeyan Murali, second and third seeds of the event. 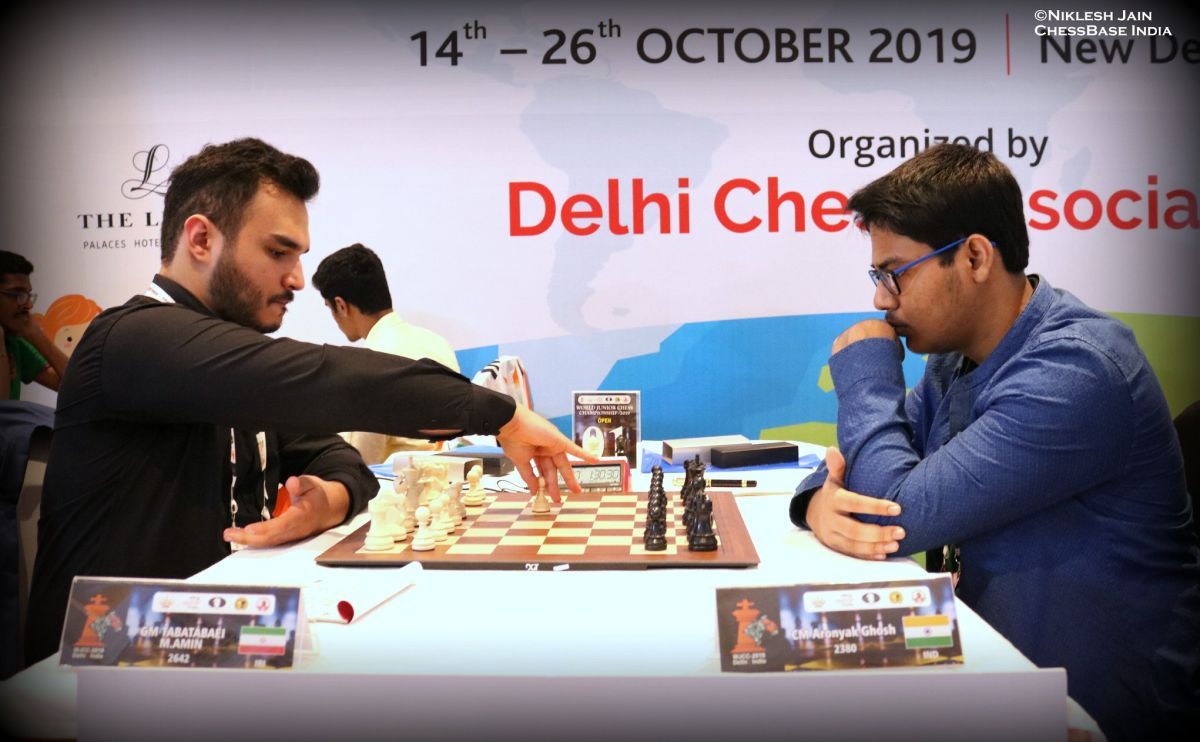 Top seed Amin Tabatabaei had a tough first round opponent Aronyak Ghosh. Aronyak was the under-16 World Youth Bronze medalist. The game ended in a draw. | Photo: Niklesh Jain

There was a point in the game where Tabatabaei could have taken his chances, but was unable to do so. It was quite a difficult resource to foresee: 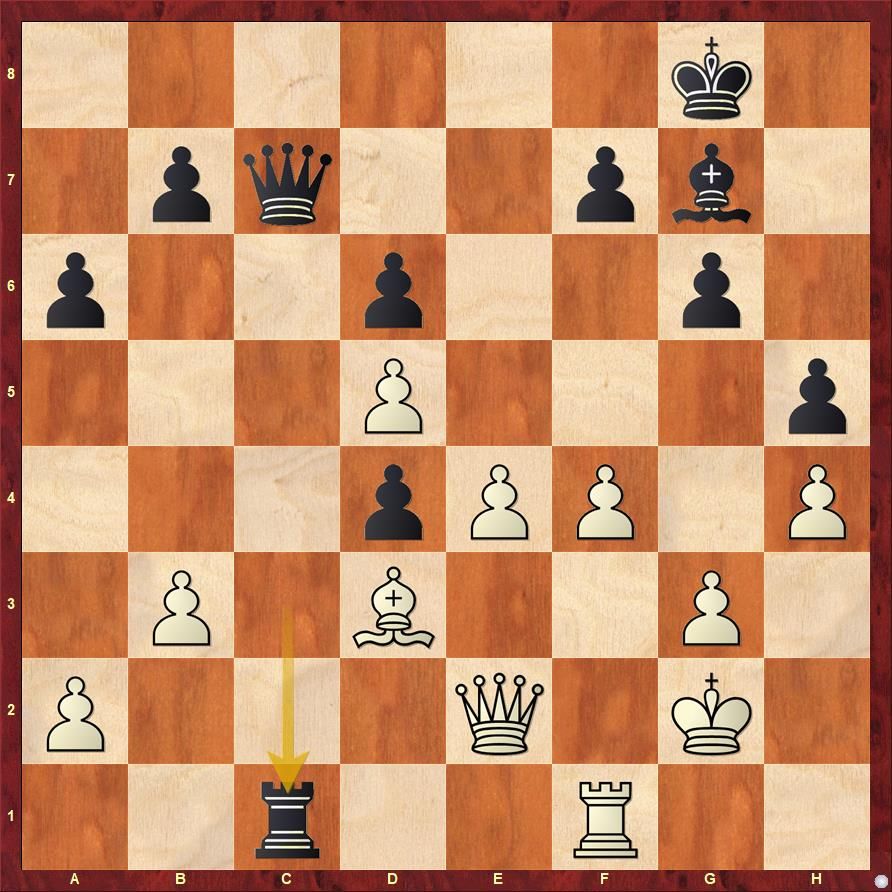 ...Rc1 was a natural move by Aronyak and Tabatabaei took the rook on c1. Instead White had a powerful move here. Can you find it?

The right move in the above position was e5! With the subtle point that Rxf1 is met with e6! and Black is in trouble. 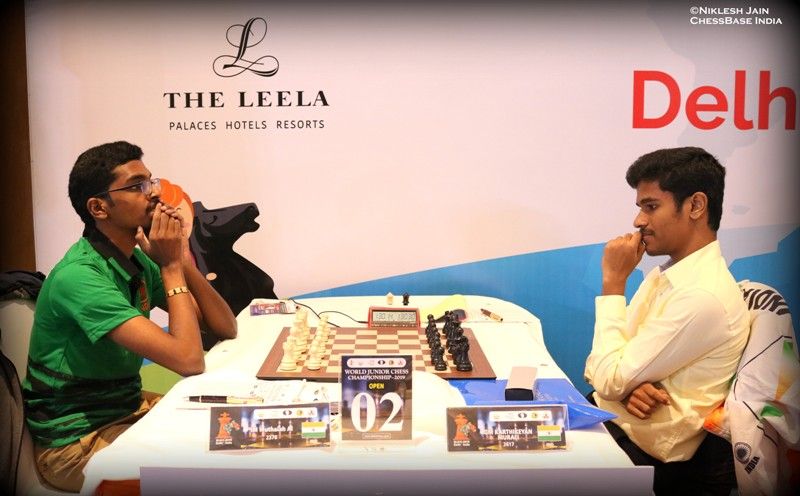 Karthikeyan Murali had good winning chances against AL Muthaiah, but was unable to convert the same | Photo: Niklesh Jain 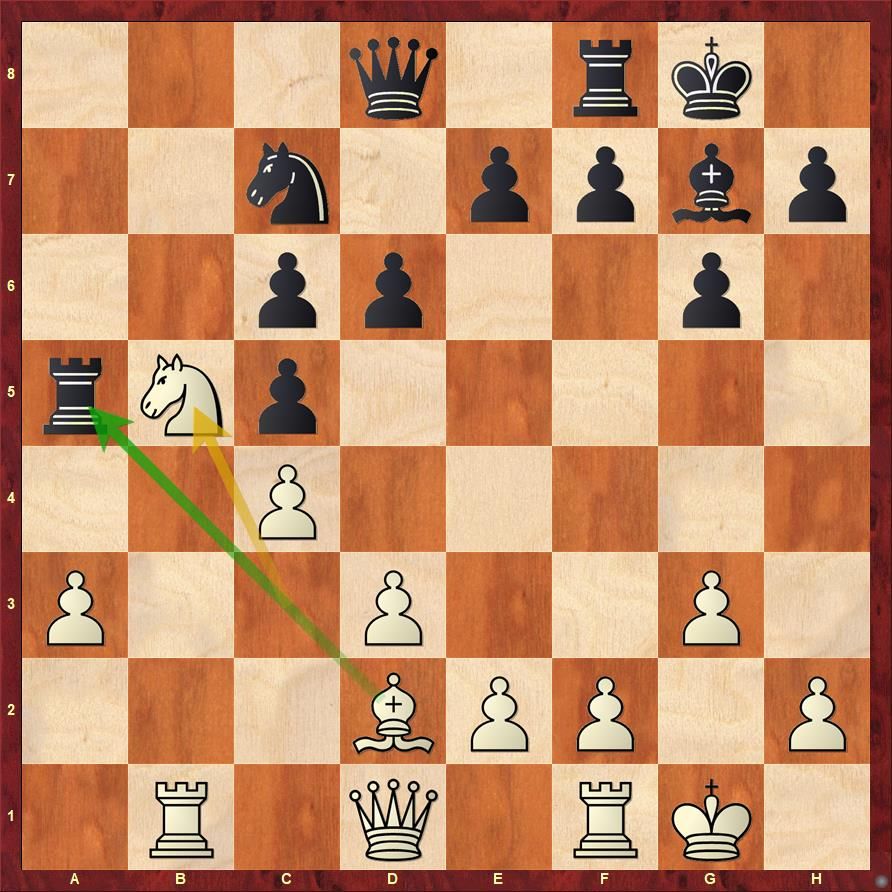 White played his knight to b5 unleashing an attack on the rook on a5. How should Black react?

Karthikeyan took on b5 with his knight and sacrificed an exchange. Instead the better way to continue would have been to play ...Ne6! A powerful move when after Bxa5 Qxa5 the knight on b5 is trapped! 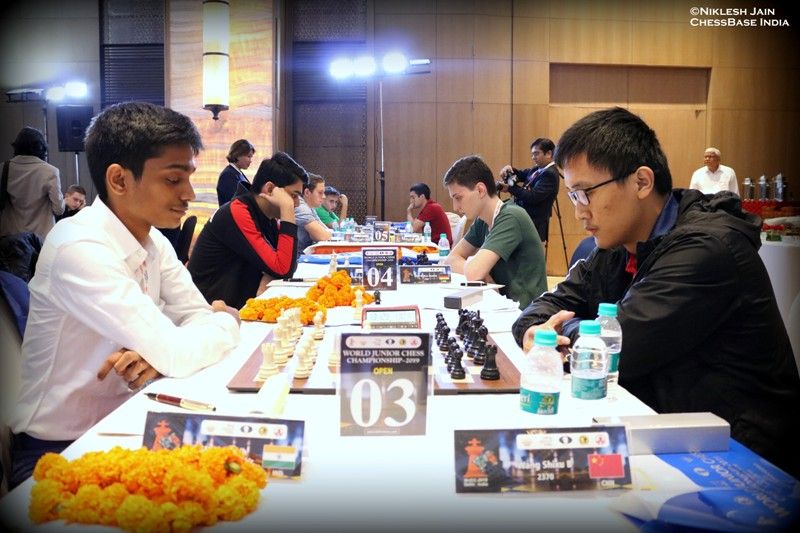 Aravindh Chithambaram was also held to a draw by Wang Shixu of China | Photo: Niklesh Jain 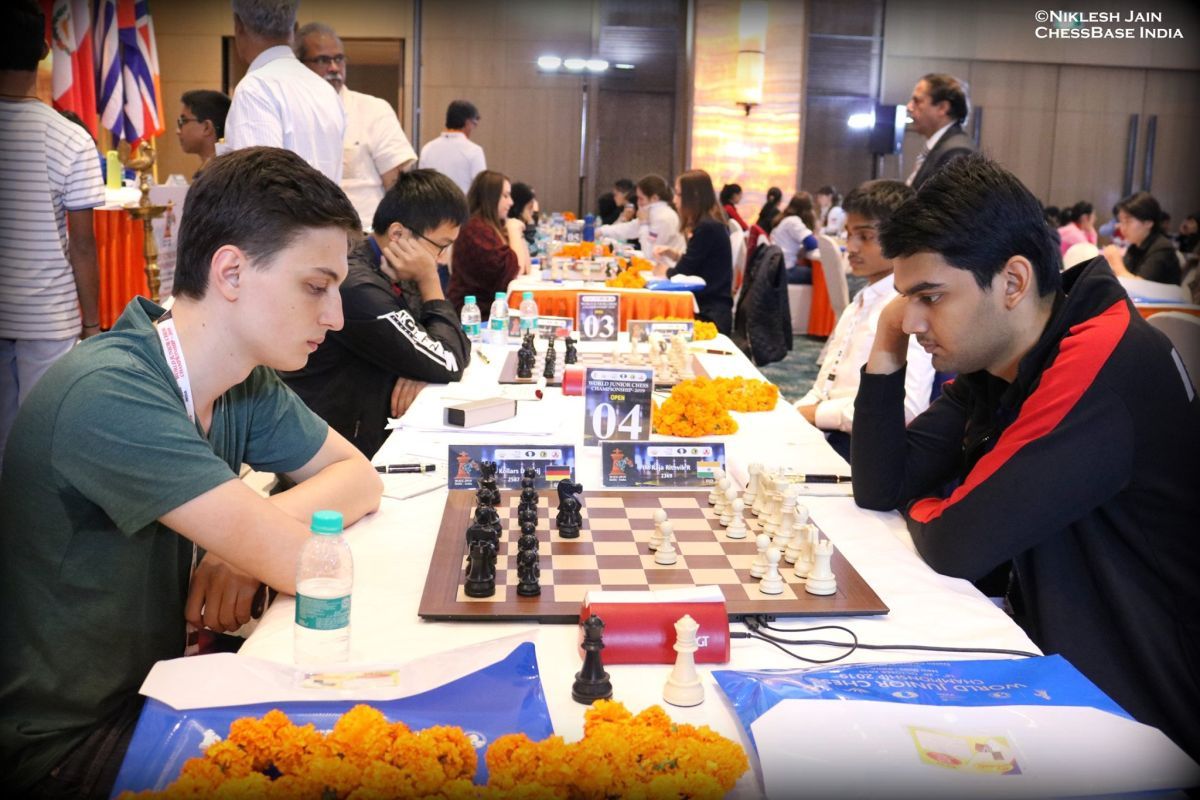 The fourth seed of the tournament is Dmitry Kollars (left). He won his game against Rithvik Raja. | Photo: Niklesh Jain 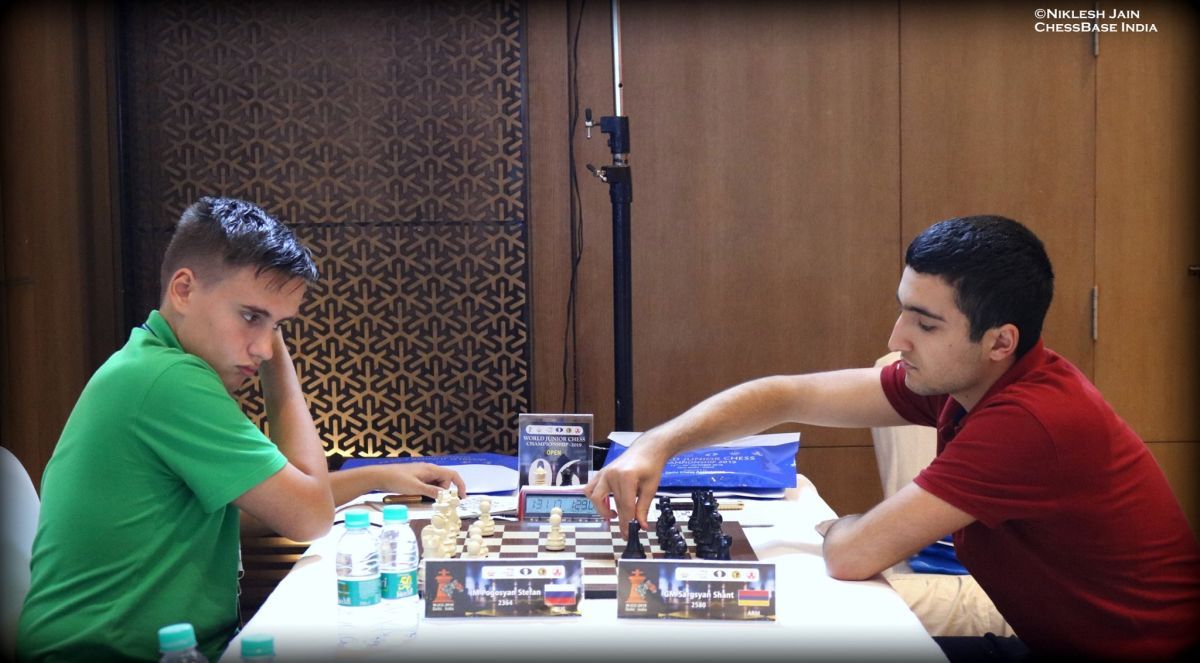 The top Armenian representative at the tournament Shant Sargsyan won his game with ease against the under-16 world youth silver medalist Stefan Pogosyans | Photo: Niklesh Jain 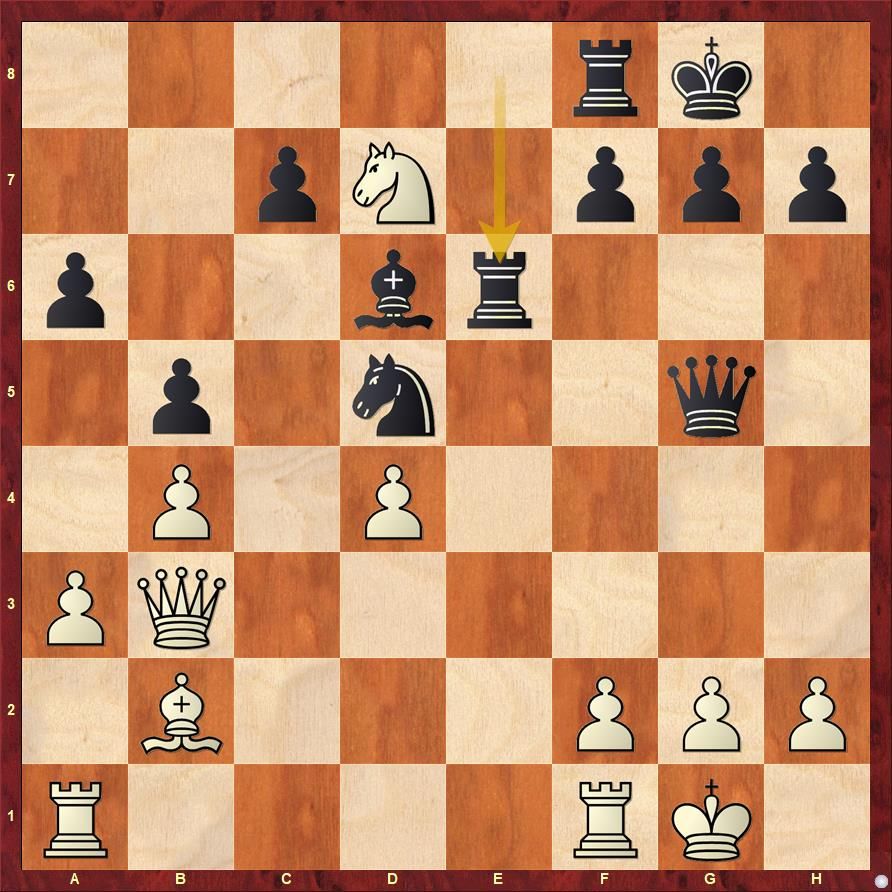 ...Re6 is a nice move. Here it was important for White to play g3 and Rfe8, then get his knight to e5. Instead White took on f8 here. It turned out to be a mistake. Why?

After Nxf8, Shant Sargsyan took on h2 with Bxh2+ Kxh2 and this was followed up by Rh6+ White now threw in the towel with Qh3 but instead of he had gone Kg1 then after Nf4 Qf3, the very pretty mate starts with Qxg2+! Qxg2 Ne2# 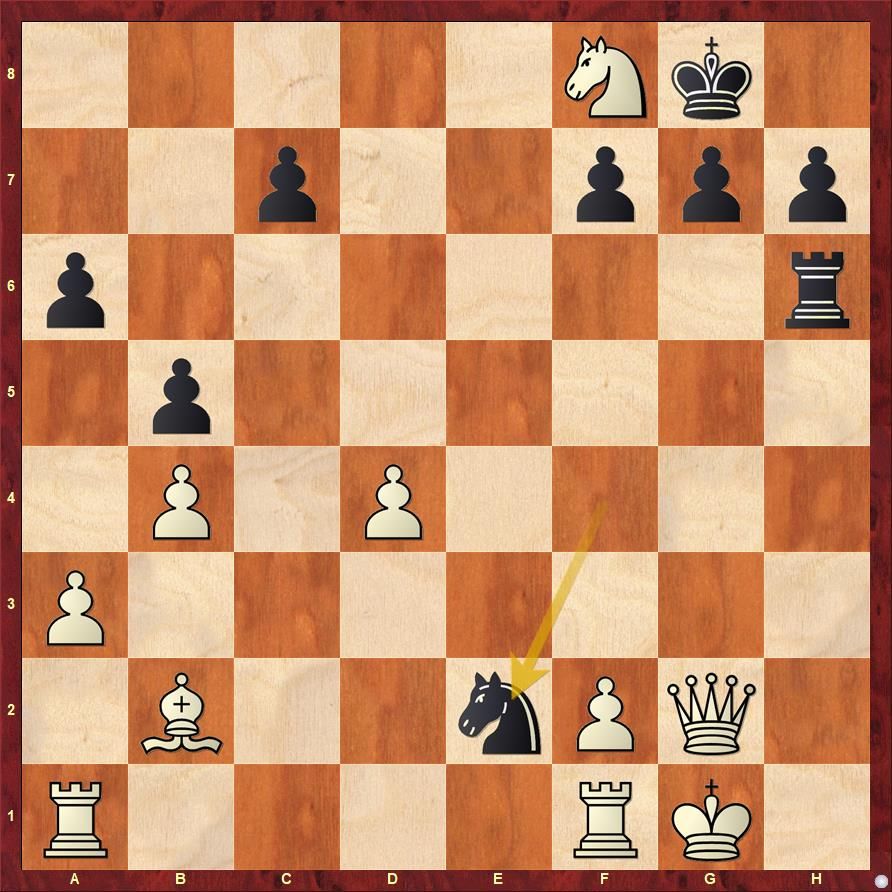 Now that's one pretty mate!
Shant Sargsyan speaks to ChessBase India after his round one victory 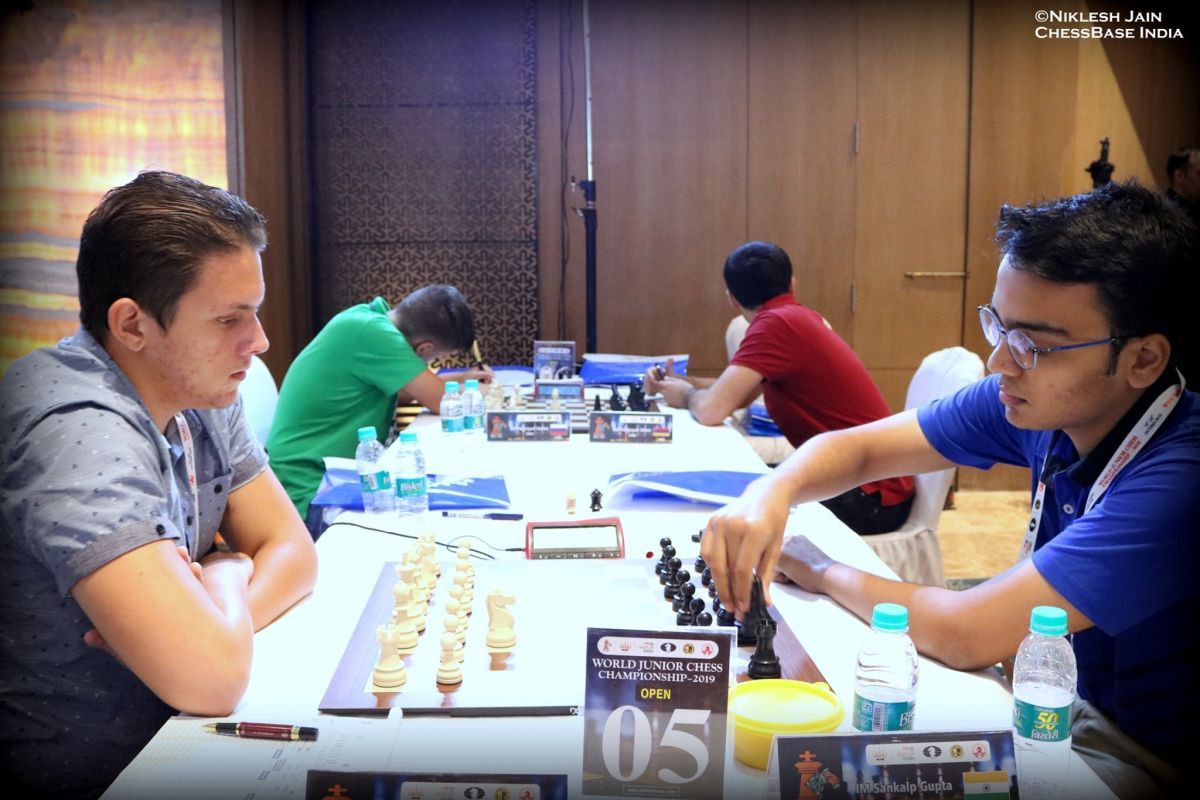 The biggest upset of the day in the open section was definitely Sankalp Gupta getting the better of Daniel Albornoz (2581) | Photo: Niklesh Jain 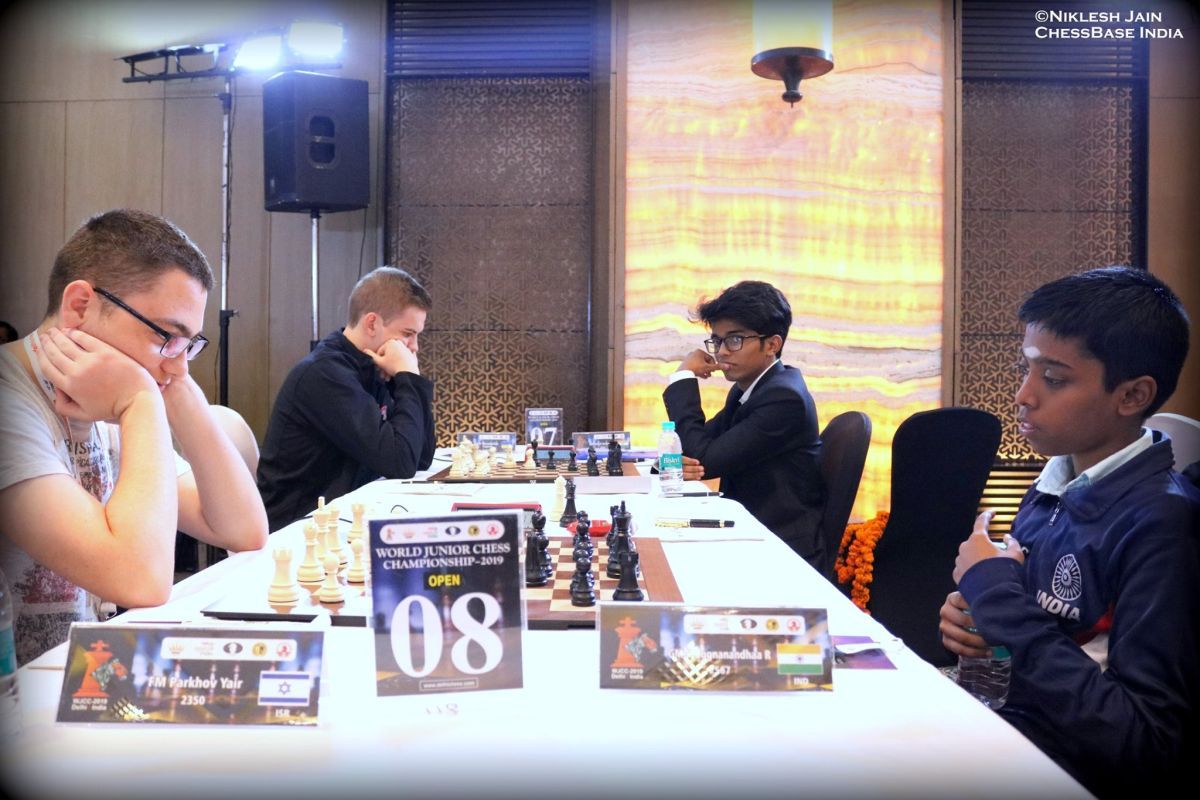 Praggnanandhaa after winning the world under-18 will have his eyes on the under-20 world title! He started off with a win. | Photo: Niklesh Jain 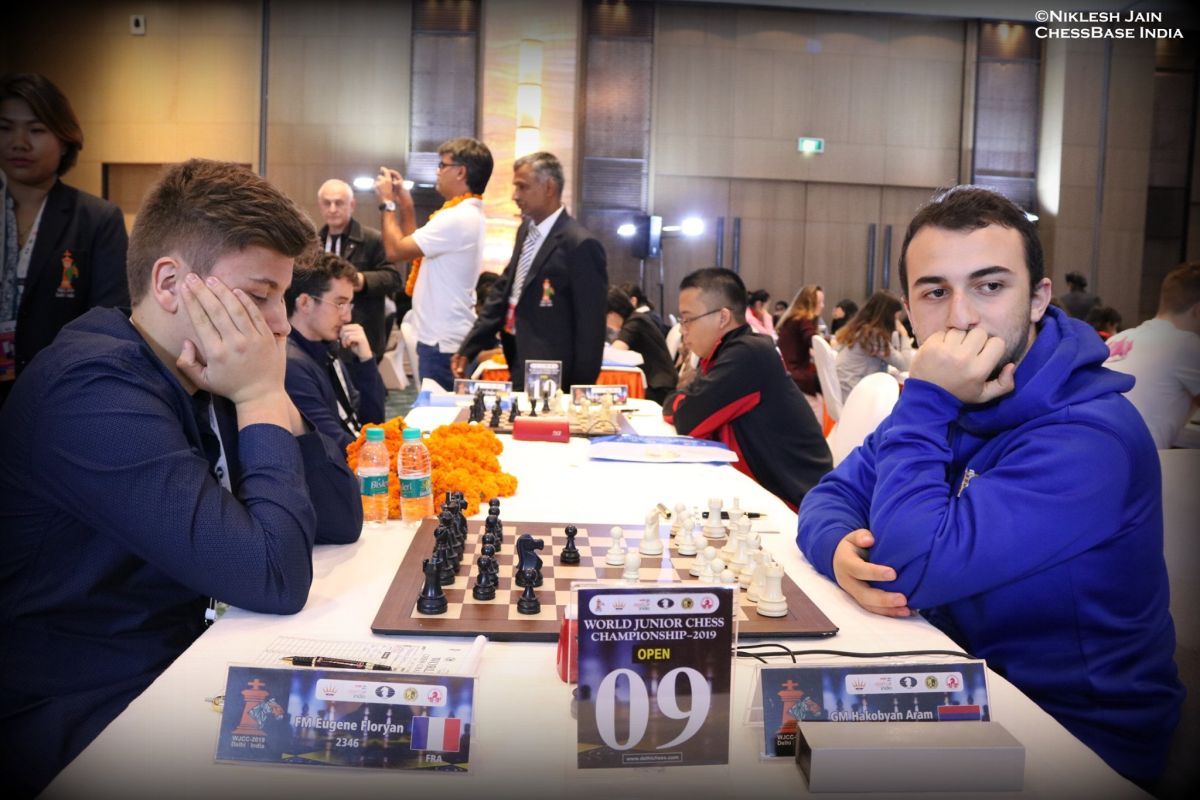 Aram Hakobyan as in his element today as he won a very complex game against Eugene Floryan | Photo: Niklesh Jain 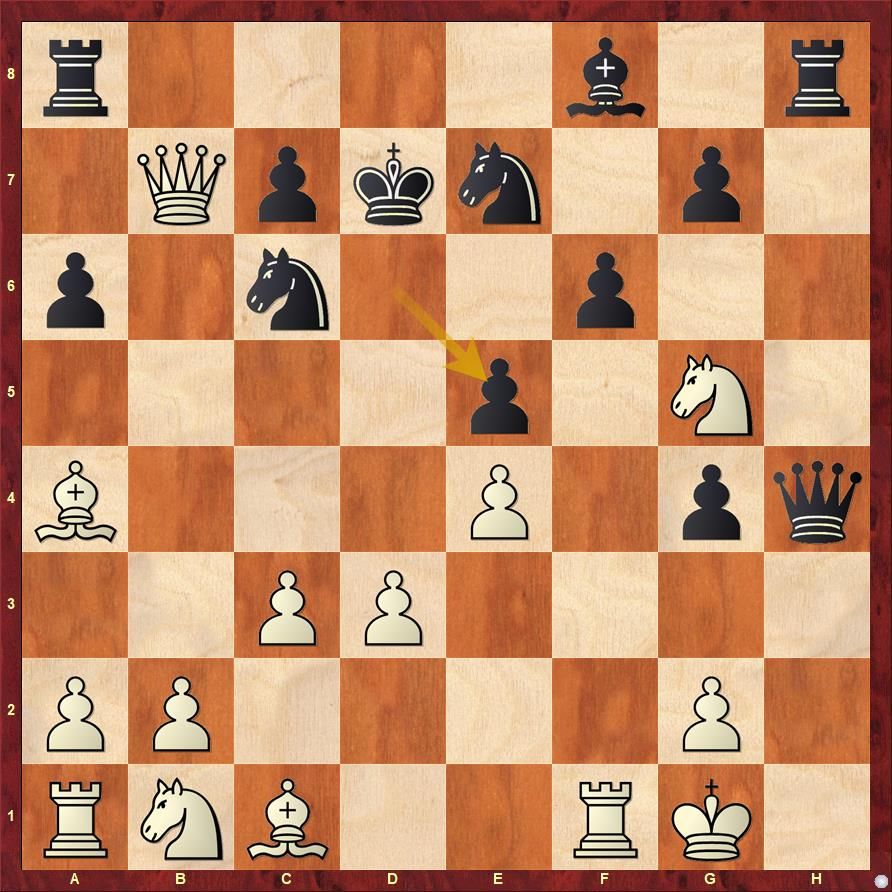 White is a piece up and also the rook on a8 is hanging. However, there is quite some stress related to the mate down the h-file. How did White solve his problems?

The problem with Qxa8 is that after fxg5, White has to agree to a draw as g3 is coming up. Aram, who looks like he is in great form, continued with d4! opening up the center. after fxg5 he played d5! and now it is White who would reach faster to the black king because the d-file has also opened up!

Aram shows and explains his win

Here are a couple of interesting games that took place in round one that have been annotated by WIM Angela Frank Jain:

It is perhaps for the first time in the history of chess that the number of participants in World Junior girls is equal to the participants in World Junior open section! Both have 94 players. The top seed of the tournament is the strong Chinese player Zhu Jiner (2507). Zhu is rated above 2500 but she hasn't applied for her WGM or IM titles. She is still a WIM. Zhu Jiner will face stiff resistance from players like Stavroula Tsolakidou, Nurgyul Salimova, Polina Shuvalova and local girl R. Vaishali.

Starting rank in girls under-20 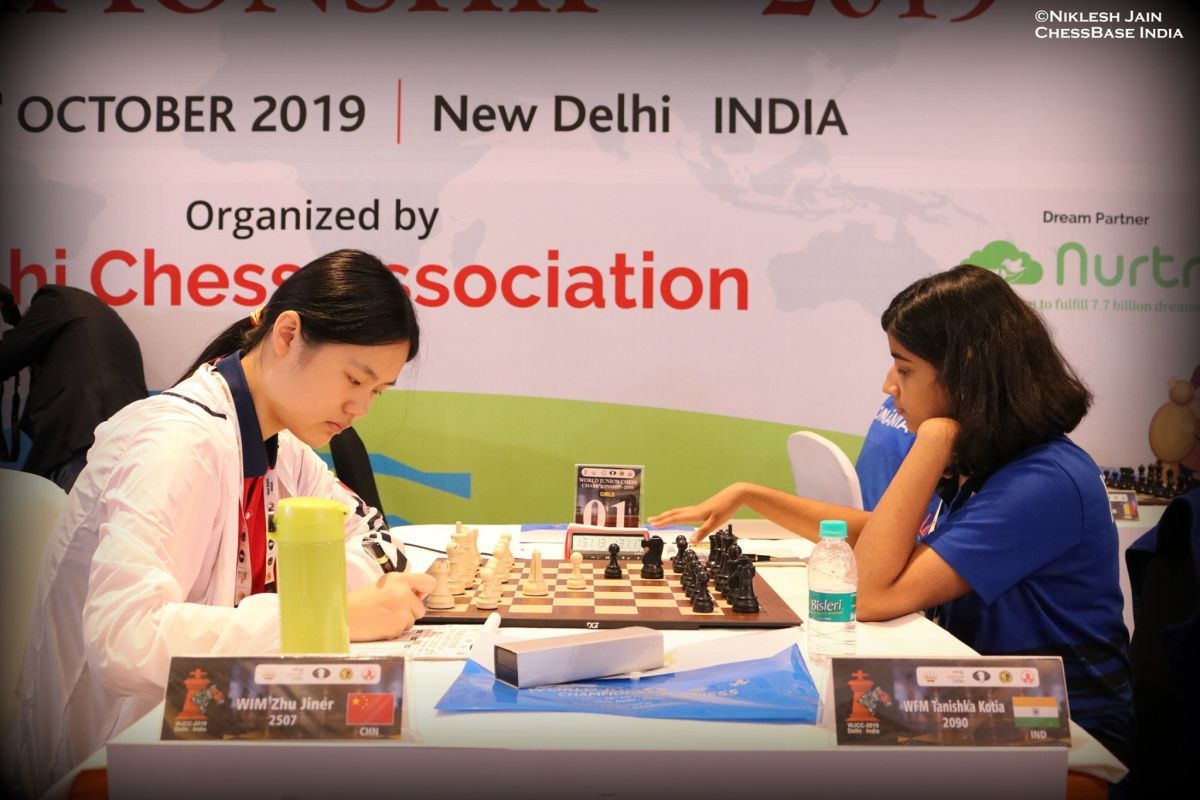 Zhu Jiner was held to a draw in round one by Tanishka Kotia of India. In fact the top seed was lucky to have escaped with a draw. At one point she was losing the game. | Photo: Niklesh Jain 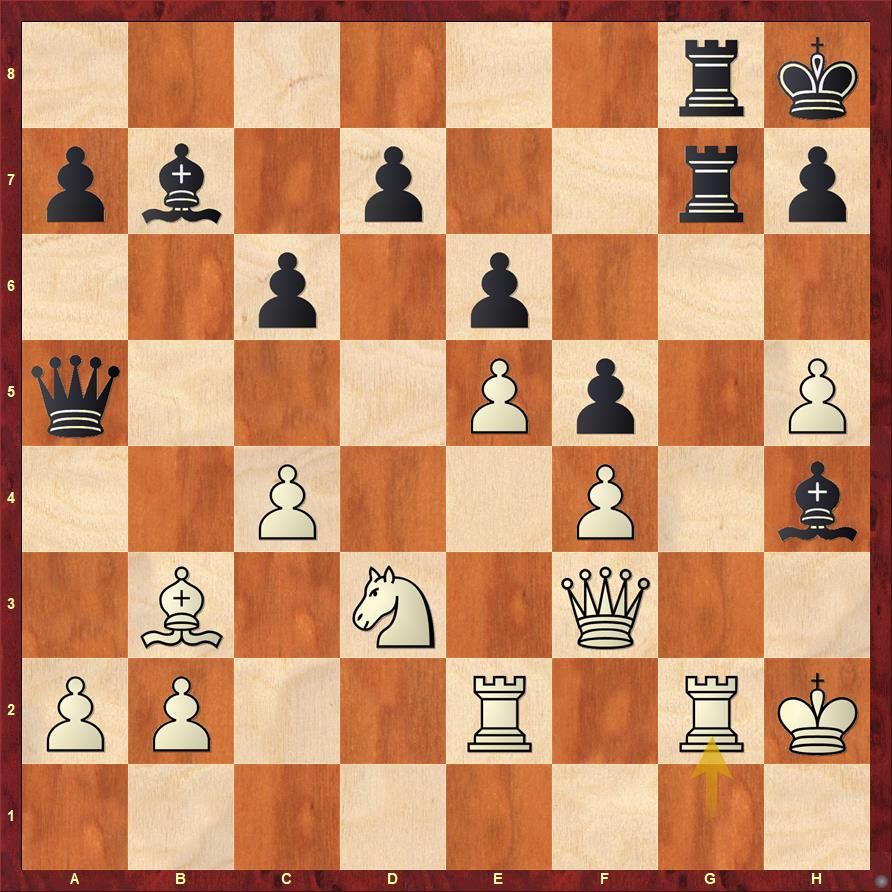 White's last move Rgg2 was a mistake. Black can now win the game with Rg3! and it is all over. Instead Tanishka fumbled a bit and played ...Qd8 which allowed Zhu Jiner to escape with a draw. 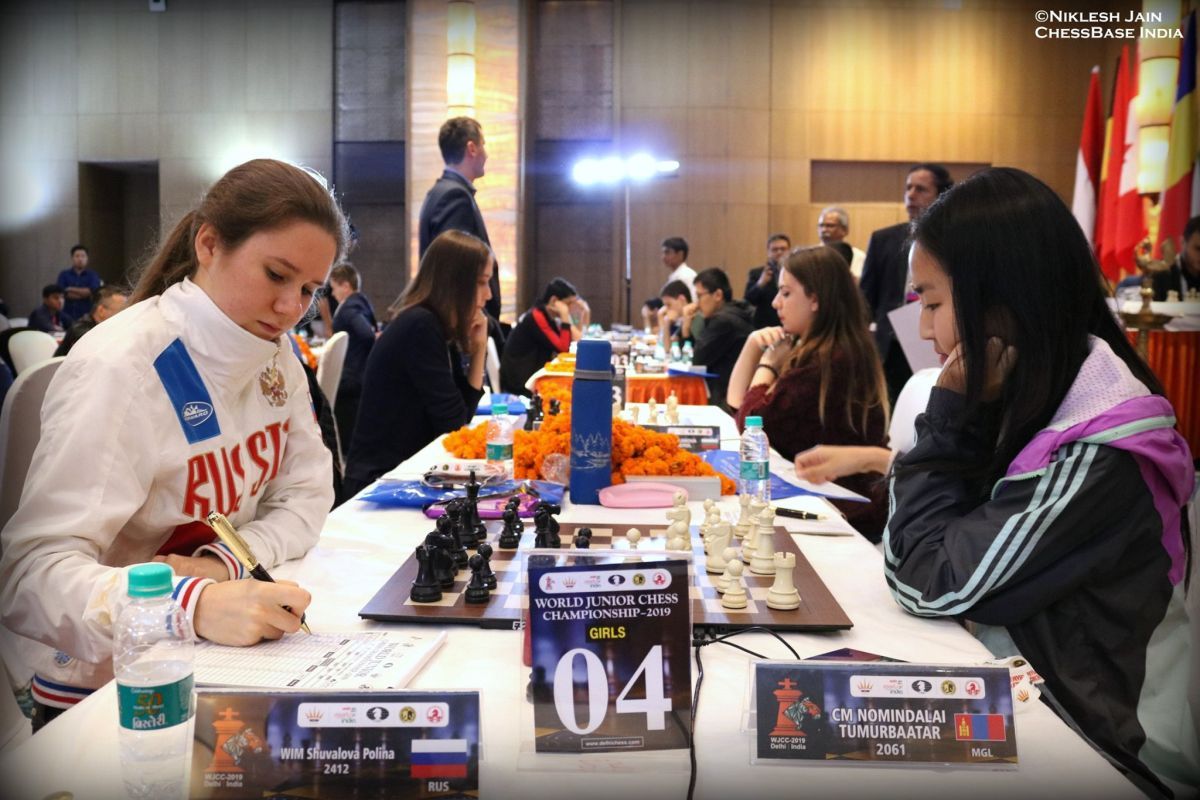 Polina Shuvalova was put under some grave pressure by her opponent Turmurbaatar Nomindalai in round one itself | Photo: Niklesh Jain 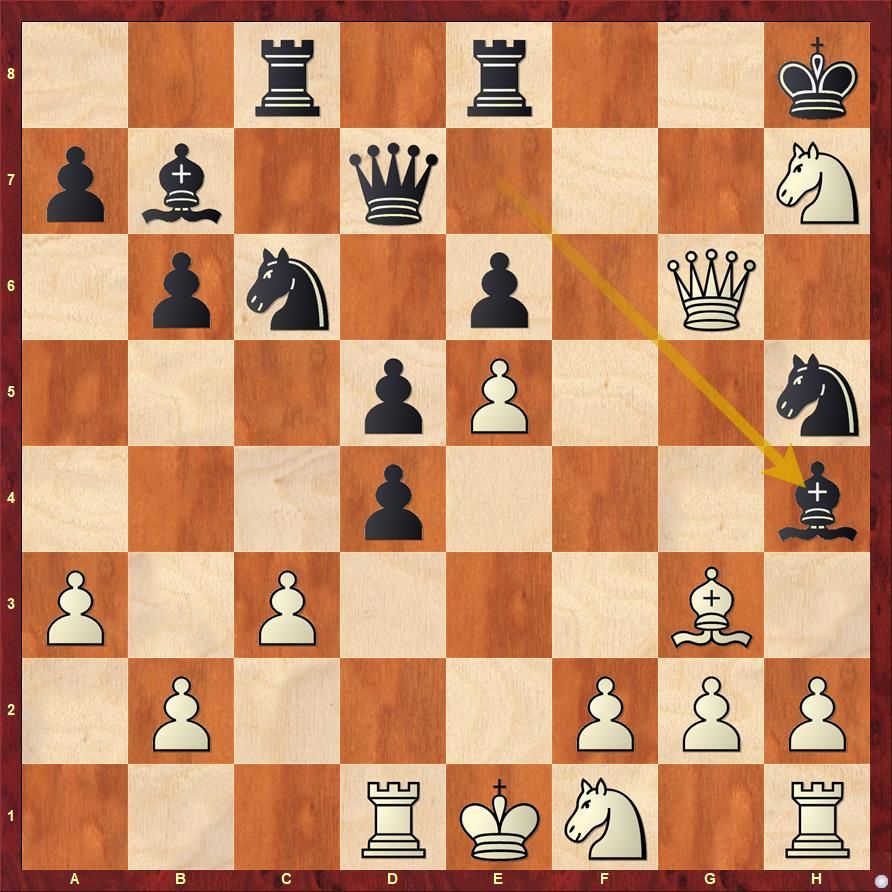 Here White should have taken on h5 with her queen and after Qxh7 Qxh4 White is better. Instead White went Ng5 in the above position and after Bxg5 Qxh5 Qh7 Qxg5 Qe4+ the game ended in a draw soon

The ChessBase India team at the venue has worked hard to create highlights for day one of the World Junior Championships 2019. It has the video clips so that you can get a feel of the players fighting it out at the venue and it also has some expert analysis so you know where the players are going wrong and learn from it. Let us know in the comments section below, whether you like this video or not!

Highlights of round 1
Very few people have supported chess in a sustained and consistent manner like Ramco Systems has. When Vishy Anand was making his way to the top of the chess world, Ramco Systems came forward and supported him for nearly a decade. Now Praggnanandhaa, the next big hope of Indian chess is also supported by the same organization and its founder Venketrama Raja. Why does Ramco support chess in such a big way when the general perception is that there is not enough return for the sponsors? In this video Venketrama Raja, the founder, mentor and innovator in chief of Ramco Systems tells us the reason. 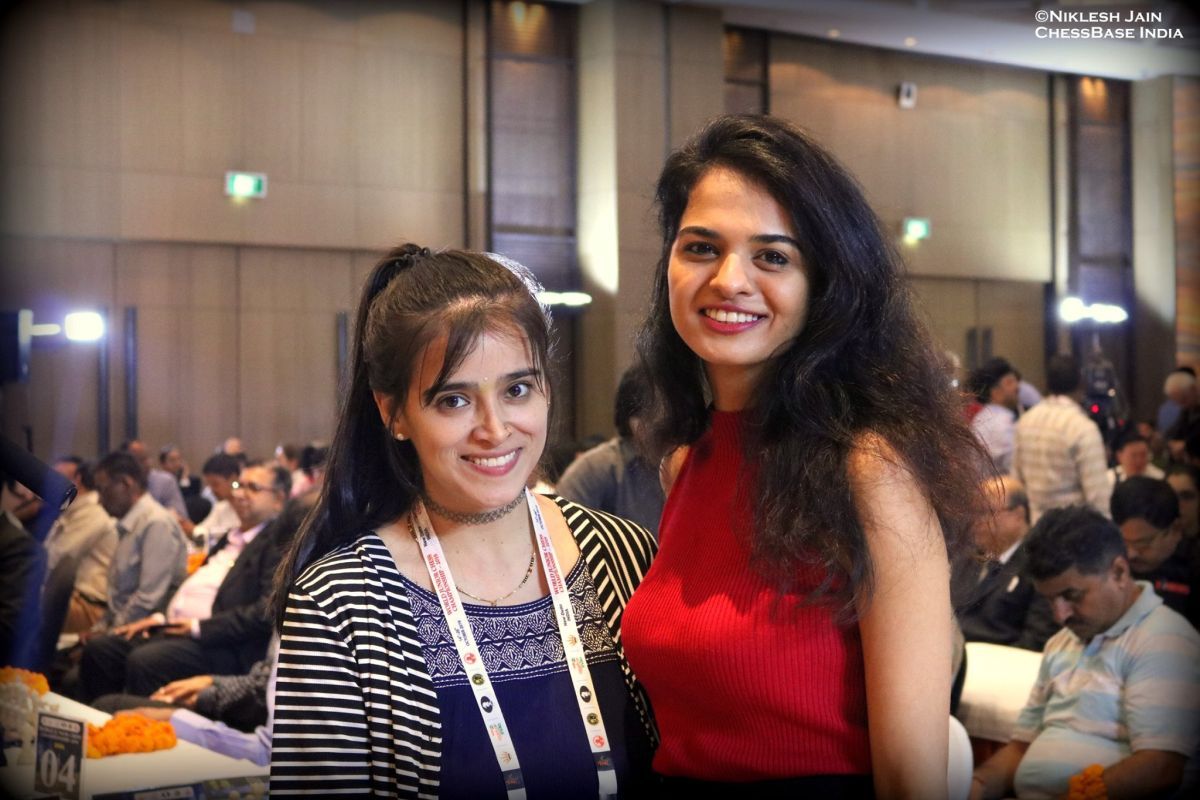 A big thanks to Angela Frank Jain for annotating the games of round one. She will also annotate some of the games in the next rounds as well.