The Queen's Gambit Episode 5 is titled 'Fork'. We all know what 'Fork' in chess means. However this episode is not about the tactical theme 'Fork', it is more about Beth coming at a division of roads where there is no wrong choices but it is her who has to make the decision for herself. We get to see a lot of games in this episode starting with Smyslov-Botvinnik, Tal, Ivanchuk, Kramnik and David Baramidze's games. Beth plays a lot of Speed Chess against Benny which draws a huge crowd. Moreover we also get to know that Beth loves to analyze her games and study strong players games instead of solving positions. Photo: Netflix stream

Fork is a chess term which is a type of Double Attack. It means when a piece is attacking two or more pieces, it is called a Fork. For those who are unfamiliar with the chess term, it can easily be described as the fork which we use while eating salad, a modified form of spoon which can be used to pick up multiple pieces of fruit or vegetable or anything that can be pierced by the fork.

One of Beth's former opponent Harry Beltik calls her and he talks about her game against Borgov which also implies Beth's other major loss in some fragments of their spoken words. He comes over to her place with a bunch of chess books, most of which Beth has read and few of them were fictional chess books but few actual chess books were also shown - My Chess Career by J R Capablanca, Alekhine's Best Games 1938-1945 (Althought Fornaut addition was either in the book or could be just made for the mini-series). Beth also accuses Bogoljubov and Grunfeld to have memorized everything in a nonchalant way. Well a lot of women like to play Grunfeld Defence as black, was it a nod to that by the writers? I will leave that to your imagination. 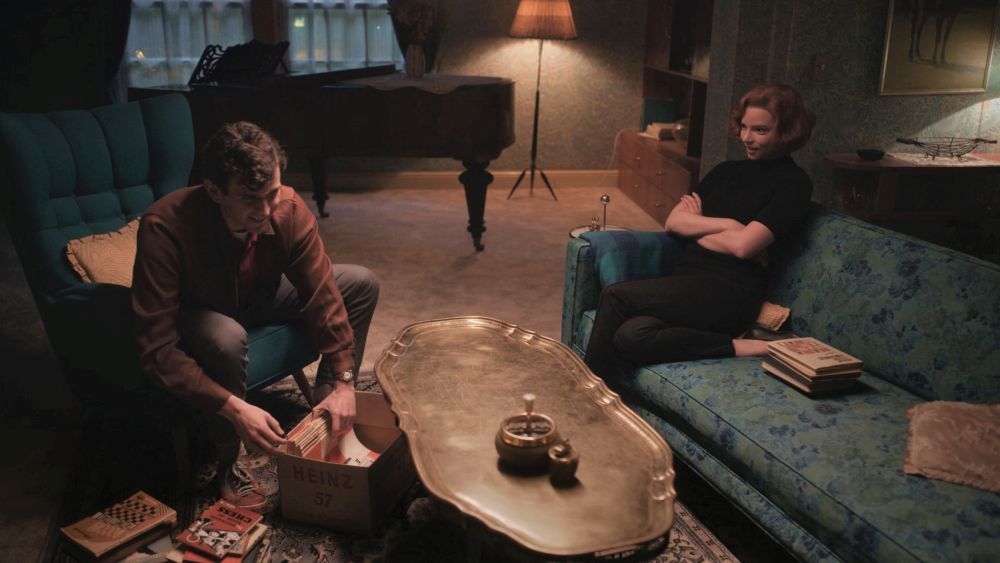 The scene cuts to the next one where we see Beltik analyzing Beth's game from US Championship 1966 against Benny Watts where he claims to have found a win for her. Although initially Beth scoffed it off as an ancient history, but she eventually played it out just to see what Beltik had found. Of course they were neither the strongest nor their was any computer available at that time, so their analysis is not the best which shows that before the computer era revolutionized everything, all calculations were humane. 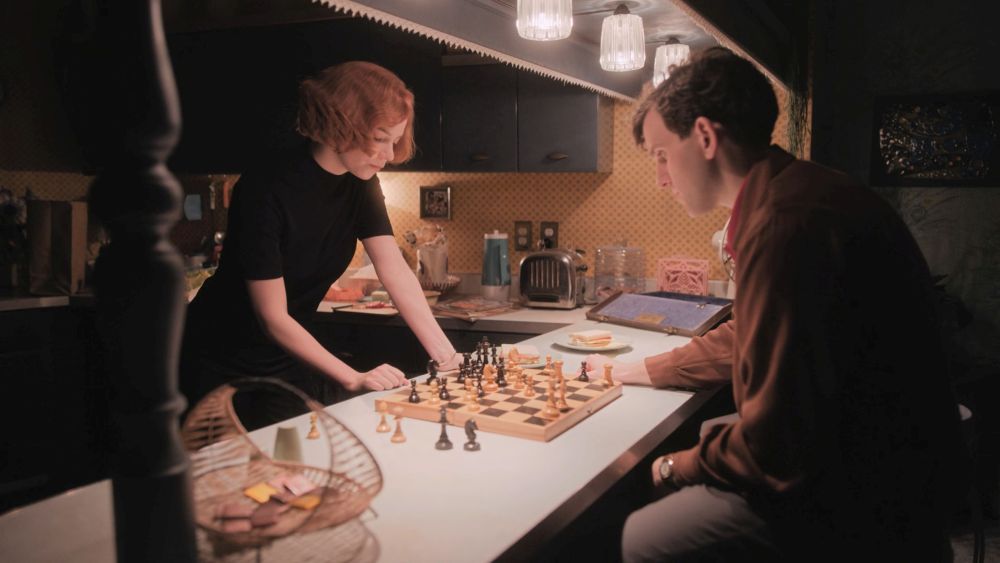 For those who want to see what the position was, here you go: Of course white is winning here, try to find the best continuation. Here is the continuation which was shown in the episode, another reminder that it's not the best white can do here.

On the following morning when Beth practices with Beltik again, we see the same position on the board again with slight alteration. Not sure if it was deliberate or it was implied that they continued where they left off on the previous day. 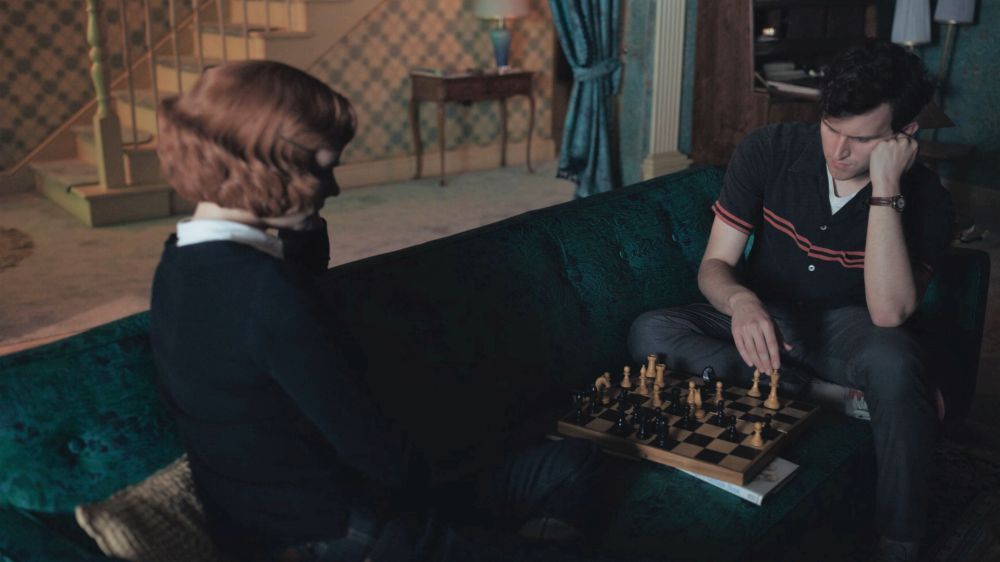 Can you spot the difference? | Photo: Netflix stream

After a while we see a Borgov interview, where he is shown playing Simul against adult men when he was a kid, a homage to Reshevsky's feat of doing similar at the age of eight years. The interviewer lady repeats Kasparov's words, "Few things are as mentally brutal as chess". Borgov's reply is also another Kasparov quote with a one word modification, "Attackers may sometimes regret their moves, but it is much worse to forever regret an opportunity you allowed to pass you by". Beltik tells Beth that it is not always about attacking and then shows a game between Smyslov and Botvinnik but he actually sets up the position. It could be that incorrect position setup is part of Beltik's joke. 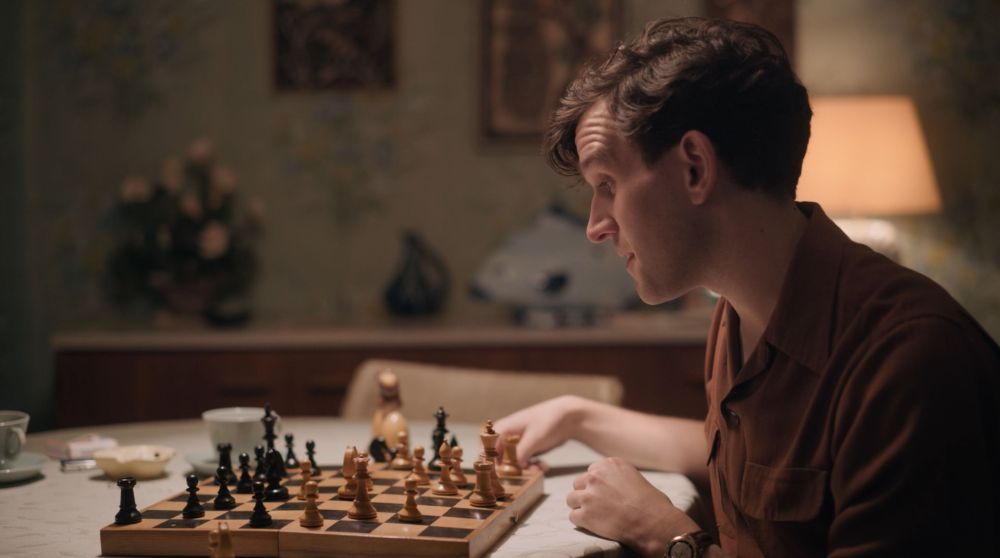 Beltik has setup an incorrect position of the game between Smyslov and Botvinnik | Photo: Netflix stream

Can anyone identify Beltik's joke? Someone in the process of making of this mini-series is definitely a fan of Smyslov and Botvinnik games. We saw one in the previous episode too. 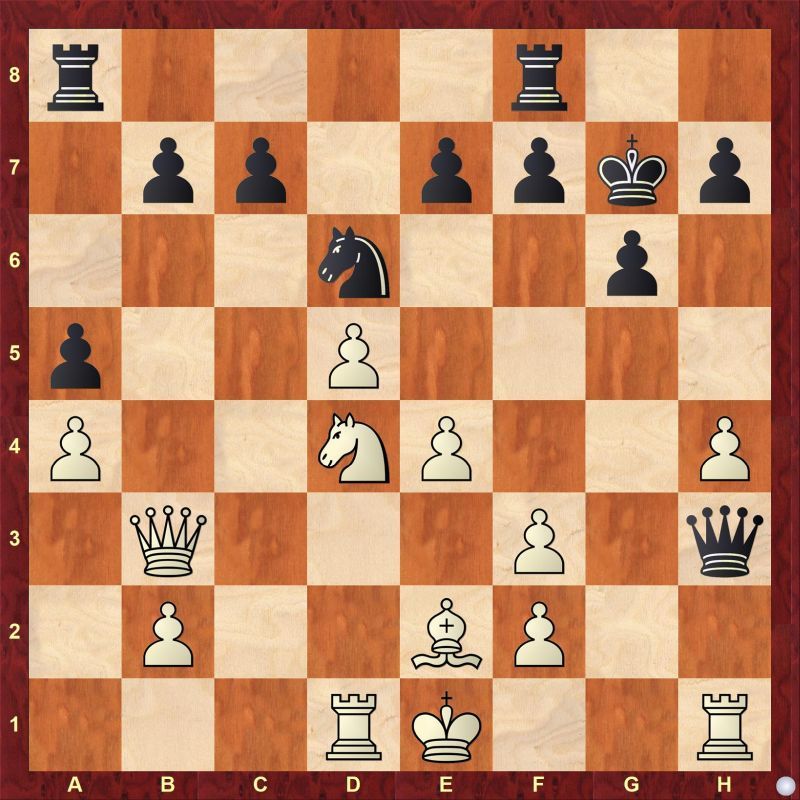 Obviously the above position is not actually what happened in the game, because whoever plays the move wins the game by capturing opponent's material. Here is the actual position: 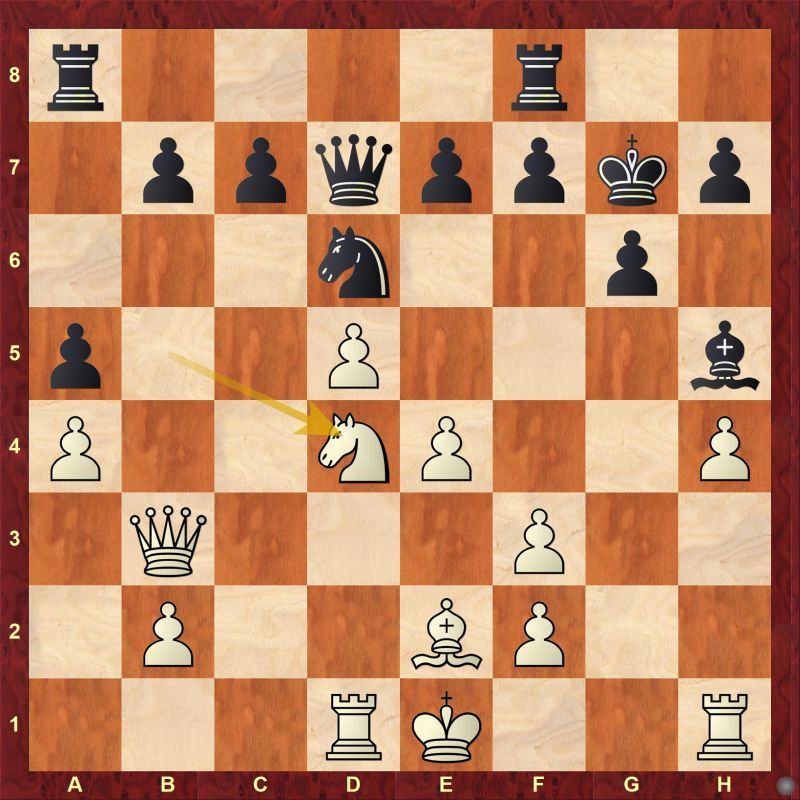 Check out the rest of the game where Botvinnik really had the option to capture the h4-pawn. It is a different story altogether whether it was a good idea or not.

After a couple of scenes, Beltik while doing the dishes, mentions an interesting quote by French Philosopher Diderot, "It's foolish to run the risk of going mad for vanity's sake". He also mentions how it affects brains by doing blindfold exhibitions. Beth mentioned about American chess player George Koltanowski playing blindfold chess all the time. Beltik also mentions about Morphy and Steinitz. 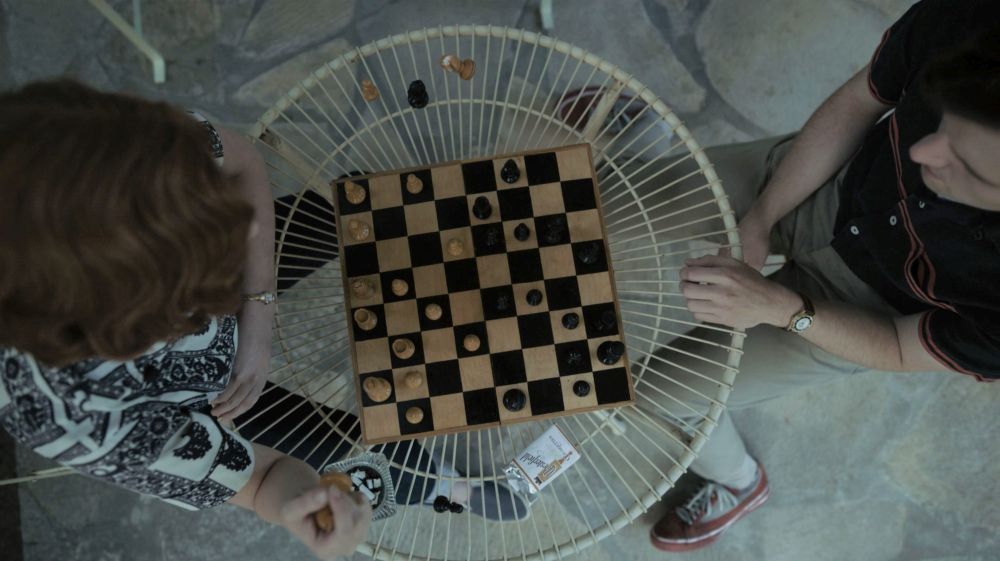 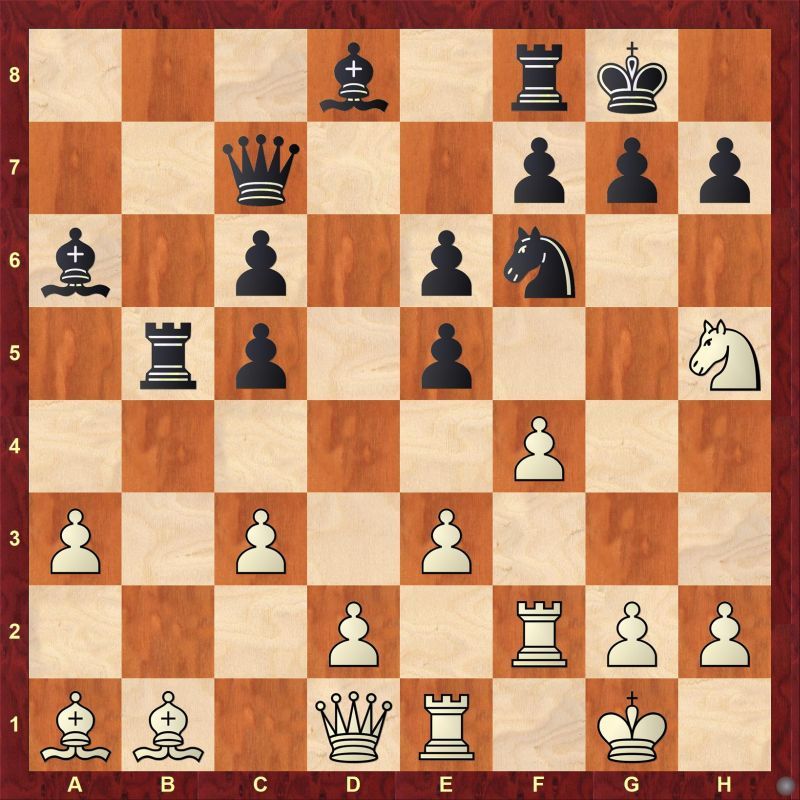 Beth got upset when Beltik couldn't understand white's idea behind 2.c4 after 1...Nxh5. Here is the continuation which she told Beltik.

Beltik mentioned Morphy being called as 'The Pride and Sorrow of Chess' which is also the name of the book on Morphy. However the book was first published in 1976. Beth's next tournament was US Championship 1967 at a university in Ohio. 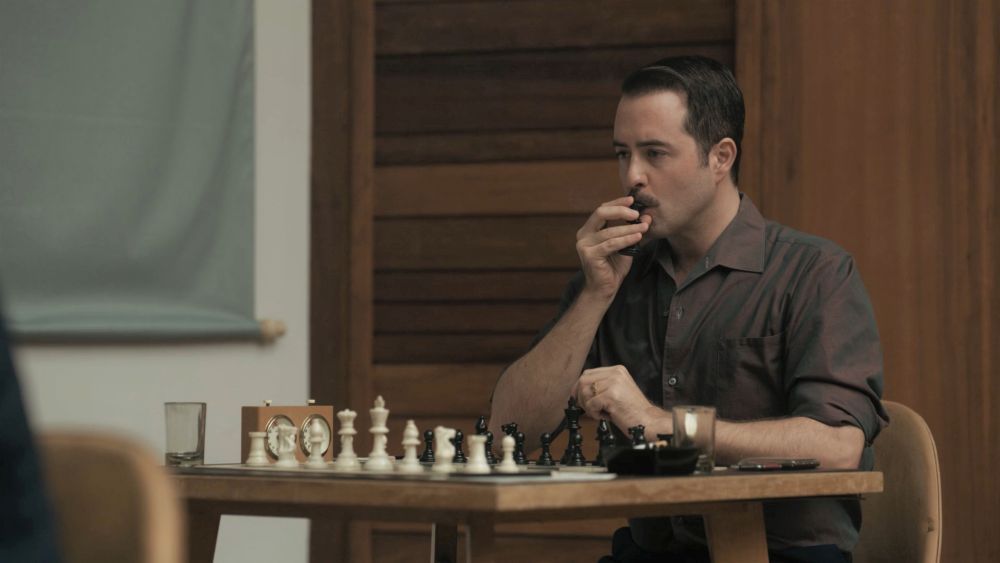 Have you met an opponent who kisses the piece(s) and pray before the game? | Photo: Netflix stream

Reigning US champion Benny Watts, correctly complains to Beth about the board, pieces and venue, he also mentions the fact that if it were golf or tennis tournament, it would have gotten much better coverage and then spots someone napping at the stands. We all have felt that at some point and probably still do. 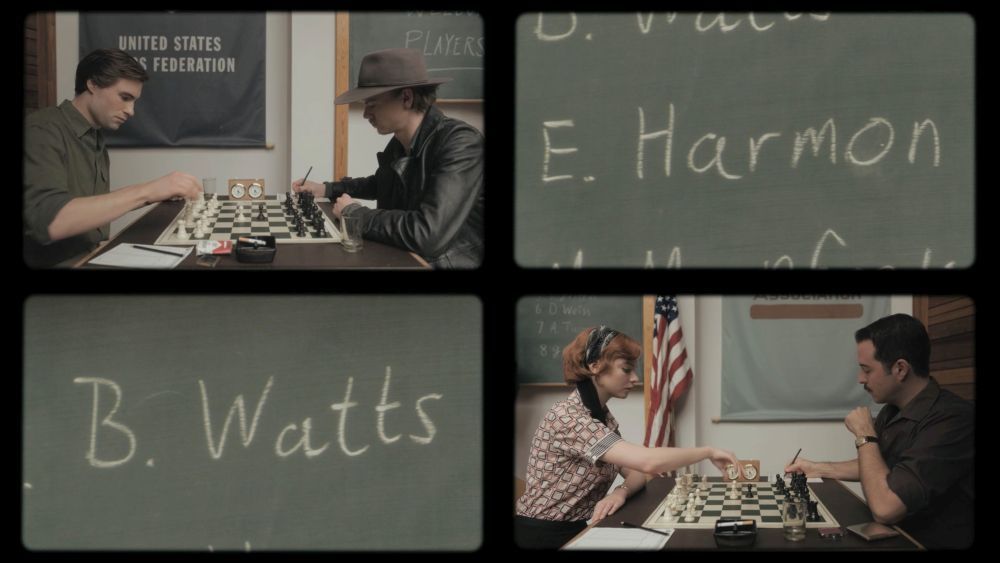 Beth debuts Queen's Gambit for the first time and this collage foreshadows her future battle against Benny | Photo: Netflix stream

We do not see any proper game but we see a montage of Beth and Benny's wins which obviously sets up their clash in the final round of the event.

After a couple of days, we overhear Benny saying, "...I can tell, on the first move, whether someone's got that or they don't just from how they move that first piece." Well first piece or not, anyone who has played hundreds of tournaments can tell if their opponent is a serious chess player or just a beginner, just by seeing how they move the pieces. While this is arguably true, one funny thing we can notice is, often Beth is seen moving or capturing pieces like a beginner despite them being in the later stages (episodes) of Beth's career. Perhaps they were shot before maybe?

On the rest day, Beth shows up at the cafeteria to play some Speed Chess with Benny. On her way she sees all other chess players practicing. The first position we see on the screen when Beth is at the cafeteria is this: Beth arrives at the cafeteria to play some Speed Chess with Benny | Photo: Netflix stream

If you like playing Blitz then you will like this episode as it has a lot of speed chess in this. The above position occurred in three different games according to my database, the most significant one being played between Mikhail Tal and Vladimir Tukmakov from Alekhine Memorial 1971. Since we do not see the game being continued in the episode, we will just see the initial moves which were played by the world champion. 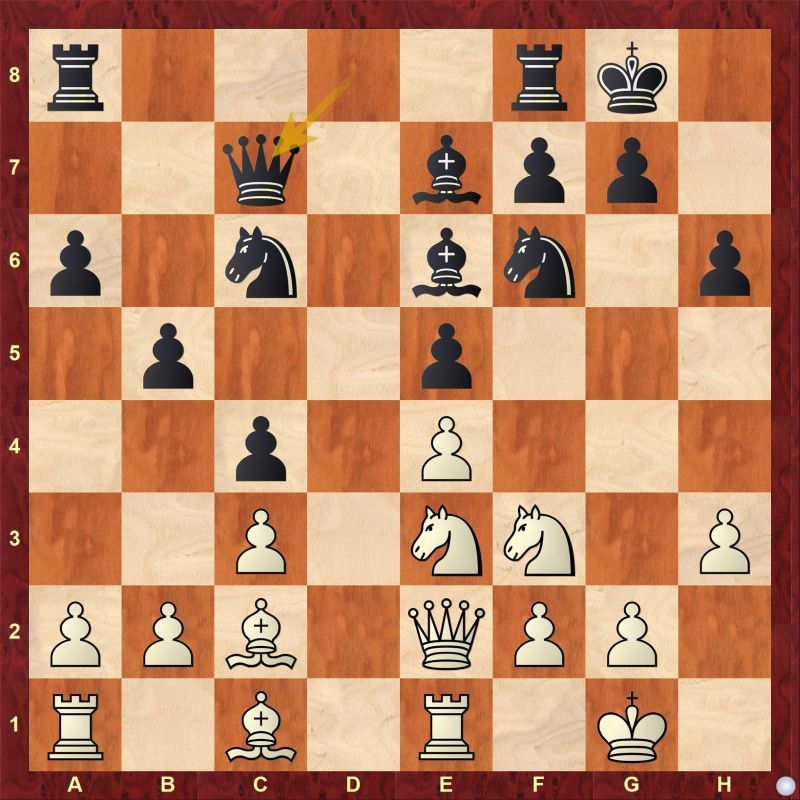 Beth played 18.Nd5 when Benny asked her what she would do in the above diagram. She plays 18.Nd5 very quickly after chiming, 'typical mid-game Ruy Lopez'. Although it is not the best move, it is not a bad move either. Here are the first moves to reach the above position 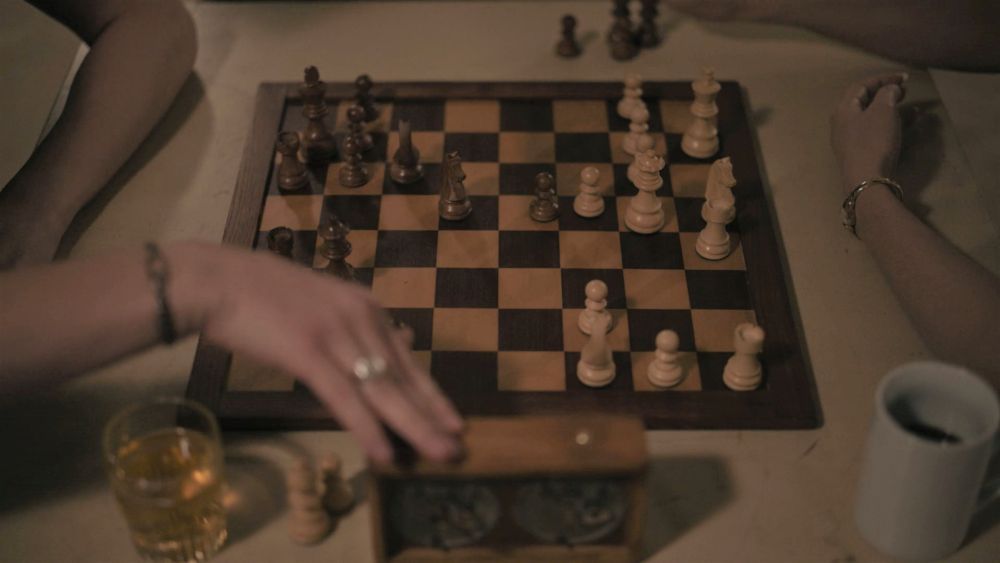 The above position is from the game between Nikolac Predrag and Vassily Ivanchuk from Moscow Rapid 1995 which Ivanchuk won. 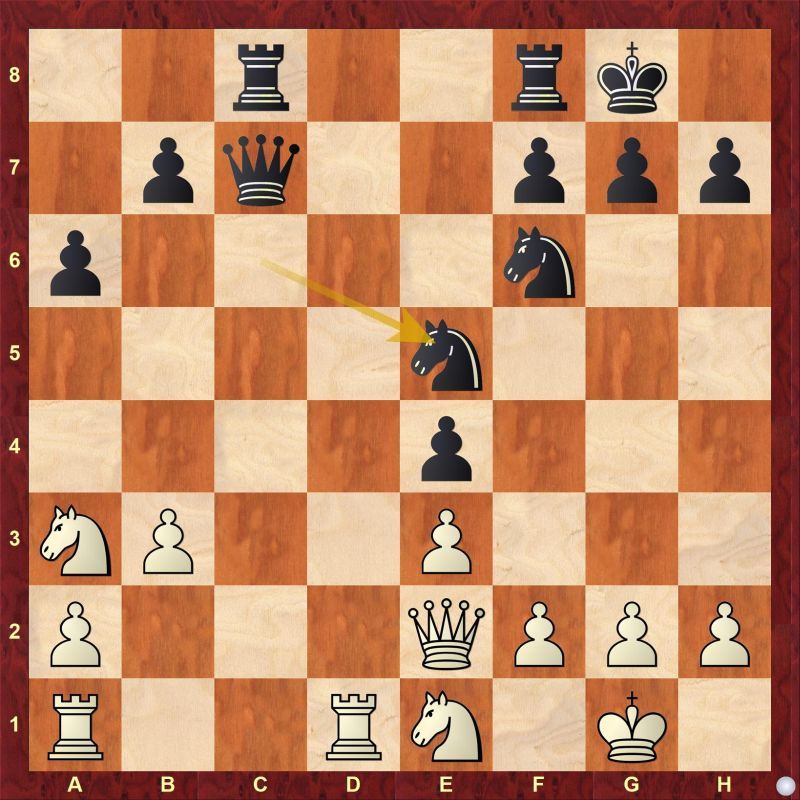 Ivanchuk won the game after 25...Rxd4. However for dramatization purpose, couple of extra moves were added to the episode. 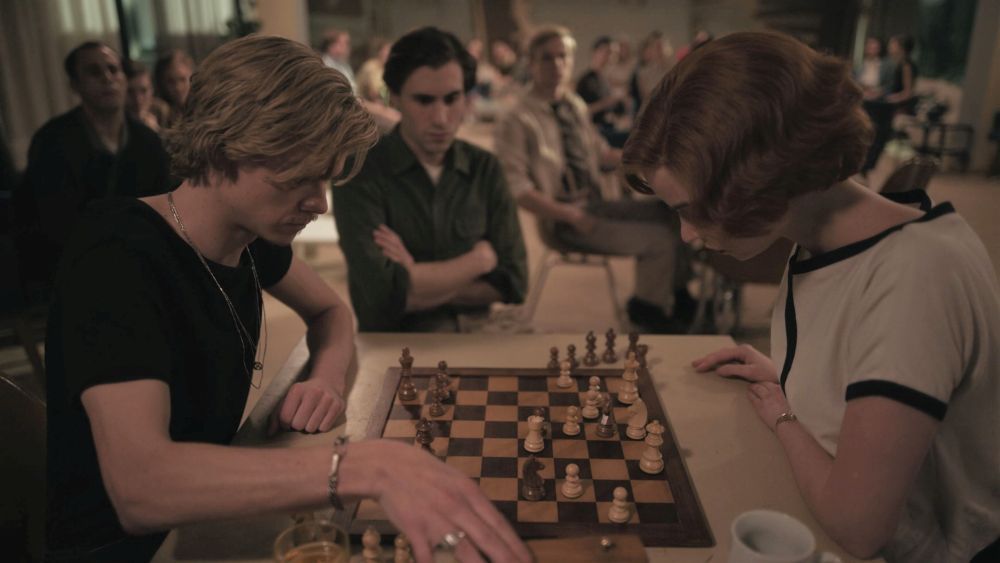 Well the name of the episode is 'Fork' not for this position only though | Photo: Netflix stream

The next blitz (could be a bullet) game we see is Beth playing with the black pieces where both players have barely two minutes each left on the clock. Do you recognize this position? | Photo: Netflix stream

Yes the second speed chess game is also another replay of the game played between Kramnik and Morozevich from World Championship Tournament played in Mexico City in 2007. 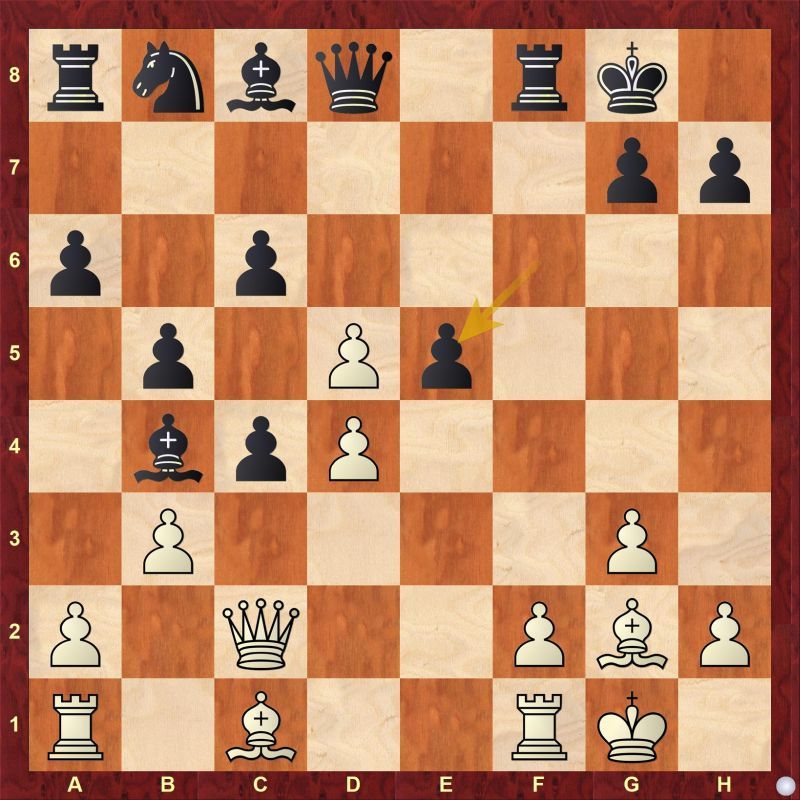 The camera cuts to the position after 13...fxe5 and then after a couple of moves the scene jumps to Beth playing 23...Qf3 and we don't see the rest of the game. The scene implies that Beth lost the game, in reality Morozevich lost too.

We only see Benny playing the last move which is also the winning move and a huge crowd has gathered to witness their game. 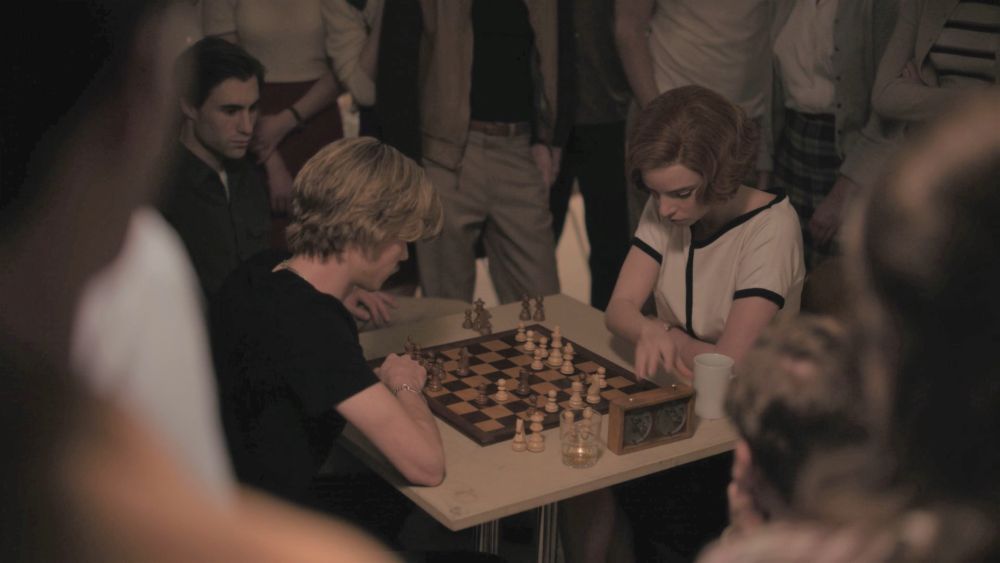 In case you are wondering, yes this was also a replay from a game between David Baramidze and Alexander Graf from 76th Germany Championship in 2005. Benny played 24....Re4 just like the game and Beth resigned.

In the next blitz game, we see Benny delivering a checkmate with Rg8, although Beth had already ran out of time as her flag fell. 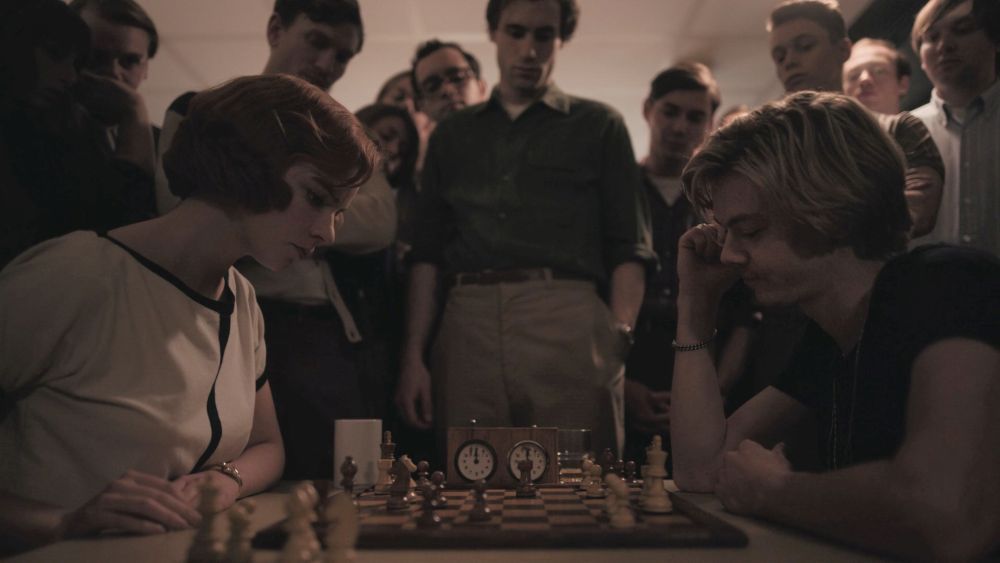 In the final round, we are only shown Benny playing 1.c4 and no other move. The scene changes to a different location and it is implied that Benny lost the game and US Championship too. Benny tells Beth that winner of US Championship gets invited to the Moscow invitational. The episode concludes with a Beth coming across a 'Fork'.

Episode 5 - 'Fork' is also an apt title. It is not about the tactical theme in chess, it is more in the sense of division of road, more like crossroads. There might be two or more than two choices, you have to choose what you feel is best for you.

The mini-series is adapted from The Queen's Gambit book by Walter Tevis | Photo: Penguin

Watch the entire episode of The Queen's Gambit Episode 5 - Fork on Netflix. The series is meant for adults only. So kids, if they want to watch the episodes for chess purpose, they can take an adult's help in watching only the chess elements of the mini-series.

The Queen's Gambit on Netflix