Savitha Shri B is just 13 years old but already has a rating of 2261. She gained about 300 Elo points in the past two months itself just by playing several strong independent tournaments in Spain. Her father Baskar, who used to be an electrician in Singapore, left his job to accompany his daughter in different events and ensured that she evolves into a world-class chess player. Savitha's quest for excellence has been and still is a path ridden with hurdles but the girl from Tamil Nadu is as resolute as ever. In this article we explore some of her recent successes and tell you how in two months she gained 300 Elo points to move from 1968 on the Elo scale to 2261.

Talking about the most talented up-and-coming female chess players of the country, Savitha Shri B from Tamil Nadu is definitely one who has shown quite a lot of promise in recent years. Savitha has been the National champion thrice in her age category, under-12 World Champion, scored her first WIM norm at the Grenke Open 2019 and lately has even pumped up her rating to a commendable 2261. About a month ago she was hovering close to the 1900 mark but playing some of the strong tournaments in Spain including the Sunway Sitges, Lorca Open, Elllobregat Open, and Roquetas Open helped her gain a whopping rating of around 300 Elo points. 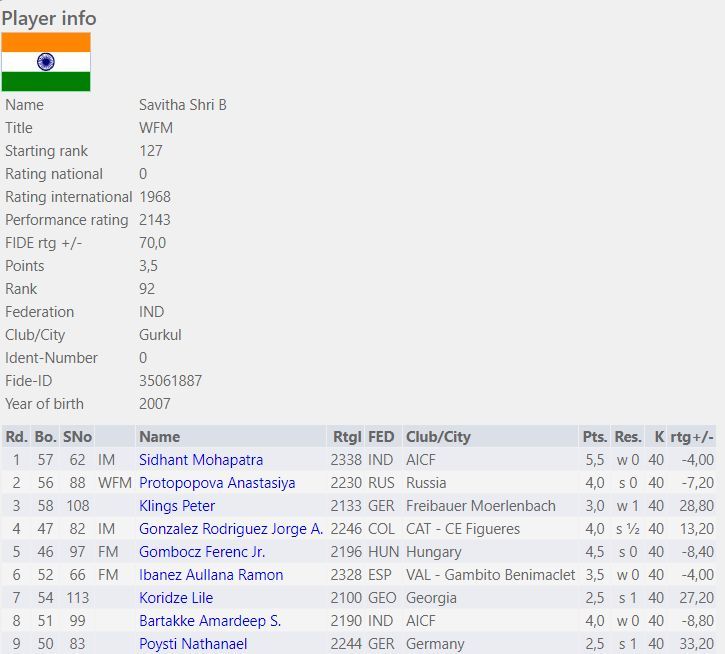 The first event was the Elllobregat Open in December where Savitha gained 70 Elo points. This took her to a live rating of 2038! 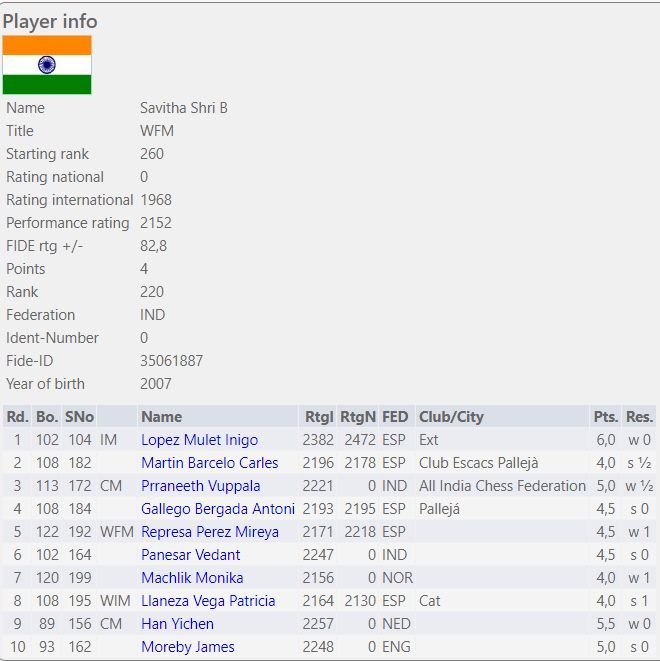 Roquetas De Mar proved to be the most fruitful of all the outings for Savitha. Here she gained an enormous 102 Elo points! Live rating: 2261 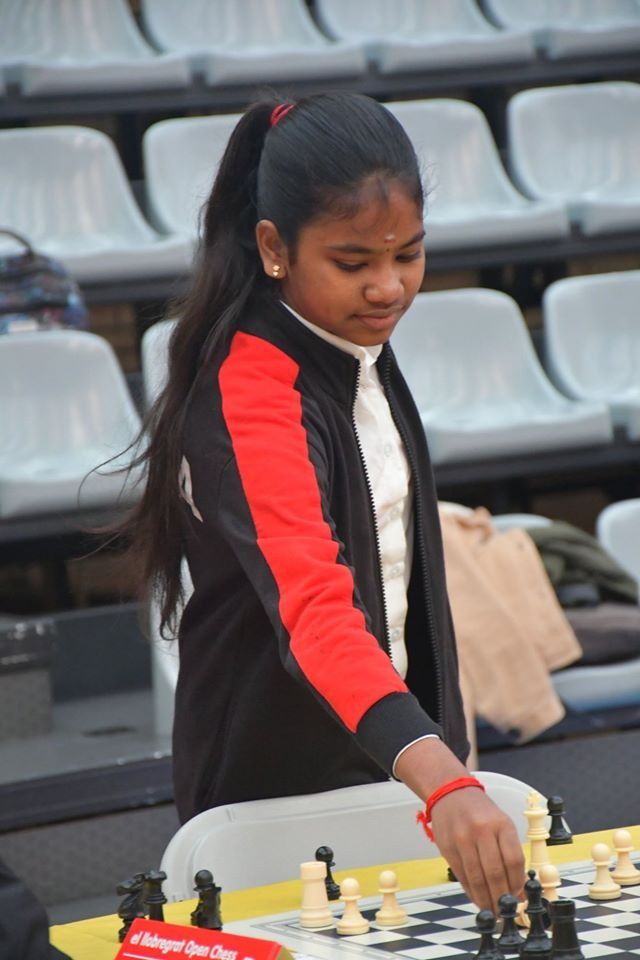 With this string of powerful performances Savitha is one of the youngest female players in Indian chess to cross 2250. The challenge will now be to sustain at this level in the tournaments to come. | Photo: Elllobregat Open 2019

Savitha is well known for her courageous play over the board but what has led her to improve so rapidly in the last few months? Well, we let her games do the talking! She sends us three of her recent games with detailed annotations which show the various aspects of her play. In some it is her tactical acuity that stands out and in others her will to fight till the very end. 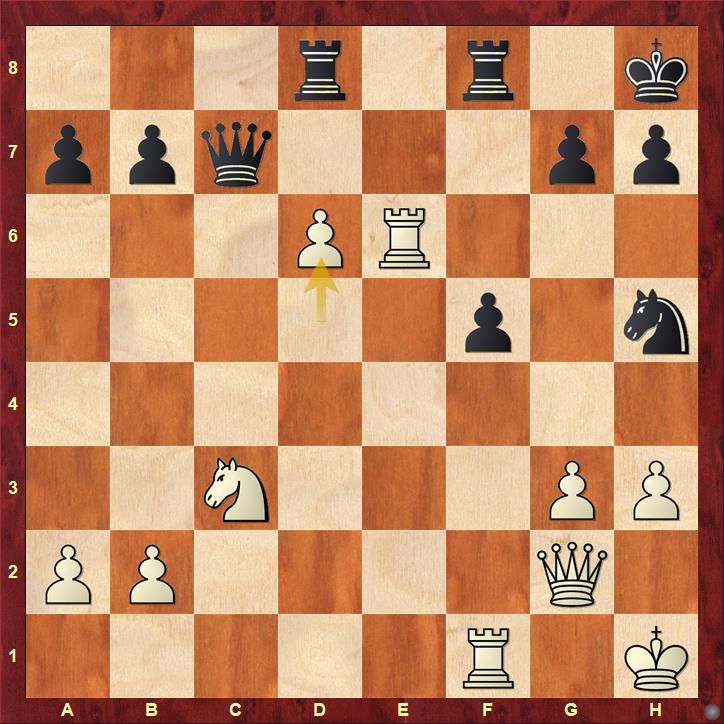 The Roquetas de Mar Open took place from the 2nd to the 8th of January 2020. Savitha was up against a really strong 2300+ opponent with the black pieces in the eighth round of the event and showed some impressive tactical alertness to register a very important victory. Sharp tactical vision and ability to calculate variations precisely are some of the basic things that you must cultivate in order to become a strong player. This game exactly shows how efficient Savitha really is when it comes to spotting tactics. 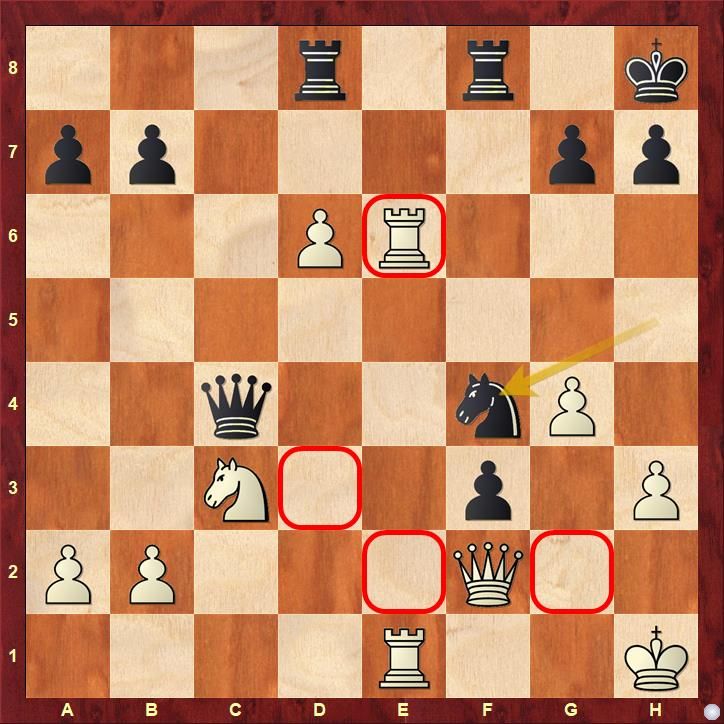 The game lasted only about ten moves from here. The Indian player executed her initiative flawlessly to built a direct onslaught on White's king!

Savitha's biggest success in Roquetas was perhaps drawing against the 2488 rated IM Mario Villanueva in round nine. This was a game where she showed her excellent defensive skills. It is usually easier to find good moves when your position is better than your opponent's but playing well under pressure is a trait of a champion.

Many players complain about losing or drawing in won positions. One of the common issues that chess players face is the inability to convert a winning advantage. Well, even the masters sometimes struggle with it. The third game we are going to see shows how Savitha maintained her cool in the ninth round of Elllobregat Open and capitalized on a slight positional edge to bring home the full point. 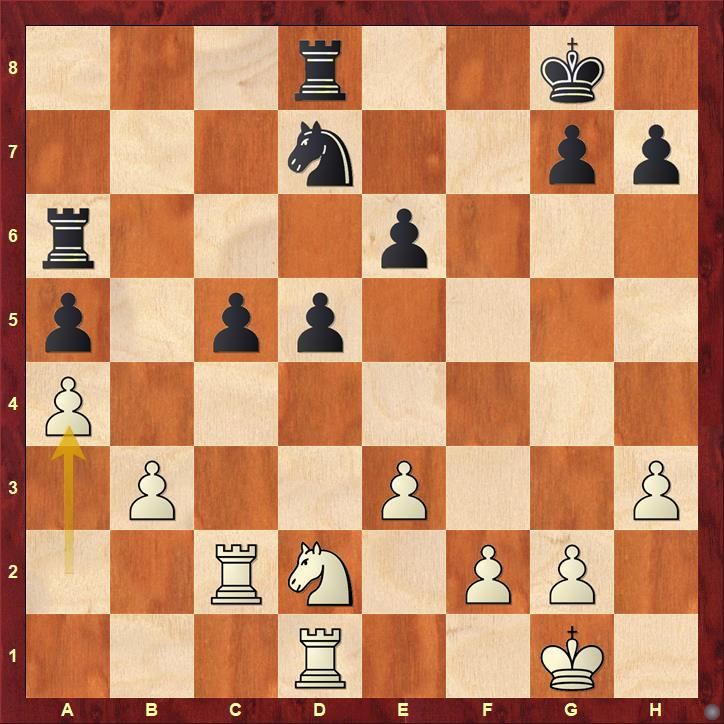 Savitha was playing Black in the above position and although the engines might evaluate the position to be equal, she did have some chances here. Her nicely placed pawns in the center gave her the much needed privilege to organize her pieces quicker than her opponent. 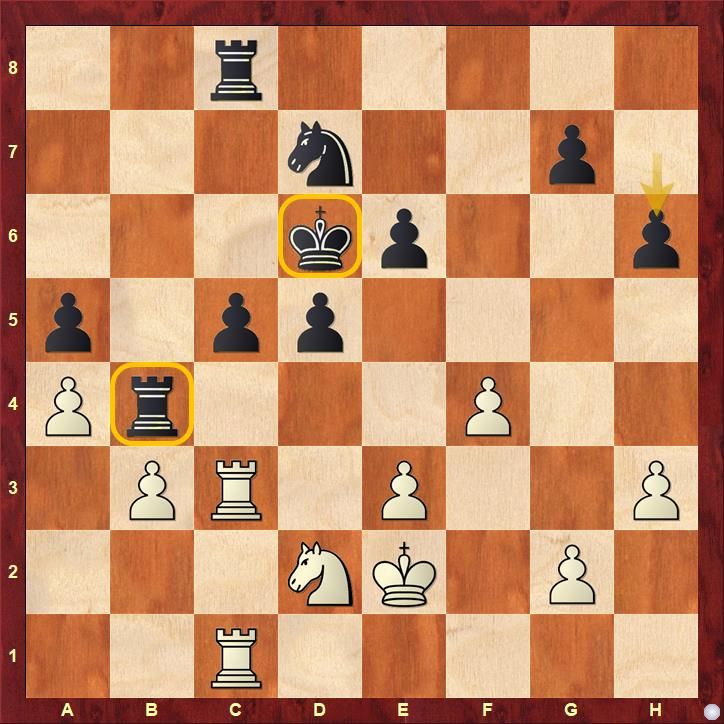 And Black soon made progress. The weak b4 was soon occupied and the king was brought to the fore. Meanwhile White could only do little. 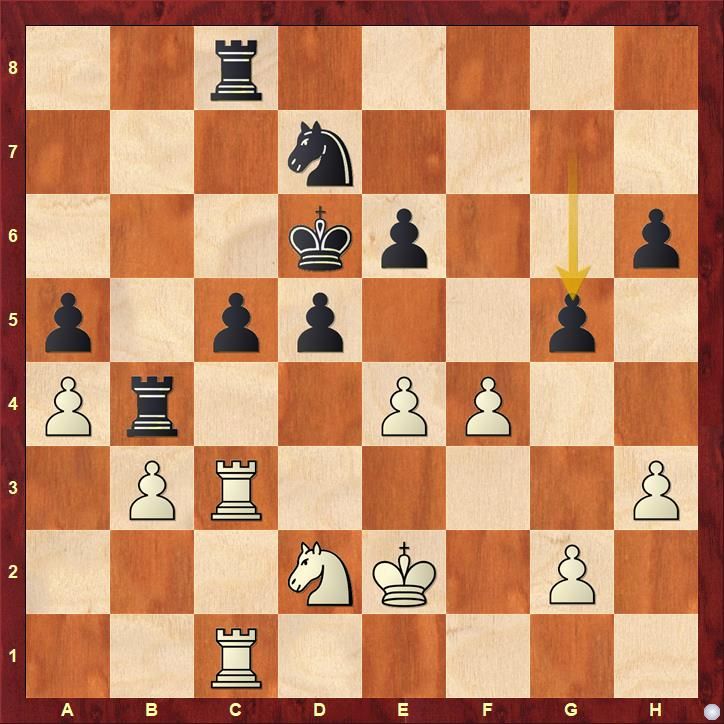 This was a critical moment. White could have equalized here simply with fxg5 but in the game f5 was played which allowed Savitha to grab a pawn. 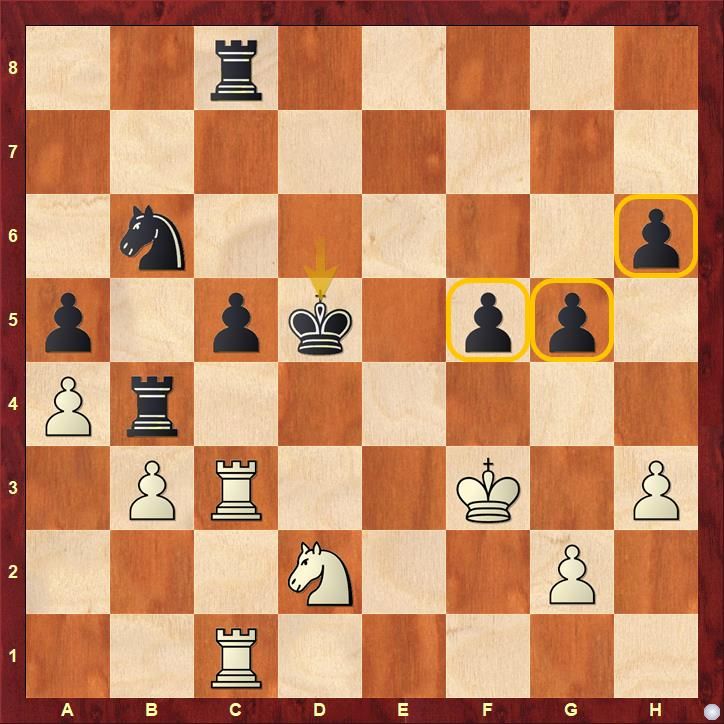 Black therefore got a comfortable kingside majority as well. White made the next error immediately by offering the trade of knights with Nc4, the resulting rook pawn ending was only worse. 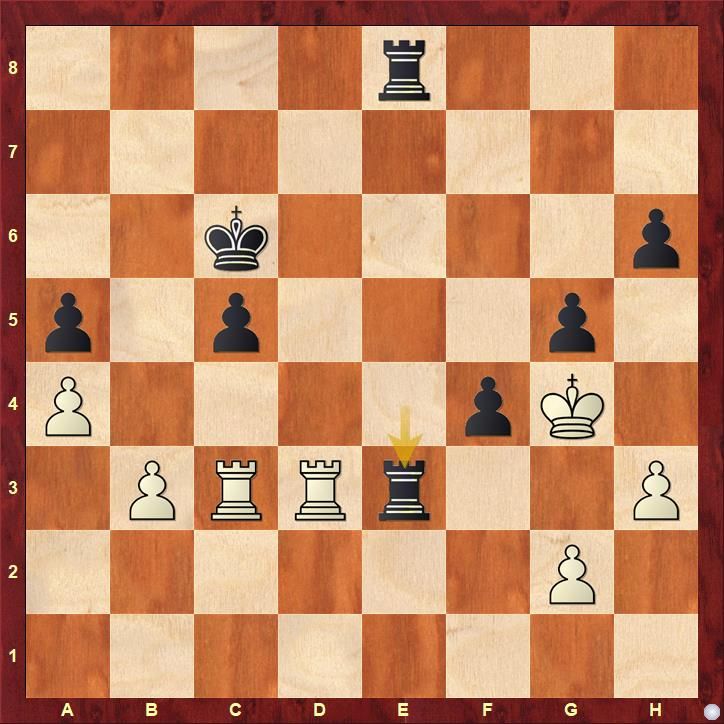 Savitha was already winning here but Kg4-h5 only quickened matters as after Rxd3 Rxd3 Re3 White was losing more pawns.
From January 2019 to December 2019 Savitha was stuck in the 1900 zone. Gaining 300 Elo points in four events was a much needed breakthrough for her. | Photo: Elllobregat Open 2019
Savitha's father has been her biggest support. He left his job as an electrician in Singapore so that her daughter can pursue her chess career with complete vigour 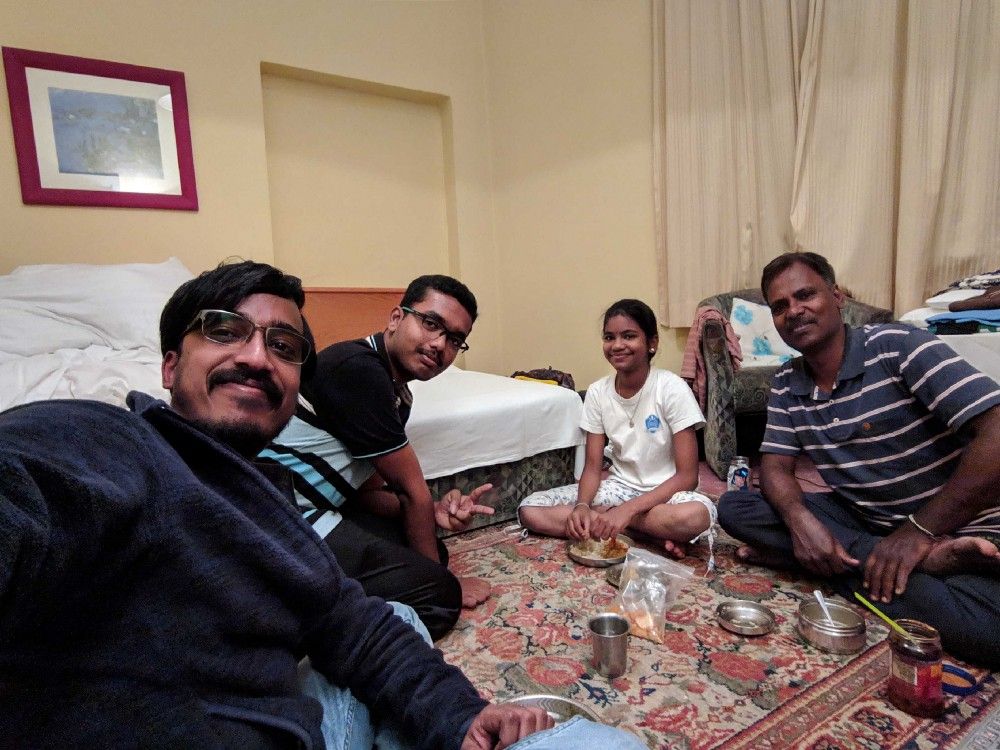 Deepan Priya, who lives in London came forward to help Savitha. He was impressed by the youngster's talent and raised funds for her - a massive 5036 pounds. This money surely helped the youngster to play more events.

Why Savitha would become one of the strongest players in the world
How talented is the world under-12 girls champion?
The battle of two future champions - Savitha and Sahithi
Under-11 national champion Savitha Shri shares her best game from the tournament

Walking a few steps with a future chess queen