Saint Louis Rapid and Blitz 2020: Carlsen and So are the Co-Champions

Both reigning World Champions Magnus Carlsen and Wesley So scored 24.0/36 to become Co-Champions at Saint Louis Rapid and Blitz 2020. While Carlsen scored 6.0/9 on the final day, So scored 6.5/9 including scoring three consecutive victories in the final three games. Both of them won US$45000 each. In their direct encounter, Carlsen came out at the top against So. It is absolutely poetic and just that both Carlsen and So finished at the shared first place. Nakamura finished sole third with 21.0/36. Harikrishna had a tough final day as he managed to score only 3.0/9, finishing the tournament with 15.5/36 at shared seventh place along with Xiong. Harikrishna won US$14000. Photo: Saint Louis Chess Club Live stream

"I would like to thank Ian... I offered a draw at some point because it was very complex, but he declined, so..." - Wesley So after finishing shared first with Carlsen at Saint Louis Rapid and Blitz 2020. So won the last three games in-a-row beating Nepomniachtchi, Aronian and Harikrishna to finish with 24.0/36. "I will play him in Chess960. But I won't play him in a Blitz game anymore. I am done for that." - So's innocent reply with all smiles to the hypothetical question of - if there were tie-breakers against Carlsen for the first place, which format he would have chosen.

Carlsen and So are the Co-Champions of Saint Louis Rapid and Blitz 2020 | Photo: Saint Louis Chess Club

"Yesterday I thought I didn't play very well but I scored quite a lot of points. Today I was frankly just not in good shape at all. I was extremely tired and I didn't sleep well so I didn't expect to play even remotely well today. With that in mind, I am actually pretty happy with the result that I managed to put up." - Carlsen on having a not-so-smooth tournament. The World Champion picked regular chess as an answer to the same question that was asked to So about hypothetical tie-breaks. "Wesley played a fantastic tournament, he made +4 in both formats and lost very very few games, won three games in-a-row. That's an amazing performance. You can always tip your hat to that." - Carlsen appreciated So.

Harikrishna tried to create some chances in the endgame against Dominguez. 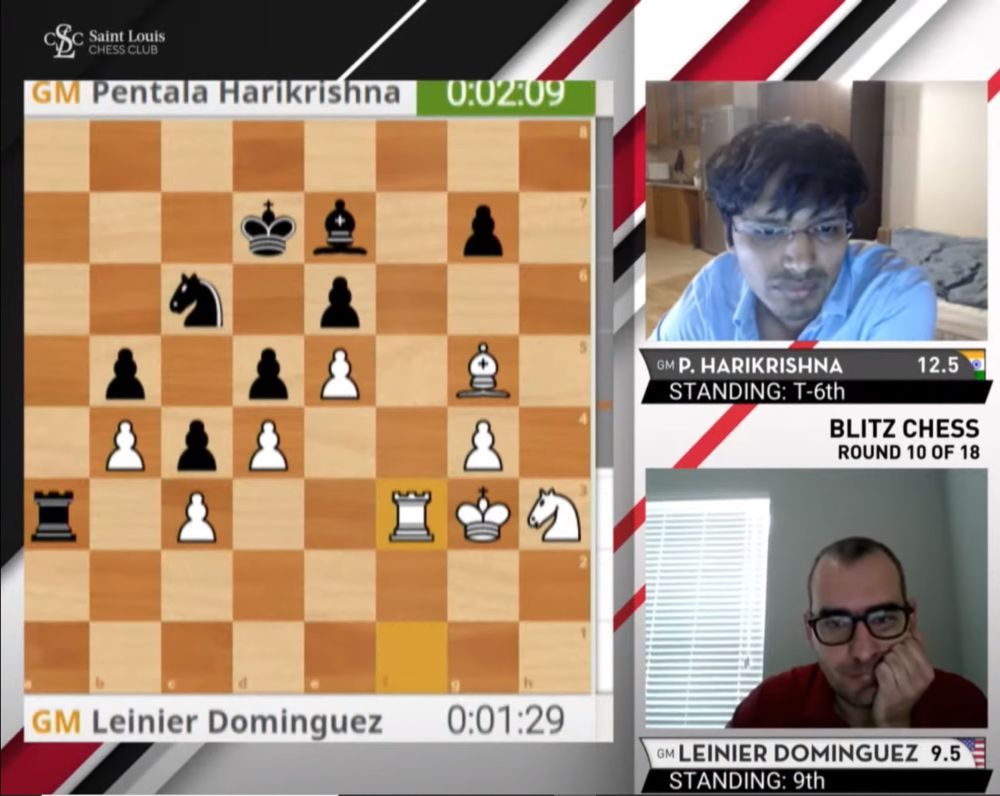 Black can take on either b4 or d4 to create some winning chances. Which one is the right capture?

Carlsen arriving a full minute late did not help his cause as he made an uncharacteristic positional mistake. 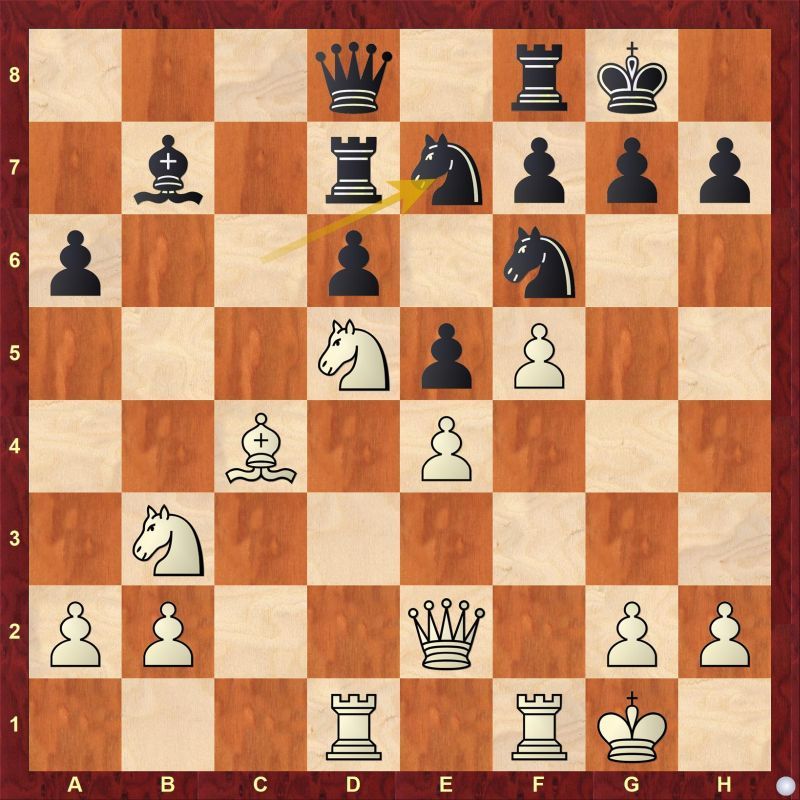 Find out why 17...Ne7 is mistake and how white should capitalize on it. Nakamura did the obvious and wrapped up the game in the next six moves. 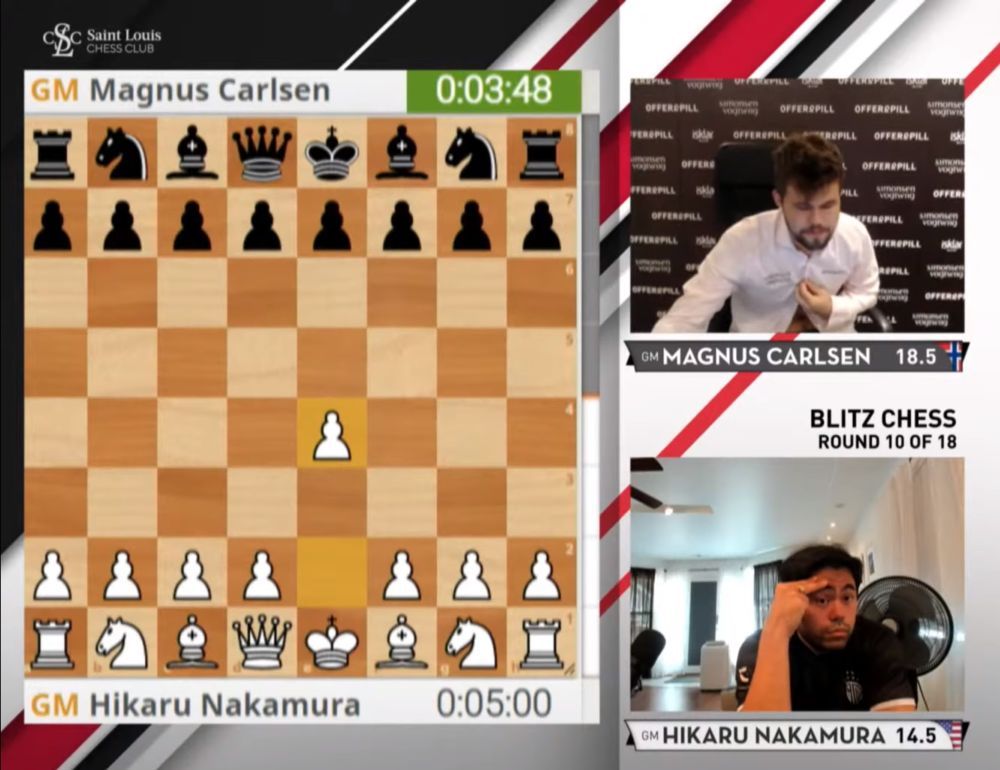 Carlsen arrived a full minute late to Round 10 game against Nakamura and he buttoned his shirt while making the first few moves | Photo: Saint Louis Chess Club Live stream

Aronian got Firouzja in a complete bind. Although he let the young one loose for a moment but eventually scored the full point without much difficulty. 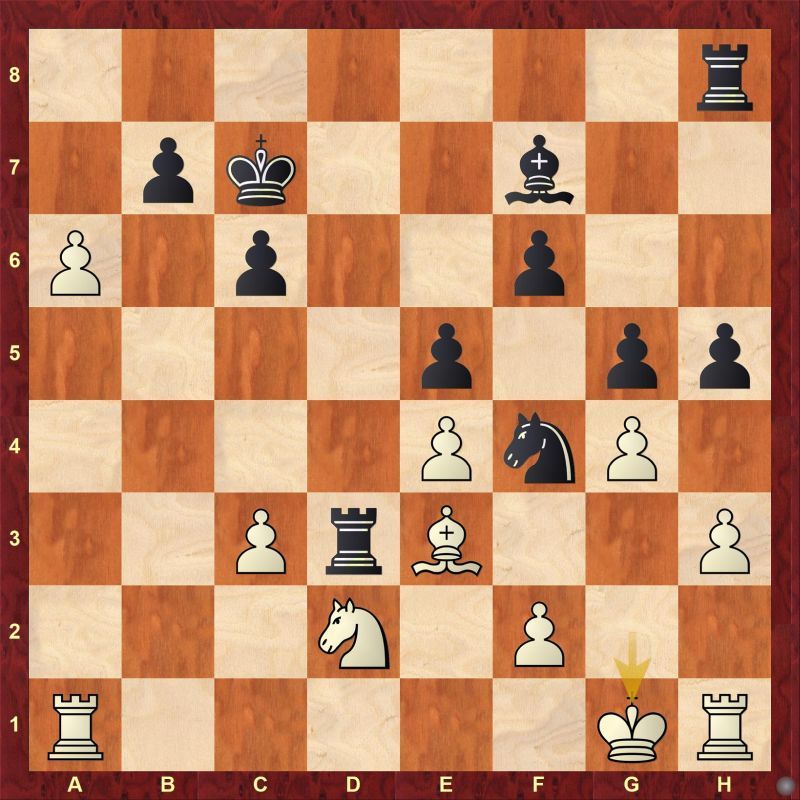 Find out the best continuation for black after 28.Kg1

Round 11: Carlsen escapes a danger

Carlsen once again landed himself in a jeopardy in the endgame against Nepomniachtchi. 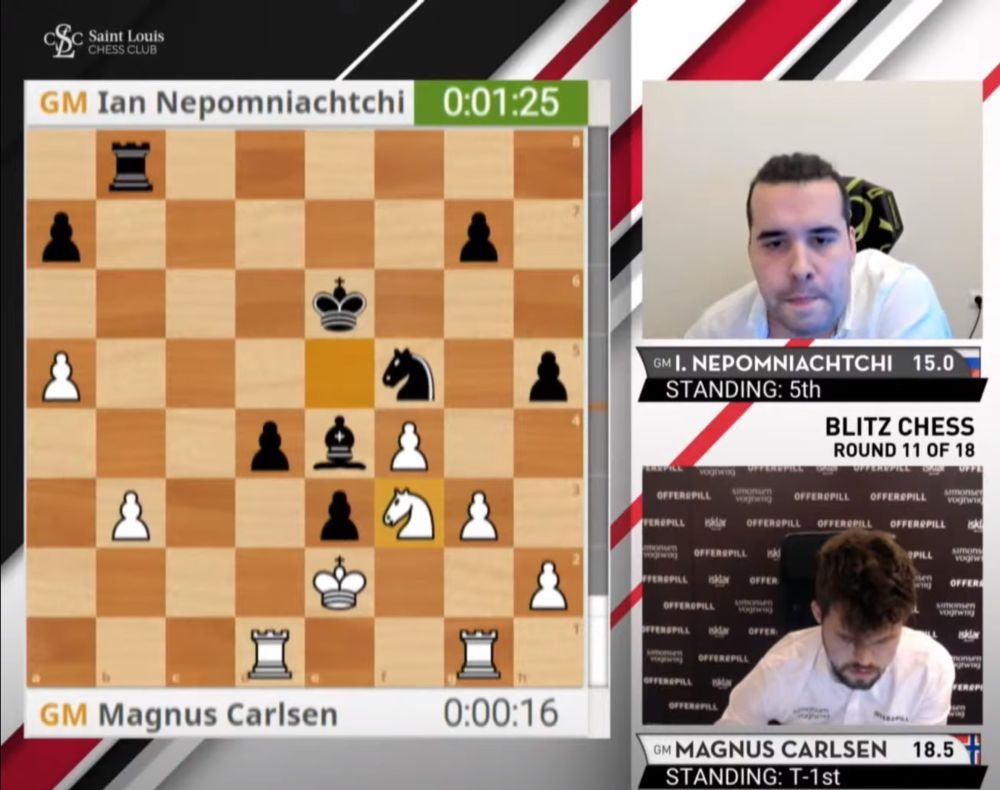 Perhaps one of the best opportunity Nepomniachtchi had against the World Champion in the game was when 36.Nf3 was played. Find out the best continuation for black here.

Aronian played Bishop vs. Knight endgame beautifully to win against Grischuk in Round 11. 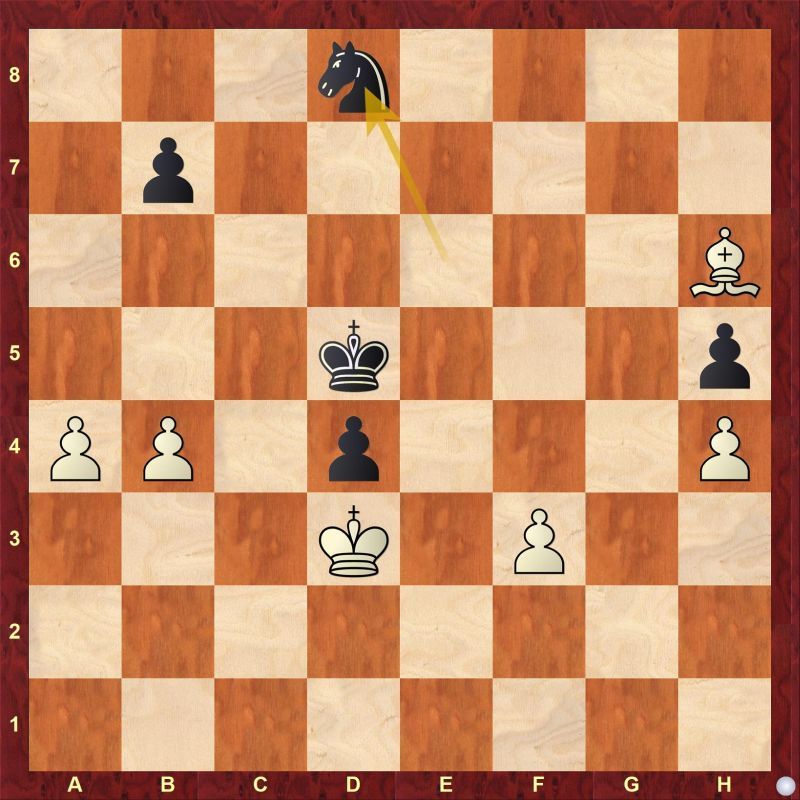 Find out the winning plan for white here.

Round 12: Battle of the World Champions

In Round 12, the top two at the standings table, Carlsen faced So. World no.1 had no trouble converting an advantage after the Fischer Random Official World Champion erred in the endgame. White could have won a bit earlier. 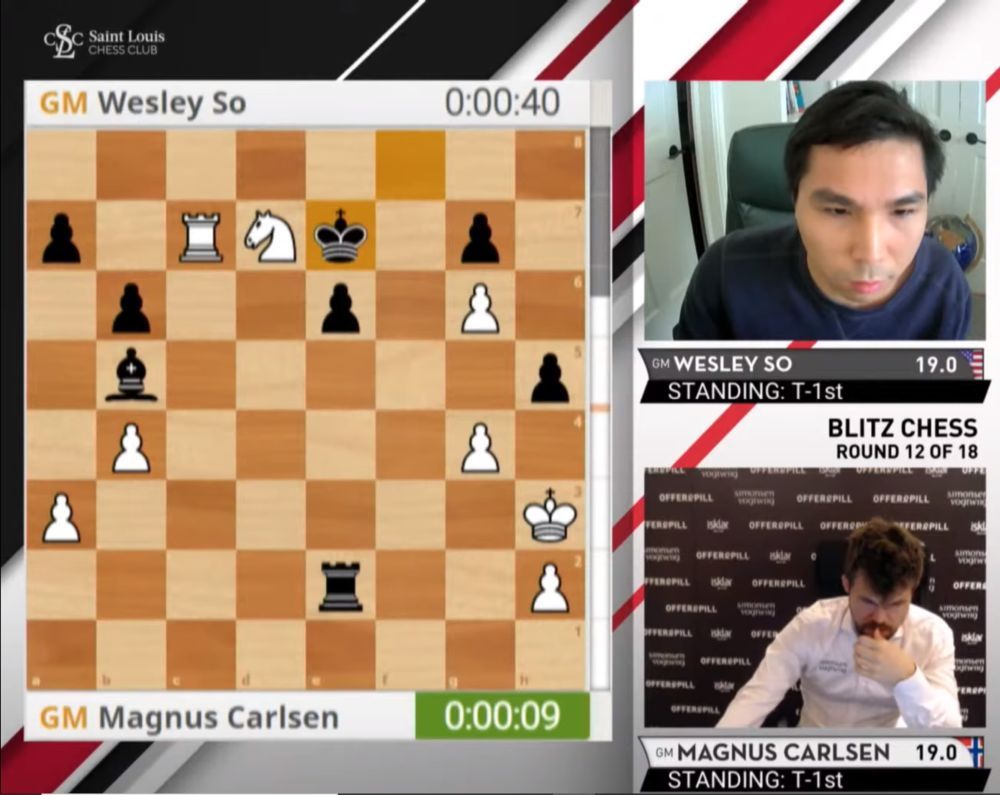 Find out why 29...Ke7 is a blunder and what black should have played instead. White continued with 30.Nxb6+ which is also winning but there was a cute finish.

Nakamura swindled Dominguez in the endgame. Dominguez was in total control of the position and correct play could have rewarded him a full point but alas it was not meant to be. 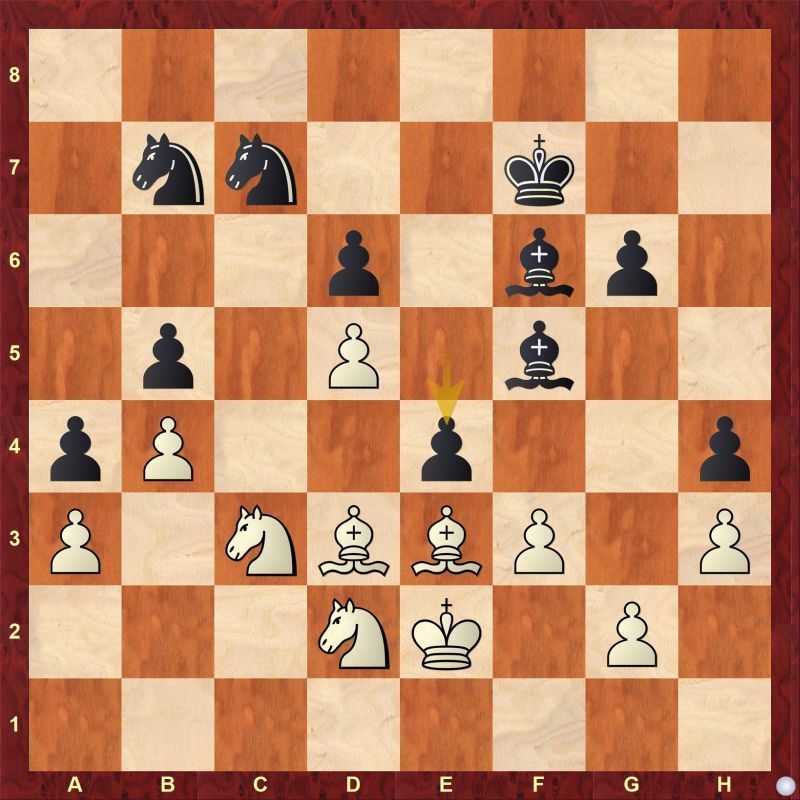 Nakamura's last attempt at a desperado with 52...e4 actually does not work if white finds the correct continuation. What was the best continuation for white here?

So scored a fine win against Dominguez in 32 moves. 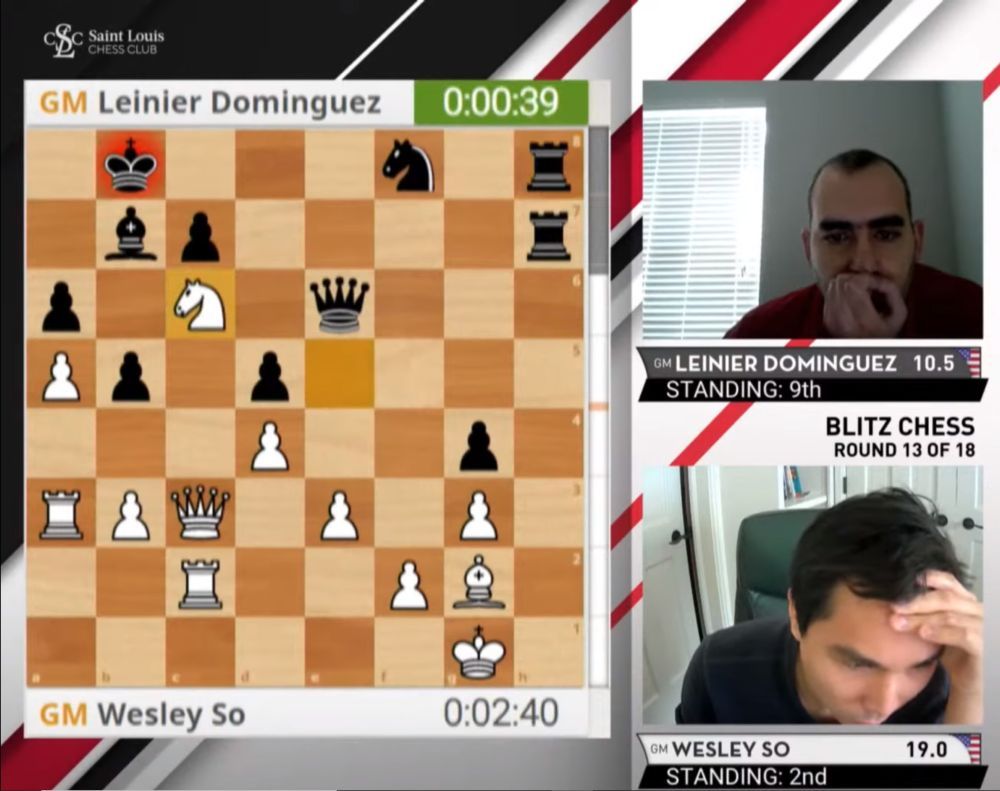 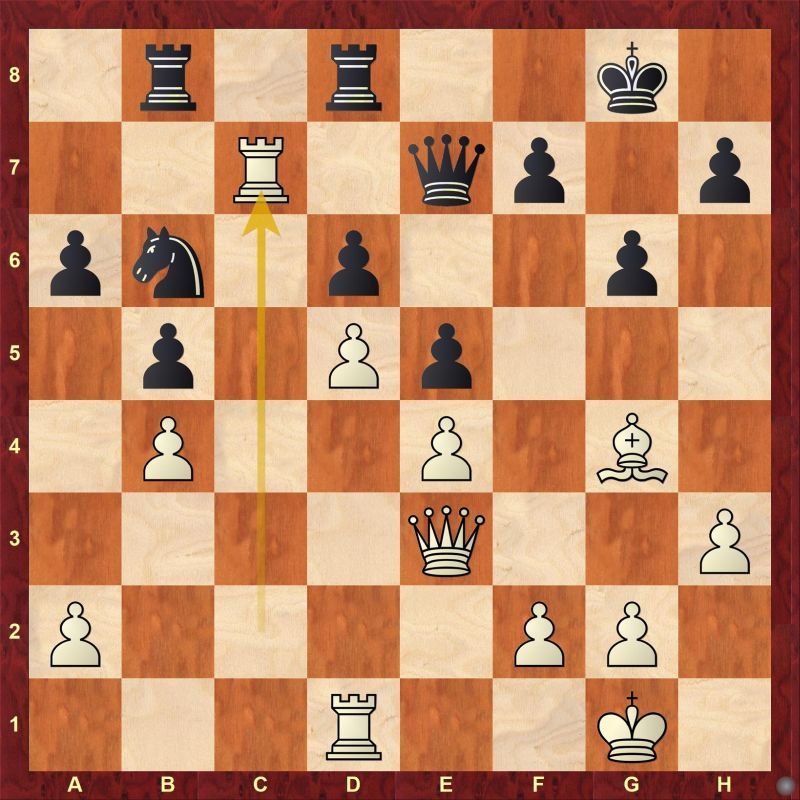 Firouzja was on the brink of another major victory. This time against Nakamura, but unfortunately for him, he wasn't able to seize the opportunity. 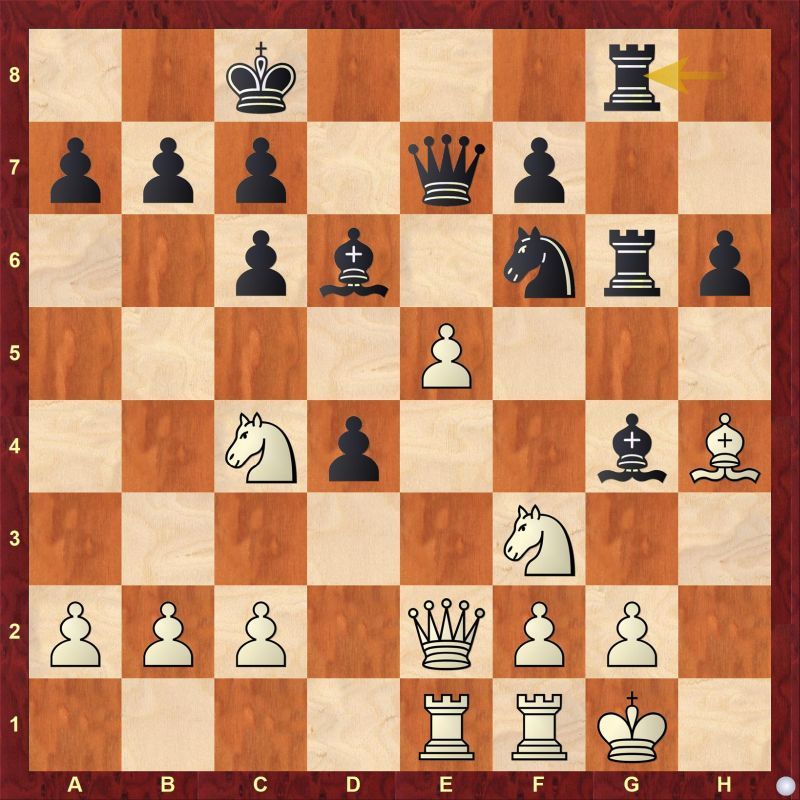 The game continued with 19.Bg3. Find out what was the better continuation for white here. 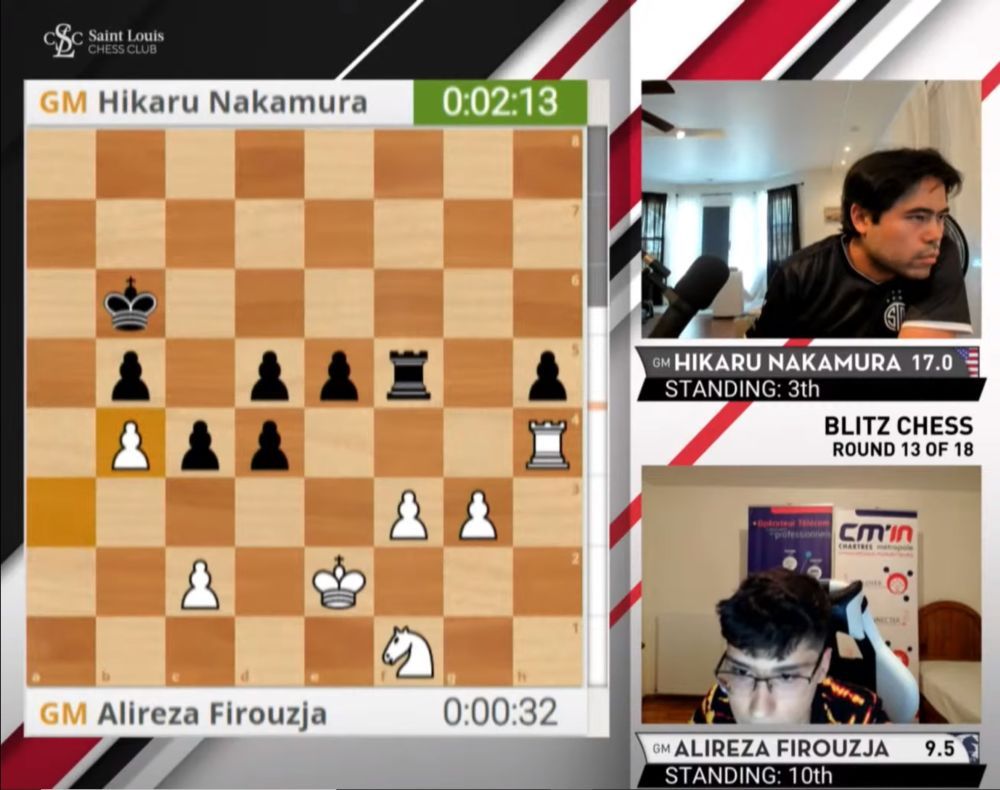 Things started to get slowly out of hand for white as black's pawn mass became more menacing.

Nepomniachtchi trapped his own queen and lost the game against Xiong in just 23 moves. 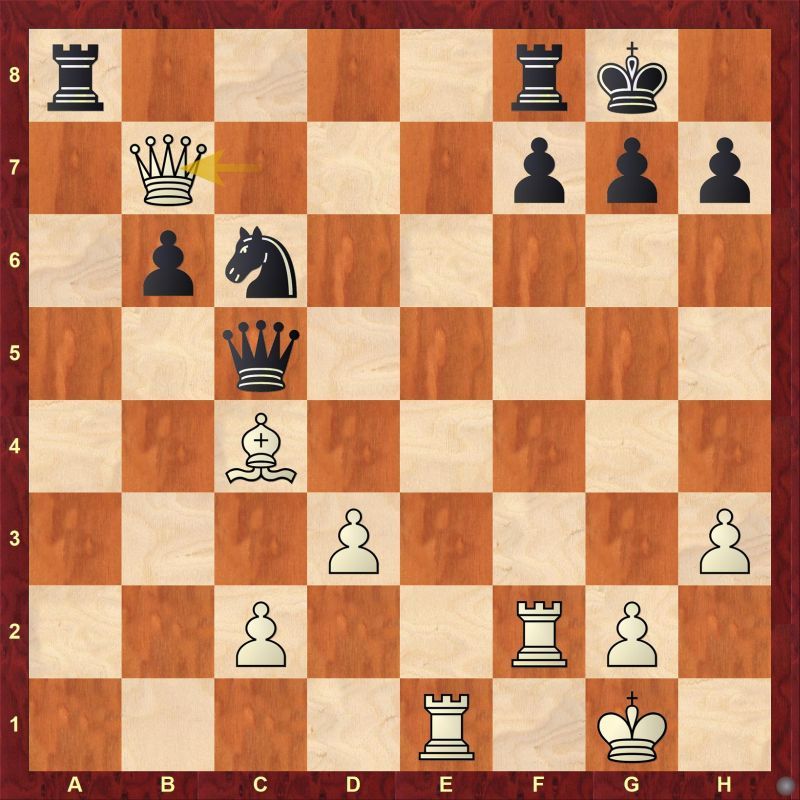 Round 15: Carlsen avenges his loss

Harikrishna made an unforced error by sacrificing a piece, probably anticipating a lot of attack. Thus allowing Carlsen to avenge his loss of the previous day. 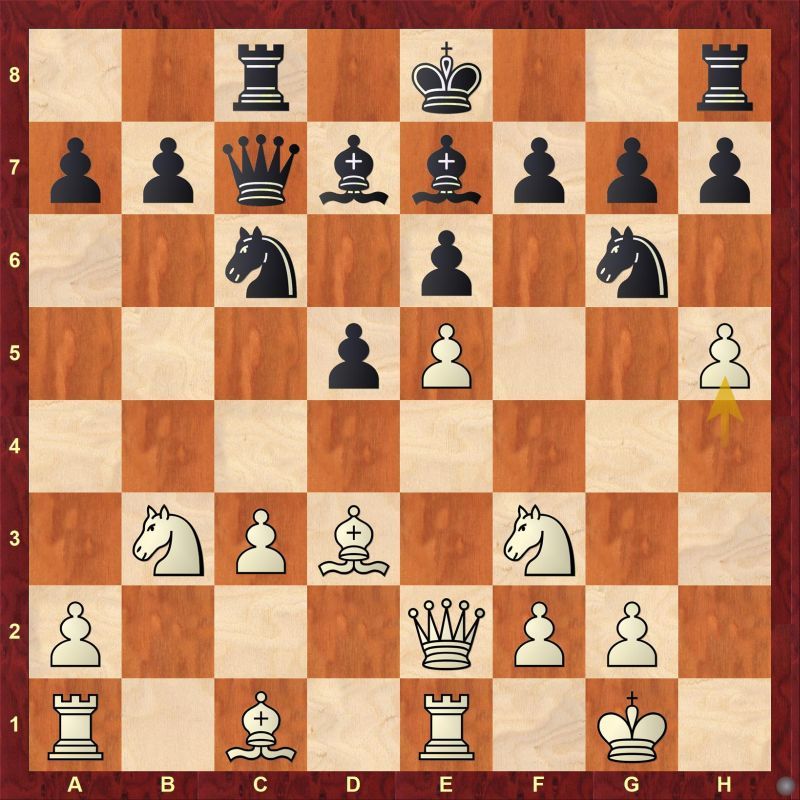 Where should black move the knight after 14.h5 ?

Round 16: Firouzja held Carlsen to a draw

Firouzja managed to hold Carlsen to a draw with some solid play. 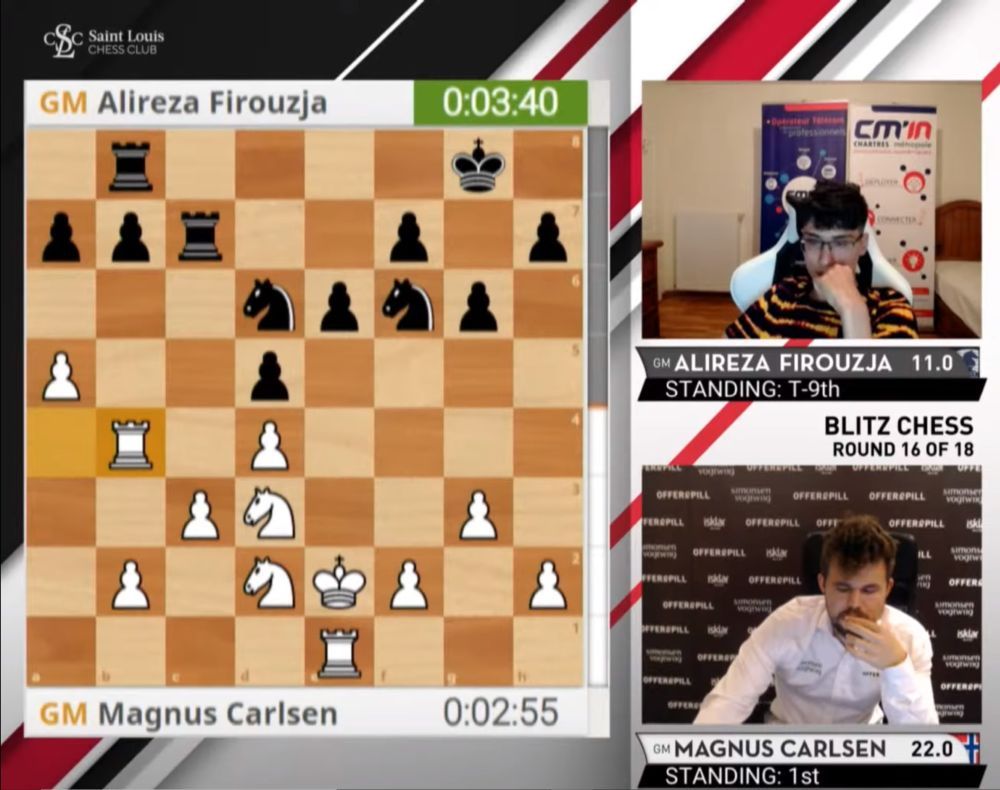 Meanwhile So beat Nepomniachtchi with some attacking game. After losing with 1.b3 on the final day of the Blitz, Nepomniachtchi switched to Vienna Game, much to his chagrin that did not go as well as he would have liked. 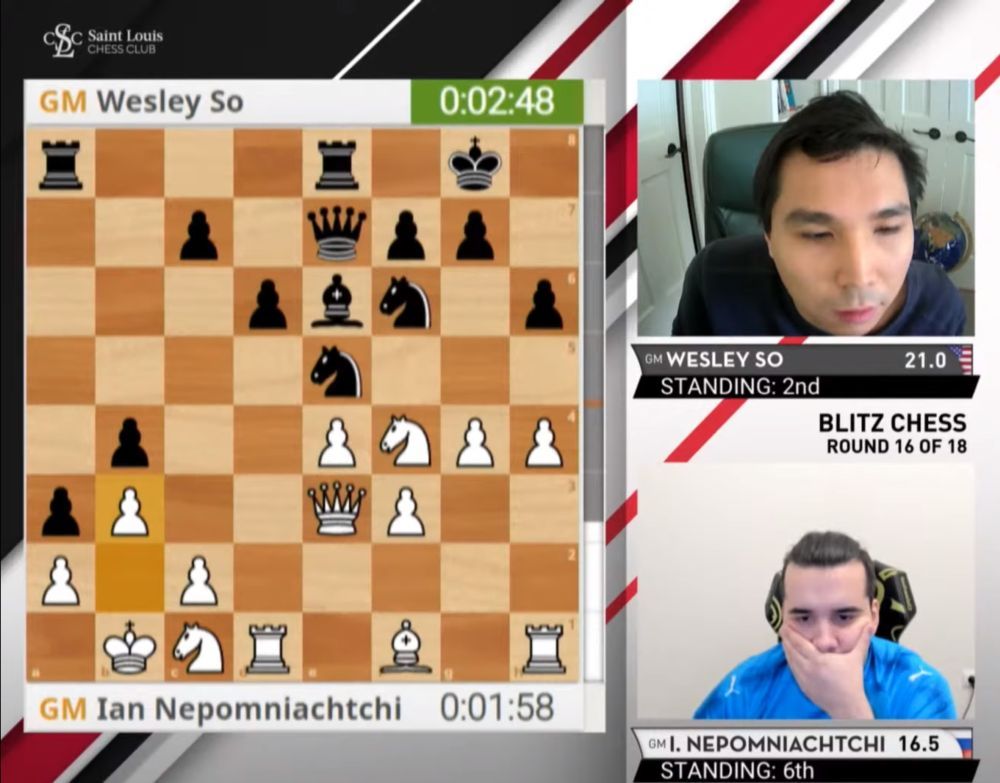 Black has a firm control of the position and a clear advantage too. How should black continue after 20.b3 ?

Harikrishna beat Xiong again. Although the American blundered a piece but Harikrishna already had an advantage before that.

Both Carlsen and So secured top two positions before the last two rounds with 22.5/34 and 22.0/34 respectively. The last two rounds were the decider to determine who would finish and second among them. So beat Aronian in the penultimate round without any difficulty. 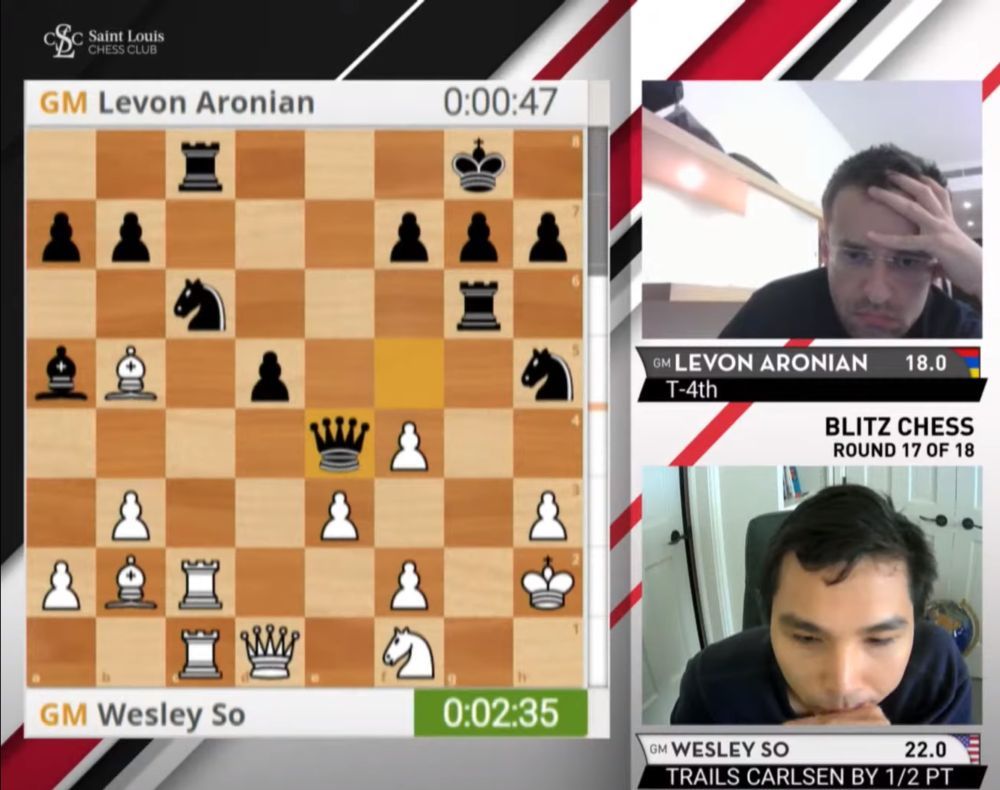 Firouzja scored a fine victory over Grischuk. He capitalized on a tiny error by the former World Blitz Champion and rest was just a matter of technique. 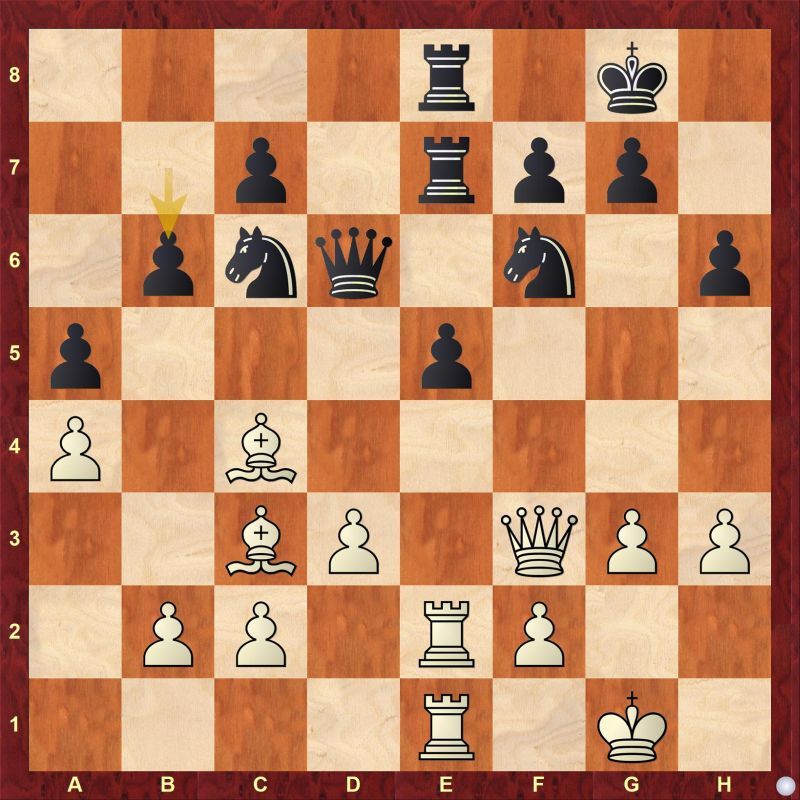 Find out how should white continue after 20...b6

Nepomniachtchi perhaps should have stuck with 1.b3 as he returned to his trusty Larsen for the final game and guess what - he won. This time worked against Firouzja.

For anyone who follows Nakamura on twitch or youtube, they are quite familiar with Bongcloud Opening. However Nakamura debuted this opening for the first time in Saint Louis Blitz tournament. He brought his creativity and it worked as he won the game. A lot of people started talking about the opening too, but most importantly the World Champion explained a whole lot of variety of Bongcloud Opening. 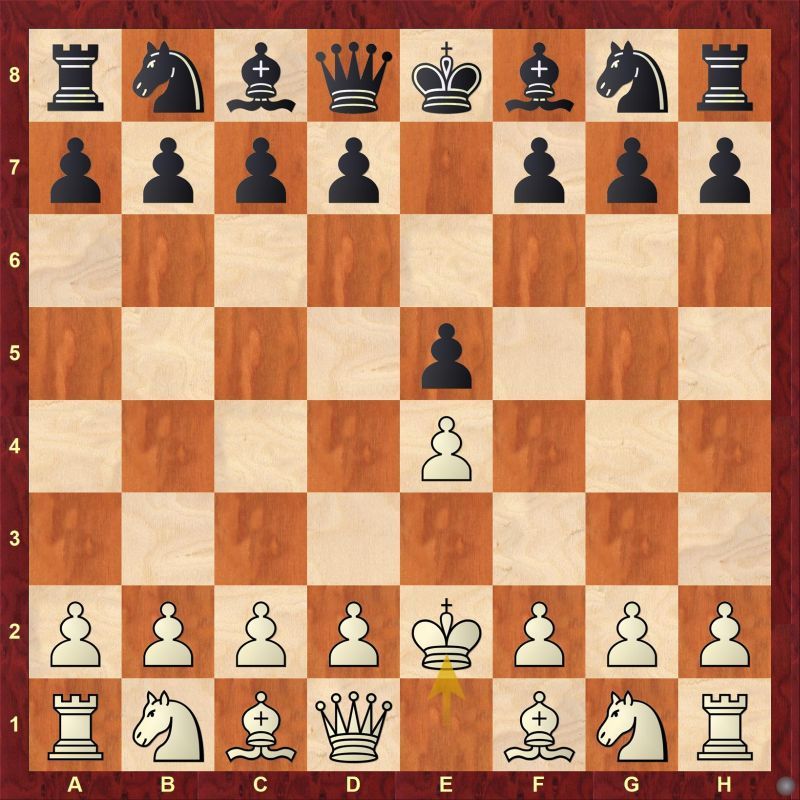 It's not always about theory. Sometimes you have to outplay your opponent psychologically and element of surprise works a lot especially in the faster time controls. 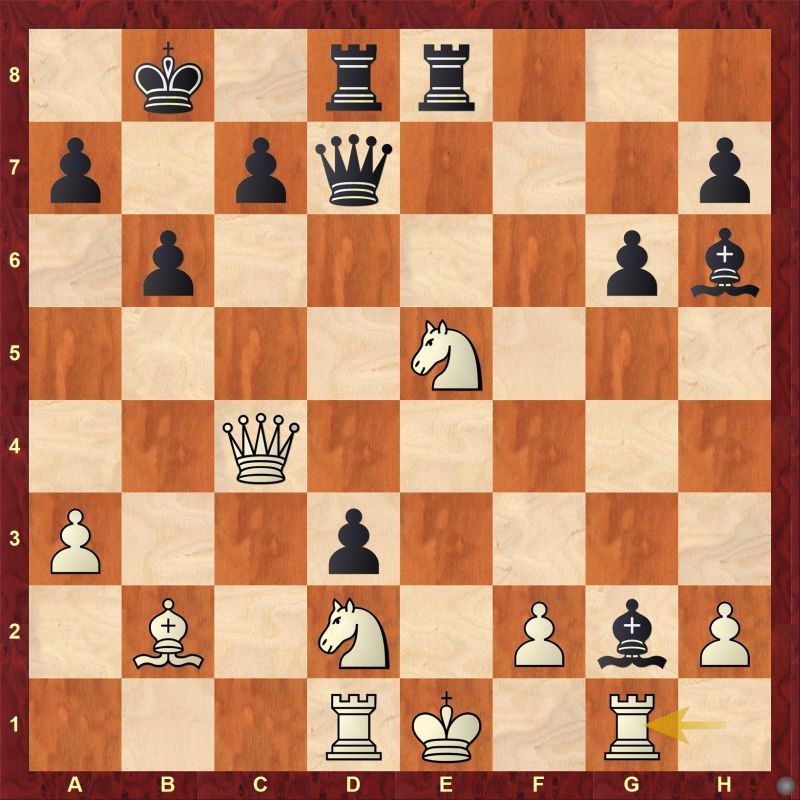 Although Nakamura got into fair amount of trouble but his opponent was unable to capitalize on it.

So beat Harikrishna in the final round to finish shared first with Carlsen at 24.0/36. 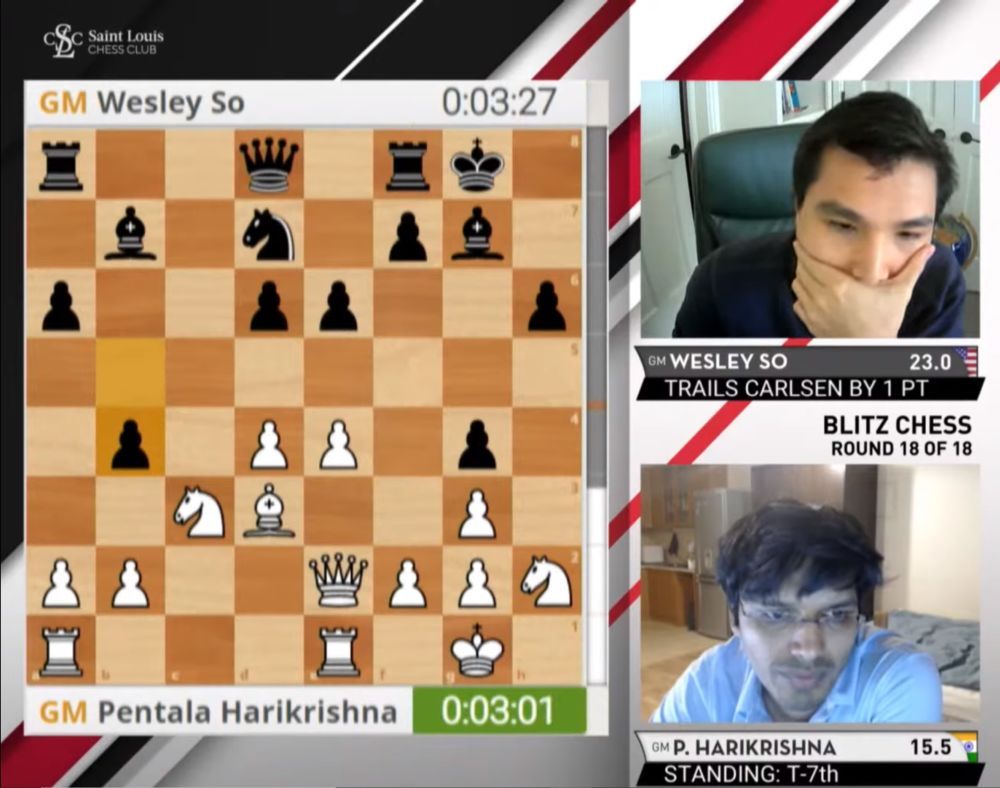 So went all in with g4 and b4 | Photo: Saint Louis Chess Club Live stream

Final Standings after Blitz Round 18

Carlsen is back at the top, So not far behind | Photo: Saint Louis Chess Club

• In each rapid game, a win is worth 2 points, a draw is worth 1 point and a loss is worth 0 points.

• In each blitz game, a win is worth 1 point, a draw is worth ½ point and a loss is worth 0 points. Games will not be rated.