The third day of Saint Louis Rapid belonged to Wesley So as he went on two score two wins after making a draw with Nepomniachtchi and take the sole lead with 13.0/18. Grischuk beat Carlsen in the final round of the Rapid stage which made sure Carlsen finish sole second, a point behind So at 12.0/18. Both Grischuk and Nepomniachtchi finished at shared third place with 10.0/18. Harikrishna finished at shared fourth place with 9.0/18. The tournament will continue with a total of 18 rounds of Blitz taking place today and tomorrow. Blitz Round 1 starts tonight from 11:30 p.m. IST. Photo: Saint Louis Chess Club Live stream

Wesley So had a fantastic day to conclude the Rapid part of Saint Louis Rapid and Blitz. He won two games and drew one to finish with 13.0/18. This is what the Fischer Random Official World Champion had to say about his chances of winning the event - "Well it's always hard to win the tournament when Magnus is around, unless he is in really bad shape. There are still a lot more games (18 games). Anything can happen in blitz." Carlsen finished the day with 12.0/18. He lost the last game against Grischuk which cost him the first place finish. Grischuk and Nepomniachtchi finished at shared third place with 10.0/18, although Grischuk in his usual style joked about his aim is to finish at ninth place in the tournament, because last place finish is bad. 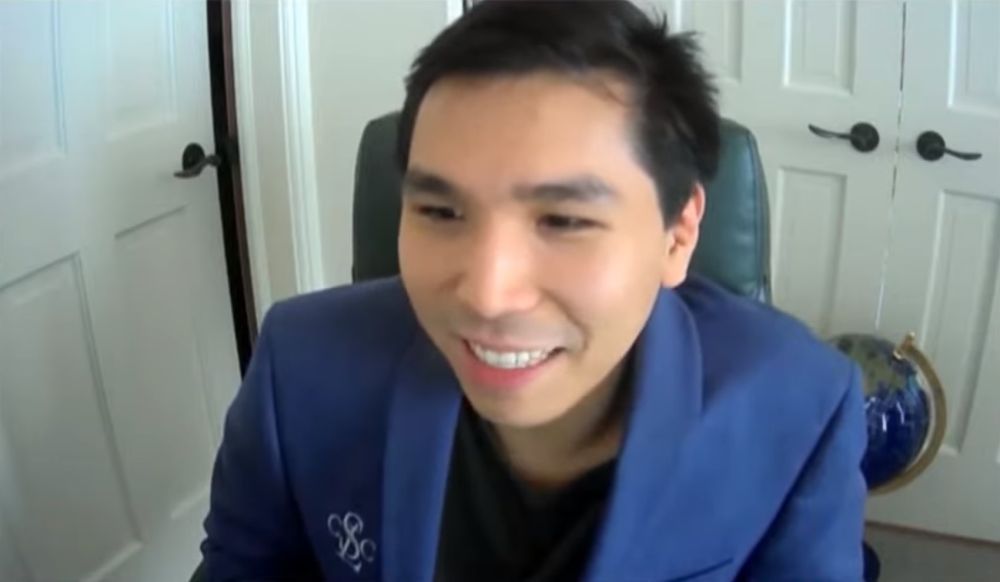 Carlsen made sure he had backups of his internet | Photo: Saint Louis Chess Club Live stream

Firouzja played some wacky chess against Carlsen and that certainly did not help his case. 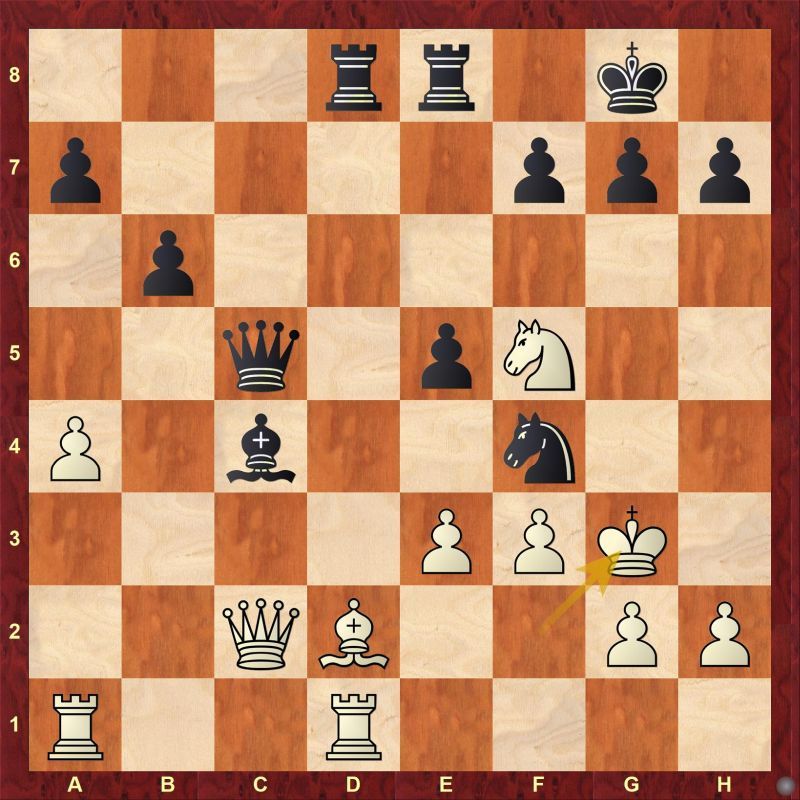 White almost self-destructed in the game. 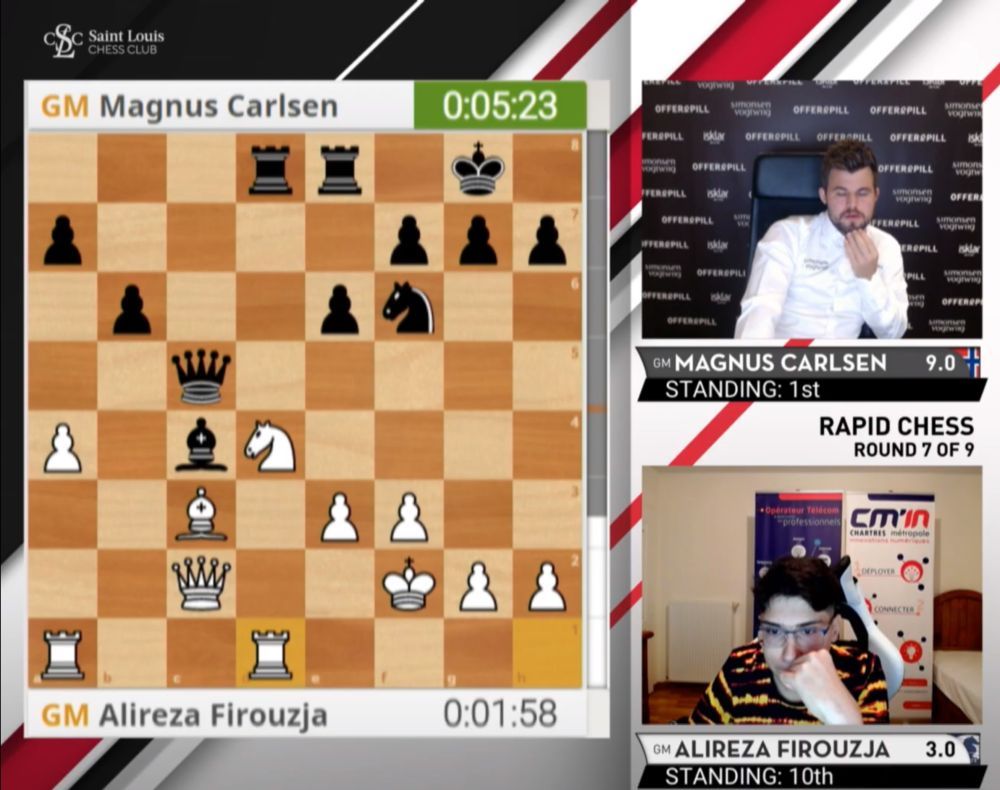 Dominguez had a seemingly equal position until he made a mistake allowed Grischuk to have a winning King and Pawn endgame. 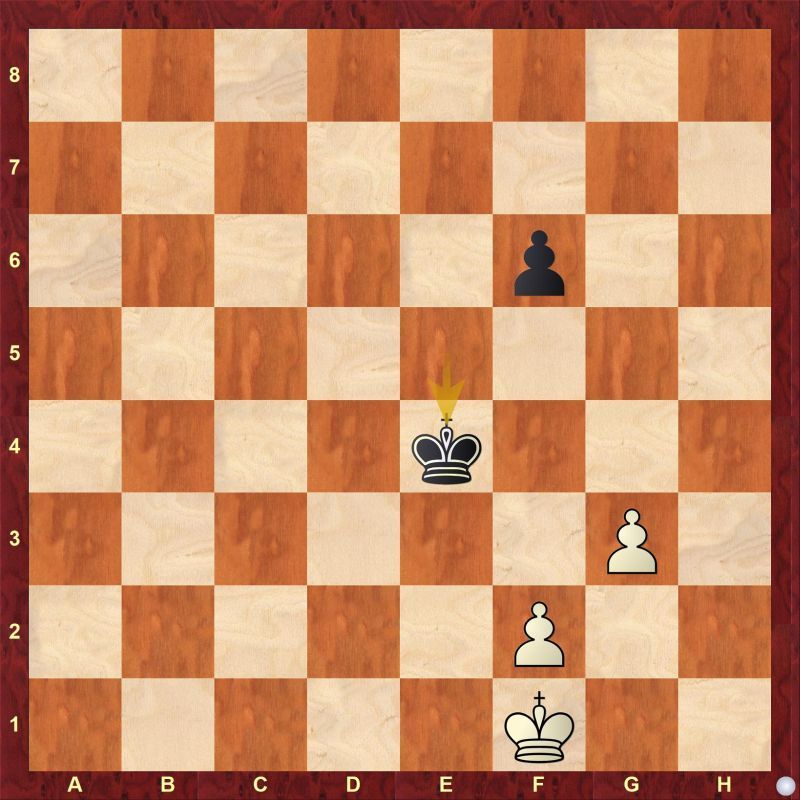 Find out the winning plan for white after 69...Kxe4 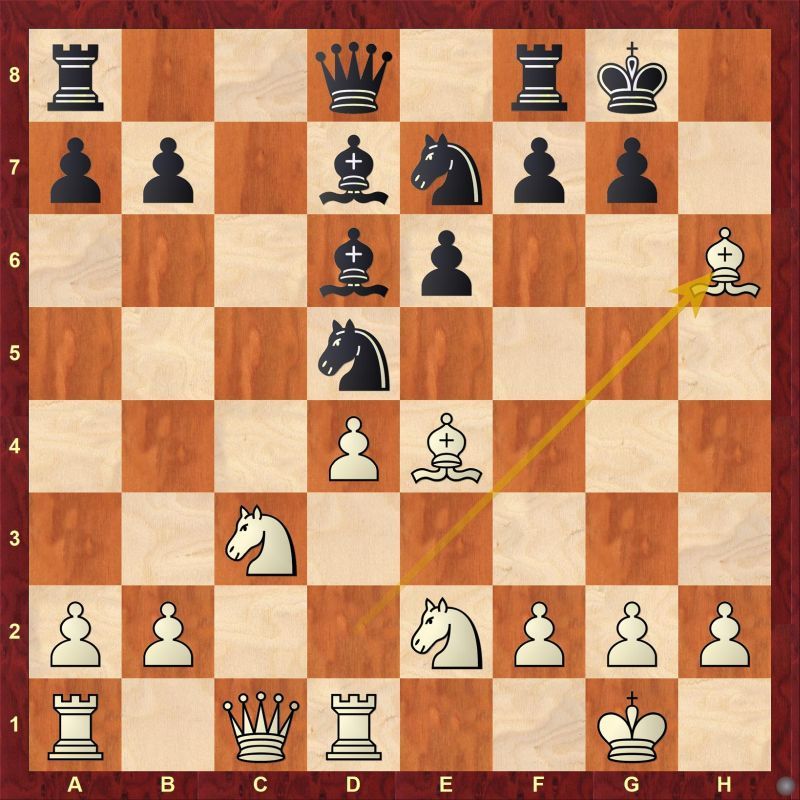 Of course 16.Bxh6 is tempting but there is nothing definite. Nakamura managed to defend well, he was never in any kind of real danger and Aronian only got three pawns as a compensation for a piece which didn't turn out to be enough to even salvage a draw. 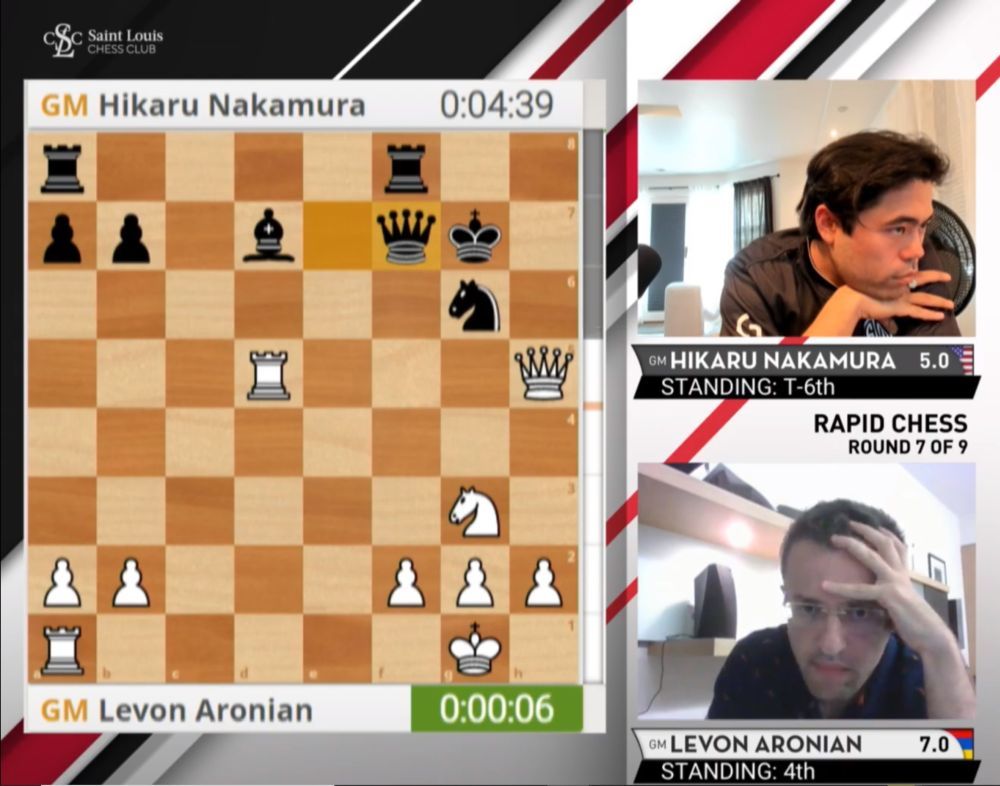 Xiong made some questionable choices which resulted in him getting a very passive position in the middlegame. 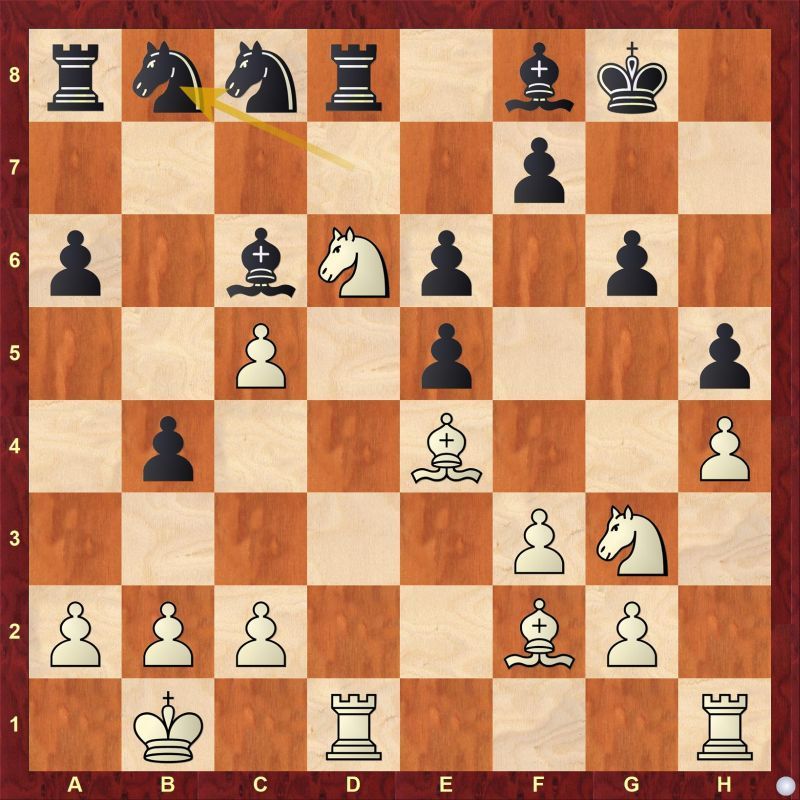 Soon afterwards Harikrishna gained a pawn and then Xiong lost one pawn too many which eventually cost him the game.

Round 8: Xiong held Carlsen to a draw

American prodigy Jeffery Xiong played fantastic and got a brilliant position against Carlsen. 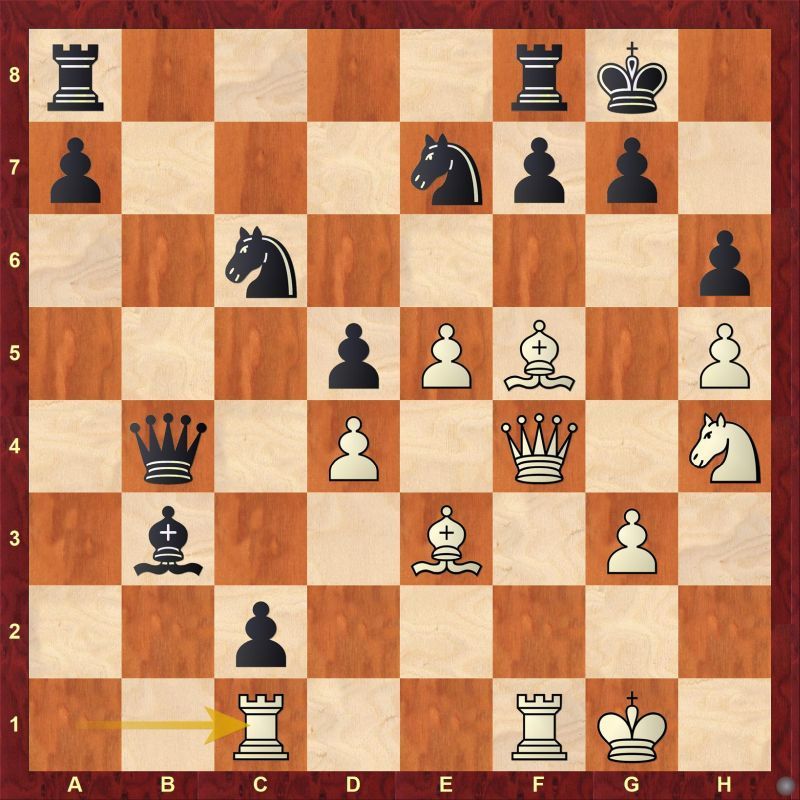 Although c2 is about to fall but black still has another passed pawn on the a-file. 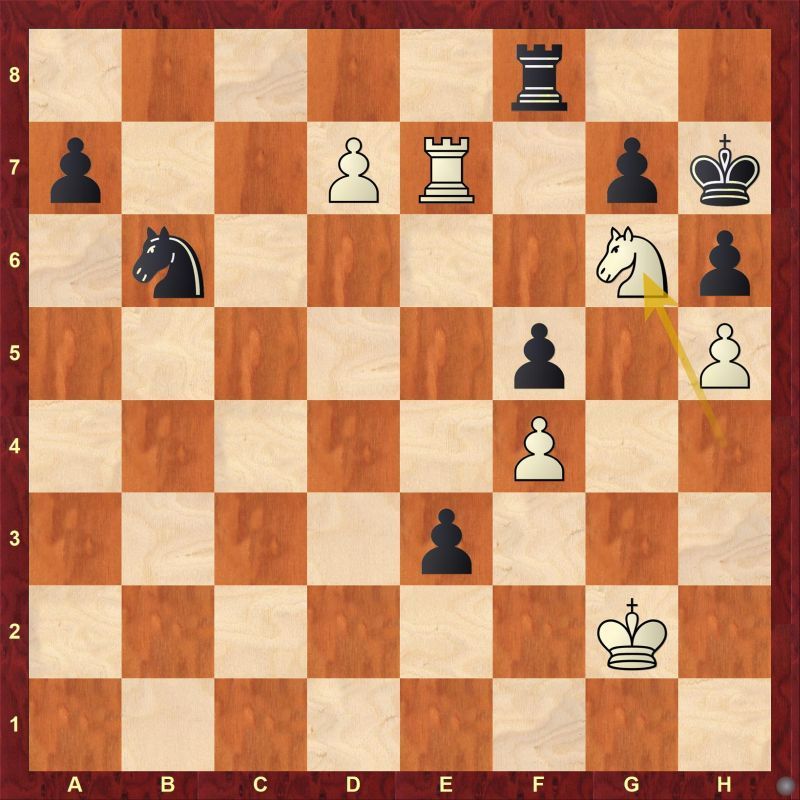 Where should black move his rook and find out what should be white's plan here. Here is where Xiong slipped only time in the game, however the World Champion overlooked it and Xiong managed to split the point. 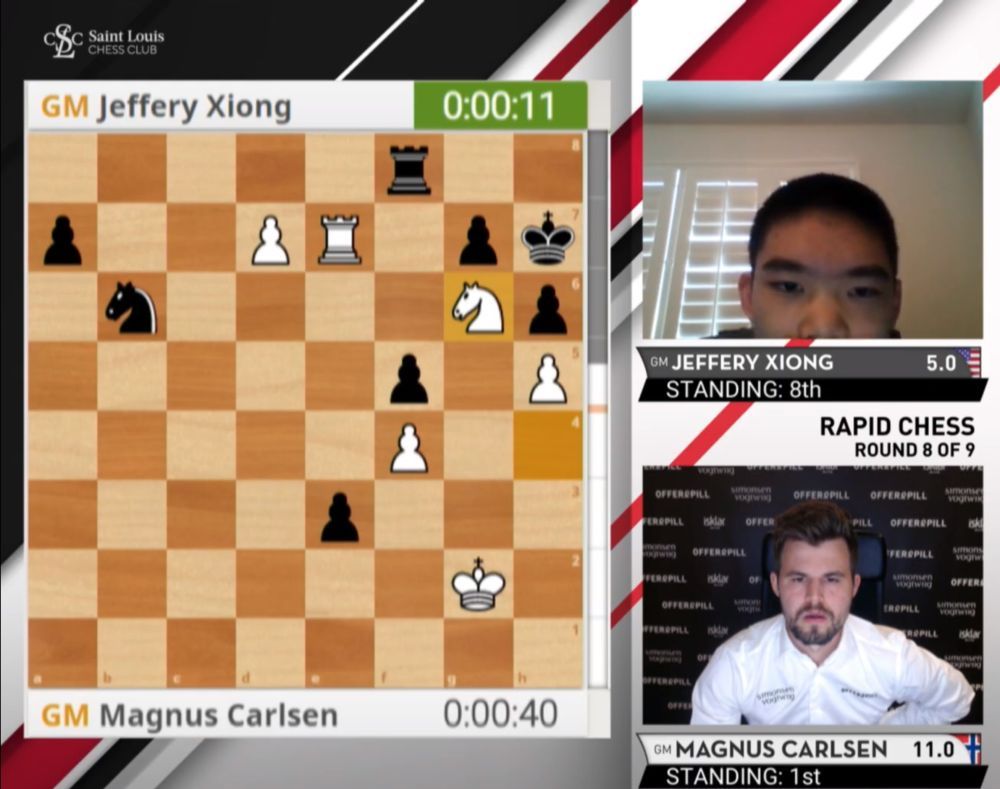 Xiong can be happy about this game and the result too | Photo: Saint Louis Chess Club

Carlsen tweeted this after the game

Harikrishna made a solid draw against Nakamura. Although at one point in the knight endgame, it seemed like Harikrishna had a decent advantage. 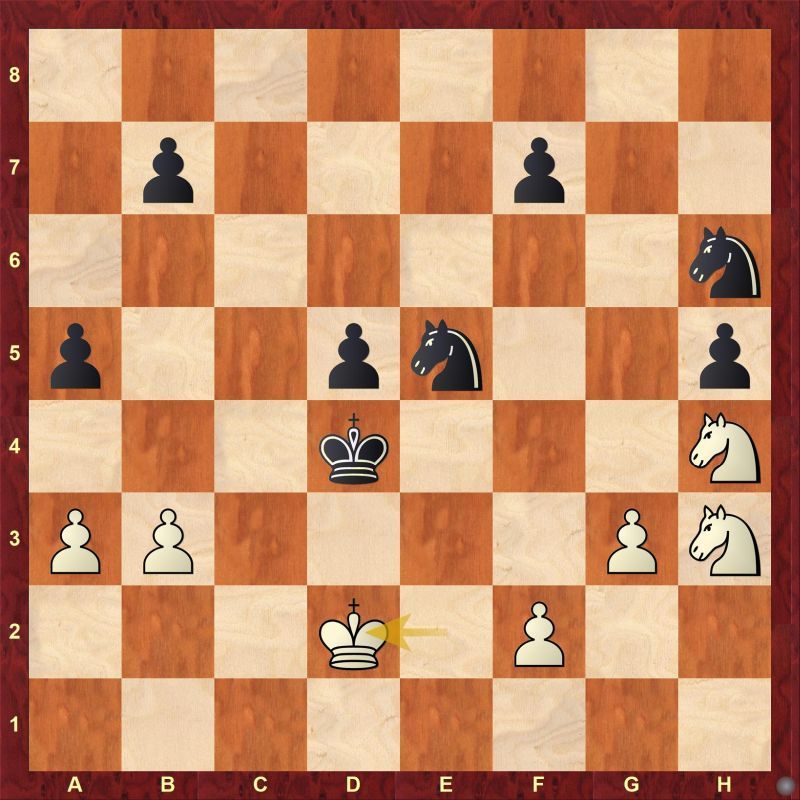 The game continued with 37...a4. However black could have done something else. 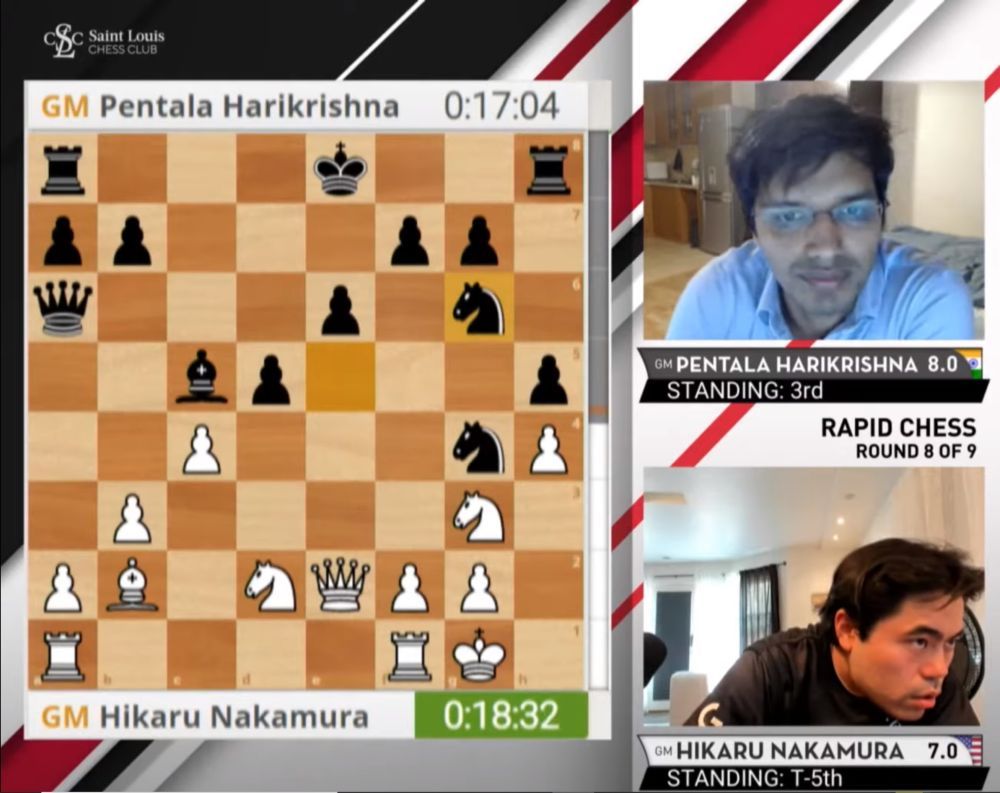 So defeated Aronian with a masterful play in the endgame. 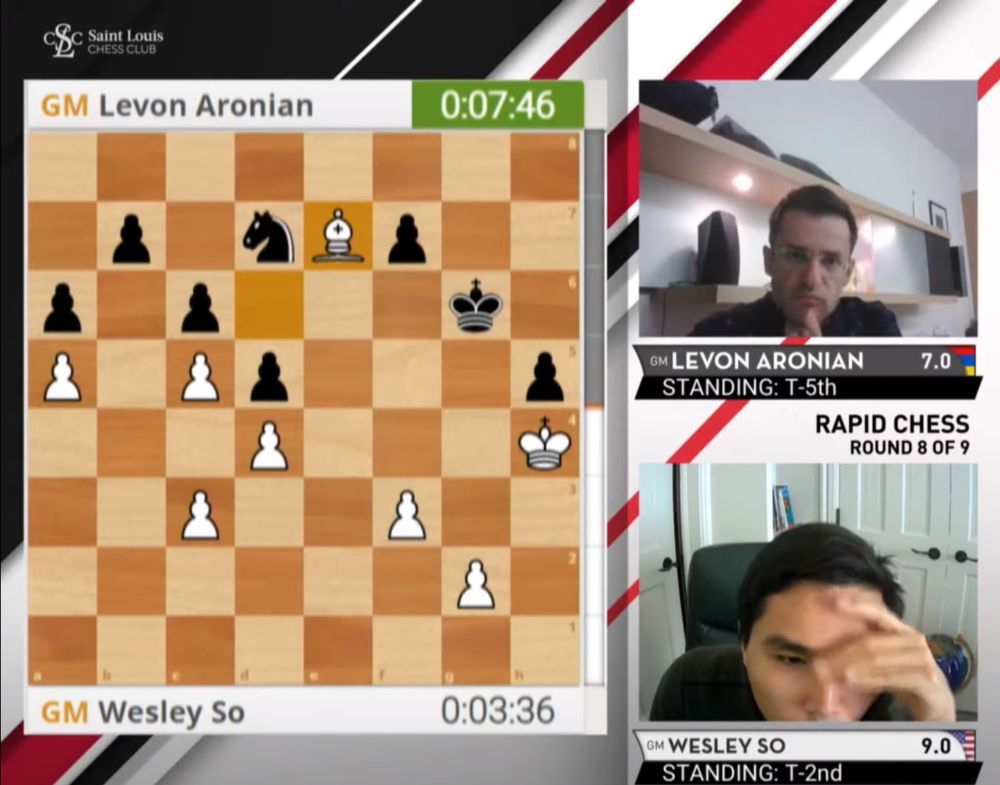 When Aronian realized that it's all over | Photo: Saint Louis Chess Club Live stream

Nepomniachtchi had a blooper against Dominguez as he blundered a piece on 20th move and resigned immediately after his opponent took it. 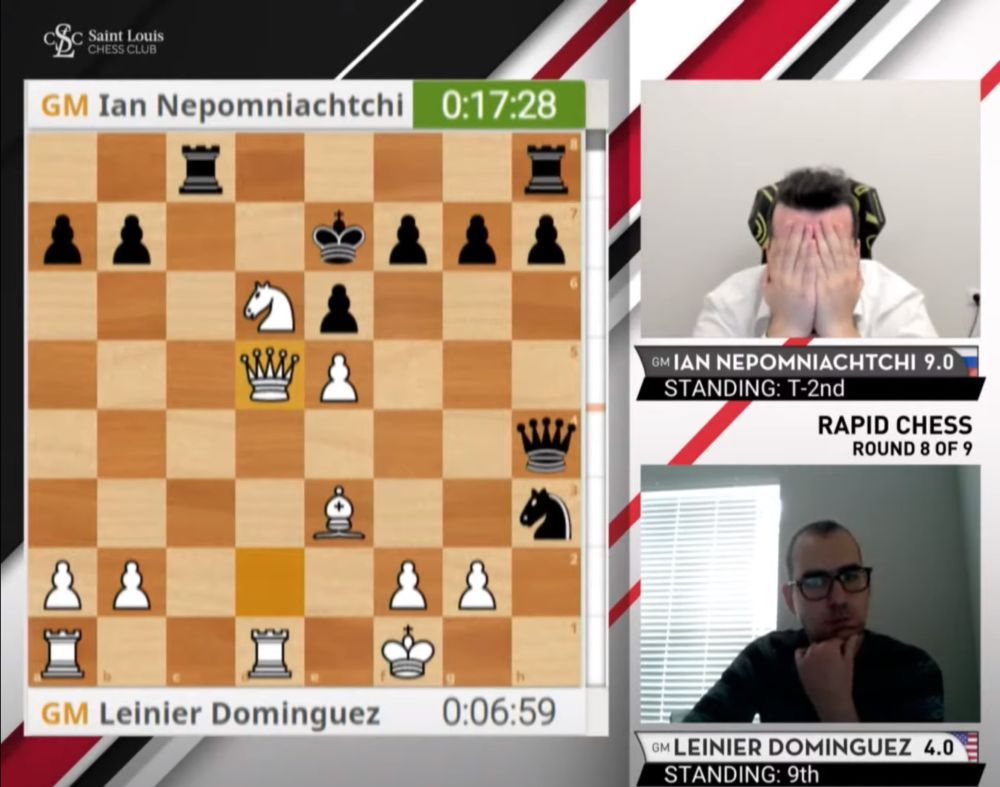 Nepomniachtchi was devastated with the mistake he made | Photo: Saint Louis Chess Club Live stream

Grischuk beat Carlsen in the final round of the Rapid stage as the Dragodorf experiment did not go right for the World Champion. 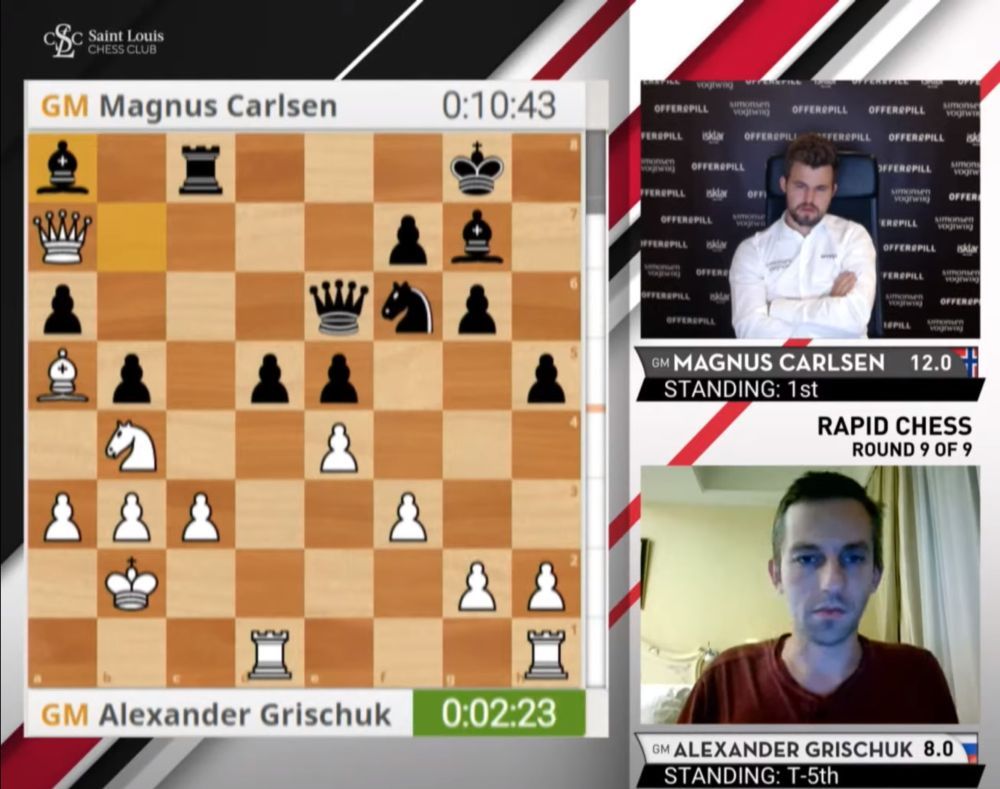 Things did not go the way Carlsen wanted it to be

So beat Harikrishna to take the sole lead at the conclusion of the rapid stage. 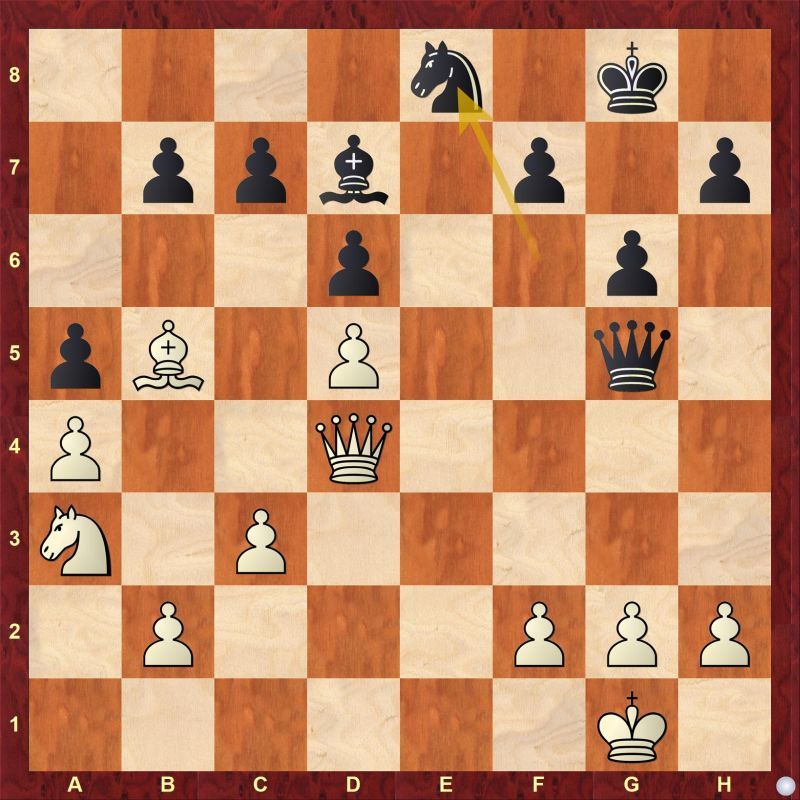 Find out how should white continue here after 22...Nxe8 ?

In case you missed it, Wesley So, in a post-match interview talks about his cat Zanzibar who showed up in the tournament live stream on Day 2.

Standings after Rapid Round 9

• In each rapid game, a win is worth 2 points, a draw is worth 1 point and a loss is worth 0 points.

• In each blitz game, a win is worth 1 point, a draw is worth ½ point and a loss is worth 0 points. Games will not be rated.