Thus far, you might have only heard of Online Blitz Tournaments organised by ChessBase India. But this time, at the conclusion of the Bhopal International Grandmaster Chess Tournament, on the 27th of December 2018, ChessBase India conducted an over the board Blitz Tournament with the support of the organising team of the GM event. The prizes here included software like ChessBase 15 and Fritz 16, along with books and ChessBase Premium accounts. Moreover, the participation of a whopping 191 players which made the tournament a grand success. Mr Kapil Sharma, the Tournament Director of the GM event and his team made the event truly world class while players like RR Laxman, K Rathnakaran and S Nitin brought in the required excitement.

On December 25, last year, while on my way to Bhopal, an idea struck: how about organising a one day blitz tournament in Bhopal! First of all, I discussed this with the team at ChessBase India and then spoke to Mr Kapil Saxena, the Tournament Director of the Bhopal International GM Tournament for his permission to organise the event. The blitz event was announced on the very next day. The intention was to make people aware of the change ChessBase India was bringing about in the country and how players could make the most of it and enhance their play. I was expecting a turnout of at least 50 participants for the Blitz, but to my surprise, 191 players had enrolled for the tournament in just one day! 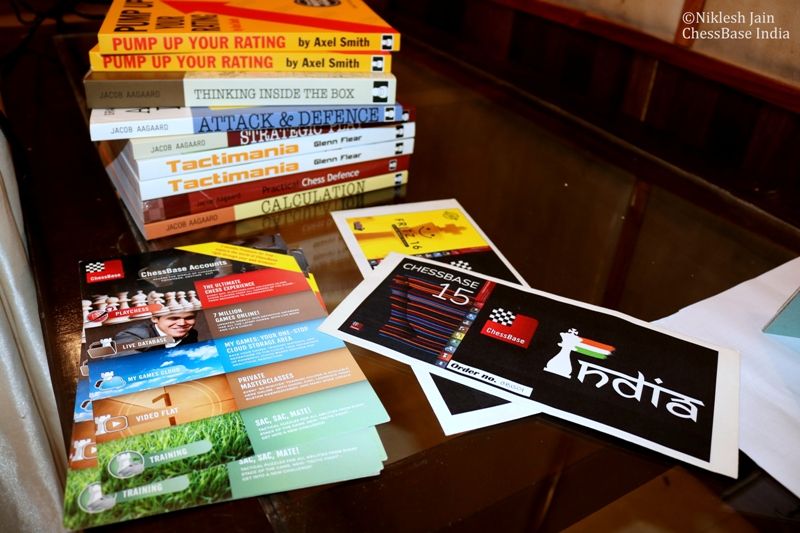 Like for the participants, this tournament and its prizes were a new experience for us 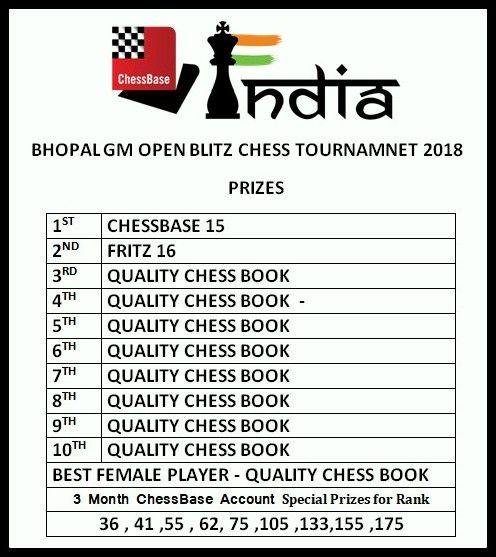 We had divided the prizes in three brackets: software, books and ChessBase Account. This way we ensured that every winner got something to improve his play. 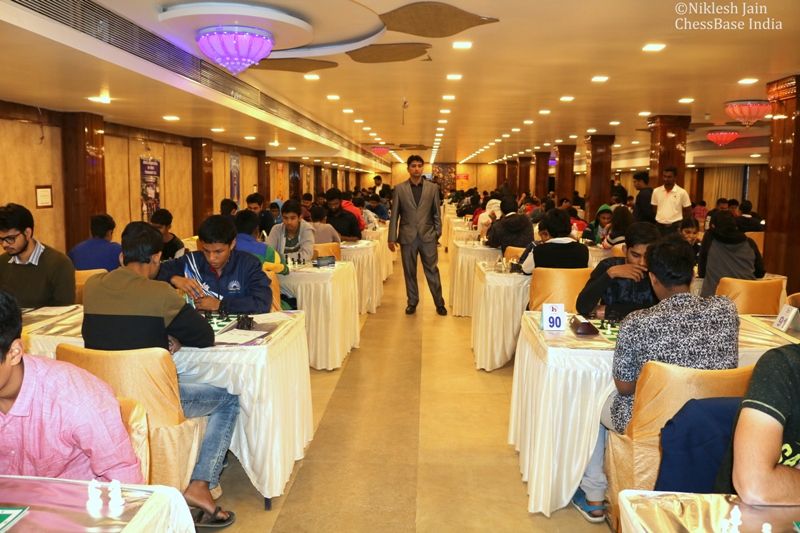 And soon, the players were all set to battle at the ChessBase India Blitz in Hotel Kanta Shravan, Bhopal 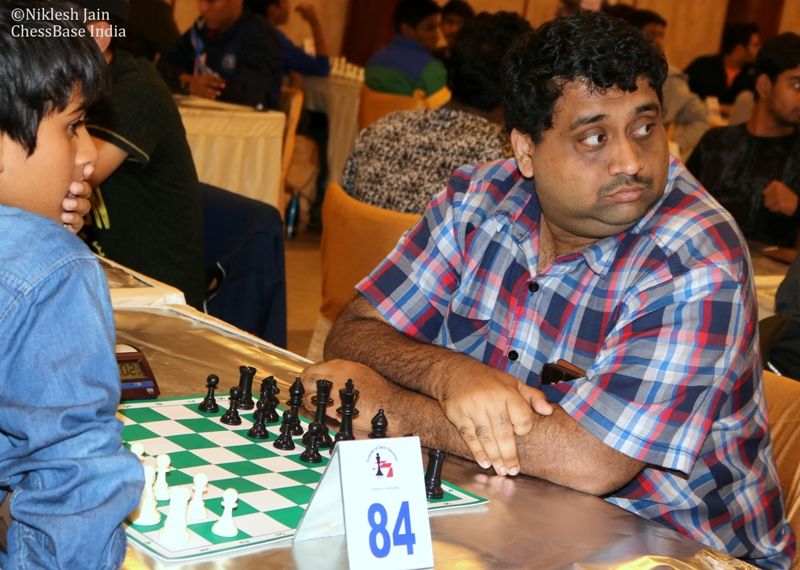 When it comes to quick time controls, GM RR Laxman is known as the Blitz King. But why did he finish second in the final standings? Keep reading to know. 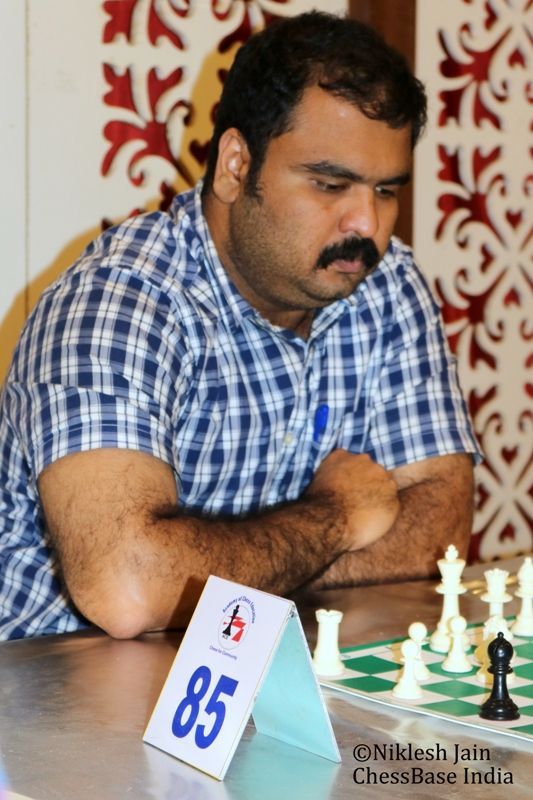 IM Rathnakaran's inclusion in the field made the event all the more exciting and his win over Laxman in round 7 put him at the top of the leaderboard.

The nailbiting ninth round

The tournament had become quite interesting after the first eight rounds. IM Rathnakaran, with a full point's lead over the field, only needed a draw in the finale to seal the first place in his name. In the final round, he was pitted against IM Nitin S while on the second board, GM RR Laxman was paired to play WIM Angela Franco of Columbia.

The results of the final round, changed the leaderboard dramatically. The leader, Rathnakaran, and his chasers, Laxman and Nitin, all finished on 8.0/9 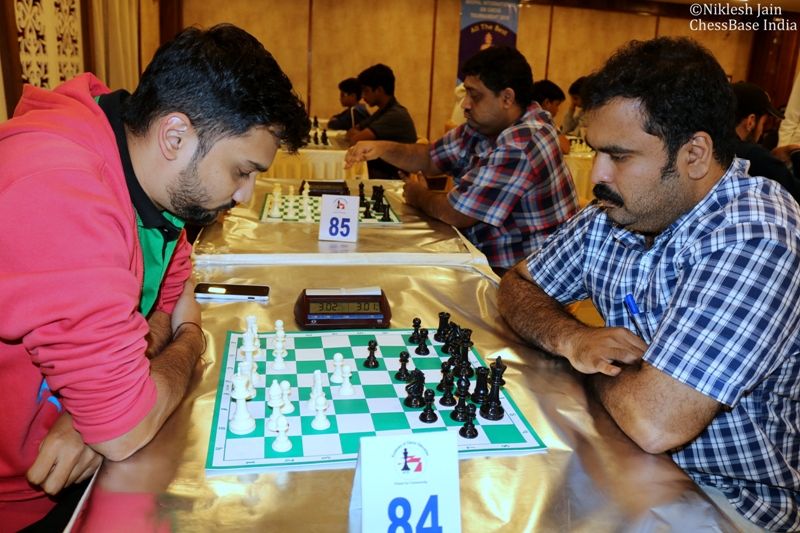 While Nitin defeated Rathnakaran spectacularly in an endgame... 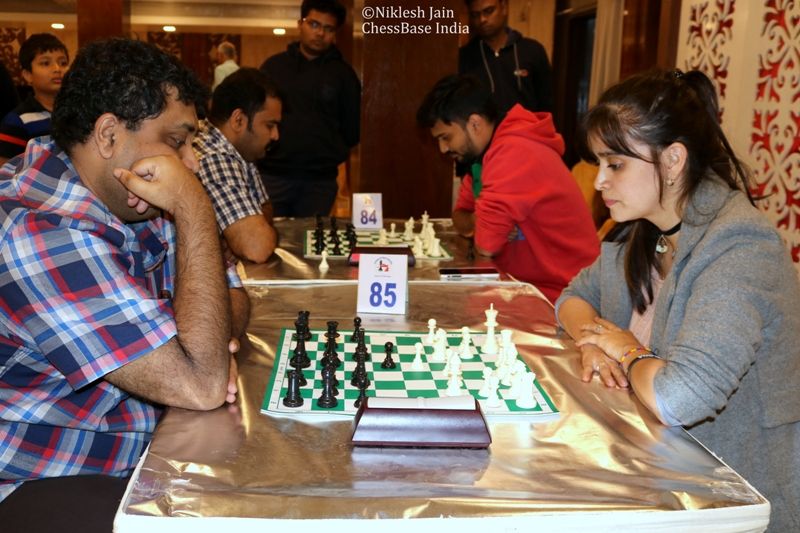 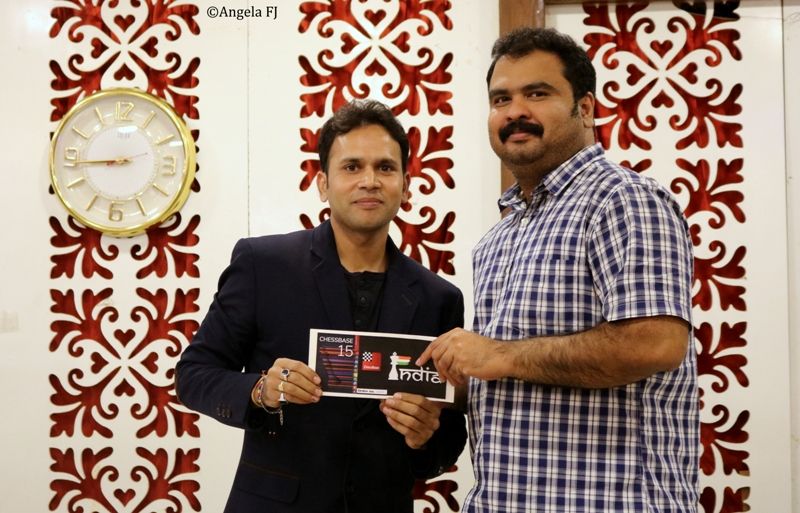 Rathnakaran, who was declared the title winner due to his better tiebreak, took home a brand new DVD of ChessBase 15, which is sure to help him in his chess training

You can also buy yourself a copy of ChessBase 15 to enhance both your playing strength and preparation. If you would like to know more about the features of this latest version of ChessBase, do check out this article by IM Sagar Shah. 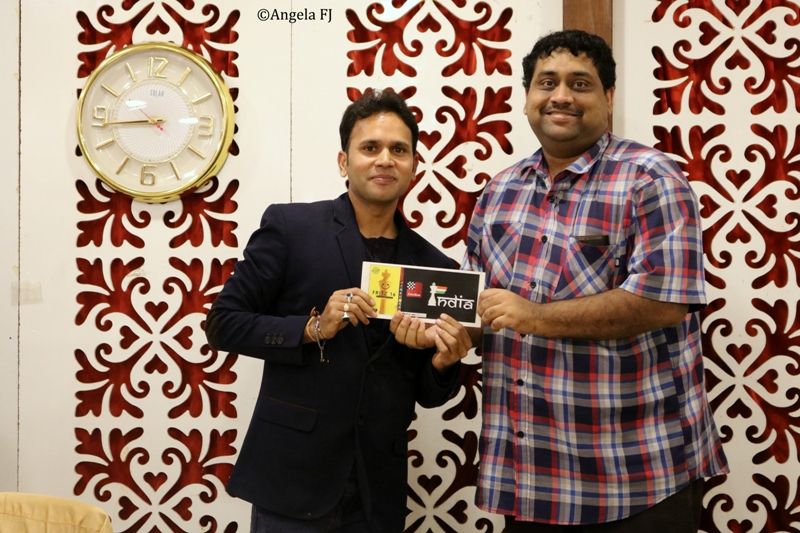 GM Laxman had little to be upset about finishing second. After the tournament, he said,"I had wanted to finish second from the very start." Not that he didn't want to win the tournament, but since he had already bought ChessBase 15, he was aiming to get his hands on Fritz 16, which was the second prize. 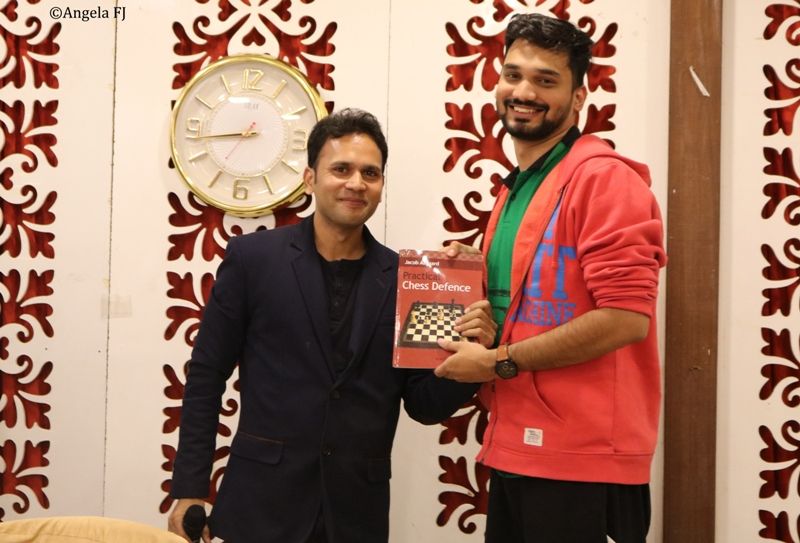 S Nitin, despite defeating the tournament leader, Rathnakaran in the final round, had to be content with the third place because of his lower tiebreak. As his prize, he took home Jacob Aagard's 'Practical Chess Defence'.
The three winners talk about the tournament and ChessBase India's efforts to popularize chess 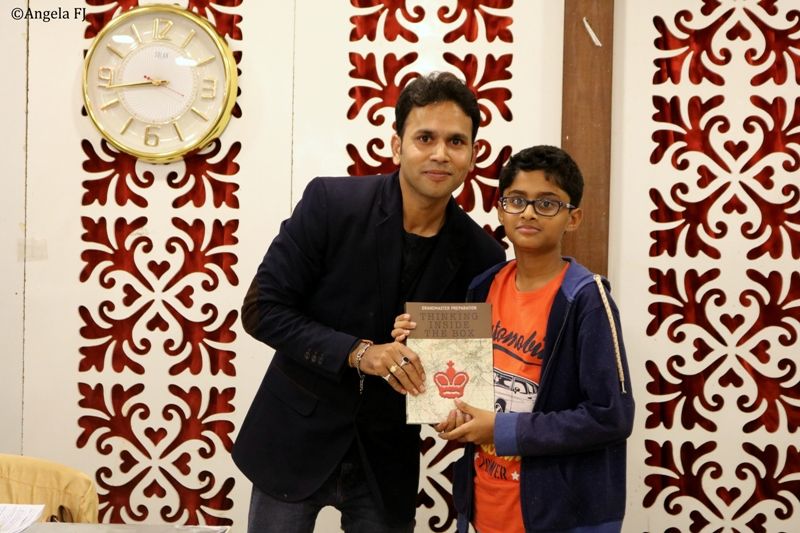 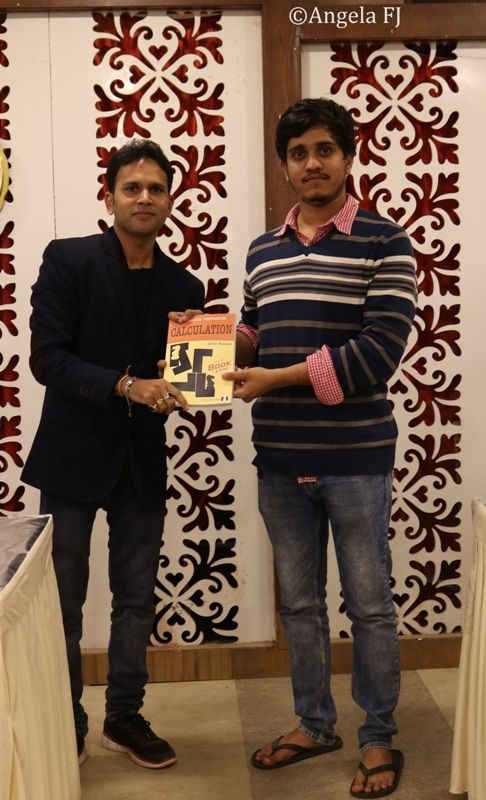 With a score of 7.0/9 and the best tiebreak score, Vedant Pimpalkhare took the fifth place and won the book 'Calculation' 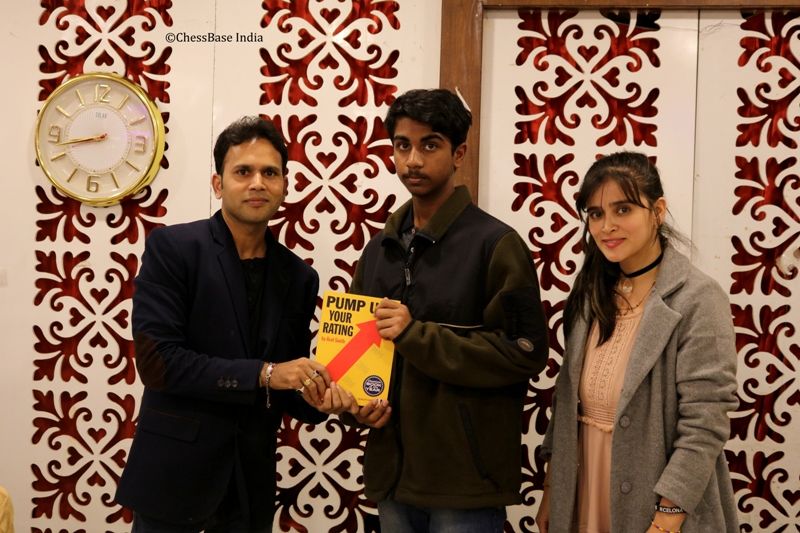 For his sixth place finish, Alan Diviyaraj won the book 'Pump up your rating' 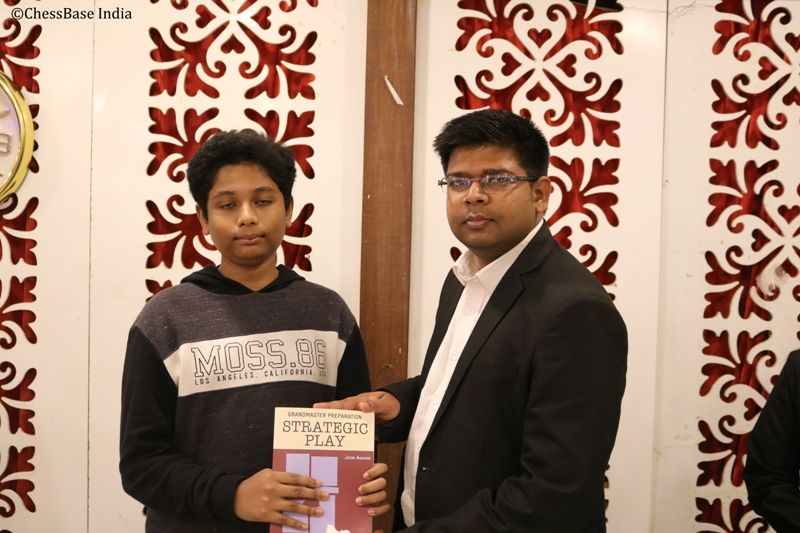 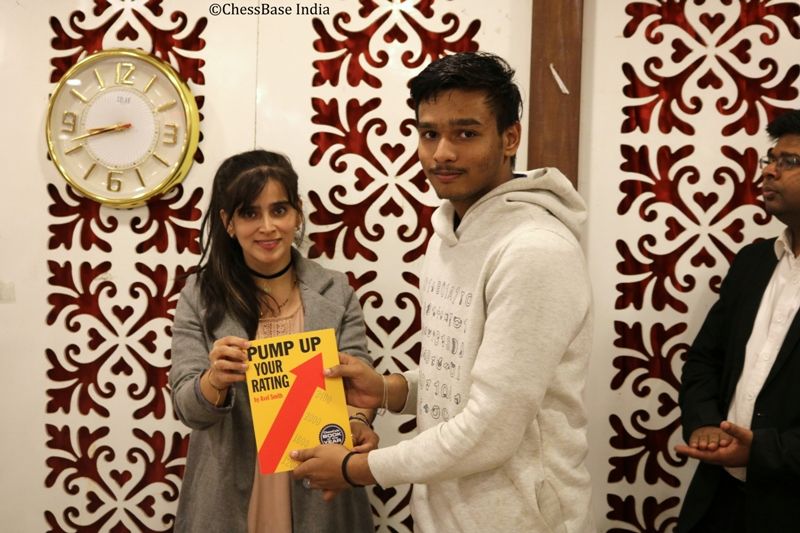 Raahul VS, who finished eighth in the final standings, was also presented a copy of 'Pump up your rating' as his prize by WIM Angela Franco 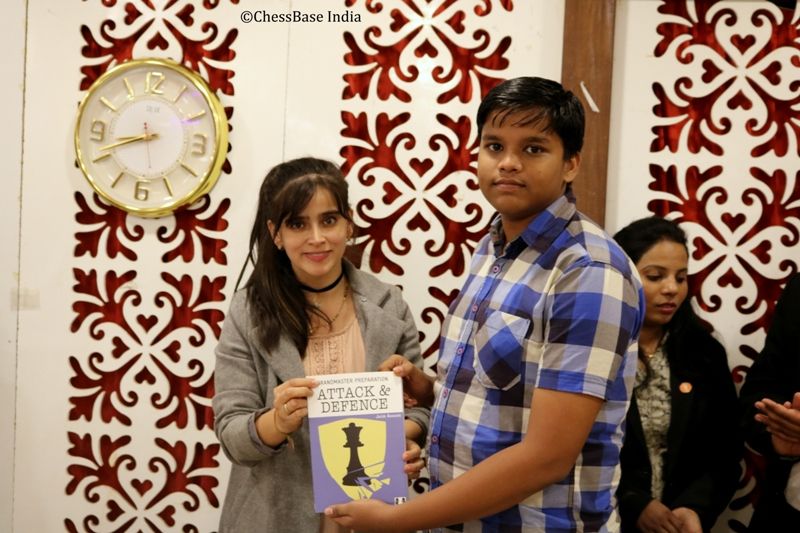 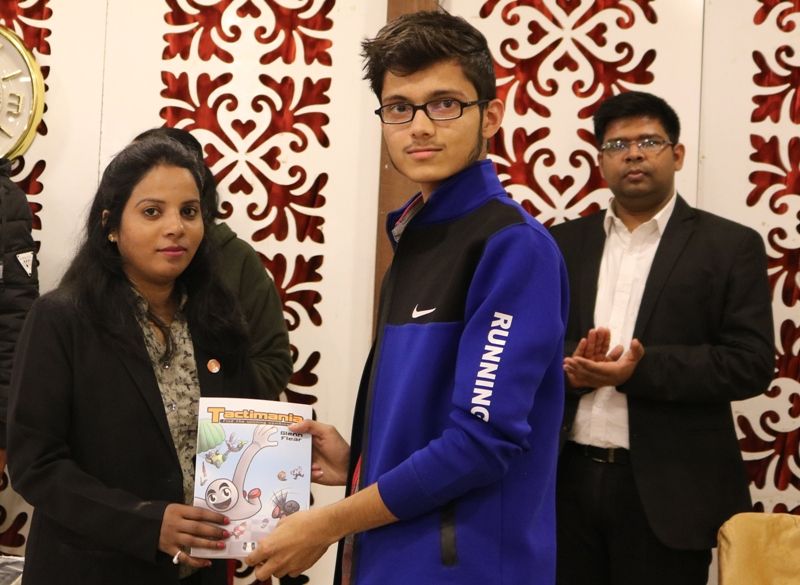 Indrajeet Mahindrakar bagged the 10th prize and was awarded a copy of Glen Flear's 'Tactimania'. 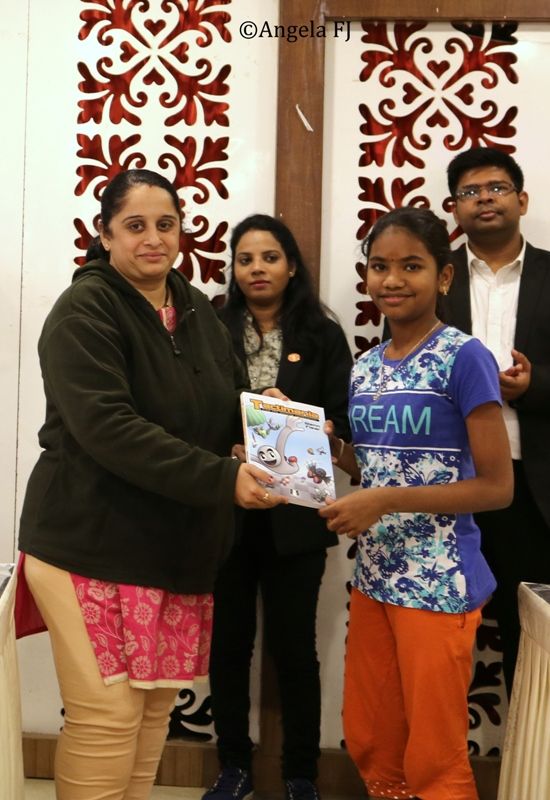 World Under 12 Girls' Champion, Savitha Shri B won the Best Woman prize and also received a copy of 'Tactimania' 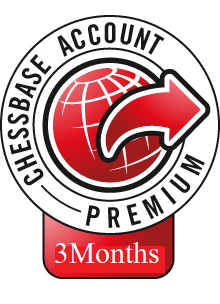 You could also become a ChessBase account premium member and make the most of all that is offered. Watch this video to know about the benefits of a ChessBase premium account. 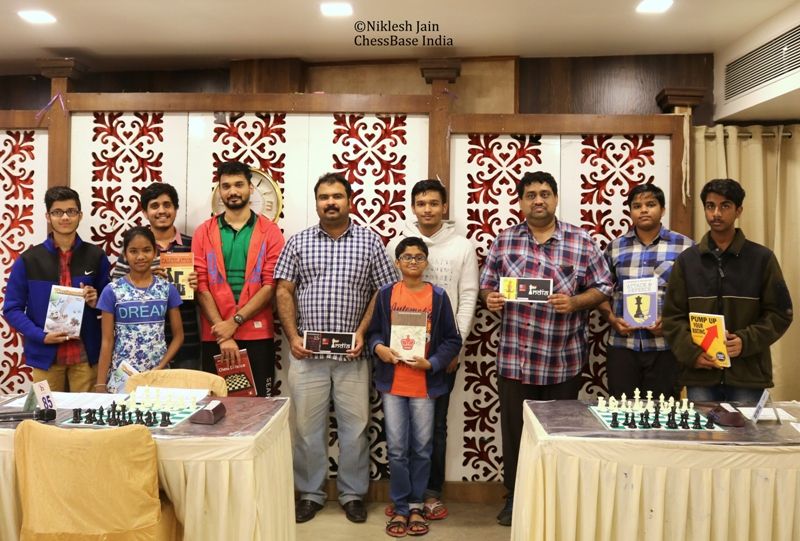 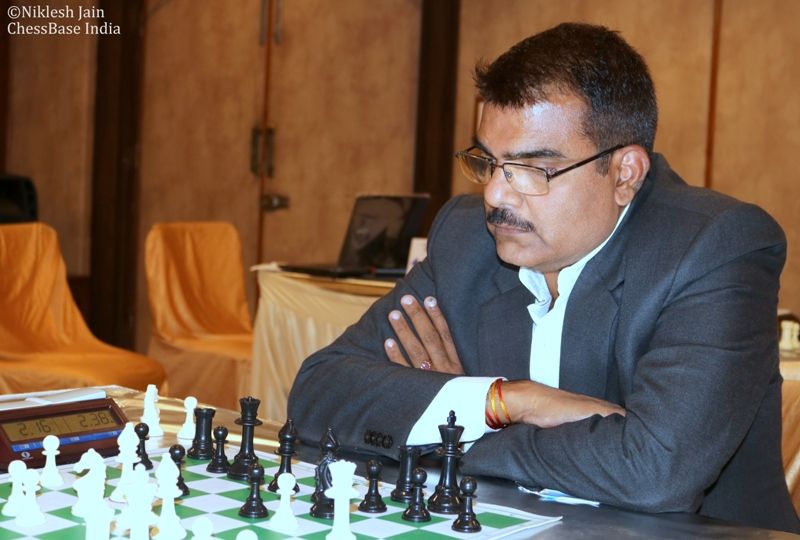 Mr Kapil Sharma, the Tournament Director of the Bhopal International, supported us in every way to make this event a huge success. He not only gave us the permission to conduct the event but also helped out with all the required arrangements. 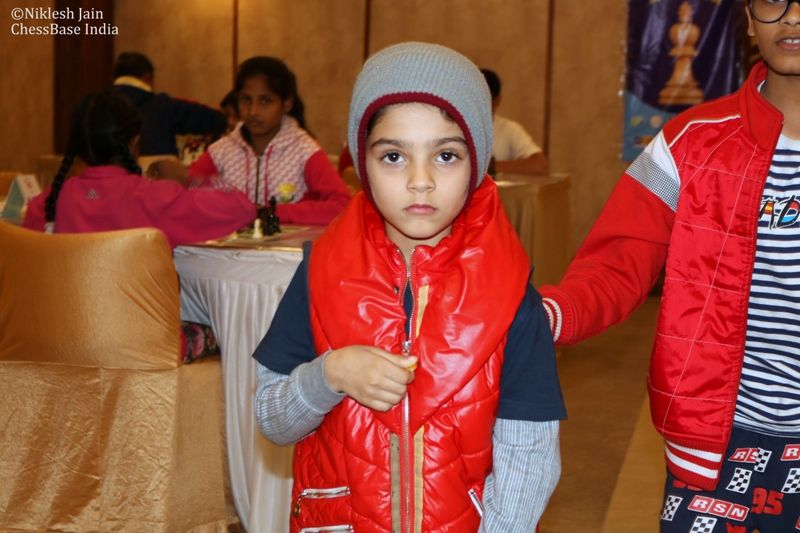 The tournament was enjoyed by all -- even little kids. And this is what made it so special

**Note to tournament organisers: If you would also like to conduct a ChessBase India Blitz tournament at your event, feel welcomed to get in touch with us on chessbaseindia@gmail.com

Translation from Hindi by Aditya Pai