The year's third major closed event, the Grenke Chess Classic, is poised to a spectacular start, featuring a fierce field that blends experience, youth and promise. Magnus Carlsen will be the top seed of the event while Fabiano Caruana, his erstwhile world title challenger, will take second on the starting rank. Other big names from the field include Levon Aronian, Maxime Vachier-Lagrave, Peter Svidler, etc. Viswanathan Anand, the only Indian in the fray, will begin as the third seed and would be eyeing his first big win of the year after lukewarm results at the Tata Steel and Shamkir. The field also features Vincent Keymer, the 14-year-old German IM who stunned the world by winning the title in the open last year. If all of this wasn't enough, Carlsen and Caruana will be seen crossing swords across the checkered board for the first time since their World Championship Match here in southwest Germany. Here's a peek into this exciting event.

**This article was originally published on Firstpost

Just weeks after witnessing Magnus Carlsen take Shamkir chess tournament by storm, the elite of the chess world have moved westwards towards the German cities of Karlsruhe and Baden Baden for the next big event of the year, the Grenke Chess Classic.

The event is to be played in a single round-robin format with a time control of 100 minutes for the first 40 moves followed by 50 minutes for the next 20 moves and then another 15 minutes to the end of the game with a 30-second increment from move one. The first five rounds will be played at the Schwarzwaldhalle in Karlsruhe after which the tournament will move to Kulturhaus LA8 in Baden-Baden.

Unlike Shamkir, which was an all-heavyweight clash among 2700+ rated Grandmasters, the field in Grenke features a fine blend of experience, youth and promise. At the top of the field is the reigning world champion, Magnus Carlsen, who is followed by his erstwhile world title challenger and the tournament’s defending champion, Fabiano Caruana; the mighty Madras Tiger, Vishy Anand; the French number one, Maxime Vachier-Lagrave; and the Armenian superstar, Levon Aronian. Some of the top contenders at Grenke | Photos: Amruta Mokal

There is also the 14-year-old IM Vincent Keymar, who has made it to the premier leg of the event by winning the Grenke Open in the previous edition. Leaving aside the fact that he is only fourteen, Keymer’s win at the open is no mean feat even for the standards of a seasoned grandmaster. The German lad had finished ahead of world-class players like Richard Rapport, Wang Hao and Anton Korobov. 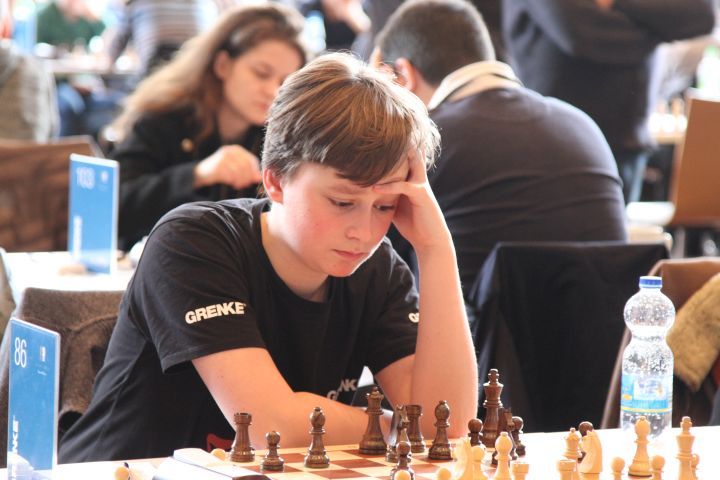 And then there is the top German GM Georg Meier. Although the local star is not quite up there with the top guns of the event in terms of rating, he is surely capable of giving any opponent a run for his money. Last year, he was a heartbeat away from bringing down Magnus but had to settle for a draw after missing some niceties in a critical variation.

For Magnus, of course, this will be another chance to show that he reigns with an iron fist. He has already won the first two major events of the year in Wijk aan Zee and Shamkir, and would definitely be eyeing his third straight title after having retained his world title in November last year. Moreover, having shown such wonderful form this year, he is inching closer to his all-time high of Elo 2882. After his mind-boggling show in Shamkir where he finished with a rating performance of almost 3000(!), Magnus’ live rating has shot up to 2860.8. With the goal of breaking his own rating record in sight, raking rating points will be an added incentive for the world champ to try and win the event.

Caruana will be coming to Germany after narrowly missing out on winning the US Chess Championship, which Nakamura clinched with his final round victory. But here at Grenke, he is the defending champion. Last year, he had won the Classic being a full point ahead of his nearest rival and the world champ, Magnus Carlsen. If he does manage to bag another title, he will become the first player to have won the Classic more than once. In its five prior editions, the tournament has seen a different winner every time. And hence, Anand, Naiditsch, Carlsen and Aronian will have the same opportunity.

The only Indian in the fray, Vishy Anand, is ranked third on the starting rank. While he has had moderate successes in the last two major events – finishing fifth at Tata Steel and sixth at Shamkir – he is still to score a major win this year. At Tata Steel, he had remained atop the leaderboard well until the tenth round of the tournament, when Carlsen got the better of him after six-hour-long grind. If Anand could avoid such a mishap this time around, he is sure to score big in Karlsruhe and Baden Baden. 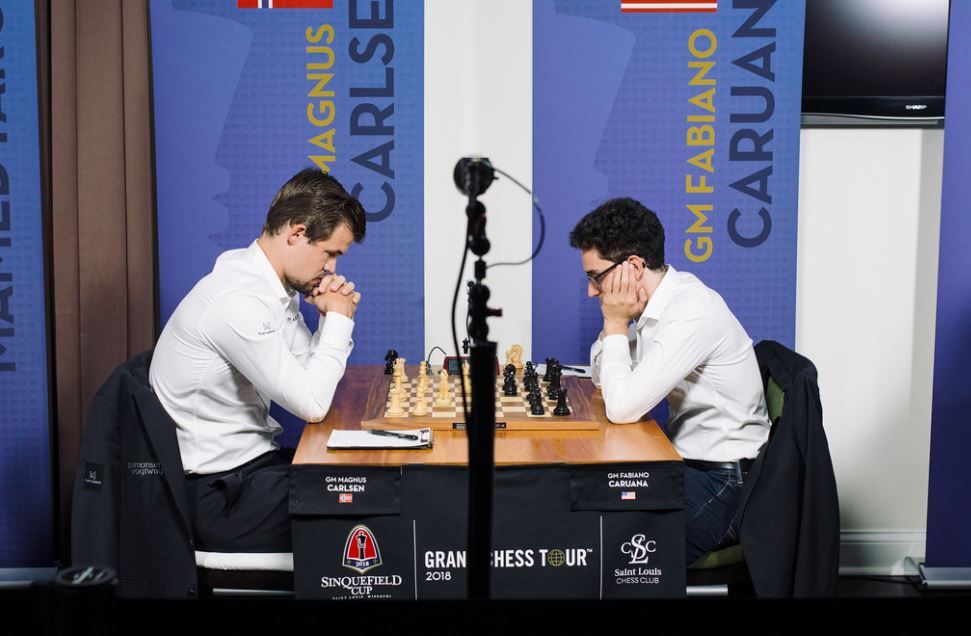 Carlsen vs Caruana will be one of the top encounters of the event | Photo: Saint Louis Chess Club / Austin Fuller

Another highlight of the tournament will be the bout between Carlsen and Caruana. Last year, this was the event where the duo had played their last classical game before their world championship match. And as fate was to have it, they will see each other across the board for the first time after their title clash in the very same place. In which round they will play is still to be seen as the pairings will be decided after the drawing of lots on the first day.

Besides, there are also world-renowned grandmasters like the eight-time Russian champion, Peter Svidler, GM Arkadij Naiditsch and GM Francisco Vallejo Pons. What result the clashes between the very elite and the extremely talented will bring is hard to guess. While Carlsen is, indeed, a favourite to win the tournament, the field is fierce. So will Caruana successfully defend his title, will Vishy score his first big win of the year, or will it be another ‘Magnus Opus’? Only time will tell. But the tale will surely be an exciting one.

Pairings for the event/ Games begin at 18.30 hours IST